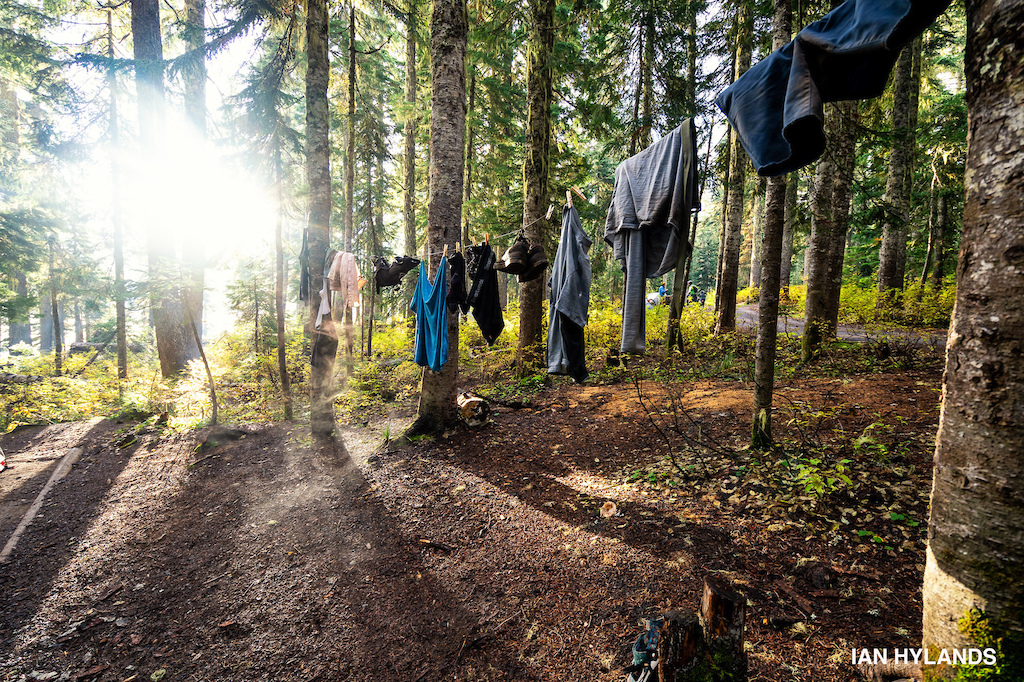 “It’s not going to be warm and it’s going to be wet.” The weather report that Tommy Magrath, Director of Logistic, delivered the night before was still ringing in the ears of the racers as they rolled out of basecamp on Day 2. Headed for stages 5, 6, and 7, they were promised cold temperatures, mixed precipitation, and more incredible trails.

From basecamp to the start of Stage 5, racers had a 5.5-mile transfer to the top of Council Bluff that included 1300 feet of elevation – the majority of their climbing for the day – and a sweet little untimed descent into Council Lake. Stage 5 offered 1000 feet of descending with 45 feet of climbing on a gnarly track similar to Day 1, however not quite as steep. 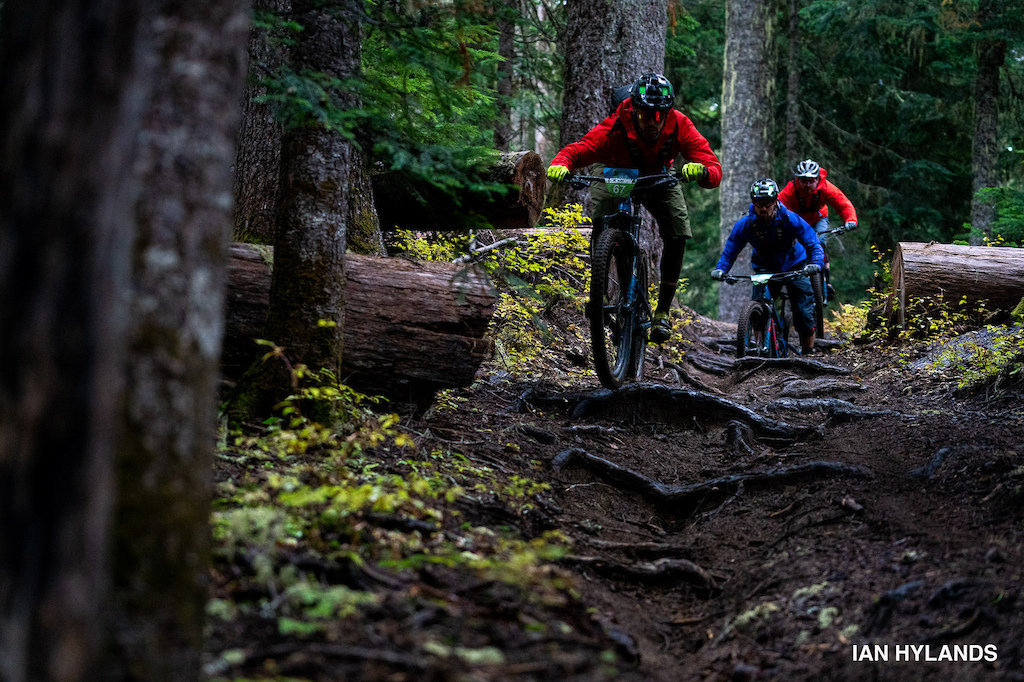 “Stage 5 had a lot of floating roots, that one was super spicy because you would be coming to this little mini stepdown and then just land in a pile of roots,” says Christina Chapetta. “But still, super fun!” 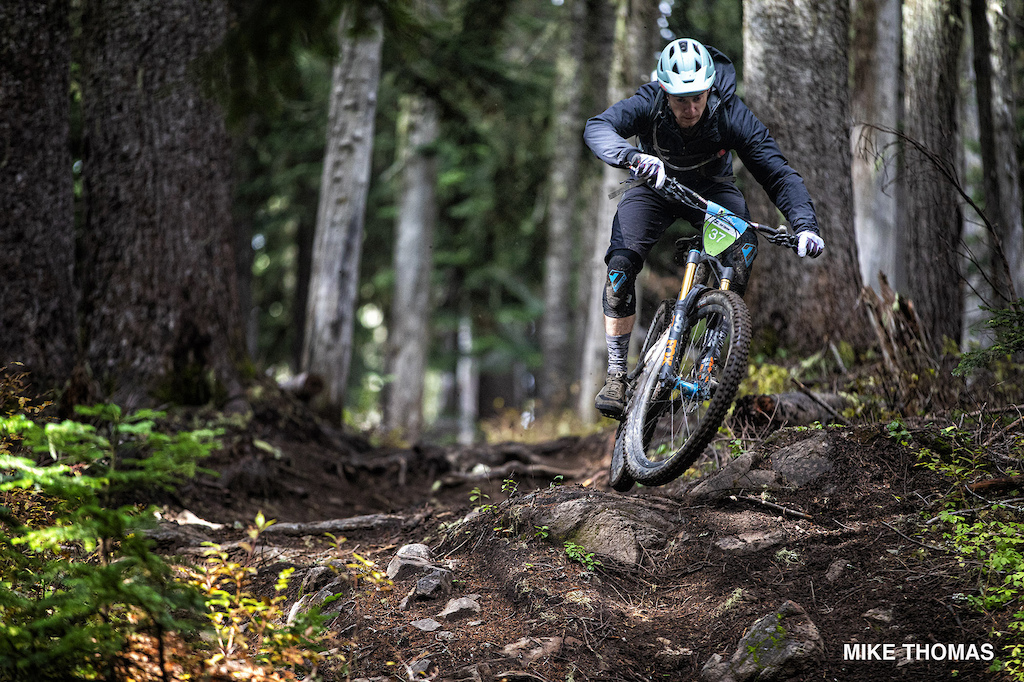 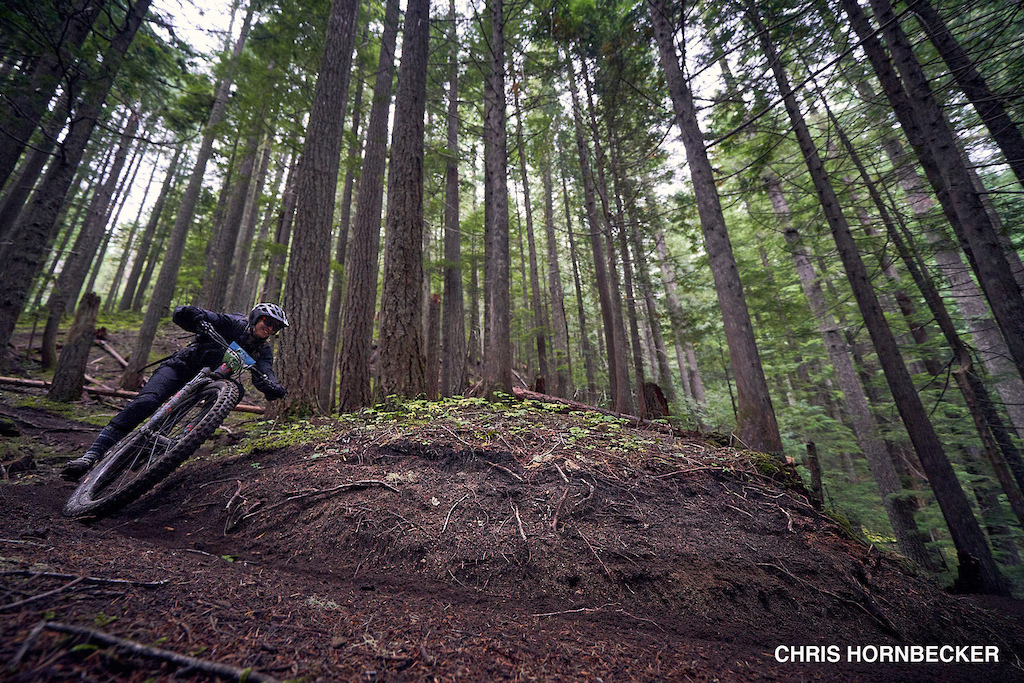 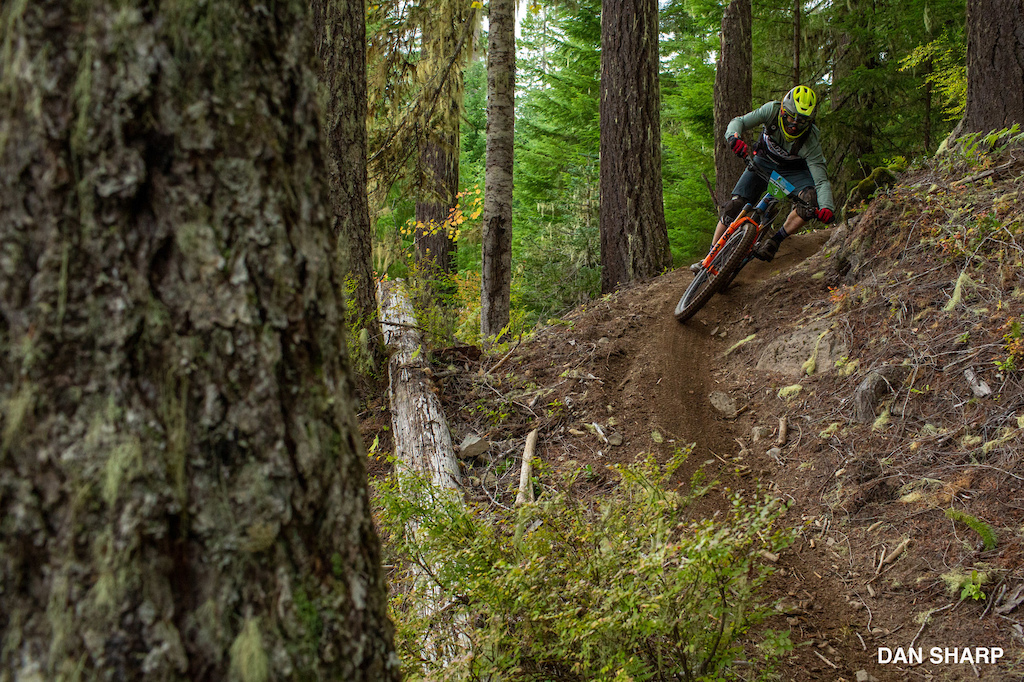 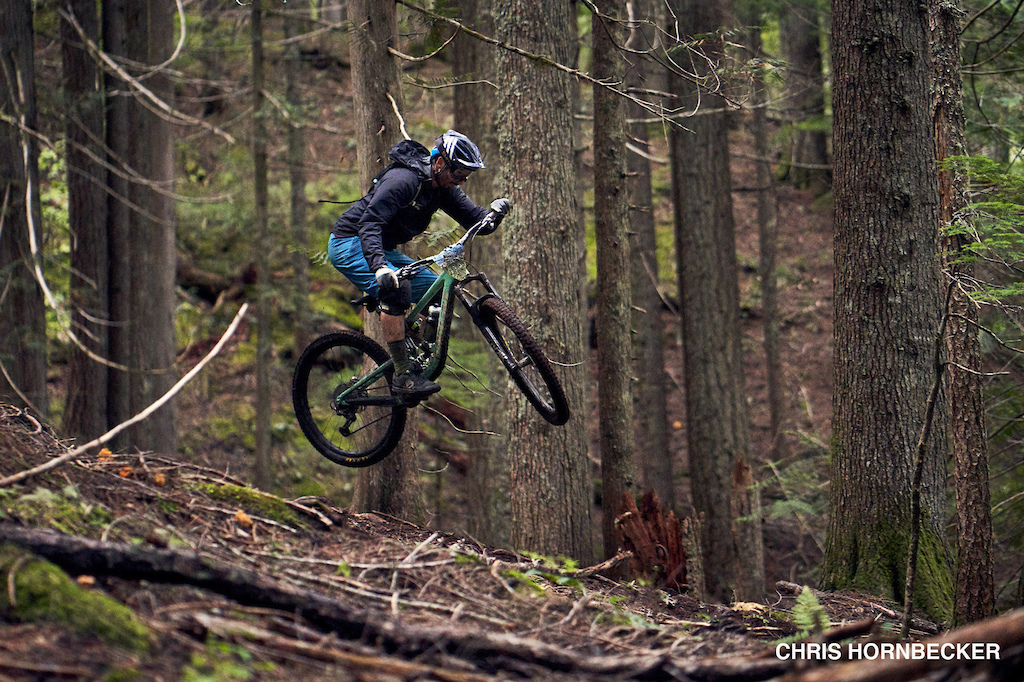 Following Stage 5, racers traversed the ridgeline for 1.5-2 hours to the start of Stage 6. This stage was a solid moto trail with a huge descent, a few punchy climbs, and plenty of line interpretation to be had.


“It was the best party train of the day, there were 6-9 of us, and that one was super good,” says Christina. “Through all the switch backs you could hear the hooting and hollering up the trail. It started to rain part way down that one and that just added to the fun. It was raining hard enough to clear the mud off my glasses.” 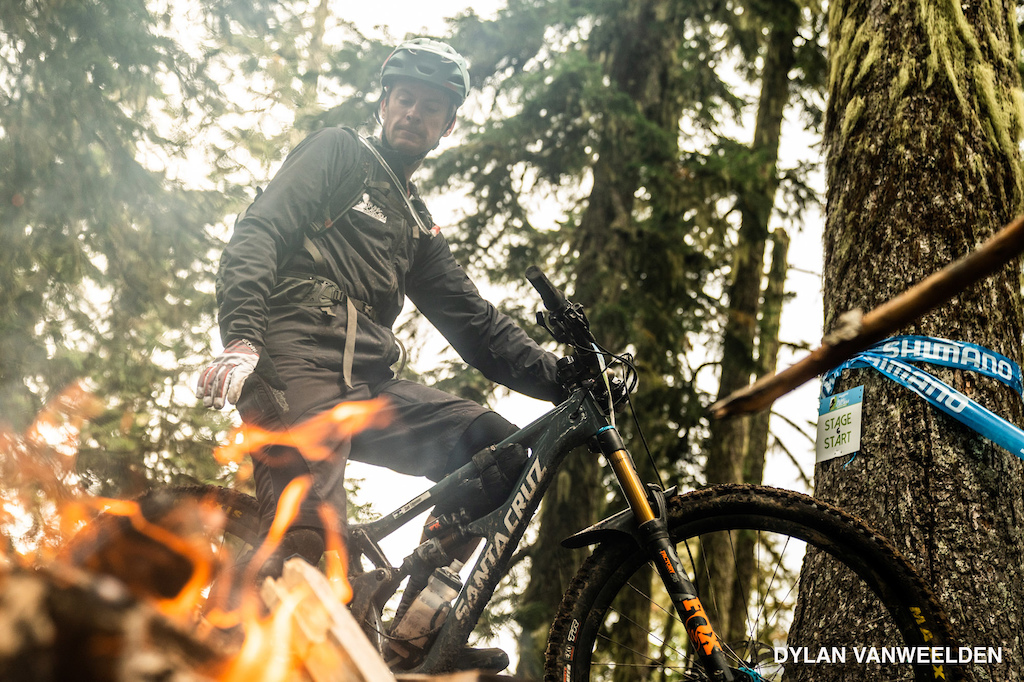 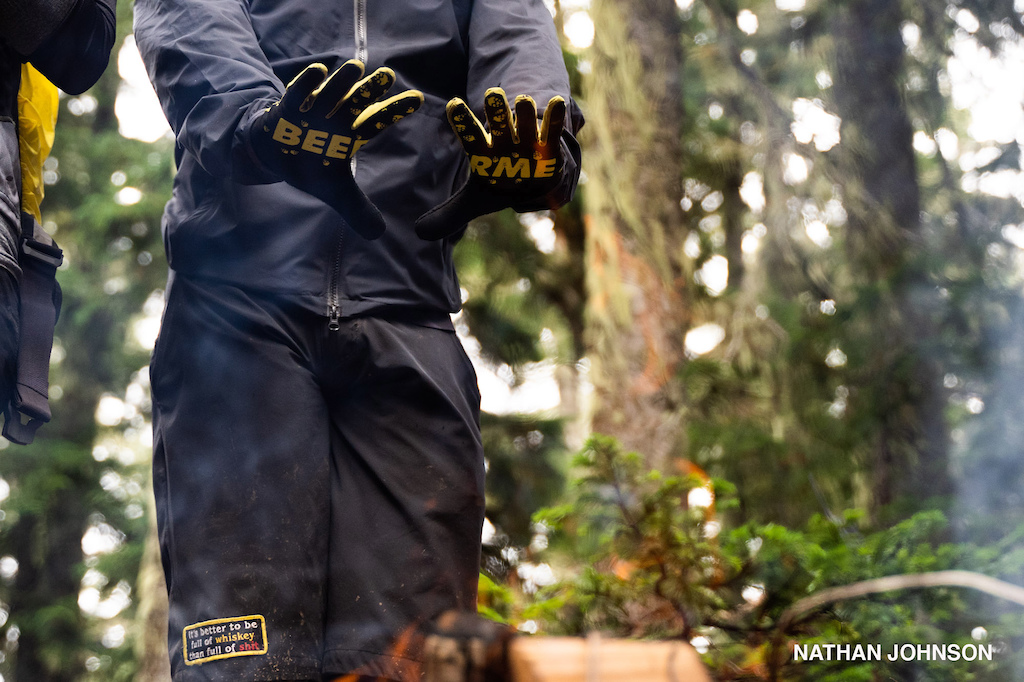 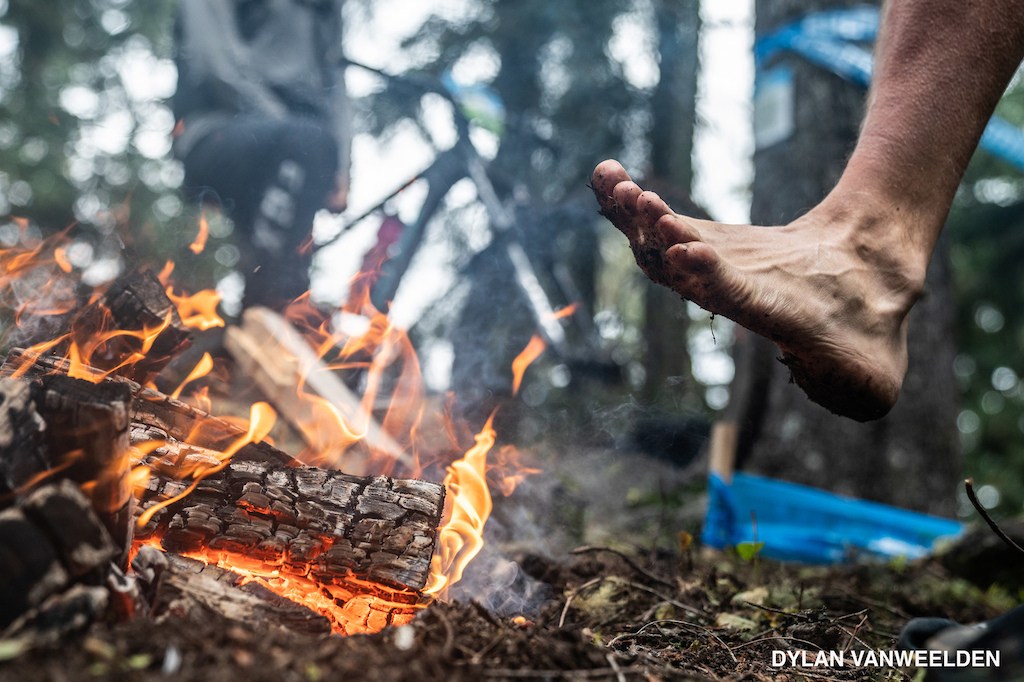 Race Director, Nick Gibson, addressed the subject of party trains the first night at camp. “If you want to ride behind somebody do it. It doesn’t matter if you are in first place or second place, just do whatever you want and have fun. Our rules are peer reviewed, if your peers are going to tell you it’s not cool, then it’s not cool and you’ll be tarred and feathered. Otherwise, it’s a race but have fun.” 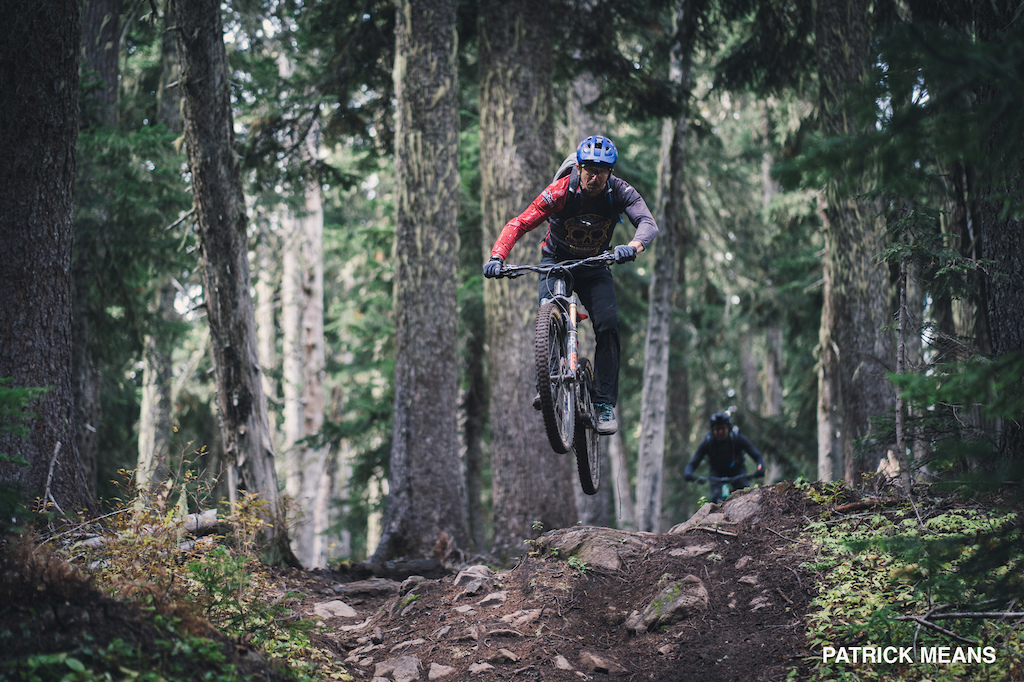 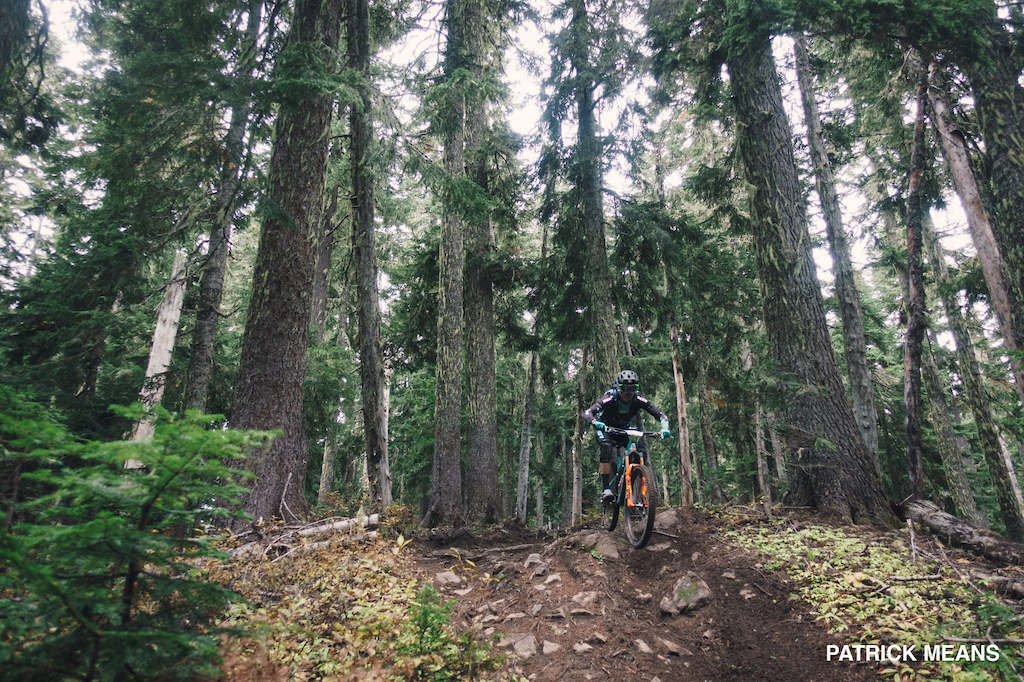 North Vancouver native, Thomas Vanderham, loved Stage 6. “It was everything you look for in a trail; high-speed and lots of line options. Where I live on the North Shore there’s not that much sustain speed. I think that was an 11-minute trail and it just felt like you were going mach speed the whole time. It’s something I don’t get to ride very often, and I was just loving it!” 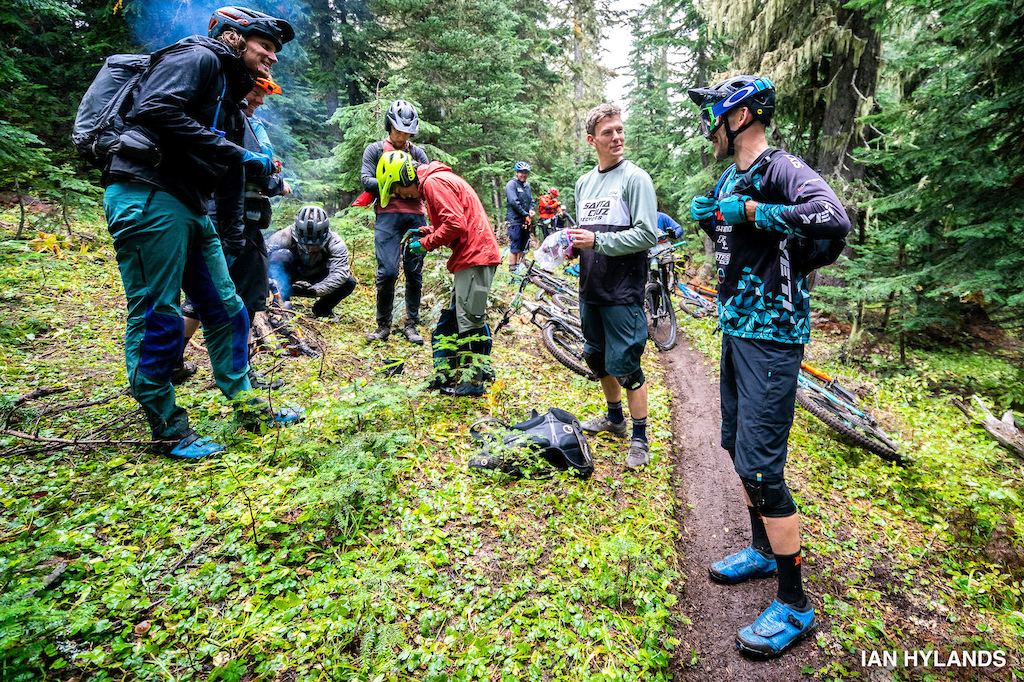 Chris Johnston, who is in second place overall in the pro men’s category after two days of racing, also loved the stage. “Stage 6 today was phenomenal, perfect dirt, I don’t even think there were any rocks out there, just corner, after corner, after corner,” he says. “We were treated to some quality trails out there today and that was really run.” 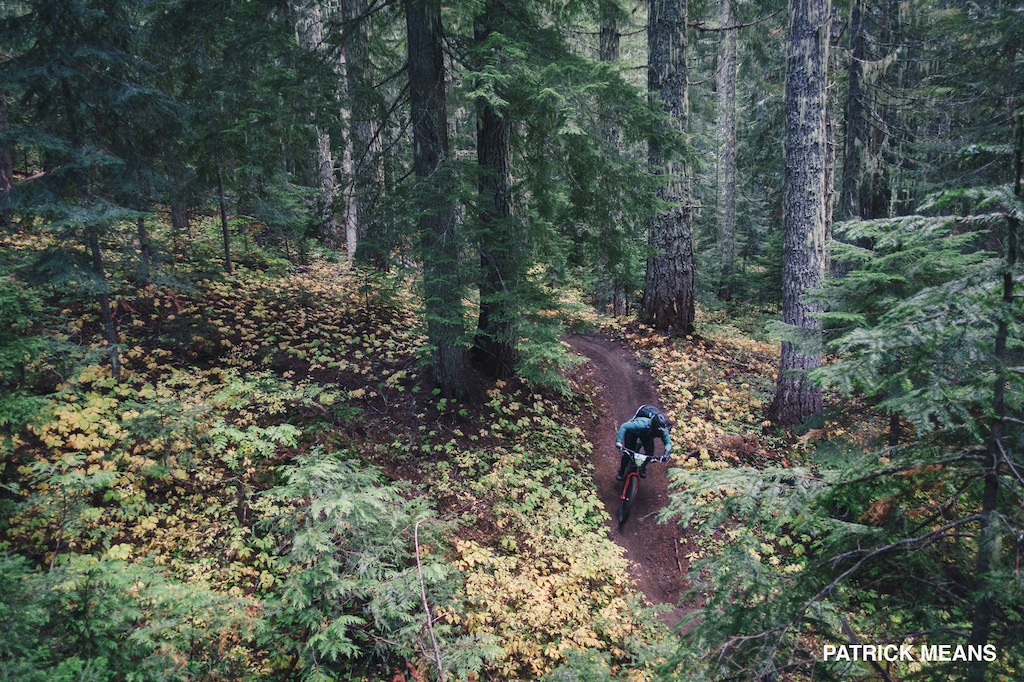 Racers were greeted at the bottom of Stage 6 with a hot lunch and beverages. From there, they loaded into shuttles and got a lift part of the way to Stage 7. From the drop off point, they had a 20-minute hike-a-bike followed by roughly an hour of trail riding to the start of the next stage. Stage 7 was a massive descent that felt like a downhill track; wide, rooty, steep and fun. 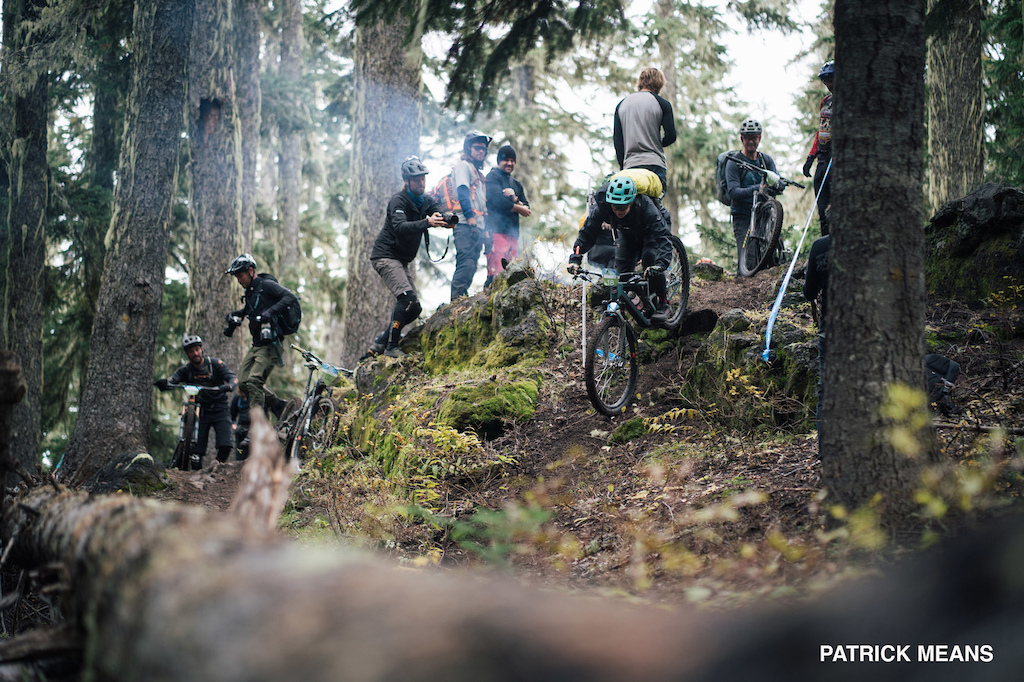 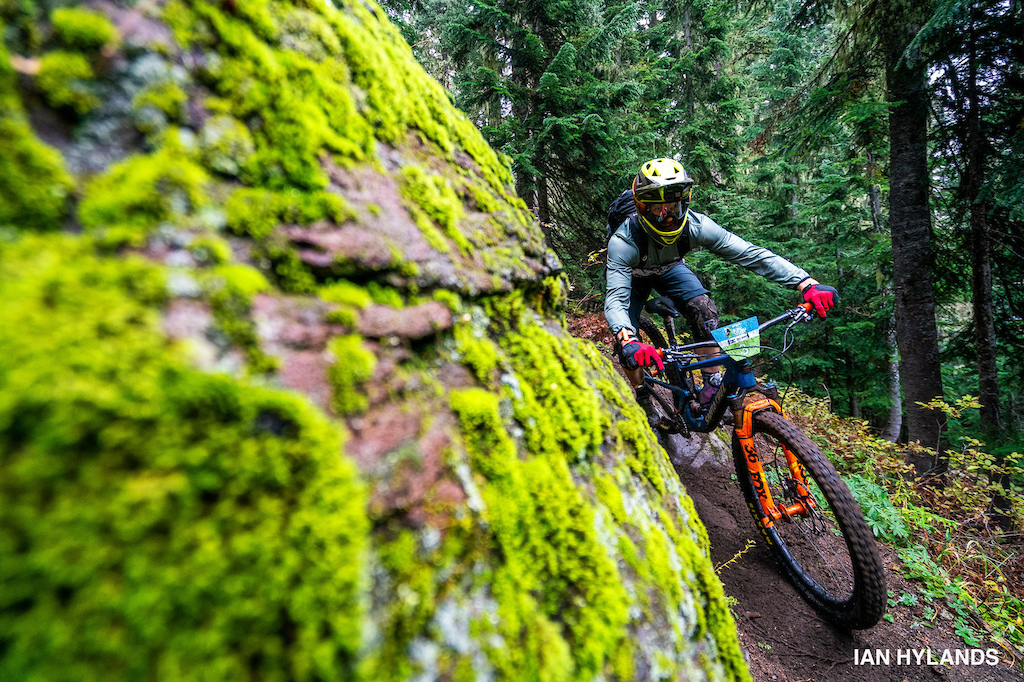 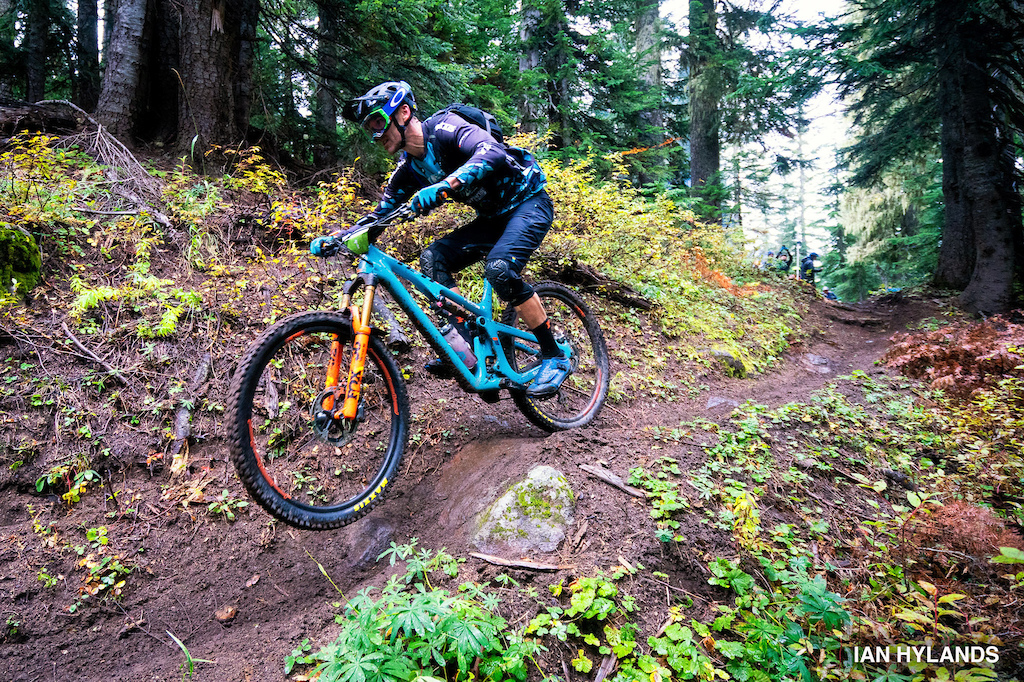 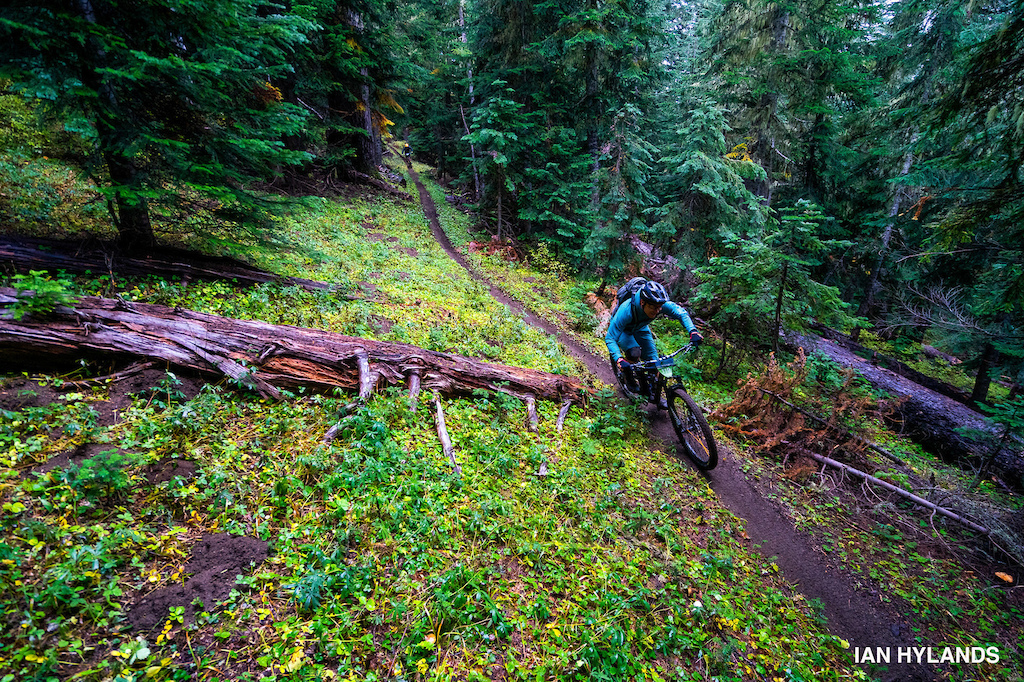 While many of the racers favored Stage 6 today, Deb Motcsh from France was partial to Stage 7. “I like when it’s a bit technical,” she says. “I’m not used to riding flowy and fast tracks, so when it’s slow and technical, I like it. It was really long, and it had perfect dirt and it was really fun to play on this trail.” 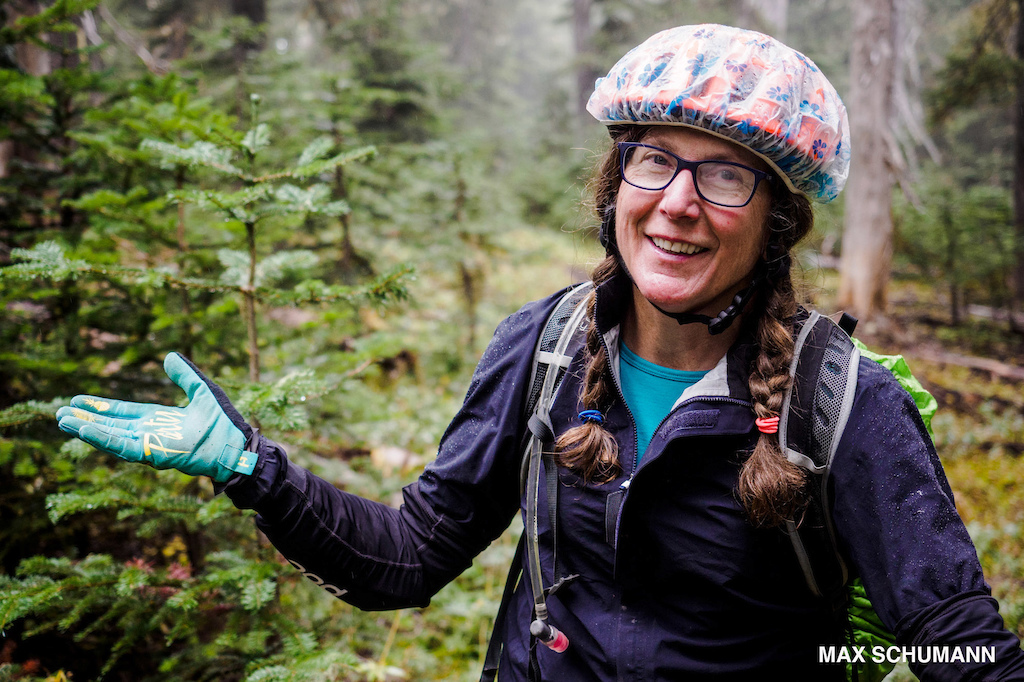 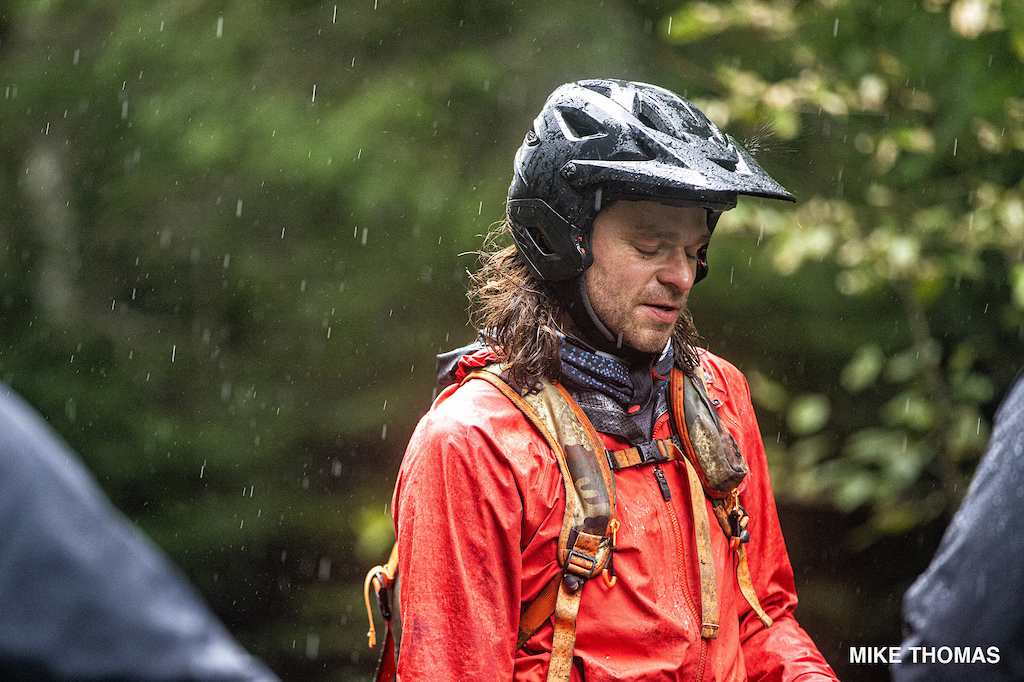 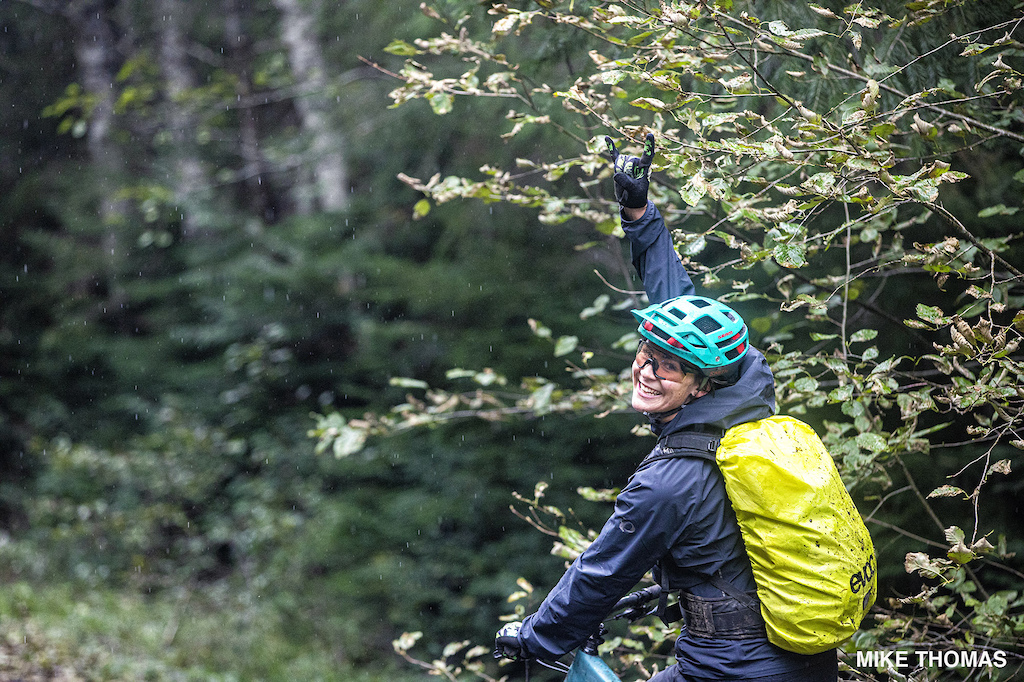 A past winner of Trans-Cascadia and also the first person to ever earn the coveted Go Hard jersey, Aaron Bradford, woke up in the wee hours of the morning in a chair near the fire. “Well the fire was being put out at that point – so I knew it was my time to go to bed.” That didn’t stop him from having an incredible day on course and enjoying Stage 7 in particular. “It was a little cold out there, but we huddle around fires and had a good time. The dirt was incredible. Party trains – it’s just ridiculous how much fun that is – just hooting and hollering with your buddies, just ridiculous! I dropped in with Adam [Craig], Matthew [Slaven], [Matt] Hunter, and [Thomas] Vanderham – we had a good crew and that was a spectacular stage. Even the transfer after that was a highlight. It was nice not racing it, just being seeing the beautiful, awesome, massive trees everywhere. We are out in the thick of it, it’s so good!” 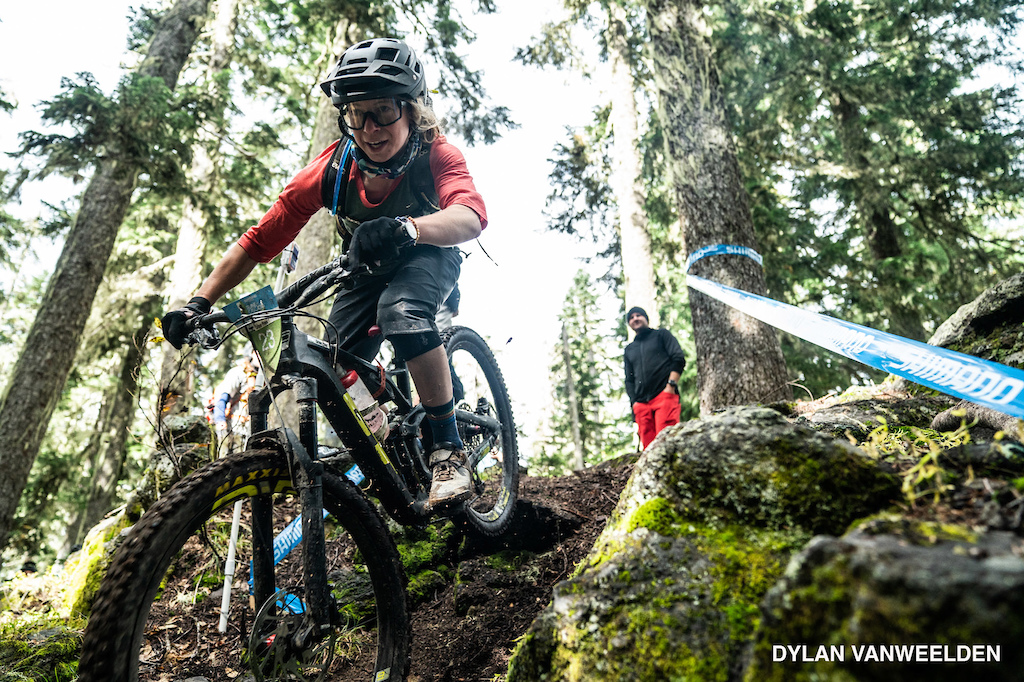 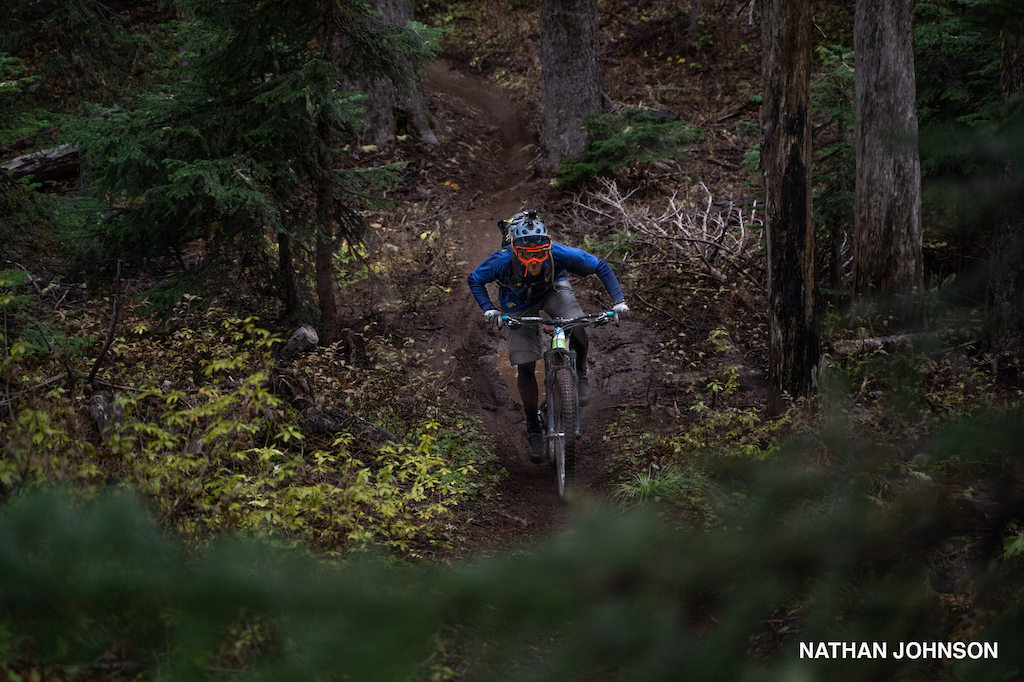 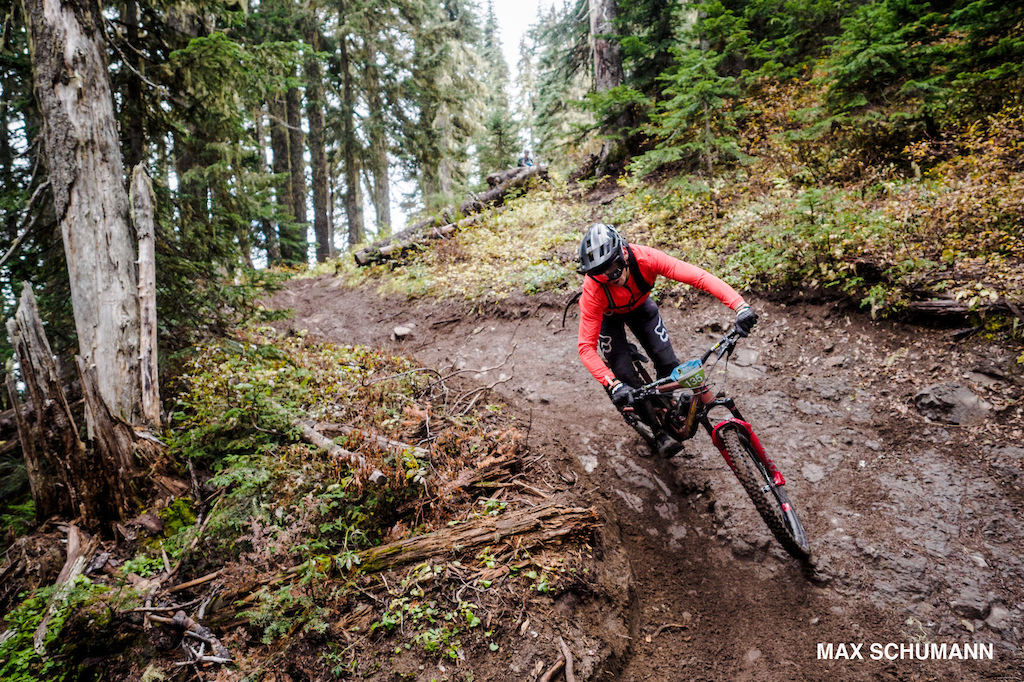 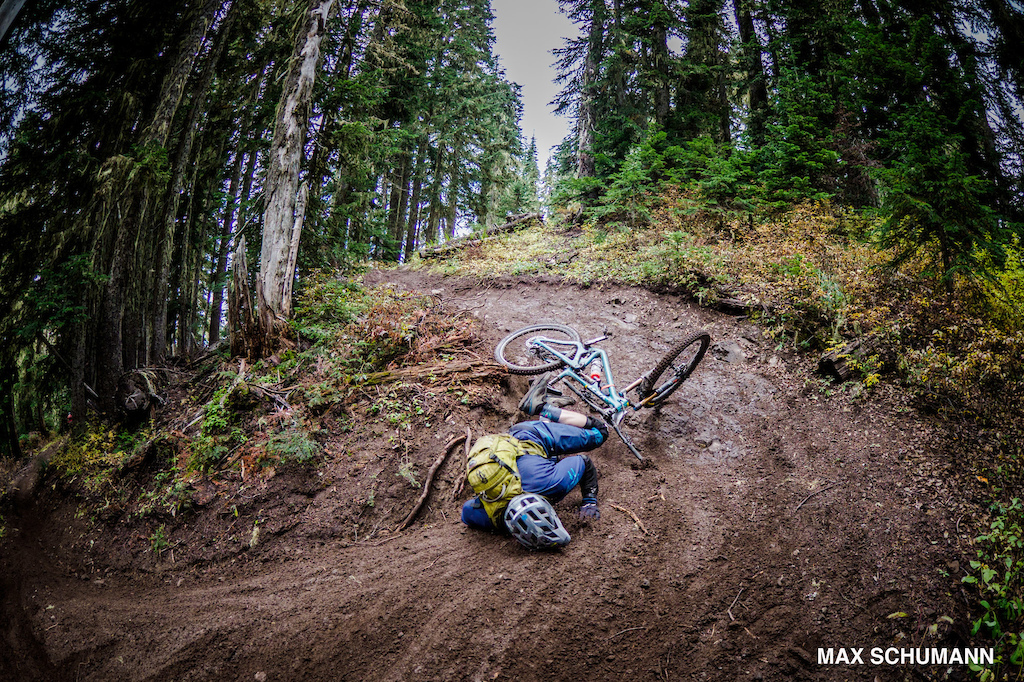 Back at camp the weather cleared long enough for everyone to gather by a big fire and warm up. The music was playing, Hot Toddy’s were being served, and everyone was sharing stories from their day. 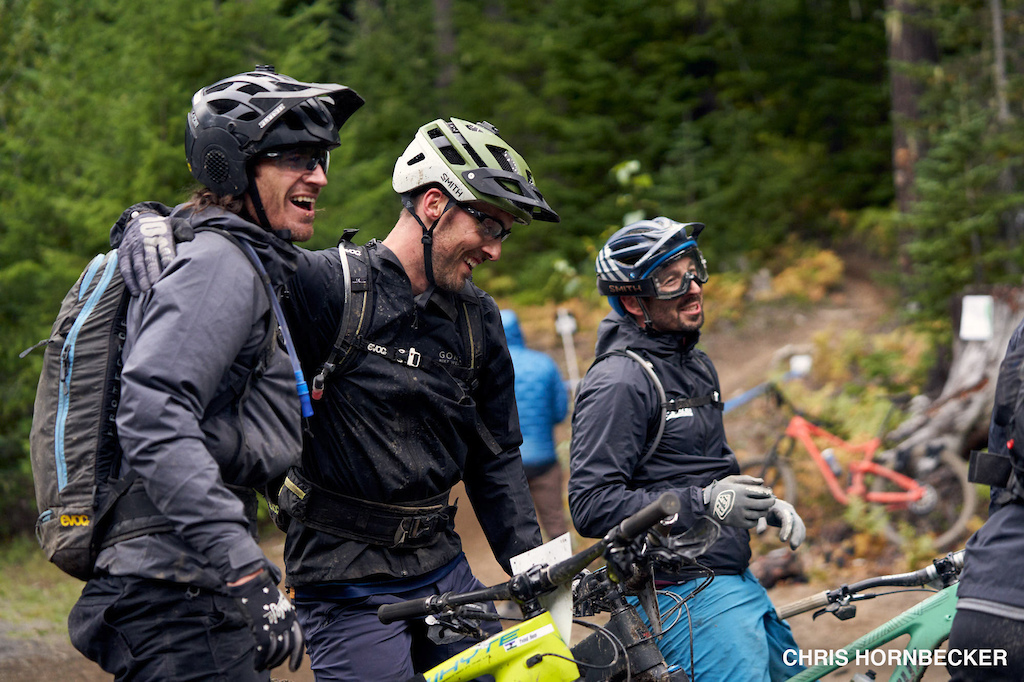 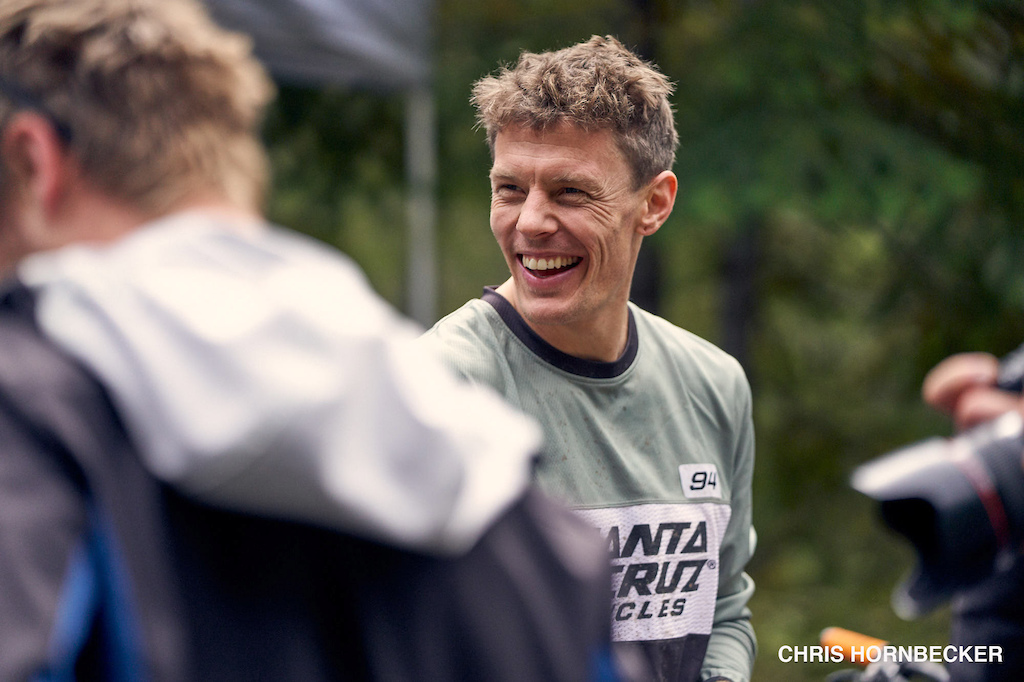 “Today’s stages are definitely the reason why people are coming out here,” says Trans-Cascadia veteran Joe Lawwill. “Yesterday was pretty challenging; it has its own charm and we like it but today was just incredible trails and the transfers were actually so amazing. I had to keep pinching myself. I was distracted by all the fall colours, the dirt, the trees, and the mushrooms. The stages all had awesome flow; they were great to ride with your buddies. You could end the event right now and people would go home happy.”

“We took a super mellow pace and just ripped it,” says Kelend Hawks. “We had a party train every lap and it was great, just having good times out there. The dirt was just unreal, it’s the only way to describe it, it was like riding on a sandy beach all day.” 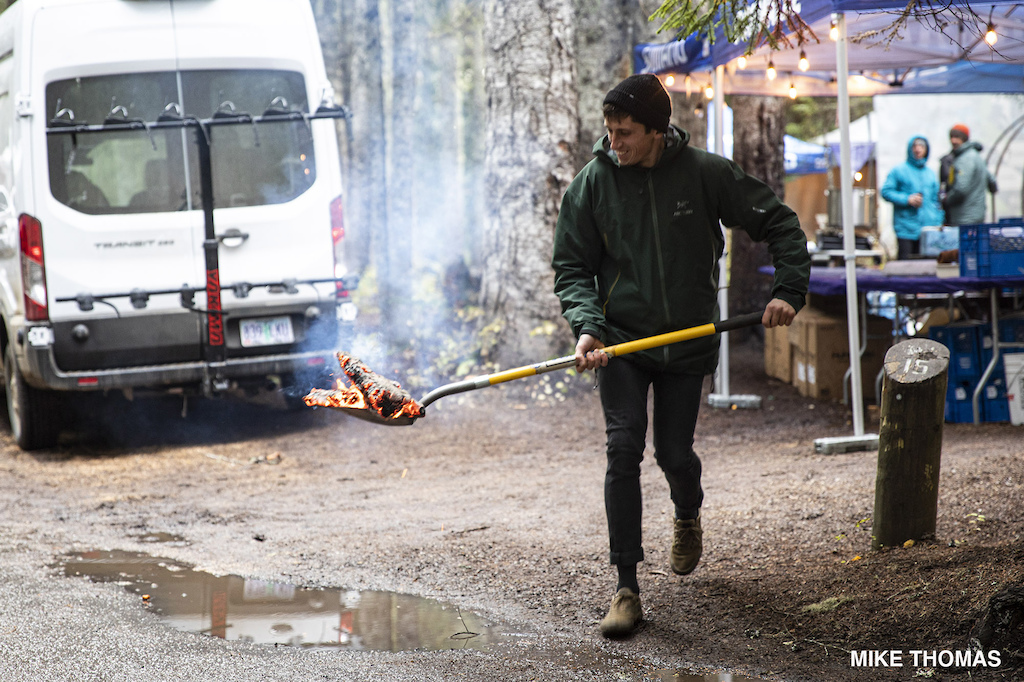 After a gourmet dinner that included Fire Roast Beef Shoulder, Wok Fried Green Beans, Aromatic Jasmine Rice, Herb Salad, and Tomatillo Sambal, racers cheered as the top three were announced in each category. “We got some really fun riding, even between the stages, the liaison after the last stage was probably the most fun section to ride with some friends; fun, fast, flowy sections,” says Geoff Kabush who is currently in third place. “I had a good day out there! I think I was a half second ahead of Romain today, so 90 more days and I’ll catch up. Funny to see that me, Chris, and Romain were within seconds on each stage, I’m sure we are definitely interpreting the trails very differently, but the end result is some close racing, which is fun!” 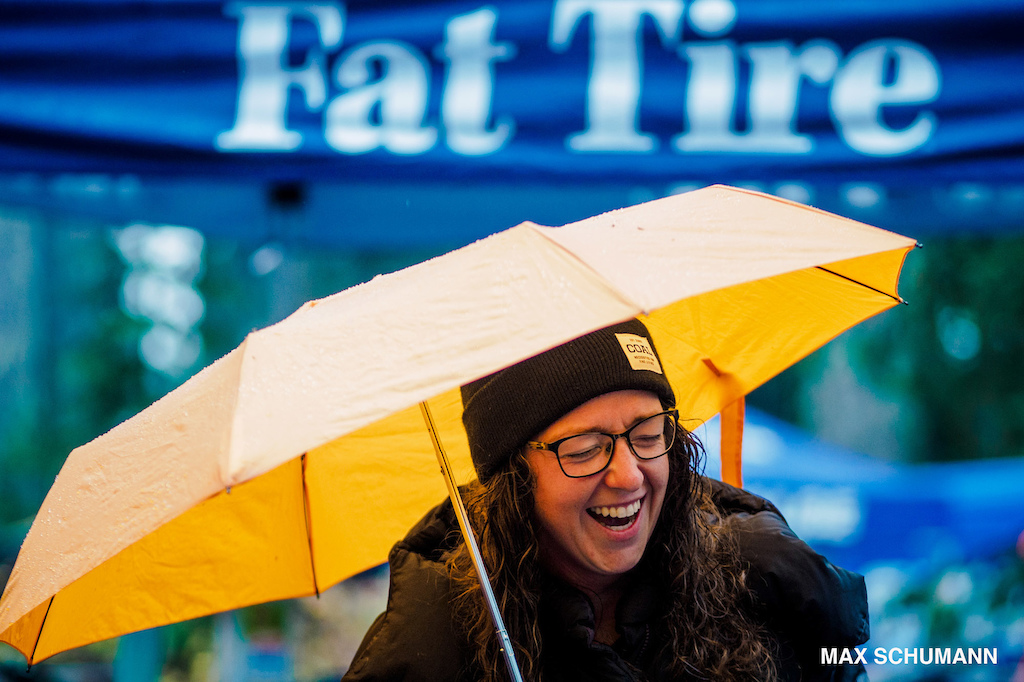 Just as the Day 3 maps were handed out and details of the course shared it began to snow. . .


This event is under special use permit of the Gifford Pinchot National Forest.

Tweet
Must Read This Week
18 Bikes That Could Be Updated in 2022
51234 views
Mechanics Petition for Durability Standards & Repairable Budget Bikes
50020 views
Why Your Bike Might Have Less Travel Than Claimed
42678 views
Cam Zink Signs with Devinci
35878 views
Pinkbike Poll: Has Your Shock Ever Failed?
33490 views
Video: $1100 vs. $6500 In Upgrades On A Used Mountain Bike - Budget vs. Baller Episode 5
33192 views
Details Revealed for Hope's New Tech 4 Levers
32954 views
Luca Shaw Joins the Canyon Cllctv
32865 views

chileconqueso (Sep 29, 2019 at 10:24)
Hopefully the ride is mapped someplace. I’m only a few hours drive away. It’s quite a destination if you no cell service and carncamping!