"Because Day 1 was such a hard day of climbing, today is payback," welcome news from Nick Gibson, Race Director. "We've got three big shuttles and your stats are 8,000 feet of descending with 2,000 feet of climbing." What was best described as an active recovery day saw racers shuttled to the top of the ridgeline east of camp three times to enjoy a wide variety of terrain - including what became known the 'spiritual experience' of Stage 6. 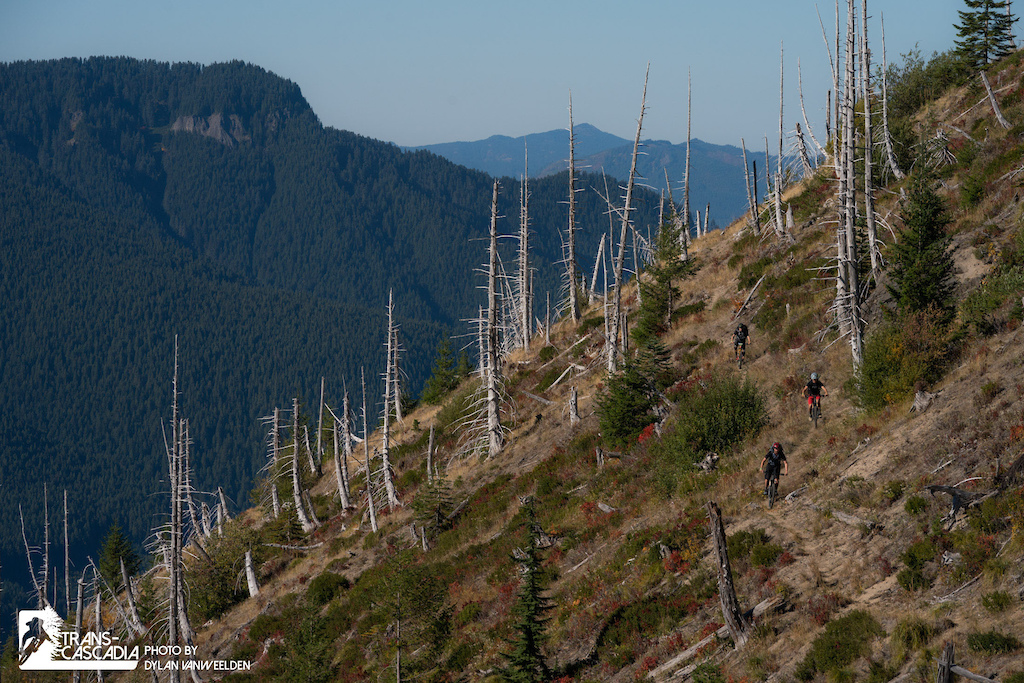 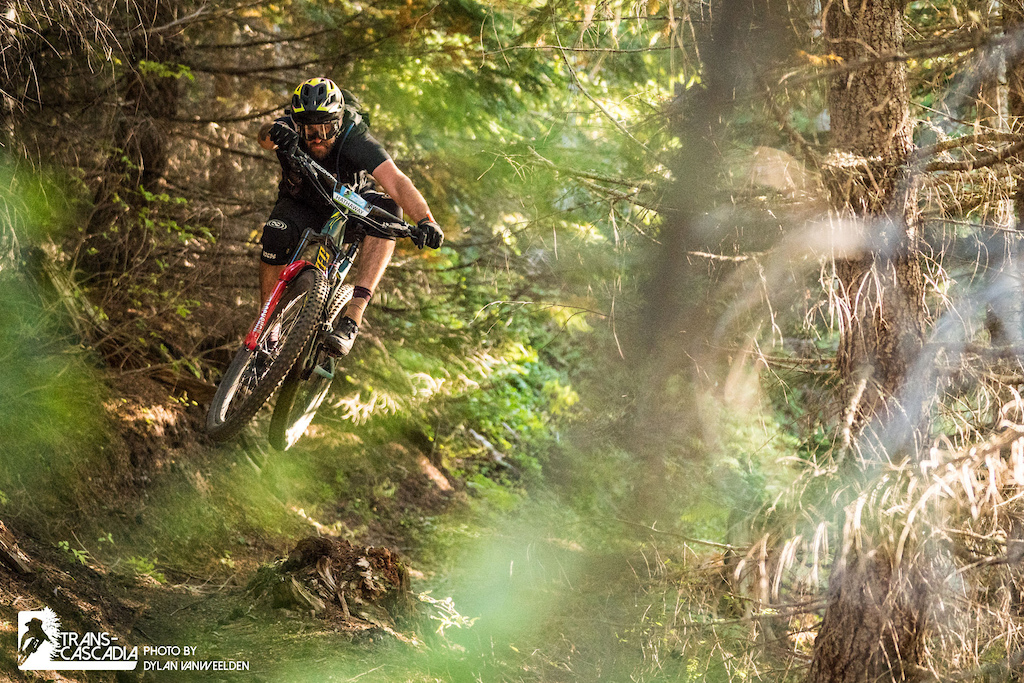 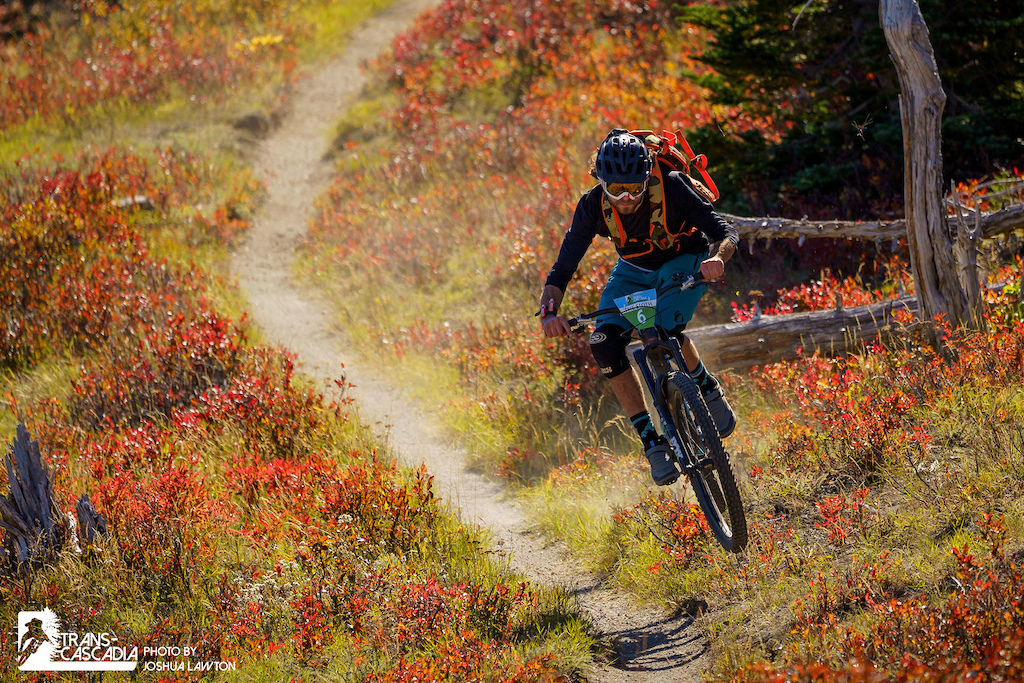 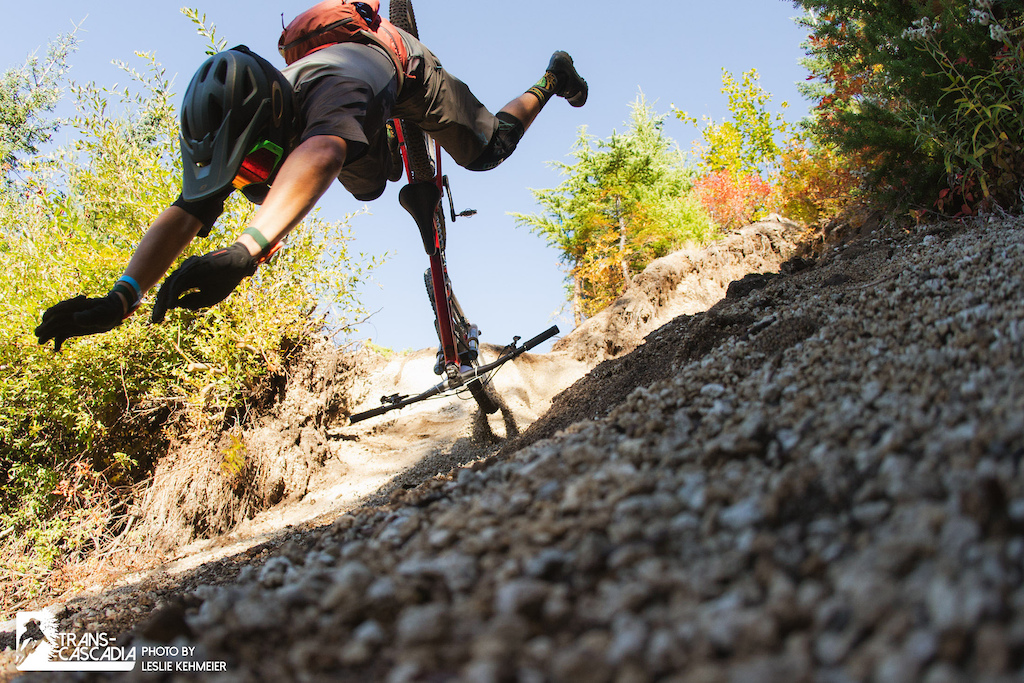 "Today had three totally different stages and different aspects," Adam Craig tells us. Adam has been heavily involved in the trail work and scouting for Trans-Cascadia. Stage 5 had racers heading south from their drop point with a neutral section in the first third of the trail. "It is a classic northwest bench cut trail with kind of cool pumice tread. It's had a lot of recent moisture and these guys did a great job of clearing off sight lines."

The second stage included the most pedaling for the day. The liaison from the drop point took racers along a ridgeline north to the start of stage 6. "We traversed north across it for 45 minutes. This area is bare alpine as it's on the outer edge of the Mount St. Helens blast zone and is a big broad north-south ridge. The trail follows the perfect gradient carving back and forth across it and it's perfect for going a million on your mountain bike," continues Adam. 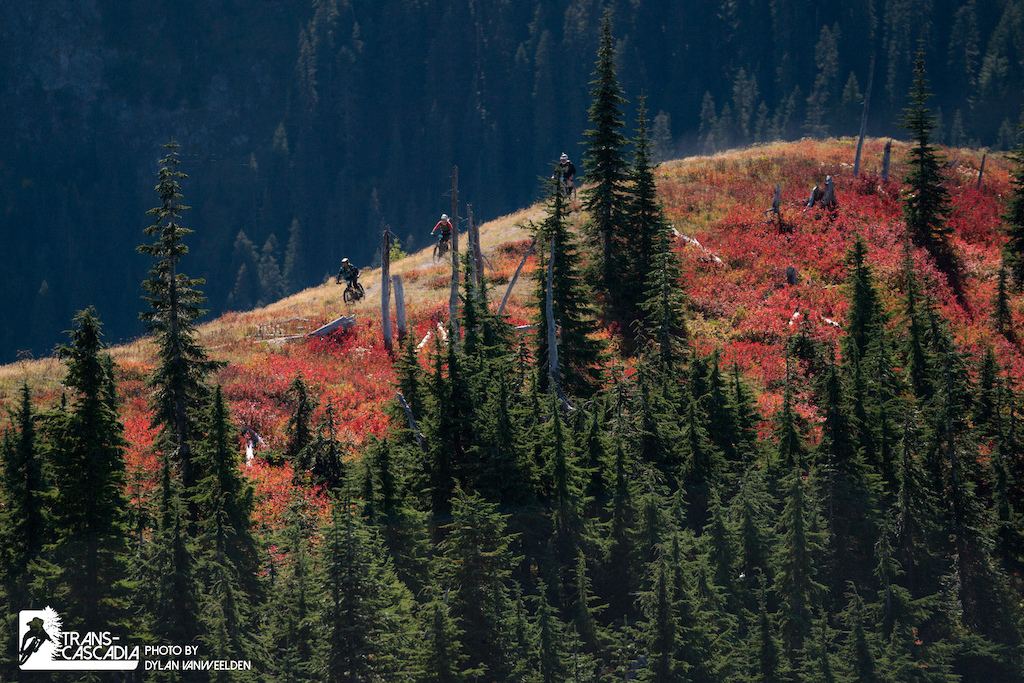 Dropping into Stage 6 became the high point of everyone's day and both brought everyone together with the shared experience and stoked the competitive fires for a few of the racers. "Stage 6 was a spiritual experience," says Spencer Paxson. "It was f*cking awesome. It's like one of the best ski runs of your life, like one that sticks with you and that sensation - it's more the sensation of it that made it. That's what it was. I think that's a fairly unanimous feeling. We got to the bottom and there was a little intermingling with the Syndicate crew, all these experienced and professional level riders, and a few amateur level riders and we were all on the same level. There was no distinction, everyone was talking and all giddy about what we had just ridden. It was so good that it normalized the full spectrum of riders who are here and that's a pretty rare thing."

Adam and Elliot Jackson were on Stage 6 to witness some of the action and recapped it back at basecamp after dinner:

"I definitely had front row seats for that whole 'Loris' getting involved thing. He's in it now, we've got him," Adam tells us.

"I swear, Josh [Bryceland] beat Loris on Stage 2 by 8 seconds and we were going a million. That is literally one of the more impressive things I have ever seen. I don't understand," says Elliot.

"I dropped in behind Elliot who was following Loris and we just did that until Elliot blew off the trail which gave us a chance to slow the f*ck down. Loris was going to kill us."

"I didn't crash, I just blew off. I was trying really hard to keep up with Loris -"

"Who was winning! While getting beat by Bryceland!" Adam interrupts, laughing.

"You were doing a good job Elliot, you were riding your ass off, I'm proud of you" ~ Adam

"I was trying hard," says Elliot proudly. "Okay, I'm going to get a bottle of wine."

"Hurry!" Greg Minnaar hollers at him from somewhere in the dark behind us.

"Stage three was our lovely afternoon jaunt back to camp," Adam continues his description of the day's stages. "We rode the same ridgeline and then took a left and descended right back into camp. It's really deep pumice and it's a really sunny windward side of everything. Drier but really fun drifting pumice - there are these natural pumice ruts here that ride pretty darn well." 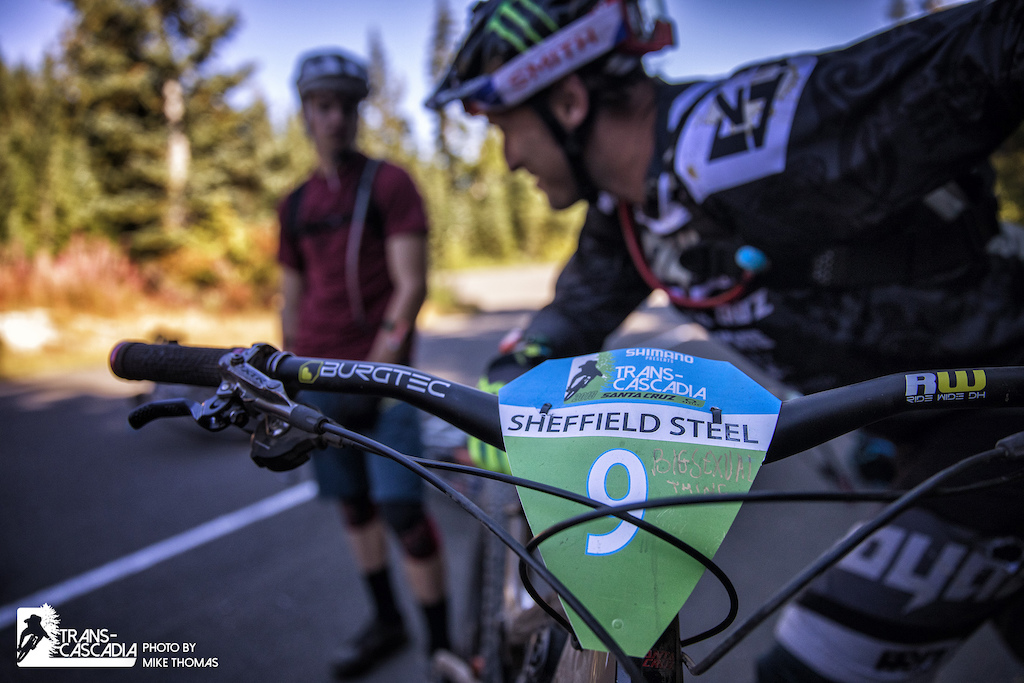 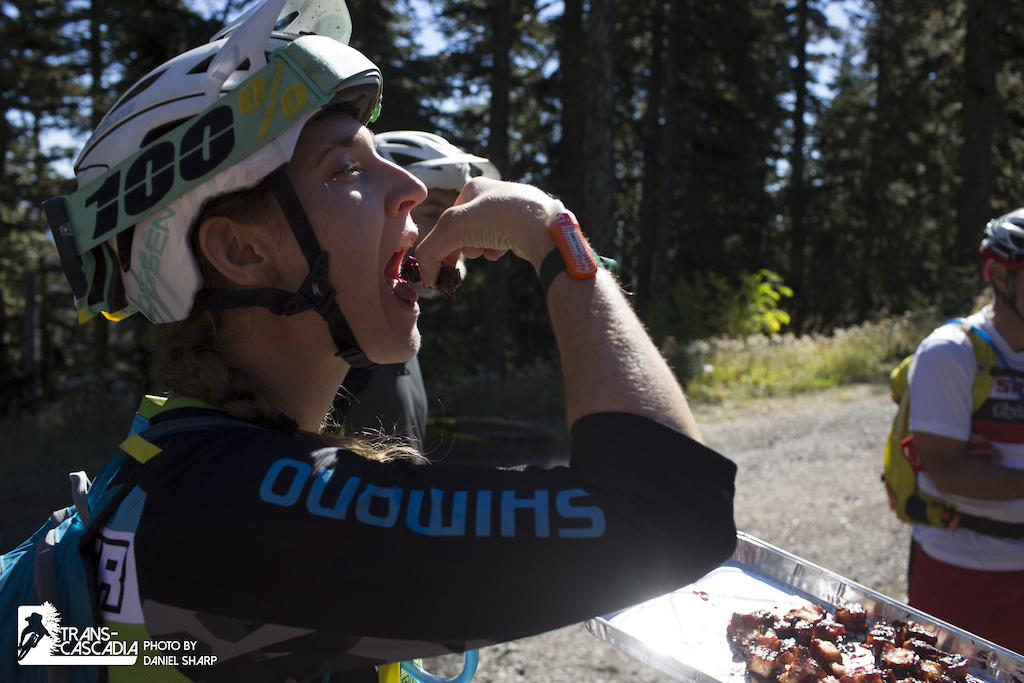 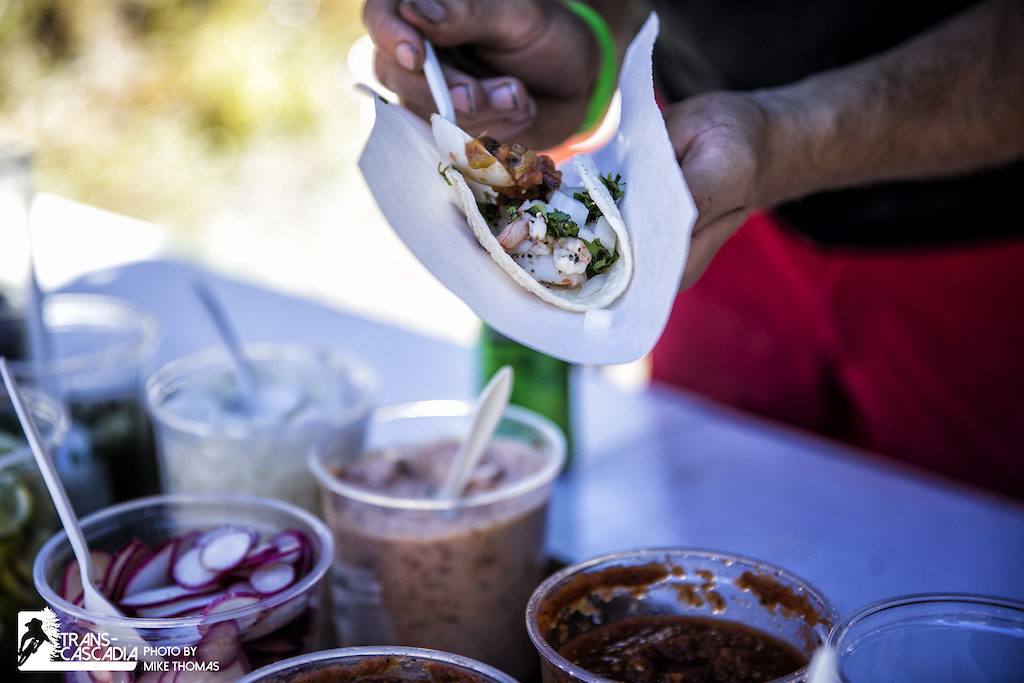 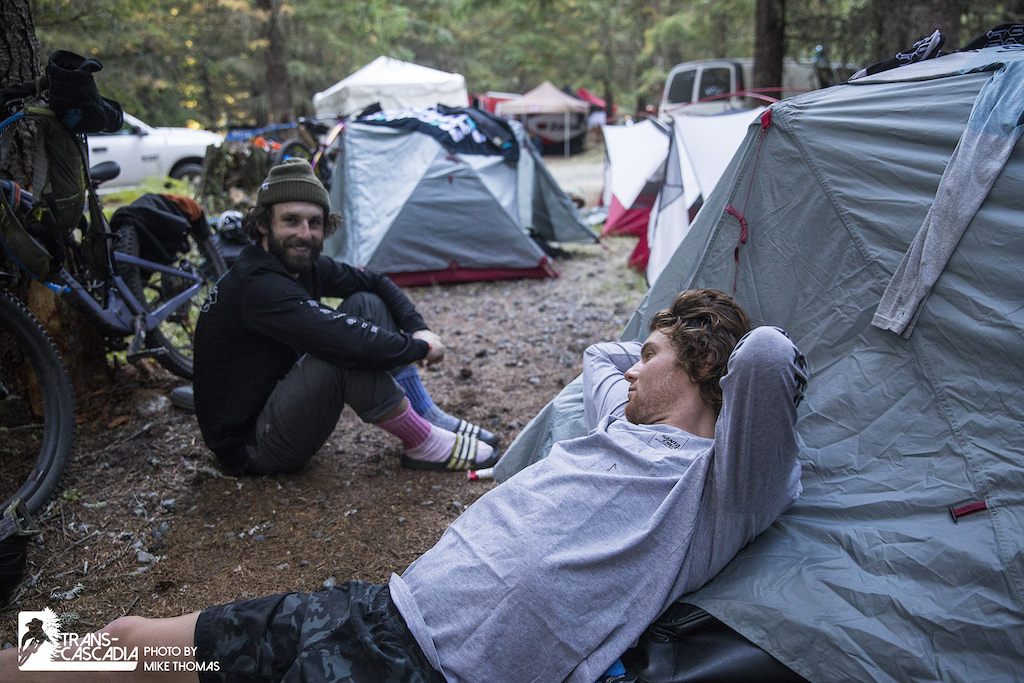 At the end of the day, Loris Vergier was in the lead by 2 seconds. "On the last stage yesterday I felt really good and I pushed, and I saw I was pretty good. So, today was about fun and trying to pedal a little bit harder than yesterday. Having fun and going fast is a good thing and the second stage of today was insane, the best trail of my life. It was good dirt, everything was predictable and fast and the best dirt."

The Pro Men's category is tight with four racers within 14 seconds of each other. Francois Bailly-Maitre and Peter Ostroski took second and third place after Day 2 and the returning champion, Geoff Kabush, is in fourth. "I'm still in the mix, there's just been a lot of fast stages so there's not much time in it still. There was some nervous high-speed stuff out there today. Stage 6, and parts of Stage 7, were actually so high speed it was fun to have some corners to really rip. They had lots of open - you could see and read the trail, and it was just about how fast you wanted to go." 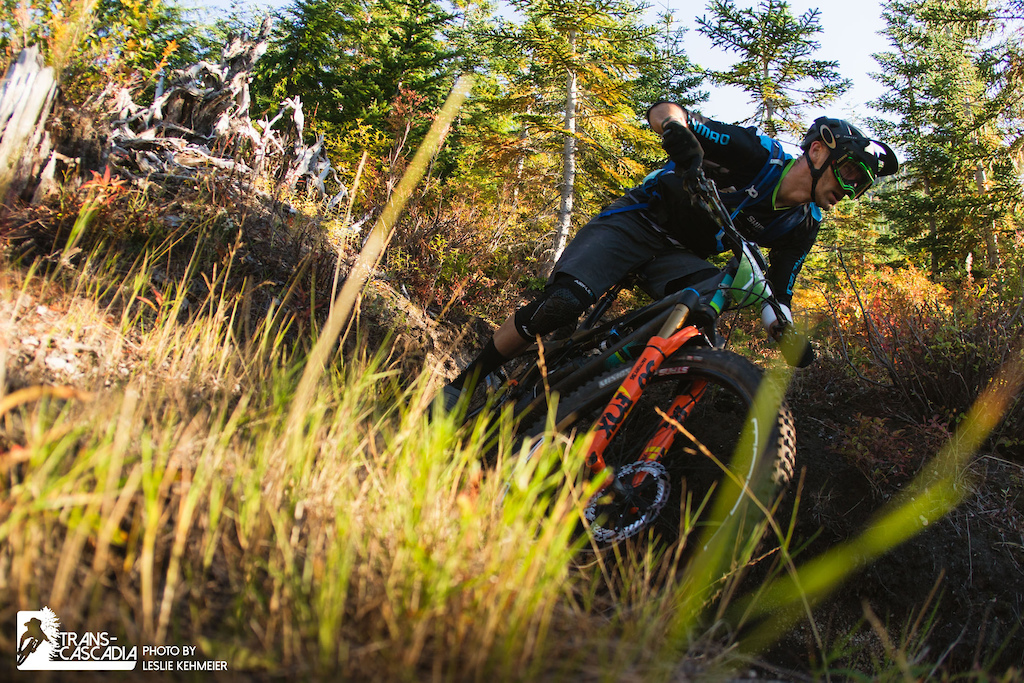 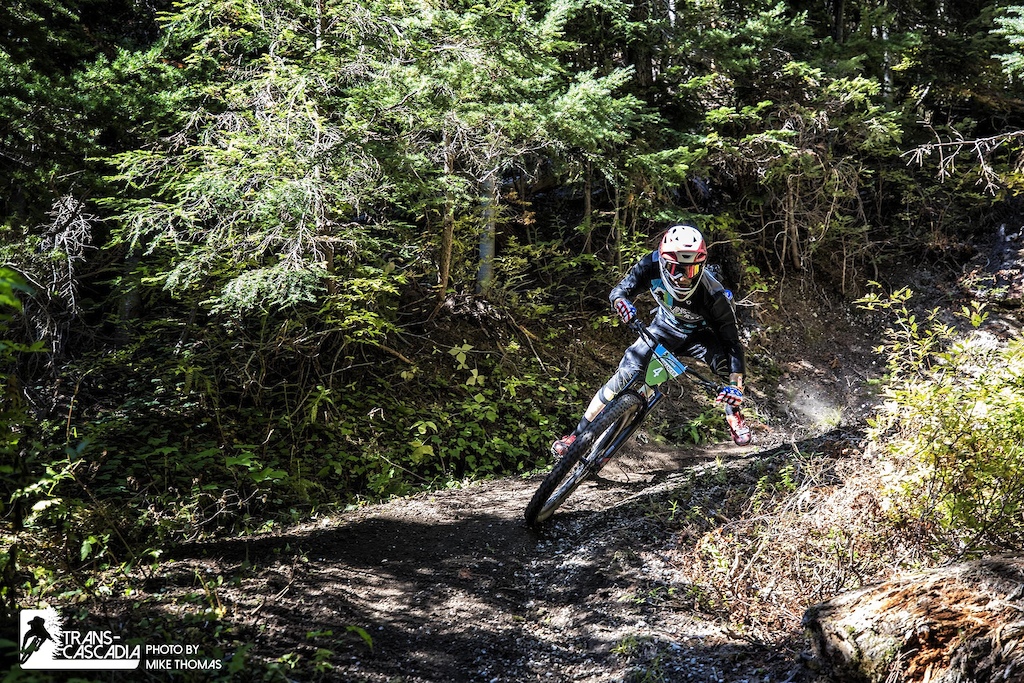 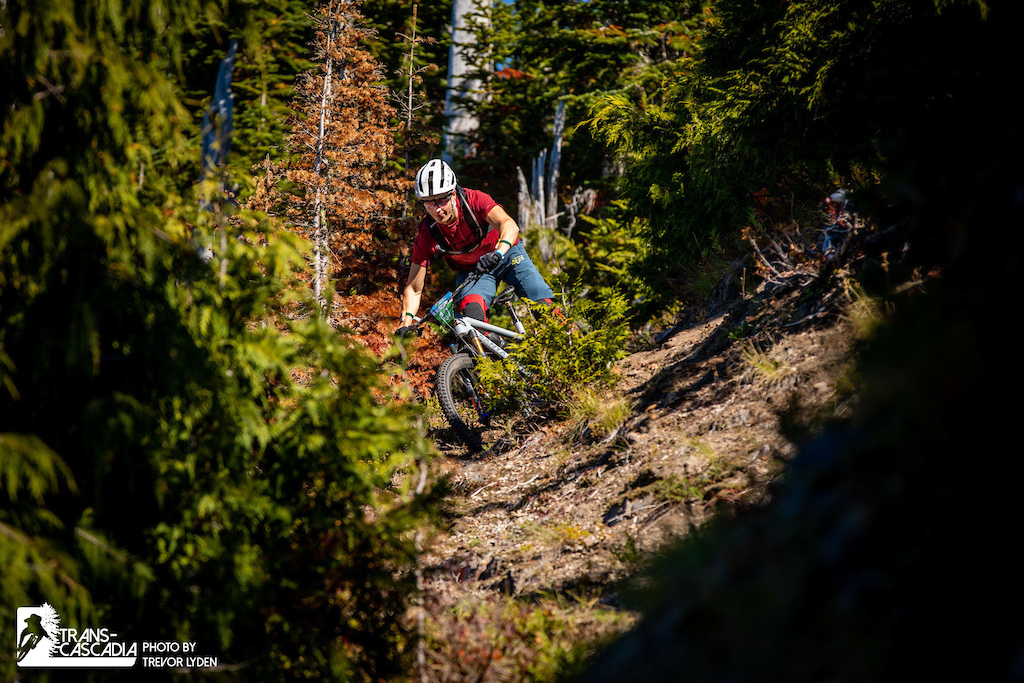 "The trails are world class, mind-numbing," says Garett Heitman who is currently leading the Amateur Men's category. "Not just the stages - I would pay to ride the transfers, seriously! This event, the production value is high but it's relaxed - so core, simple, not over the top, but anything anybody would ever want as a mountain biker. And obviously, this weather doesn't hurt. Today was fun. Truthfully, I'm just trying to ride fun fast. If I see it I trust it, if I don't, I slow down because I want to go home in one piece. I was smiling the whole time. The second stage today - everybody is talking about it - I've never ridden anything so fun, so fast, so cool, in my whole life." 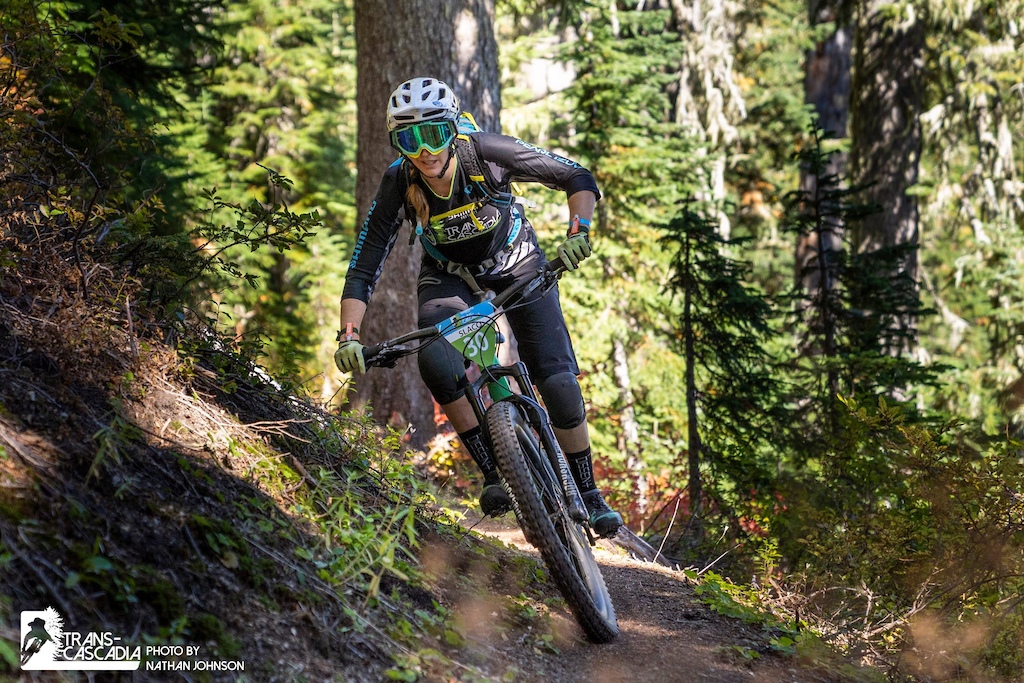 Emily Slaco is still in the lead for the Pro Women with Kim Hardin in second place and Bekah Rottenberg in third. Kim raced at Trans-Cascadia in 2016, "the new location is a little rawer and I don't think anyone has been out here, so I think it's way more of a level playing field and it's rad. Stage 6 today was amazing, good dirt the whole the way down really good sight lines with open fast sections and twisty turns in the middle and sandy, loamy, stuff at the bottom. It was one of the best trails I've ever ridden, it just kept going. The grade was perfect, it was awesome!" 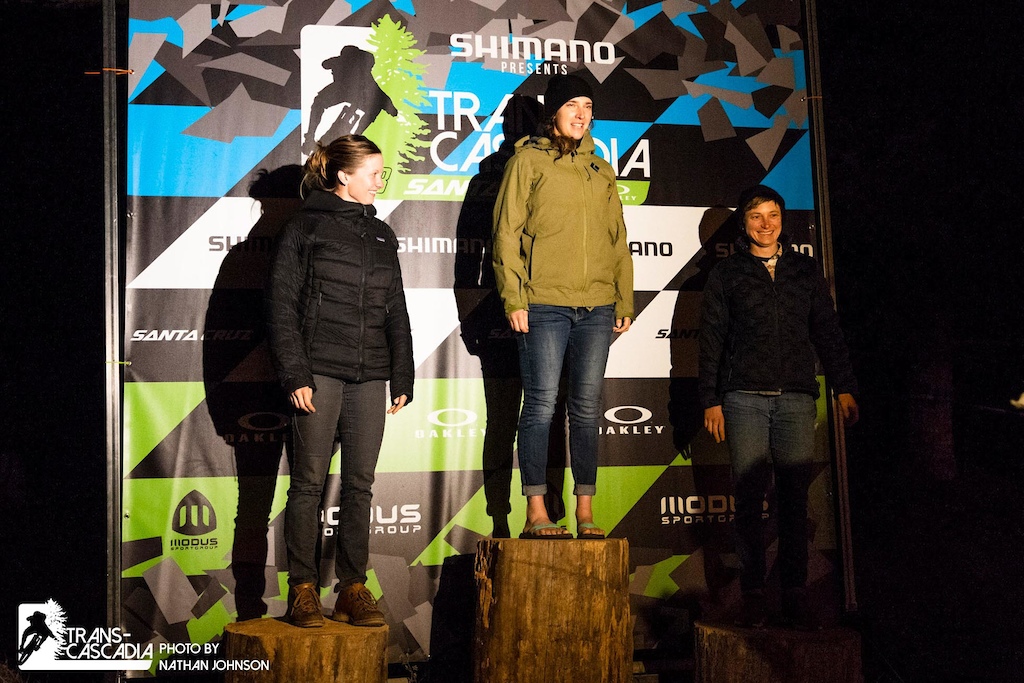 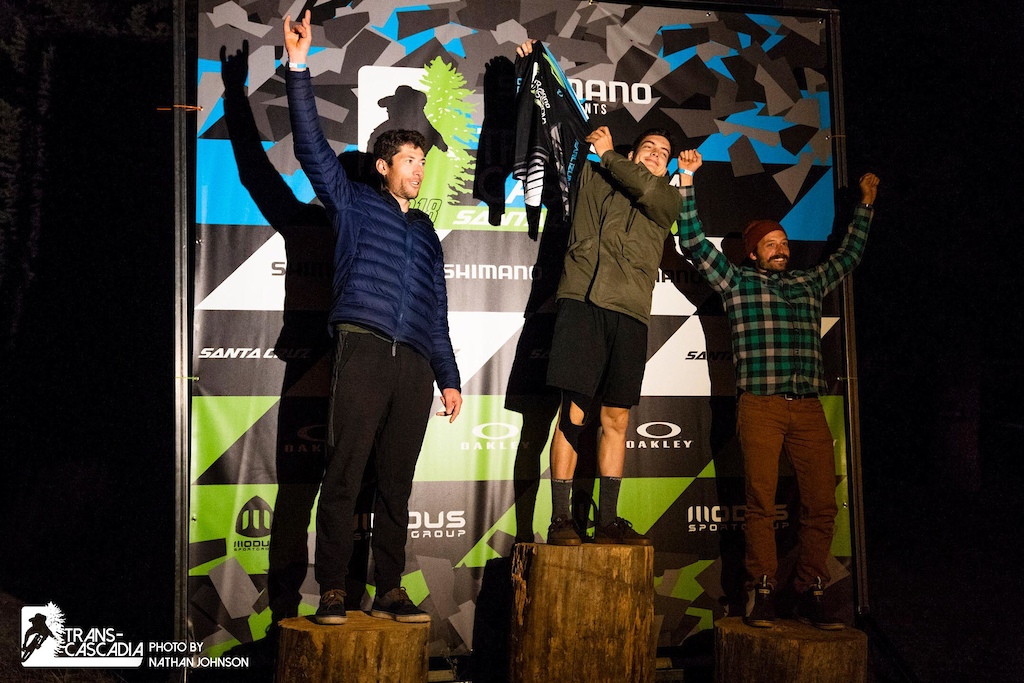 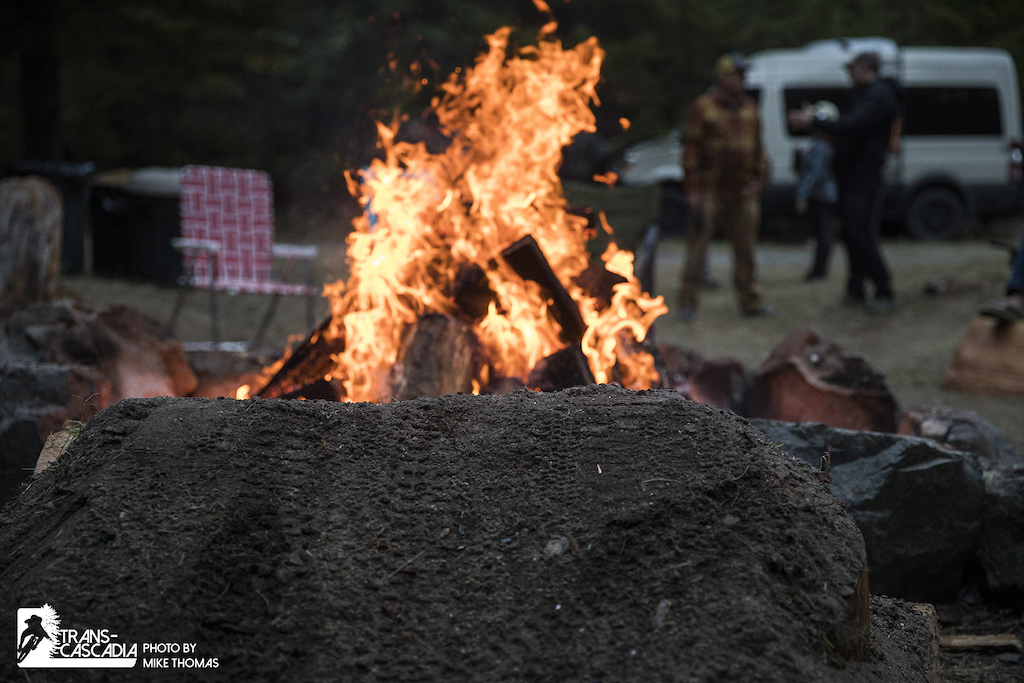 Day 3 will have racers traversing to our next basecamp. Stay tuned for what is sure to continue to be a tight race between our top for pro men.

phile99 (Sep 29, 2018 at 22:18)
I freaking KNEW that's how it worked. Look at the OTB pic--you can clearly see that the trail has formed a tentacle and grabbed on to the front tire. I've had so many OTBs where that was the ONLY possible explanation--finally, there's proof! Game changer.

trimakas (Sep 30, 2018 at 10:16)
The whole Trans Cascadia Crew does such a good job on this event. If you ever want to spoil yourself with a rad event from start to finish, then do this race. They do it right!

NotAnotherClimb (Sep 29, 2018 at 20:58)
I can attest that it really feels like riding in the wilderness in the Gifford Pinchot National Forest. Definitely a different experience. Makes you feel truly alive.

jgusta (Sep 30, 2018 at 12:37)
Great media coverage TC, killing it with the highlight clips Tom Teller! Looks like you guys nailed it with organization, coverage and optimal weather amd conditions to chill in the woods.

railin (Sep 30, 2018 at 21:11)
They really need to release these trail locations to the public. Who else is going to keep them from going to the weeds!

getsomesy (Oct 1, 2018 at 23:27)
the moto's and (surprise) forest service that take care of it regularly. dont even think about getting mtb possessive, so sick of any user who starts acting like they have somewhat exclusive use of public places