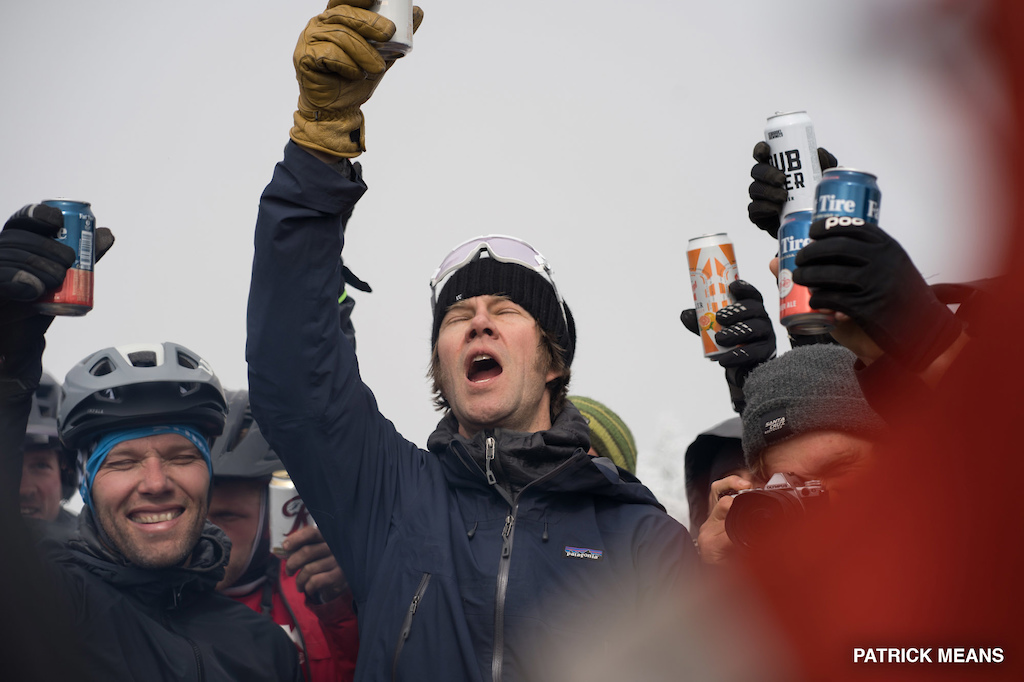 When racers woke up on the morning of Day 4, snow could be seen on the ridgelines just barely above camp. Racer Director, Nick Gibson, and Lead Medic, Nick Hall, headed up the hill and quickly realized that there would be no racing. It was a beautiful snowy landscape, but they weren’t the conditions that would allow the organizers to send timers, start gates, and volunteers out on course all day long. And the overcast skies would prevent a helicopter from aiding with any emergency medical extractions. 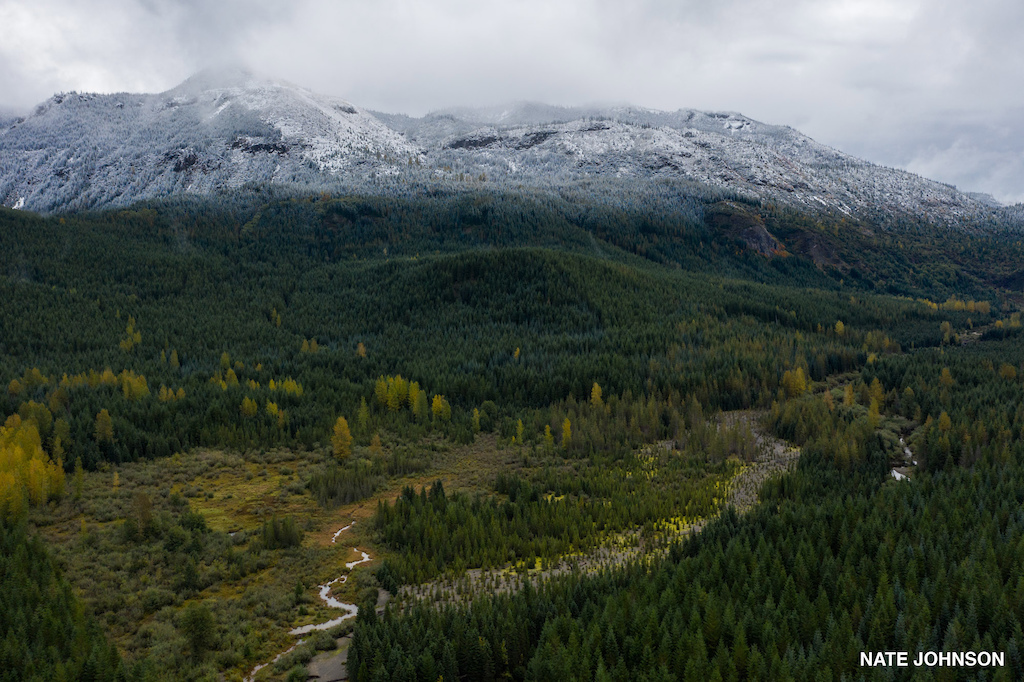 “We’ve hired the best medical field we can find,” says Director of Logistic, Tommy Magrath. “We’ve got a diverse experienced crew of mountain rescue, flight nurses, docs, surgeons, everything and we lean to them – that’s why we hired them. So, when we’ve got a consensus that they don’t feel like it’s safe to race but they are comfortable with a casual group ride and taking the racing element out of it, then it’s a no brainer for us.” 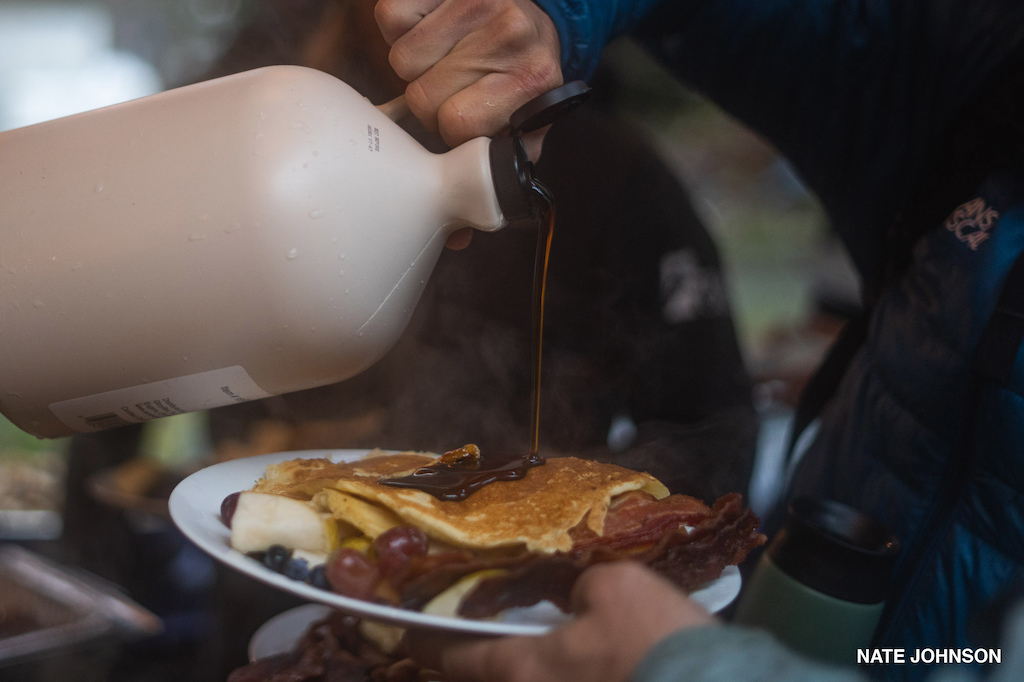 After another amazing breakfast at basecamp the organizers rallied the troops and provided shuttles for anyone who wanted to go home. To their surprise, nearly 90% of the racers chose to stay.

“We took off for the ride as a group and everyone was asked to bring a piece of wood,” says Racer Director, Nick Gibson, “and when we got to the top there were over 100 pieces of wood for a bonfire. I think that was a pretty good example of the community. It was a good bonding moment.” 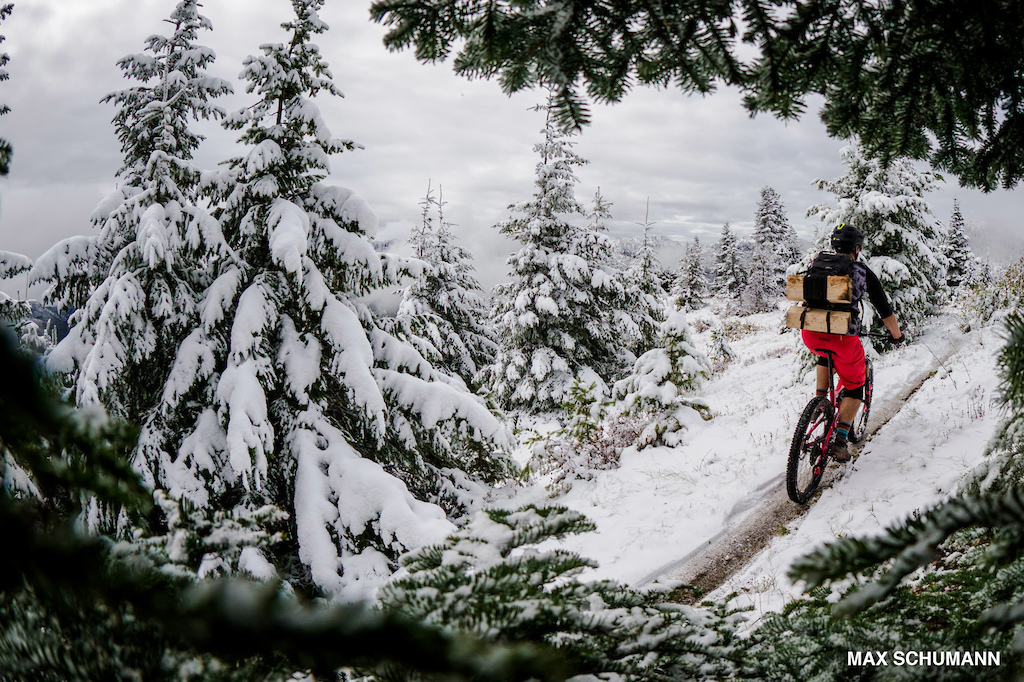 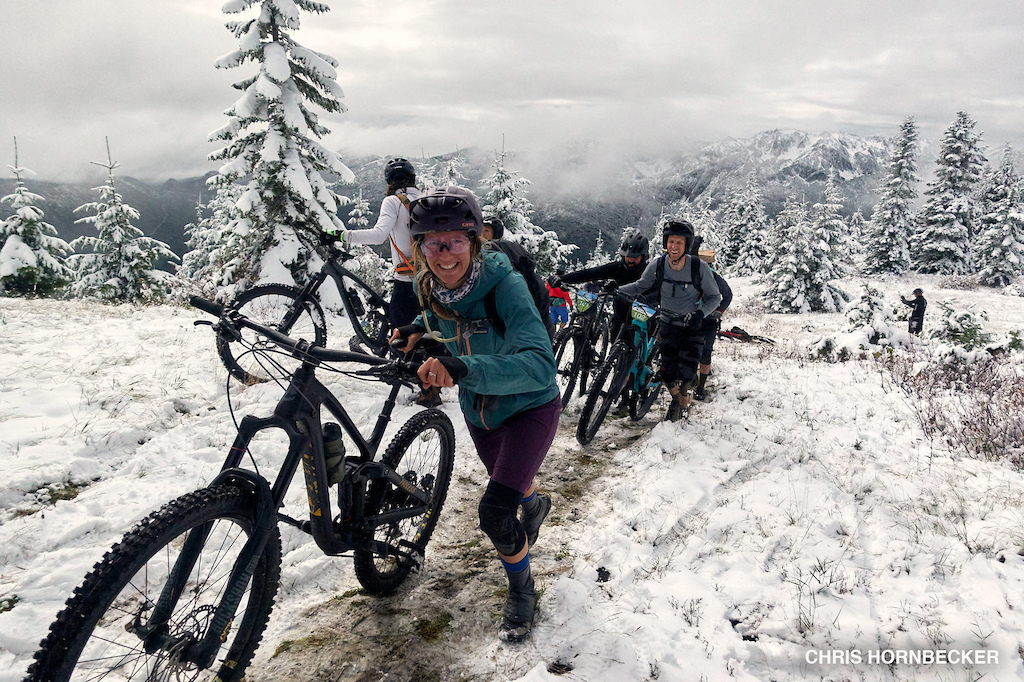 One hundred and four racers carried wood for the fire and beverages to the top of the snow-covered ridgeline to celebrate their new Trans-Cascadia community before dropping in to ride some sweet trail back to camp. 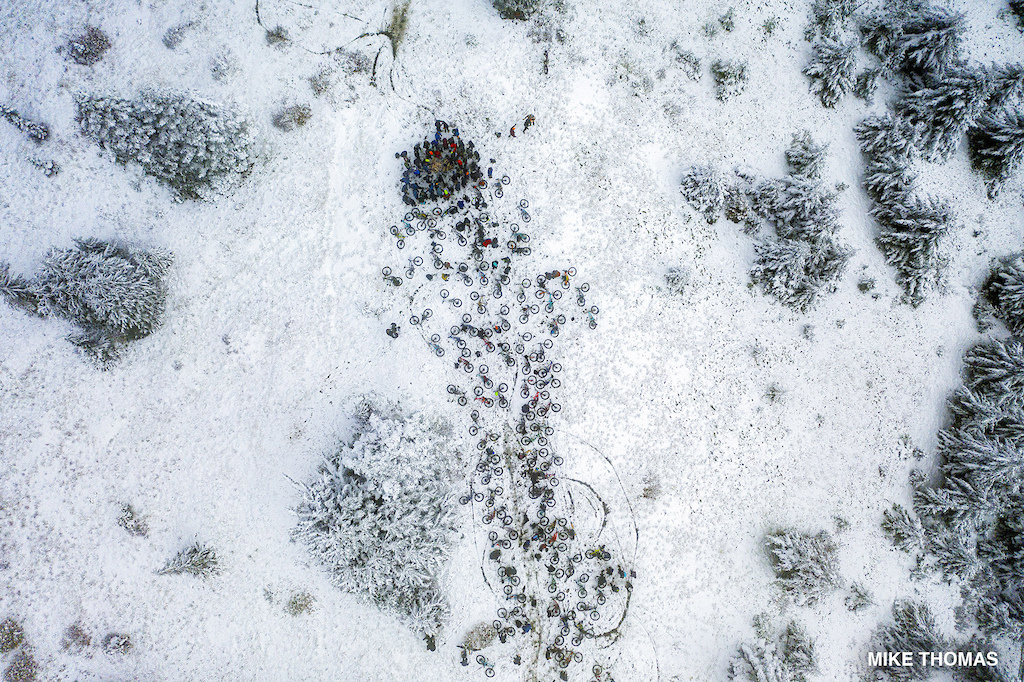 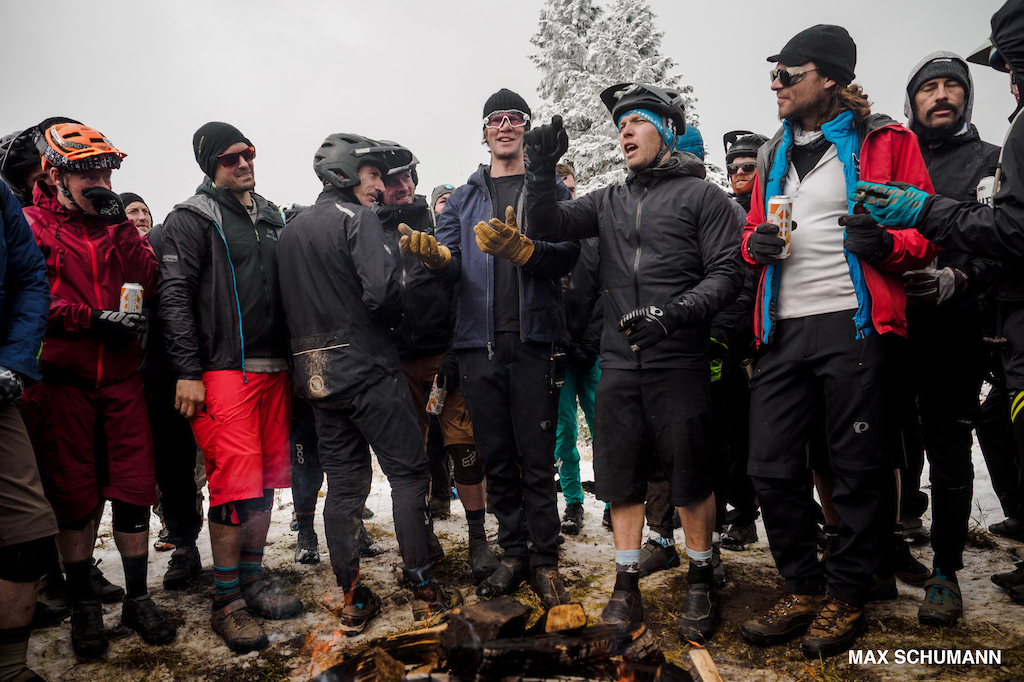 “I actually was not upset [about not racing today] at all,” says John Ramsden. “It was obviously going to be a pretty difficult day for everybody involved whether you were racing or trying to organize the race, but the fact that they then came together and said let’s go for this group ride – I thought it was an outstanding idea. It was very, very difficult getting up to the top of that mountain but when we finally got up there it was absolutely cool to be on the top of a ridgeline in a completely covered snowfield with a fire going and everyone carrying up two or three pieces of wood and we had an absolutely wicked party up there.” 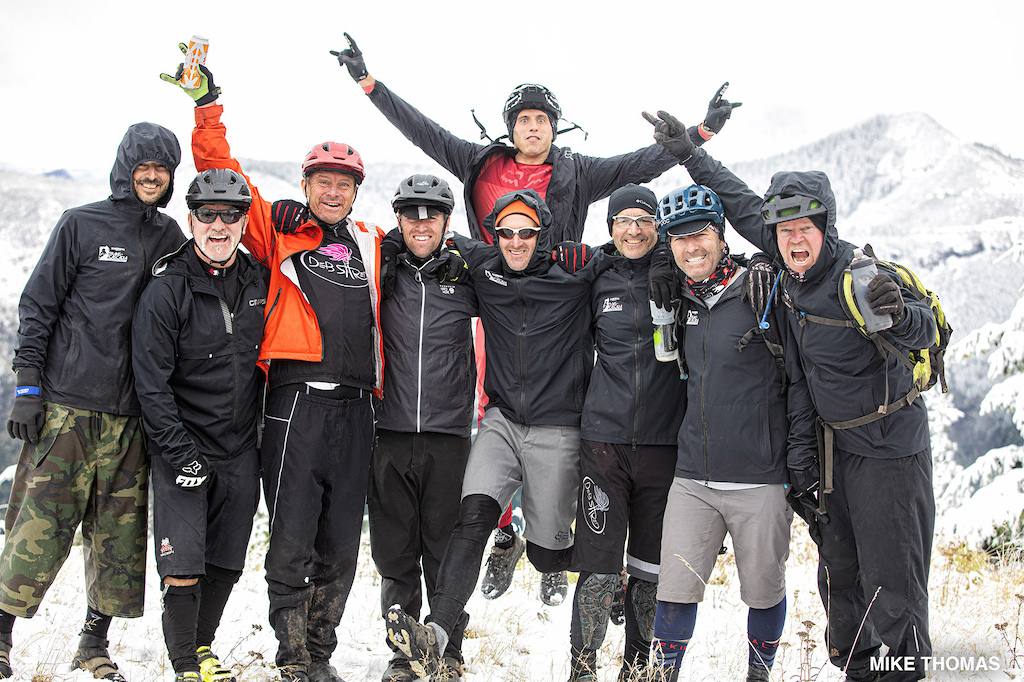 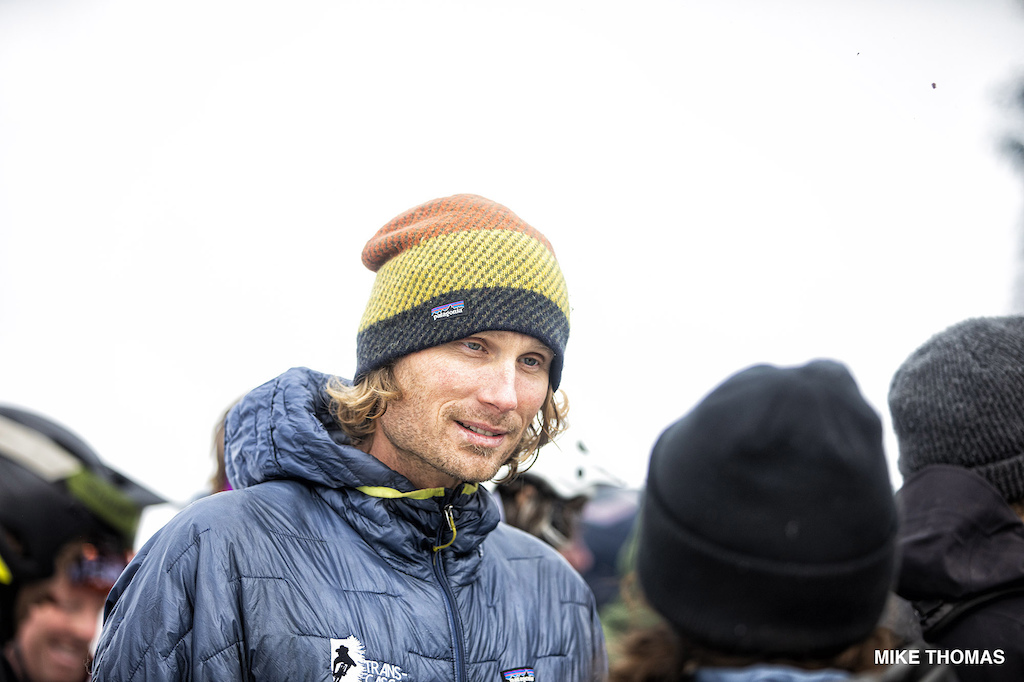 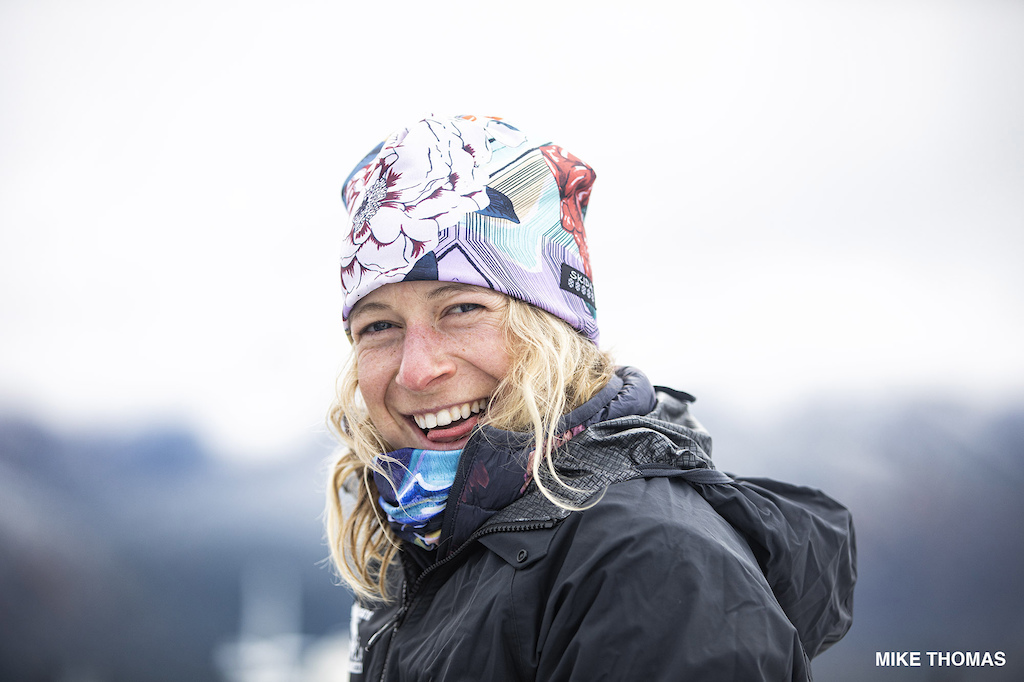 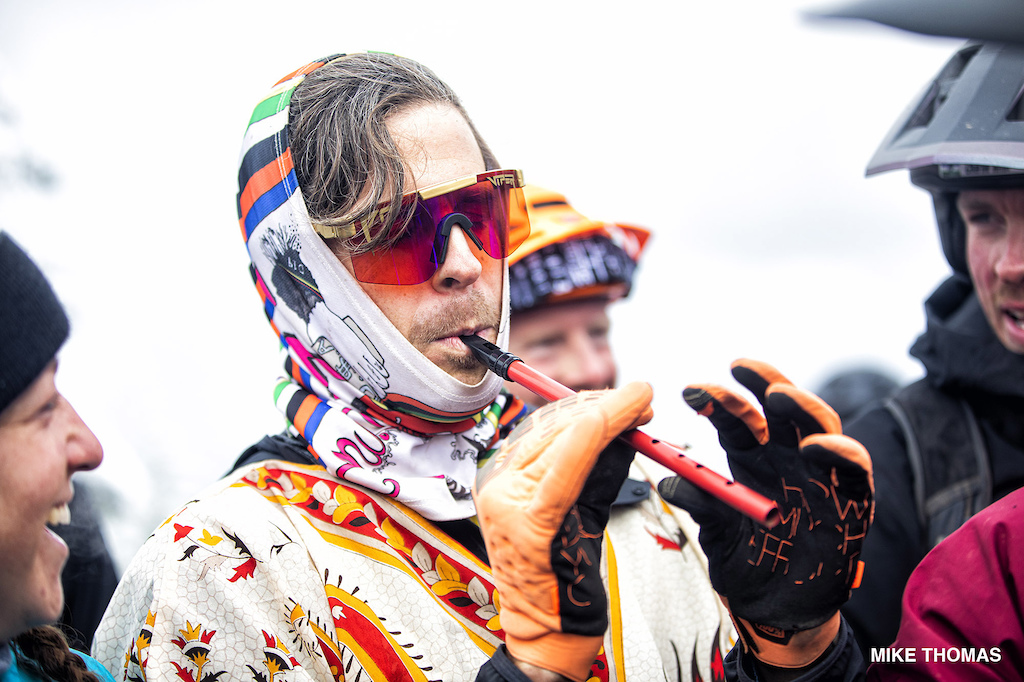 While not racing felt bittersweet for Christina Chappetta, it didn’t stop her from embracing the adventure. “The fire was really awesome, it was crucial; it was really cold up there. You didn’t realize how cold it was until you stepped away from the fire and you were just checking out the area and then you were like ‘oh dang, it’s below freezing, better get back to that fire.’ But it was impressive having the fire and beverages at the top and then watching everyone drop in. It was a pretty special moment.” 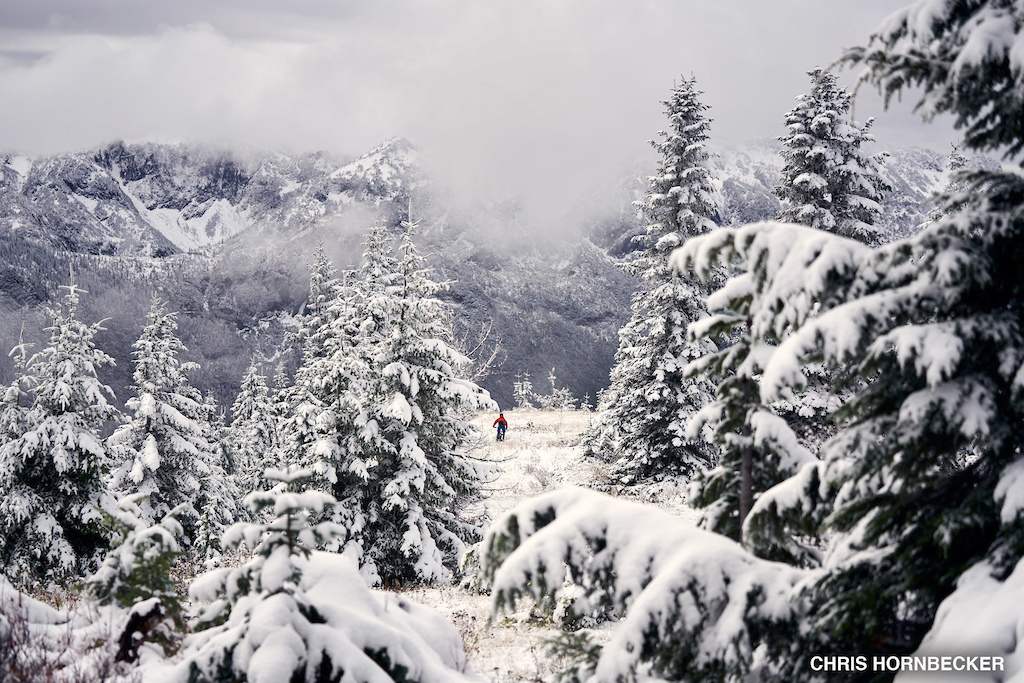 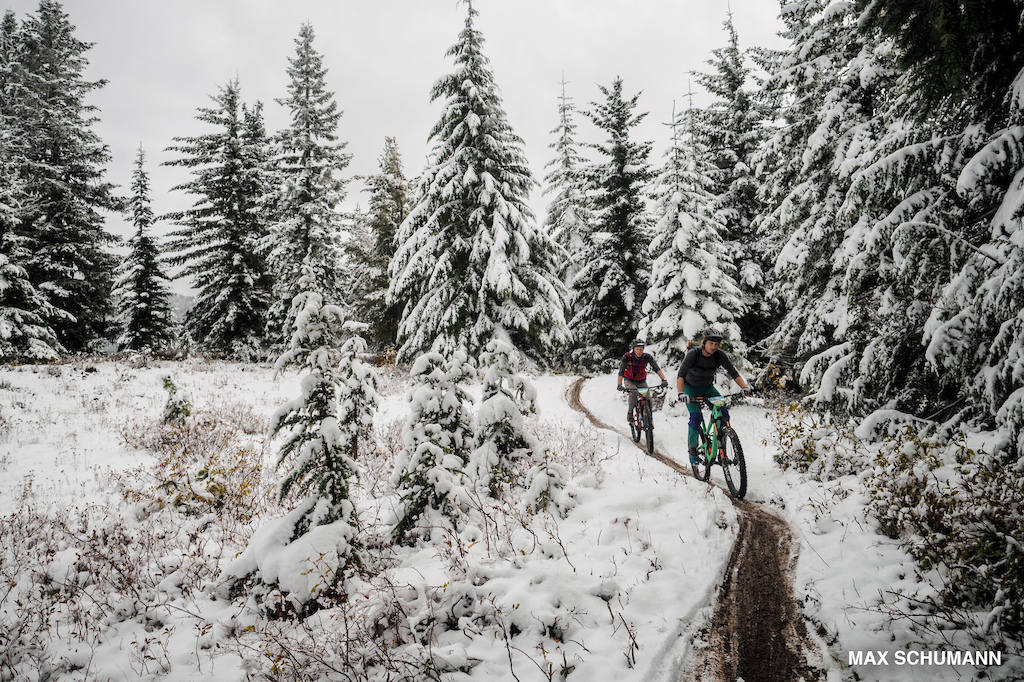 If anyone was going to be upset about the lack of racing, it should have been Chris Johnston who ended Day 3 only 2 seconds back from Kabush and 2nd place. “Part of me was pretty disappointed that the race was cancelled and that I couldn’t put up a fight another day. But the bonus was that we went for one of the best trail rides that I’ve been on. It was just perfect conditions, fresh snow, just a real treat. We got spoiled.” 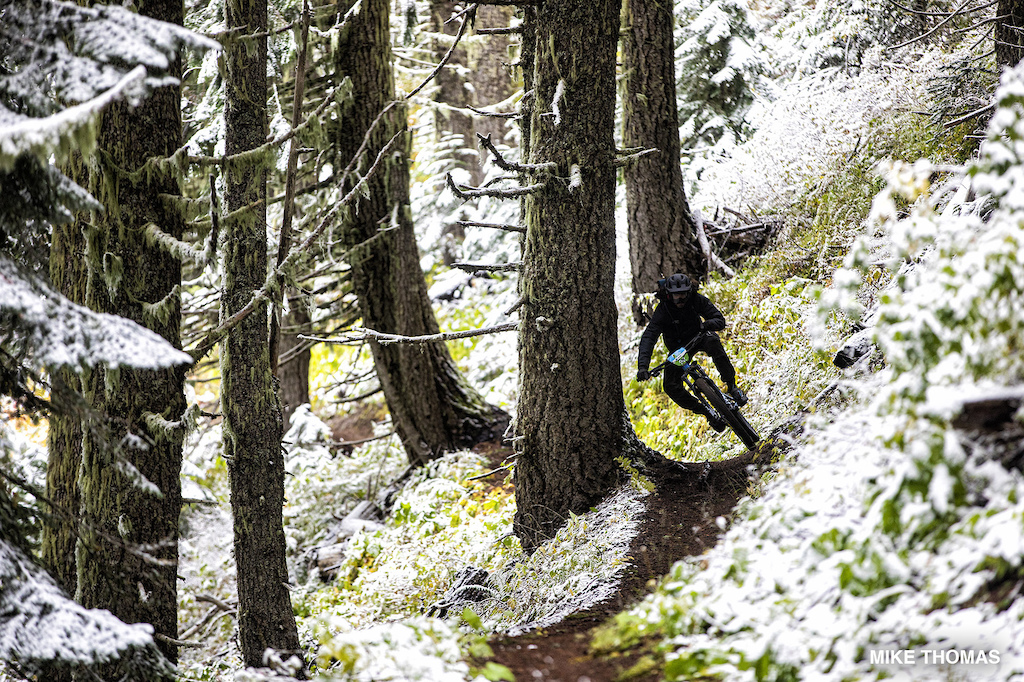 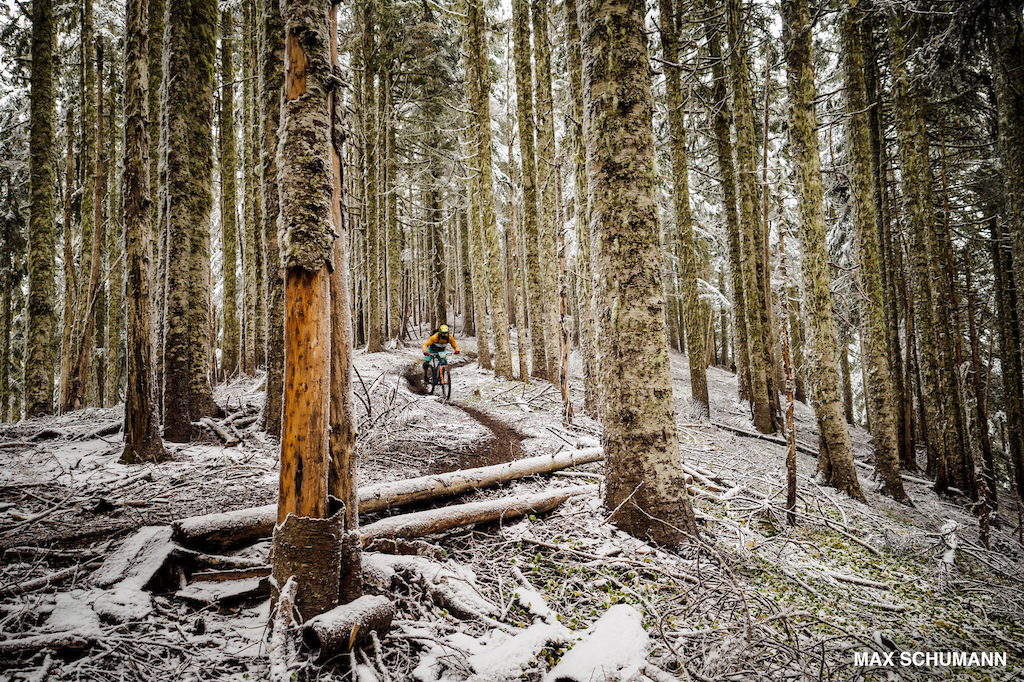 Chris joined a small group of racers and volunteers split from the main group and rode the designated racecourse to remove all the marking tape and signage. “We had a group of 18 and it was just a really, really good time to go shred, have fun, hang out, hoot and holler. I had only taken beer and wood to that point, so I was very underprepared for the rest of the ride. It was 20-something miles, and everyone contributed a little snack for me and away we went.” 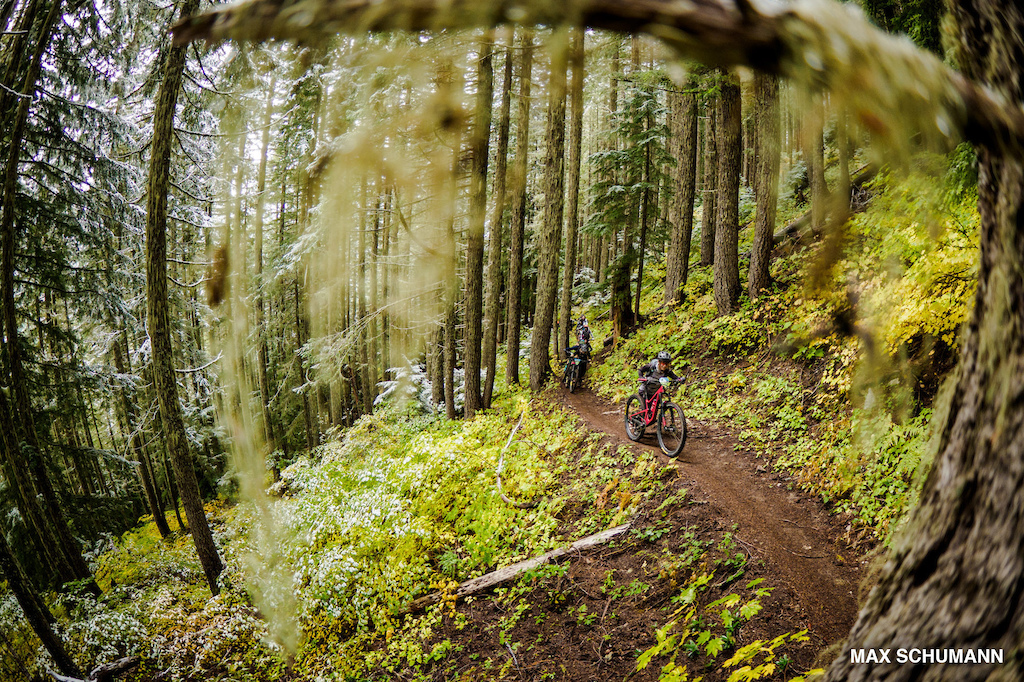 “Today is the perfect example of Trans-Cascadia, and the people surrounding it,” says Lars Sternberg. “The vibe was awesome, nobody was bummed, and I think that’s one of the coolest things about this event. It really attracts the type of people who are able to adapt and deal with adversity.” 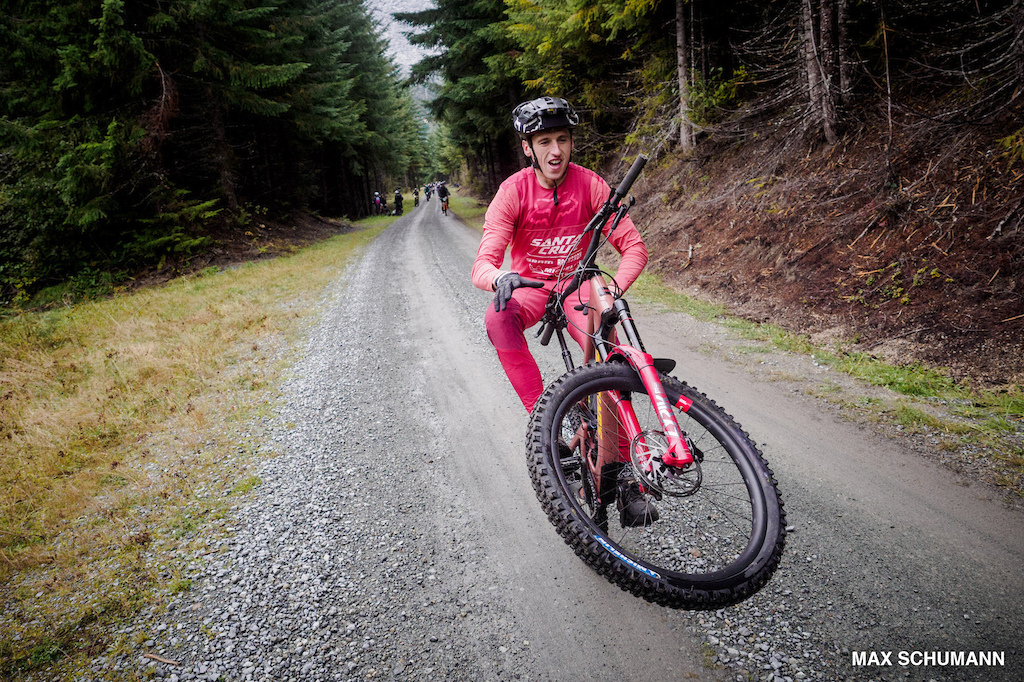 Back at camp racers were treated to a photo slideshow and videos from the race, champagne showers from the podiums, and truly heartfelt gratitude and recognition that spread from the organizers to the racers and volunteers and back in rounds of cheers and clapping. 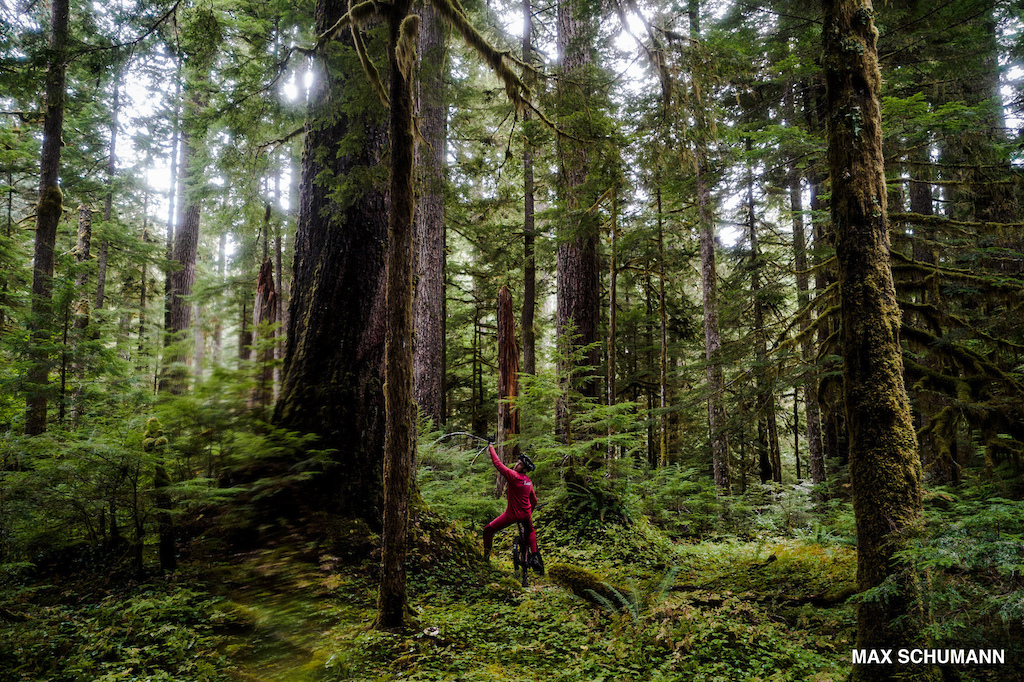 Morgan Gerhart and Lauren Jacobson won for the most time on course and were awarded sleeping bags and full riding kits from Patagonia. 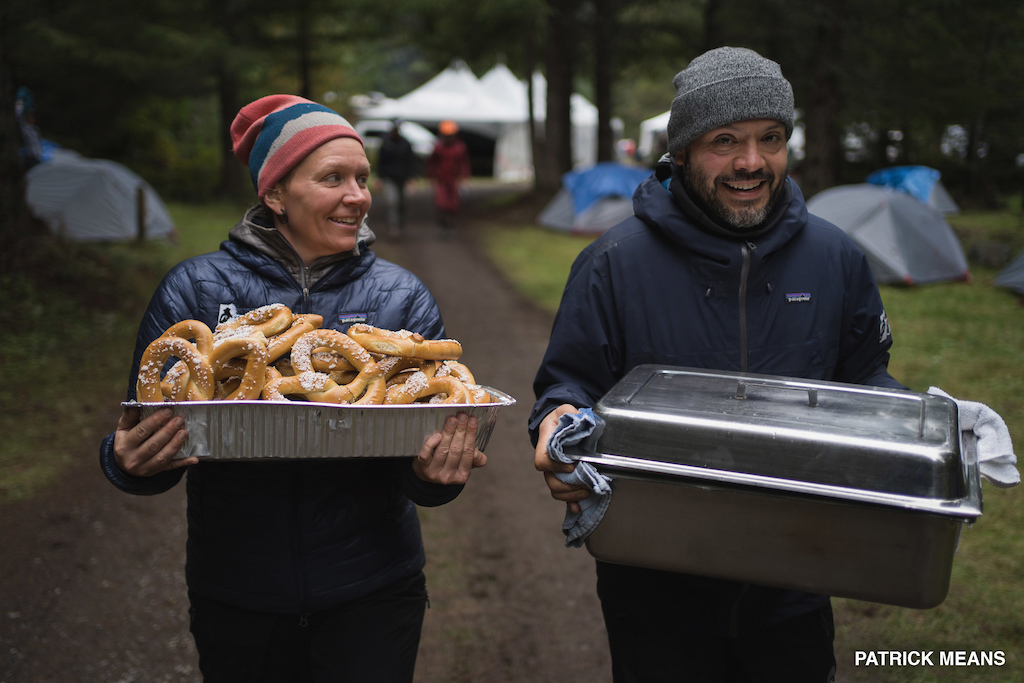 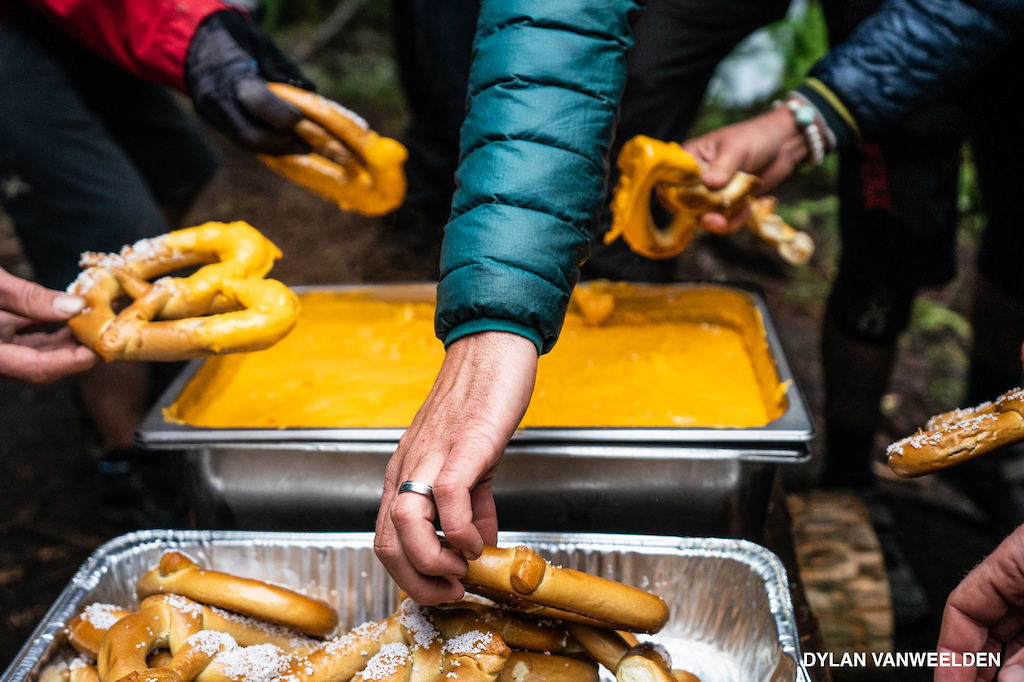 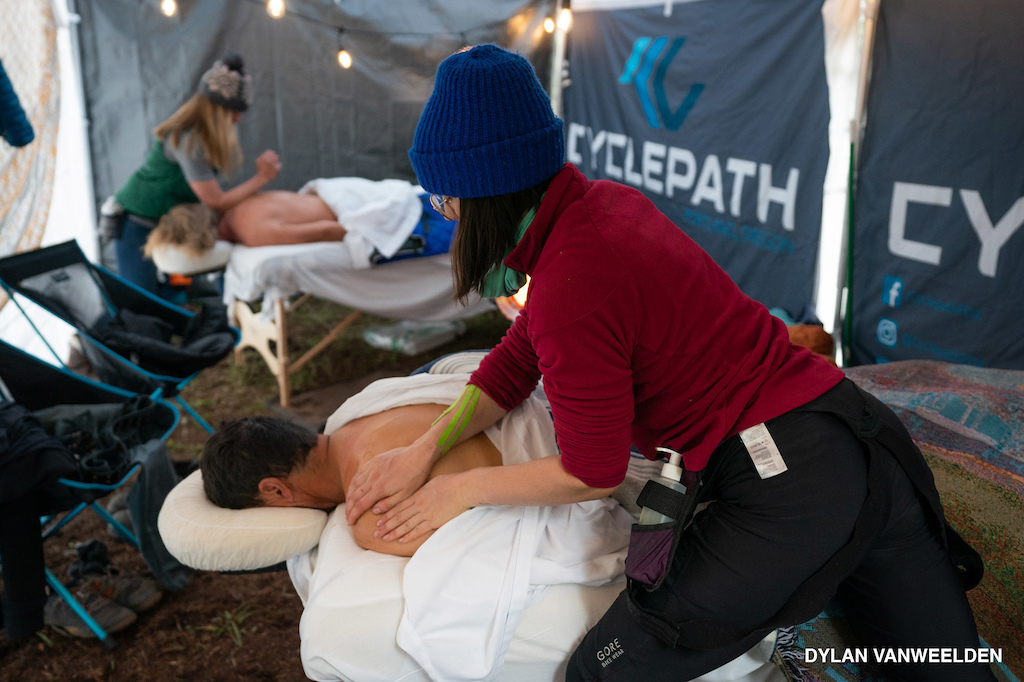 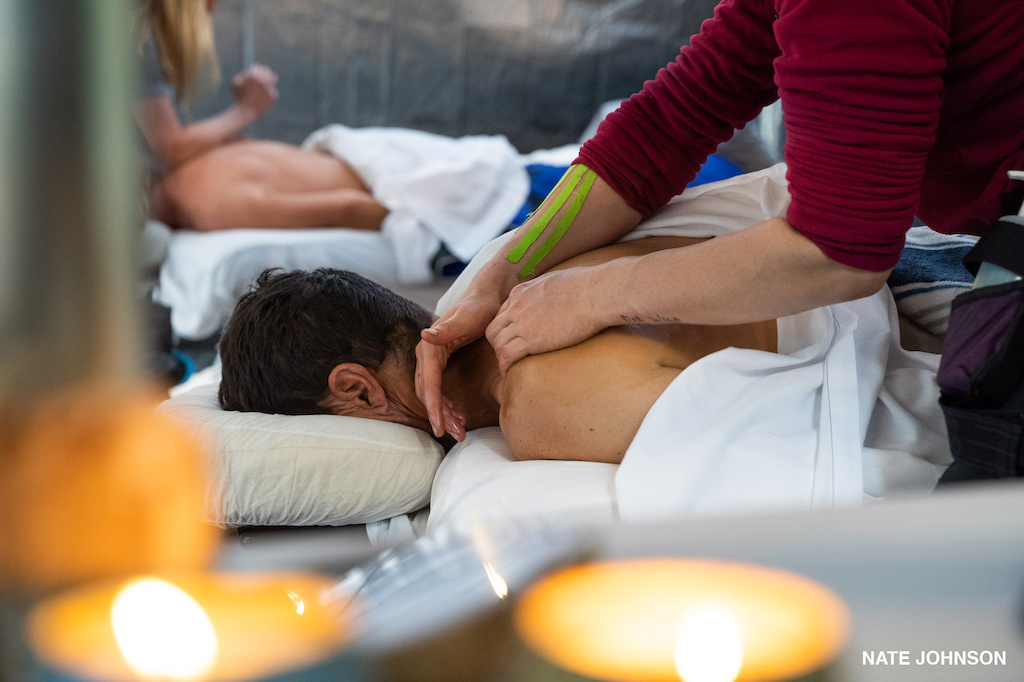 New this year as the Spirit Award which went to Jameson Florence who not only has raced all five years and attended all three work parties this year but also was a constant source of positivity and smiles on course. “It’s unreal,” says Jameson about winning the award. “I couldn’t be more pumped to be part of this thing out in the woods with these guys, I just come out here and play and it’s super fun.” 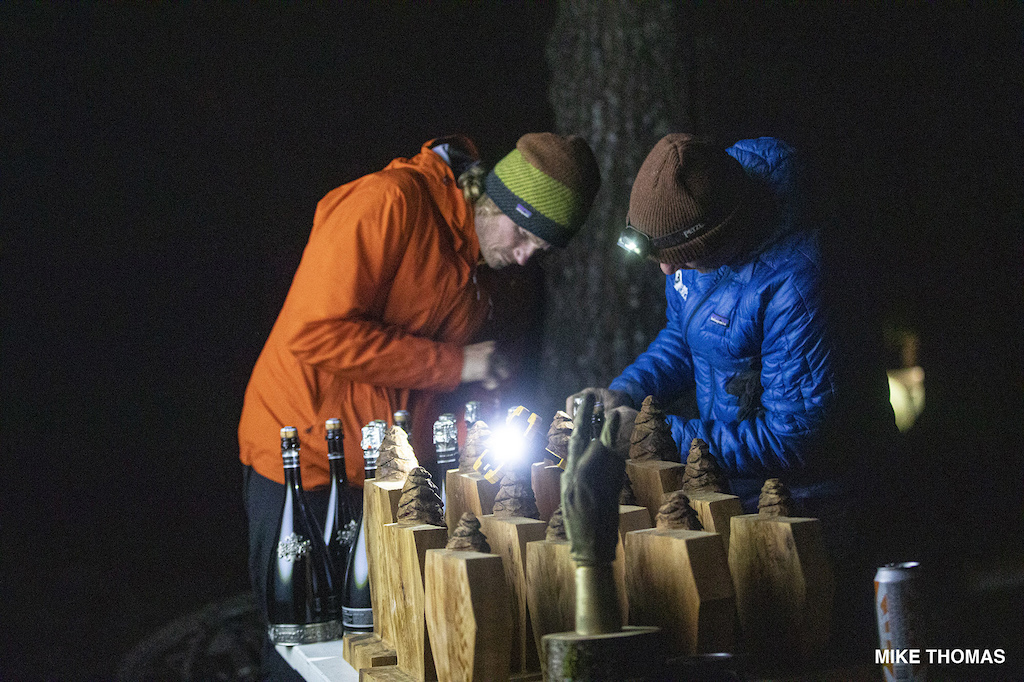 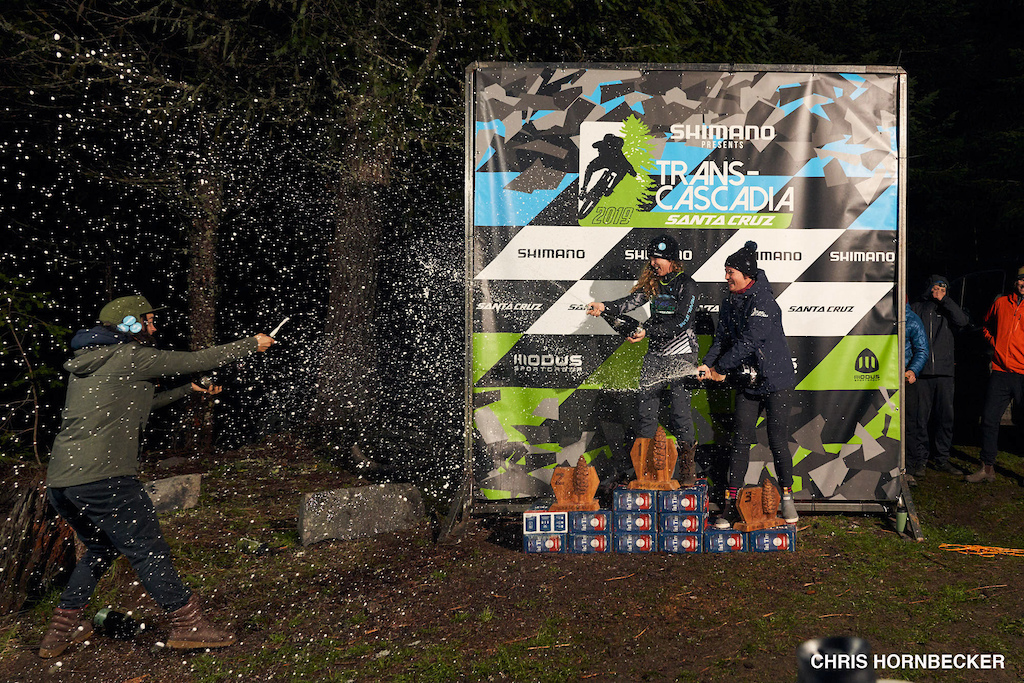 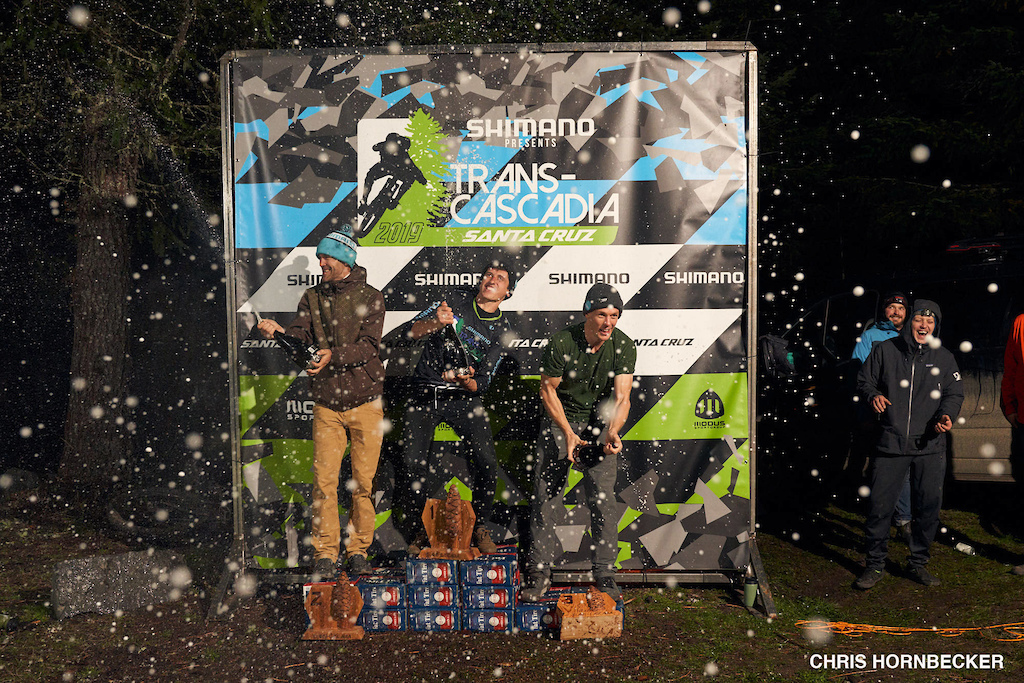 Locals, Remy Aucoin and Sarah Schmidt were recognized for their massive contribution of time and knowledge to help make Trans-Cascadia in the Gifford Pinchot National Forest possible. “Alex and I got to this new area and we called up these locals and [Remy and Sarah] met us at the trailhead,” says Nick Gibson. “We spent our first day in the woods cutting out this crazy jammed up system full of logs and clearing out this sweet descent. They’ve provided us with guidance on what trails to use and even on the Wednesday when racers arrived, Remi was up on the ridgeline brushing our trails. They have been amazing, and we couldn’t have done this without them.” As a thank-you, Remy and Sarah were given workwear from Patagonia.

When the speeches and awards came to an end the stoke carried on around the fire. “Trans-Cascadia was 100 times better than what I was expecting,” says Christina Chapetta. “It was amazing – and it’s still going. Anything can happen!” 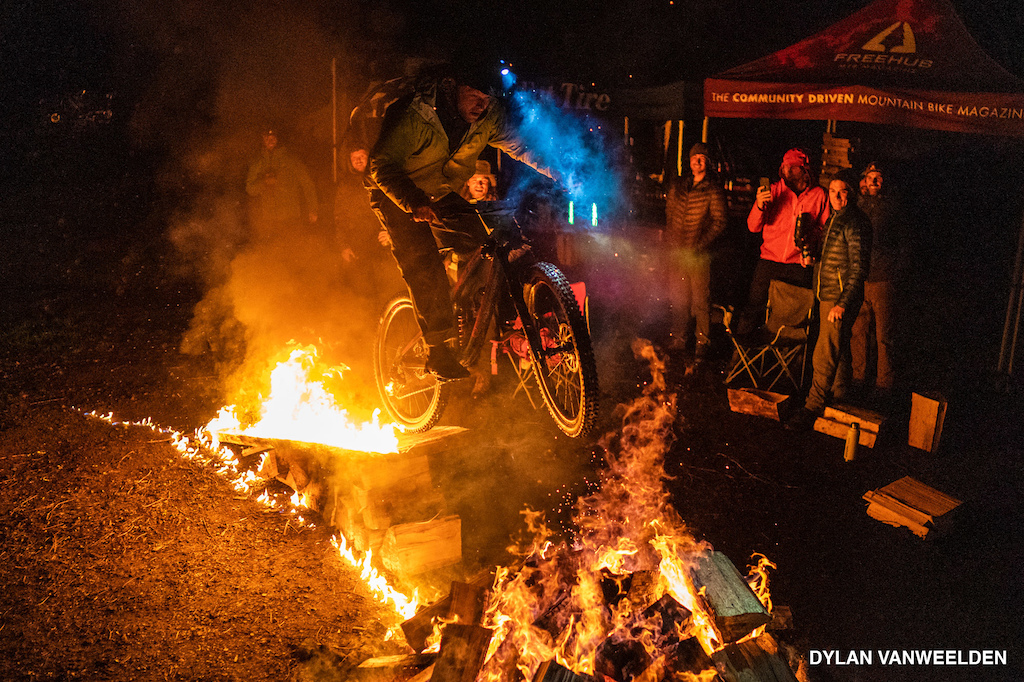 This event is under special use permit of the Gifford Pinchot National Forest.

mattsavage (Oct 1, 2019 at 8:50)
Can't race in snow, but will jump bonfires off flaming launch ramps after consuming copious amounts of beer... thumbs up!

RADVANBIKES (Oct 2, 2019 at 20:51)
Crickets in this commentary. Just like walking away from the bonfire to piss in the shadows. Must be awesome to be there. Alone in the woods with a hundred fellows, all gathered with similar interests; to share in the unknown pleasures of nature and enjoy it.

RuFfRyDaH (Oct 5, 2019 at 5:35)
German Max schumann with the pics on PB, nice! Event itself looks like Bucketlist

shredasaurous (Oct 1, 2019 at 11:06)
Flaming firewood jump at the end looks sketchy AF. Much good do approve