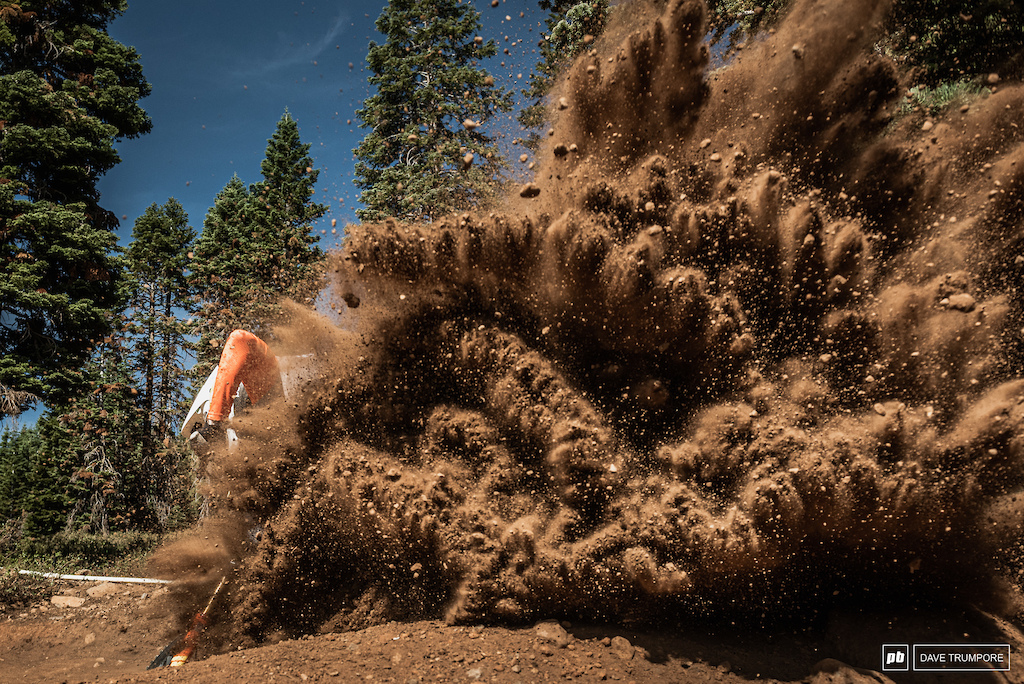 The results are in from the first day of racing in California, check out below to see live updates from today's racing. 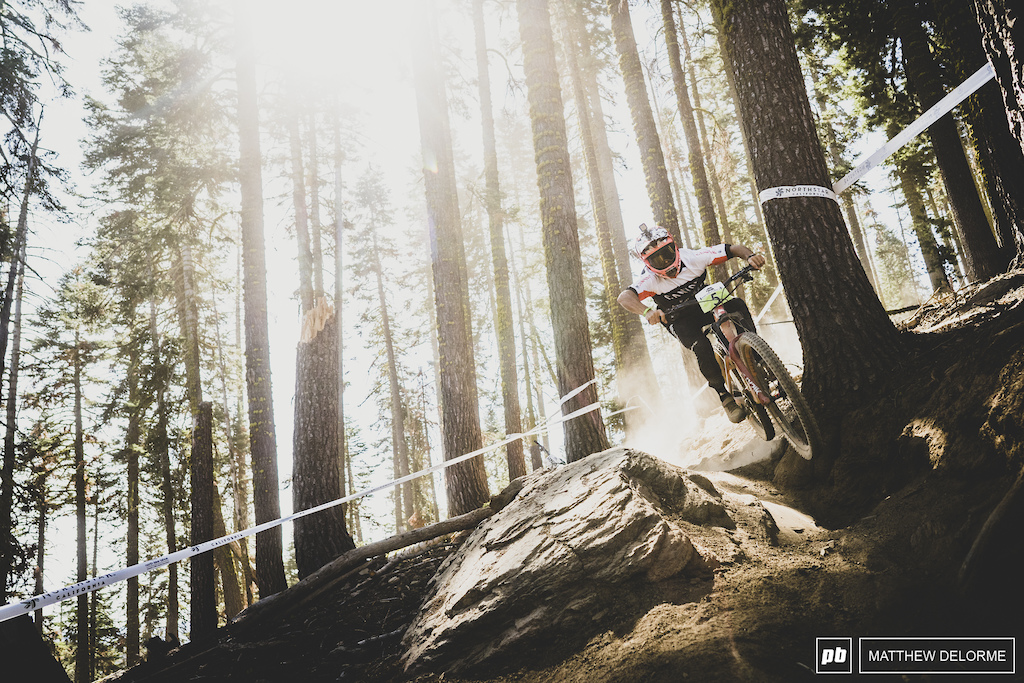 14:00 pm PDT We are set for two exciting stages as a weekend of racing gets underway in Northstar today. With everything still to play for in the overall title, the riders who can master the dusty and rocky trails can help secure a top result when the series wraps up next month.

14:48 pm PDT As we wait for the top women to hit stage one the Pro Men are starting to tackle the first stage of the day with Russell Bobbitt currently leading.

15:04 pm PDT Mckay Vezina goes the current fastest on split one by over three seconds on Geankoplis.

15:15 pm PDT The top women are making their way down stage one now, the organisers have extended the gap between riders to one minute instead of the usual 30 seconds because of the thick dust.

15:20 pm PDT Katy Winton finishes stage one with the fastest time so far. 3.95 seconds up on Makgill.

15:20 pm PDT Miranda Miller has a great first stage and comes across the line just over a second back on Winton.

15:22 pm PDT Ines Thoma manages to get even closer to Winton's time but she is still over half a second back.

15:39 pm PDT Martin Maes goes into the top spot on stage one with a time of 5:08.80. Will Maes return to winning form after his suspension from racing?

15:49 pm PDT Maes' time is starting to look good as no one has come close as we reach the top riders.

16:04 pm PDT Matthew Walker has a great start to the day with a time to put him in third.

16:09 pm PDT Sam Hill finishes the stage third, will anyone top Rude on the first stage of the day?

16:12 pm PDT Richie Rude wins stage one with a lead of over seven seconds. 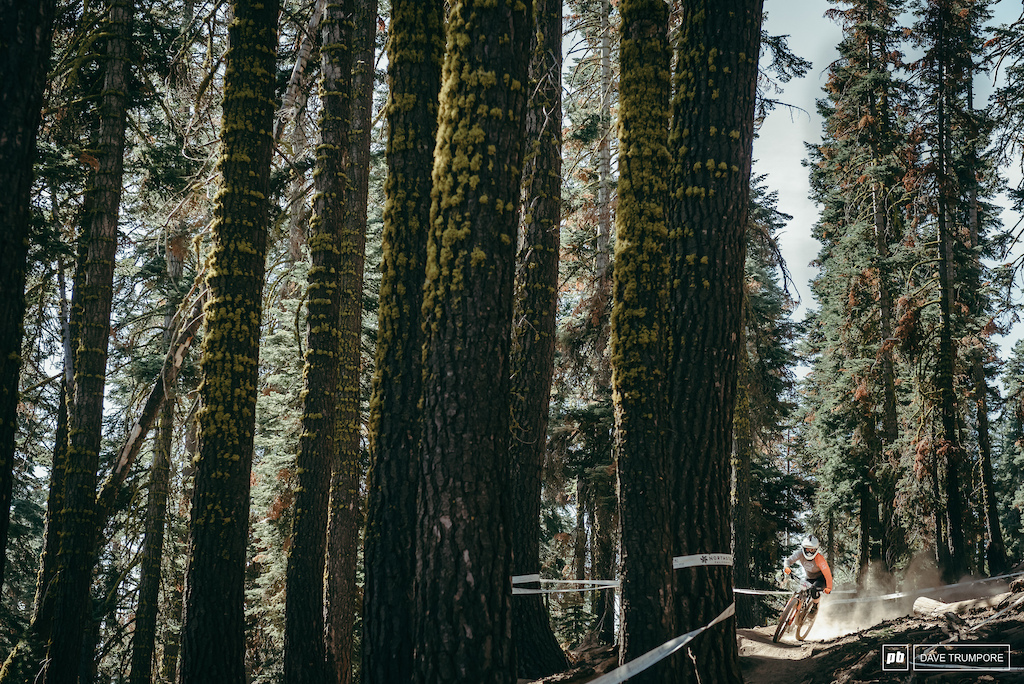 15:45 pm PDT While the top men are still tackling stage one the Pro Women have made it to the second stage of the day with Jennifer Makgill taking an early lead once again.

15:53 pm PDT ALN takes the fastest time of stage two so far by over five and a half seconds!

15:54 pm PDT Morgane Charre goes second and is back at the top of the race after an 8th place finish on stage one.

15:55 pm PDT Noga Korem repeats stage one and is fastest with one rider left.

15:56 pm PDT Isabeau Courdurier is just unstoppable this season and gets another stage win.

16:15 pm PDT After an exciting stage one the Pro Men are at stage two and currently Mitch Ropelato has a four and a half-second lead over Martin Maes.

16:36 pm PDT Kevin Miquel goes into fifth, over six seconds off the pace.

16:41 pm PDT Florian Nicolai finishes the last stage of the day 21st but there is no sign of Ed Masters.

16:50 pm PDT It looks like Ed Masters has crashed on stage and has yet to finish the stage. We will update you with the news as soon as we know more. Update: sounds like Eddie broke his wrist. We're gutted for you Towball, heal up soon!

Jaybirdy (Aug 24, 2019 at 14:33)
Seriously! What a Fun Race to watch unfold, these guys battling it out at #Gnarstar is really cool! Being a Nor Cal Local myself, it'll be really interesting to see how they ride and handle this race on trails I've actually ridden-!!

MonsterTruck (Aug 24, 2019 at 16:45)
Naw, I don’t want the race decided by a flat tire. Those doping scandals were pretty weak sauce in my book. They did their time. Let’s move on. @bashhard:

ihatton929 (Aug 24, 2019 at 19:03)
Am I the only one hoping Florian can make a come back and hold on to win the overall? Dudes consistent and fun to watch and somehow he's still the underdog.

blackapturphoto (Aug 24, 2019 at 17:06)
Heart breaking about Eddie. Was hoping he could take the overall

Ah, fark... Yeah, he was on stormer this year in both DH and Enduro. He was probably pushing quite a bit for the overall.

Now it is Sam’s to take/Florian’s to lose. Injuries and mechanicals (or ‘doping’) is not how we want to decide the championship

Mntneer (Aug 24, 2019 at 15:06)
Evan Geankoplis has been racing really well this year. It would be cool to see him lay down some heaters... And get me some points as the sleeper on my fantasy team

and Jesse is an animal, a beastly one too.

ajjrsons (Aug 24, 2019 at 23:21)
Part of the EWS80 there today.. yeah., we had less than 800ft of gain.. the top pros less than 1800ft gain. it’s hard to complain as a racer.. but the endurance part only really comes in on a cpl of long tough stages. Not the extreme endurance expected. EWS Whistler was not much either from what I heard.

VanNoche (Aug 25, 2019 at 11:22)
@ajjrsons: to be fair Whistler had a 20+ minute stage (5000 feet of descending) with several 1 minute sprints the first day, and 4000 ft of climbing with 5 stages on the second day. It definitely required endurance. I think everyone is stoked this weekend that there isn't much climbing with the descents being so burly! I'm stoked to see the series embracing diversity in terrain and stage format.

nohyphens (Aug 24, 2019 at 15:40)
A lot of the EWS related posts (youtube uploads, live timing, social media updates) have been kind of lacking this round.

davetrumpore Plus (Aug 25, 2019 at 0:15)
@aaronbullit: odd because they don't have a live race feed like this one you are commenting under... Haven't posted a event preview, haven't posted course preview video, haven't posted a gallery or story with epic pics from practice, etc etc... All of which is on this site. Did you not even look at either site when you posted that? So far those guys have posted a helmet cam with someone yelling a lot ;-) but that's it.

davetrumpore Plus (Aug 25, 2019 at 0:17)
@nohyphens: when you posted this comment the first day of racing was still not finished. Updates from events usually require the event to be finished or nearly finished... But the PB Instagram and EWS Instagram accounts have been firing off social media stories the past two days, as have many if the riders feeds.

gooutsidetoday (Aug 24, 2019 at 17:58)
Super bummed for Eddie! Good to see Sam smashing that 2nd stage, and Maes appears to be picking right back up where he left off. We all knew it'd be a fight for all of them

Garethccc (Aug 24, 2019 at 21:40)
Mitch, you're being greedy. First the Crankworks crown and now you're gonna take over EWS as well? Think of the other riders!

MarcusBrody (Aug 24, 2019 at 16:59)
Is ir just my perception or do the top enduro riders have more crashes (big or small) than the top downhiller's?

If it's true, why is that? Simply having five stages instead of 1? Riding smaller bikes? Being more tired? More flat or off camber corners which are easy to slide out on?

The top level of enduro is actually shockingly dangerous when you combine small bikes, less protective gear, and weariness of the riders with with these unfamiliar full-blown DH tracks they race down that seem to keep get getting gnarlier and gnarlier

makripper (Aug 24, 2019 at 18:30)
It can be argued that in DH. The idea is to ride clean and within your limits. You always know all the lines your are going to hit and hope they are the fastest ones that you can go fastest on. Enduro, you just ride as fast and consistent as you can as you go. No real studying or learning the track inside and out and know the multiple lines and ride as per condition changes. Completely different animals.

MoonboyMTB (Aug 24, 2019 at 18:41)
They are a lot more tired after thirty minutes of racing and lots of climbing than downhillers are, making them prone to more mistakes.

georgiamtbiker (Aug 25, 2019 at 10:04)
That's him. He has always ridden mountain bikes just not really raced. He started riding some endruo races last year. He has also won some xc races some years ago.