Australian Dean Lucas didn't have a great weekend at the World Cup race in Lourdes, France, with a DNF in a race that saw weather conditions turn the results sheet upside down. But while Lucas' weekend is probably one that he'd like to forget, I suspect that a lot of fans will at least remember his flashy Intense M16C that wasn't about to slip under anyone's radar. His custom painted Intense was done up with neon highlights, matching wheel decals, and more titanium and carbon bit than a fighter jet. 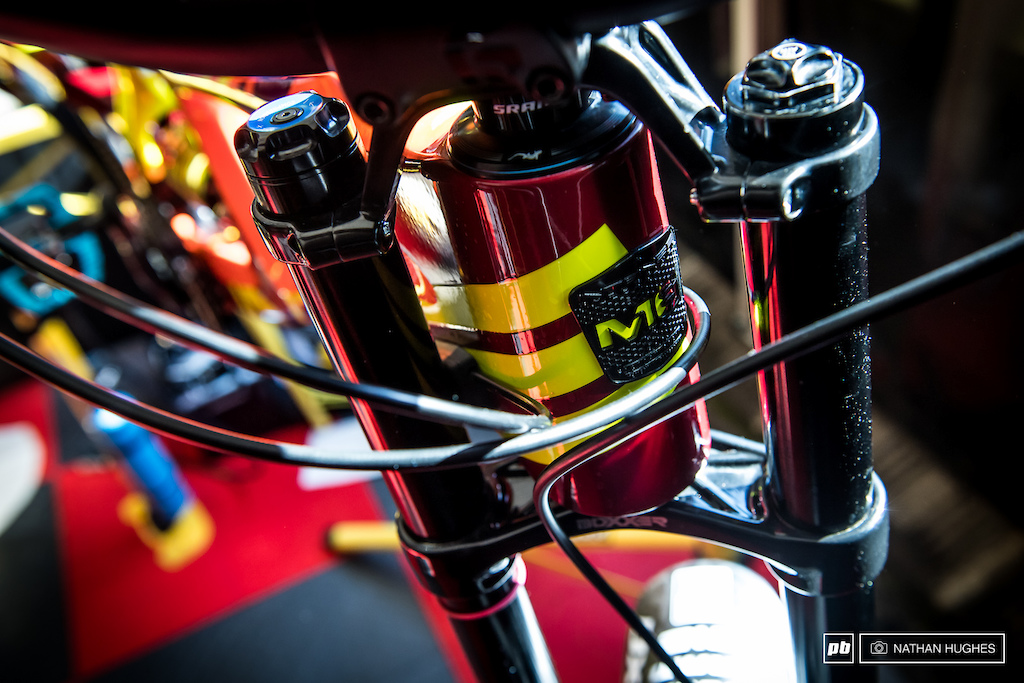 Dean's Intense Factory Racing M16C is assembled around a large-sized frame that's rolling on ENVE's 27.5'' M90 carbon wheels. The Maxxis DHF and DHR II rubber was set to 28 and 31 psi for the rough and fast Lourdes track, although I'm guessing that the storm that rolled in saw Lucas wishing for a set of 2.5'' wide Shorty tires. Like many racers did last weekend, he bumped up to super-sized 220mm rotors on both the front and back of his bike, pairing them to 2018 Code brakes. 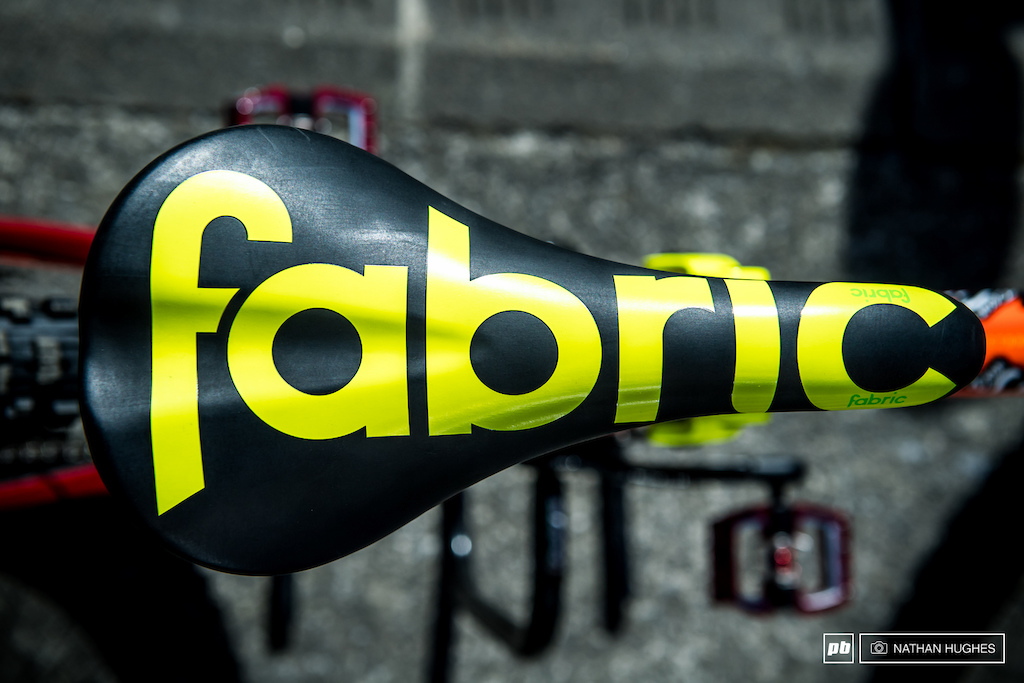 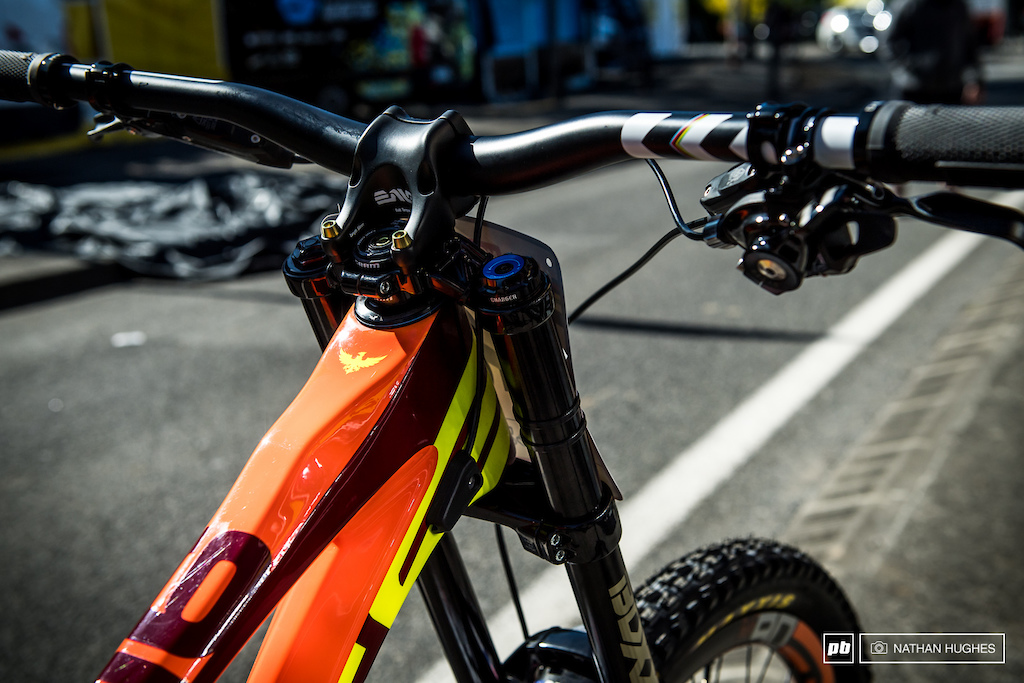 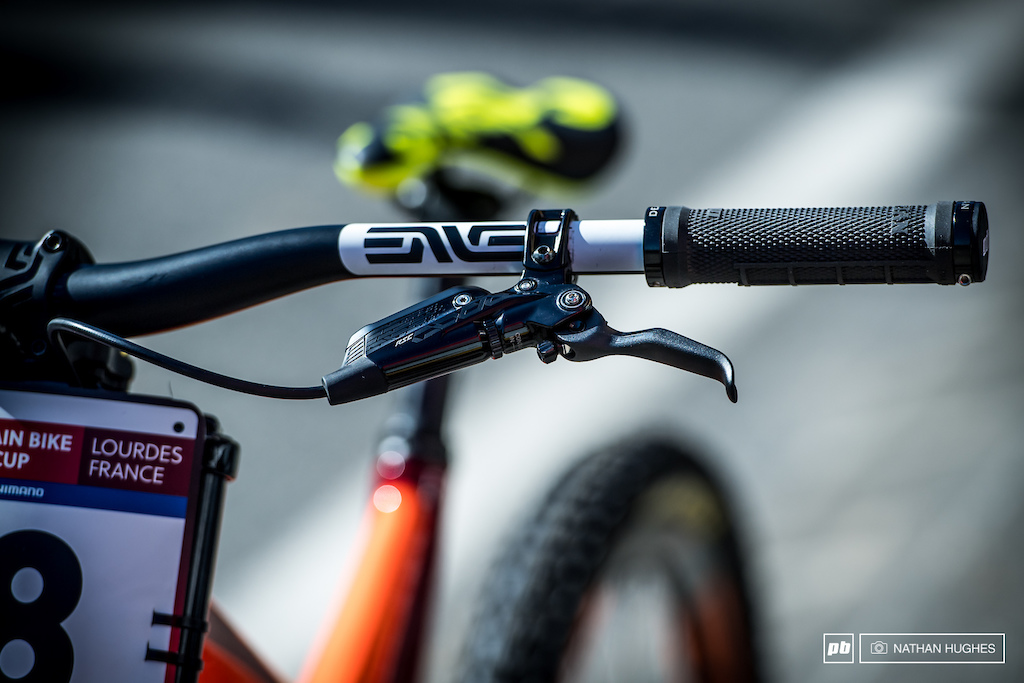 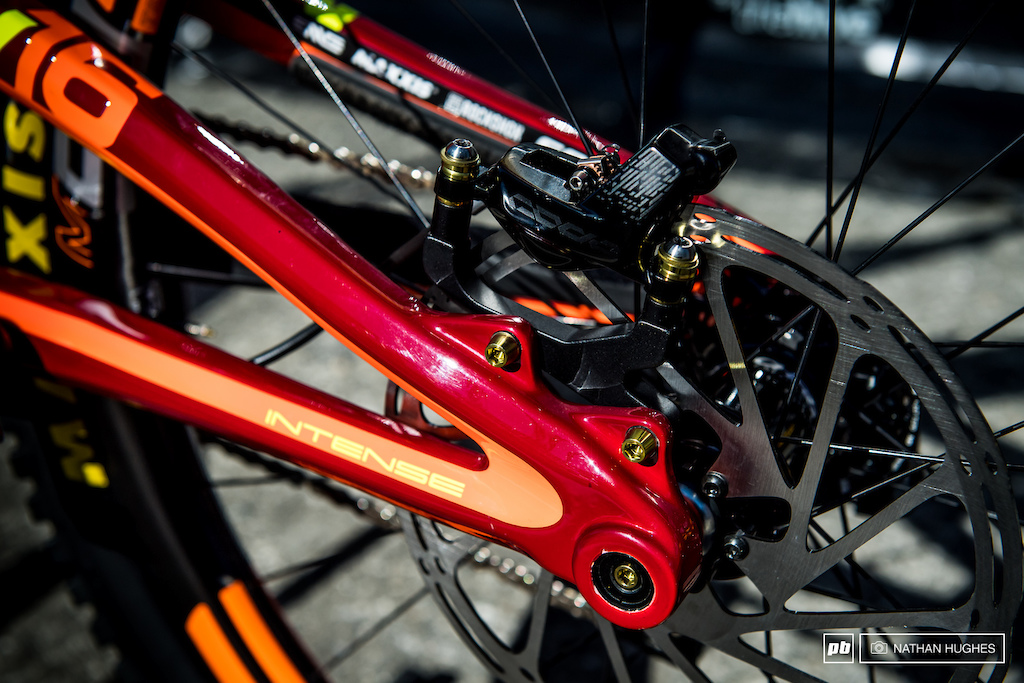 Suspension is an all RockShox affair, but Lucas chose to pair his air-sprung BoXXer World Cup with a coil-sprung Vivid shock on the back of his Intense. The fork is pumped up to 84.5 psi (you can never be too exact, right?) and has five Bottomless Tokens installed inside of it. The Vivid shock's spring is a 450 in/lb titanium number from Ti-springs.com, as is a lot of the hardware holding Dean's bike together.

While some racers shy away from carbon, Dean's M16C is dripping in it. Not only is his frame and wheels made from carbon, but he's also using ENVE's downhill handlebar (cut to 788mm), seatpost, and their carbon direct mount stem. All that's fastened to the bike with titanium hardware, of course. A set of 175mm X01 DH cranks adds to the carbon tally as well.

Coldspringer (May 9, 2017 at 18:26)
I don't think carbon is about weight anymore--its just about 'carbon.' Scott and commencal don't make a carbon DH bike and Amaury Pierron placed 8th at Lordes on a Commencal, and Adam Brayton's full aluminum build is undoubtedly my favorite on the WC

SavageDonut (May 9, 2017 at 19:05)
@FaastEddie: i think its something crazy like 29.7lbs or something. I only heard that somewhere though so don't quote me

FaastEddie (May 10, 2017 at 19:26)
@SavageDonut: I would love that. They just had the pros weight there bikes at Sea Otter and Richie Rude's enduro bike was 33 lbs. So i kinda doubt this will be 29lbs

leon-forfar (May 10, 2017 at 21:08)
@FaastEddie: It is pretty blinged out. Technically the "stock" build, but it's basically a dream build. No Enves, they're actually a bit heavier, but carbon cranks and bar, Fox 40/DHX2, Thomson post (carbon would be lighter). I reckon with an air shock, carbon post, and some other tweaks, it could be around 30 pounds. Frame only in XL with coil weighs the same as an XL devinci Spartan frame with an air shock

grafvonmarzipan (May 9, 2017 at 17:44)
This is a saddle made out of a special foam. Is realy comfortable and durable without any leader or textile only foam. This carbon version is made out of 2 parts and the TI and Cro-mo version is made of 3 parts This model Scoop have 3 shapes. Flat, shallow, radius. This on the photo is a radius one.

vinay (May 9, 2017 at 15:05)
Definitely flashy. But to answer the question, I think the Hope bikes are flashier. There is something flashy about anodized machined aluminium and Hope typically does a lot of that.

Decided I'd had enough of Intense after that and a few other issues.

nickkk (May 10, 2017 at 13:28)
@skelldify: that's pretty shit. I've never owned -or likely to own- an intense but I know even from back in the old alloy frames they were prone to cracking. Not great for such vast sums of money.

skelldify (May 10, 2017 at 16:21)
@nickkk: It should be a crime to charge as much as they do for defective frames. I was off that bike for 4 months out of 15 waiting on warranty parts. They eventually said they'd give me an entirely new frame, then took forever to ship it. When I finally got it, I promptly sold it (at a loss) and bought a Bronson.

Where do you ride?

skidrumr (May 10, 2017 at 6:54)
So no one else has an issue with the Boxxer lower leg sticker sitting at an awkward angle? Anybody? All that effort into paint and then a very obvious detail makes the thing look like a ghetto castoff. Surprised it doesn't have a fake hood scoop.

thisspock (May 10, 2017 at 20:30)
Does anything glow in the dark? Dam I love the way this looks. I hate to say it, but these are the colors I would choose as a child, before I became a bitter adult. I totally dig it.

pinnityafairy (May 10, 2017 at 5:07)
Looks like it should be sponsored by McDonald's. Do you need big red floppy shoes when you ride it.

newenglandrocks (May 10, 2017 at 5:34)
Clearly the genius behind this is a colorblind man who was kicked out of fashion school

fattyheadshok (May 11, 2017 at 4:44)
Hey, hey, hey! I'm colorblind for real. I love these colors. They're visible!! Most of the colors people choose for things look drab and depressing to us colorblind folks. It's not that we don't see colors. It's that they just don't pop and contrast the way they do to others. Seeing loud colors is exciting to us. Trust me.

pinnityafairy (May 12, 2017 at 4:05)
I thought the spring looks really good I think the bike in those colors would make anything you put on it look bad.

pimpin-gimp (May 10, 2017 at 4:58)
@sonofbovril if the carbon is finished as badly as their aluminum bikes are aligned it wouldn't be worth looking at!

Doomsdave (May 10, 2017 at 18:51)
@pimpin-gimp: no shit. My 2009 Uzzi rear triangle was way out of alignment. I called and dudes acted like they had no idea what I was talking about. Yeah right. That was disheartening. I did however give them another chance and they "totally redeemed themselves" Dumb n dumber style. I have a 2016 Uzzi and it's a very very good bike. For what it's worth.

gonecoastal (May 10, 2017 at 7:38)
Why is one half of the Syndicate running SRAM and 275 and the other half on 29ers FOX and Shimano?
Below threshold threads are hidden