Deathgrip: Brendog and Ratboy Shred the Best Track Ever - Video

Deathgrip- A film by Clay Porter and Brendan Fairclough is available for digital download on iTunes, Amazon, Google Play, and more. 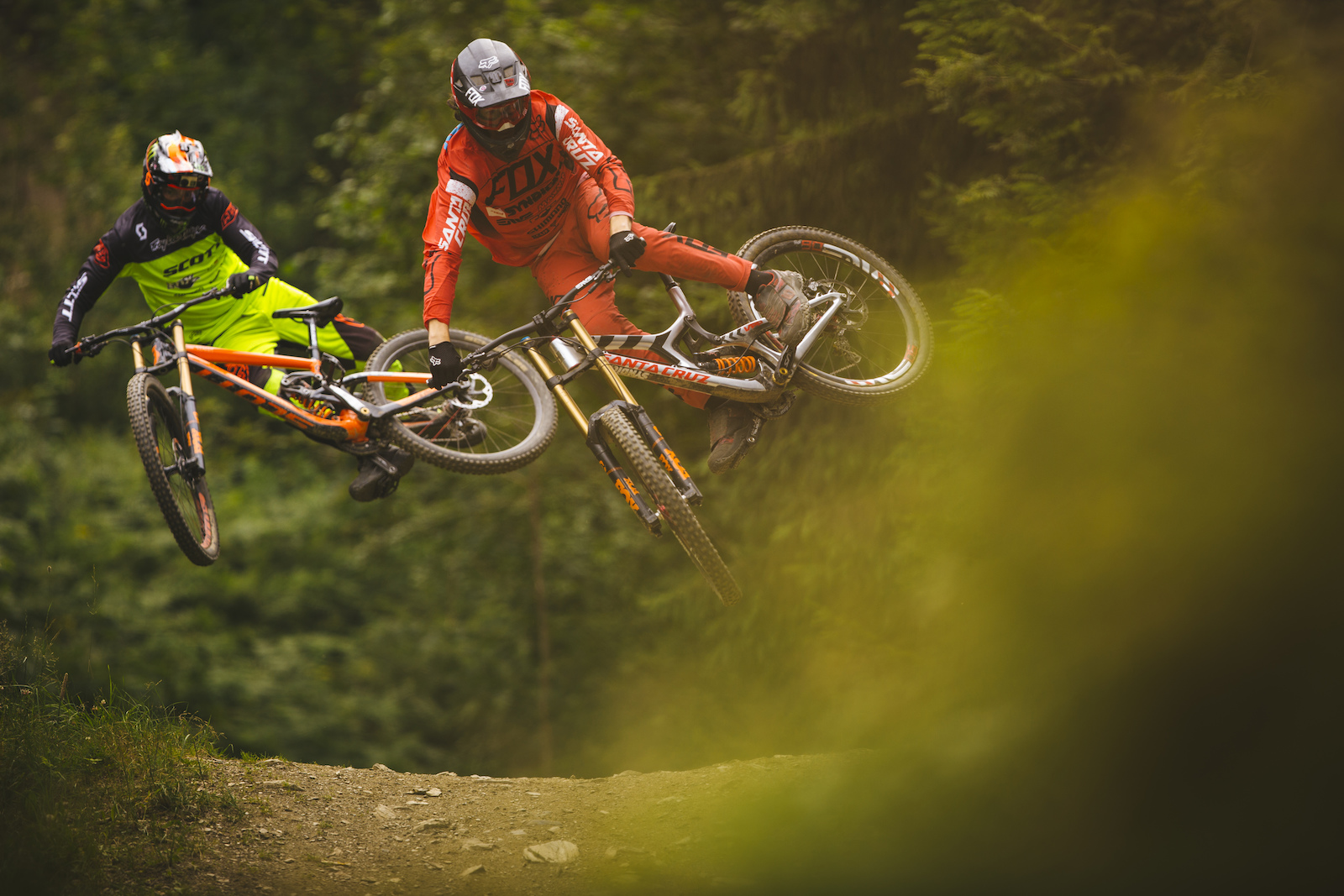 Produced in partnership with Raised By Wolves

thedriftisreal (Jul 24, 2017 at 21:04) (Below Threshold)
@mprosper: HE HAS RACED I THINK THIS GUY IS AN IDOIT FOR NOT KNOWING THAT. you can't overlook a legend.

ScandiumRider (Jul 24, 2017 at 11:50)
While the riding is out of this world good, can someone explain to me why this is "the best track ever" and most of the racers complain loudly that other tracks are "too bike-parky"? This just looks like a wide open, bermy, jumpy, bike-parky, flow track to me. What makes this better than the others?

I'm honestly not trolling, I just don't ride enough lift-accessed DH to know where the line is drawn between "awesome" and "too bike-parky"...

F22 (Jul 24, 2017 at 12:11)
This kinda isn´t the
downhill track. Well it is, but is the bikepark version of it. The race version has a gnarly part through the woods and some unbelievably steep off camber grass turns.
But despite having raced there a few times I honestly think it´s a great track but nothing too special either.
I still don´t really get the Schladming was so great/ the best ever thing nontheless

ka-brap (Jul 24, 2017 at 12:28)
Well, they didn't go into the wooded sections (I can only assume because the light sucked for filming?) but while this track has a lot of "man-made" sections to it, it is not strictly "bike park". Bike parks (like Leogang) love to use pulverized stone & small gravel that almost feels like cement. It takes a beating and drains well, but it's simply not dirt and it rides like shit. Schladming may have a lot of man-made sections (berms, jumps, etc.) but it's almost always dirt. It requires more maintenance since it will get beaten up more, but it simply rides way more awesomer.

What you also don't get from this, or any video, is how well laid out the track is. Aside from a road crossing, there aren't any boring sections or flat traverses, etc. The corners are perfect, the technical bits still have great flow to them.
When you ride a bike park that simply has too many turn and flattens out the natural terrain, it's boring as all hell. That's what doesn't happen at Schladming- it's steep, rough, and flat-out from start to finish in a way that rides really, really well.

It's not the most technically challenging course- no one is making that claim. That honor probably goes to Val di Sole. But this track is a blast to ride, from start to finish and it doesn't have any boring sections to it.

kram (Jul 24, 2017 at 13:51)
Agreed. I kinda thought to build the best track ever you have to start by throwing the keys to the dirt moving equipment in the lake and grabbing a chainsaw and a pick axe. Kickass riding though.

ScandiumRider (Jul 24, 2017 at 14:49)
@scott-townes: Well, considering Brendan is of the opinion that a track like Leogang is too bike parky, I was just curious what the difference was in other people's opinions... I'm not really looking that hard into it.

ScandiumRider (Jul 24, 2017 at 15:00)
@ka-brap: Thanks, this is a great explanation. At about 4:00 there's a short wooded section, and that looked way more technical, but they went right back out to the flowy bits. Maybe you're right and it's a lighting thing.

Interesting about the trail surfacing, and I can understand why that must feel terrible to ride on.

Loki87 (Jul 24, 2017 at 17:01)
There´s also a lot of stuff not shown in this vid.
It´s true there are lots of berms but in comparison to Leogang those berms are built in a way they´ll hold you in even at insane speeds just so they can spit you out into the next section where roots and rocks await you.
If i had to explain why it´s great, it is because they mixed perfect berms into a technical track in order to enhance the technicality by increasing the speed with which you enter the technical sections.
It kinda feels like those (few) awesomely built homespots, where there are lots of natural elements linked by meticulously crafted berms in just the right spots.
Tracks like Leogang, they have those wiiiiiiide sweeping berms. They do not compress you into the berm and shoot you out like those in Schladming. And while they can be ridden fast, that feeling of acceleration a smaller, tighter berm gives you imho is what makes them fun. Also, in Leogang after a turn there´s just either another wide seeping turn or a flat section without any roots or rocks.
And finally, Schladming is a rather steep course throughout it´s whole length, so again, those berms and technical bits in conjunction with the steepness create some quite challenging terrain.
Sadly they did not show the rooty and rocky sections in this clip, but they do exist, even if you´re not riding the lower race track part in the woods.

game (Jul 24, 2017 at 17:46)
@ka-brap: "Bike parks (like Leogang) love to use pulverized stone & small gravel that almost feels like cement"
really???? Thats pretty major, I feel even more spoilt now with whistler up the road.

ldhbaker (Jul 24, 2017 at 18:17)
My thoughts exactly: this looks like the bike-parkiest track of them all in the video. Great riding, but nothing that a guy like me couldn't get down (with 1% of the speed and style). I only have so much patience for the DH track complaining.

stefkears (Jul 25, 2017 at 8:36)
@ldhbaker: not everyone could get down it, it's raw and so flat out, the speed you can carry into and out of sections at schladming is really next level. Go watch some of the older earthed videos when they used to race it as a wc track and listen to the riders comments. I've ridden both bikeparks and schladming is a different beast to leogang

And it really can't be stressed enough how much "more grade" can have a big effect on how a track feels.

Wish I was still going next year, but oh well.....

Sycip69er (Jul 24, 2017 at 9:23)
WC fast with tricks. Unreal. I need to know if Brendog and Ratboy need rear wheel rebuilds after a day like that. No way those wheels are true after all those sideways landings.

bentown (Jul 25, 2017 at 1:09)
@chris-barr: It is a 27.5 but he does ride the 29er Hightower as well in several vids and has raced enduros on it. He's also commented in interviews that he likes them. He actually seemed real chill and was like just ride whatever is fun, which is how we should all be. I dunno why there has to be a 'thing' for hating on 29ers to the point that people take a cool rider and assume an opinion that they might have.

DrCheck-iLL (Jul 24, 2017 at 7:52)
Definitely the best track ever, so much fun to ride. Such a shame that Leogang is the host for the WC race in Austria now.

ka-brap (Jul 24, 2017 at 11:33)
2 seconds out of the starting gate, you hit a 3m gap to step down that feels like you're falling down an elevator shaft. Of course, they make it look like nothing, most everyone watching probably doesn't even realize it

From that moment on, it's game on, 100% non-stop awesomeness until you reach the parking lot. So sick

MSVF (Jul 24, 2017 at 23:06)
Well, i guess that Leogang has not stolen the WC from Schladming, it's more like Schladming can no longer support or fund a WC stop. I don't think that UCI wouldn't allow two WC stops in one country.

daweil (Jul 24, 2017 at 9:55)
Amazing to see WC riders shredding park without the "got to be the fastest down here now" approach, what a great edit

patrickbatemanworldtour89 (Jul 24, 2017 at 9:46)
The riding did melt my face off, I think these two could make almost any track look like the best track ever.

Similar as in the Semenuk-Revel videos btw...

gbcarmona (Jul 24, 2017 at 14:00)
These two might not be the fastest on the clock, but surely they are the most stylish and cool to watch. Ratboy is still my favourite rider ever and i wish he was still racing and mixing up with the top lads. Awesome clip!

whattheheel Plus (Jul 24, 2017 at 10:07)
So damn rad!! I loved the differing line choices and nose bonks and steeze!! And subtitles are needed at all time for Ratty!!

flaflow (Jul 24, 2017 at 13:28)
My thought as well. The answer (probably) is Brendogs skills are not the same skills those top 10 have. Bike control he has, but the ability to let your bike get up to (race winning) speed, this would be something else. Watching Gwin at the last WC, like 3 seconds faster (before the flat) than Minnar had done. Amazing!

OriginalDonk (Jul 24, 2017 at 11:39)
"We rail berm at Schladming." What a relaxed Rat might sing after this ridiculous session.

landscapeben (Jul 25, 2017 at 5:44)
Once I finally got passed the first 2 solid minutes of off-putting slo-mo, the rest of this video was ripping!

Lost count how many times I've watched this? Sick ridding with a top matey.

patrickbatemanworldtour89 (Jul 24, 2017 at 9:18)
Where are all the rock gardens and fall lines? If the UCI sees this every track will look like leogang

bigburd (Jul 24, 2017 at 12:40)
I think you have subscribed to a website that features mountain biking by mistake judging by your disappointment.