Join Pinkbike  Login
World Cup photographer Fraser Britton recently uploaded an image that got me thinking. It was of a helicopter holding a camera that was able to adjust to any angle giving you an infinitely adjustable tripod! After doing some looking around and research here is some information on the company called DediCam!

Check inside for more details...
<Deleted photo>
It is an eight motor powered helicopter that is capable of being ran for 15 minutes on a battery charge. What makes this setup better than your RC helicopter or plane? A couple things. Not only is it capable of holding a camera, but there is actually an operator that goes along with this to control the camera!


by spoiledgoods
Views: 13,666    Faves: 54    Comments: 12
By the looks of things it consists of two people, a pilot and a controller. The pilot directs the helicopter in the direction it's supposed to go while the controller controls the camera to get the shot. Pretty neat sounding, but the next thing is what makes this setup even cooler. The controller puts on a pair of goggles that show you exactly what is being seen on the screen of the camera, in order to make video and photo shooting easier on the controller. 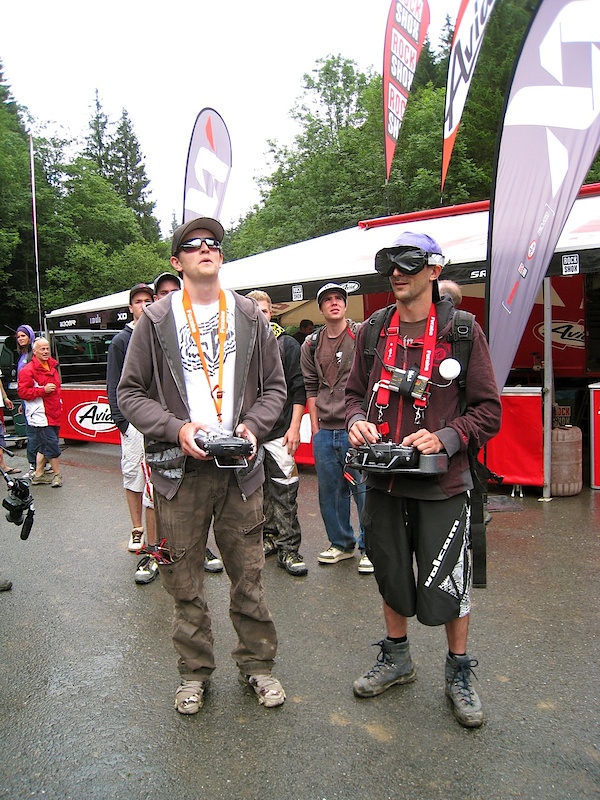 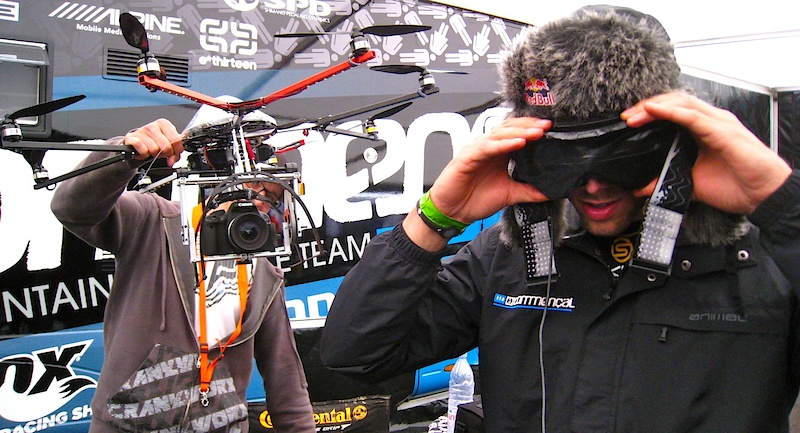 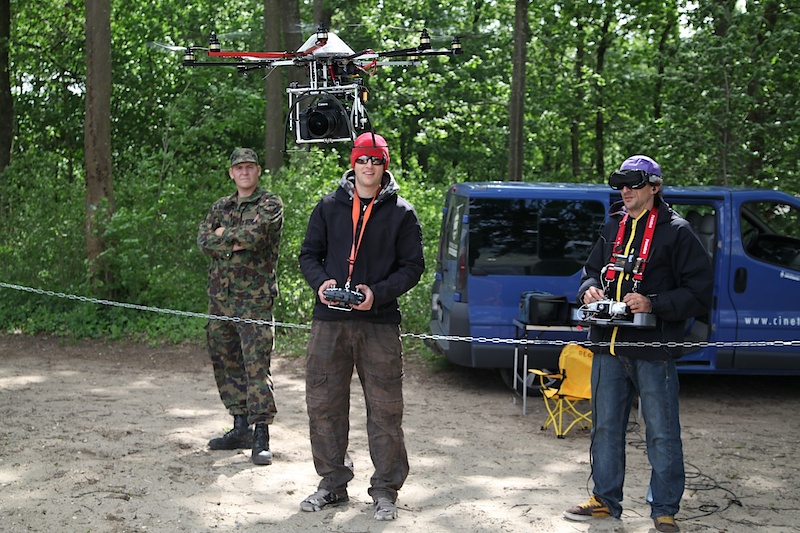 What a sick setup! I'm hoping to see more of the DediCam footage in the future because it is sick!

What are your thoughts on this setup? Comment below!

santacruz-syndicate (Jul 27, 2010 at 19:28)
no shit, that is probably hands down the coolest home built thing ive ever seen! just think of all the epic shots u could get with that thing! just dont crash it :/

RaleighVoid (Aug 2, 2010 at 4:23)
theres gonna be an explosion of DIY DediCam films online im sure. this could revolutionise DH WC coverage and potentially get it broardcast on mainstreem TV...? nevermind the potential for football (soccer) coverage! this is awesome! no doubt the next 'colective' film will use this technology.

RaleighVoid (Aug 2, 2010 at 4:25)
and all i can think about is poking that guy in his side (the blindfolded controller)

Maksimbike (Jul 27, 2010 at 14:30)
Looking at the first photo im like *ok small heli with a tiny helmet cam* then i watch the video and the quality is amazing. Im blown away, then I fanally see the big picture, and that aint no toy.
Sick work guys! Truly amazed by your creation.

radek Mod (Jul 27, 2010 at 14:36)
Yeah, you can actually see in one of the photos the camera that they use is an SLR. Probably a 7d or similar so the quality can be as good as those cameras or similar can be. The HD footage from the 7D is used in films, so you could use this in a bike film.

tgreid (Jul 27, 2010 at 14:58)
this could be the end of heli shots, as this probably costs the same as a few hours of heli time, then it's already paid for. I'm betting we'll see a lot of this in upcoming bike films. I know surf movies have been starting to use remote helicopters:

although this dedicam looks much more stable.

tmacinc (Jul 28, 2010 at 6:14)
There's other companies that make a way nicer version of this that only requires 1 operator. It's upwards of 20 grand though. Has an autonomous flight control system so it can hover and land by itself and easily be flown by a single operator while they control the camera.
www.draganfly.com/uav-helicopter/draganflyer-x6

stever (Jul 28, 2010 at 7:40)
That Dragonfly is crazy-cool. It seems to me though that it must be incredibly difficult to operate both the heli and the camera simultaneously.

tmacinc (Jul 29, 2010 at 5:48)
You can get a headset that displays live video from the heli and is gyro activated so when you move your head the camera moves. So you basically fly the heli from the point of view of the heli and then move your head around to keep what you're shooting in frame. I've seen this done with regular rc heli's and planes but the sensors and control board on the draganfly make it easy enough to fly that anyone can do it.

teeone (Jul 27, 2010 at 15:02)
The swiss movie VAST owned this capture technologie... same start up, but with this engine www.dedicam.tv/images/stories/food/dedicopter02_big.jpg

knutoslo (Aug 1, 2010 at 5:19)
Waiting to see future pro bike movies with the help of this setup. Check out this amazing short film made with a Trikopter following DH riders down the trails of Hafjell, Norway

PvDH (Jul 27, 2010 at 14:02)
That was way to sick. Like jaw dropping sick. All the possibilities for filming and photography are out the door now.

jojotherider1977 (Jul 27, 2010 at 14:08)
i'd be interested in how the the controller is getting the video from the camera? I think that would be useful for stills as well.

Keep the videos coming coz they are fantastic!

ivanlitovski (Jul 27, 2010 at 15:32)
Now anyone who has a lot of money, and no knowledge of video producing can make an awesome video. But in the right hands it's gonna be... wooow

RinkyDinkyStinky (Jul 27, 2010 at 15:58)
This has me stoked beyond all recognition. Ride movies are going to be absolutely amazing once these things get in the hands of the right people.

RinkyDinkyStinky (Jul 27, 2010 at 15:58)
Wait till the anthill guys learn how to operate one of these things, if they're not already.

artbarn (Jul 27, 2010 at 20:56)
check out the RC heli action in this. its soon to be another redbull action sports classic
www.youtube.com/watch?v=2zs-Ge_cmI4&feature=fvw

i saw this with simple camera on youtube few months back, but i don't mention that this shots may be so quality and sick flowy

BrotherDarkness (Jul 28, 2010 at 11:50)
i feel like were gonna see this a lot in bike movies. gives you angles you cant get without a heli but im gonna guess its a little bit more affordable

bfdrider (Jul 28, 2010 at 21:23)
imagine the possibilities that thing could open for shooting locations that can't facilitate a zip line, and better overall coverage for all sorts of events!

johnny2dillard (Jul 27, 2010 at 13:24)
That thing is incredible! It's amazing how steady it can fly. The possibilities are endless!

ghosthack2501 (Jul 28, 2010 at 1:38)
Hah i think they use this or summat similar in Ghost Recon:Advanced Warfighter! Really cool and nice steady shots. Kudos.

jerryhazard (Jul 27, 2010 at 13:14)
Saw that photo when it was originally posted, thanks for clearing up my confusion. And great, another cool toy I have to lust after...