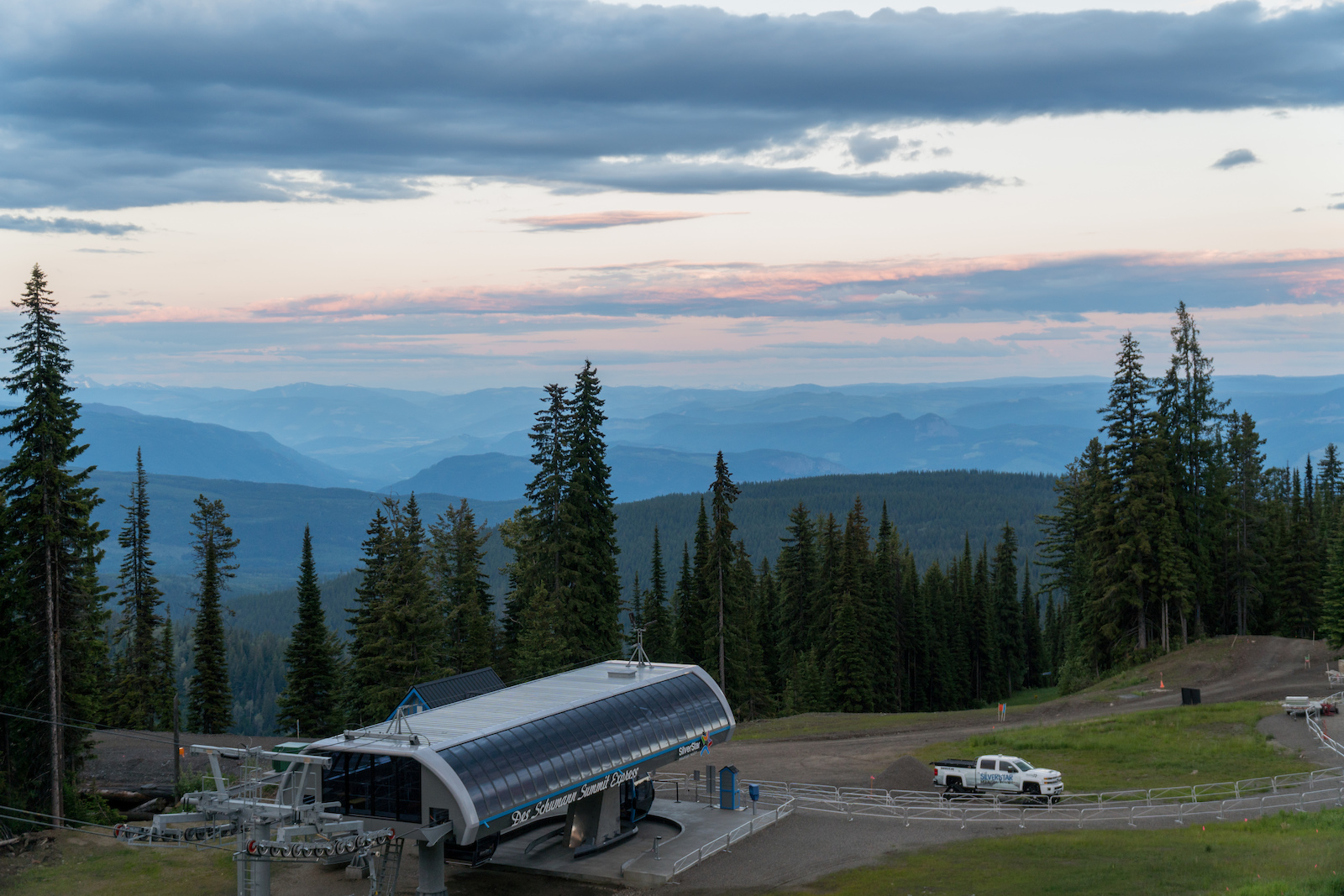 Silver Star Mountain Resort
Photography and Words: The Free Radicals
Silver Star Mountain Resort is located in the Shuswap Highlands of the Monashee Mountains, a short 30-minute drive northeast of quite the lakeside community of Vernon, BC. Outside of Whistler, Silver Star has by-far the most established mountain bike trail network in the province. The mountain boasts a vertical drop of 760 meters, or just shy of 2500ft, with 40 mountain bike trails - the majority of which are blue rated flow trails. Their Comet chair has an easy to use 4-bike tray system and lightening fast upload speed, transporting you to the top in under 7 minutes. This facilitates some serious lap smashing potential!

The staff and trail crew are working hard to build a holistic mountain bike trail network, one that is fun for all abilities and categories of mountain biking. Their mantra, “Three Ways To Ride” is more than just a marketing slogan, it actually accurately represents the trails in their network and the ways users can have fun on the mountain. We spent some time at Silver Star in early July, and took full advantage of the uncharacteristically wet BC summer to ride Silver Star all three ways. 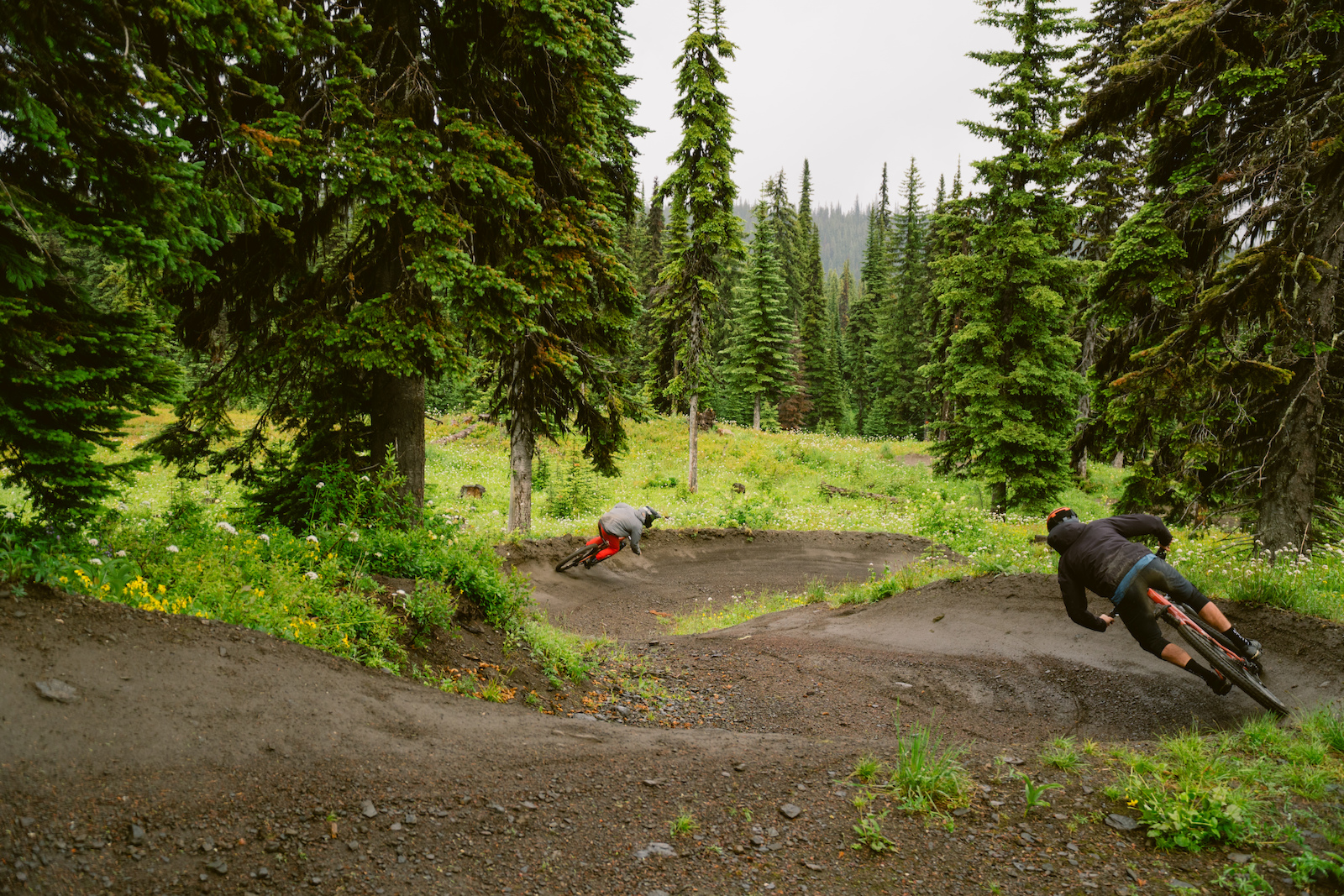 Silver Star is the definition of Hella Flow Bro. Mark and Will get lost in the berms on Pipedream. 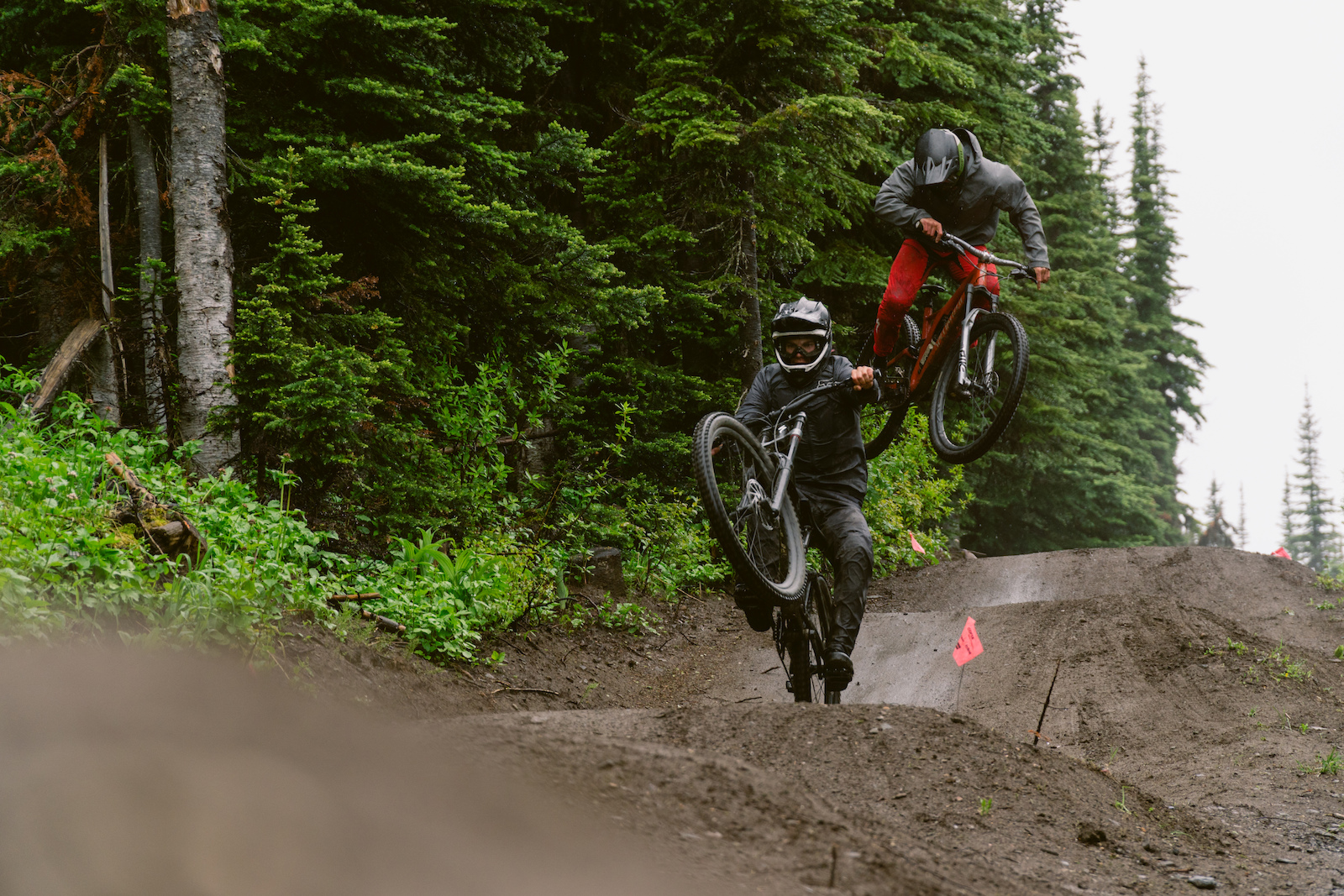 Downhill or trail bikes, both are a blast in the Silver Star bike park. Will preferred to ride his more nimble trail bike while blasting blue berm trails, while Kozman stuck with his DH rig. 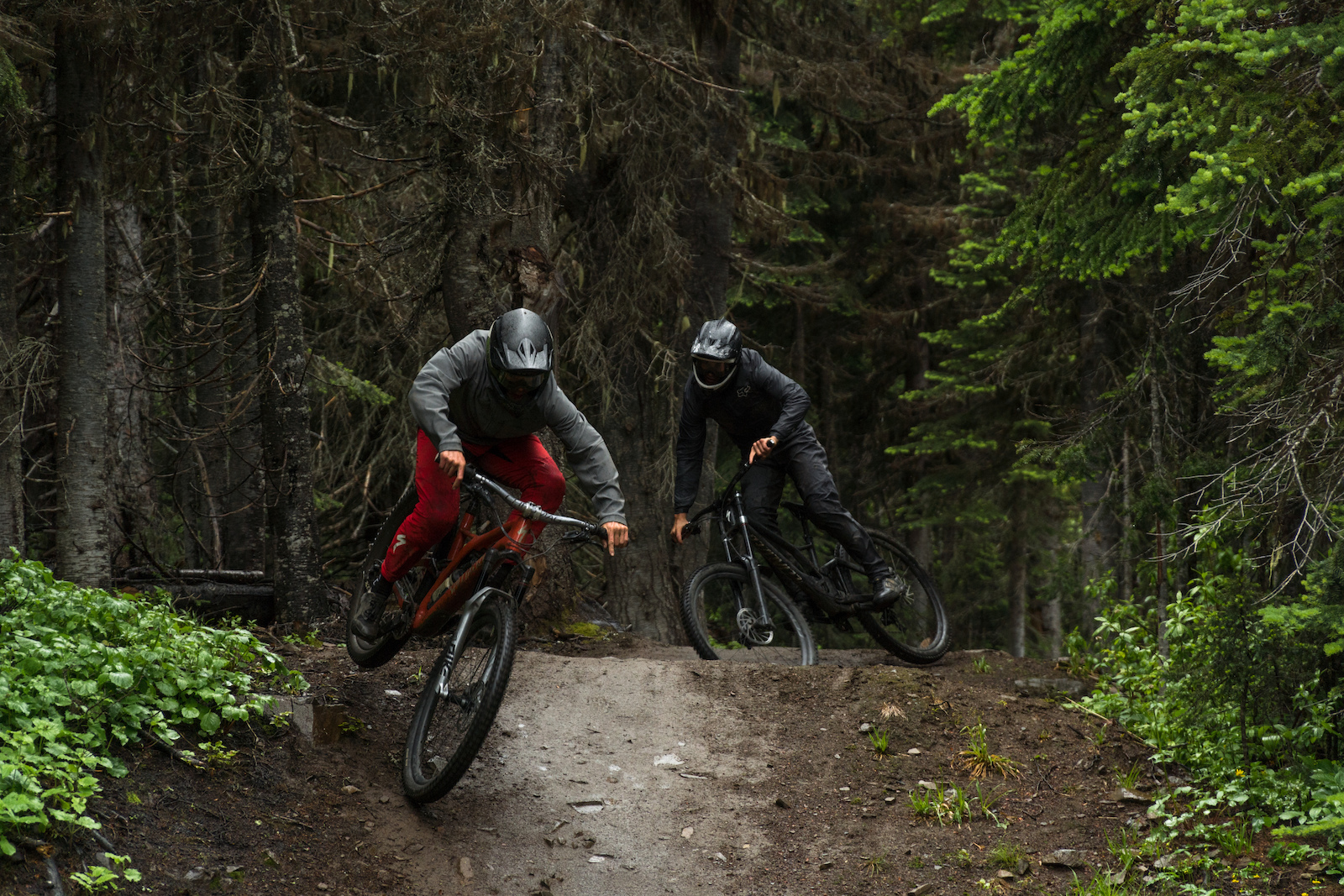 Paradise is a green trail with some seriously fun options for all riding abilities. Will and Kozman get sideways over a set of rollers. 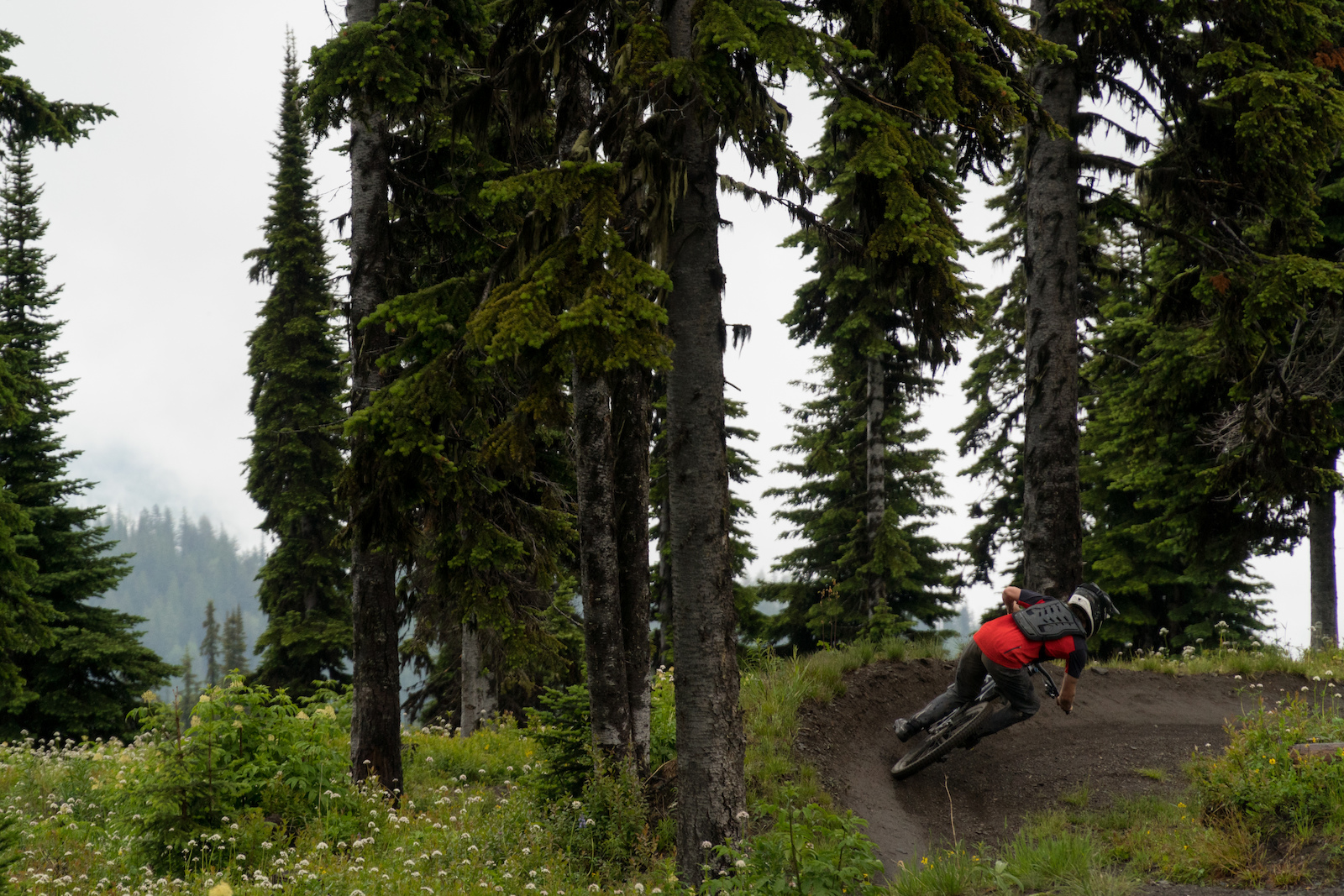 Shazam is a wicked fun blue flow trail, with the upper section winding its way through a sub-alpine meadow that is shared with Pipedream. Grom schralps a near perfect corner in prime conditions on Shazam. These conditions were bloody hard to beat! 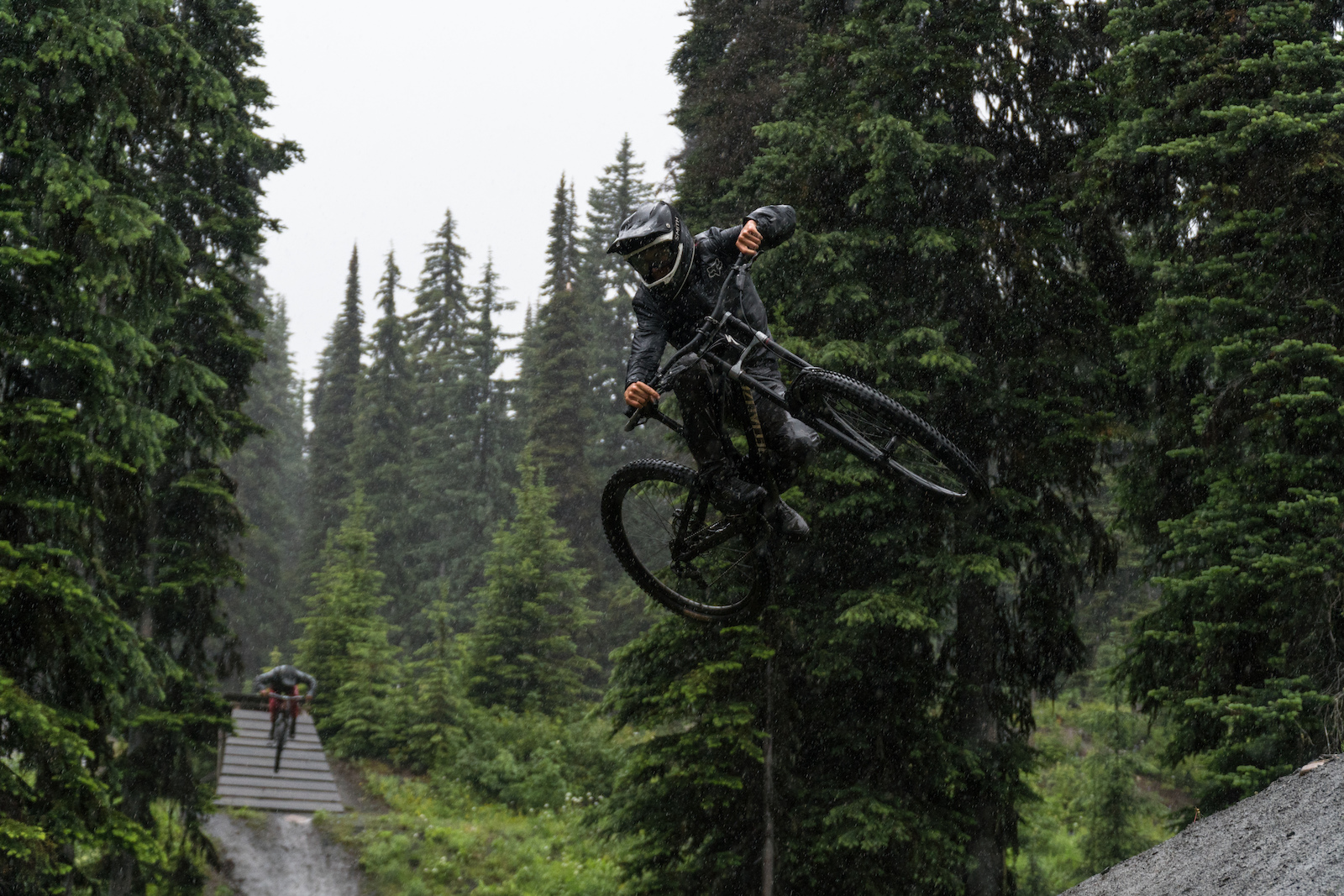 The intermittent rain showers kept the trails in near perfect conditions, but it also meant that sometimes you got wet. Kozman makes shapes in the rain while leading Will down Walk the Line. 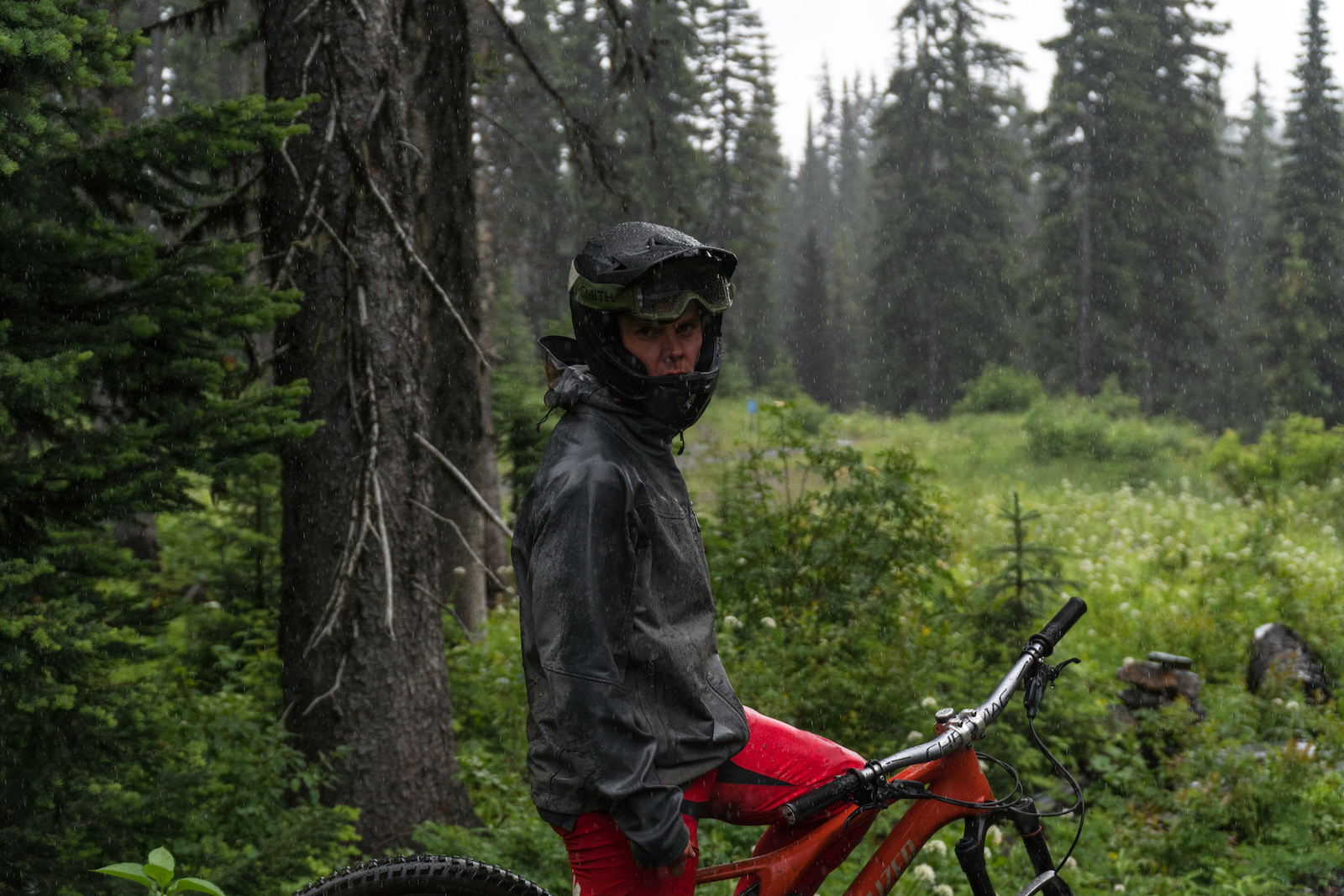 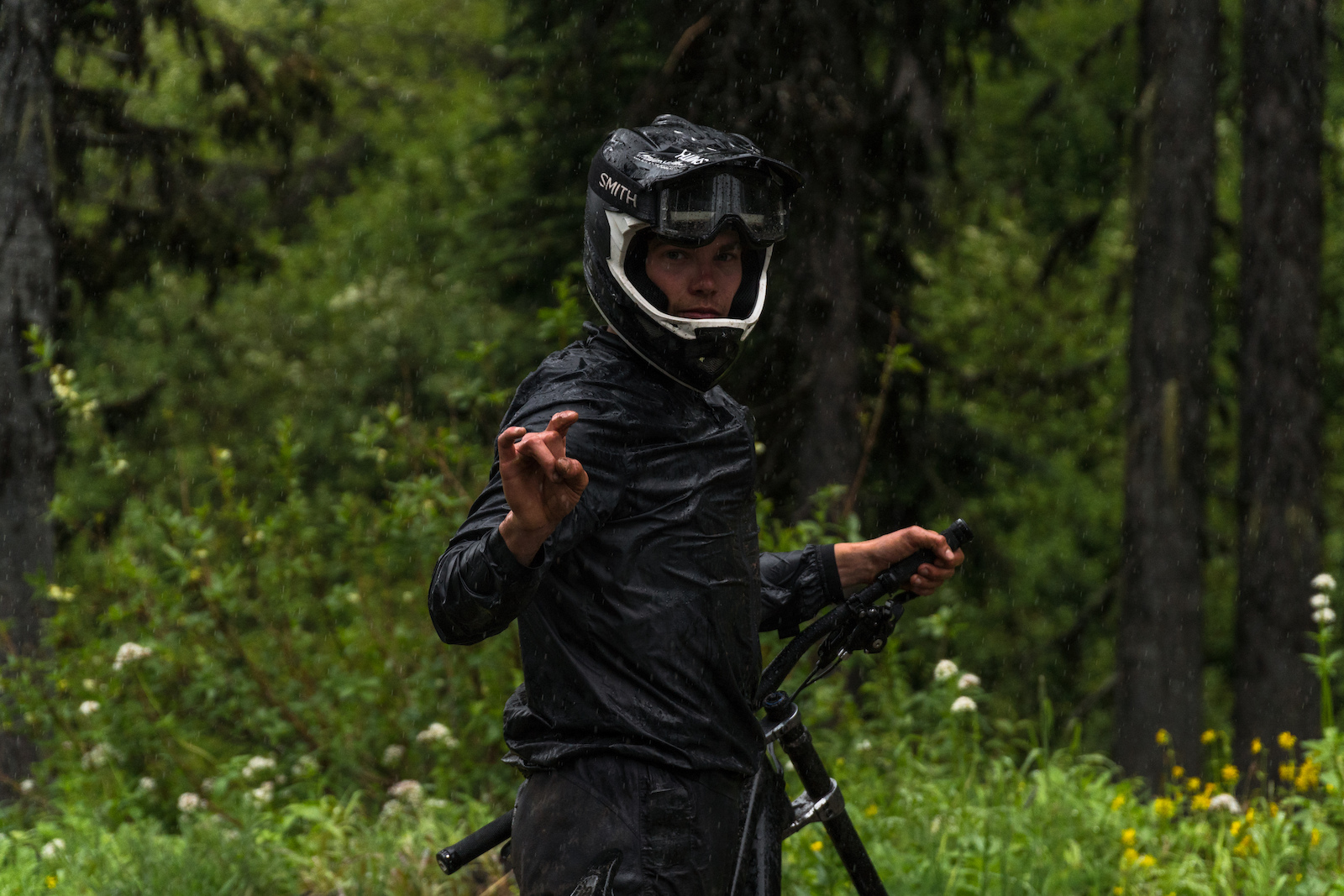 Sometimes you just need to suck it up and ride in the rain. 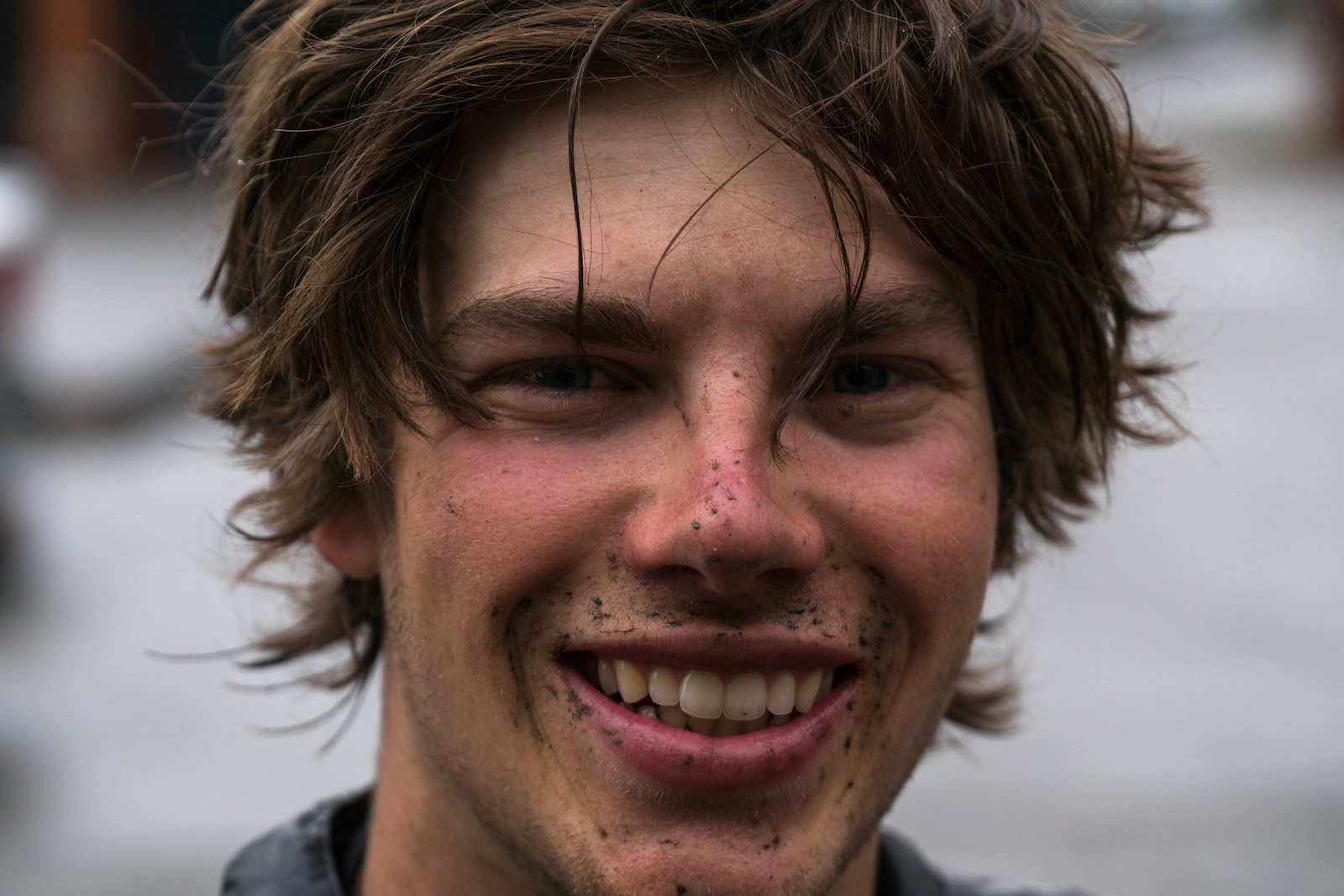 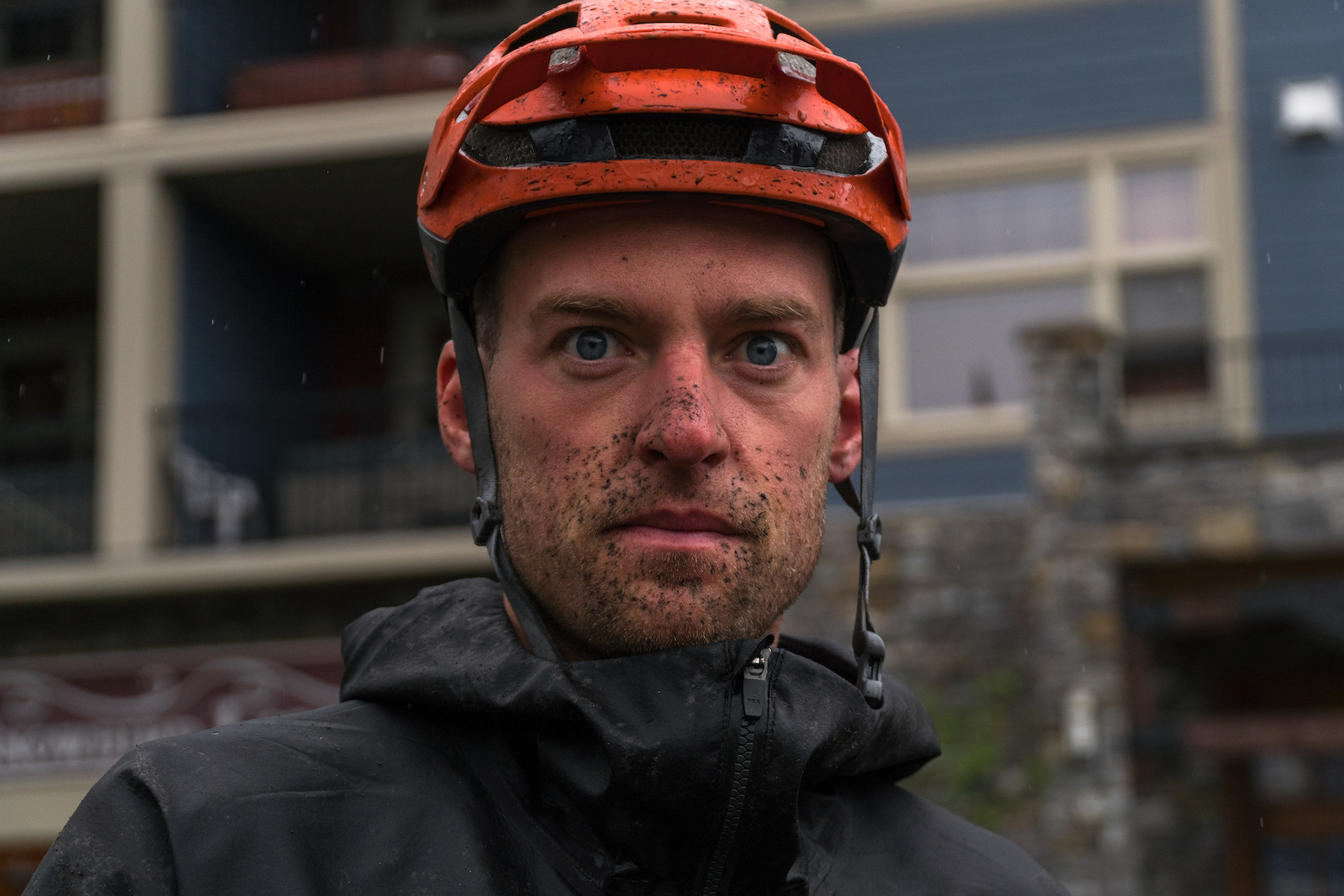 The dirt was GOOD at Silver Star. 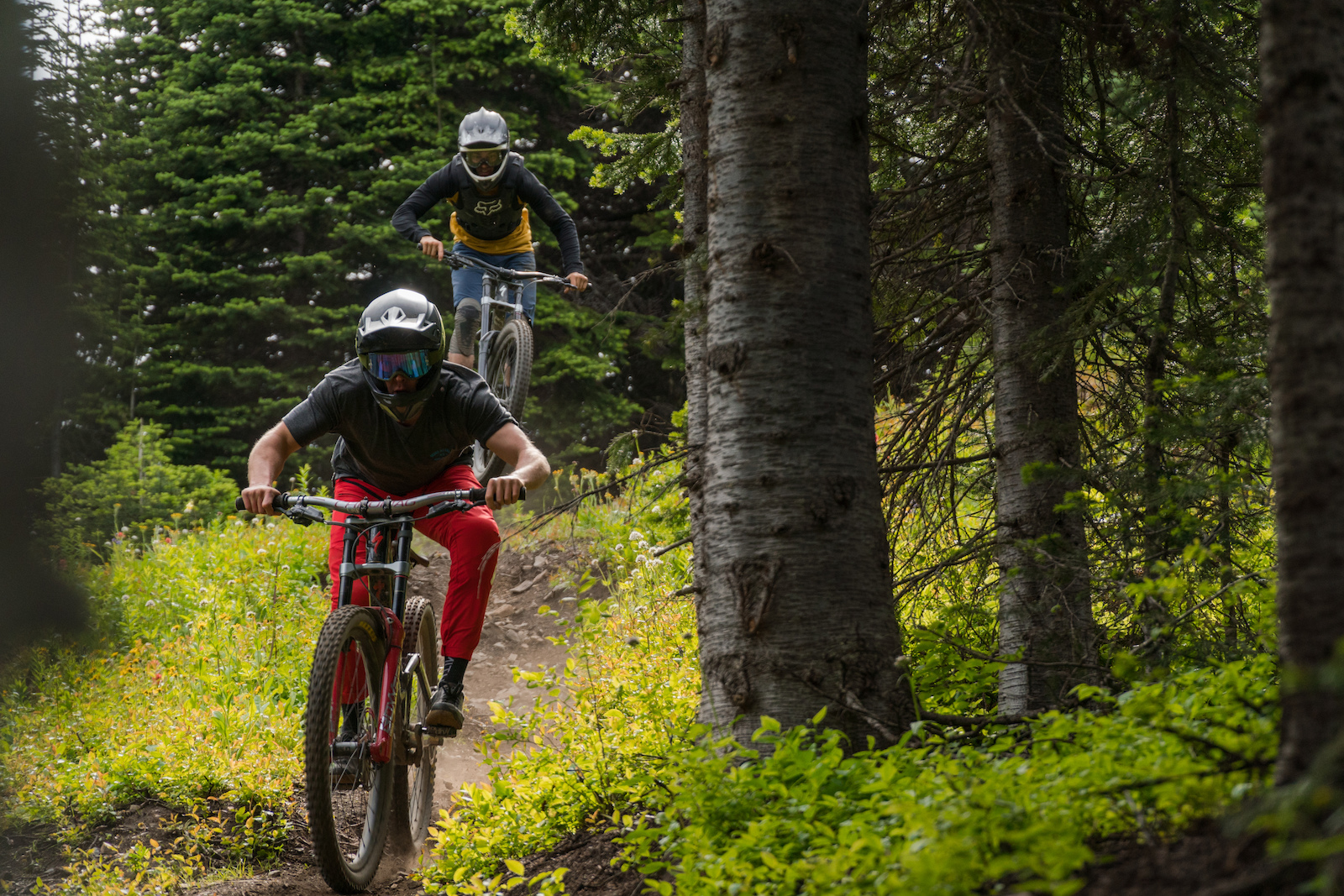 Chainsaw Mullet was quite easily our favourite trail in Silver Star. The wide, raw nature of the track left lots of lines open for interpretation, allowing you to play around with different choices from lap to lap. Will keeps it low and fast while Kozman boosts a little double on the upper section of trail. 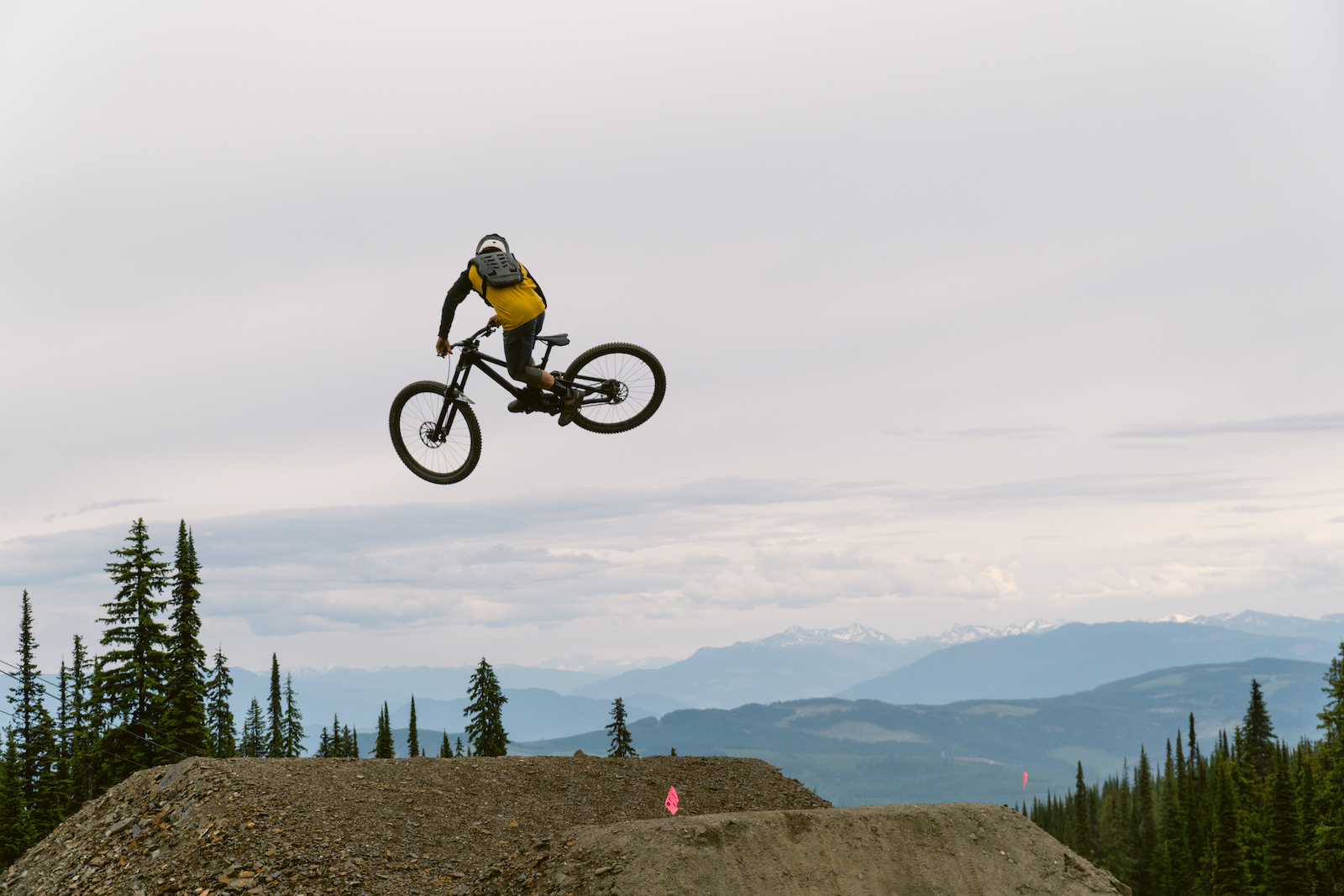 Walk the Line is Silver Star’s pro jump line that was originally built for Brett Rheeder’s opening video part in Beautiful Idiot. The jumps have been slightly toned down from their original gargantuan size, but they remain one of the gnarliest in the province. Kozman hangs it out on the 4th jump in the line. 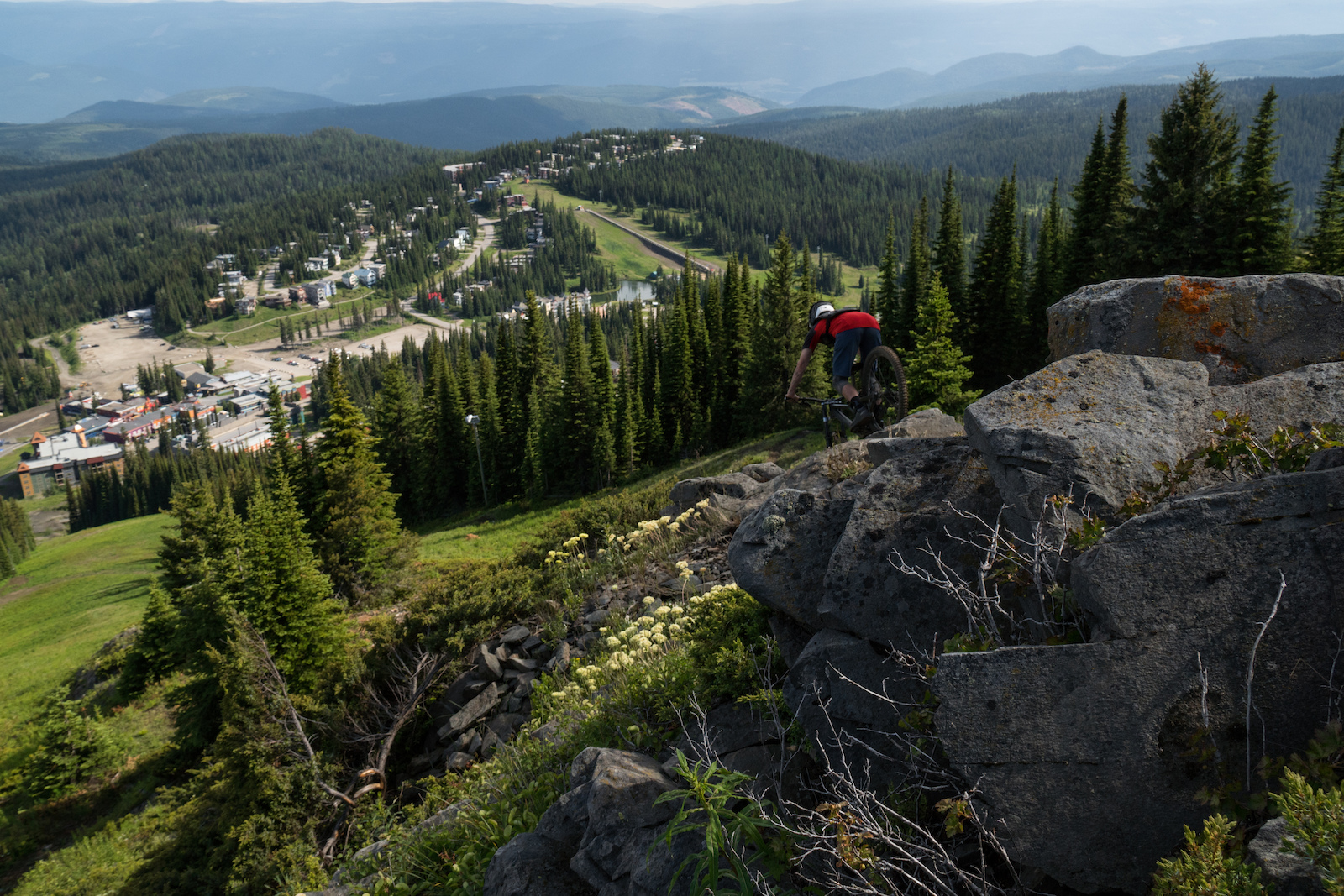 Kozman drops in on a bonus rock roll at the top of Downtown. Despite the high proportion of blue trails on the mountain, there are still plenty of trails or features that warrant a DH rig and will get your adrenaline pumping. 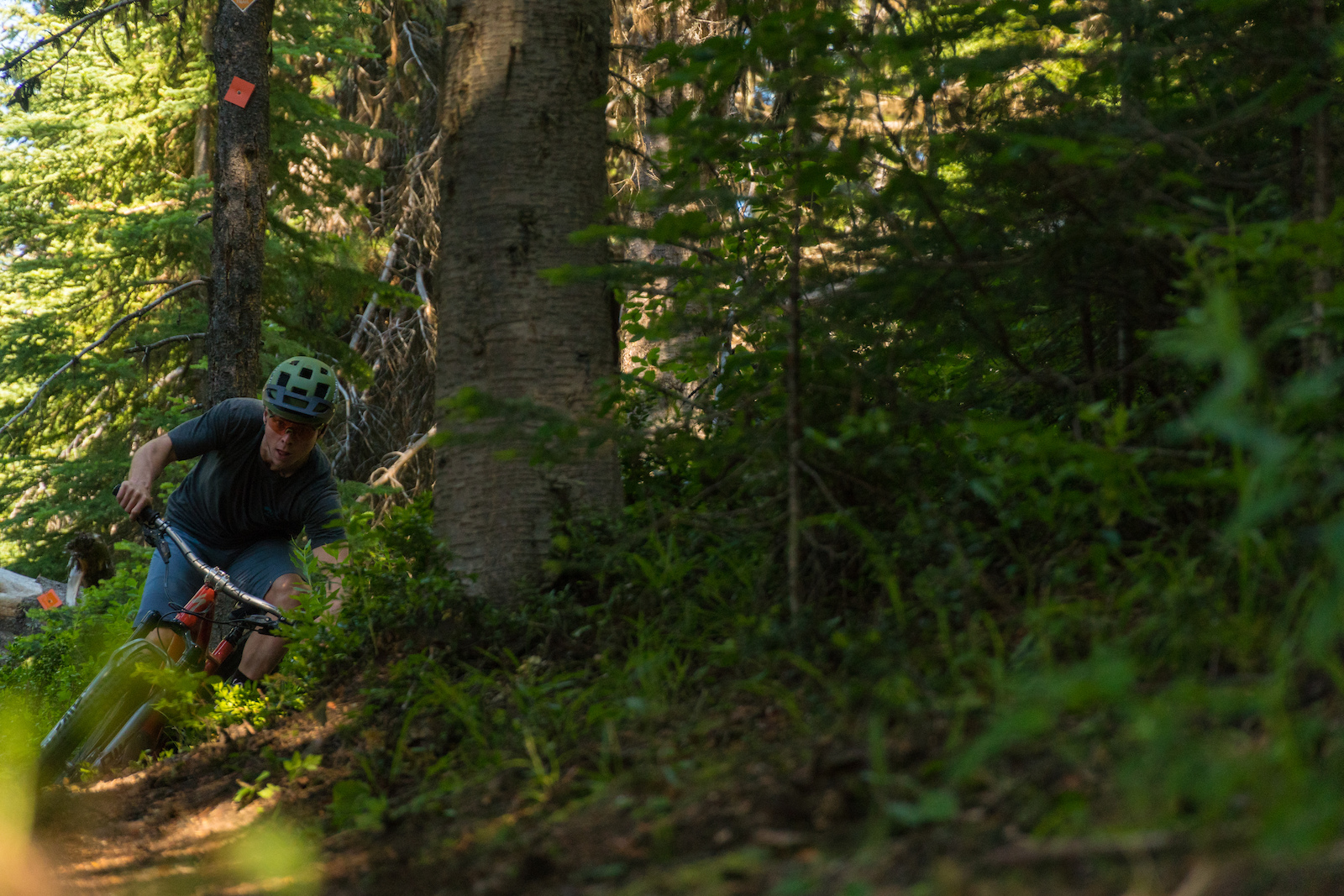 We spent our mornings pedaling the trails around the Silver Queen Chair, opposite the bike park, while we waited for the chairlift to open at 10. The climb was quick and the trails were easy to lap as many or as few times as you wanted. Will lays it over in a corner on upper Eric’s Trail. 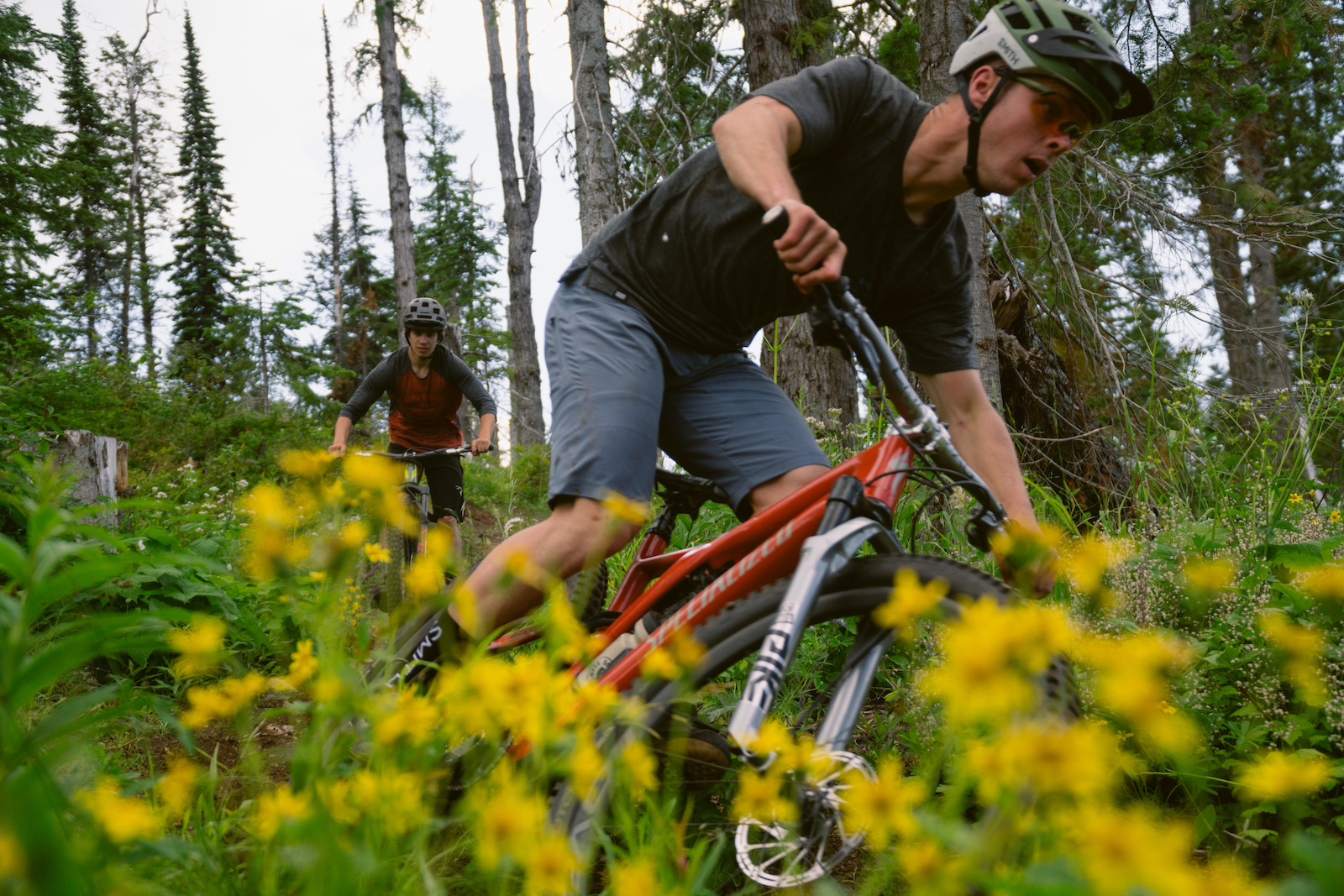 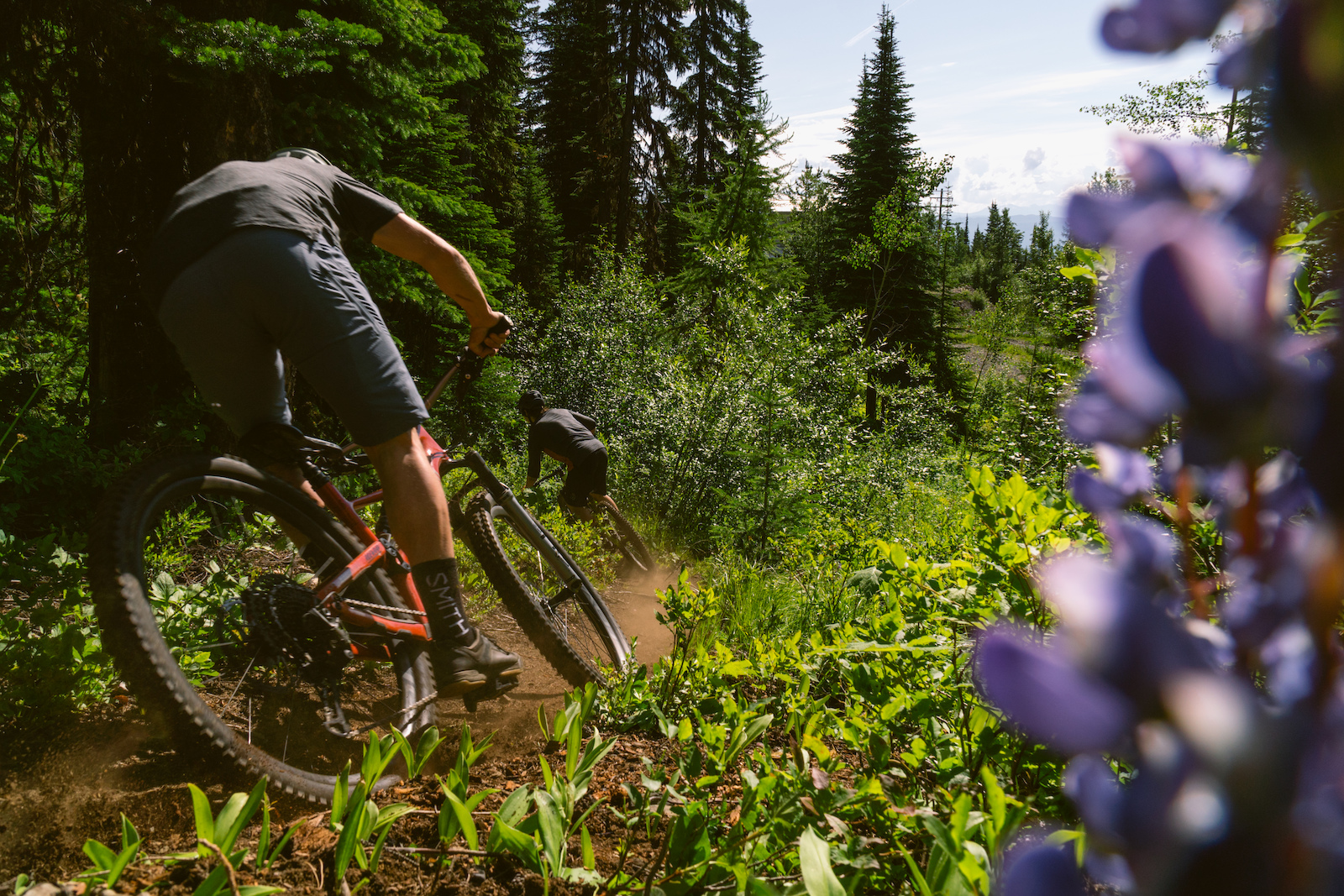 The wildflowers were starting to bloom in the meadows at Silver Star, which made for some pretty scenic morning rides. 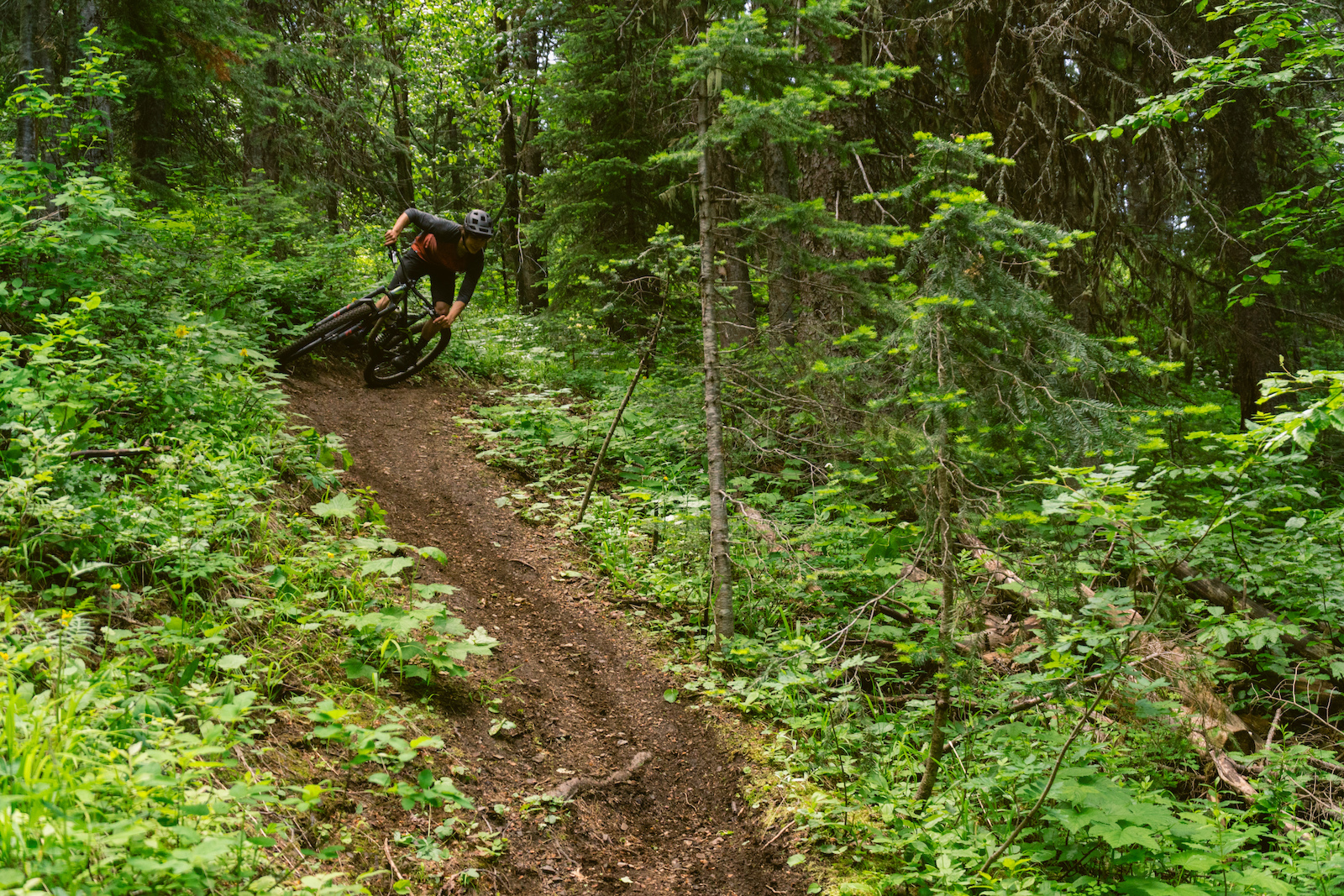 The lower section of Brian’s trail feels like a dirt rollercoaster. This highside berm was especially sweet! Kozman carves it for the camera. 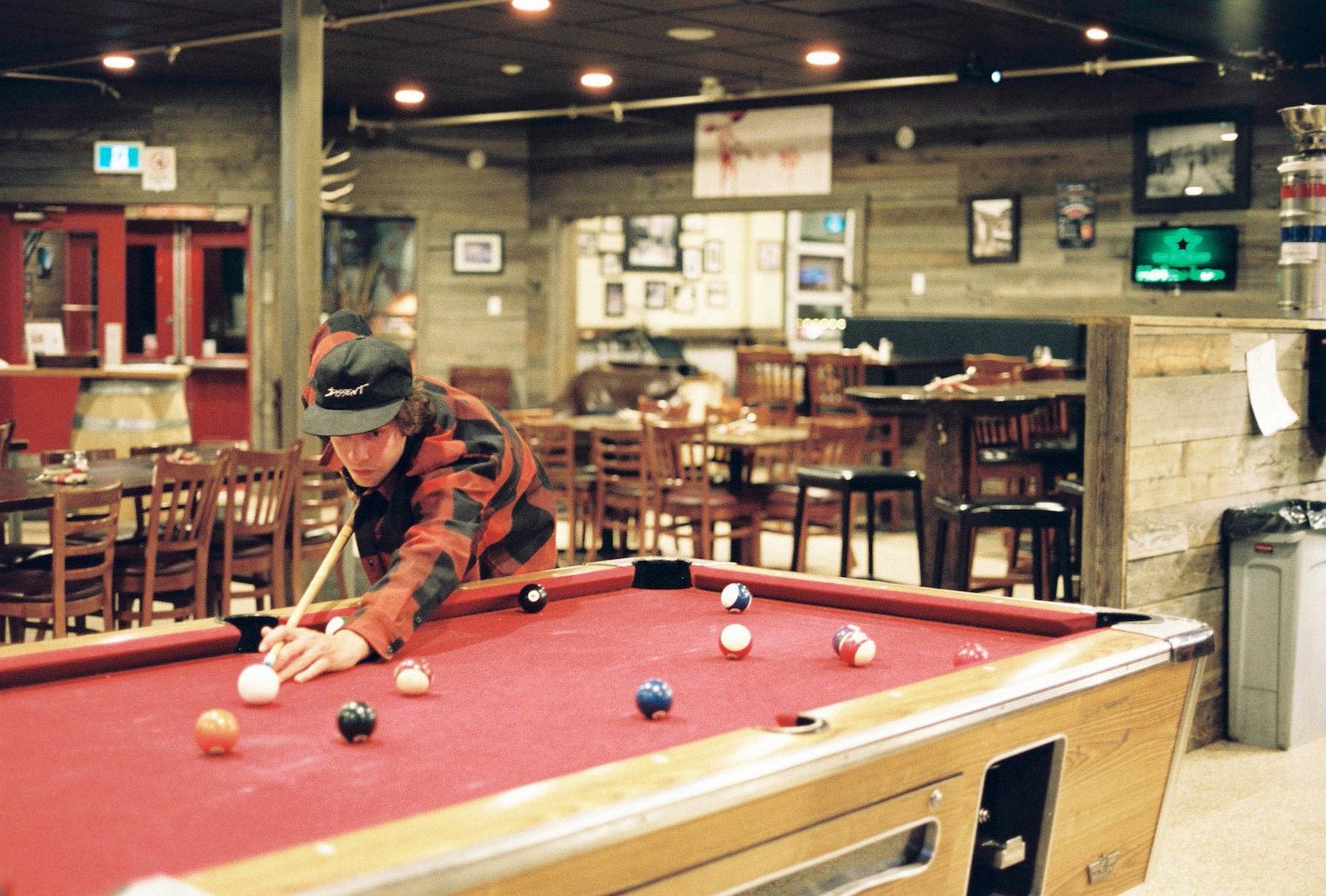 We closed down the Red Antler almost every night we were in Silverstar. The food was great, the beers were cold and tasty, with a good selection of BC Crafts, and the pool table provided hours of entertainment. 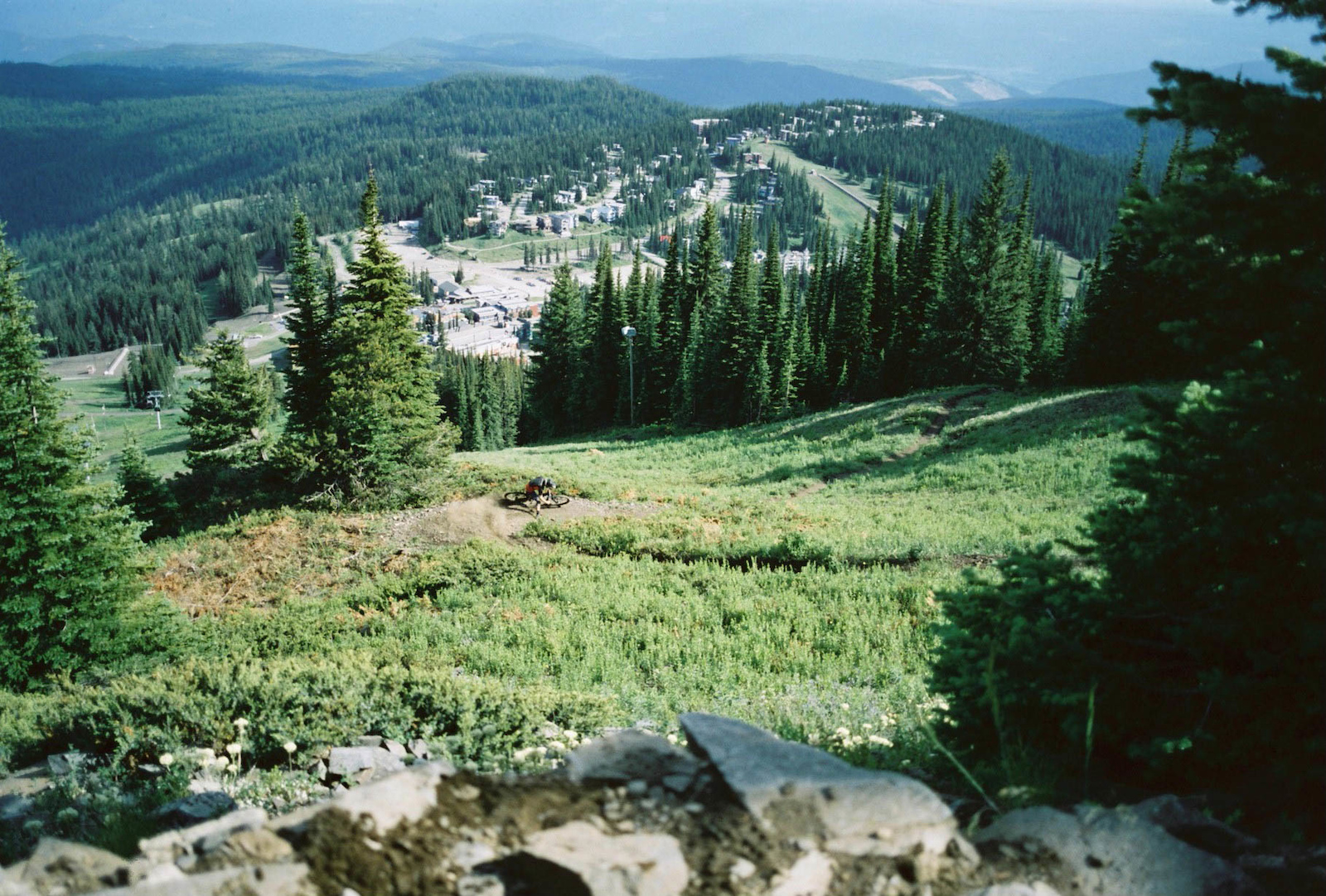 Kozman breaks loose in a dusty corner of Downtown with a view of Silver Star village in the background. 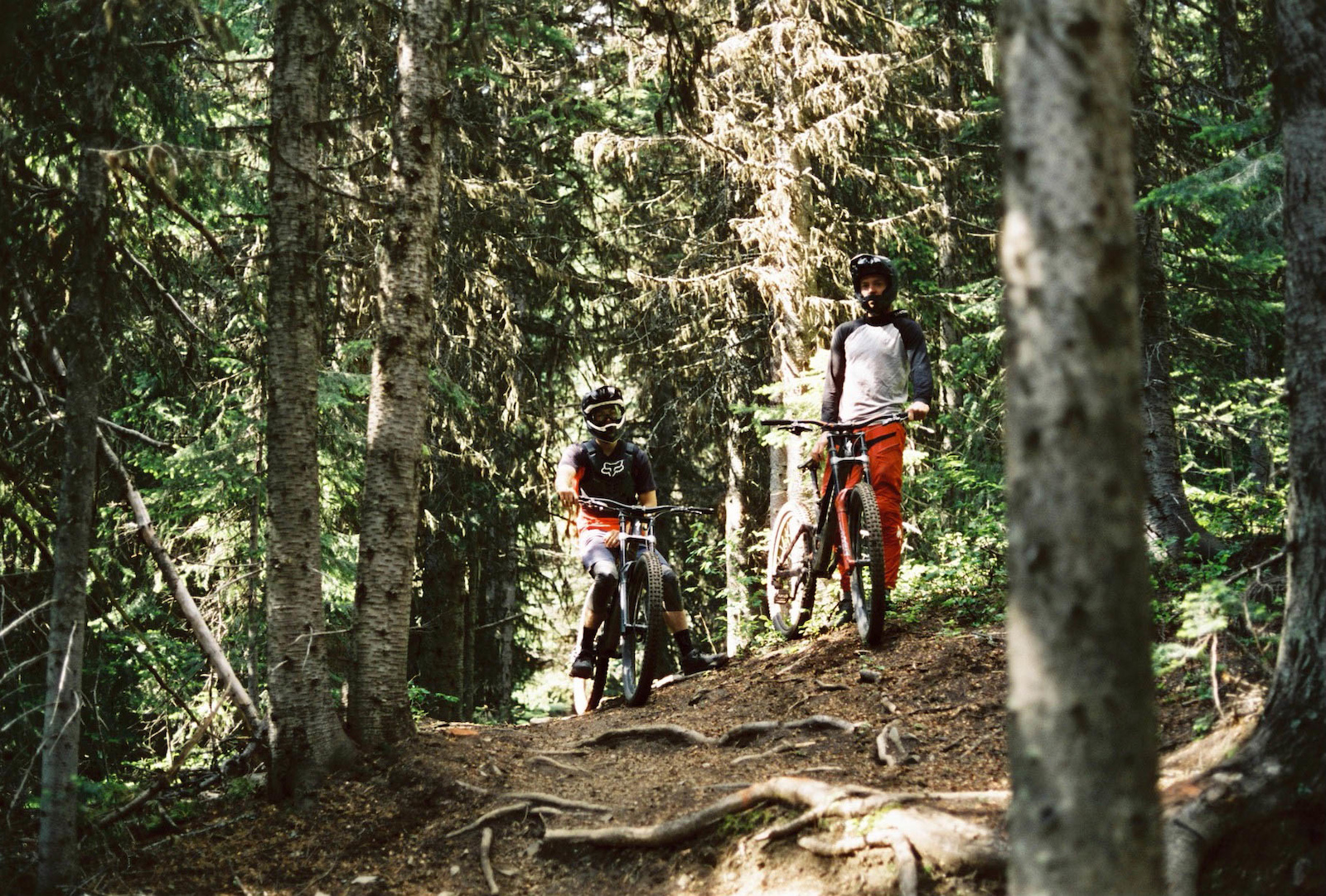 Sharky and Kozman debate lines on the lower section of Dag’s Downhill. Kozman got dropped like it’s hot. 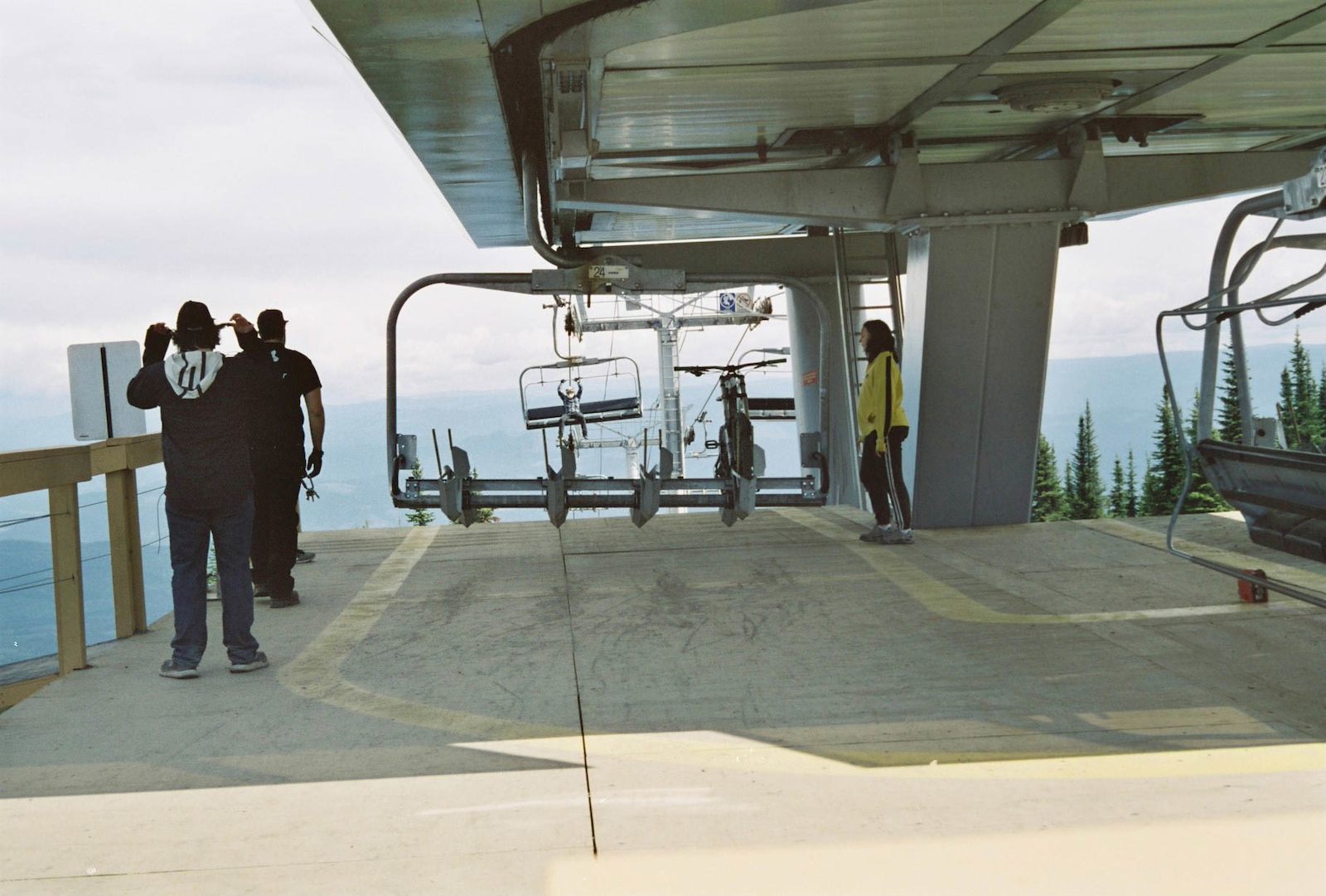 A lightning-fast six-seater chair and a 4-bike tray rack make getting to the top of the mountain at Silver Star pretty painless. The one downside, you only get 6 minutes and 40 seconds of rest between laps. 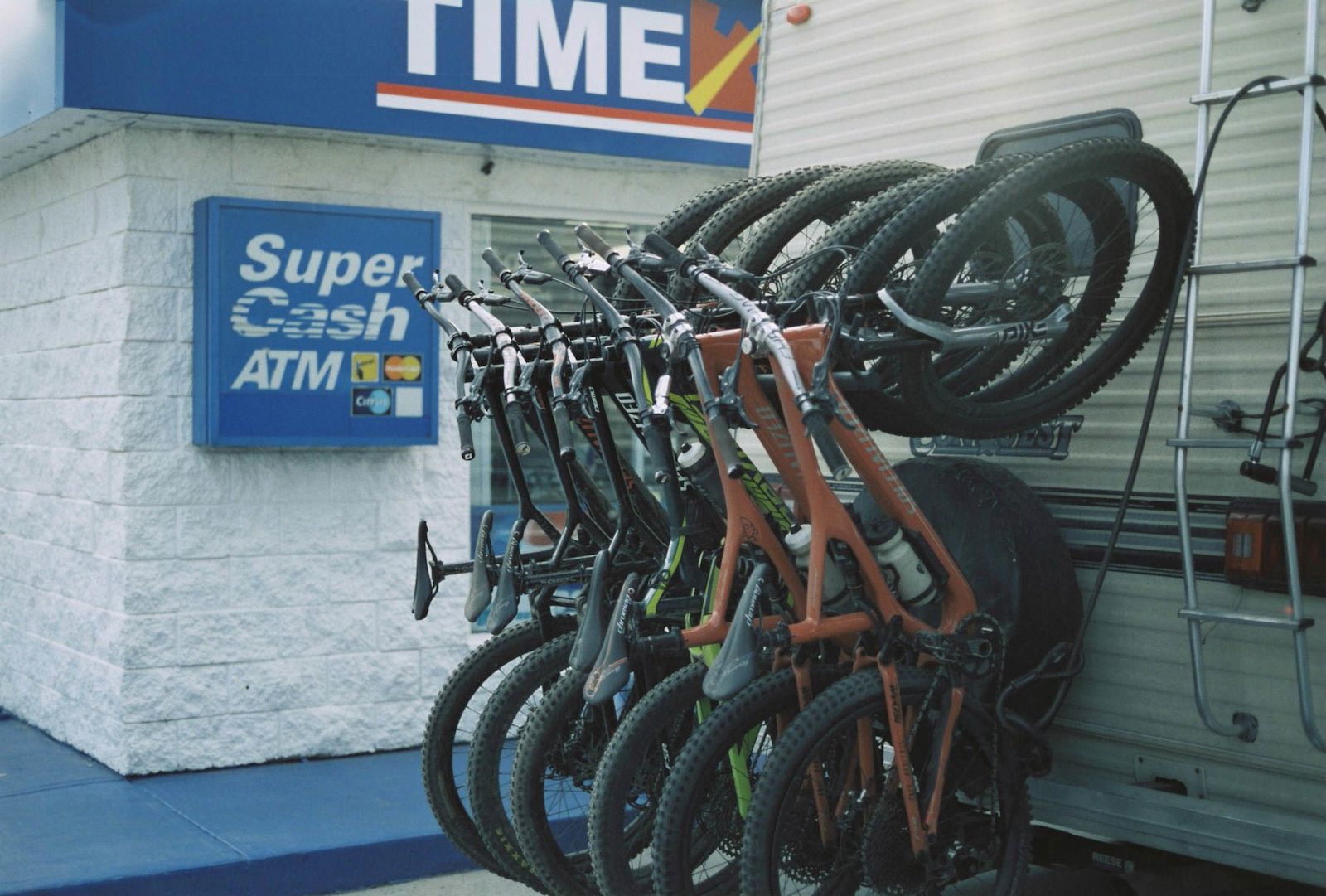 An RV and a bike rack full of bikes are the makings of a good road trip! We packed both our trail bikes and downhill rigs for our trip to Silver Star. If you don’t have two bikes, fret not, there is plenty of fun to be had on any bike; downhill, trail or XC.


In 2012 ,the death of Des Schumann, the former owner of both Big White and Silver Star Mountain Resorts, resulted in a restructuring of the areas into two separate businesses. The ensuing competition for resort supremacy in the Okanagan region has benefited both skiers and mountain bikers alike, as the resorts improve services, infrastructure and trails. The last few years have been great for Okanagan mountain bikers, and we would expect it will only keep getting better.

gbeaks33 (Aug 21, 2019 at 12:40)
A great way to enjoy silverstar if you like to Pedal is the enduro pass. Two lifts up and unlimited use of climbing to the top via silver shack. And add Beowulf onto that for a massive 30km backcountry loop.

Blackers (Aug 21, 2019 at 20:09)
Been riding there a few times this season, been hero dirt pretty much the whole time due to an unseasonably wet summer. Pretty hard to have a bad day when you're not having to climb the hill!

plyawn (Aug 22, 2019 at 18:44)
SS is a great example of a hill catering to their strengths - it's not a super-technical or steep mountain but their flow trails are only bested by Whistler. They don't have a massive trail network but focus on quality over quantity. I consider Sunpeaks another a good example of catering to the natural characteristics of the mountain as well; when you've got tech, push tech!

LexLewy (Aug 21, 2019 at 12:38)
Chainsaw is one of my favs, tie it in with Gnar and the lower World Cup is sweet. Downtown is another fav, pretty mentally taxing though.

Except when you live here. Just wait 24 hours, it will be sunny and tacky the next day. Lol

Laymo (Aug 21, 2019 at 12:52)
Incredible amount of trails, looks amazing. Good to know its DH bike friendly, too many parks are family friendly instead.

Thepureface (Sep 2, 2019 at 4:39)
Havent been for years but silver star is awesome. Especially the trail walk the line