Details Announced for The Merritt Crown 2020

This isn’t a fundraiser for Prince Harry and Meghan Markle’s new $10M Point Grey mansion. The Merritt Crown is a royal race of epic proportions and it’s back for another year. On September 26, in Merritt BC, we will be offering 3 options to participate in this volunteer-run race that raises money for the local trails: 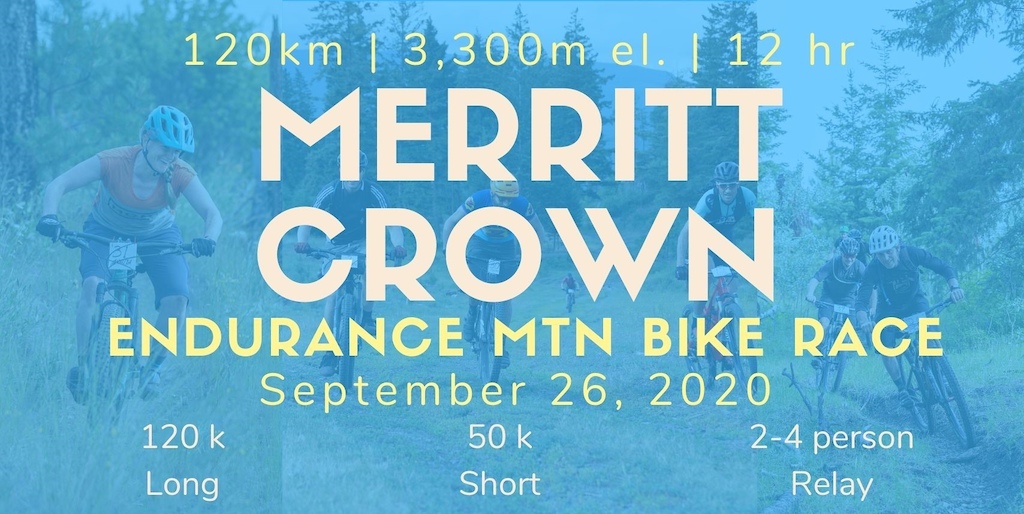 “For Canada’s 150th birthday, I wanted to create something that celebrated our country’s landscape and freedom.” Those are the words of Darch Oborne, creator of The Merritt Crown—the new epic singletrack mountain biking race in the Nicola Valley that opened to the public in 2019. The route links Merritt’s four distinct riding areas—Coutlee, Iron, Lundbom, and Swakum—making a shape similar to a crown. To date, less than 25 riders have completed the challenge: 120 kms of riding, over 3,300m of vertical, in less than 12 hours.


To ensure safety for our racers, volunteers, and the community of Merritt, we have postponed from our original date of June 20, 2020, to September 26th, 2020. While present circumstances have forced many events to be cancelled, we are fortunate to have the flexibility of low overhead. We are confident that we can run the event under current restrictions by staggering start times, doing temperature checks at registration, and providing volunteers with PPE. That said, we are watching the situation closely and will adjust as needed.

We hope that this extension in training time will take the pressure off any existing registrants who have been isolating during these uncertain times, and inspire others to set a training goal for the summer. Join the Merritt Crown Strava club to keep track of how you're doing, and post on the Facebook event page if you are looking for a relay team.

By opening up three options this year we are making the event more accessible for everyone. Bring your family for the relay, or sign up a group of friends. We encourage everyone with a bicycle to start training today and test yourself on the Crown this September. You could be dubbed the new King or Queen!
Register today to secure your chance at becoming mountain biking royalty. 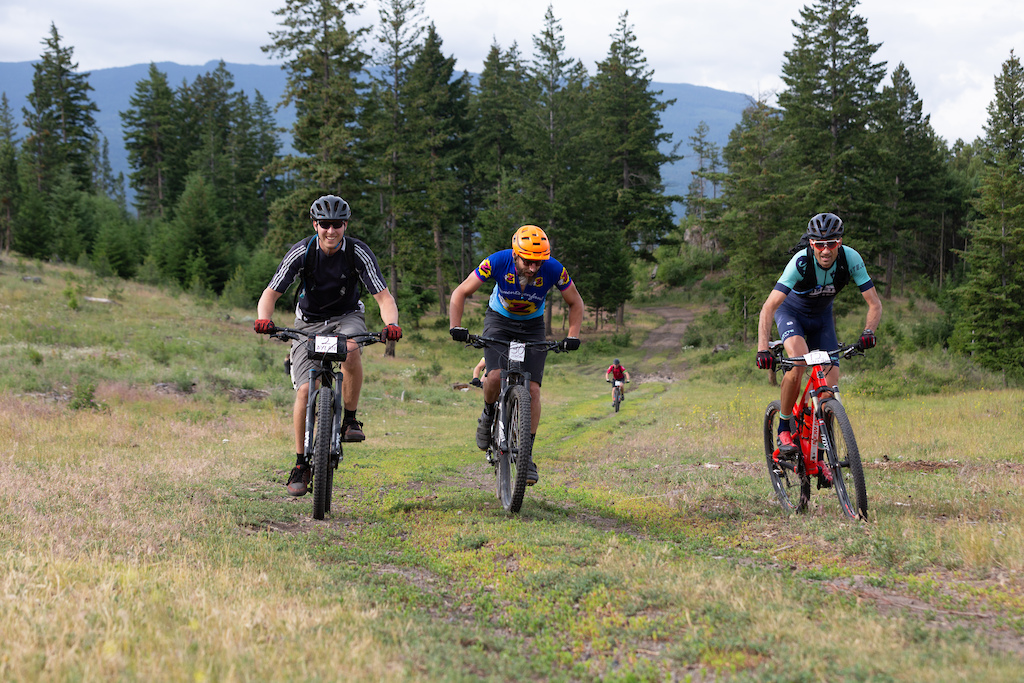 Dylan Schuetze, Adrian Bostock and Allan Prazsky, leading the pack up to the first summit.
Last year’s inaugural Merritt Crown saw 40 riders sign up for this epic challenge. Anne St. Clair of North Vancouver and Dave Cleveland of Penticton were the top woman and man in the race, earning their titles as Queen and King of the Crown. Cleveland set the new course record of 8 hours 50 minutes, finishing 13 minutes ahead of second-place finisher Greg Taylor of Coldstream, B.C. Vernon’s Dylan Schuetze followed in third, another 22 minutes later. Cleveland was awarded a cash prize and a free king room at Best Western Plus in Merritt to defend his title in 2020.

After the extended tour of Merritt’s four trail networks, Anne St. Clair was able to eek out a three-minute advantage over Amanda Racher of Salmon Arm, B.C. The two finished in 11 hours 39 minutes, and 11 hours 42 minutes respectively. Only 21 riders of the 40 who set out last year, made it back under the 12-hour time limit, earning a commemorative crown. 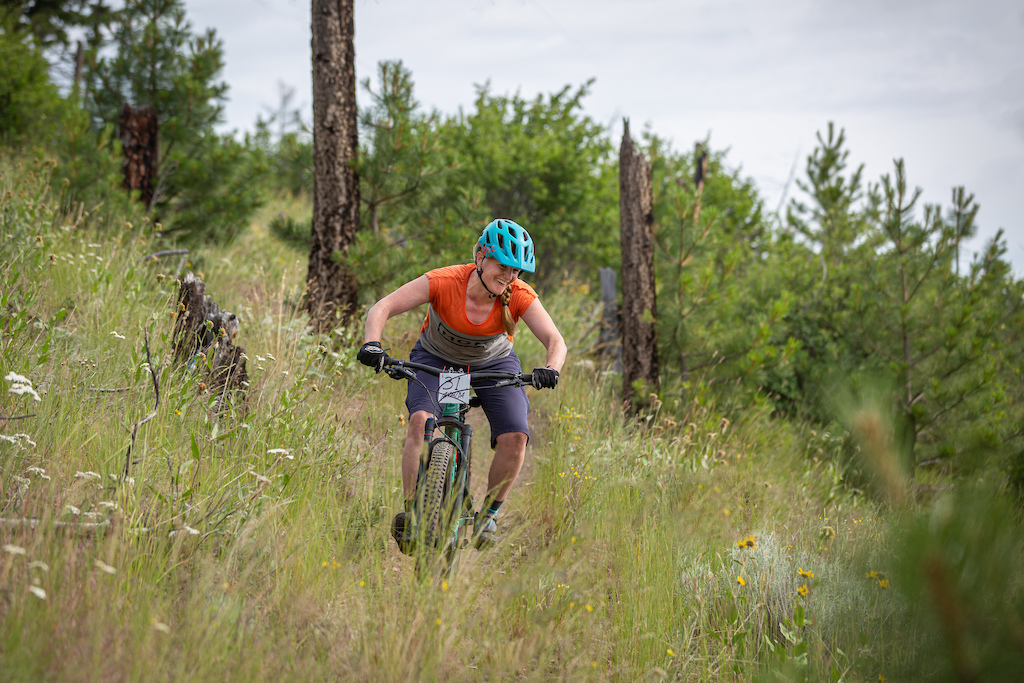 Amanda Racher will be back in 2020 to beat her best time.
This year, in addition to following all physical distance requirements, we will be making a couple of other changes to the race format. The race will have 3 aid stations along the course with water and snacks and helpful volunteers, in addition to a finish line celebration station with a flowing keg. We are improving signage at confusing intersections but nevertheless continue to require that all riders carry a GPS device with the map pre-loaded for navigation. 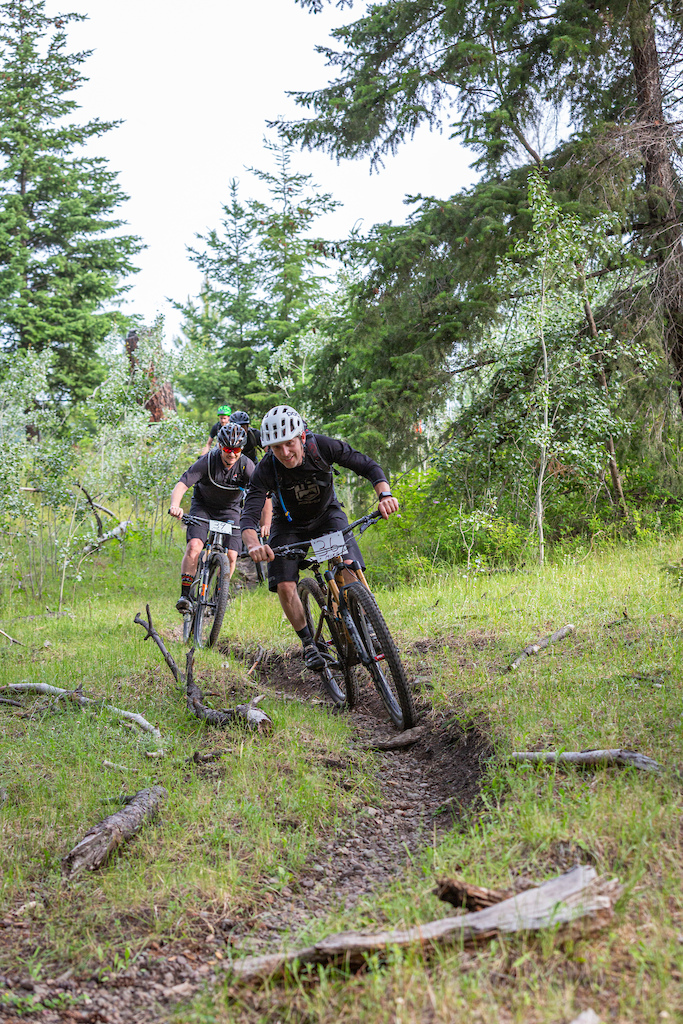 Mike Watton leads a group of riders into JP Cool.
The finish line will be at the campsite this year so all riders receive a royal welcome. Sunday will feature group shuttle rides on Merritt's legendary downhill trails and opportunities to relax at the riverside campsite. After making a donation of $500 to the Merritt Mountain Bike Association with last year's proceeds, this year's goal is to raise $1,000 to be put towards the Rails to Trail project. 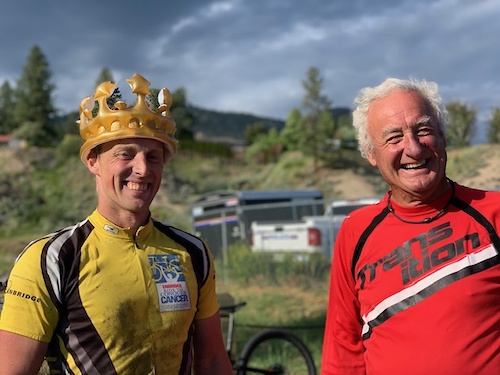 Mountain bike royalty: Merritt local, Andrew Nielsen (L) and Darch Oborne (R).
Without ever mountain biking before his late fifties, Darch Oborne has become an active member of the mountain biking community in both Arizona and British Columbia. In 2018, at the age of 73, Oborne completed the 1000 km-long BC Epic 1000 in six days. He has built over 15 trails, conducted riding and trail building courses, and is now championing Merritt’s first endurance race.

Last year Oborne won Gold at the BC Seniors Summer Games in the mountain biking long course. Darch has just been advised that the Canada Summer Senior Games that were slated for 2020 have been postponed until 2022- too far in advance to plan for any senior. That's why we’re doing what we can to keep the Crown happening this year. Darch taunts, “Don’t be lacin’ while others are racing!” Register today to secure your spot.

Tweet
Must Read This Week
Interview: Trek's Travis Brown On Experimenting With 32" & 36" Wheels
85737 views
First Ride: Cannondale's All-New Scalpel SE
72263 views
Ridden & Rated: 4 of the Best eMTB Motor Systems for 2020 - Bosch vs Brose vs Shimano vs Fazua
60940 views
Pinkbike Poll: If You Had to Ride One Bike for the Rest of Your Life, What Would It Be?
53340 views
Video: Conflict Arises Between 17 Year Old UK Rider & Apparent "Trail Saboteurs"
52170 views
First Look: ShockTune is a Free Suspension Setup App
46452 views
Video: Claudio Caluori Tries to Keep up With Nino Schurter on his Home Trails
45332 views
Bike Check: Ben Cathro's Santa Cruz V10
35509 views

darchoborne (May 10, 2020 at 8:01)
'Don't be lacin.......
I've just ridden the Merritt to Lum Bom section with guru builder Pete Sleik and we think we have a sweet new route to keep us off the 97C Connector (4 lanes) and through lovely uplands country; saw 2 bears and 3 deer while ridin it.
And you'll be able to give us your Lance Armstrong 'tea' at the start so we'll have tit for you at the 3 stations.