Join Pinkbike  Login
After a long, sun burnt day, i sat down in the circa 1980, but still very comfortable couch, to let Denny's mushroom swiss burger settle in, and to talk about the long, but first day in the sun shine. Las Vegas has lots of lights, lots of girls, guys, pimps, playas, bro's and friends, but for 1 week out of every year most of the main bike manufacturing companies in the world meet together under one roof to talk about there up coming products.
2008 IronHorse Sunday 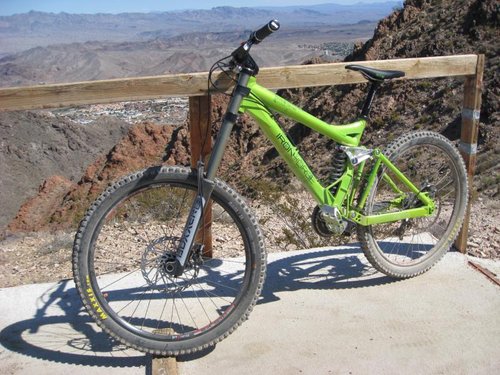 Seeing as this was my first year attending the "Viva la Vegas" lifestyle most people call "Interbike" I had a lot of people I wanted to talk to. I met up with Todd at Iron Horse after applying a rather large sun burn to the back side of my neck. I chatted with him for a bit, discussing the changes to the new Sunday, and how it effected the riding side of the bike. I never did get a chance to ride the 07 Sunday, so I would not know how the bike felt back then, but judging by the overall feel of the bike at a stand still, it felt rather good.

After about 20 minutes of talking with Todd, i was introduced to Interbike food. This consisted of a "double cheese burger" that looked like the patty had been boiled, but hey, its food, and i ate it. Turns out, i got the last one they had prepared, so Mike had to wait in line for a good 10 minutes to get his, but the gentlemen me and Tyler are, we waited for him. Once lunch had been completed, we parted our ways, and I went back to the Iron Horse booth. After being re introduced to Todd, I got the chance to ride one of these Sundays. The guys at Iron Horse were hella stoked to get me out on one of these 2008 Sundays, and that is to be understood. They had a nice shuttle system running up the famous "Bootleg Canyon" were everyone was test riding the bikes they had borrowed. Incredibly, we packed about 25-30 people into a huge Budget rentals truck. Once the top was reached, I was released into the wilderness (aka the wasteland of Bootleg Canyon).

I do have to say first off the trail conditions I was riding in were not my first choice. Bootleg Canyon throws some nasty stuff around, and I was one of them, but I made it to the bottom. Where you drop into the trail, it's a wide open peak that you stand on, then roll in. Well, a large gust of wind definitely alters the feeling in your stomach before you drop in. But, at any rate, I dropped in, and was pleasantly surprised by the performance of the Sunday. I can definitely see why the DW-Link is so famous now. One really noticeable thing was the fact that the front and back end sag the same under even weight. Its an odd feeling to have the front end dive under a compression as well, but it was easily adapted to the conditions. Another big thing i liked about the Sunday was its pedal efficiency. I would like to say about 85% of my power was put to the wheel, which i think is amazing for such a long travel bike.

All in all, the Sunday was an amazing bike. Responded well under pressure, felt great at high speeds, and looked sick. 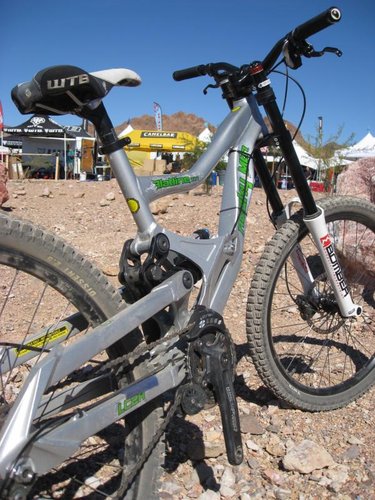 Rocky Mountain's all new Flatline bike has a bunch of cool things going on. For starters, the idea behind the FORM link, the rider can choose between 3 preset choices for shock mounting. What this means to the user is they can alter the feeling of the geometry the bike rides at. With a shift of your upper shock pin, into either of the 3 pre drilled holes, you can easily change it out. Also, instead of using a thrustlink, the Flatline is using a Tuglink, which makes the suspension more supple to small bumps. A really cool feature of this frame in my eyes would have to be the built in "mud guard". Rocky Mountain created a flared section to the down tube of the bike, to guard any mud or muck from flying up in your grill.

All in all the Flatline looks like a awesome bike, and completely capable of handling anything you can throw at it. 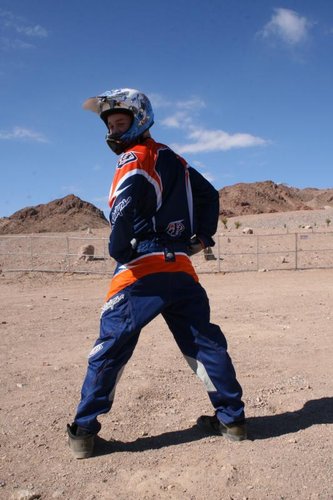 Also today, in the massacre that I call "my first day at Interbike" I got a chance to calm down, and talk some tech talk with the boys over at Troy Lee Desings. Derek and Mike over at the booth were showing some of the new 2008 gear to us guys over at Pinkbike. There's nothing that gets Mike, Jordan, and Tyler more googley eyed then some hot looking gear for the new season, and Troy Lee Desings definately cut us deep on this one. With the introduction of a completely new helmet called the "Chito" Troy Lee Designs is shooting for the stars this year. The graphic artwork to my surprise was out sourced to a friend of a friend of one of the employee's over at Troy Lee. Check this out:


The all new XC Red Plaid shorts were a huge hit around the hot desert of Las Vegas. Equiped with a built in chamois, and protective hip guards, these shorts were very comfortable, and flashy too.


Also, they released a new XC jersey that is comfortably equiped with mesh back vents, "reflective" striping, and a 3/4 length zipper.


And to finish it off, the new GP racing suit. note: Sam Hill, Nathan Rennie, The Cove team, and a lot of other pinners have been racing in this gear for a while. Easily the most popular kit I have seen all year. Now YOU can be as fast as them, orrr just look as good. Check it:


Well, this is Jordan, aka Dolla Bill, saying to get out there and kill it on your 2 wheeler. Whether you're skidding your sister's bike, or huckin' your Dads, bikes are bikes. Over and Out folks, stay classy.


Posted In:
Reviews and Tech Reviews