Donate $5 to Santa Cruz Trails & You Could Win an Ibis 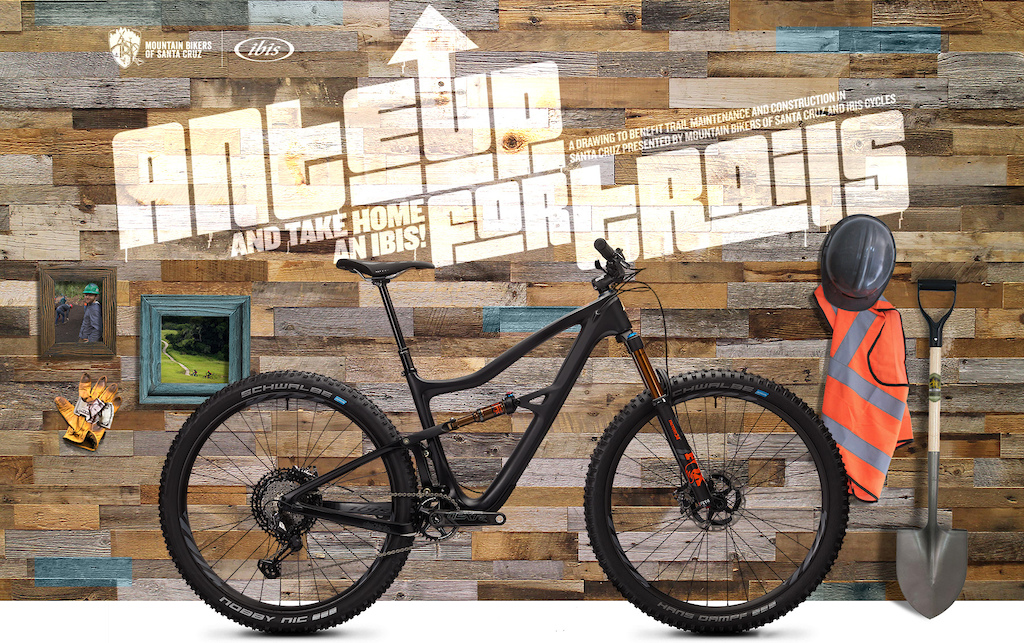 One lucky donor will ride away with a new Ibis bicycle in the Mountain Bikers of Santa Cruz’s (MBOSC) “Ante Up for Trails” campaign. Donors receive one entry for every $5 donated to MBOSC between now and June 25 when a winner will be chosen. The winner then gets to pick the production Ibis bicycle of their choice as the prize, which is a value of up to $10,000! MBOSC has set a goal of raising $75,000 with this campaign. Enter now at: www.mbosc.org/anteup

“There’s a big difference between talking and doing”, said Ibis president, Tom Morgan. “We’re proud to support MBOSC because of what they’re doing!" 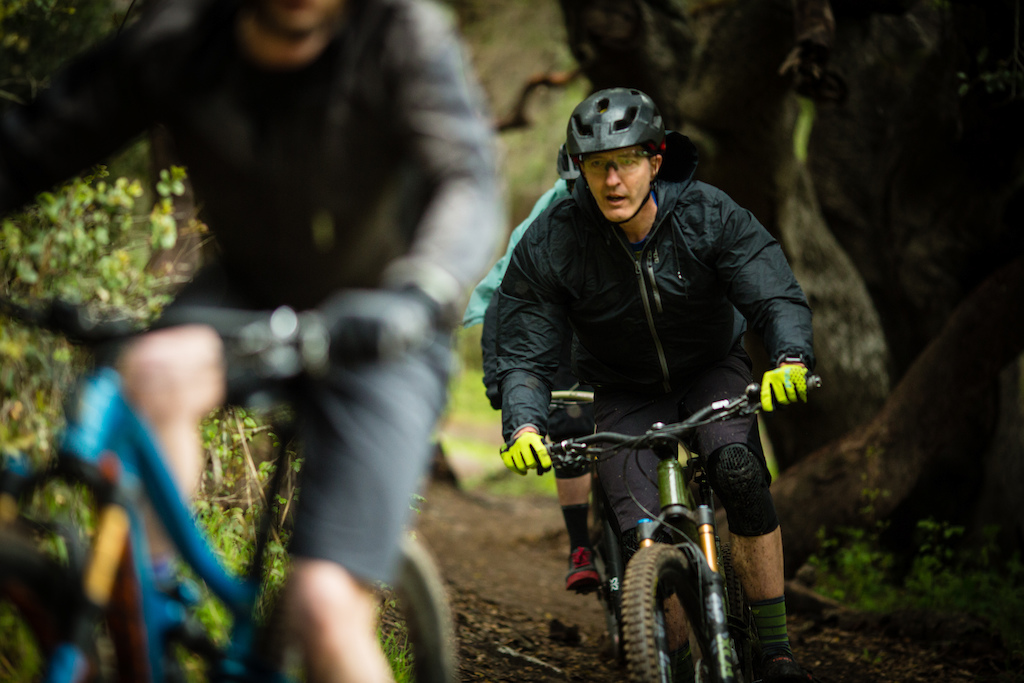 Tom Morgan, Ibis president, supports MBOSC because they do what they say they're going to do: build new trails! (Photo: Saris Mercanti)
Tom added, "Each year our campaigns with MBOSC have tangible results, and by that I mean new, legal, and sustainable trails in Santa Cruz County. Just this last month they opened 5,500 feet of new singletrack in Wilder Ranch State Park, which MBOSC partnered with the State Parks system to design and build. Everyone at Ibis is stoked to help make projects like this happen.” 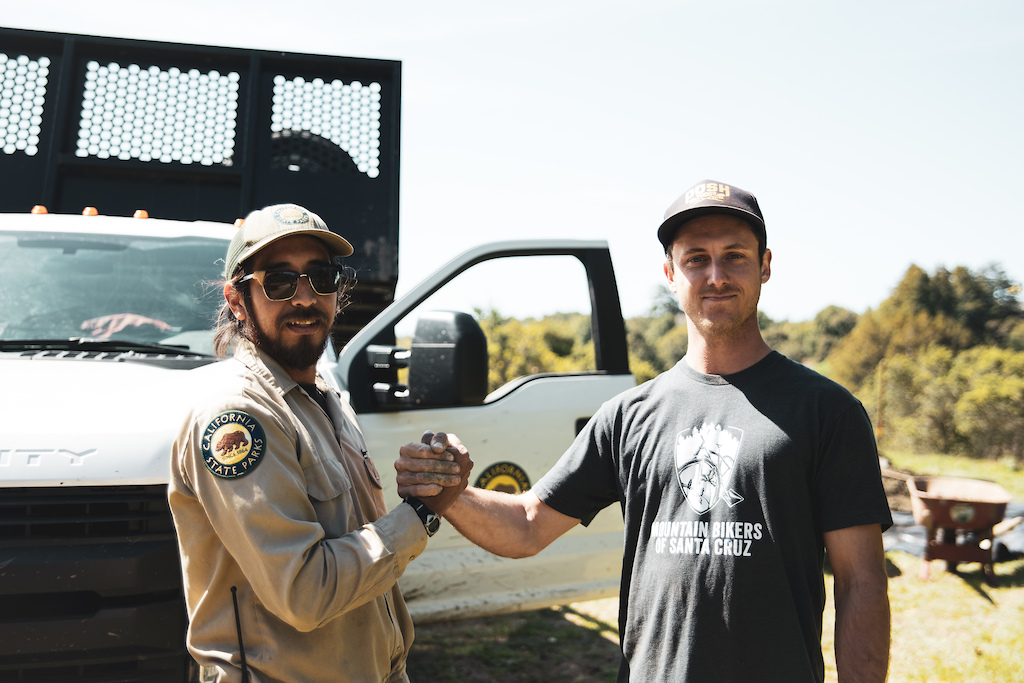 West Engelsman Reroute: MBOSC partnered with State Parks on the design and construction 5,500 feet of new sustainable singletrack to replace a badly eroded fireroad in Wilder Ranch State Park. This rerouted trail opened on Friday, May 24. 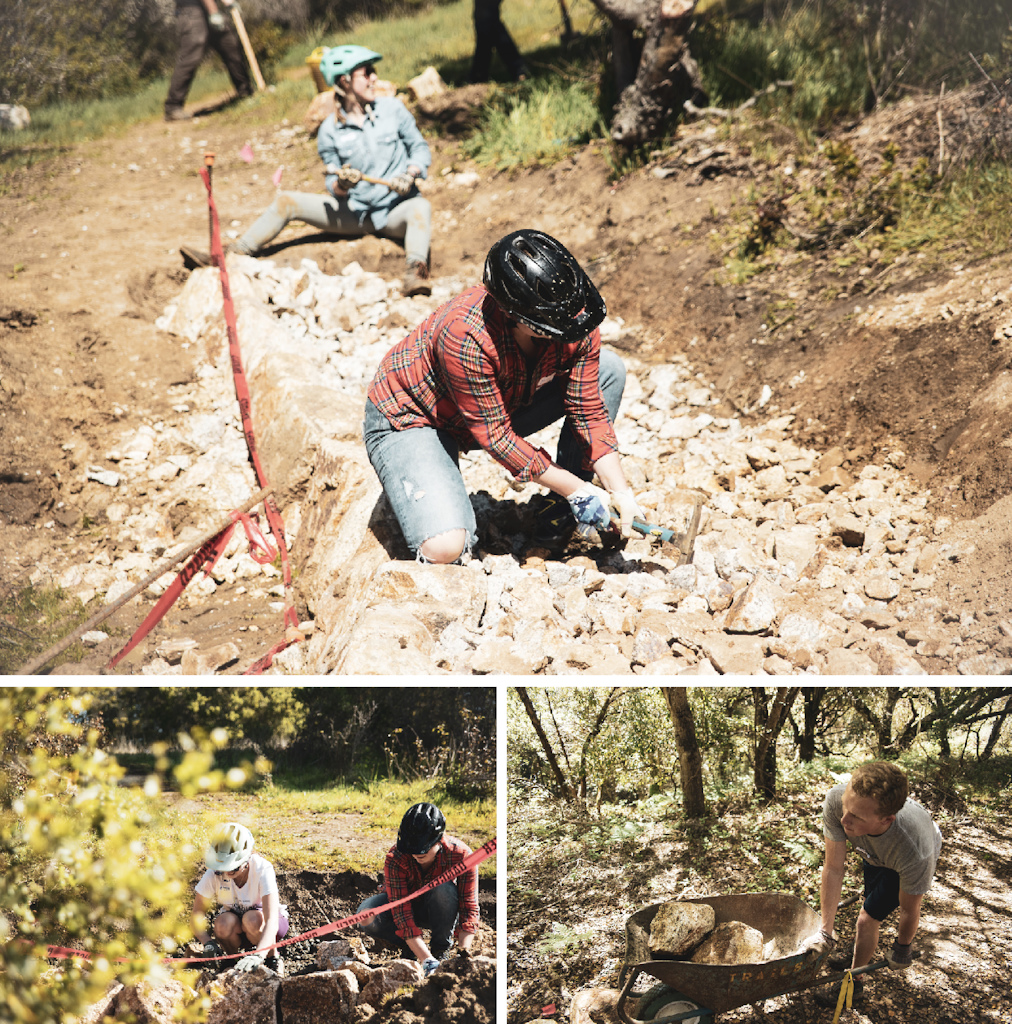 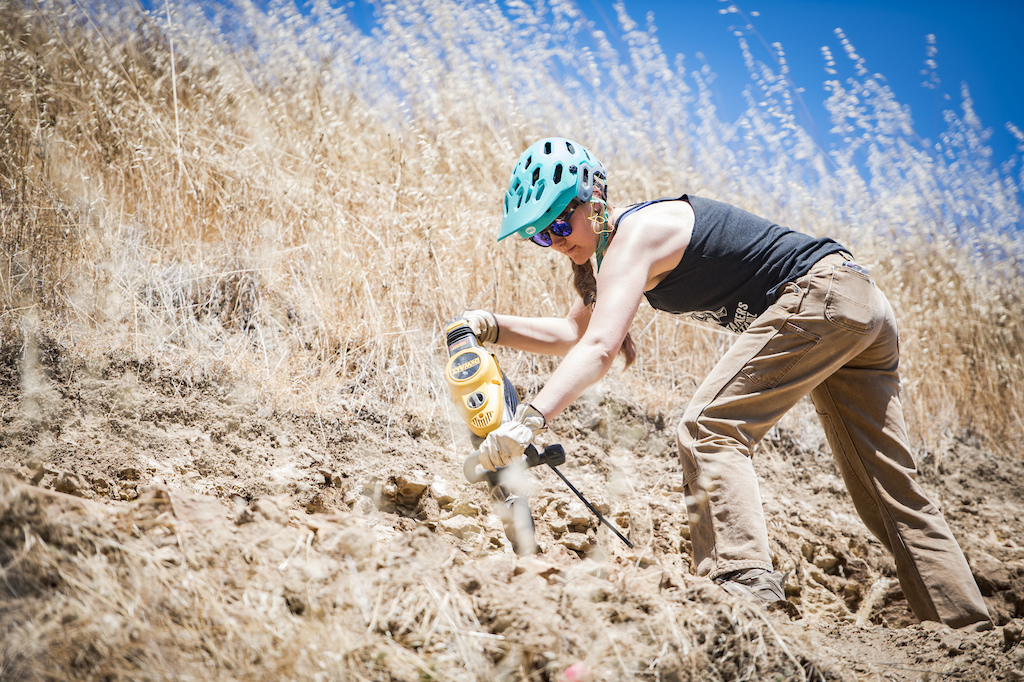 Maddie Ortenblad helped build new trails in the Glenwood Open Space Preserve during her time with MBOSC as a Community Outreach Intern. (Photo: Josh Sawyer)
San Vicente Redwoods: MBOSC took a leading role on the design of a 30+ mile trail network in the San Vicente Redwoods. This project is currently in the environmental review process, and construction is expected to begin late 2019.

Pumptrack Construction and Maintenance: MBOSC builds and maintains many local pumptracks, including assisting in construction of the Pinto Lake Pumptrack in Watsonville. 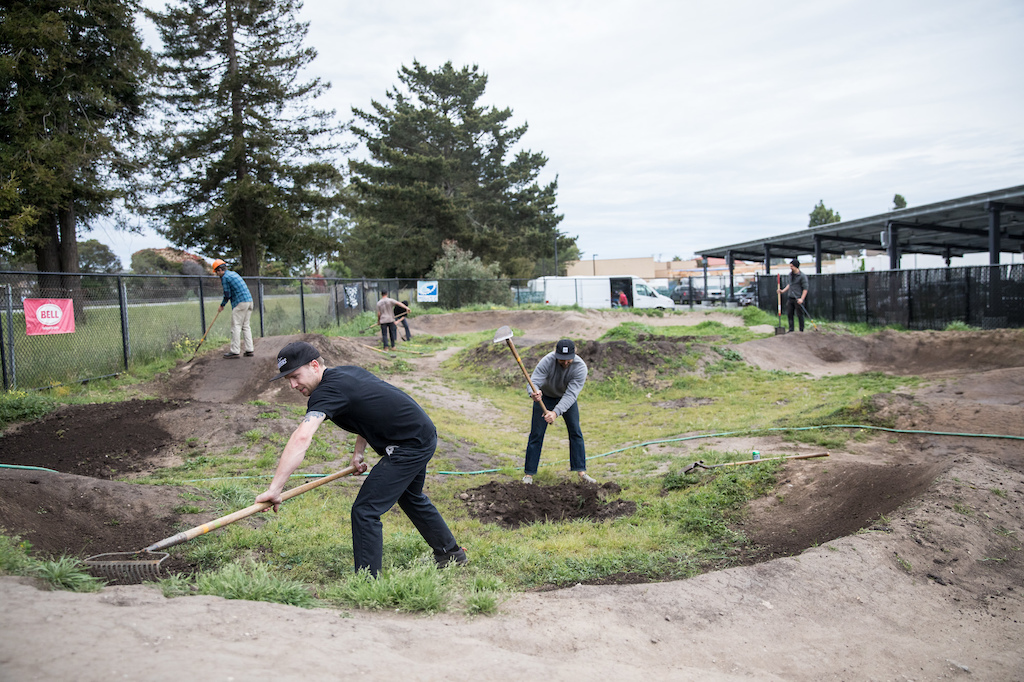 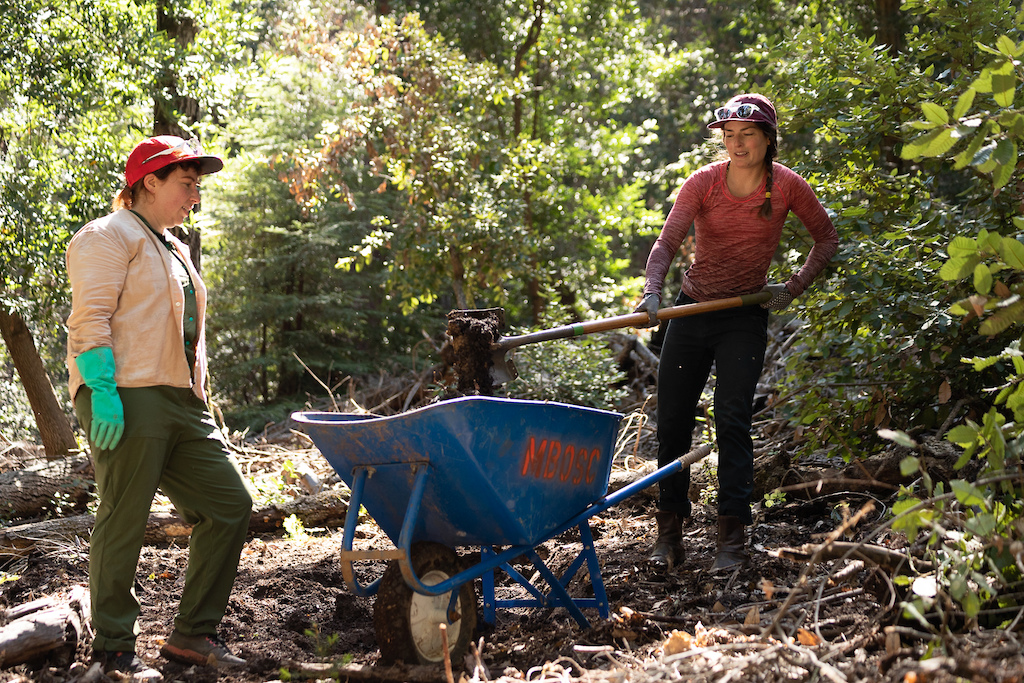 MBOSC volunteers Ali Raizin and Campbell Steers help repair Flow Trail during a Dig Day in Soquel Demonstration State Forest. (Photo: Jay Melena)
Dig Days: Each year, MBOSC hosts about 10 Dig Days, which are their premier volunteer trailwork events. Each Dig Day brings out between 70-100 volunteers, and both a Ladies Dig Day and Students Dig Day are offered to get more people involved with trail stewardship.


MBOSC has a dedicated volunteer network. From June 2018 through June 2019, 539 unique MBOSC volunteers put in an impressive 4,912 hours of trail work in various parks and open spaces in Santa Cruz County. Ibis even supports this volunteer community by providing a bike that one lucky volunteer wins in a drawing at MBOSC's annual volunteer appreciation party.

MBOSC's top volunteer, Chris Walters, gave 120 hours of his time last season, and he said: "I volunteer because MBOSC is a great organization, with awesome staff and tons of incredible volunteers. I volunteer to get more trails approved, for mountain bikes, in Santa Cruz County." (Photo: Ian Stowe)
“Ibis and MBOSC have been longtime partners working to expand sustainable trail access in the Santa Cruz area,” said MBOSC Marketing and Events Director Amanda Schaper. “With the success of our 2018 Ante Up for Trails campaign, which raised a record-setting $86,000, we've been able to add staff to our trail crew, develop new trail and pumptrack projects, and stay on top of local advocacy. We couldn't be more excited that this Ante Up for Trails campaign coincides with the release of their new Ripley!” 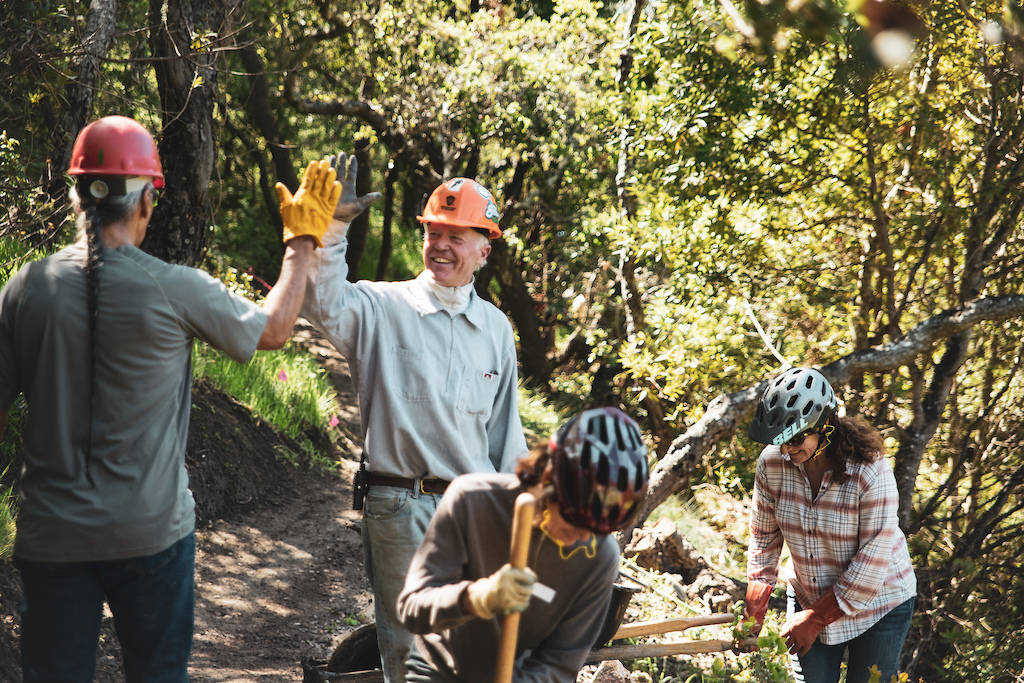 A Dig Day isn't complete without a high five from one of MBOSC's top volunteers, Tom Wilson. (Photo: Isaac Wallen)

In 2013 Ibis and MBOSC launched Own the Flow, a fundraising campaign that coincided with the original Ripley release, which raised over $40,000 towards construction of the legendary Flow Trail at Soquel Demonstration State Forest. In 2017 Ibis and MBOSC launched the first ever Ante Up for Trails fundraising campaign, which raised a record-breaking $60,000 for trails in Santa Cruz. In 2018, they were back for another Ante Up for Trails campaign and beat their previous record to raise $86,000.

The Ante Up for Trails campaign is open until 11:59pm on Monday, June 24, 2019! You could win this bike! Click here to donate and enter now! 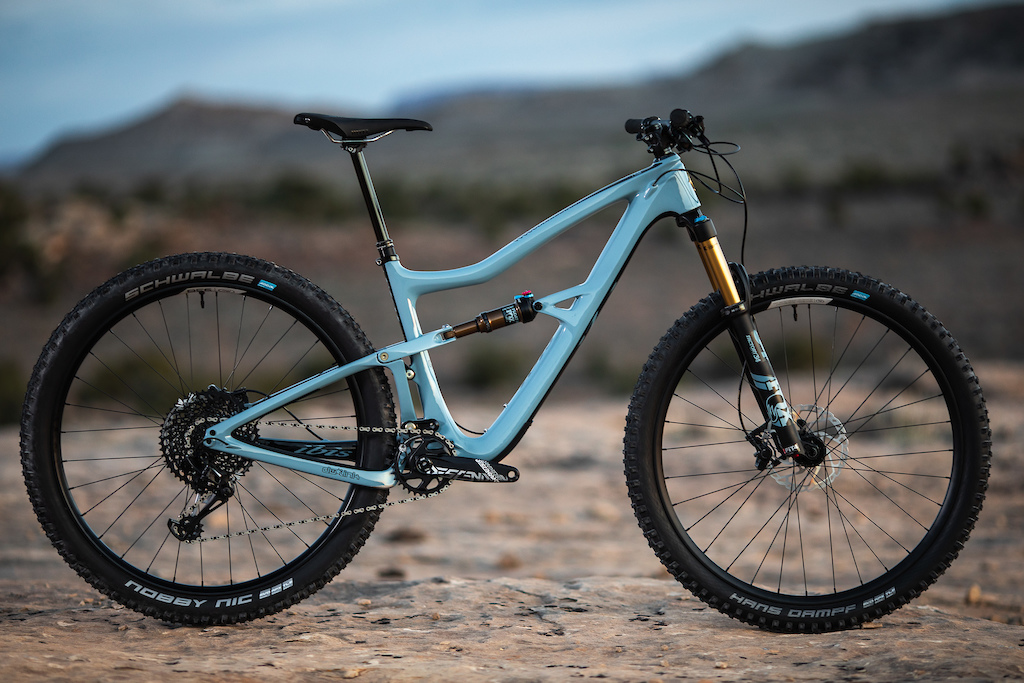 How would you like to win this bike for only $5?!


Posted In:
Other Racing and Events Santa Cruz Bicycles