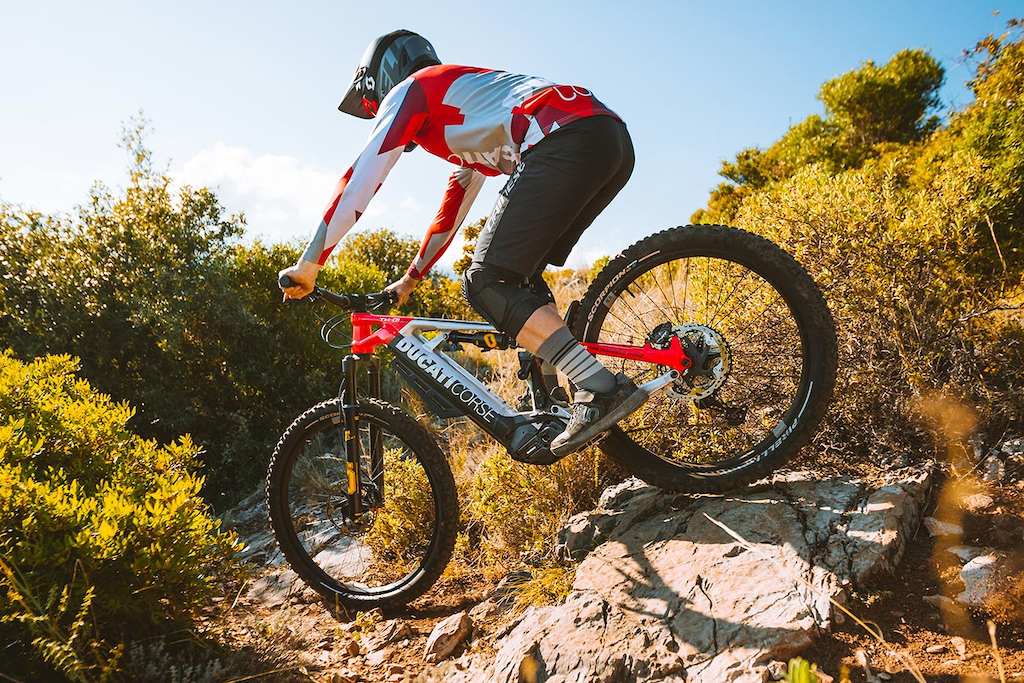 Although it's best known for its performance motorcycles, Ducati has been releasing e-bikes too in the past few years. From the city-oriented Scrambler to the 140mm travel Mig, the Lamborghini-owned brand has built up a fairly wide range and is now expanding its stable again with the 170mm travel Ducati TK-01RR.

Much like the Mig, the TK-01 RR has been created in partnership with Italian e-MTB brand Thok. Thok was started by 90s World Cup racer Stefano Migliorini and this bike uses the same aluminium frame and mullet wheel set up as Thok's TK-01 but with a Ducati Corse livery and some spec changes too. 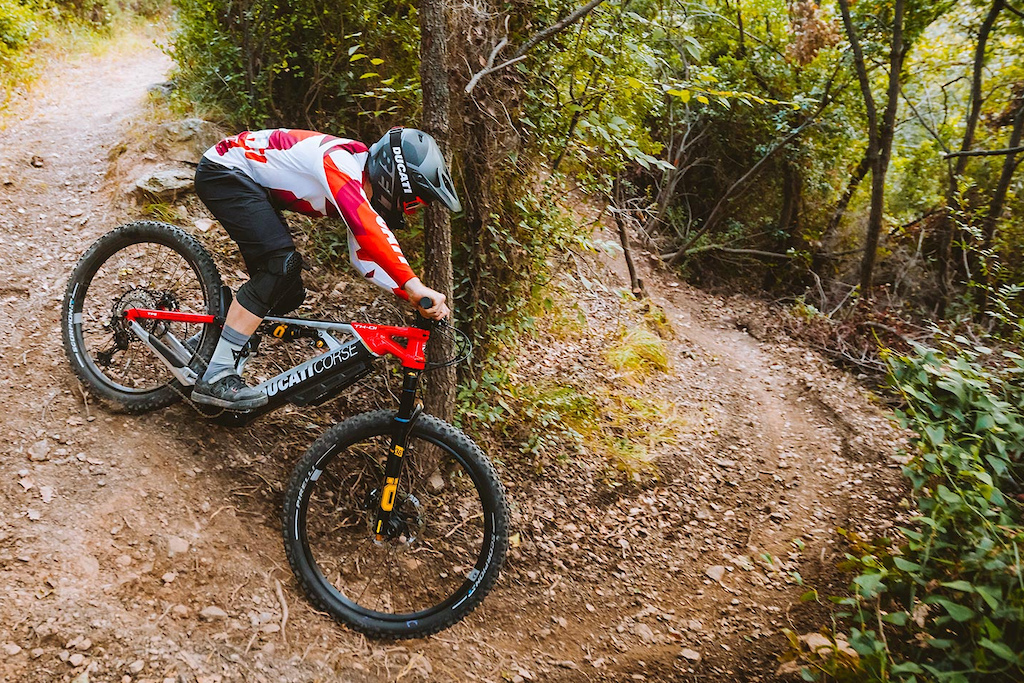 If the Thok name sounds familiar, that's because it was on its bikes that we first saw the Ohlins RXF 38 fork on and that is carried over onto the Ducati bike alongside a TTX Air rear shock. It's not often we see Ohlins suspension sold as OE on bikes but given that the Swedish marque forged its illustrious reputation in motorbike racing, it's no huge surprise to see it specced on this Ducati branded bike. The 180mm fork also uses a 1.8" tapered steerer tube that we first spotted at Eurobike last year and is claimed to offer, "a more rigid steering area".
Ducati TK-01 Details

Frame: Aluminium
Travel: 170mm (180mm fork)
Motor: Shimano EP8
Battery: Shimano 630Wh
Wheelsize: 29" front, 27.5" rear
Price: €6,990
More info: ducati.com
Much like its Thok counterpart, the rear suspension on the Ducati is driven by a TPS (Thok Progressive System) Horst Link but unlike any of the Thok models, power comes from Shimano's new EP8 system combined with its biggest battery at 603 Wh. That should give this bike a bit more power than the Thok version and, although weight isn't quoted, it should be a bit lighter too thanks to the more compact motor. There some other spec changes here including tires from Pirelli and a cockpit from Renthal, two more motorsports crossover brands, and a Shimano groupset. 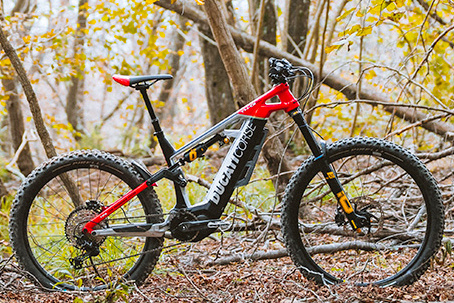 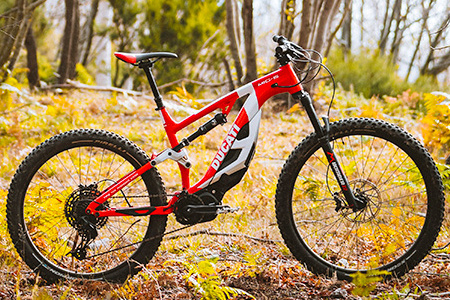 The Ducati range now includes the TK-01 RR (left) and the Mig-S (right). The Mig recently got updated with a longer top tube and steeper seat tube, it costs 4,890 Euros.
Geometry 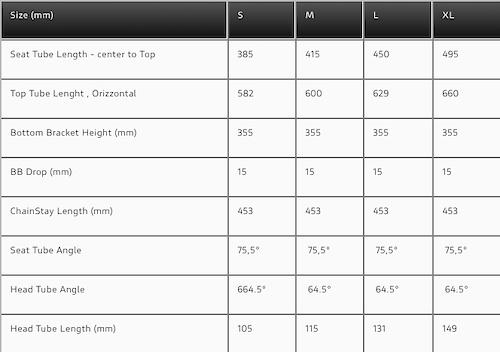 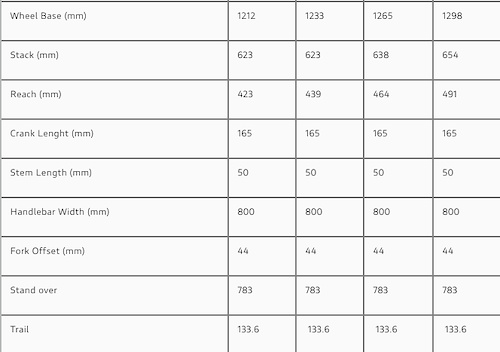 mattdent9 (Nov 24, 2020 at 2:42)
664.5 degree head angle seems unnecessarily steep, just because someone needs a small frame. Especially as the 64.5 degree on the other sizes seems pretty spot on. Punishment for the little ones.

Good one! That was supposed be laughing emojis

TheUnknownMTBR (Nov 26, 2020 at 18:43)
@jamessmurthwaite: it’s not a great look for a publication editorial staff that should have double-checked and taken the time to clarify and correct any errors before posting the article, even if they were the manufacturer’s mistakes.

therevfryslim (Nov 24, 2020 at 4:59)
@low-n-slow: was about to down prop you then i considered my self and decided your comment is valid

BenTheSwabian (Nov 24, 2020 at 3:28)
The only way in which it fits the Ducati brand is that its looks are polarizing.

BenTheSwabian (Nov 24, 2020 at 3:23)
Those two models are just rebrands. They didn't even bother to change the model name. I'd really have expected better from a brand like Ducati. If you already foray into selling e-bikes, at least do it right and come up with your own design. They surely have the engineering resources and know-how to come up with an original design, but instead chose to half-ass it.

but car brands have been rebranding bikes for years. it's not just VAG/ducati here........

tacklingdummy (Nov 24, 2020 at 8:16)
Yeah, probably licensing from another bike company. But what bike company?

onemanarmy (Nov 24, 2020 at 9:40)
That thing looks horrible. They should stay out of emtbs until they can get them some what on par with their motos. It's pretty clear they're just trying to bank on the trend and make some money. They really didn't put much effort into those.

Ryanrobinson1984 (Nov 24, 2020 at 2:45)
I kind of agree. I think it could look decent if they could do something with that bulge up front. Only under certain circumstances do you want that kind of bulge up front

philthyphill (Nov 24, 2020 at 2:44)
The new one on the left looks like it took the head tube from a Mondraker and the rest of the frame from a commencal and then just put a 1990s mud guard on the down tube

krumpdancer101 (Nov 24, 2020 at 3:20)
Let’s see the rider will have some sort of leather loafers on with some tight skinny jeans, Italian football (aka soccer) jacket and Gucci shades riding on the sidewalk lol.

BikesBoatsNJeeps (Nov 24, 2020 at 5:26)
I wonder if a bike helmet will fit better over gelled up spiked hair than a motorcycle helmet... I just don't understand how those Duc riders keep their locks so pretty.

Chuckolicious (Nov 24, 2020 at 6:32)
As much as I love messing with the Ebike haters, man, this thing is an embarrassment. At least the Jeep branded one was made for some kind of utility. Ducati: LOOK AT ME!!! Everybody. :-/

betsie (Nov 24, 2020 at 3:00)
It doesnt count any more unless you have an Akrigg style video to accompany your e-bike

hmstuna (Nov 24, 2020 at 9:10)
No, not no one. Just no one on pinkbike. They're aiming at people who have never biked before and com from motorcycles. It'll sell just because it says ducati on the side.

iantmcg (Nov 24, 2020 at 9:25)
Great to see all these moto companies getting into ebikes. Hope the traditional MTB companies are pushed to up their games and get more competitive with pricing and perhaps put more effort into defending their market share of pedal bikes.

madmon (Nov 24, 2020 at 11:26)
One would wonder why they are using 15 by 110 instead of a 20mm like a burly front fork should have carrying such large weights with an extra 15 pounds of battery and motor with all the housing, etc. Any real DH fork like a Fox 40 or Boxxer uses a 20mm axle it makes sense you can feel the difference and it's massive. They don't need a dual crown to support the 20mm. I feel that should be a basic on a 50 pound 170mm freeride bike.

OneInthePinkTwoIntheStink (Nov 25, 2020 at 7:40)
Didn't Cannondale create a motorcycle that failed miserably? Ducati would have better luck with high performance road bikes just due to their branding and that most Ducati owners -- talk more about their bikes, than ride them.

RowdyAirTime (Nov 24, 2020 at 14:07)
No photographer can fix this pregnant image. If you want to jump on the bandwagon and be a wannabe, at least try somewhat....

Noname13 (Nov 25, 2020 at 21:05)
Just buy a wicked Ducati motorcycle used because the re sale is horrible and Maintence super expensive,then learn to fix it yourself. You’ll be way happier with a beautiful motorcycle and it’s cheap than a Ebike.

Varaxis (Nov 24, 2020 at 3:16)
Doesn't send a good message when the rider is pushing away from the bike like that in all the action shots, esp a tall rider.

Bontee (Nov 24, 2020 at 5:14)
I think the TK looks very nice,certainly better than a lot of e monstrosities,I would have one like a shot.Beauty is in the eye of the beholder and all that

overconfident (Nov 24, 2020 at 5:22)
Give them a break, they're just taking integration to another level and have integrated a mudguard into the downtube

CircusMaximus (Nov 24, 2020 at 6:15)
It’s a cruel irony that the manufacturer of the sexiest motorcycles would paste their name on this embarrassment.

Bontee (Nov 29, 2020 at 12:28)
@matadorCE: Maybe different over the pond matador,but we have things called bridleways.only for walking ,horses and mountain biking (cycles).No scramblers ,I guess by scrambler you mean a petrol powered off roader.So we have loads of trails where motorbikes are banned.Only ebikes are the exception and only 250w motors.You have a big country we don’t.

Bedede (Nov 25, 2020 at 1:20)
Mind 2030 in the UK, no petrol cars sold, so how long before motorcycles are electric. Electric motorbike, electric mtb not much difference other than power and a throttle.

Bontee (Nov 29, 2020 at 5:30)
they say it acts as aducting system to cool the battery,which is a real concern when pushing hard in hot conditions,that’s why e cars have battery cooling systems,also it is very effective at keeping sheep poo and mud off yer face.So maybe not pretty to some but if you have ever ridden through deep mud these things are a godsend.

Bontee (Nov 25, 2020 at 9:45)
really,you think,have you seen the haibikes,meridas,treks,norcos and shed loads of others.Look,you are either going to get into ebikes or not,but to criticize this is abit unfair.It looks better than most full fat emtbs .Tell me one that you percieve as better looking.
I have been riding mountain bikes since the late 80’s,when rigid was the only way and at best 48mm of lousy front suspension.
Now I am 60 and as an ex motorcyclist and 30 years as a serious mountain biker ,this is perfect.It will allow me to ride 10 days back to back off road ,do 30 miles a day ,and not leave me wasted after day 7,and best of all I get to finally own a Ducati,which I could never afford when I was a biker.
A couple os small points ,this is a pre production bike,Ohlins need careful set up and the tyres are shit,so tune the suspension ,which you would do anyway for off road riding.Switch the tyres to a pair of Maxxis or Schwalbes ,and you are sorted,and lastly,despite the haters I just dropped a deposit on one today.See you on the trails

DidNotSendIt (Nov 24, 2020 at 5:44)
Plus with all the extra surface area on the frame with the battery housing etc, there'll be room for the 'One life. Live it.' sticker.

victordeltalima (Nov 30, 2020 at 13:23)
I came here looking for this. Ducatis have steel frames and that should have at least been addressed in the article.

shadethechangingman (Nov 24, 2020 at 9:17)
for when rockin up to Surreh Hills on the latest Santa isnt quite Dentist enough ;-)

Charlotroy (Nov 24, 2020 at 12:41)
just came here to say to all those ebikers who hate the term moped...look who's building ebikes, a motorcycle company. Fuck ebikes

snydryder (Nov 24, 2020 at 7:22)
The jersey is cool, the bike will only appeal to the most ardent Ducati fans who most likely will never take it off road.