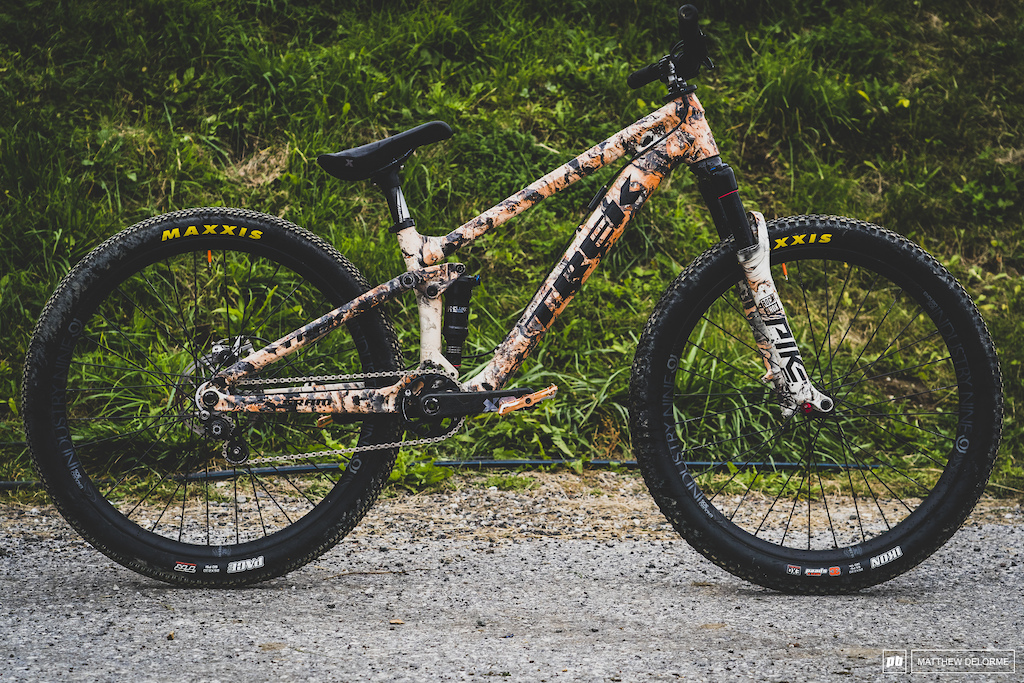 It was another Crankworx and another win for Emil Johansson at Innsbruck this weekend. That makes it three in a row following his first Joyride crown in Whistler last year, and his win at Rotorua earlier this year. Another Crankworx also means another custom bike for Johansson- this time it's a hydro dip style frame. Hydro dipping is a process where paint lays on top of the surface of a container of water and is then transferred on to an object when it is dipped into the water; for this frame the colours were marble with inspired swirls of orange, black and grey. 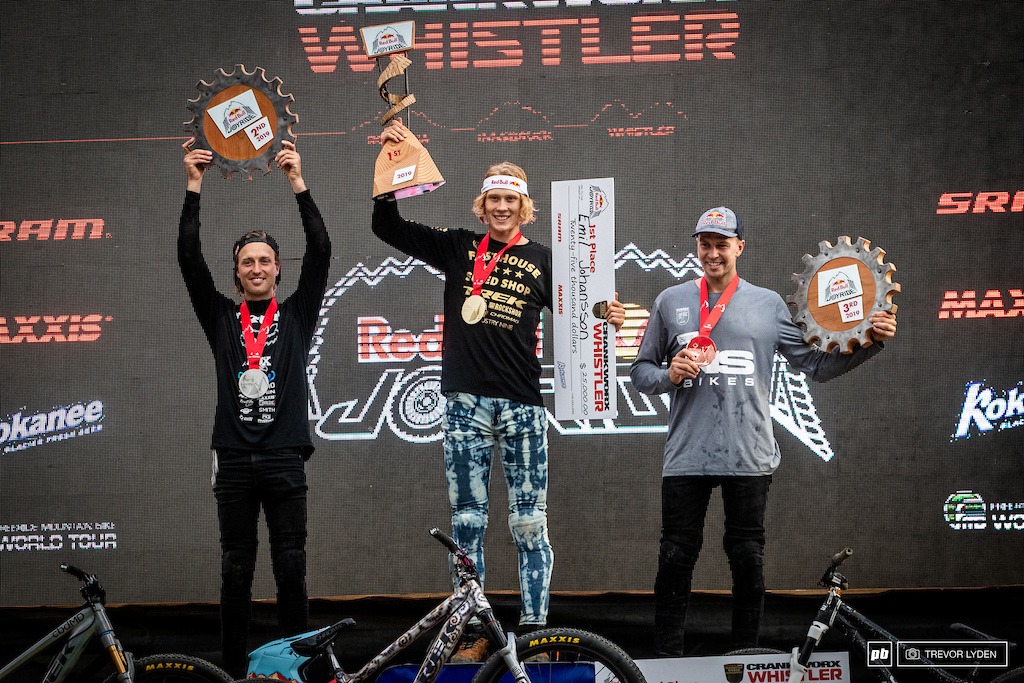 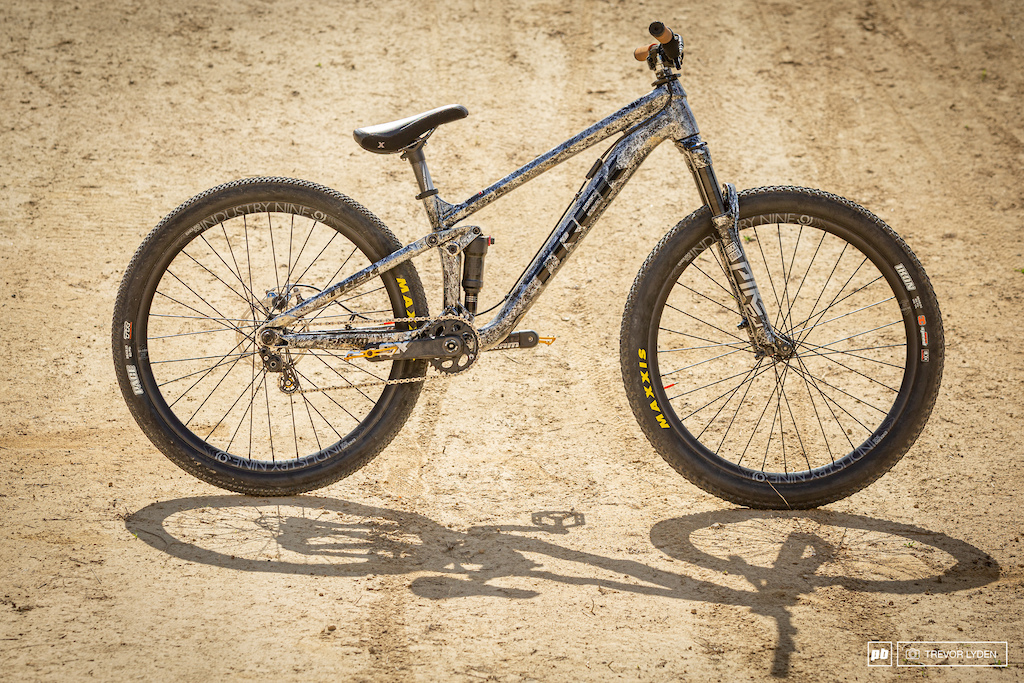 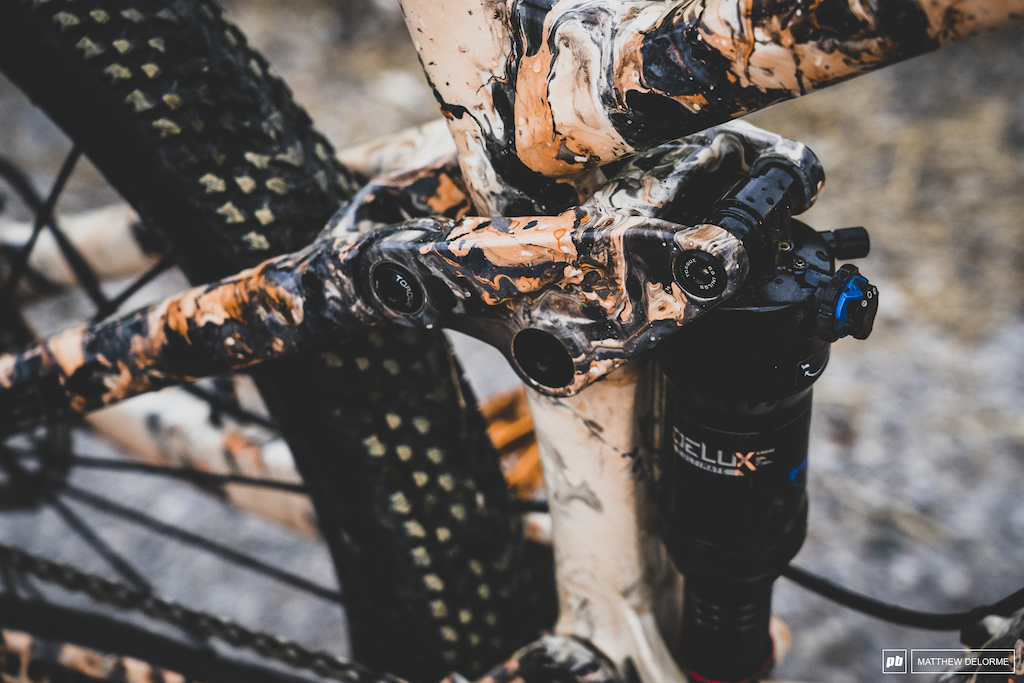 Hydro-dipping creates a truly unique frame that will be almost impossible to replicate. 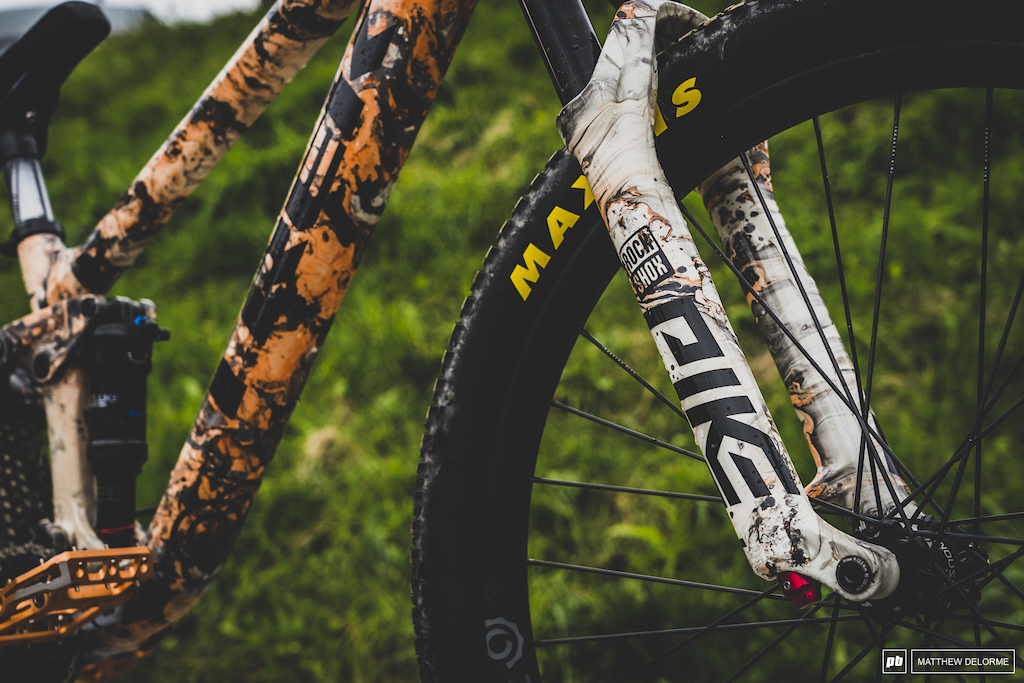 RockShox has also joined in the party with these custom lowers. Is anyone else getting Load/Andres Serrano flashbacks? 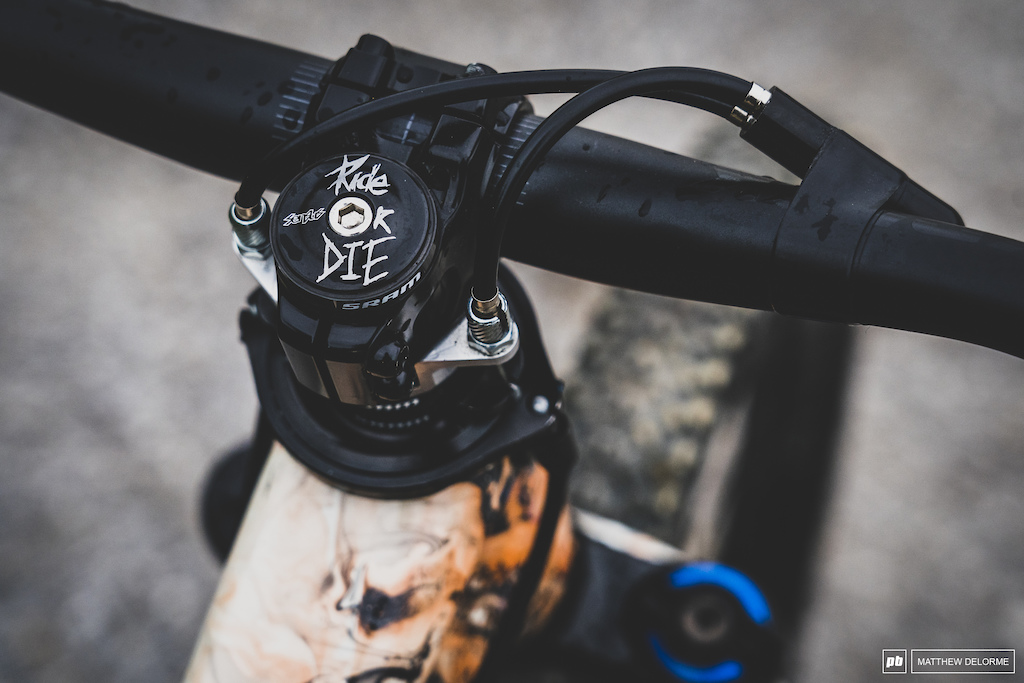 Cable management is sorted via a mechanical gyro, which allows Emil to spin the bars as much as he wants without having to untangle a cable. Hydraulic gyros are also available, but still fairly rare among slopestyle riders. 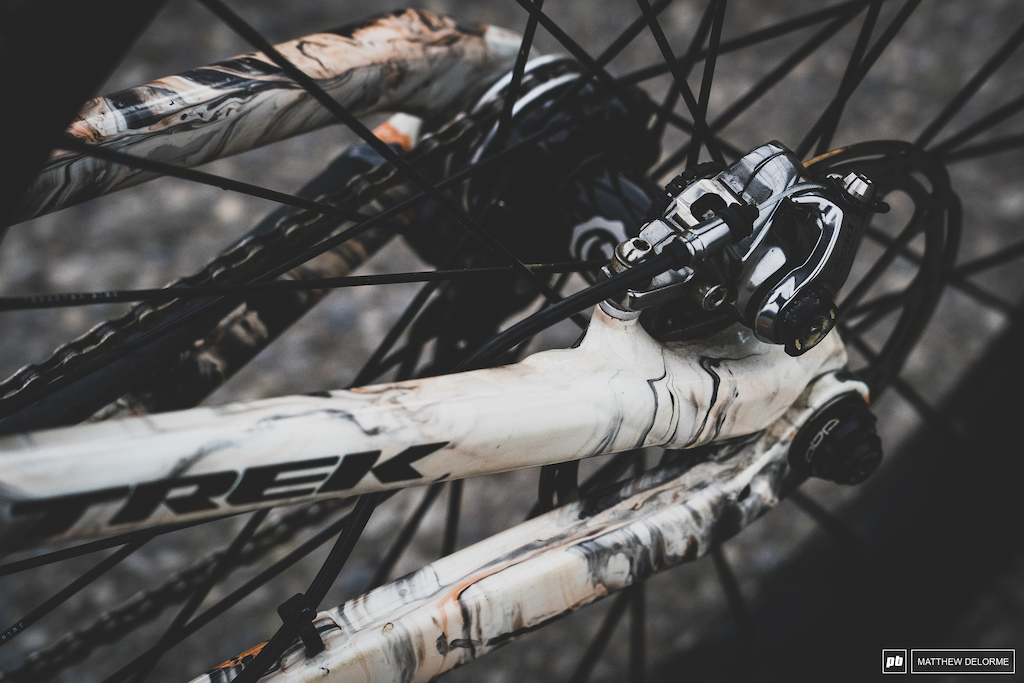 The mechanical gyro connects to this Avid BB7 Road SL caliper. Yes, it's not as powerful as a hydraulic system but its compatible with the gyro and its titanium hardware saves a bit of weight. 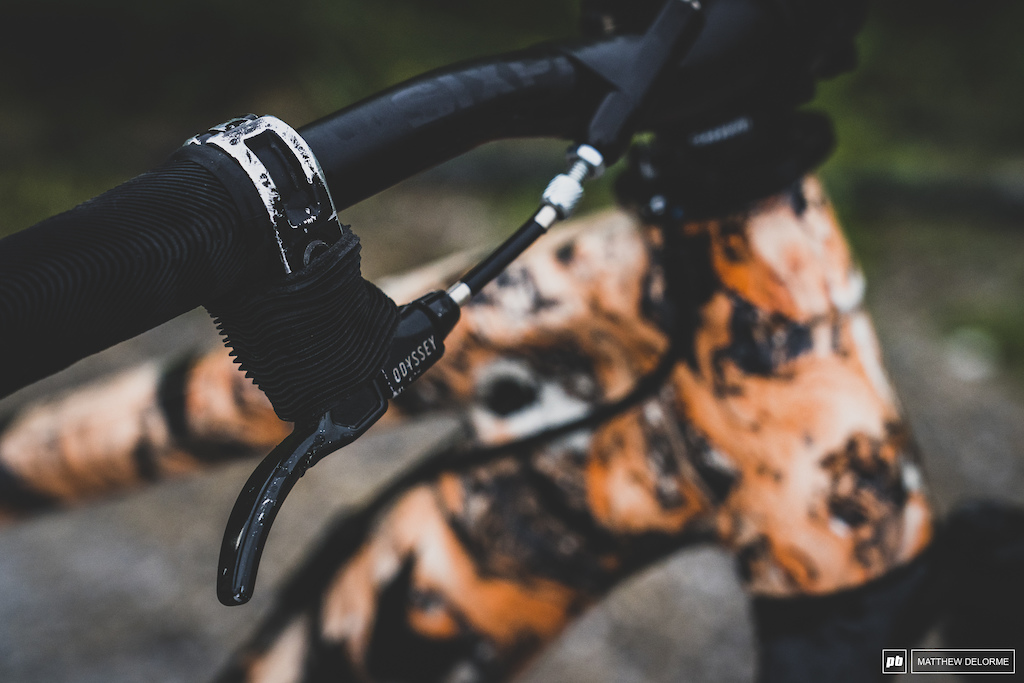 The brake connects to an Odyssey BMX Monolever. We don't have confirmation from Emil on this, but we imagine he's chosen this lever as it sits far away from the bar so won't get in the way when he's trying to catch his bars. It looks like Emil is also running some signature Sensus grips. 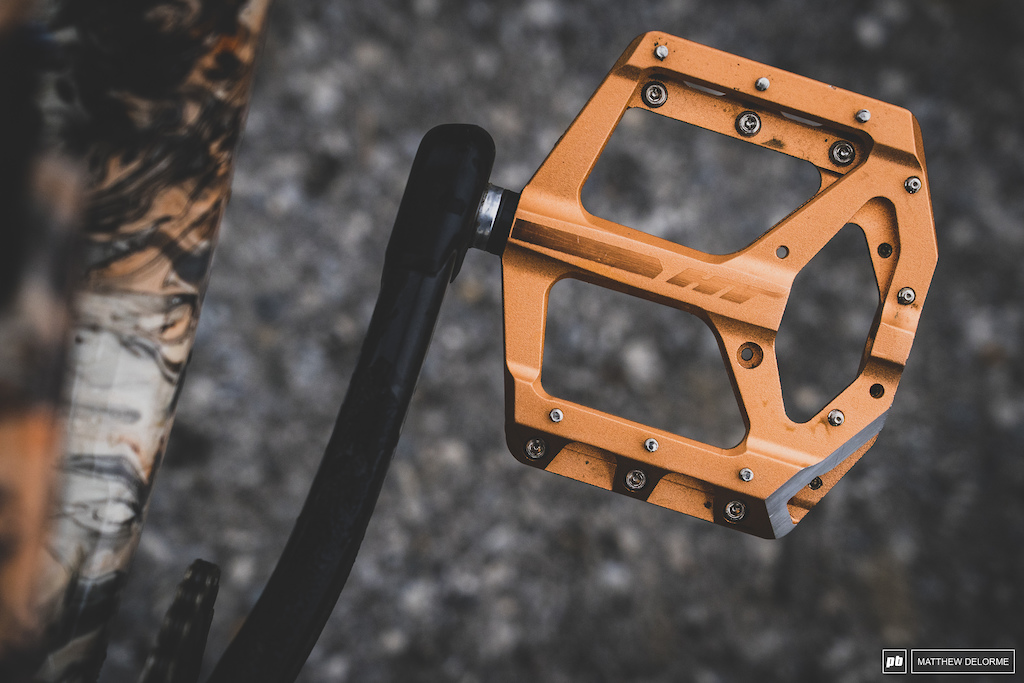 HT contributed some orange pedals to the build. 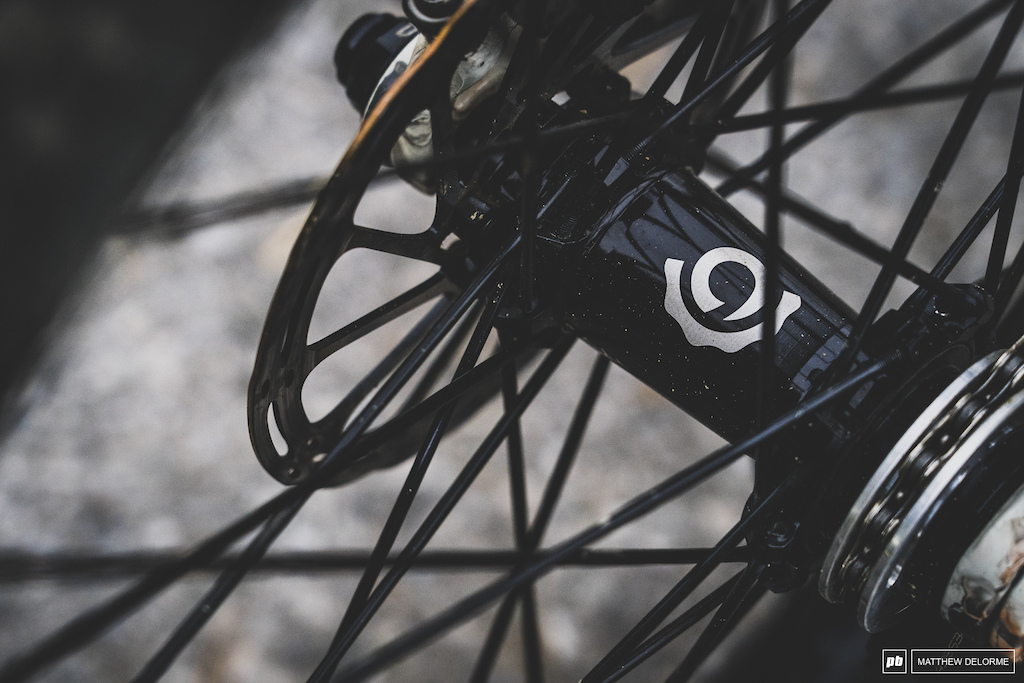 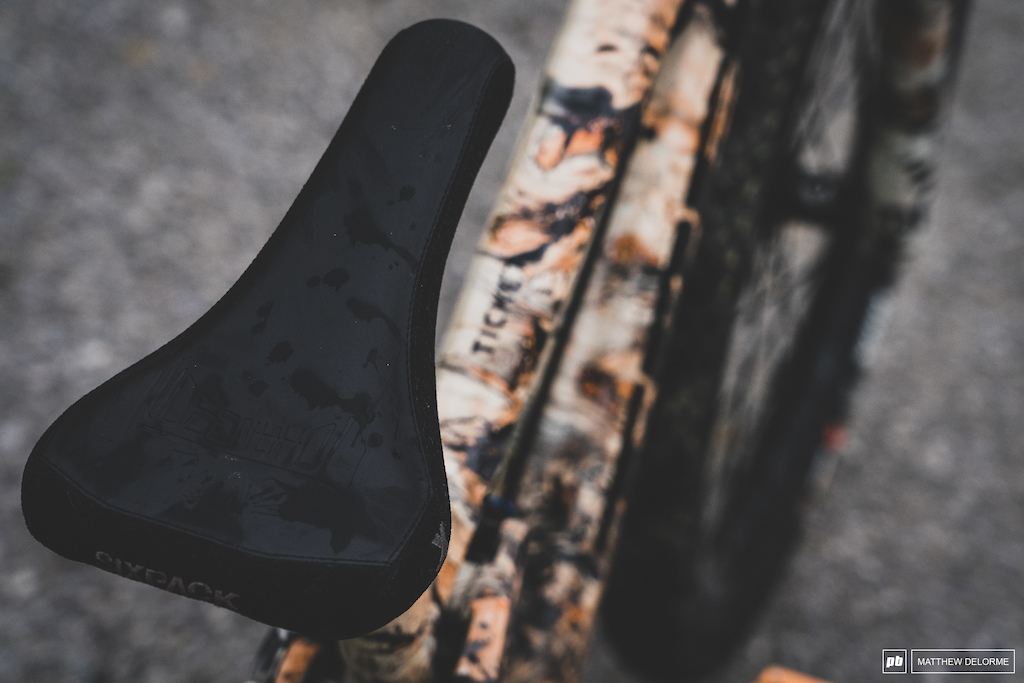 Remnants of the champagne shower on Emil's saddle. 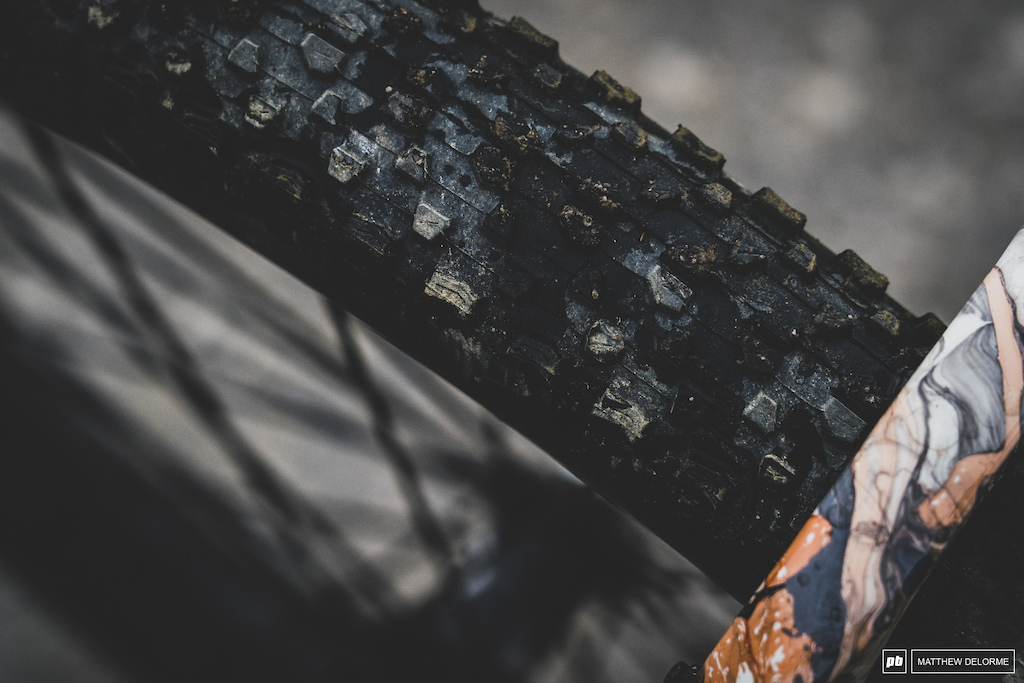 Emil was running a fast-rolling Maxxis Pace in the rear with an Ikon XC tire up front for a bit more bite in the overcast conditions in Innsbruck.

jmartinbiking (Oct 5, 2020 at 9:53)
Love seeing all the special things the slope guys do to make their bikes as comfortable/trickable as possible. Keep these coming!

wheelsmith (Oct 5, 2020 at 10:43)
Eventually, slope riders will be brakeless n lidless with just a trucker hat that flies off every time they do a spin trick...

InstantBreakfast (Oct 5, 2020 at 12:50)
@ridealltheb1kes: Pretty sure its a dylan stark reference

oathead (Oct 5, 2020 at 11:28)
Wish we had a detailed shot of the single speed tensioner. Anyone know what it is? Looks like there's some chain retention "guides" on either side of the cog, but hard to tell from the big photo what he's using for an actual tensioner. It looks like a single speed specific tensioner instead of a repurposed road or short cage derailleur.

adrennan (Oct 5, 2020 at 13:09)
@oathead: I had thought about single speed for my dh but after seeing the pricing, i realized geared really doenst cost much more.

jwestenhoff (Oct 5, 2020 at 20:10)
@adrennan: You can use an old derailleur to bodge together a decent single speed! Or there's cheaper tensioners out there. Obviously the higher end stuff is nice but if you want to try it out no reason to spend hundreds of dollars on it.

ProperPushIrons (Oct 5, 2020 at 22:42)
I used a Rohloff dh tensioner on a downhill bike for a while. It was good, no noise and pretty sturdy little thing. If you can find one of those for a reasonable price I’d recommend.

letsgethurt (Oct 11, 2020 at 10:40)
An old zee dr can be hacked to a chain tensioner with a clutch. There's a howto on the singlespeed dh thread

rosemarywheel (Oct 5, 2020 at 18:46)
Trek needs to offer the Ticket frameset as part of there Custom 'Project One' lineup. Every other frame I would just get the stock color.
[Reply]

rosemarywheel (Oct 6, 2020 at 6:57)
@megatryn: Pictures please. I have considered painting my own frame (not on a Ticket, though) but am not confident in my painting skills.

megatryn (Oct 7, 2020 at 3:35)
@rosemarywheel: Check my profile. It's not very visible in pictures, because it's matte black with sparkles.

megatryn (Oct 9, 2020 at 1:07)
@rosemarywheel: I used the Montana Glitter Effect spray-can, sprayed on while the last matte black paint was still tacky. Had a couple of alternating layers of black and glitter to give it depth and tone the glitter down a bit.

plyawn (Oct 5, 2020 at 11:47)
Kind of reminds me of all the stolen bikes I see the skids riding downtown that have been "hydro dripped" with a can of rustoleum

noplacelikeloam (Oct 5, 2020 at 10:02)
For those scratching their head wondering how a gyro works;