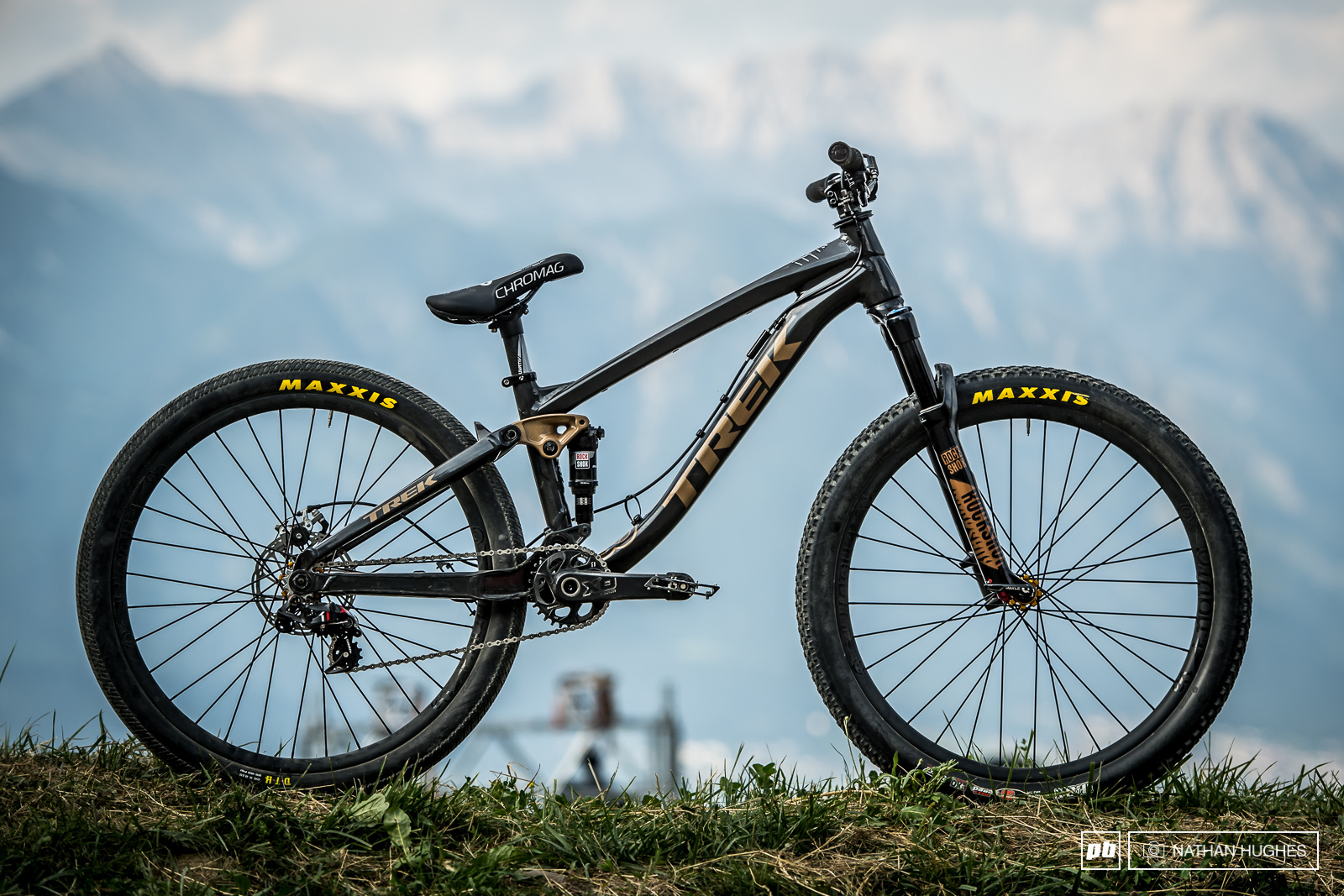 Emil is also the newest addition to Trek’s C3 program, where he joins slopestyle heavy hitters Brandon Semenuk and Brett Rheeder. We caught up with Ray Waxham, Emil’s mechanic for this weekend, to learn more about the stylish Swede’s custom Trek Ticket S. 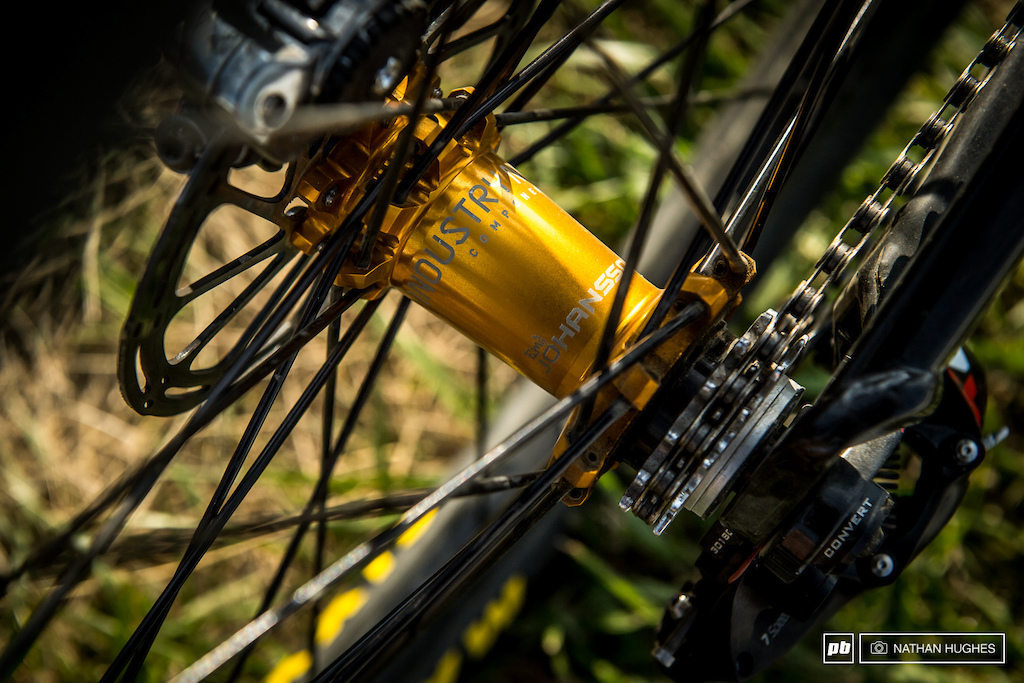 Emil's Ticket is set up as a single speed, but there's an additional, larger cassette cog on each side of the chain to help ensure that it absolutely can't come off. 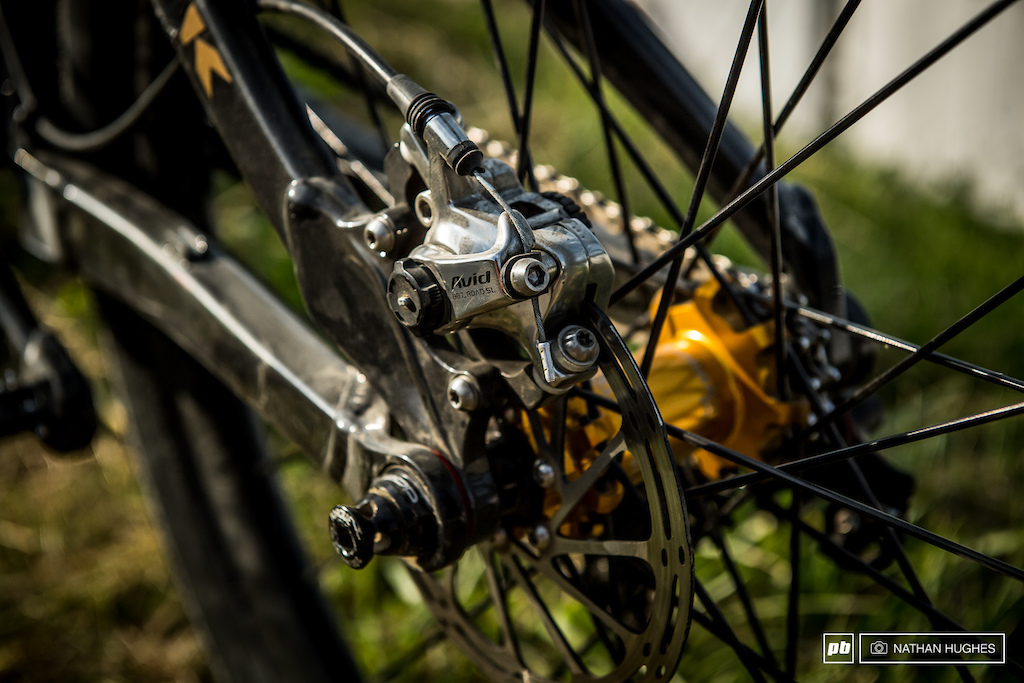 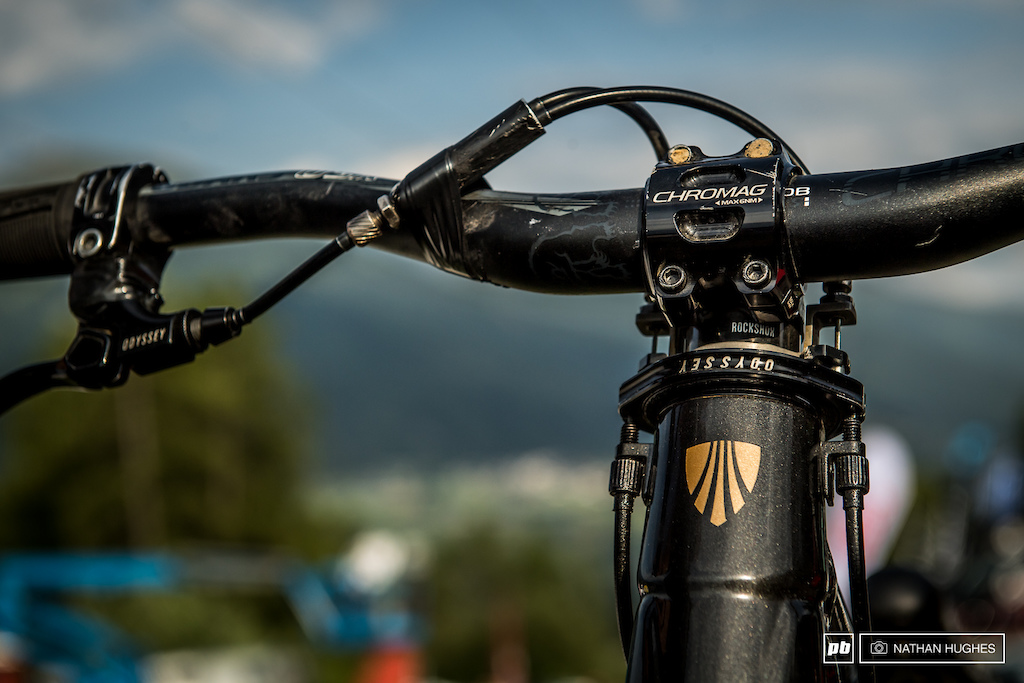 Emil's bag of tricks includes a 360 triple bar spin, so he runs an Avid mechanical disc brake caliper paired with an Odyssey gyro and brake lever in order to avoid worrying about tangled brake housing. 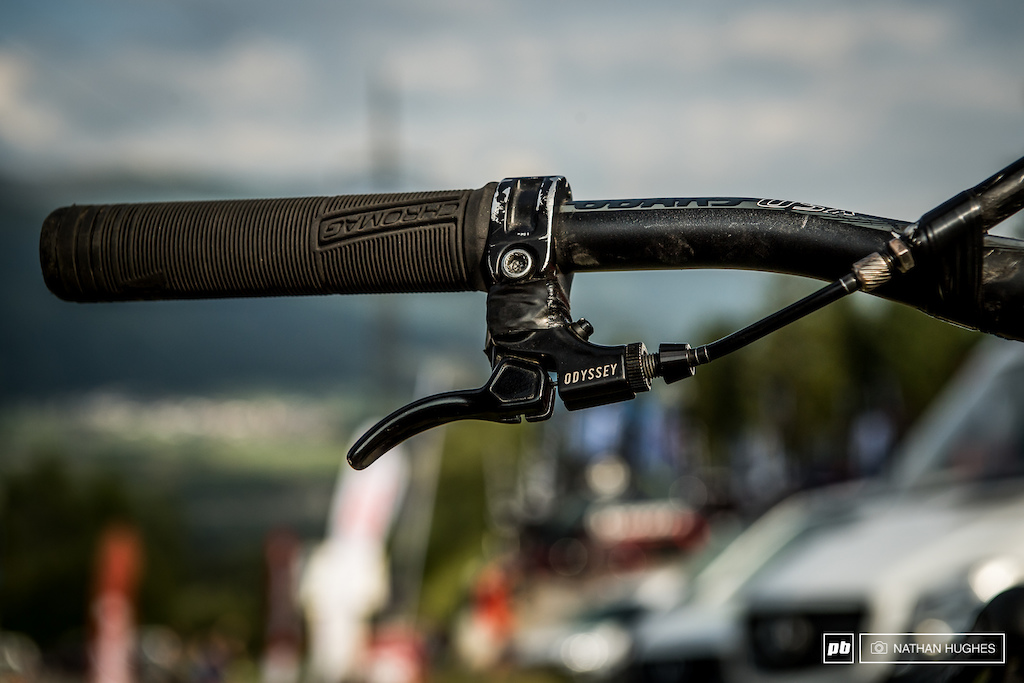 Slopestyle bikes may seem simple - after all, there's usually only one brake and one gear - but that doesn't mean that riders aren't extremely particular about their setups. SRAM helped Emil add a set screw to his brake lever in order to get it exactly where he wanted it. 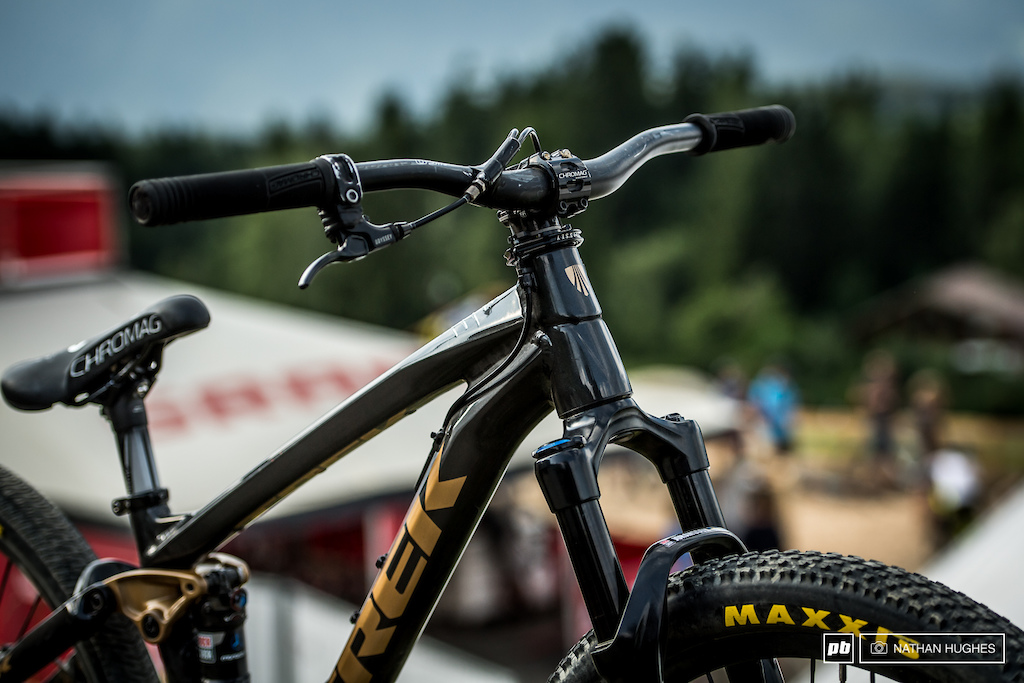 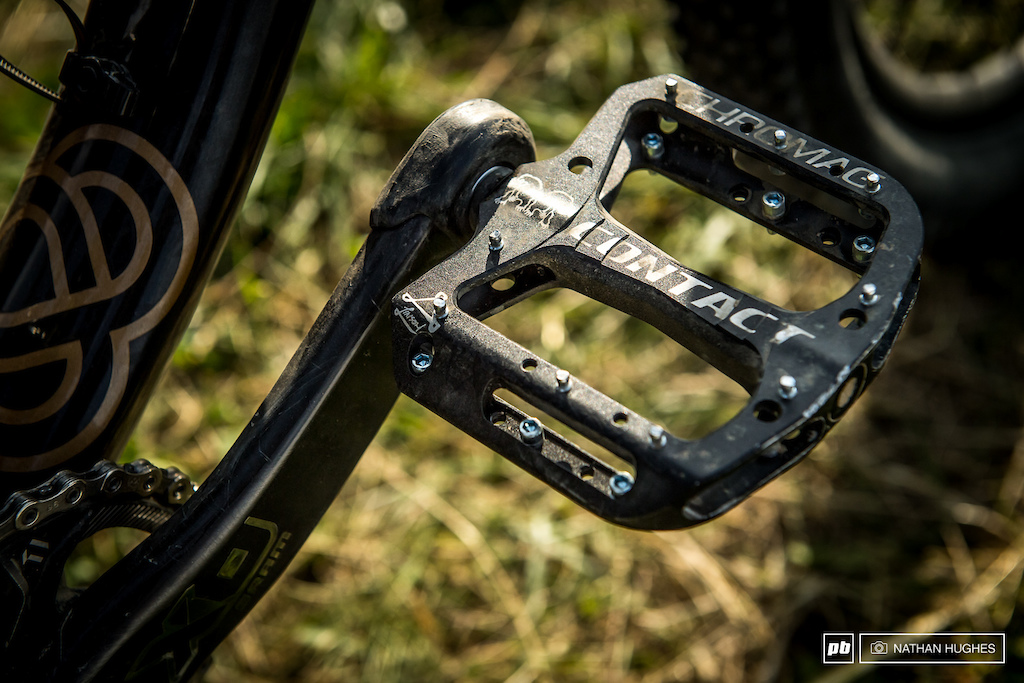 In order to keep the cranks from rotating too much during tailwhips and other maneuvers a rubber sleeve is installed over the crank's spindle. A bolt is then threaded through the center of the bottom bracket shell to apply pressure to that sleeve, allowing the rider to set the perfect amount of resistance. 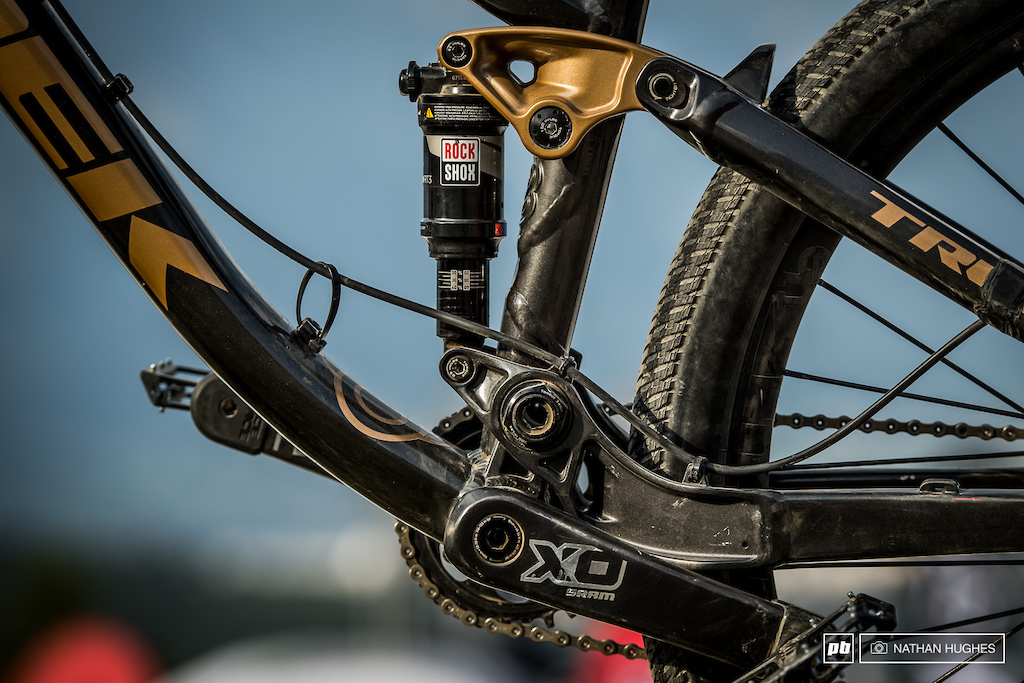 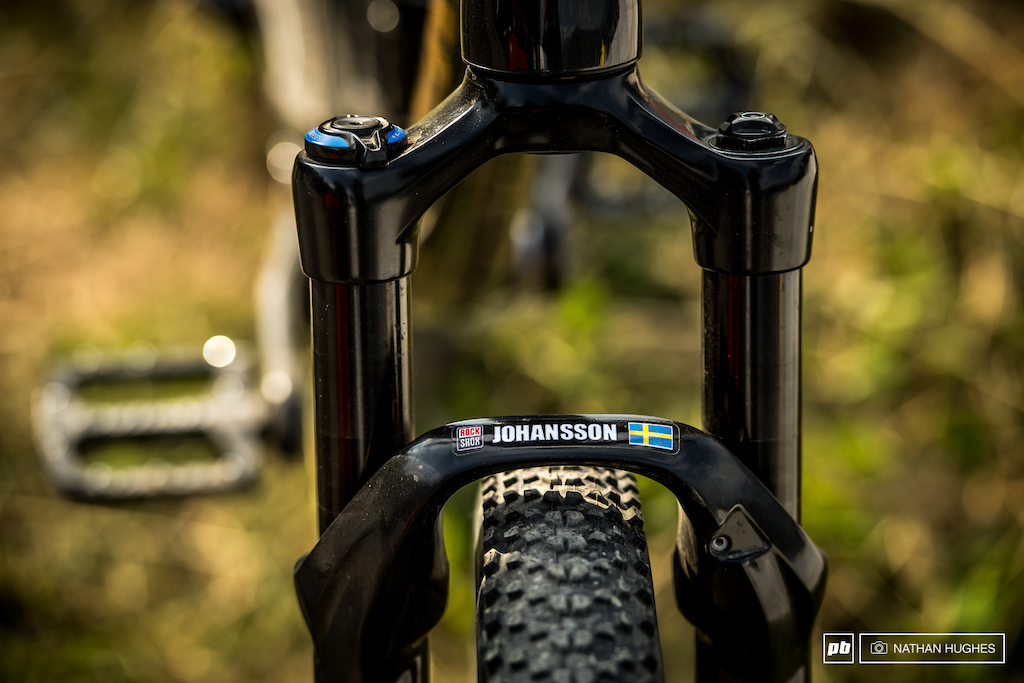 Shock pressure? Very, very, very, firm, as in 350 psi, the maximum pressure for the RockShox Monarch shock. The Ticket has 100mm of travel, but it would take a seriously harsh landing for Emil to go through all of the travel. Tire pressures are between 55-65 psi, and the fork is also set up extremely stiff - this definitely isn't a cushy all-mountain rig. 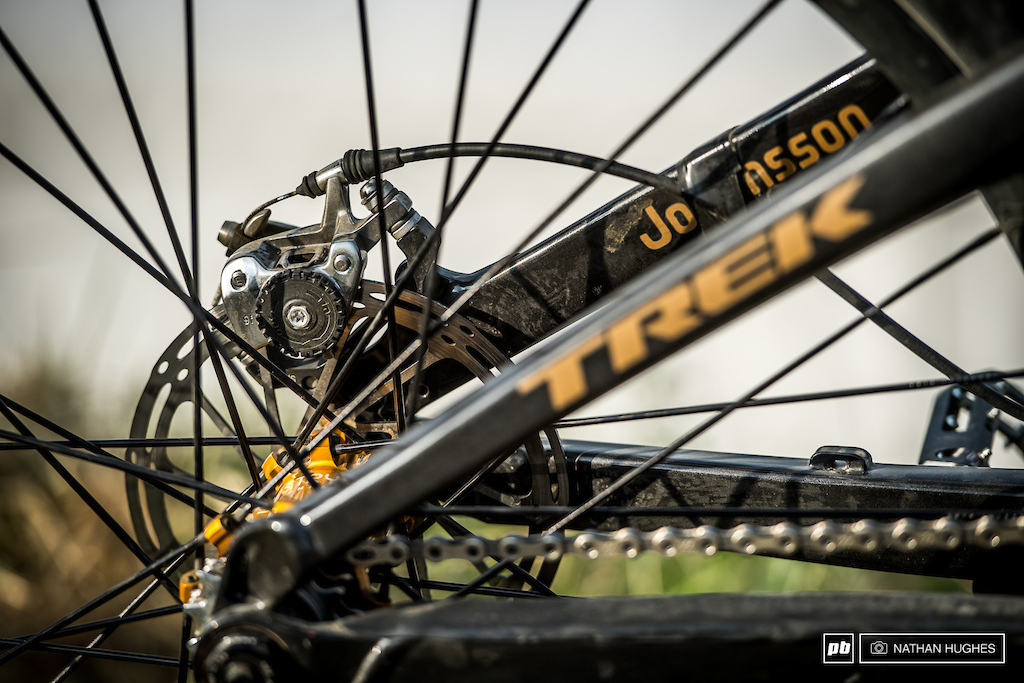 anchoricex (Jun 23, 2017 at 22:47)
inda crazy that Semenuk kind of set the standard for slope builds, especially for the trek bikes. Errbody got the oddysey lever, avid road caliper/brake & gyro now.. shit the liaison grips/contact pedals too.

Good time to plug the Liaison grips, f*ck lock ons these things plus a strip of fabric-y athletic tape on the bars underneath them are unstoppable. Wear down fast but god damn so much real estate for the hands. Run them on my big bike.

Shout outs to the two bigger cogs holding the chain in on the rear. That's nifty.

Does anyone know if Trek is selling this model of the Ticket S frame to consumers? I know they updated it like... last year or the year before and only Semenuk was running it for a while, but I never saw any hit the used marketplace.

seraph (Jun 24, 2017 at 0:40)
This is actually the older Ticket S frame, you can see it has the Full Floater suspension design. The new frames are different and are not yet available to the public.

dannyboybiker (Jun 24, 2017 at 2:16)
@seraph: Semenuk's frame for this year has the same full floater linkage. Their new production session isn't floater any more, so maybe that's something they were trying out?

Just checked that Rheeder was running the non-floater frame at Crankworx last week. So who knows?

Vans4life14 (Jun 24, 2017 at 14:21)
Rheeder's bike is still a full floater. The Ticket S frame with the full floater is still available on Trek's consumer website although if they continue to produce it, I think it would make sense to ditch the full floater to gain stiffness especially since these guys run max air pressure in their shocks so i don't think they care too much about how it feels just as long as it takes the edge of harsh landings.

dannyboybiker (Jun 24, 2017 at 16:24)
@Vans4life14: You can clearly see here that shock is mounted to the frame and therefore not a full floater design.

Vans4life14 (Jun 24, 2017 at 19:53)
@dannyboybiker: you're right. I was comparing it to how the shock mounts on the new slash but this one is on the seat tube so it still looks like a full floater from far away. Interesting. This is why I love slopstyle bike checks; all the fine details.

I might even work out how much the fixed lower mount design reduces the travel, if I have some spare time and get bored this week.

dannyboybiker (Jun 25, 2017 at 3:19)
@Vans4life14: Just did some quick calculations and the fixed lower shock mount will reduce the movement of the top shock mount to 1.5" or 38mm (the shock stroke), with the full-floater mount it can move an extra 11.6mm giving it an effective 2" or ~50mm stroke.

If it had a flat leverage curve that'd reduce the travel to 76mm but it's bound to be progressive so it'll 'probably end up with 80mm.

Kramz (Jun 24, 2017 at 15:00)
The inverted, and inward brake lever trend never caught on for me. I tried it, it didn't help anything, but I wasn't doing huge tricks, and sometimes do trials type things so maybe that's why. I like my brakes too much, half the stuff I do is brake oriented, but should really just pro-sheep everything if I want to be good.

What is weird is that Ryan Nyquist is running a smaller front than rear.

- meant that running a wider front isn't weird, not the other way around, soz.
But then again doing half bars and landing with your bars backwards is weird enough for me!

foxphotog (Jun 24, 2017 at 7:16)
If they're worried about chain jumping off, to the point of running two extra cogs, why not lose the rear mech? Is it just for sponor logo?

aaronfpeet (Jun 24, 2017 at 8:11)
It also functions as a chain tensioner, which you'll need as the bike's chain length will grow and shrink depending on where the bike is in it's travel.

gtill9000 (Jun 24, 2017 at 8:14)
The rear mech is there just to take up chain growth. If the main pivot was concentric with the BB then they could run it like a true SS. Like this one that I just found on google:
www.pinkbike.com/news/Specialized-Debuts-Dual---Suspension-Slopestyle-Bike-at-Crankworx.html?vm=r