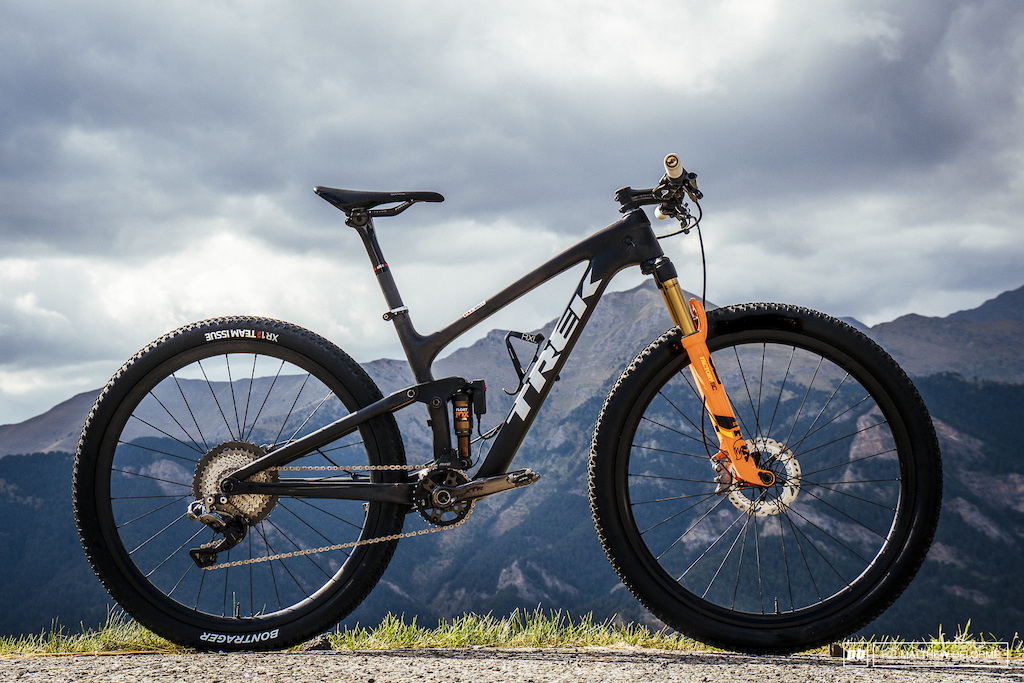 Emily Batty may have missed out on a medal at this year's summer Olympics in Rio by just a few bike lengths, but she has consistently proven herself a podium contender over the years. Batty's most recent Palmares include a bronze at the 2016 World Championships, a gold medal at this year's Canadian championships (her second national title to date), and the top spot in the 2015 Pan American Games. In short, Batty is always a threat for the win.

Here's a glimpse of her ride for this final round of the World Cup. Batty is known for her willingness to pare down her rig to the barest of essentials--opting, for instance, to ride a Trek Procaliber hardtail in Rio. Clearly, she's expecting something more from this course in Andorra, as she's brought along her Trek Top Fuel. 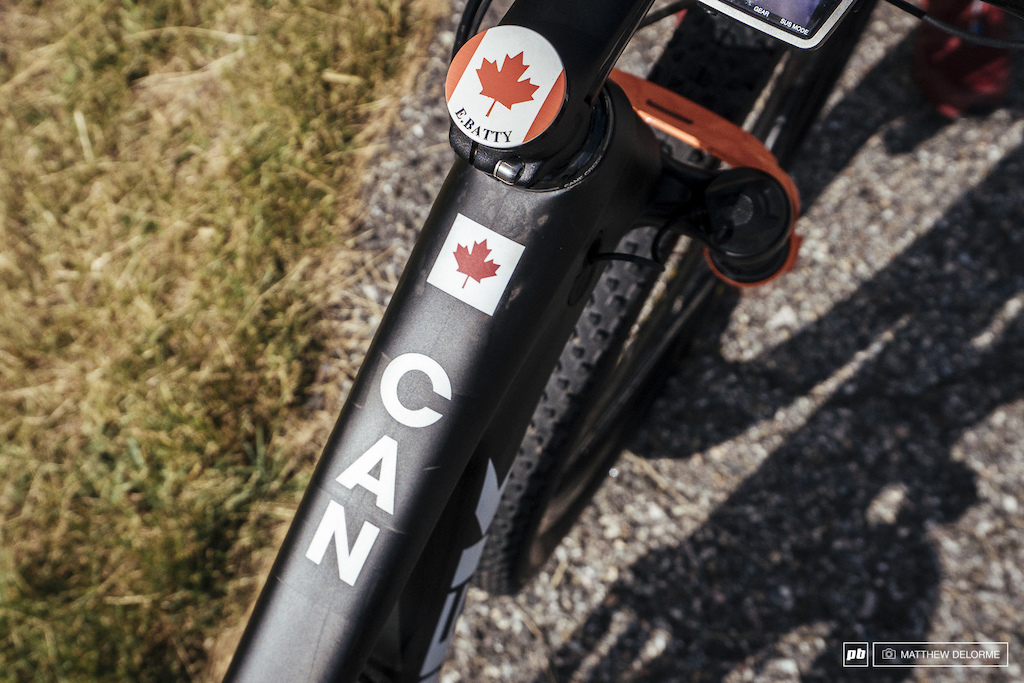 Represent. Just in case anyone was somehow foggy on this point: Yes, Batty is from Canada. Custom stickers came courtesy of Victory Circle Graphix. StemCaps.com supplied the custom cap. 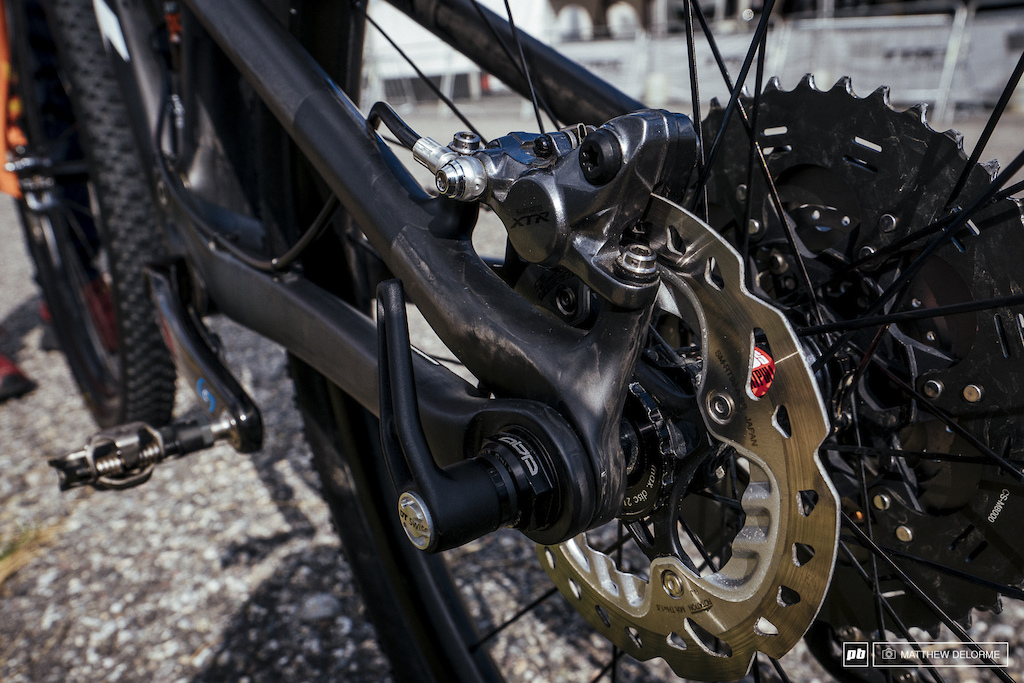 It's not as if Batty's personal Top Fuel weighed much in the first place. At 21.76 pounds Batty's full-suspension bike was already a testament to just how far companies can dive down the rabbit hole while paring down every last ungrateful gram. But, clearly, there were still some grams to be slaughtered here. The paint had to go. This frame eschews the teal-colored paint you may have seen on Batty's previous race bikes in favor of a simple UV-inhibiting clear coat. Batty ran the same mean-lean finish on her hardtail at this year's Olympics in Brazil. And, no, we don't know how many grams were actually shaved here, but someone thought it was worth doing. 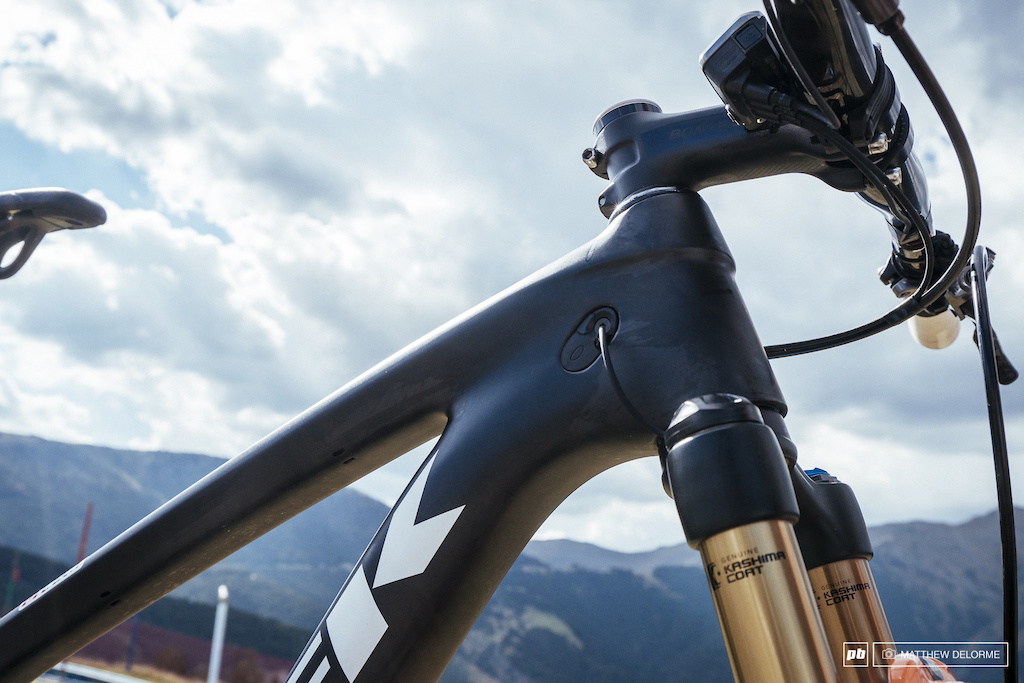 Some days you just wake up feeling like your bike's paint job weighs too much...

Remember the days when a cable would suffice? Well, for most of us, cables still do get the job done. Handily. But a whole lot of pros are running Shimano's Di2 drivetrains and Batty's no exception. She's running a single-ring XTR affair (with what appears to be a touchingly-humane 46-tooth bail-out cog) and an MRP upper guide.

The Di2 clickety bits are just the tip of the electronic iceberg. Batty's Fox suspension gets the same treatment. 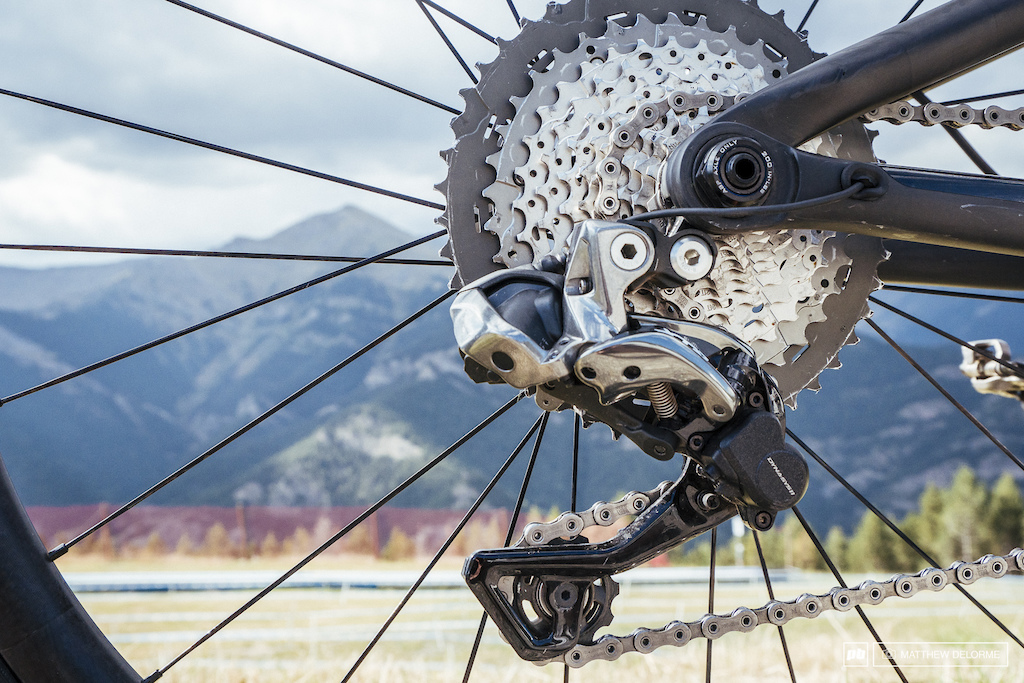 It's all electric up in here. 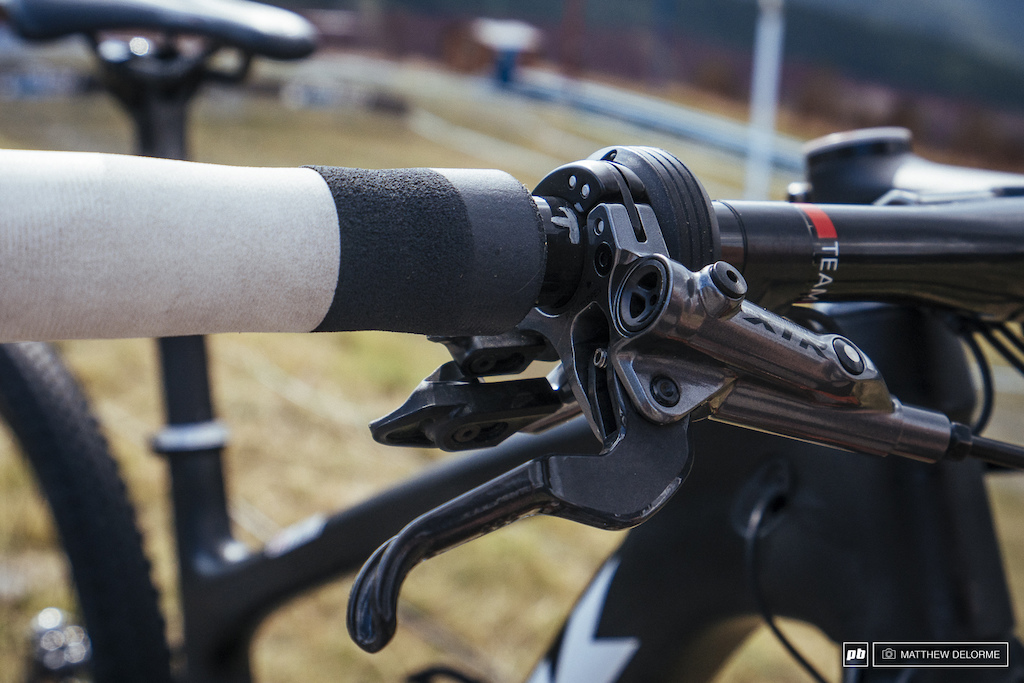 Comfort is clearly not a key priority for someone who is going to redline it at the I-can-taste-vomit level for a couple hours straight. Consider the sandpaper grips. 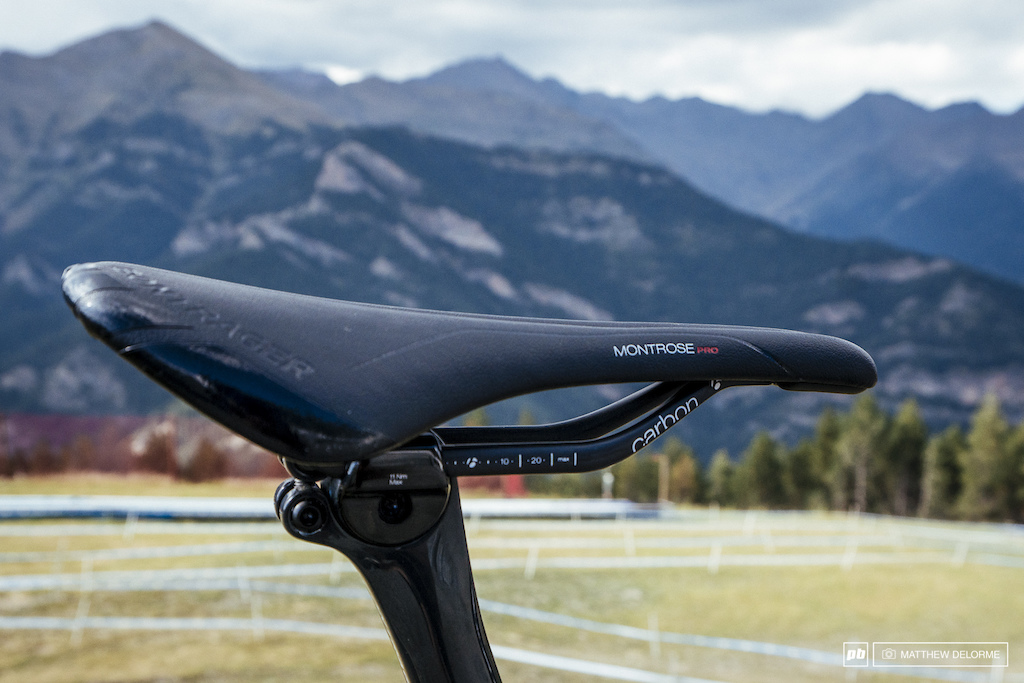 How do you spell "aggressive"? Well, you could do it the way I just did....or you could slam your padding-free saddle all the way forward and pair it with a negative rise stem. It hurts just to look at it.
Fox cleaved a half pound off their already featherlight 32 cross-country forks this spring with the introduction of the 32 Step-Cast fork. Just how light is "lightweight" now? The 27.5 version of the Step-Cast 32 weighs a claimed 1,355 grams (2.98 pounds). While the fork contains the same Float air spring as its immediate predecessor, the Step Cast's shaved down chassis deserves credit for the weight loss. Batty is using a stock Step-Cast, albeit the top-rung ($1,569) model equipped with Fox's FIT iRD electronically-activated compression damper. 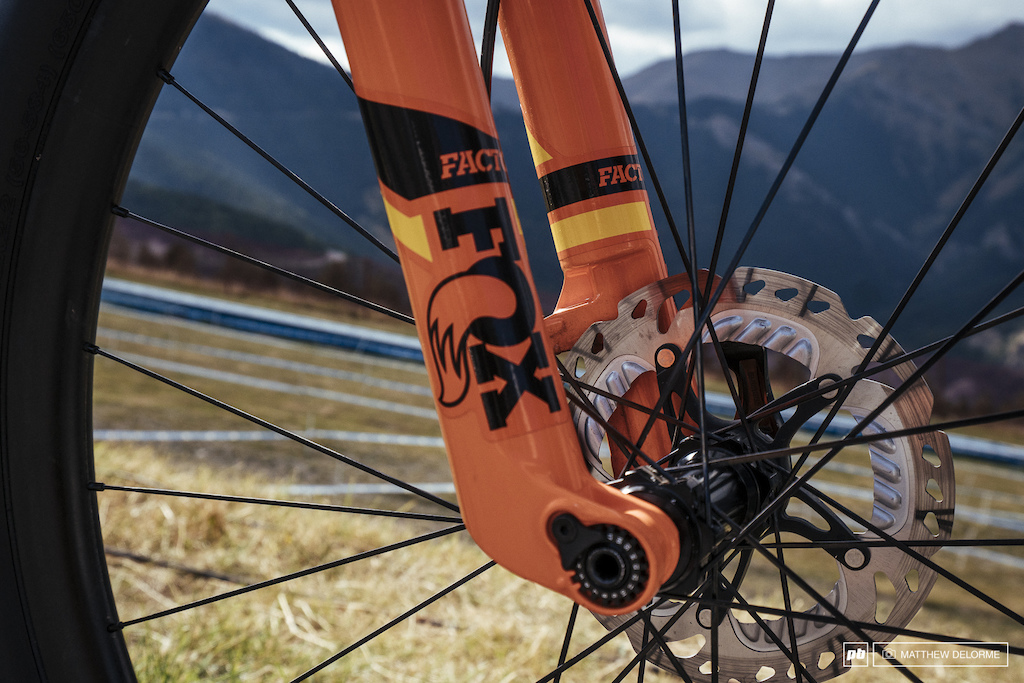 The Step-Cast 32 weighs less than three pounds and there's not a bit of carbon to be found on it. Impressive. 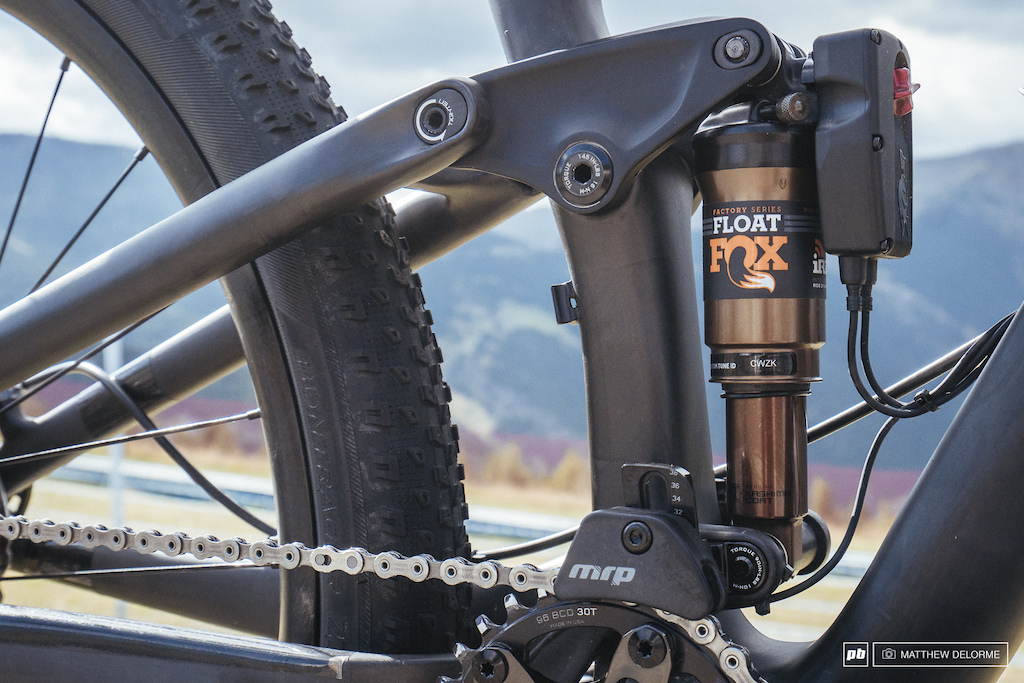 The back end of the Top Fuel is controlled with Fox's electronically-activated Float iRD shock--a single left hand remote controls the suspension.

WAKIdesigns (Sep 1, 2016 at 0:41)
I am glad they didn't do a 30 sec bike check video with her. Otherwise I'd be totally persuaded to buy the thing and this one costs more than all my bikes ever combined...

bridgermurray (Aug 31, 2016 at 20:09)
Funny. Xc riders are so weight conscious that they remove a few screws from their rotors to decrease .3 grams of rotational weight, but suddenly it's okay to run heavy electronic shifters and a battery powered shock-adjustment brick? Those guys, shm...

jaycubzz (Aug 31, 2016 at 20:59)
thats like saying "its alright to rip the interior out of a car but suddenly its okay to run heavy turbos and related cooling components?"

sometimes the sum of the parts is worth more than the parts themselves.

perhaps the electronic suspension tech gives her advantage worth more than saving a few grams?

larryssman7 (Aug 31, 2016 at 22:59)
@Ninjasstolemytv: whoosh. Shimano Centerlock rotors like the ones she's running don't use screws. Also, how often do you replace rotors mid-race?

bikegreece (Aug 31, 2016 at 23:17)
I would prefer to see Rissveds's Włoszczowska's or Pendrel's bikes that took the olympic medals.
We've seen plenty of Emily's "bikes" in the past.

The-Reverend (Aug 31, 2016 at 20:52)
Looks to me that the grips are ESI silicone ones that have 3 varying densities. Race specific grips IIRC.

WAKIdesigns (Sep 1, 2016 at 6:43)
eeeem I run XTR mechanical rear mech on XT 42t. No problems other than as with pretty much every other 11sp wide range setup - chain dropping 3 gears down when back pedalling - annoying as hell.

benviebikes (Sep 2, 2016 at 8:42)
And the tire sz and wheels detail?? What psi would she ride? No set up detail just her pretty high end parts like on every top end bike. I can see her on the podium in 4yrs!

ICAS (Aug 31, 2016 at 17:47)
Hot rig but dat saddle position....
Have to think that hurts power. Ladies always have long femurs so id imagine she'd need more setback than that. Maybe it helps keep the same outta the way more for the techy stuff? What do i know..

JMHPB (Aug 31, 2016 at 18:46)
Agreed the saddle position is ungainly and I bet the designers die a little every time they see this setup... she must be either out of the norm by A LOT or she loves some knee way in front of the pedal spindle.

Women don't have longer femurs though - this from Wikipedia: "The femur is the longest and, by most measures, the strongest bone in the human body. Its length on average is 26.74% of a person's height,[4] a ratio found in both men and women and most ethnic groups with only restricted variation."

rifu (Aug 31, 2016 at 19:37)
maybe Emily has triathlon/TT background? I can relate more to Emily's set up compared to Kulhavy's super nose down position. One of my bike got a Thomson set back seatpost in a reverse position, my riding buddies called it a Thomson set front.

nkohout (Aug 31, 2016 at 20:01)
If she has a short torso having the saddle forward would help keep her CG over the bottom bracket and forward pedal.

If you've ever seen people with looooong torsos and short legs on a road bike they are often well behind KOPS (lots of setback) just to keep their weight from being too far forward.

TheR (Aug 31, 2016 at 21:35)
I'm pretty certain riders of this level have had extensive and exact fitting sessions. Whatever the reason is, you better believe it's set up optimally for her.

ICAS (Aug 31, 2016 at 21:41)
@TheR: as others users have observably stated, the ratio leads one to believe it's set up for a hilly course. Where I could see that position boding well. It would be pretty safe to assume the set up might change based on terrain.

bogey (Aug 31, 2016 at 22:53)
That is a crazy saddle position. The nose of the saddle is farther forward than the bb! To show how odd it is - this isn't even legal in UCI time trials on pretty extreme TT bikes.

lkubica (Aug 31, 2016 at 23:24)
This is a quite normal saddle position on full-sus for people with short torso (and long legs). This is even more problematic on "modern" enduro geometry, when I need to have a too long frame just because on M-sized there is not enough ST for my legs.

bikeinbih (Sep 1, 2016 at 0:02)
I think the saddle position is optimized for climbing as not much flat sections on a world cup XCO course. If you put the bike on a 20% incline her position will be perfect. On the way down it doesn't matter and she can get behind the saddle easier.

daddydonuts (Aug 31, 2016 at 18:03)
Are those grips completely covered in sandpaper, or just that black strip?

TheOriginalTwoTone (Aug 31, 2016 at 19:10)
@vooselagina: jesus, there you go ruining a perfectly good whine with logic and fact. Shame on you.

FabioPT (Aug 31, 2016 at 19:39)
@vooselagina: I believe sospeedy was referring to the fact that this bike doesn't have the straight downtube present on the fuel ex/remedy/slash that "increases rigidity" and makes it impossible for the crown to clear it

vooselagina (Sep 1, 2016 at 9:55)
@FabioPT I misinterpreted @sospeedy 's comment as a question as to why it doesn't have the knock block. But yea, as @p0g0 said, it wasn't redesigned this year.

sospeedy (Sep 5, 2016 at 17:15)
@vooselagina: Comment was because it was puzzling that Trek didn't have knock block on their leading XC bike. XC folks always want their bikes so light and rigid, but Trek's XC bike doesn't currently have knock block (which Trek says makes the bike lighter and more rigid, even if, to me, knock block is a HUGE design compromise). But i guess Trek will use it on the next iteration of the Top Fuel. I am NOT a fan of knock block. Although i dig the new Remedy and Slash, i would take a pass because of knock block....

sospeedy (Sep 5, 2016 at 17:27)
@TheOriginalTwoTone: Ahhh, if i was whining it was because they ruined those perfectly good Fuel/Remedy/Slash models with "knock block". Trek says it is to enhance rigidity and save weight but i thought it was weird that they don't have it on the Top Fuel (where XC riders usually want the lightest and most rigid bikes). But i guess @p0g0 is right...the current Top Fuel is an older model... But in the next iteration, I am sure Trek will compromise the design on the Top Fuel just as they did on the other bikes!

stemcaps-com (Sep 1, 2016 at 13:21)
If you are talking about the apparently bolt less stem cap, then checkout StemCaps.com
Below threshold threads are hidden