A dense singletrack network around the picturesque village town of Valtesiniko (alt. 1.100m), hosted the last race of the 2019 Enduro Greek Series. The series totaled 6 events, adding one extra over 2018, which was its first year. This rough, mountainous area is located just two and a half hours by car south of Athens (210km). This highland region, whose access involved high passes and steep roads until a few years ago, has kept a vivid folklore persona that relates to nature and the people who live in it. The atmosphere at the paddocks and post-race celebrations reflected all that, with beer flowing lavishly and teasing between the mates and co-racers going on incessantly either on stage starts, by the finish line or under the team tents. 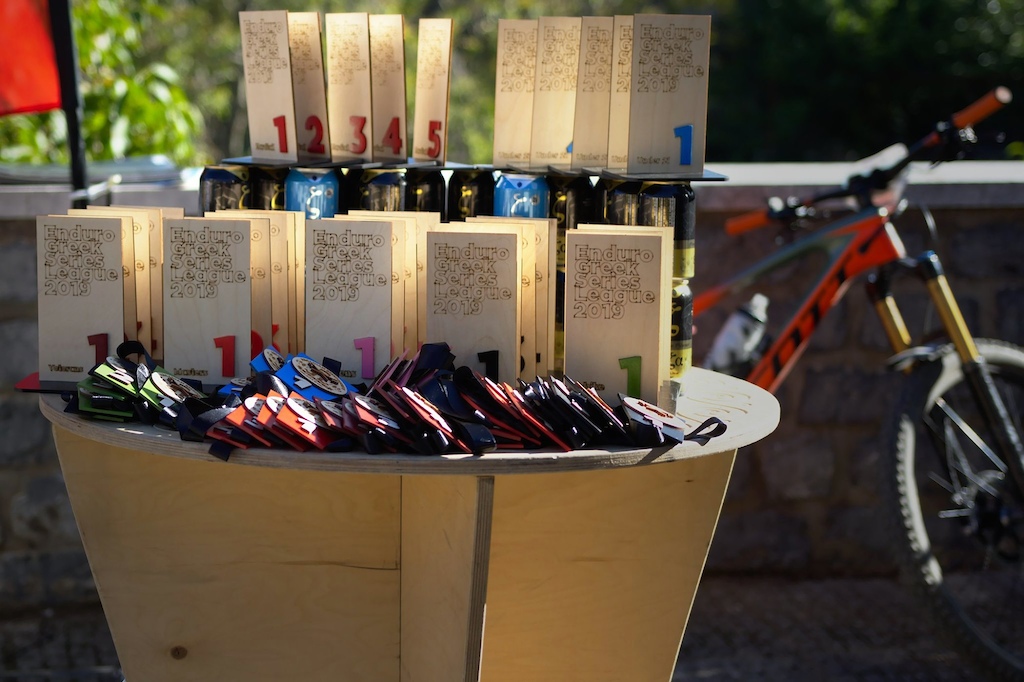 Race day kicked off with stage one, a track flowing out of a walnut orchard and cutting through some dense pine forest. It was wide, almost double-track at places, with a pedaling start that tore out your lungs for the first 300m or so but then dropped into shaped corners before straightening out again to end in a rock-infested woodland slope. 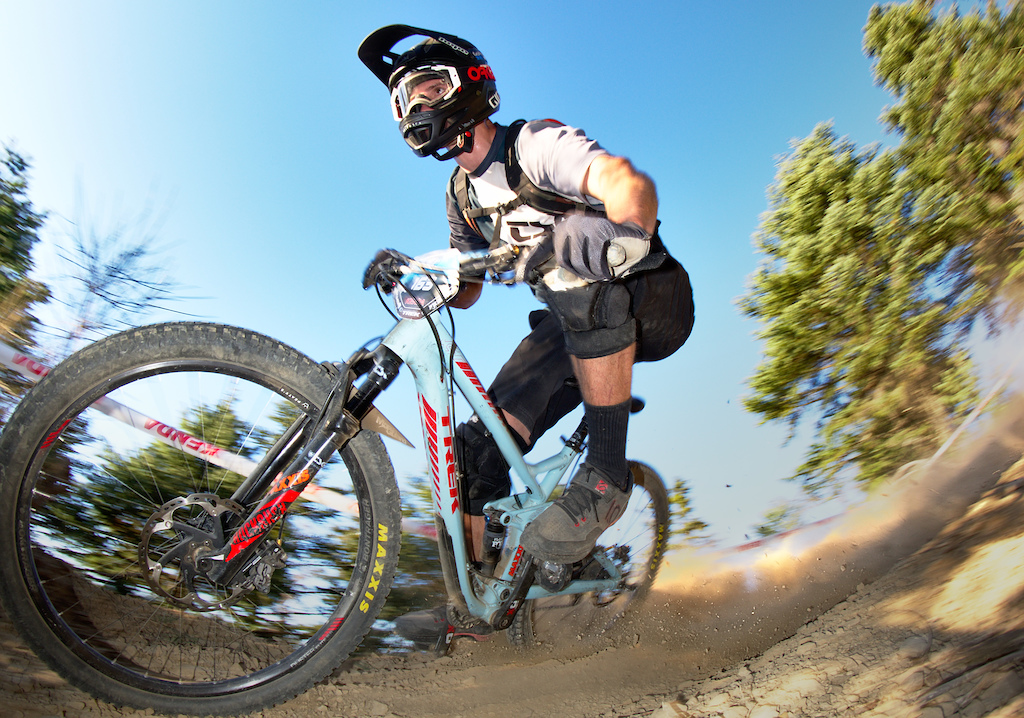 If you had the chance to wander around stage two, it would have made a very scenic hike. But racers had to settle for a head-on start, a sketchy fireroad downhill run that shifted quickly into a track cutting between old tree terraces and fields, changing sharply to a narrow line contouring a tree-shaded ridge. The trail suddenly then drops to more open, less techy terrain and a demanding top gear flowy section at full effort. 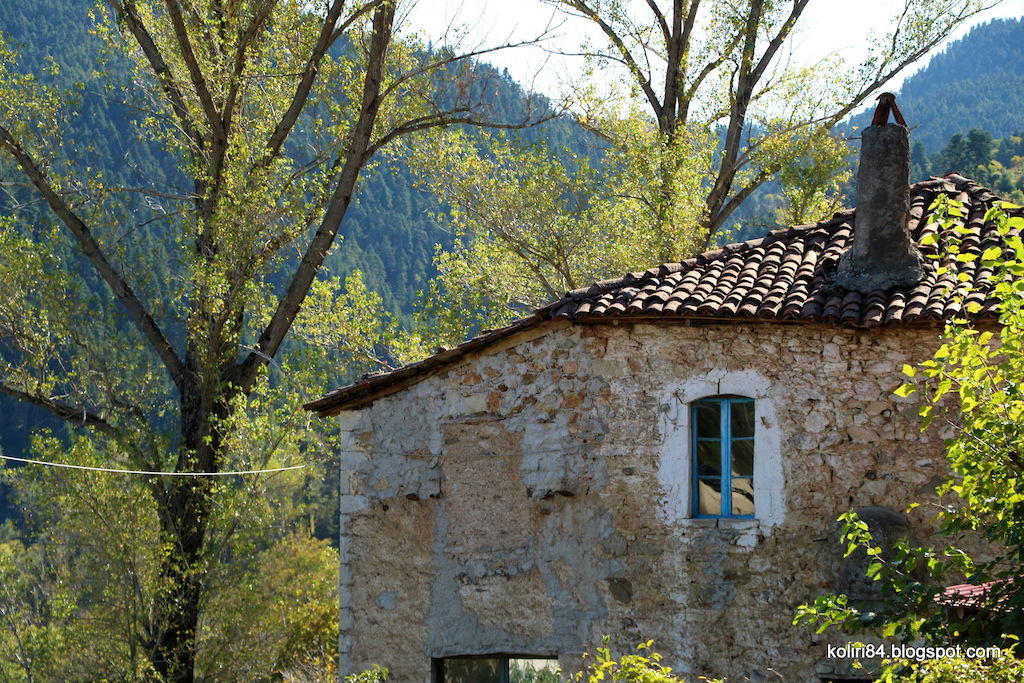 “I swear I heard a piper in that last section of stage three...” those words coming from a substance-sober but overtly euphoric rider just as he came out of the forest track. We stood there, bikes propped against the stone built watermill, catching a breath in the warm sun of late autumn. Next to the medieval building, a small bridge crossing a stream and under it, reeks swishing calmly on dry banks. The myth goes that in such a stream, the nymph named Syrinx came running barefoot to hide from the brutal advances of Pan, the goat-legged god of old. In Tom Robbin’s bestseller, “The Jitterbug Perfume”, the old god’s essence still lingers through the ages, being sensed by those with a flair for the wild. The singletrack continued to pour out dusted, weary but elated riders, amassing their wits and focusing on the final km of the day’s challenge. 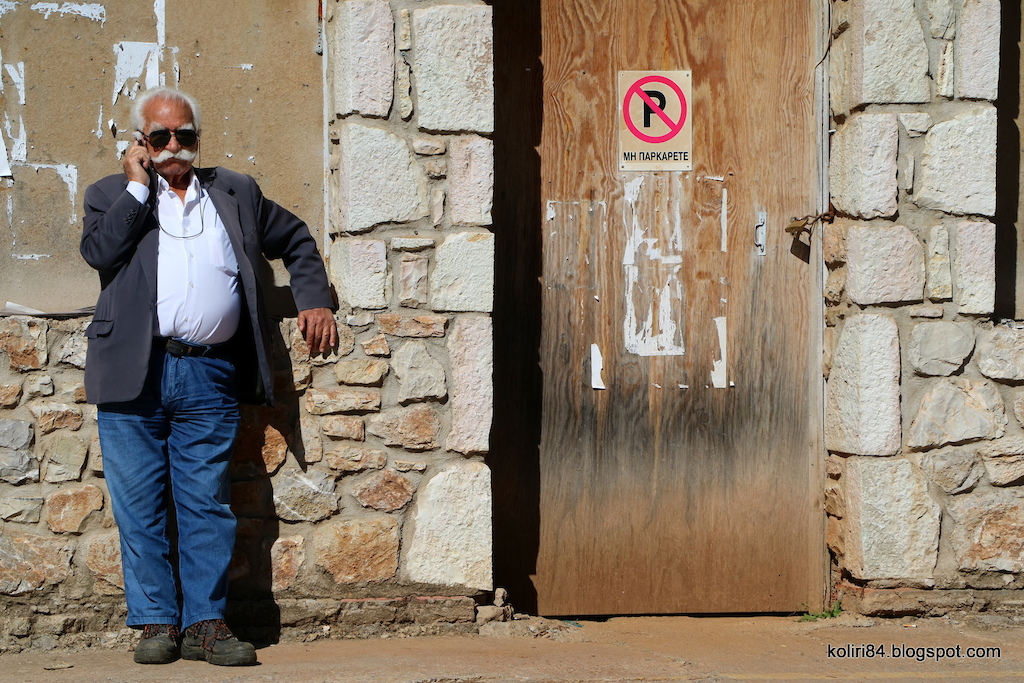 Stage three, the longest of the day (4.1km out of 10.5km total stage length), offered a varied terrain starting with a packed high-speed, tree-lined singletrack which got really skiddy at off-camber sections, open fields where you had to pedal through rock gardens and stonewall drops, while the second half got tighter switchbacks carved on drifty limestone hardpack. It started right off the top of one of the area’s highest peaks at 1,350m, where the remains of an old outpost can still be traced. From there, you can gaze all the way to the sea in the West. Big mountain territory. 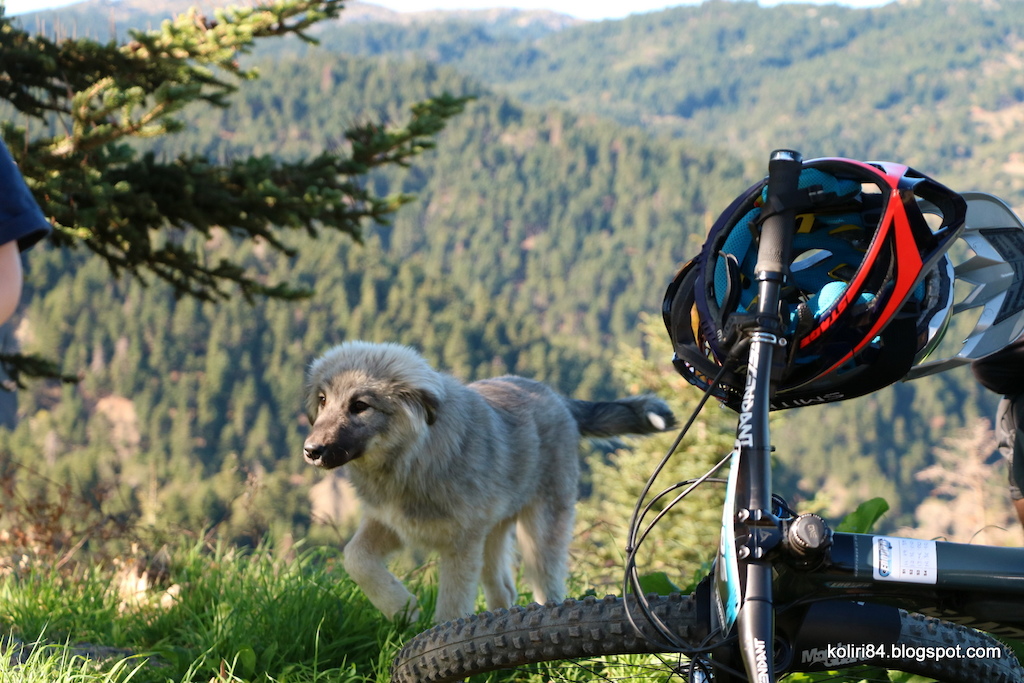 And there comes stage four. Riding through a 4.5km liaison course at the end of stage three, gaining 210m of altitude, the riders reached the starting point of the day’s last stage. But there lay a catch. Taking on the mischievous persona of Pan, the organizers opted to obscure this last trail from the previous day’s training. The blind stage was a short 1.2km run, carrying on through some dense oak bushes and sparse firs and twisting like a hurt snake along an exposed ridgeline. Racers just had a quick glimpse of what lay ahead, when a POV video was played right after the technical briefing held on the race’s eve. The lower speeds and alternating canopy of the local flora, made for a splendour of Mediterranean aromas, as the midday sun baked the fallen leaves of sage, sideritis tea and oregano, right on the abounding limestone slabs. 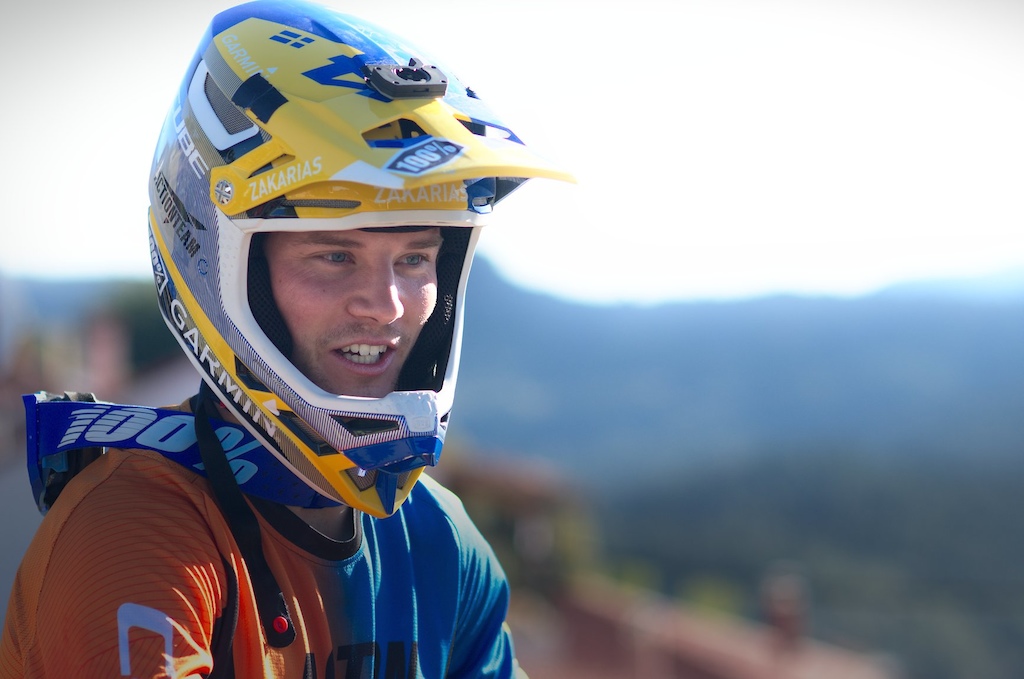 The Men-Elite category was dominated by Zakarias Johansen (Cube Action Team) with a total stages time of 15:43.29 followed by Phil Atwill (Cube Global Squad) who were the top international racers registered for the event. Phil (+0:47.84), was excited to be back racing after his wrist injury last August. He was closely chased by the EGS 2019 winner, Greg Tsalafoutas (+0:50.53) who took 2nd place at stages two & three as well as EGS score leader Elissaios Gouvis (+0:55.25) who finished 3rd and 4th respectively, in very close pursuit. Danis Karamichailidis completed the top 5 men’s podium. 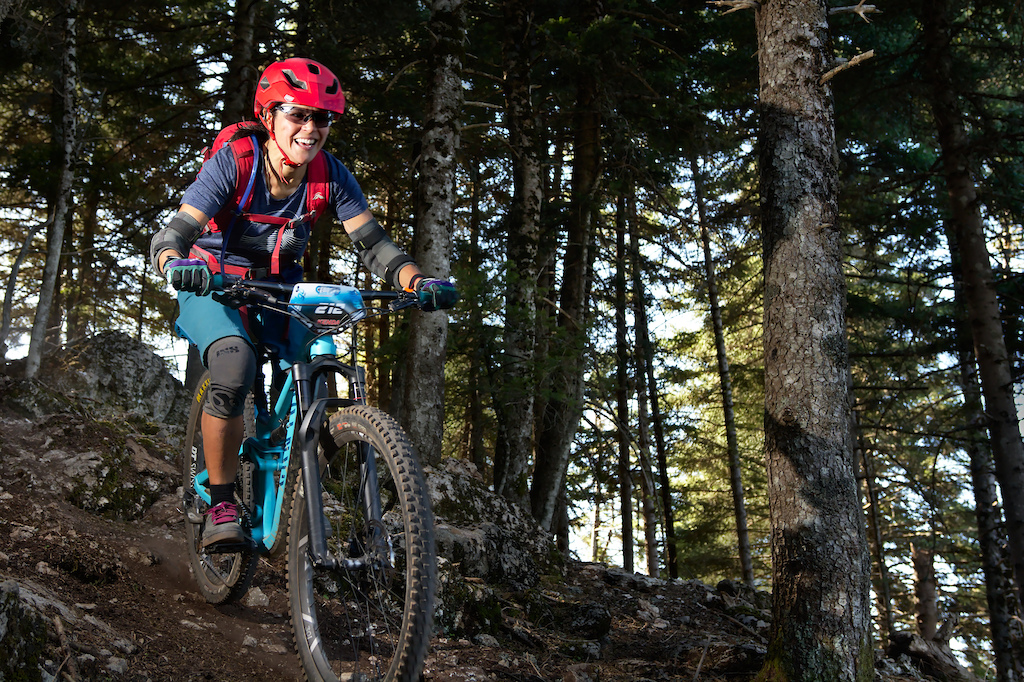 Under-21 and Veterans (46+) categories proved to be a family business and a clear win for Socratis Zotos (17:43.09) who also won the EGS 2019 series and his father Michalis (19:58.24). The very competitive Masters category (36+) was won by George Kaponis, despite his losing some precious time on Stage 1 where he finished 4th. Women provided most of the day’s thrill, with the first two girls, the race weathered Vasiliki Lazopoulou (1st) and Maria Katsarou (2nd) alternating in between splits of seconds throughout the event. It was a tricky fourth stage that cleared the win for Lazopoulou, where she managed an 11 sec head in front of Katsarou. 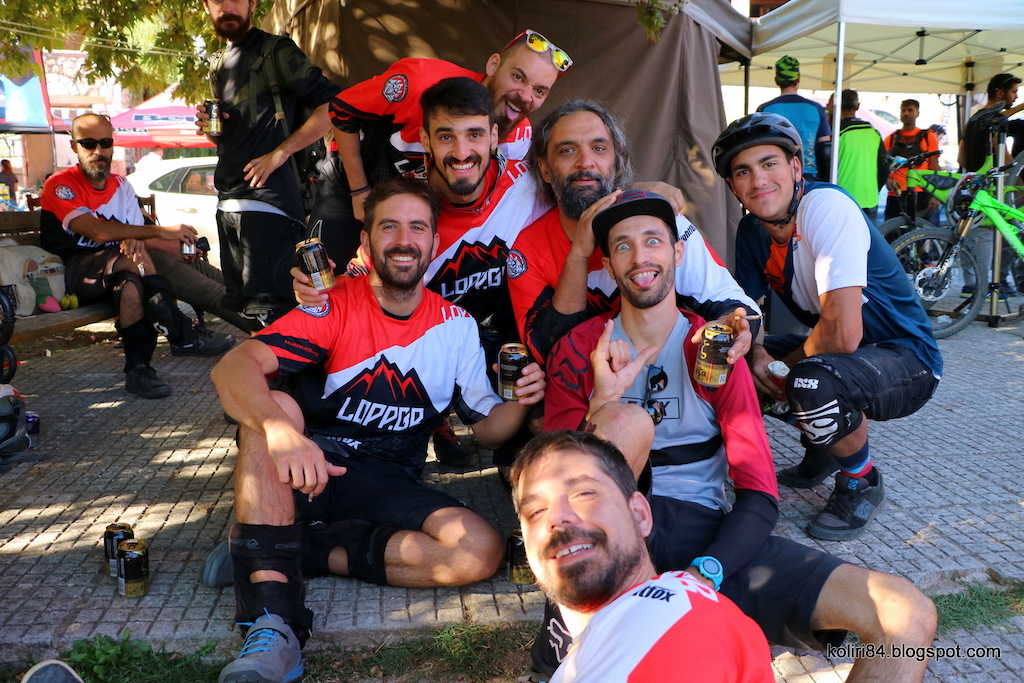 In the evolving e-bikes category, the Franco-Italian duel that lasted throughout EGS 2019 led to a clear victory for Briois Bertrand (FR) against Toninelli Alessio (IT) who was chasing close by, 2019 being his first e-bike competitive year.

haristheodoropoulos (Nov 12, 2019 at 11:10)
Pan strikes again. No better way to end the season. Enduro, beers and souvlaki in their best form