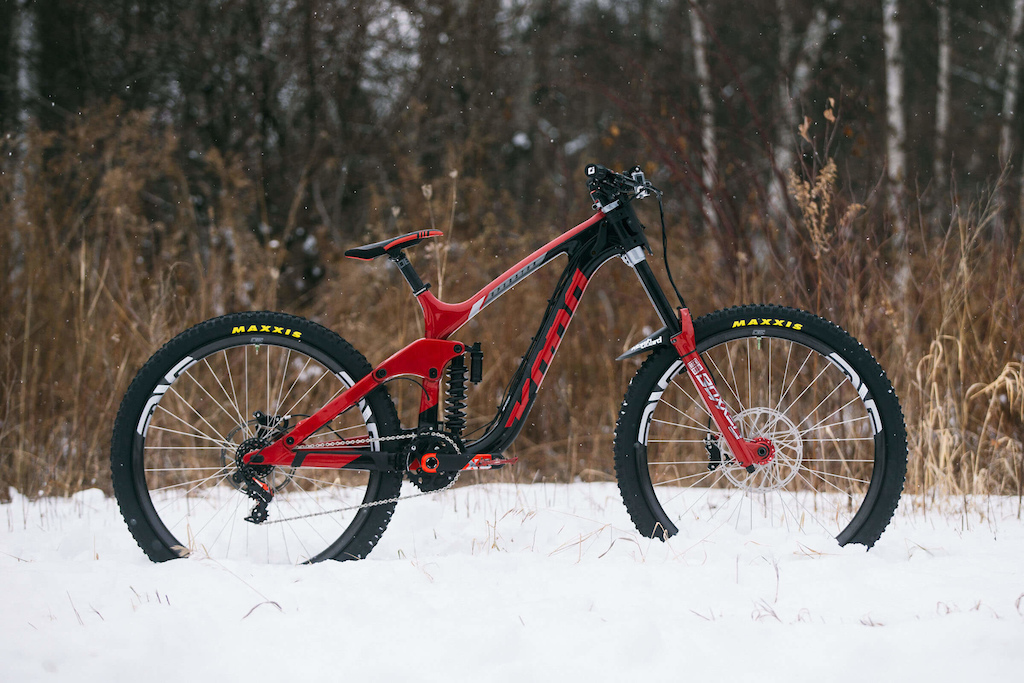 ENVE has expanded its reach in the mountain bike scene thanks to a new partnership with the Kona Gravity Team. This partnership means that team riders Connor Fearon and former World Champion Miranda Miller will compete in the World Cup downhill and Enduro World Series events equipped with ENVE M930 and M730 wheelsets.

In 2019 alone, the M930 was ridden to eight World Cup victories, in addition to a World Championship and overall World Cup title. Since entering the World Cup downhill circuit a decade ago, ENVE’s team partnerships have continued to accelerate the product development process, resulting in more World Cup downhill wins and podiums than any other carbon wheel to date. 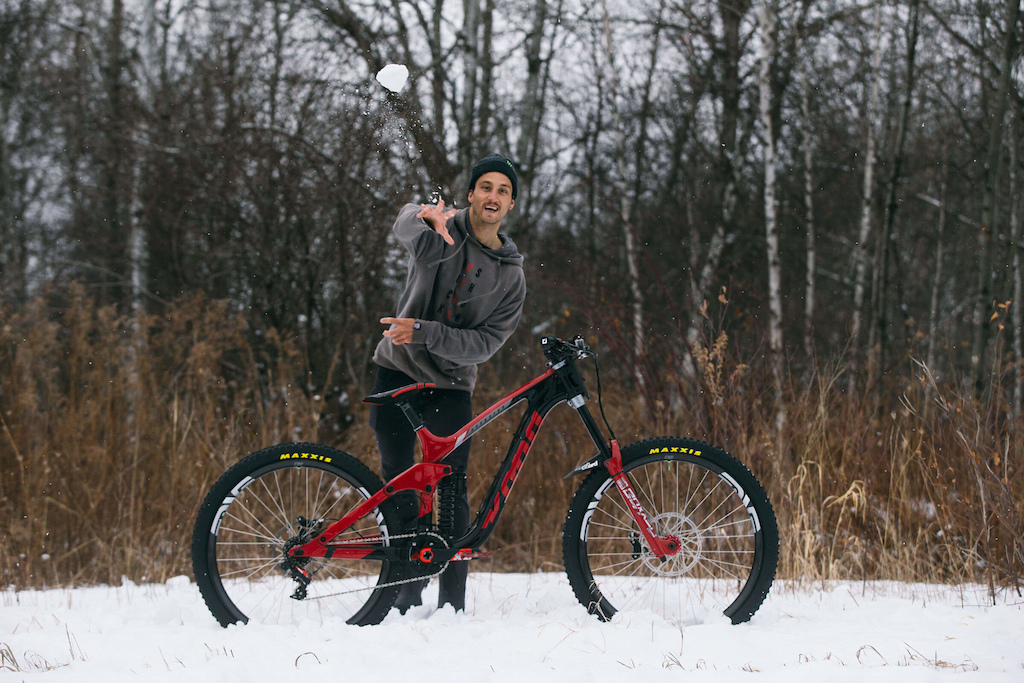 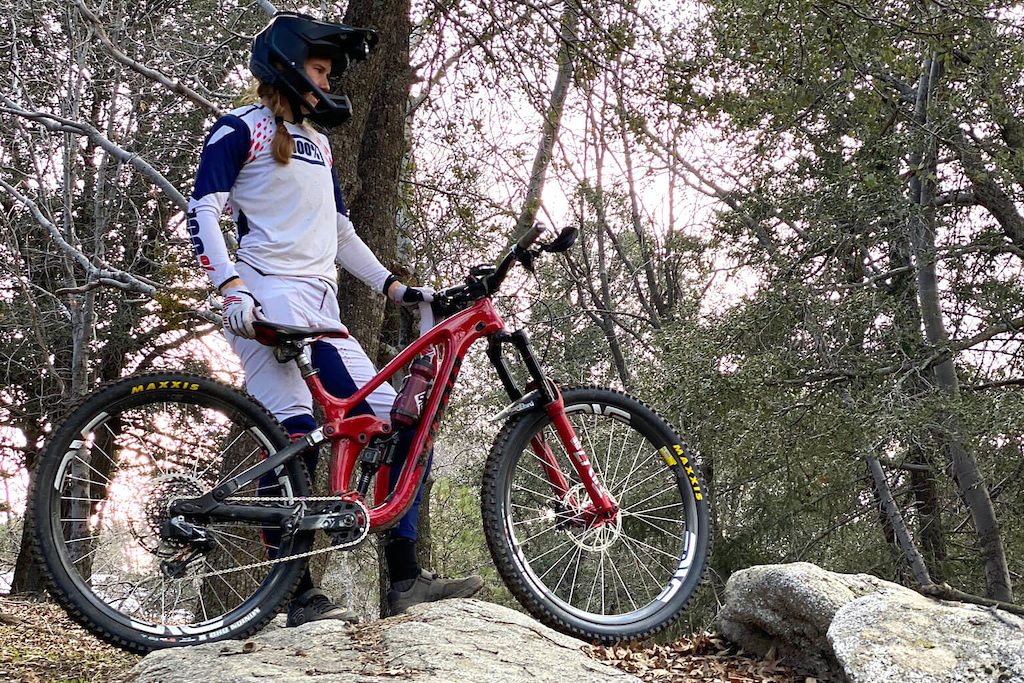 Putting the Kona Factory Team on ENVE is something that team manager Mathieu Dupelle had an eye on for some time due to a reputation for reliability and performance that travels through the World Cup race pits when mechanics and athletes talk. “There has been an appeal to form a partnership since a meeting we had in Mt Saint-Anne a couple of years ago. We had the chance to try the wheels and then we did our homework in speaking to riders that had raced on ENVE and got great feedback. It’s the performance and durability that we’ve been missing,” said Dupelle.

Now in their ninth season, the Kona Gravity Team is one of the longer-running programs on the circuit. “Having the opportunity to work with such a storied program capable of achieving so much success in both downhill and enduro is something that doesn’t come along very often. Our current rim technology comes from direct partnerships such as this, so working with Kona Gravity Team and delivering products that are currently winning World Cups is an exciting opportunity,” said ENVE’s Neil Shirley. 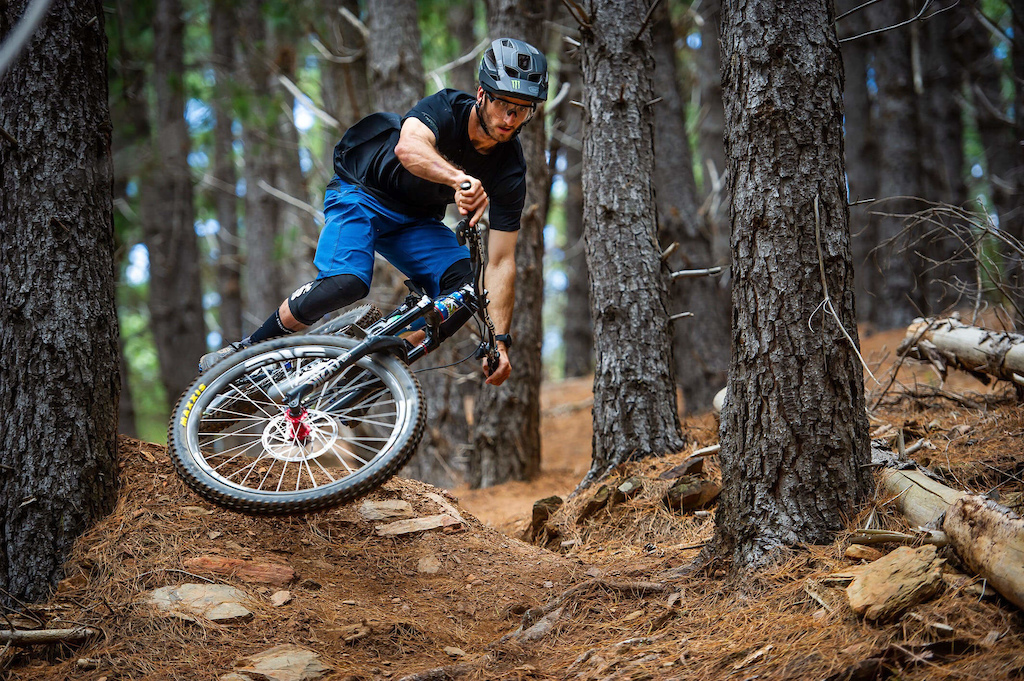 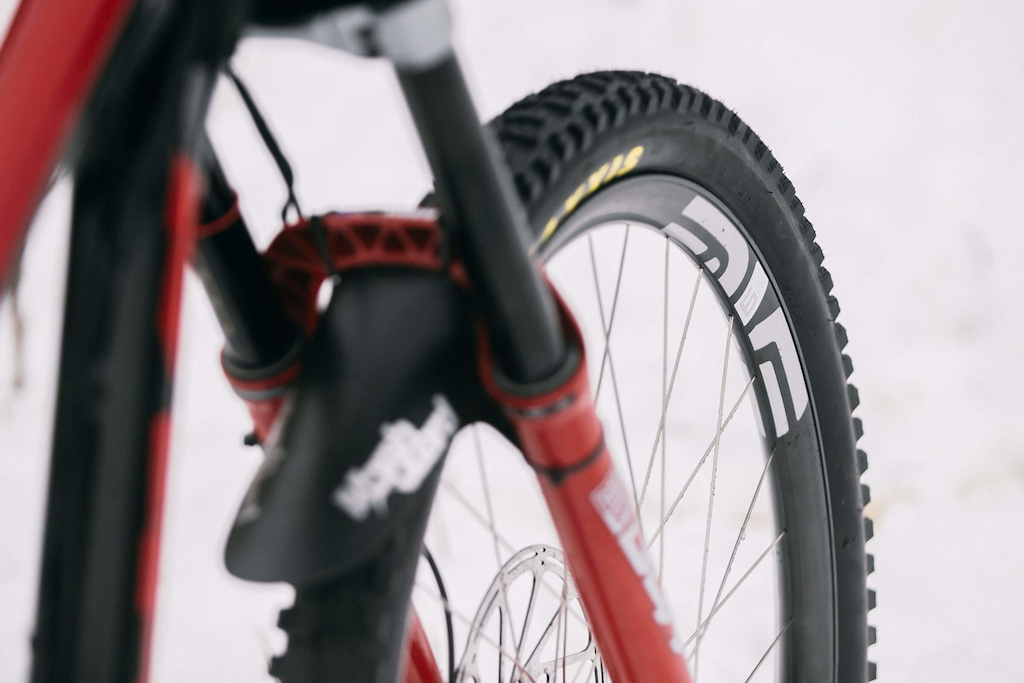 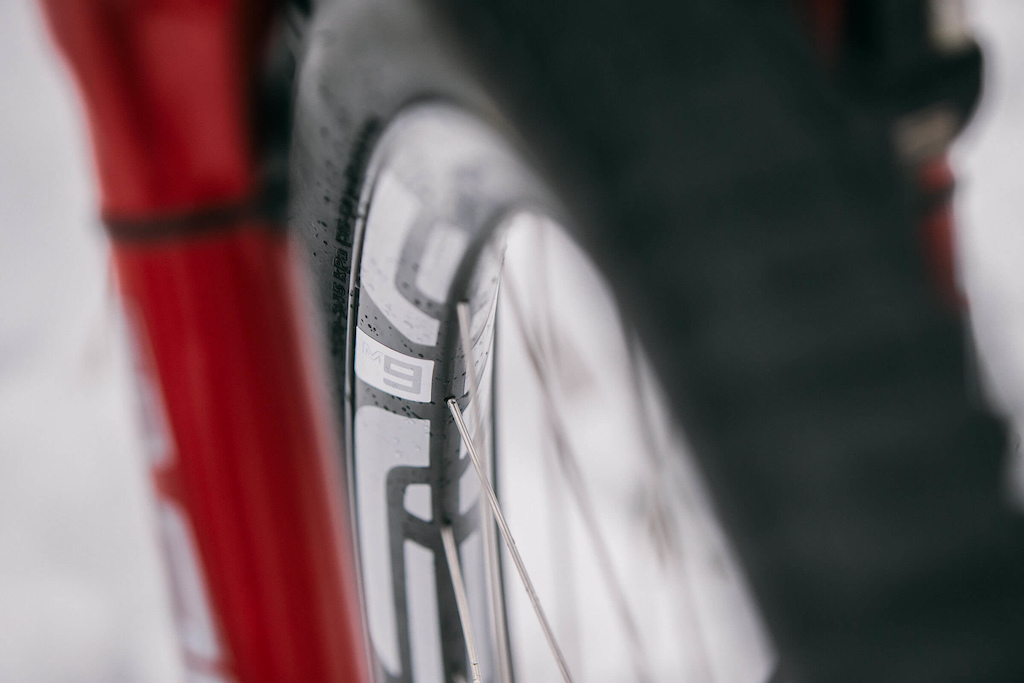 For 2020, the Kona Gravity Team had plans to tackle a massive schedule that encompassed the World Cup downhill series and potentially every round of the EWS. With the start of the season postponed and a number of races being rescheduled later in the year, the team will be going full throttle through the end of the summer. “In past years we would have taken a more conservative approach to the schedule, but Miranda wants to do more enduro and Connor wants to do everything. He really enjoys downhill racing, but likes riding enduro because he’s on his bike all week, which is what he loves to do”, said Dupelle.

Be sure to follow the Kona Gravity Team throughout the 2020 season.

WAKIdesigns (Mar 23, 2020 at 5:17) (Below Threshold)
@sewer-rat: Enve shouldn't have much issues. Only the plebeic wannabies who spend 6 months worth of their salaries to affordan Enve rim will abstain from buying anything from these snake oil sellers. Regular clients, that's posh folks will keep buying. I wonder how much of Enve clientelle is Triathletes...

DHhack (Mar 23, 2020 at 7:03)
@WAKIdesigns: around here the money crowd is all on Santa Cruz or S-WORKS running the stock carbon wheels or i9 matching the highlight color of the frame. A few of them are legit fast guys, the rest sure do have clean bikes before every ride...

WAKIdesigns (Mar 23, 2020 at 8:14)
@DHhack: Being around bike shops I do see all sorts of clients. You can see on big portion of folks owning super bikes it's pennies for them anyways. Especially roadies and triathletes. When a bloke stops by in a toned down yet latest Audio S6, 10yr old on the passenger seat with latest IPhone, you do a quick scan of his clothes, company badge, you know that proportionally income/bike expenditure, he spends less on his SHIV than most Canyon owners on their Strives. So this is what I mean... that's it's hard to beleive that boutique brands will lose too much money on all this. It seems it's companies like Commencal that will take a blow.

WAKIdesigns (Mar 23, 2020 at 8:55)
@glen-allaire: how come am I jelaous?! I just said for most folks buying tip top bikes on Enves it's like buying a Canyon for the rest? How's that negative? I even own an Antidote so don't have a tiniest reason to be jelaous of anything else than Eewing cranks. And bless those who have them.

ATXZJ (Mar 23, 2020 at 17:32)
Since I got into MTB I had always lusted after ENVE wheels and after a few years I had the opportunity to buy a set of highly discounted M70/30HV 29er wheels with DT240 hubs. All the best stuff. I weighed my old stans flow EX and Enve wheels and found the enve saved me 180 grams F&R combined over the stans. Okay, they're 4mm wider. On the first ride i found they rode really, really harsh compared to my aluminum wheels necessitating a complete rethinking of my suspension and tire pressure settings. Also want to mention sealing them up is a TOTAL PITA with the ridiculous enve/gorilla tape that refuses to stick to the wheel no matter how much prep you do. I had to do two full wraps of thick assed tape and then leave it for a couple days with a tire and tube inflated to 50psi forcing the tape to the rim. THEN you have to remove the tube without damaging the tape you just waited for two days for it to finally f@cking stick. In the end I found some rim strips that solved the tape issue and got the suspension and tire pressure dialed in. Would I do it over again? Oh god no. I'll be on DT swiss aluminum moving forward.

P.S. I am not a dentist. I am blue collar, work outside (worked, thanks covid), have a family, kid in college, mortgage etc and didn't put any of my bikes or gear on a credit card.

WAKIdesigns (Mar 23, 2020 at 23:47)
@ATXZJ: ugh wow... that’s a first thing I read like that. We need more people to come out. I have same experience every time I ride carbon rims. Owned LBs, harsh as hell, sold them before they would crack.

ATXZJ (Mar 24, 2020 at 11:40)
@WAKIdesigns: Thanks. Every time someone mentions my wheels on the trail I tell them about my experiences. I essentially paid almost $2k for stickers.

nyhc00 (Mar 23, 2020 at 4:02)
i stocked up on popcorn initially prepping for online drama...in hindsight i should have gotten more toilet paper first.

frenchlinesandfrenchfries (Mar 23, 2020 at 8:38)
How many people talking shit on Enve have actually ridden them and not just basing their judgment on a negative Pinkbike review? Just curious here... I have ridden Enve wheels for a few years now and have not had any issues. I can't say that for the other brands I rode prior to Enve...

sherbet Plus (Mar 23, 2020 at 9:36)
Have sold a fair few of them. The amoubt of epoxy gaps, poor fibre layup, and general low quality has kept me off of wanting them.

Because thats how much more they cost.

frenchlinesandfrenchfries (Mar 23, 2020 at 10:03)
@reverend27: I have not ridden We Are One so can't compare. I love the ride quality out of the M730 and the rim strip, in my opinion, is a much better option than aftermarket tire inserts... No more pinch-flat, easy to change tires, easy to inflate, no leaks, way lighter than inserts...

covekid (Mar 23, 2020 at 20:55)
Yup. Heard the same (along with other races). Not sure Enve will be better but heard the Commencal team did pretty well with them.

bretttippie Plus (Mar 23, 2020 at 18:59)
I love my Enve's!! I'm 218lbs and not the smoothest rider in the world and I like to ride a lot of tech descending! Since I got the new Enve rim strip I have not even had a pinch flat in 1.5 years...and that's riding the north shore, Squamish, Pemberton, Kamloops, Sun Peaks Bike Park, New Zealand, Lake Garda, Innsbruck, Peru, Chile, Dolomites, Panorama Bike Park, Big White Bike Park, Mt. Washington Bike Park, BC Bike Race, Retallack, Kicking Horse Bike Park, Canmore, and the Whistler Bike Park. Unbelievable...but it's happening. I still carry a tube, patch kit, pump and tire levers everywhere I go...but it's always for other people it seems now. Stoked!!

BoneDog (Mar 23, 2020 at 6:51)
I didn't catch that but definitely what the f*ck? Think its on purpose or just photo-shoot missing bits

slimjimihendrix (Mar 23, 2020 at 9:52)
Could be that he was running a bigger front rotor on his actual wheels and then they switched to these with a smaller rotor for the photos.

wilbersk (Mar 23, 2020 at 8:04)
Kind of funny to me all the ENVE hate on here. The top riders in the WC dominated on them last year, and they have no question asked wheel replacement now.

I’ll still be buying We Are One or Santa Cruz reserves, but acting like ENVE’s aren’t top notch is just dumb.

In the event of a broken spoke, you remove the tire, the strip and et voila... (takes about 2mn) Not having to deal with removing tape and having to re-tape is a plus in my book...

When you break a spoke, in my experience, they break at the nipple so with "regular" rims, you would have to remove the tape to change a spoke and we all now how painful dealing with sealant and tape is... Plus the strip makes inflating and sitting the tires wayyy easier! Just my 0.2 from personal experience...

IstreetSandRooster (Mar 23, 2020 at 10:27)
Anyone see brendog at rampage case the canyon gap? Funny how his wheels were fine but his frame wasn’t...

Howieday91 (Mar 23, 2020 at 10:33)
brendan fairclough did an interview on Gmbn about his e bike. I think brendan rides just.... a tad.. bit harder than Mr. Ashton, and the wheels have been just fine with him. Said he only broke 2 wheels during last years race season, when he normally breaks 20+ wheels. Pinkbike should do an interview with Kona on Who approached who on this deal.

CFR94 (Mar 23, 2020 at 4:40)
Looks like Miranda is running an operator(ish) rear triangle with and adjustable CS length on her process now. I was wanting to play with this when I had my process.

Highgearcyclery (Mar 23, 2020 at 15:09)
His mechanic must me social distancing and he picked the wrong front brake adapter on all by himself.

KolaPanda (Mar 23, 2020 at 17:11)
surprised nobody is going to mention they put the wrong size rotor on the front lol

beeboo (Mar 28, 2020 at 11:19)
Great to see this partnership. Hopefully these two can put the wheels to good use soon. This Coronavirus really sucks

highlandworrior (Mar 24, 2020 at 16:20)
Over priced wheels on over priced shitty old out of date frames, fuck Kona they ain't done a good bike in well over 10 years
Post a Comment