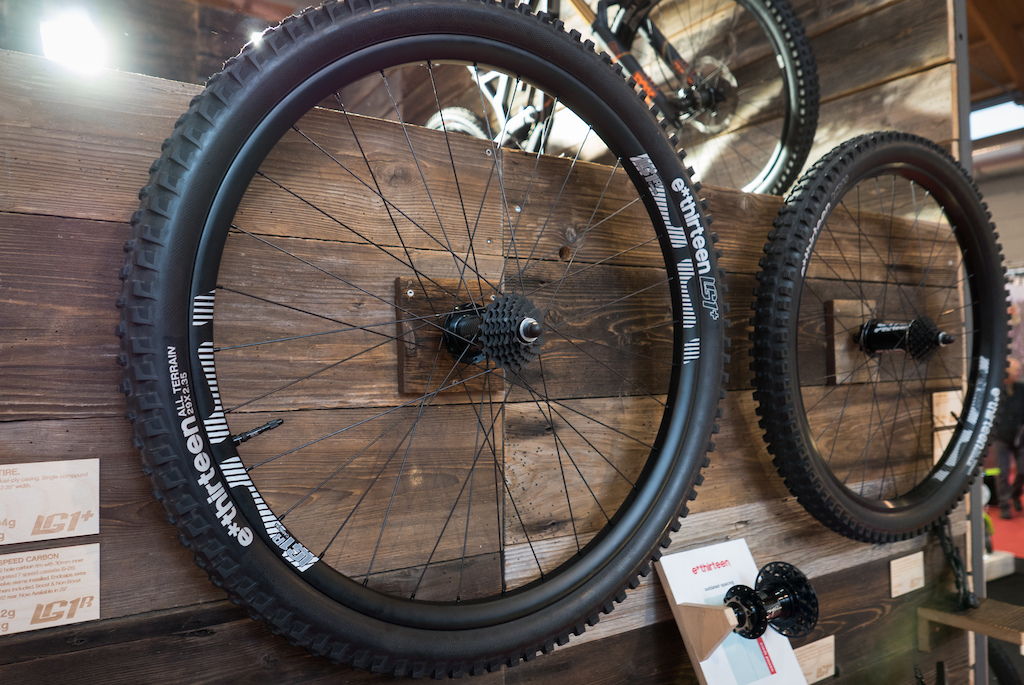 We might not have seen a wholesale switch to 29ers on the World Cup DH circuit this year, but I'd be willing to bet that there will be even more pros on big wheelers by the time next season rolls around. Apparently e*thirteen think so too – they have a 29” version of their LG1 Race wheelset on the way. The hookless carbon rims have a 30mm internal width, and are laced to e*thirteen's LG1 Race hub. That hub has been designed around a 7-speed, 9-21 tooth cassette, with the hub flanges pushed out as much as possible in order to increase the wheel's stiffness – there's no wasted space between the largest cassette cog and the spokes. 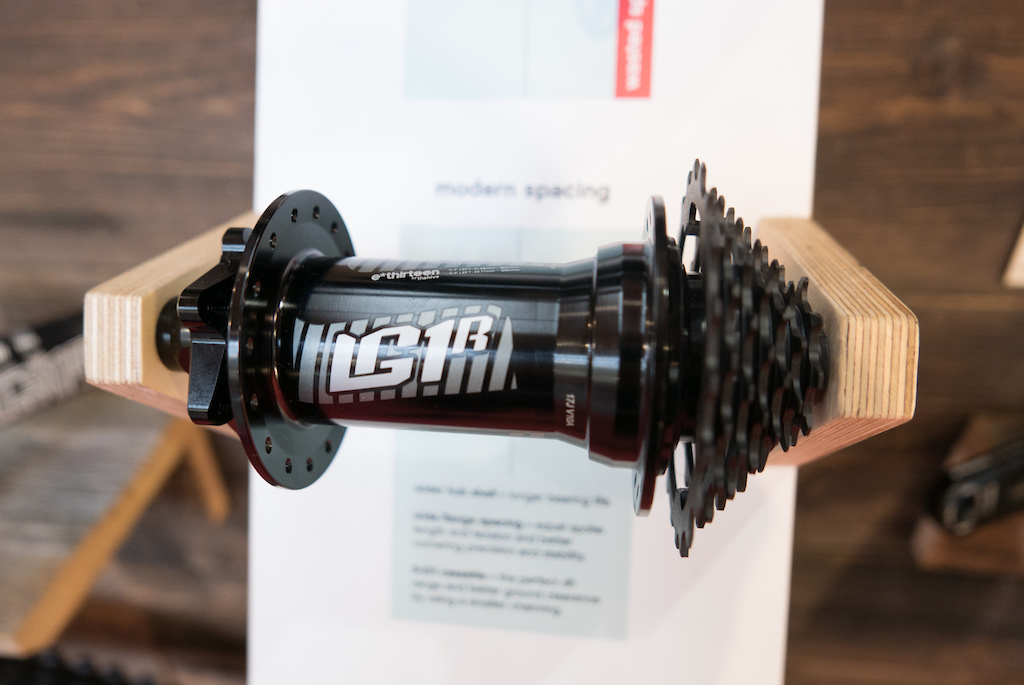 The LG1 Race hub was designed around a 9-21 tooth cassette. 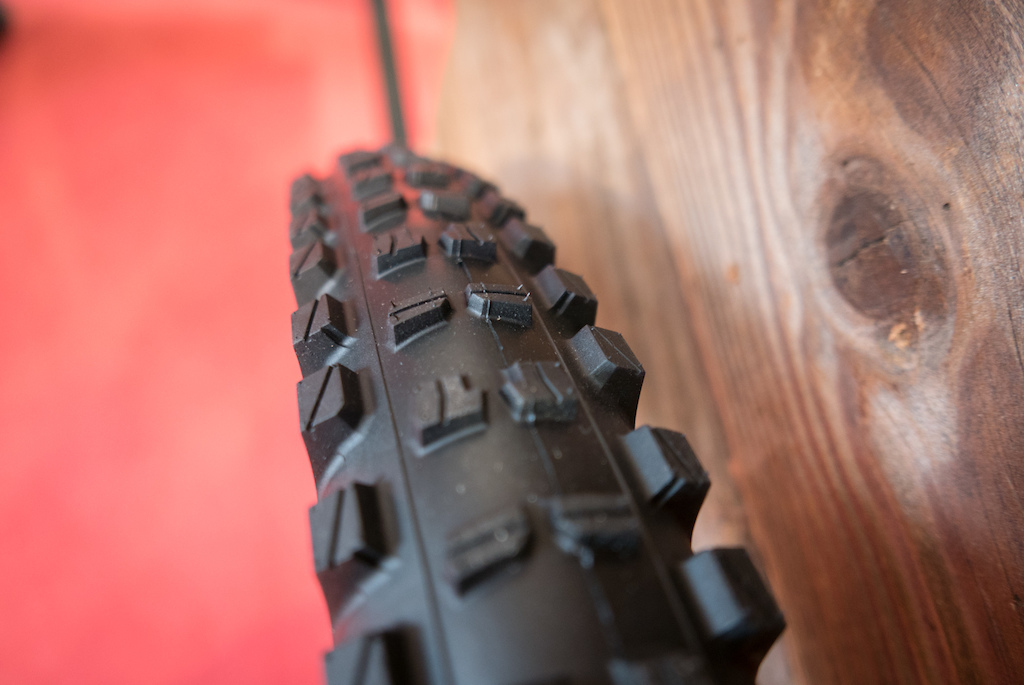 The super grippy LG1 tires will now be available in a dual ply casing.
To go along with those 29” wheel, e*thirteen have DH casing LG1 tires on the way, with a claimed weight of 1131 grams. There's also a 27.5” version as well that's said to weigh in at 1080 grams. 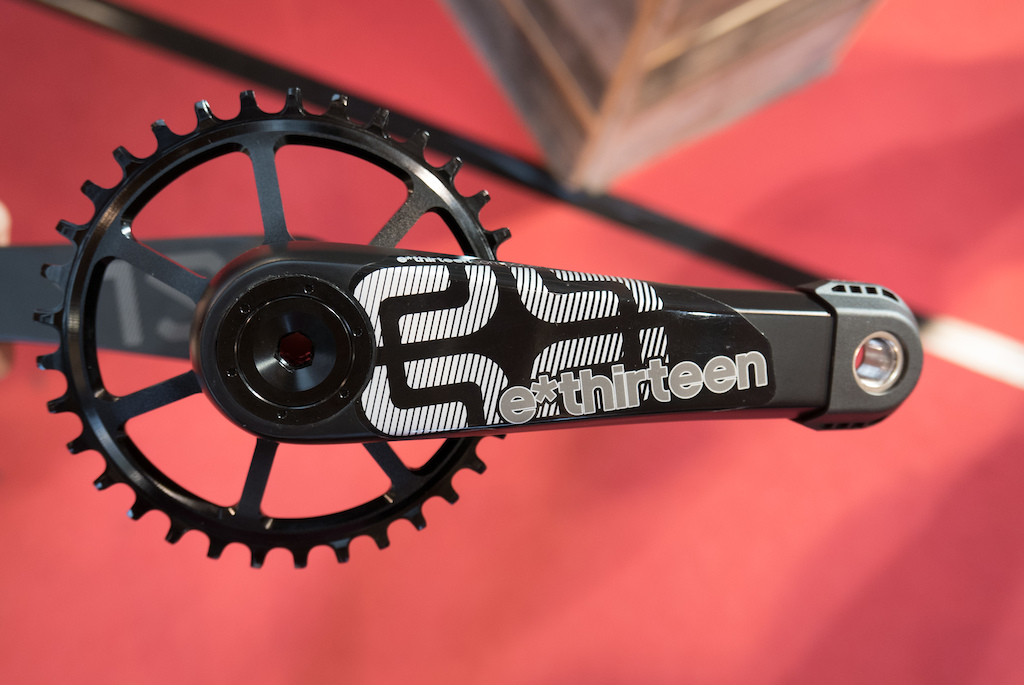 The TRS Race SL carbon cranks.
In addition to the new wheels and tires, e*thirteen were showing off their TRS Race SL crankset. Constructed from compression molded carbon fiber, the cranks are claimed to weigh only 418 grams for the 175mm version – that's an impressive figure, especially since they're designed to be able to withstand the rigors of all-mountain riding or enduro racing. Spacers can be used to fine tune the chainring position, a handy feature that allows the same chainring to work well with Boost and non-Boost drivetrains.

First this LG, TRS thing is hard to understand, then you need to pay attention if it has a + or a R for Race behind it ...

jaycubzz (Sep 1, 2017 at 10:44)
@seraph: sram is mostly sequential though, you only have remember the difference between NX and GX, the rest are mostly logical.

tremeer023 (Sep 1, 2017 at 10:40)
@WAKIdesigns: some complex physics involved i'm sure but excited to see how far it could be pushed. Reviews of the Trek Stache make an interesting read.

it's a really cool bike (unlike Fatbikes for regular riding), a very practical one for areas where winter and spring mud makes some trails barely rideable. However 275+ is just as good. With plus it's more about tyre width and volume than diameter. Contact patch for grip and staying on top of mud crap, "softmess" for roll over. I can only assume that the difference can be noticed only between 26+ and 29+

Dustfarter (Sep 1, 2017 at 9:00)
@Jackson900: I'd rather go back to watching all of them racing on modified beach cruisers with a coaster brake. f*ck progression.

Rastis1 (Sep 1, 2017 at 9:33)
I wouldn't be surprised since they will have time to test. You don't see the broken Enve wheels highly publicized that Minnaar seems to be destroying with his speed. Gwin already destroys tires, what's going to happen when he goes 29er? This year's world cup was super entertaining, but weather and mechanics made for the big swings. Hope for Gwin's sake these are strong.

adrennan (Sep 1, 2017 at 10:10)
I would really like to see it where 29er is offered on xl frames and maybe an option on large because i am very much under the impression it is a matter of fit. minaar is a giant so 29 works for him. brosnan is tiny so i dont expect him to excel on 29

rewob (Sep 1, 2017 at 14:28)
@jewpowered: I'm always surprised my more mild comments are usually hiveminded down to negatives here. It seems to you have to be extremely negative with memes to please the keyboard enduroers

Stanley-w (Sep 1, 2017 at 8:19)
Another example of making a better brace angle without a frigging new standard. E13 is a pretty innovative brand, I just hope their quality control has better consistency.

WAKIdesigns (Sep 1, 2017 at 10:25)
Yes. Spec did that with DT when Sam Hill was on the team. Now I wish someone made a 6-7speed wide range cassette in 11 speed spacing to make a narrower freehub. My worry is, Shimano may throw a big beige jobby into the fan and make a new wider FH body for 12 speed

2bigwheels (Sep 1, 2017 at 8:43)
This is all going to be far more interesting if we catch glimpses of Gwin on these wheels through the off season on his trail bike first... I just can't see YT not willing to build a Tues in a 29er format for Gwin just to see what he thinks of it. You arguably have the greatest test pilot when it comes to his f*cking Rain Man abiltiy to notice the most subtle issues with any part on a bike or even the bike itself for that matter.


I could easily see Gwin running two bikes with different wheel sizes next year. Why not right?

haallinson (Sep 1, 2017 at 8:52)
Gwin has said in lots of interviews that he prefers to find one more general set up and stick with that for the year only making small changes when he needs to. So I highly doubt he would go swapping wheel size between different races.

Its not just as simple as a wheel size change. The bike in a whole is a different pony with its own attitude compared to a 27.5

For instance what was it? Like 3 years ago they were in South Africa and the track was very tame and didn't he run a over forked Enduro? Imagine if he had a big wheel bike then shit son he might have gone fast enough to travel in time.

That sounds absurdly light for a 29" DH casing tire doesn't it?

The durability is not much in consideration for the sponsored riders. I guess they put a new one for the race run and ride it until the next one...

Jesse221 (Sep 2, 2017 at 12:11)
I'm more curious where DH is going with tires. You have all the AM/Enduro stuff going wider rims with "WT" type tires yet looking at current DH bike offering like the v10 as an example it still specs with a 28mm internal width rim no reserve 30 option and maxxis doesn't even offer any DH casing tires in a WT option. Seems DH is getting left a bit behind in recent tire/rim developments.

brcz (Sep 1, 2017 at 10:12)
I want to see metric chains!
The chainlinks will be shorter. Now, the distance between two chainpins is 0.5 inch, which is 12.7 mm. If we shorten this distance to 10 mm, than we can introduce more tooth, which results to less polygon effect = more efficiency. In the diameter of a 9 tooth normal chainring this would be a big improvement.
The chain width should not change.

usa-dh-racing (Sep 1, 2017 at 10:49)
about ethirteen 11 speed cassettes. The only thing i don't like about the 11 speed cassette is that it requires globs of grease to attach the cassette pieces. This extra grease attracts a tremendous amount of dirt in a vital area that needs to be as clean as possible.

ibishreddin (Sep 1, 2017 at 12:01)
Wouldn't you want some weight near the bottom bracket on dh to offset the ratio of sprung to unsprung weight and lower center of gravity?

Since when did they have LG1 tires?