Emil Johansson dominated once again as the Swede had the 18 remaining riders compete for silver at the inaugural Red Bull Copenride in Copenhagen. A weekend that proved the importance of coming together.

It was finally go-time  again. The world's best mountain bike slopestyle riders had flown in from all over  the world to compete in what looked to be an epic resurrection  of competing in front of a live audience.

Amongst the staggered rider line up were some of the sports’ icons like Szymon Godziek who hasn’t been competing on the FMB World Tour for a long time. Then Nicholi Rogatkin, the only Crankworx Triple Crown champion, the slopestyle and YouTube legend Sam Pilgrim and of course the current world’s best slopestyle rider Emil Johansson. 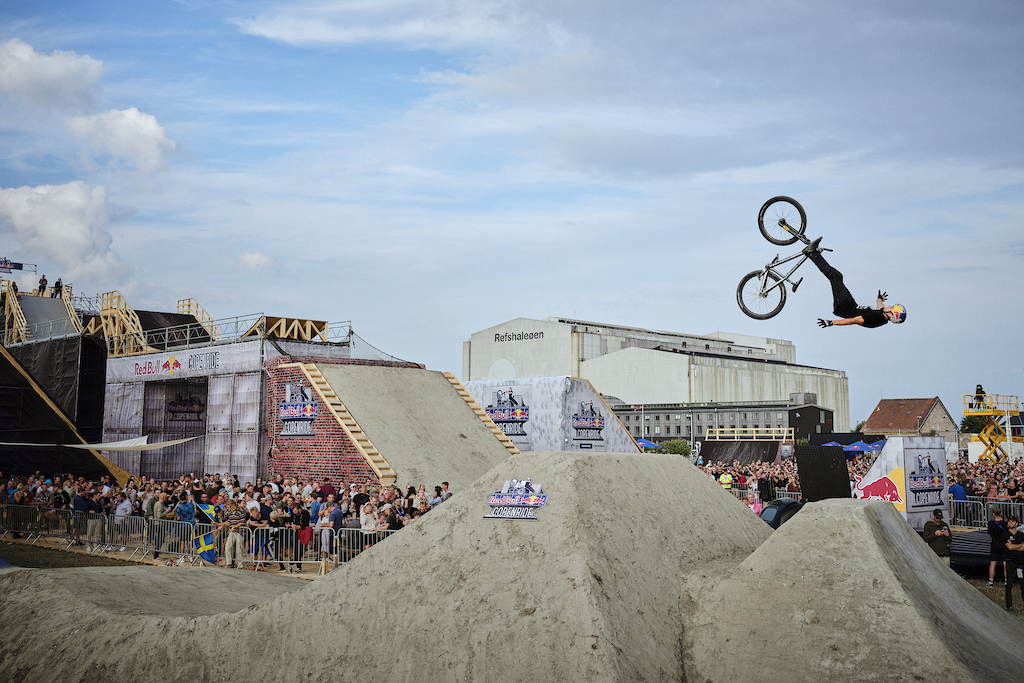 The course was like nothing we had ever seen before, and the riders were stoked to conquer the majestic scaffolding at Refshaleøen in the very center of Copenhagen.

But unpredictable weather saw the competition change. What was meant to be a two-day slopestyle extravaganza attracting thousands of spectators was minutes from being called off. But riders, marshalls and organizers came together and pulled together an event that had the riders screaming, they couldn't wait to come back next  year.

Friday was all about qualifications for Saturday's final. Gusts of wind shook some of the riders, and they clearly had a difficult time putting together the run they planned for. But as the riders went for their second run of the day, they seemed to have adapted to the ever-changing conditions. 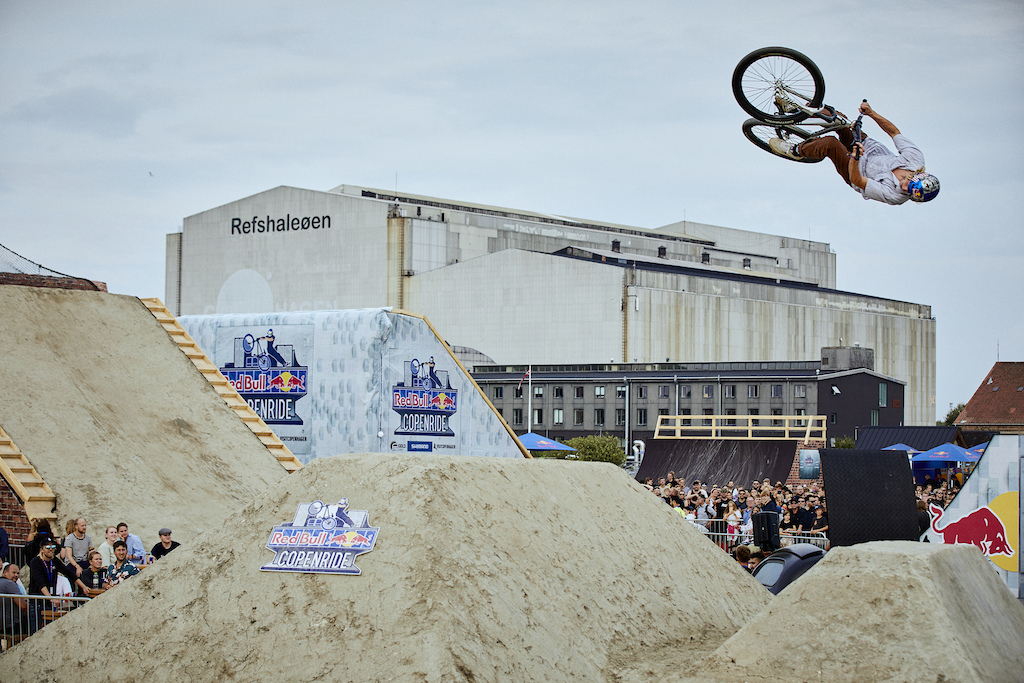 Polish wildcard, Szymon Godziek, stomped a run even he couldn't wrap his head around, scoring a massive 94.66.  What an amazing comeback, since we haven’t seen him competing at a slopestyle event since 2018.

And then there was only one guy left. The Swede to beat, Emil Johansson. But no one could stop him from taking the glory once again. Spinning both directions, showcasing his style and crazy variety, he left the judges with no choice. A 96.33 popped on the screen - and he deservedly took first place in qualis in front of Szymon Godziek and Nicholi Rogatkin in third.

Saturday's final had no chance of ever happening. Since early morning the rain had poured down and wind continuously picked up and the finals had to be decided by the qualifying results. Instead the riders came together and went all in for a jam session - Shimano Best Trick - in front of the large crowd that had shown up. And boy, did they go all in.

After hitting the Shimano Section for 15 minutes, Nicholi Rogatkin together with Griffin Paulson and Alex Alanko decided to go for the 14 meter tall roll in for the money booter after spotting a bang on tailwind. And then the crowd went crazy. That inspired almost all of the riders to go for some hits - showing off one by one. The absolute highlight of the weekend being Nicholi Rogatkin throwing his 1440. Clean as a whistle. Additional bangers were Dawid Godziek’s legendary Twister no hander, Griffin Paulson’s double backflip barspin and Diego Caverzasi’s Backflip barspin cliffhanger What an amazing trick level!

As the Shimano Best Trick jam session came to an end the 19 riders all came together in the riders lounge cheering each other on for putting on a show even though conditions were horrible. And that vibe was all they had been waiting for in more than a year. In the end Red Bull Copenride 2021 wasn't excactly the competition we wanted, but definitely the competition we needed. And next years’ event surely will revenge what was lost this year! 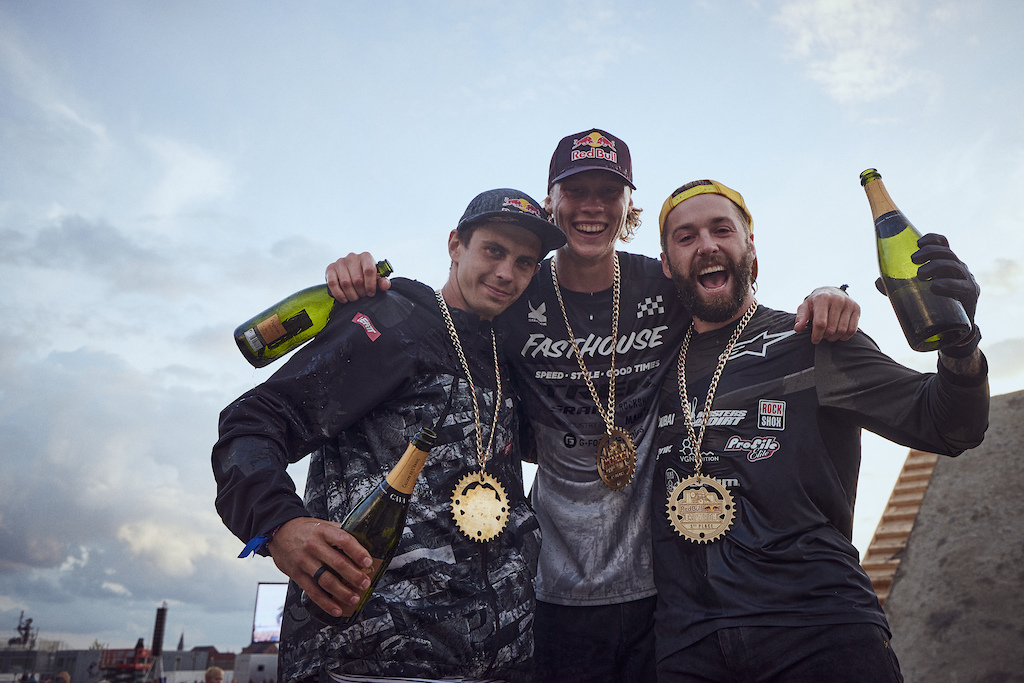 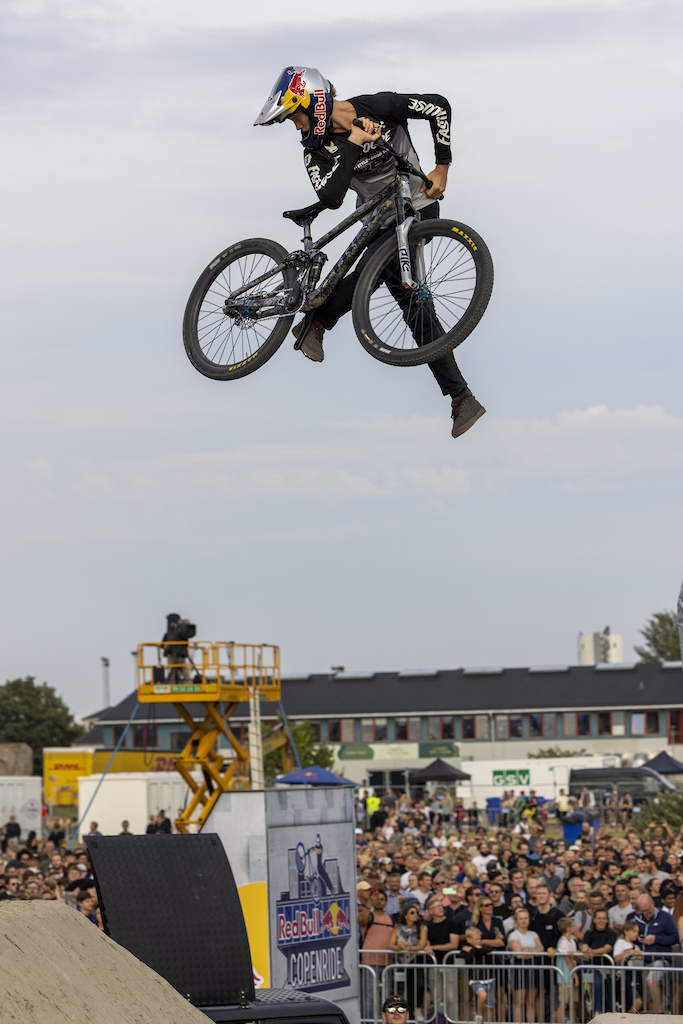 SATN-XC (Aug 16, 2021 at 12:31)
would be badass to have some kind of jump course at the CopenHill power plant...first thing that came to mind when you mentioned "majestic scaffolding"

they did it again

yoimaninja (Aug 16, 2021 at 12:26)
I'll totally give credit where its due, Emil is a beast no doubt. But idk man every slopestyle comp it's like they pretty much just hand him the gold. Personally I don't find him nearly as exciting to watch as riders like the Godziek bros, Rogatkin, or Lemoine. The best trick stuff was next level tho!

anchoricex (Aug 16, 2021 at 21:47)
I try not to be the jaded guy in pinkbike comments who says the rehashed shit like "man bring back the old slopestyle where there was actually style and real features" because that's a borderline boomer comment at this point. Slopestyle evolved and progressed in the way that athletes shaped it over the years and it is what it is, and I can still appreciate it for what it is.

I think what bothers me about slopestyle is like.... what exactly is this sport? It's so niche and so few can partake in it and so few can actually like... have access to places they can train on stuff this size. These kinds of courses aren't open to the public and rightfully so I doubt any resort insurance policy would insure that liability. It's fun as hell to watch (if you've ever got to watch joyride at whistler you probably had a great time) but something about this sport just feels so entirely out of reach for most. It's a far cry bigger than dirt jumping. With dirt jumping there is tons of grassroots jump communities and culture and is also one of those things where you can scrap together a dirt jumper for cheap much like a BMX so it's pretty accessible. Unless you have like a wealthy friend who's into obscure hobbies who's dad also has like a damn excavator and is willing to help him build massive ramps growing up, I just don't always know who this sport is for. I don't know how it can grow into much more than it is today.

Not entirely sure how much of this feels like mountain biking at all outside of the fact that the sport was conceived from mountain biking. At this point you have more than half the riders riding hard tails and the jumps are perfectly curated (which I have no beef with) and you're never going to meet many people that actually spent a few grand on a trek ticket s because owning one of those bikes doesn't make any sense for like 99% of the people out there. I remember buying one a few years ago and immediately turning around and selling it once I realized there was no feasible reason for me to own one. Things have baked into more or less just... really REALLY scary oversized bmx jump comps with a handful more features. I'll never be a WC DH racer but I can still participate in local downhill events, own a full suspension bike and if I'm stupid enough I'm even free to hit the same trails that downhill racers do. Dunno, I don't tune into the live slopestyle comps anymore but I still peep the podium highlights just to see what people are doing. I goddamn love dirt jumping, I goddamn love doing tricks and seeing people do tricks, but something about this just feels like it's not for most people anymore.

In this respect I actually kinda love that Brandon Semenuk still puts the occasional video out where he's on his slope bike and it's just some trail he made and it's cool and fun to watch. I mean yes his stuff is entirely out of reach for us too but it's still nice to see him kind of hold onto the spirit of building shit in the woods but with slopestyle, at least that aspect many of us can feel like we have some relation to. I dunno, kinda hard to articulate, but at the same time f*ck if I know where this sport is going. It will probably continue to evolve and it's hardly in my best interest to bitch about how it should be like the old days, that's not what I'm trying to convey at all. I guess it just feels a little disappointing that it's starting to feel like not really mountain biking anymore.

chriskneeland (Aug 17, 2021 at 6:16)
@anchoricex: Agreed man. Sad state of affairs for MTB. The industry is failing itself. Props to places like Highland Mountain which is holding 3 bronze FMB World Tour events this year. It's keeping the scene alive here in the northeast. There are a lot of kids who are progressing and throwing down, but the coverage is non-existent. Guess Pinkbike would rather click-bait with ebike articles than cover actual mountain biking.

Yerts (Aug 17, 2021 at 8:48)
@anchoricex: Maybe it's regional and you just live in a part of the country where access to big air is limited. Out here in the PNW it's not hard to find big stuff to hit and not hard to find airbags.

anchoricex (Aug 17, 2021 at 12:44)
@Yerts: I literally live in Seattle lmao. Be my guest, point me to jumps that are of slopestyle magnitude that are open to the public. Even some of the pro slopestyle athletes have mentioned their first time in a slopestyle comp during practices that it was the first time they've even touched features of that size. Jumping into a bag is a far cry different then actually having a course hell even pieces of a course that's in a slopestyle comp available to you to train on.