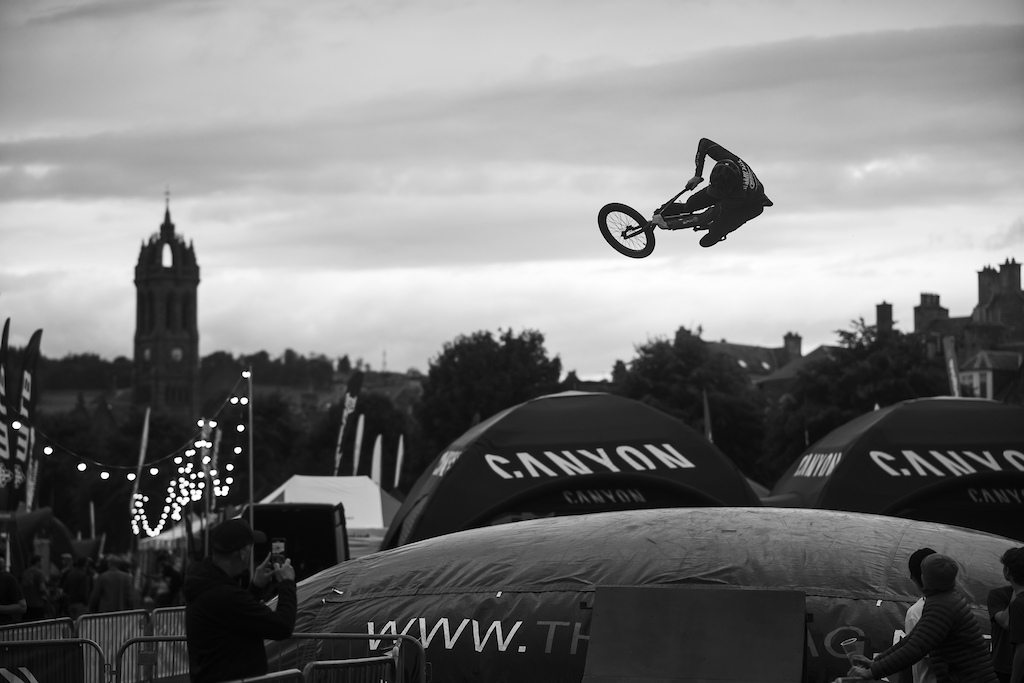 
It's not much of a story to say that 2020 sucked the life out of bike events. The bigger story lies in how those events have bounced back and how the riding community has responded. To celebrate their tenth year, last weekend TweedLove hosted the Chain Reaction Cycles Bike Festival. Bringing together some of the most forward-thinking and exciting global brands, mixing in a cocktail of activities and then unleashing a long suppressed desire to party. It turns out that it was just what the world - or at least this part of it - was waiting for.

Driven by a belief that racing and riding is for all, the Festival organisers simple aim was to get everyone together to have a good time. With three sold-out races bringing the Tweed Valley hills and forests to life, TweedLove's race heritage was always going to be at the heart of the weekend. But there was far more to this. As the crowds rolled into Peebles, the anticipation steamrollered into a theme of high stoke and positivity from all corners. This wasn't just to be about elite racing or spectating, it was about participation on all levels by all abilities. By Friday evening, there was already a high sense of anticipation that this was going to be the best TweedLove gig yet. 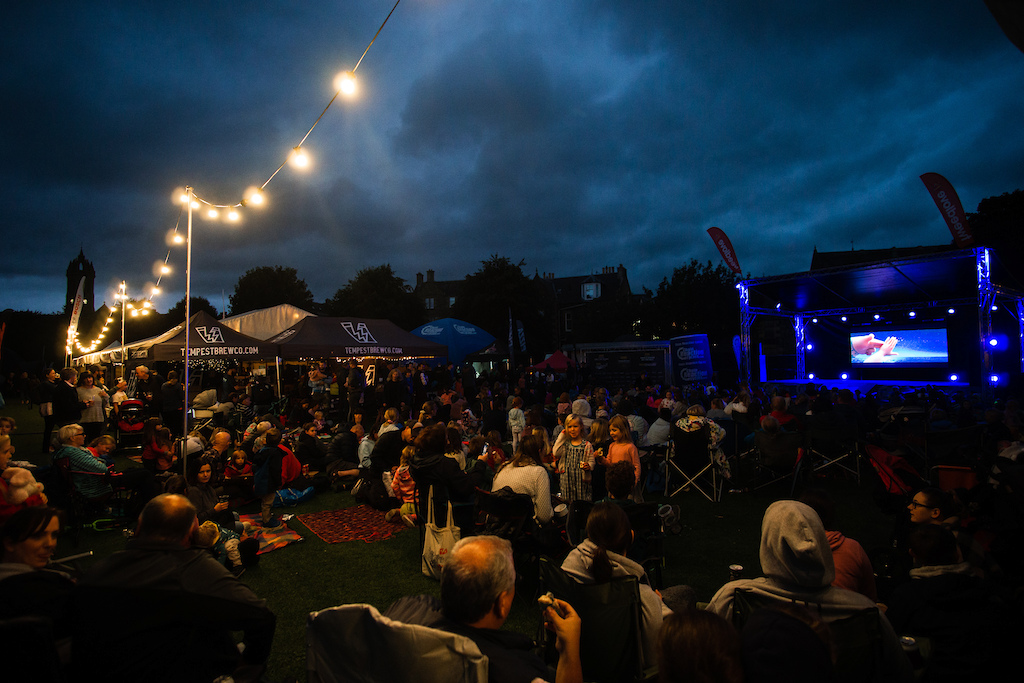 The Frog Bikes Family Film night captured the party mood - We're back
The people kept coming. The vast array of Expo stands were vibrant with colour and surrounded by a constant buzz of interest in what the industry was going to let us play with. As demo bikes were taken to the hills by prospective n+1ers, visitors were given a detailed look at what was to come. The freshly unveiled YT Capra was the focus of much admiration, looking gnarly even when just standing still on Tweed Green. 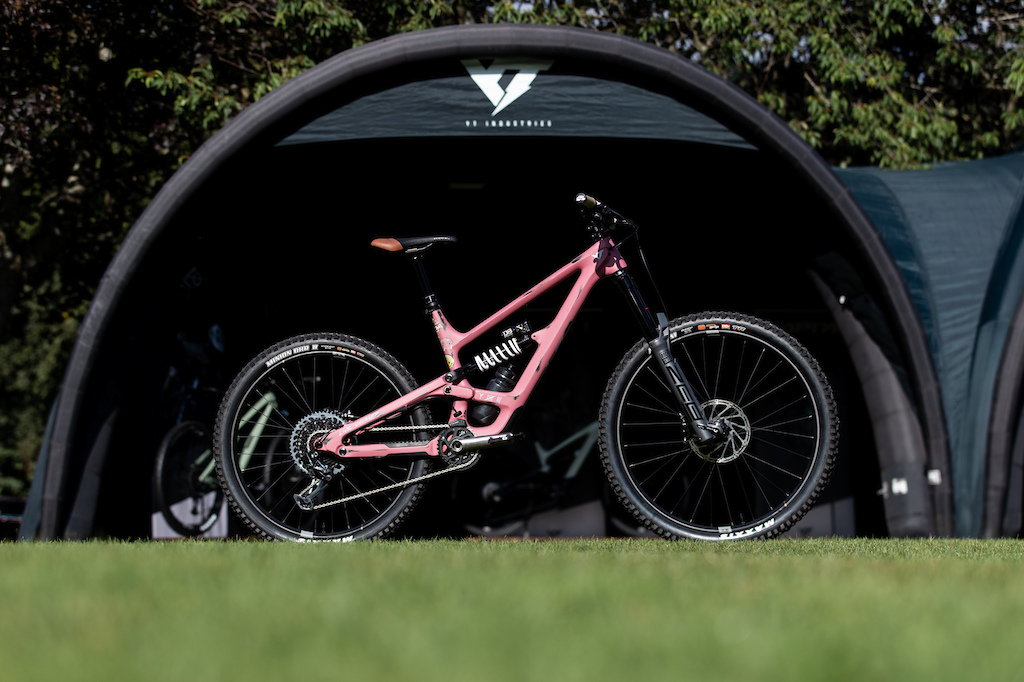 The YT Mill crew brought the party vibes with them. And this bike looked ready to party.
Early estimates of turnout suggest that around 7,500 people visited the Tweed Valley to enjoy the racing and party vibe. Demand and interest from brands had accelerated in the lead up to the big weekend and ultimately some had to be turned away. As the wheels kept turning, the tunes kept playing and the hot wood fires kept cooking, the bike industry's faith in the riding community's desire to have a good time was being repaid tenfold. 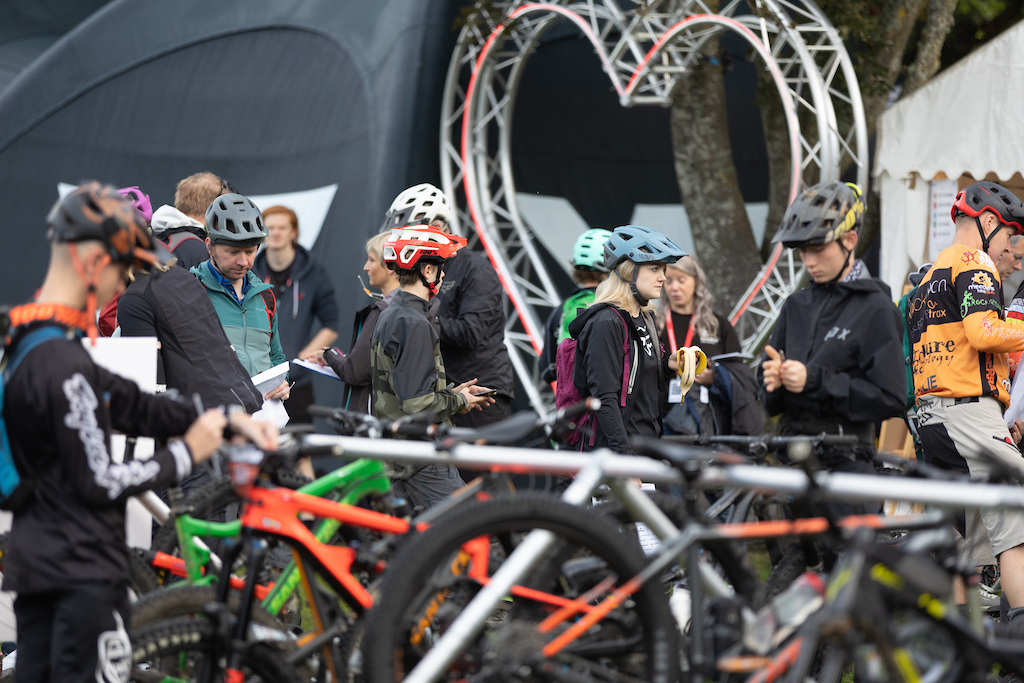 High turnout repaid the big brands faith in backing the Bike Festival.
More than 1,200 people were lined up to compete in the three big races, with even more getting involved in activities on Tweed Green. Scottish Bike Trial ran a challenging course for experienced trials riders with some come-and-try sessions for novices. Club Sport Borders had (often hilarious) grass track racing for all ages and the Frog Bikes Family Ride attracted hundreds of riders to the closed road mini-tour of the area. It was the Canyon Airbag that provided the big feel-good hit of the summer, as riders racked up airtime whilst getting top-tips and demos from the Canyon CLLCTV and Chain Reaction riders. 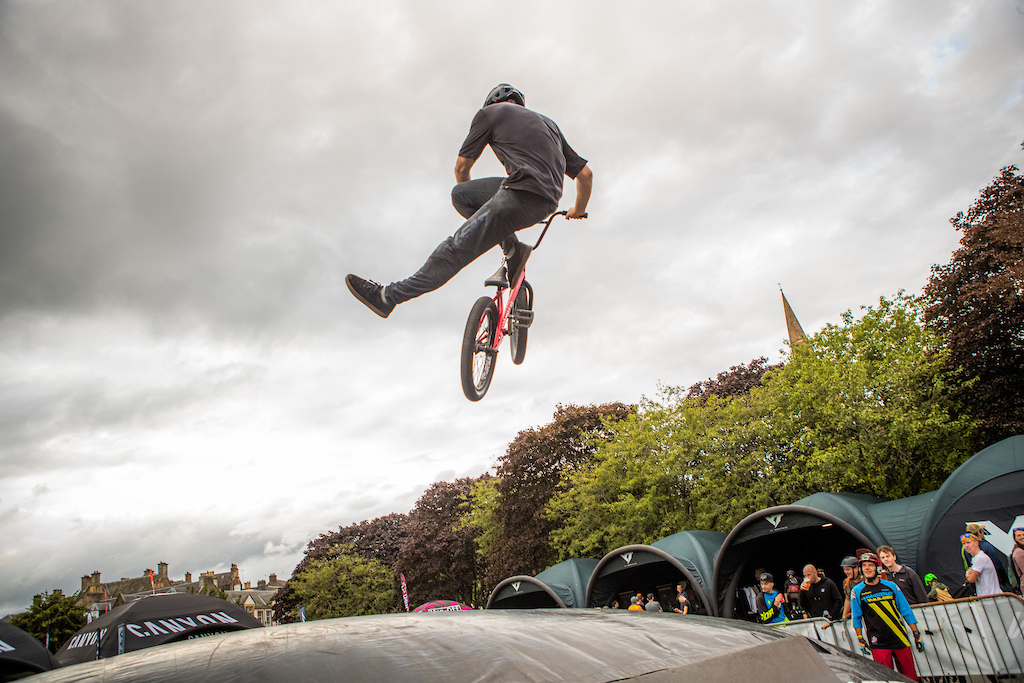 Free to all, the Canyon Airbag was a big hit on all levels
Saturday saw the progression of mountain bike racing in evidence with two very different races, both of which having enduro at their core. As riders departed the stage for the Ridelines Enjoyro and the Bosch eMTB Challenge, the future of elite racing was on display. 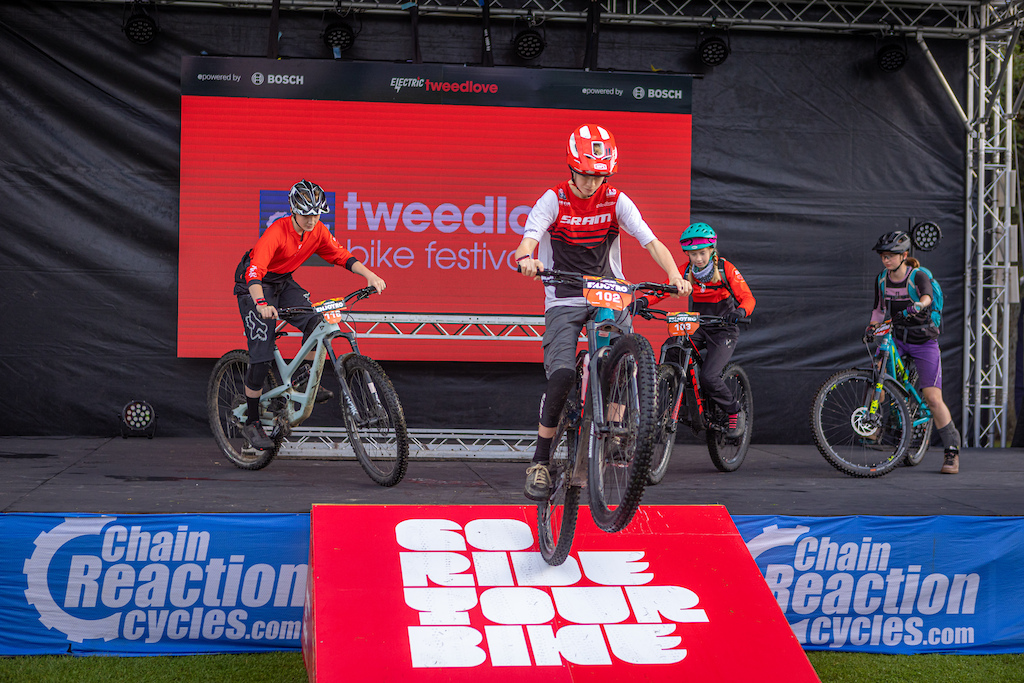 All riders got to experience the same Grand Départ
Designed to be an entry-level stepping stone to the big time, the Ridelines Enjoyro enables all riders to experience the thrills of racing enduro, without too many of the demands that TweedLove's tougher courses can throw at you. It also allowed some younger riders to show us all what they've got. Previous winners have gone on to race the World Cup circuit, so the youngsters knew they were following some high calibre tyre tracks. 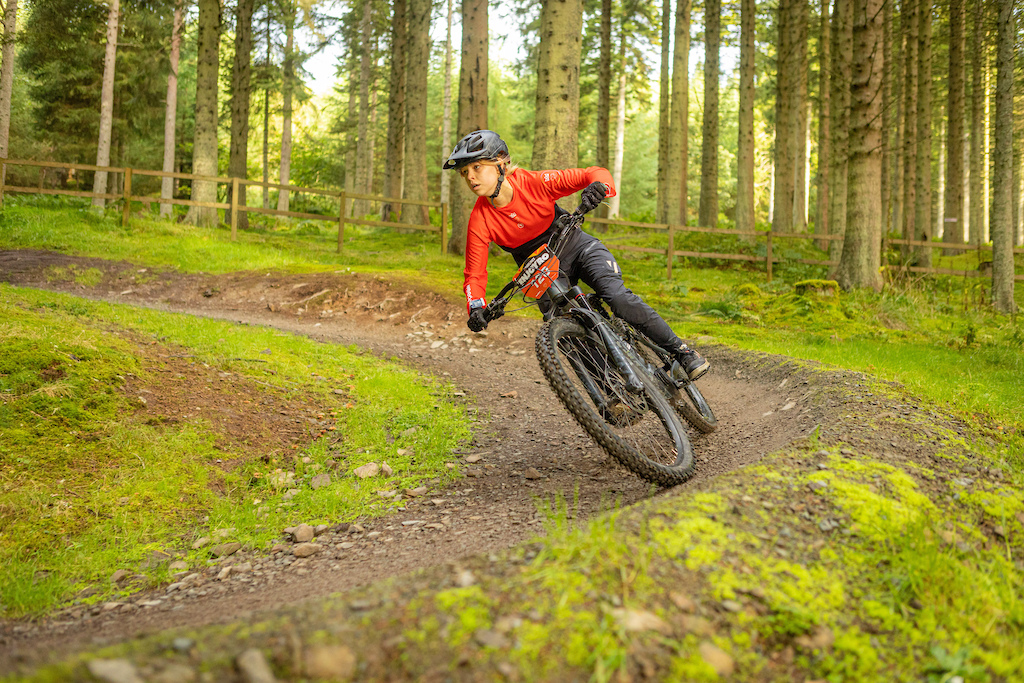 Ranging from blue grade to entry-level 'off-piste', new racers could really engage with the format
The massively over-subscribed UK round of the Bosch eMTB Challenge was the biggest yet. Six tough stages that included 'no feet' bonus zones - combined with a series of orientation points for the riders to navigate - the challenge provided big smiles from the start. 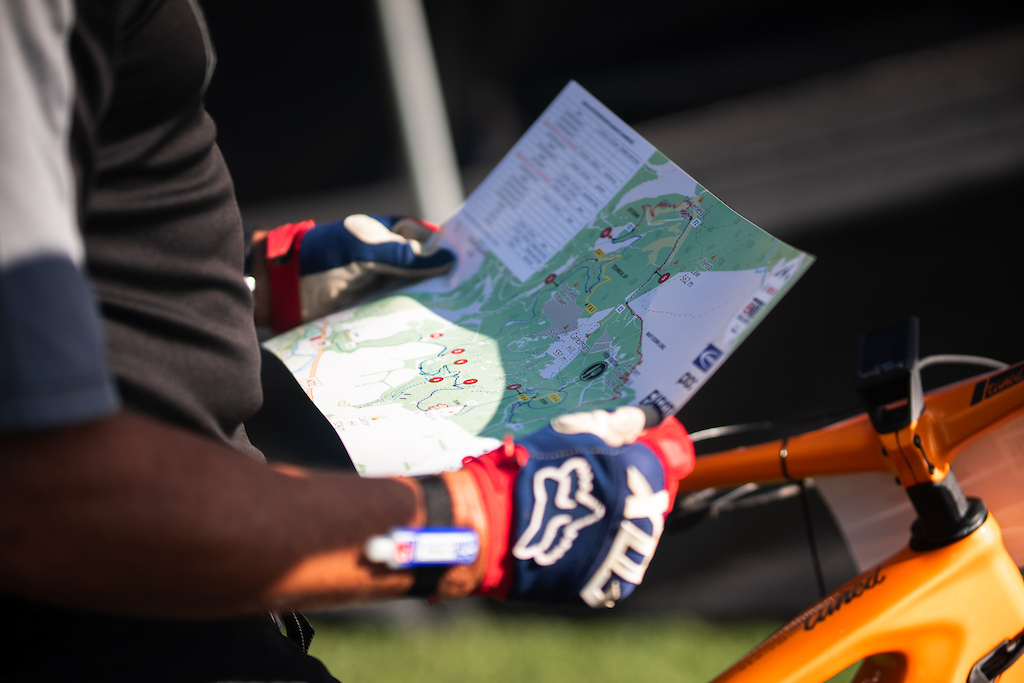 The race format requires a bit of navigational know-how, as riders only learn the course as they depart the stage
The big players were in attendance to show what their latest creations could do. The progression of eMTB has been exponential and Electric TweedLove was evidence that this is where it's at. The quality of riding on display in the advanced male and female categories, coupled with the precision engineering that was railing some of Glentress Forest's toughest enduro tracks led to some fierce competition for the title. 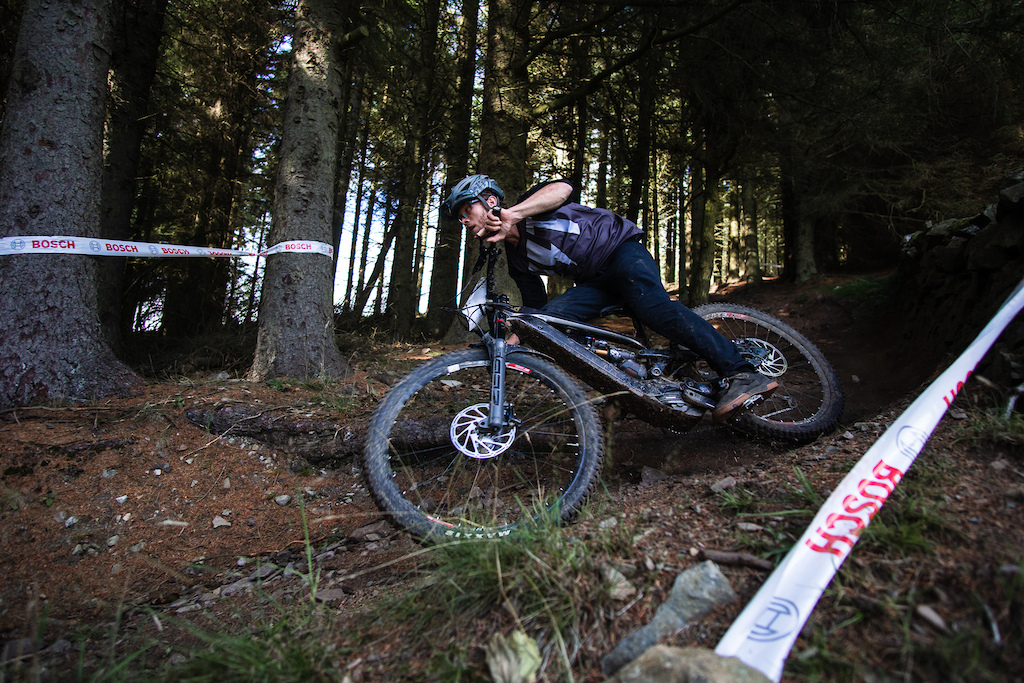 The advanced course wasn't to be taken lightly. Power and gravity management were both key.
If ever there was a strong signal of how important electric bikes are to the industry, the advanced podiums said it all. Trek, Specialized, Whyte, Nukeproof and YT all had riders taking podium spots with well-known faces steering them to victory. 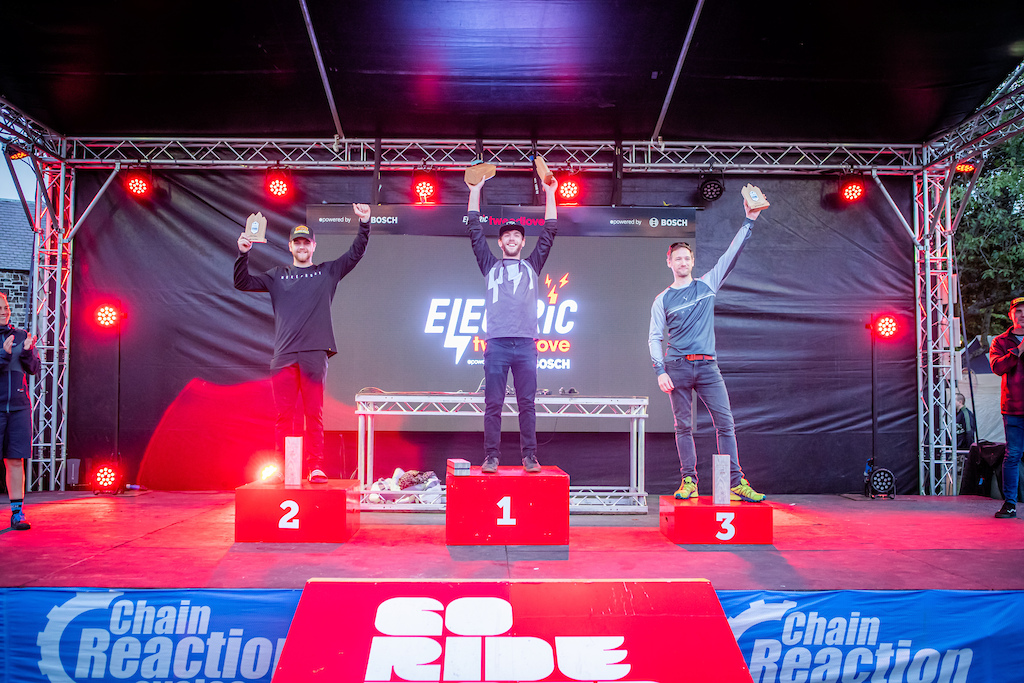 Whyte, Nukeproof and YT all finding their way to the advanced male podium, with the YT Mill making a lot of noise for their winner.
By Sunday - as the event village fired into life once more - it was the turn of the big guns to hit the hills in the Pirelli Tenduro. Designed to be a taste of ten years racing in the Tweed Valley - taking in tracks across three different forests - TweedLove mixed in a few favourites from some of their biggest races that all added up to be a big day in the saddle. 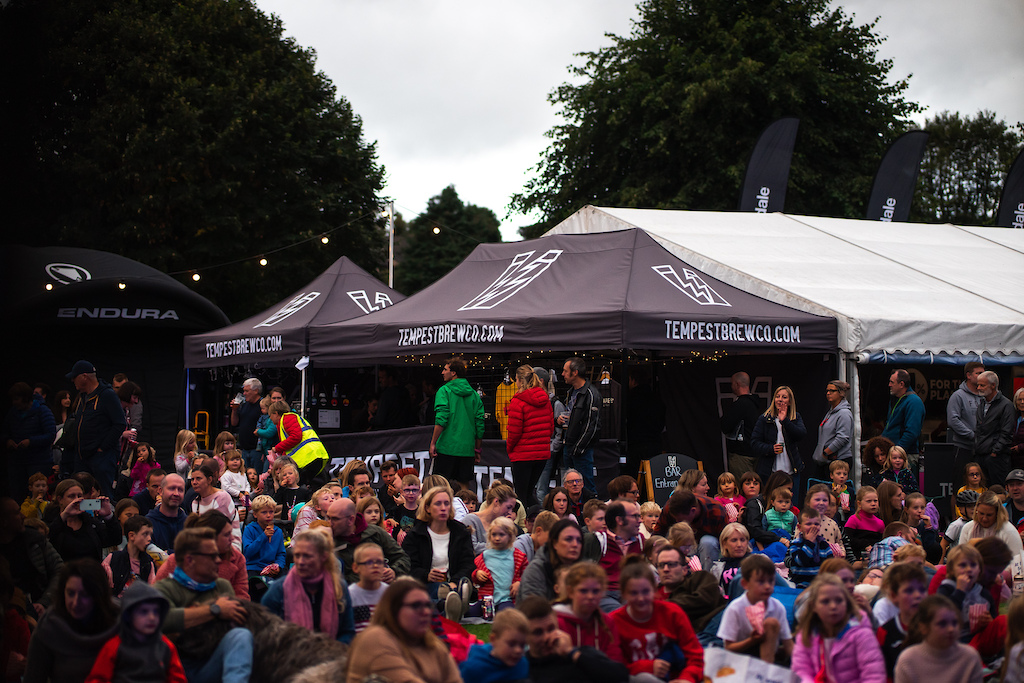 By Sunday, all the talk in the event village was focused on one man. Could Nukeproof's Corey Watson go undefeated in the Triple Crown?
The weather had been kind to festival-goers, but as darkness fell on Saturday the rain came and dramatically changed the nature of the tracks. By Sunday morning the sun was back, but riders memories of loose dusty chutes were replaced with an altogether different challenge. The Tweed Valley trails had done what they do best and morphed into a very different beast for the pack to try and tame. 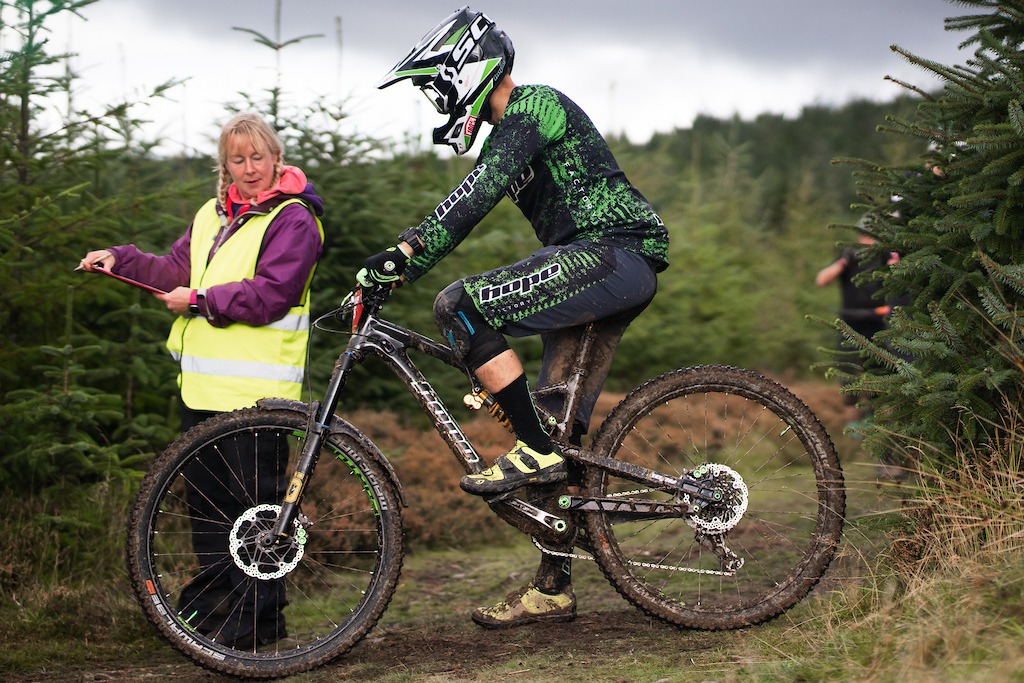 Jess Stone laid down consistently fast times all day, taking 4 out of 5 stages and the overall win. A retirement in a previous round had ruled her out of taking the Pirelli Triple Crown title, but her delight in the win was testament to her skill, fitness and application in racing. 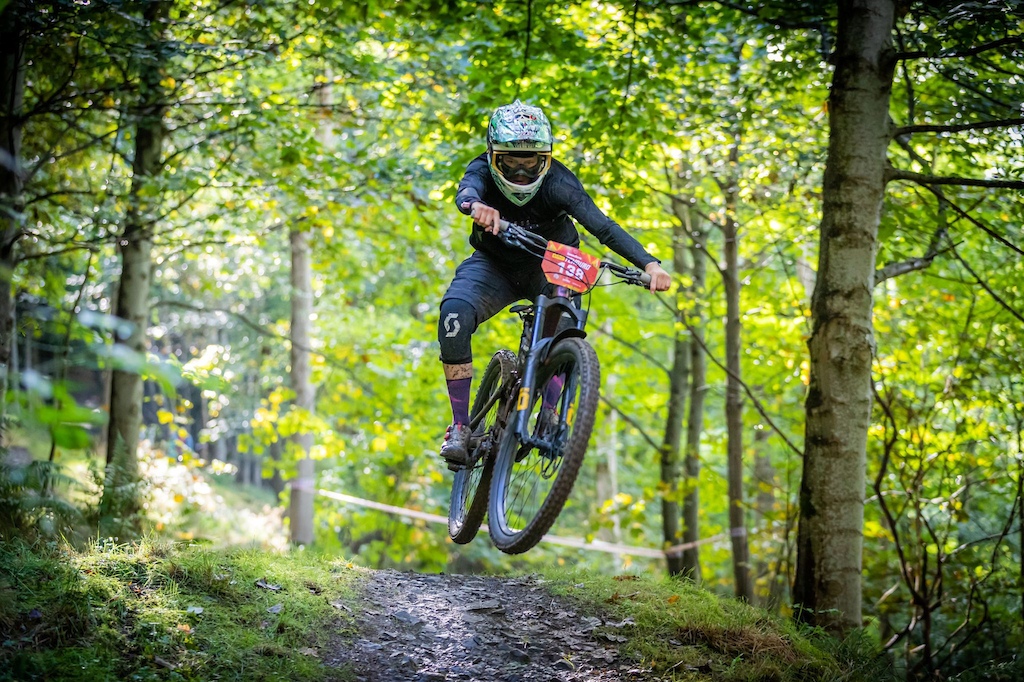 Always stylish, always fast. Jess taking a convincing Pirelli Tenduro win
Nobody had ever really doubted Corey Watson's ability to take a clean sweep in the Triple Crown, but with fierce competition buzzing his wheel at every turn it was never a foregone conclusion. Many quality riders including Sam Dale, Reece Langhorn and Joe Barnes had made the trip. Then there were the local big dogs to contend with such as Lew Buchanan, showing the way for the up and coming new wave of enduro talent including Calum Johnson and William Brodie.

He did more than just win. Taking three stage wins with times that left other riders scratching their heads, he had styled up every stage on his Nukeproof Mega and he was smiling the whole way round. 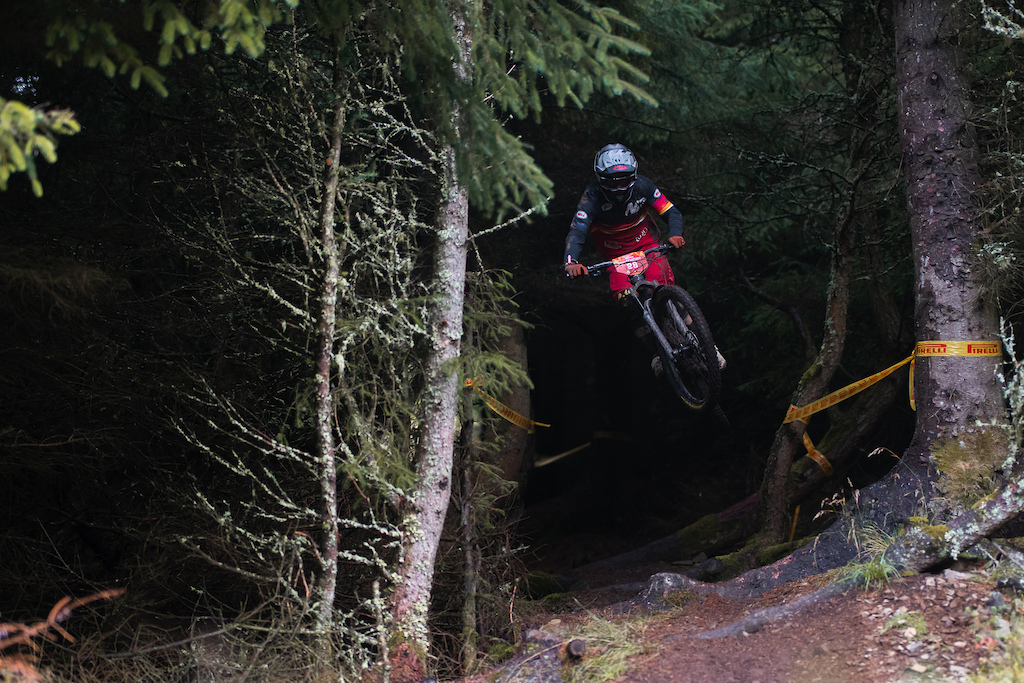 Emerging from the darkness, 2021 is Corey's year.
Less than six months ago, the events industry was still in darkness. TweedLove knew what they wanted to do and partnered up with the right people to make it happen and every one of them knew it would be a challenge like they had never faced before. Last Friday morning, it all came together and we all finally knew - "We're gonna have a good time, we're gonna have a party" 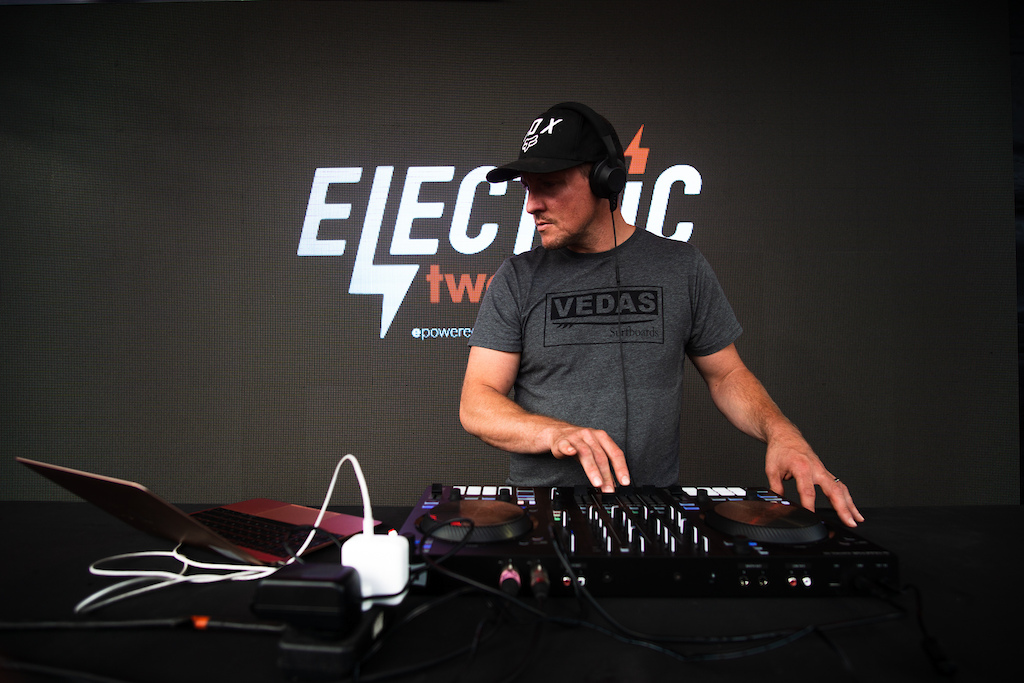 mkingshearer (Sep 26, 2021 at 9:56)
What a weekend! Thank you, TweedLove, for giving us so much more than the best best festival ever, and at a time when we needed it most❤️❤️❤️