Exploring the Babine Mountain Range in Northern BC 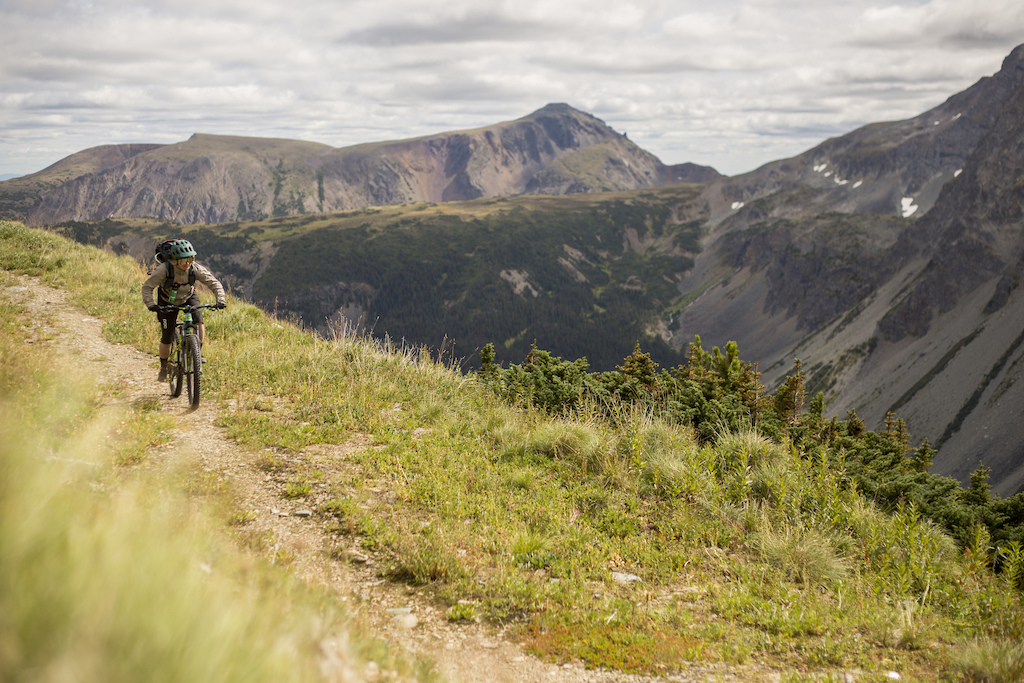 The allure of alpine riding in the rarely documented Babine Mountain Range in Northern BC beckoned us. A biking traverse that owes its existence to the boom and bust of a mining operation is a challenging 42km. The ride covers significant historical ground and equally significant physical gains totalling well over 1000 meters. Enthralled by the limited beta on such an intriguing landscape and reason for existence, my research became an obsession and it wasn’t long before I was packing my Polygon Siskiu T8 in my Evoc bike bag and flying North of Squamish BC to Smithers BC to document the Cronin Pass biking experience with riding pal, drone pilot and good time galore girl Alex Armstrong (Army).

I shoved a hydration tablet into my prefilled water bottle on my bike and hear Army say, “gah! It’s 11:30 pm and we have to wake up at 3 am – goodnight!” After a short sleep that was equally restless thinking about anything I could have forgotten and full of excitement like a kid trying to sleep on Christmas eve - the abrupt alarm summoned our sleepy bodies out of bed.

Coffee, headlamp, helmet - shuffle out the door in the complete darkness.

After a quick vehicle staging convoy, we were in the parking lot of Cronin Pass double-checking tire pressure before setting off into the dark with easily accessible bear spray. Entering Grizzly territory pedalling through thick brush filled with tasty berries is always a bit nerve-racking, especially in the dark. Our first 4.5 km were decently flat making for quick travel and not a lot of conversation – primarily bear warning calls to alert the fuzzy ones we were coming their way. As the forest lightened we arrived at our first cruxy move – a trail blown out by a rushing river meant a shoeless river crossing was in order. Nearing freezing temperatures and we stripped our shoes and socks and made the crossing – if there was any question of still being tired, the brisk water certainly woke us up. 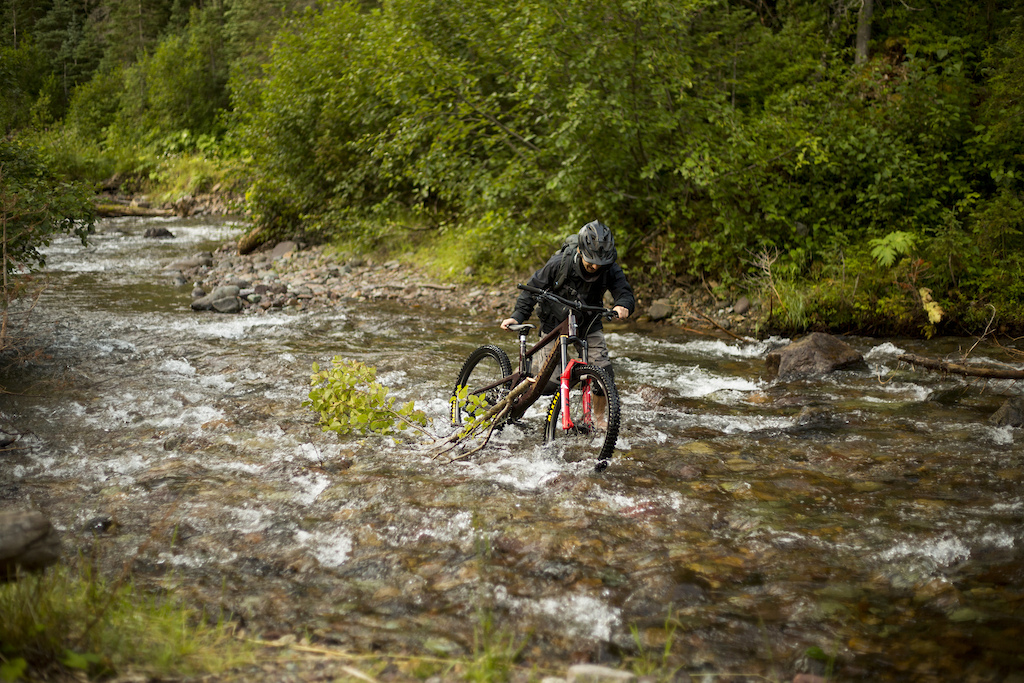 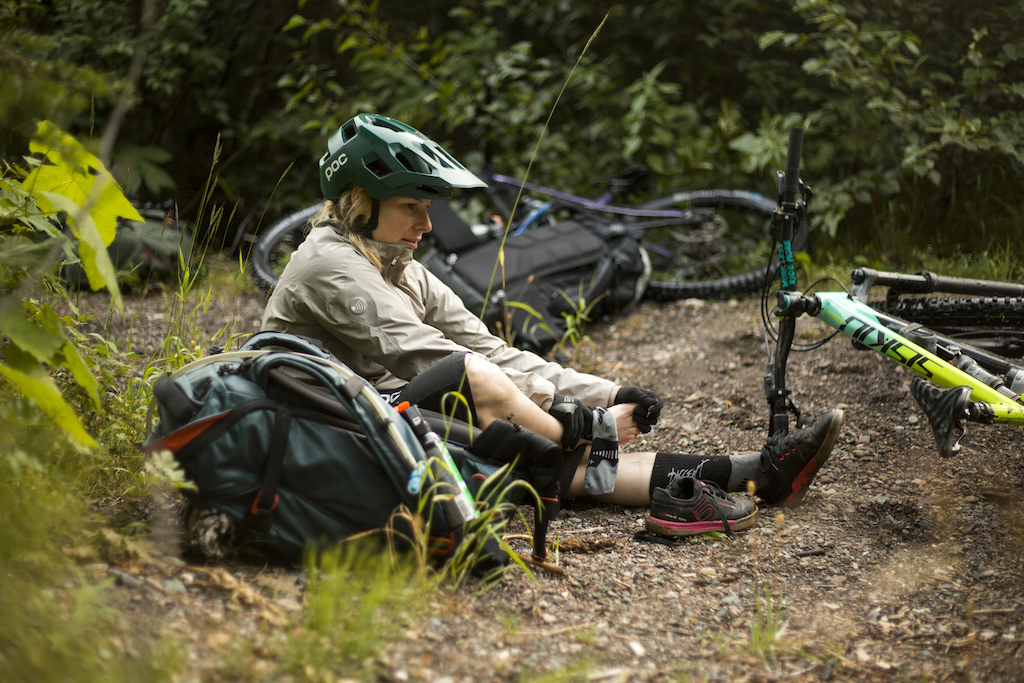 A few more clicks on my Siskiu T8 and we emerged at an old cabin – the first sign of the mining history (aside from the overgrown road we had been travelling on) that once made this remote and desolate trail a bustling community. Taking our time, we explored the cabin, the nearby abandon tailing pond and collapsed mine shaft. Our curious explorations lead us off the not-so-beaten path and it took a little looping about to get us back on track. After the main mine, we entered 4km of bushwhacking and minimal bike riding. Luckily the brush was smooth and our spirits high – we laughed a lot – or maybe I blacked out and already forgot about the struggle, but the vibes were high with glimpses of our alpine objective insight it was easy to see through the struggle. 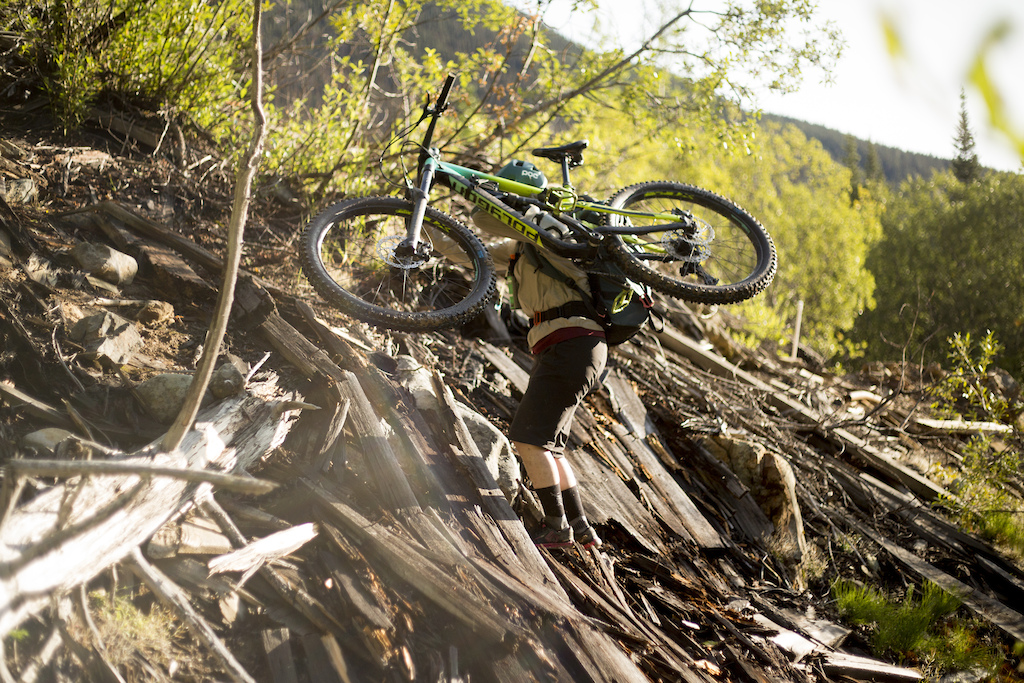 A branch off the main trail lured me in with a small cabin marking the corner. Exploring further we found a whole collection of cabins and mine-related buildings - another look into the past that gifted us this trail, and this time it was right at the subalpine. 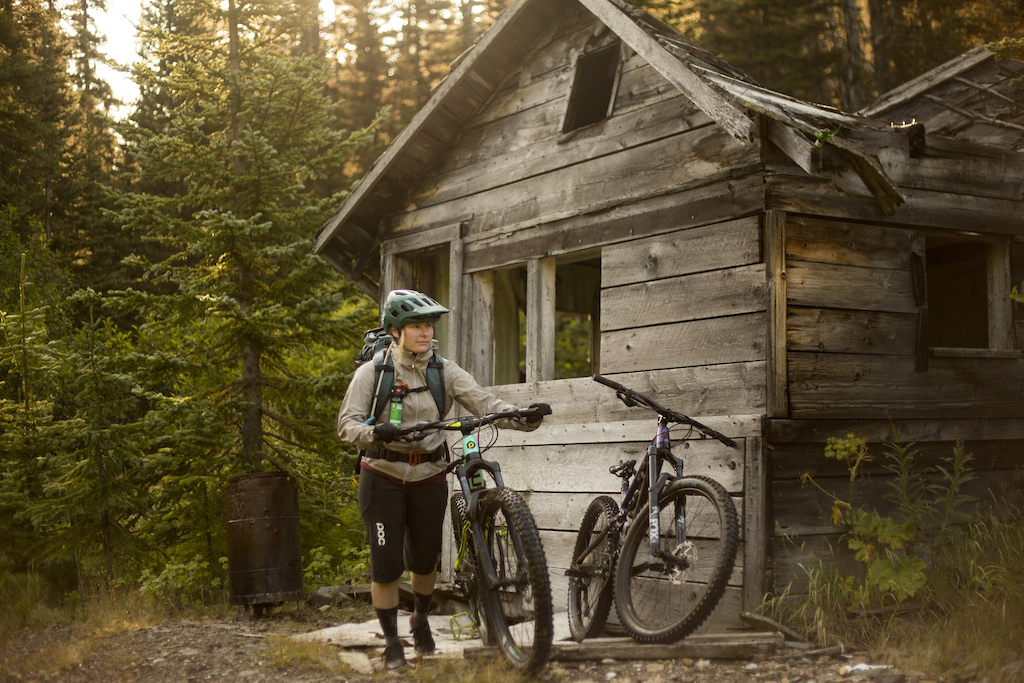 Grinding the last of big up we were rewarded with 360 degrees of “wow”. Glaciers hung just above us, goats galavanted along with rocky faces and tremendous peaks engulfed us. The magnitude of the Babine Range was overwhelming in a downright mountain spiritual kind of way. Enthralled with the beauty my camera begged to come out to capture it and just as Army and I set up for a shot we were halted - major mechanical. 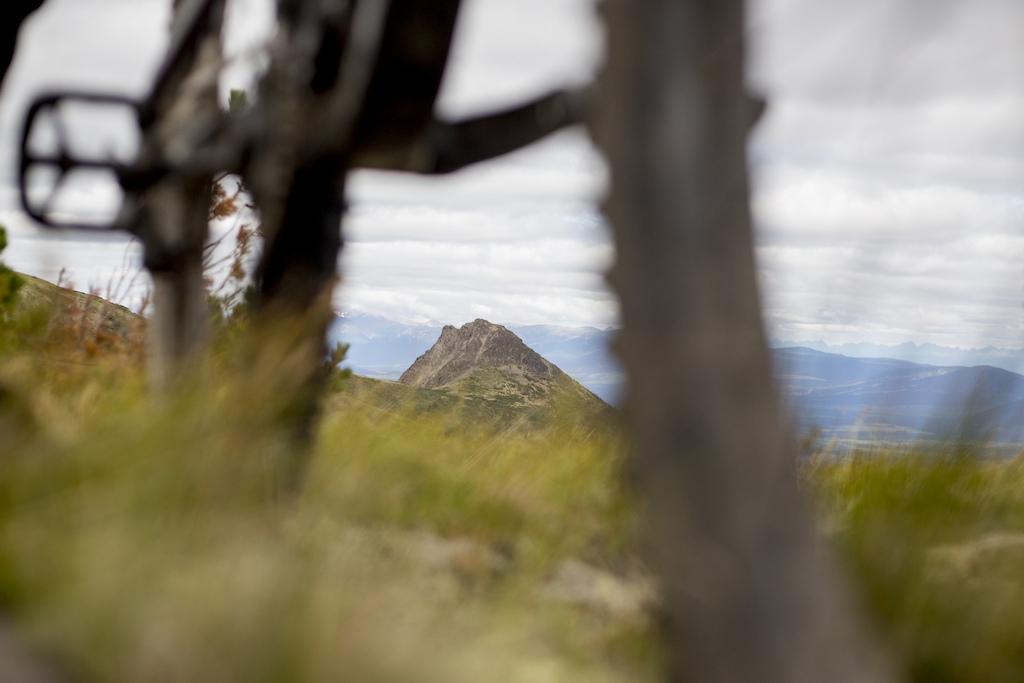 Zach, no stranger to bike fixes, McGivouring and keeping his cool, performed delicate surgery on Army’s derailer. For a moment we were coming to terms with Army needing to ride the entire pass chainless when Zach was able to save the day, with a little help from the OneUp Components EDC tool no doubt. Mechanical downgraded, we were back at it. Shooting in the alpine, blissfully riding the Hyland Pass zone - stopping for repeated jaw-drops and reciting “this place is beautiful” like it was going out of style. Vibrant greens, turquoise lakes, waterfalls, more mountain goats, red shale slopes, black rock and lingering wildflowers - we sincerely couldn’t have imagined anything so epic. Epic enough that we decided to eat, make coffee and have a small alpine nap to soak it in just a little longer. 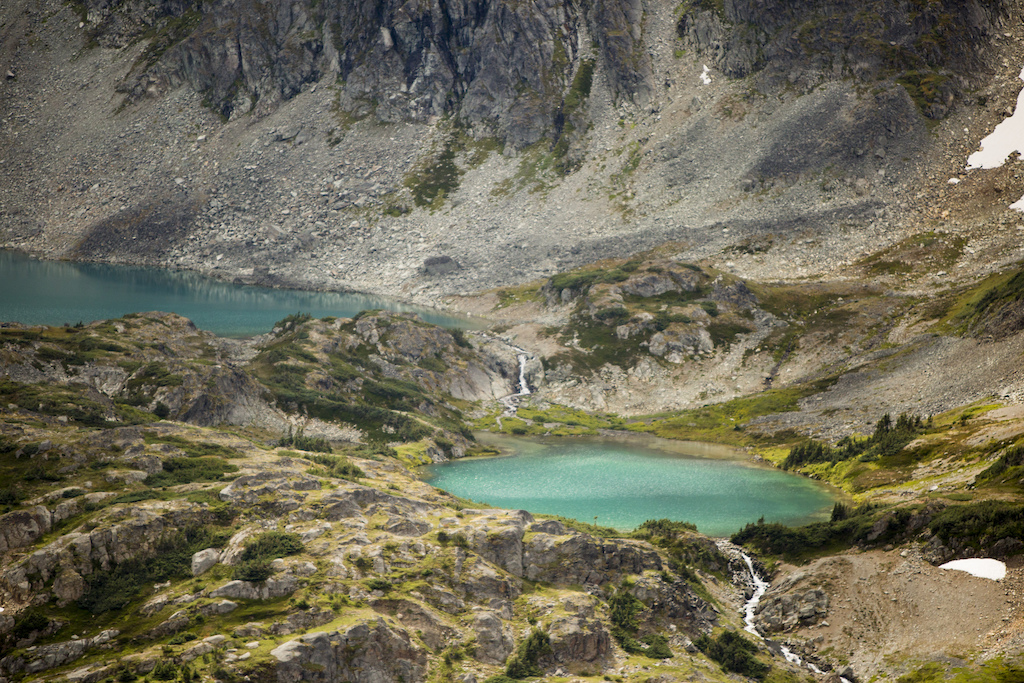 Refreshed and not eager to leave, we decided to make moves before we found ourselves doing a headlamp descent - but surprise - there was one more sneaky up before dropping into Silver King Basin. It was a single-track push, but then we were treated with a thin little trail through a boulder field that housed active and curious marmots. 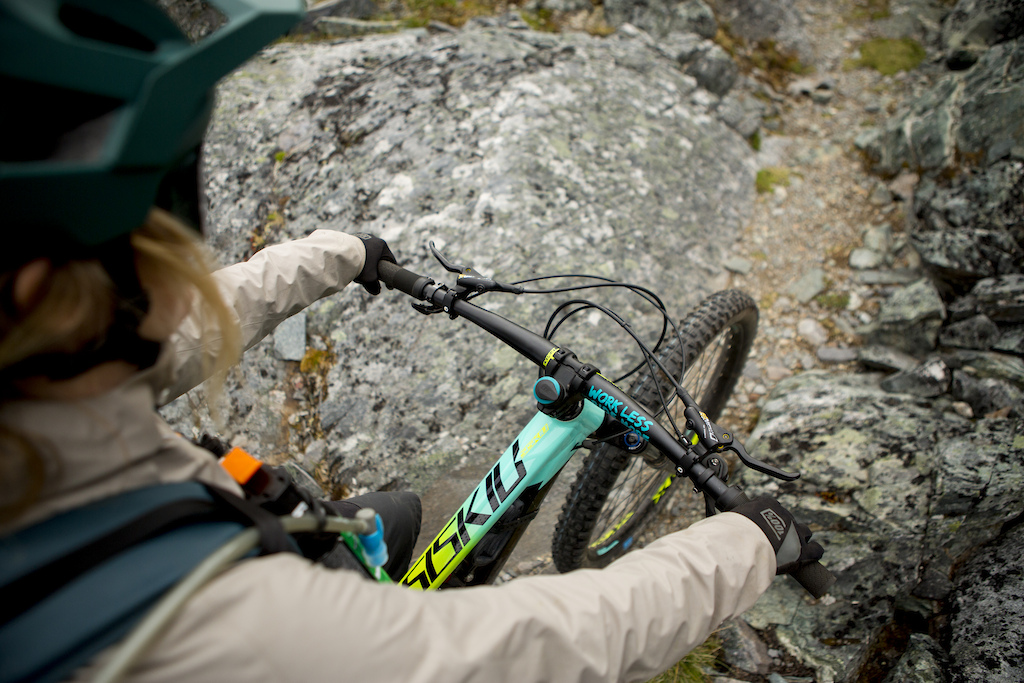 Descending looked long as we could see the winding trail beneath us from the top of the pass. A thin trail through the moss and lose alpine rock managed to feel flowy and natural. Keeping our eyes on the trail was the biggest struggle - so many distractions. For a multi-use trail and a traverse to boot, the descent was much flower than I imagined and it seemed to fly by.

As we entered the Silver King Basin we found another old mining shaft - one that still had mine carts on rails coming out of it. Shortly after we rode past the Joe L’orsa backcountry recreational cabin. We embraced the fast-paced trail, more bear calls (we saw one on this section) and a large subalpine field with wildflowers - other than that it was 6 more km of green tunnel biking but with lots of fun side hits and lots of speed that eventually brought us to a road. 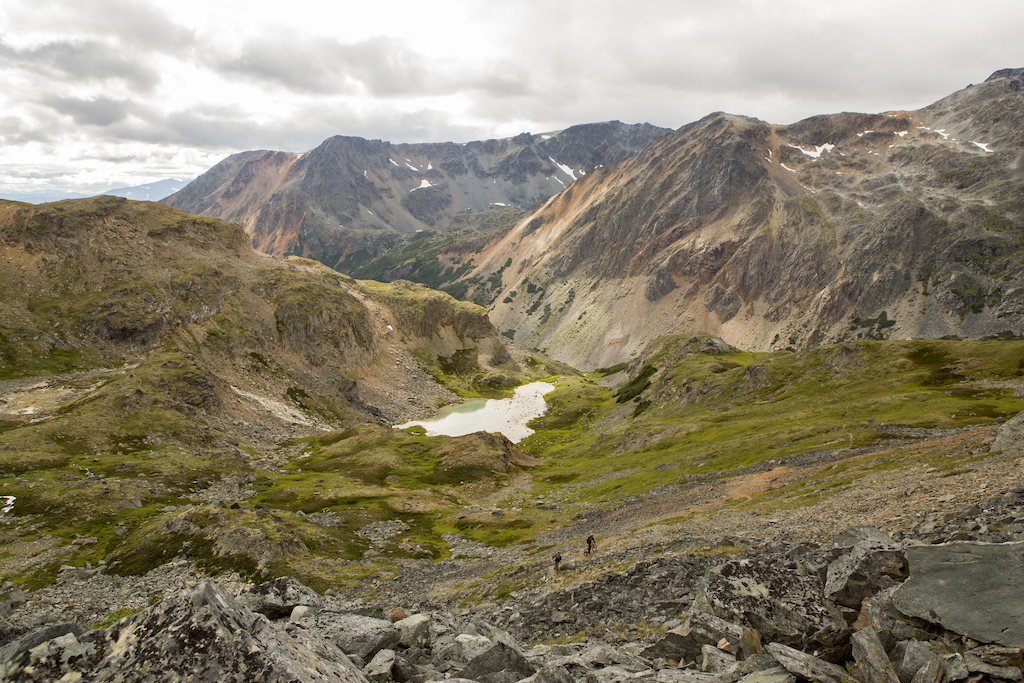 Funny enough, the way up felt faster than the last 7km on the Driftwood Road back to the truck. Knowing that beers awaited us and that our bike shoes were about to come off after 16 hours we couldn’t get there fast enough. And then when we did, we had a celebratory shotgun (thanks OneUp) like the professionals we are and of course, ate our body weight in pizza later. 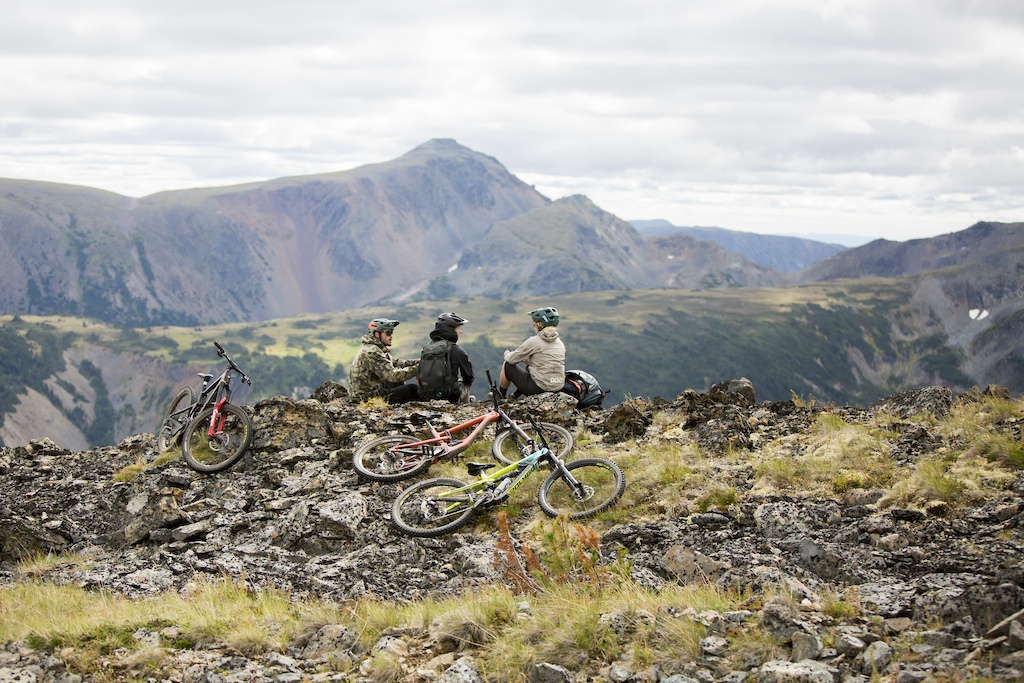 skimtb1 (Oct 24, 2021 at 19:11)
I used my Google Pixel 3 cell phone to browse this article with my Koodo cellular data plan while sitting on the toilet to pee because I didn't want to stand and pee and get pee on the rim of the toilet which happens approximately 6/10 times that I pee standing up.

Don’t leave home without it !

geoffcalv (Oct 25, 2021 at 8:38)
Id rather see something like this where a some rad people do something interesting and give shoutouts to their sponsors to help cover trip and gear costs than the 1000th bike check with rockfox suspension (3 tokens?!) or a sanitized "article" put together by some brands full marketing team and curated by copywriters, professional photographers, and massive budgets.

This type of article is way more relatable, gets me stoked to ride, and go check out cool places. Im ok with some sponsor shoutouts to make that happen.

skimtb1 (Oct 25, 2021 at 12:47)
@geoffcalv: I get it, but I remember a time when bike journalism pieces, didn't need cringe-inducing product call-outs gratuitously shoved down the reader's throats... Instead of blatantly calling out the brand and model of the multi-tool, surely a photo showing the tool, the trailside repair, with an epic alpine backdrop would create similar, if not better brand recognition?

abbydell (Oct 26, 2021 at 7:20)
@geoffcalv: Thanks for the grounded comment on this thread - appreciate your understanding.

sonuvagun (Oct 24, 2021 at 10:16)
The beauty of the Canadian wilderness is always so much more than can be captured in visual media or words, but this put it in a pretty good nutshell.

It's one sanctioned route. It can be made into a gravel route but that's it for now

abbydell (Oct 26, 2021 at 7:22)
On the Provincial Parks Map, there is actually biking permitted on a few other trials although the grind would be real - I've hiked them lol.

leelau (Oct 26, 2021 at 10:26)
@abbydell: right. I was going to link the BC Parks map but frankly if anyone is motivated enough to get out there and do some exploring they can do the google themselves. THere's all sorts of routes on Alltrails, heatmaps or simply go talk to some of the locals. It's leg-work but not rocket-science

stringbeane (Oct 25, 2021 at 11:30)
If you wanted something in the same general area but not the same mountain range, you can do the Telkwa pass.

abbydell (Oct 26, 2021 at 7:24)
Check out the provincial park map, there are a few other trails that allow bike access although I'm not sure if you'd want to ride them. lol The Telkaw Pass is a great idea or even around Babin Lake for some flat scenery would be pretty cool!

Hendersondylanmichael (Oct 24, 2021 at 21:05)
heard a rumour that poaching the hiking trails in the park makes for way better riding than anything on the cronin route

skimtb1 (Oct 25, 2021 at 5:51)
Obviously they aren't getting paid by a hydration tablet company. Sponsor applications have been sent into Nuun with this article attached already