Join Pinkbike  Login
Living in Boulder, CO the last few weeks have been rough as a mountain biker. We received big snow just before Christmas, and in an uncommon weather pattern, it hasn't melted off just yet. We're left riding spin bikes and dirt roads if we're lucky. Because of this, my friend and I headed down to St. George, Utah for a few days of cleansing the soul; aka riding real singletrack. St. George is in an incredible location, sitting in a valley between the Pine Mountains, Zion National Park, Snow Canyon, and empty desert to the south. Everywhere you look, you have a beautiful view. The riding isn't too bad either, with enough options to keep you busy for weeks. Despite the high elevation, big ticket items like Gooseberry and Little Creek being snowed in, we still managed to have a blast...

The Santa Clara Trails; Barrel Roll, Sidewinder and Suicidal Tendencies, are on the west side of St. George, and they are something special and so close to town. Despite literally being on the edge of town, these trails are built on a series of anticlines that allow you to feel like you're away from it all. 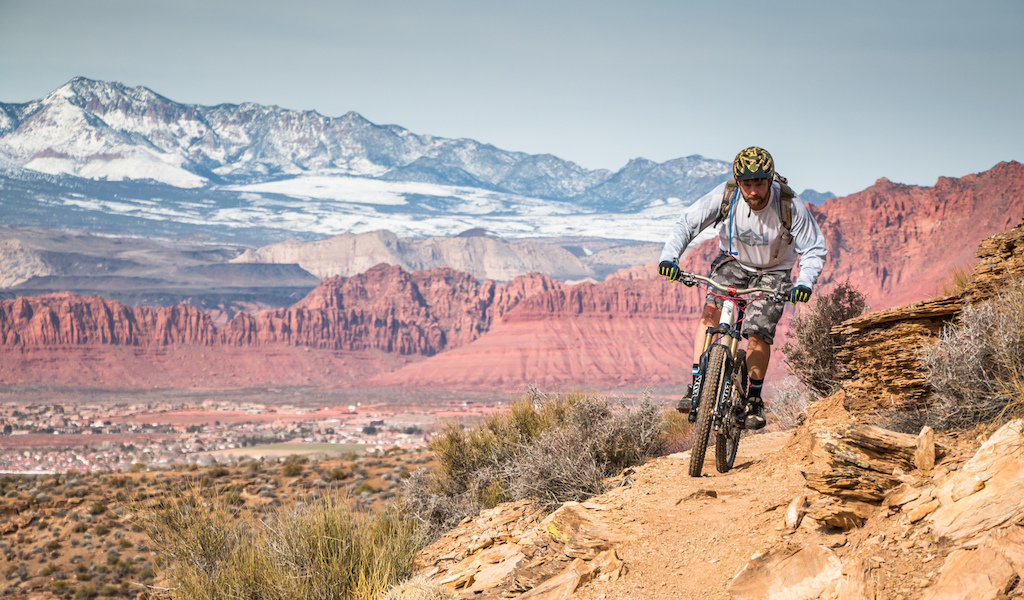 Depending on which trails you link up, you can put together a quick one-hour loop or a 3-4 hour ride that totals almost 20-miles. 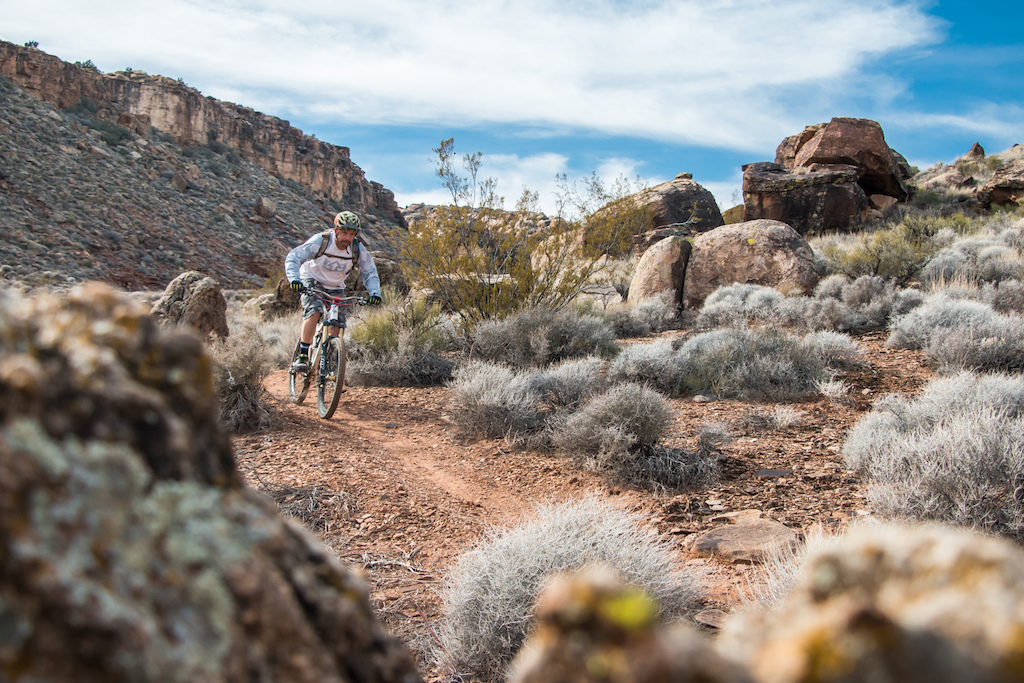 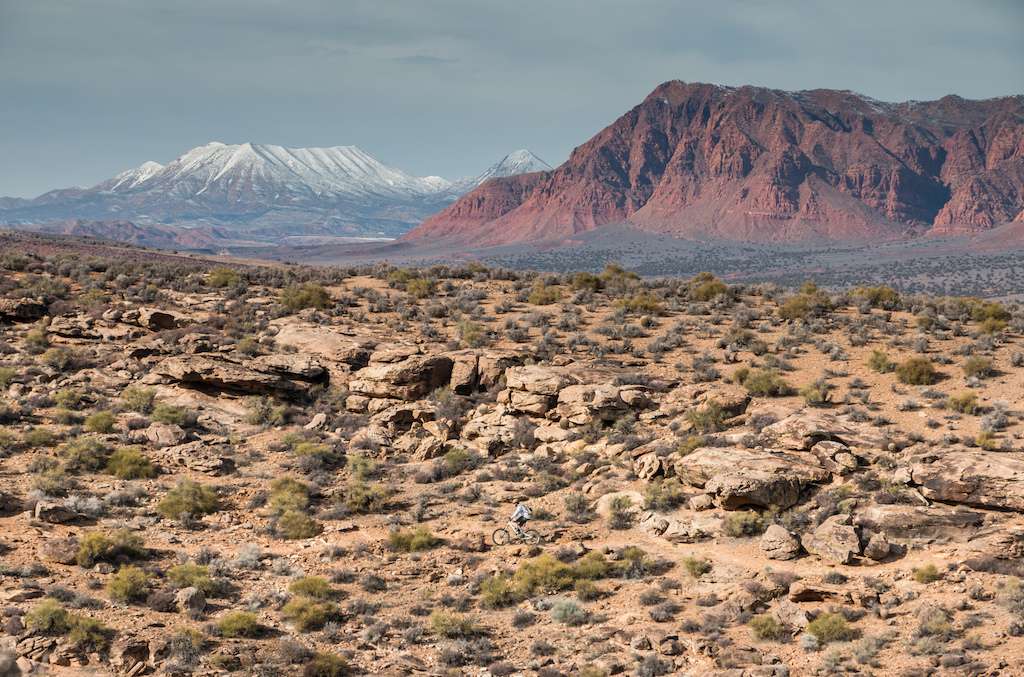 In the days leading up to our St. George trip, we had heard mixed reviews on the conditions for the Hurricane Rim loop, so we decided to check it out for ourselves. We parked at the far western lot just off highway 59, and began the ride around 10:00 in the morning. After climbing the 1-2 mile dirt road, we hit Goulds Rim... all was well. 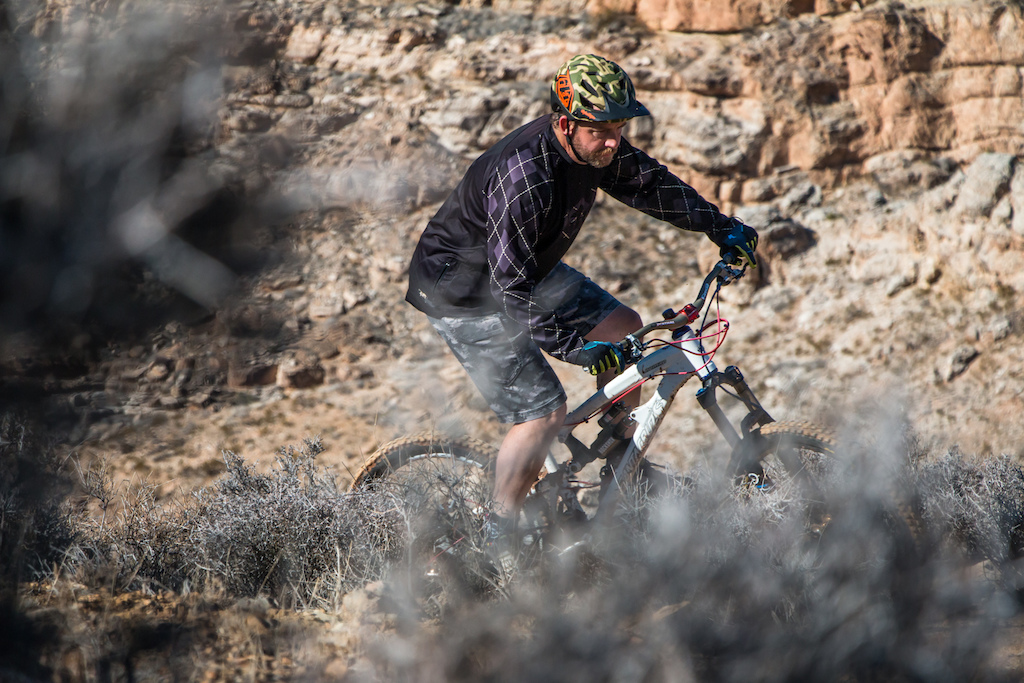 Heading east on Goulds, we were mostly in good spirits because while soft, the trail was still rideable. However, as we finished Goulds and headed north on the dirt road towards JEM, our feelings quickly changed. 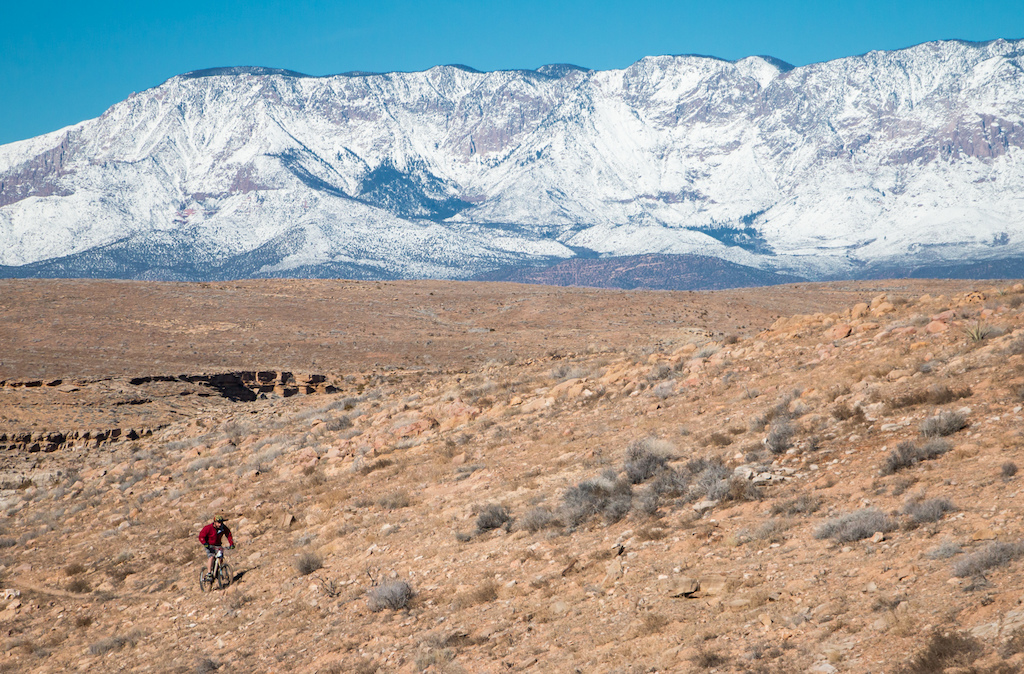 Once we saw the JEM trail, we made a no-brainer decision to cut our ride short (about 15-miles including the highway ride back to the car), minimize our losses, and head elsewhere. 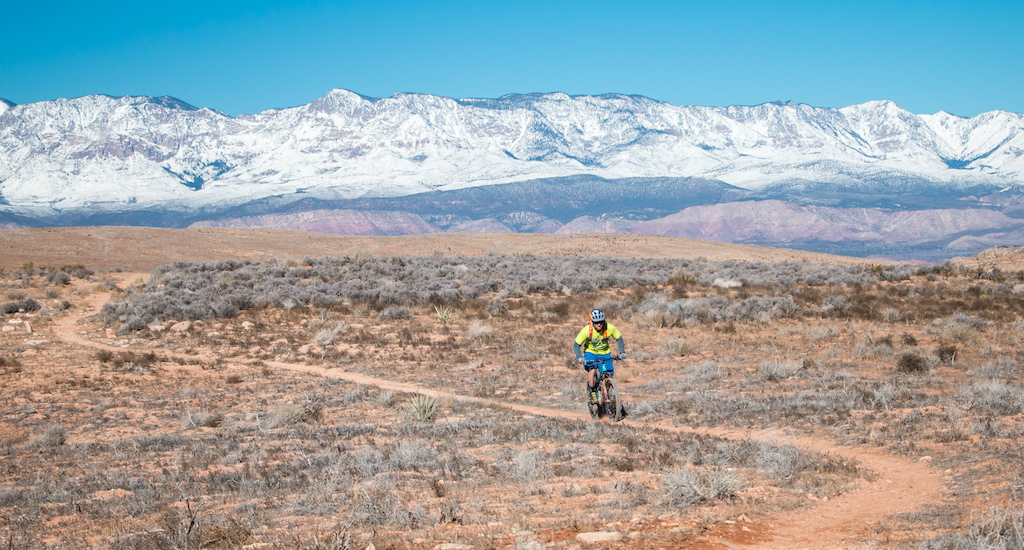 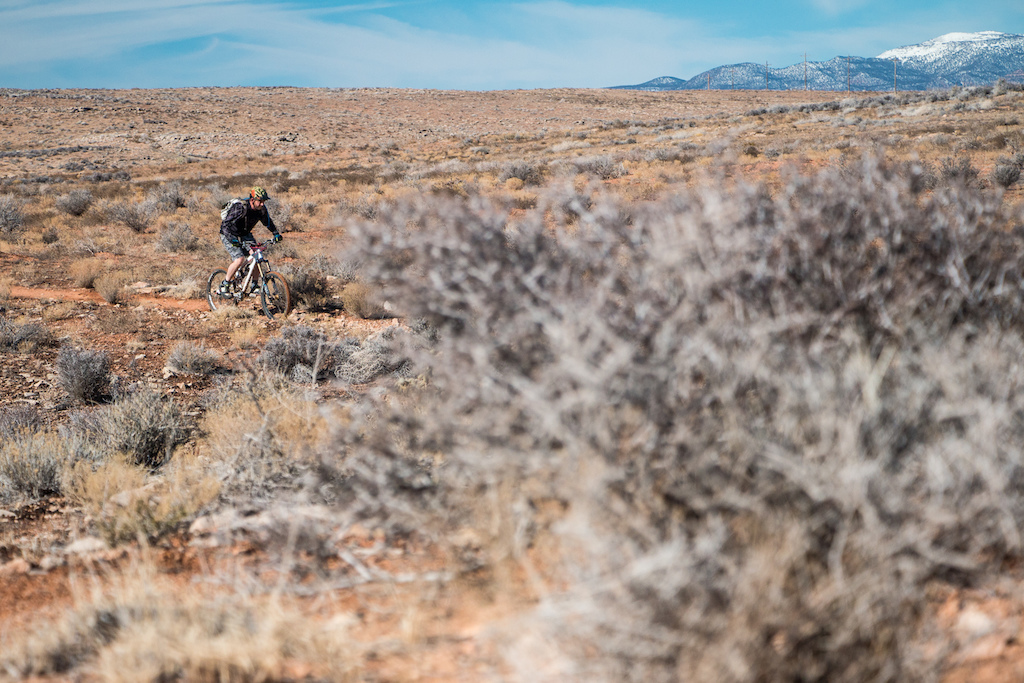 After cleaning off our bikes at the do-it-yourself car wash in Hurricane, we grabbed a bite to eat and made our way over to the Boy Scout Loops, on the west side of town. These loops were designed and built by the crew at Over the Edge, and they're a great addition to the local trail options. 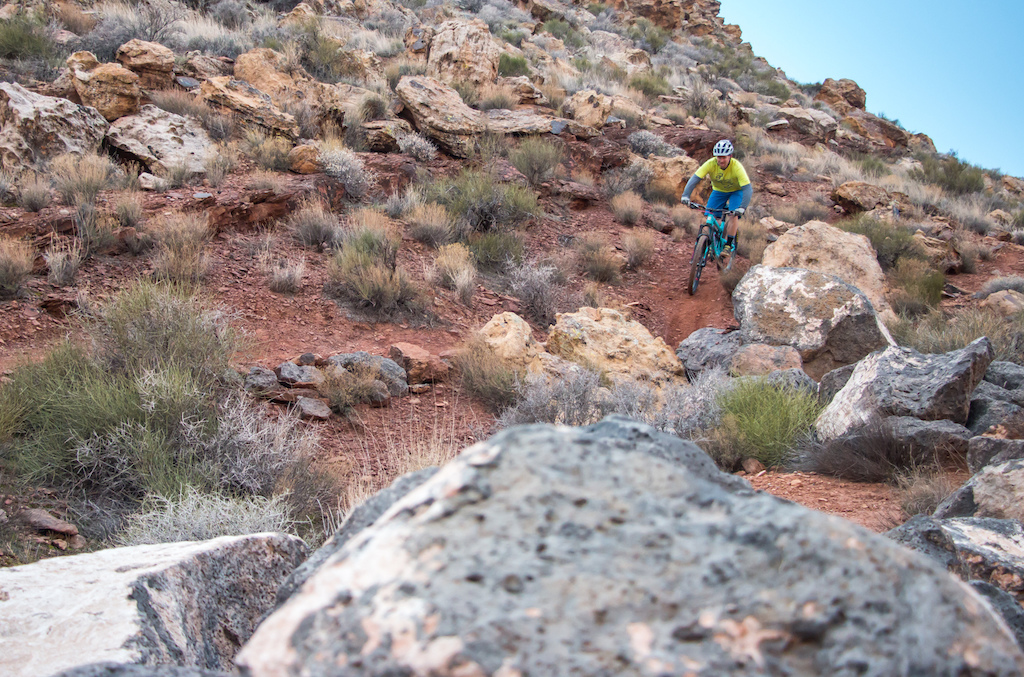 The layout of the loops is such that you can pick your ride length - and your poison, by the number of loops you choose to ride. The rides are fairly technical in nature, with quick punchy climbs followed by short bursts of downhill; a nice contrast to the smooth trail of Hurricane Rim. 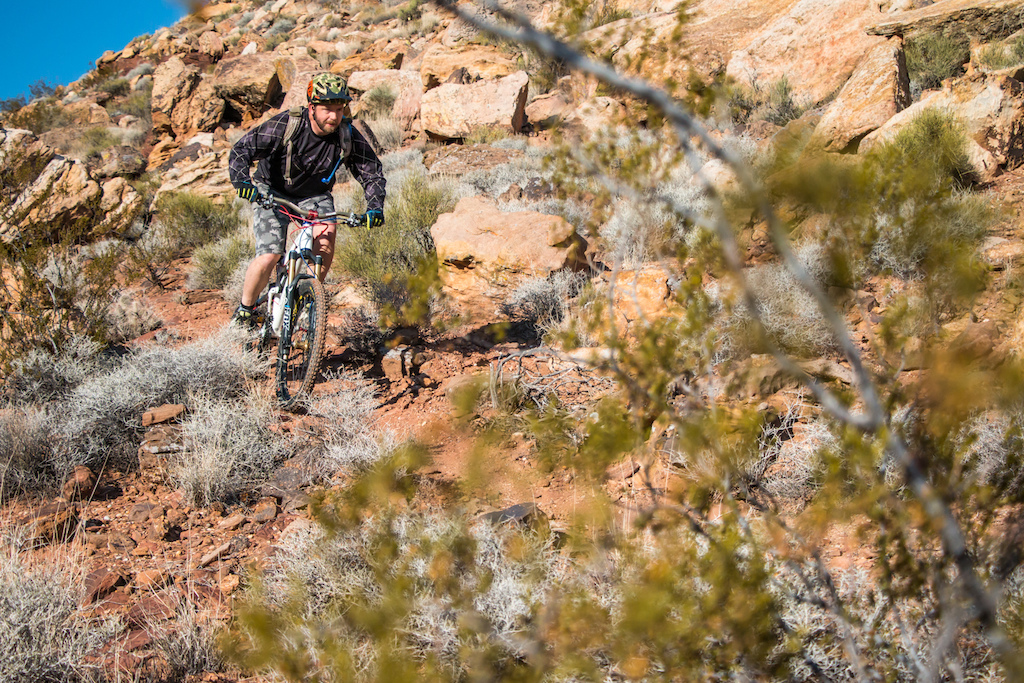 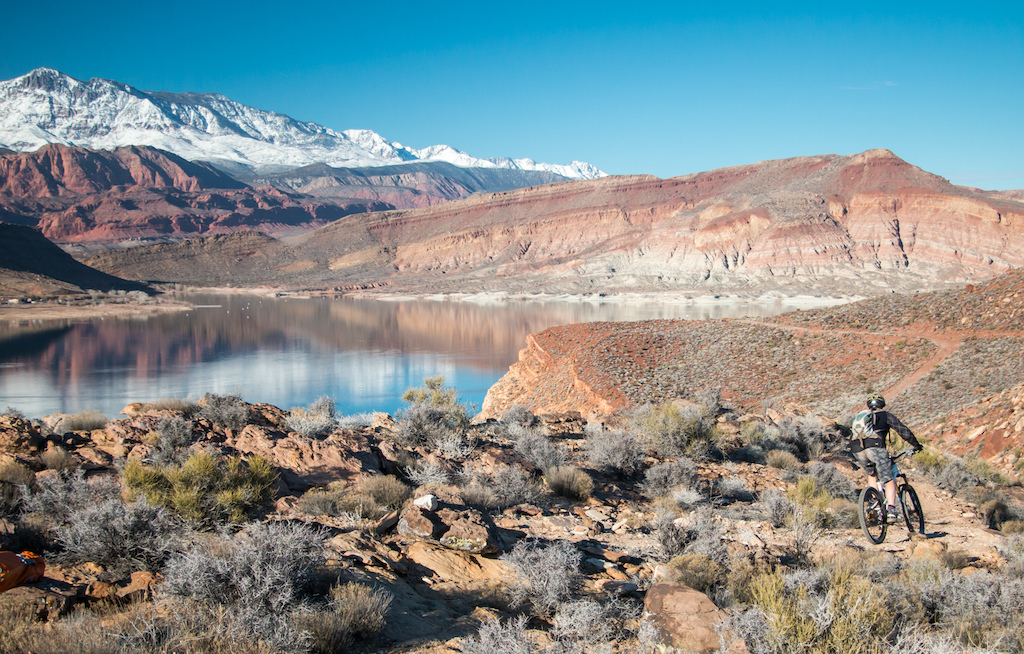 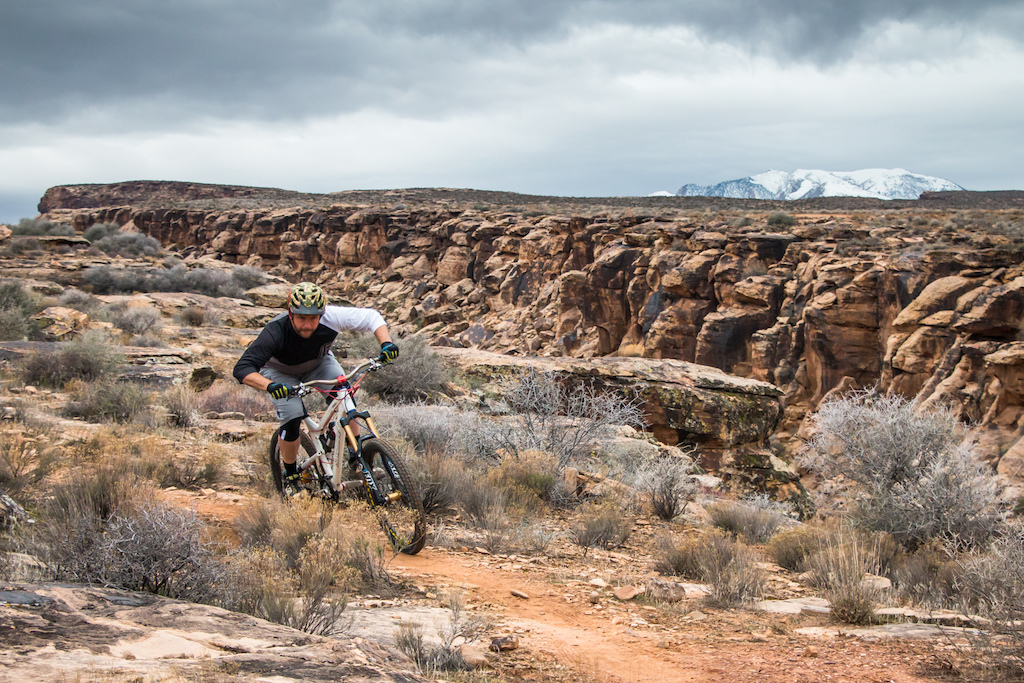 The third day was our 'getaway day', so we had to keep the ride short and sweet... and we managed to do that perfectly with a quick loop around Zen.
This trail is known for being one of the more fun in the area, and it's well-deserved. The Zen Trail has a great mix of flowy singletrack, technical rock sections, sustained downhills, and incredible rock formations. If I was a St. George local, I'd be a regular on the Zen trail. 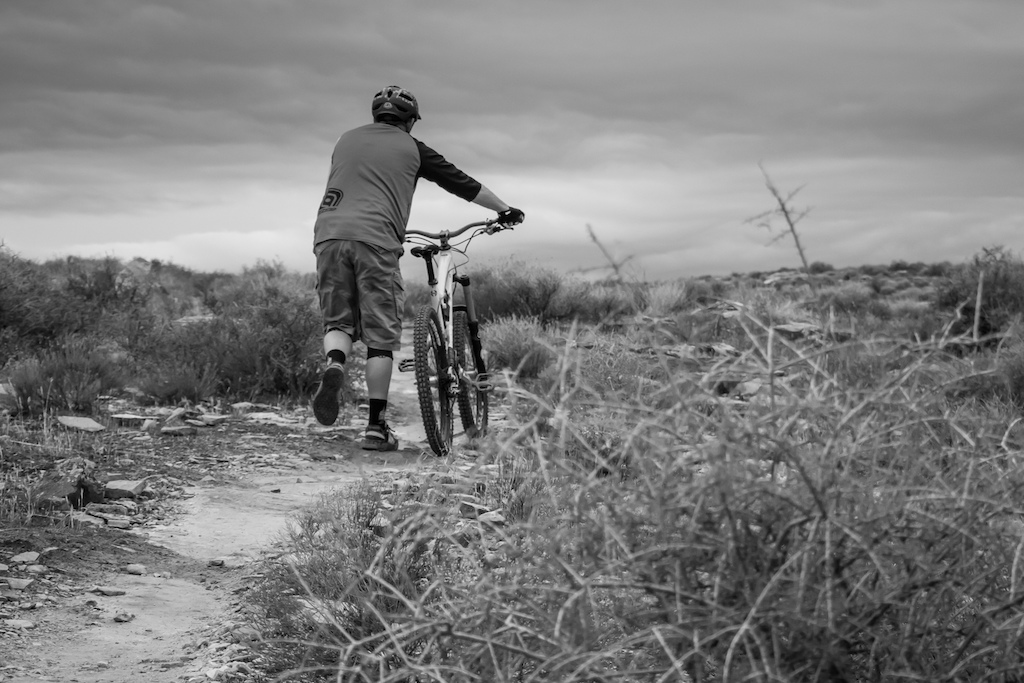 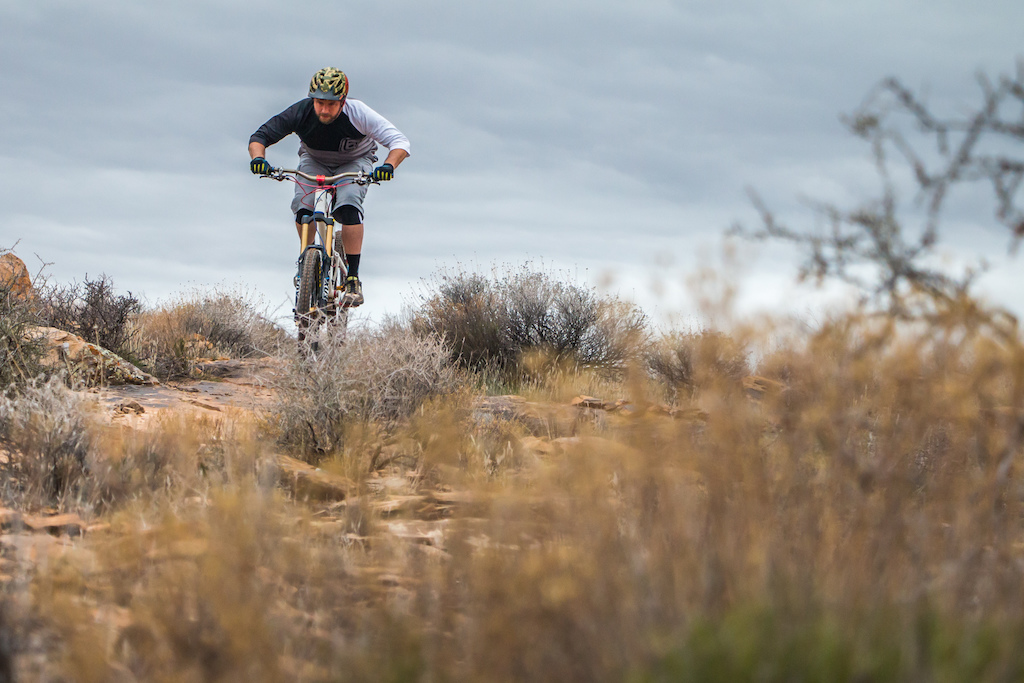 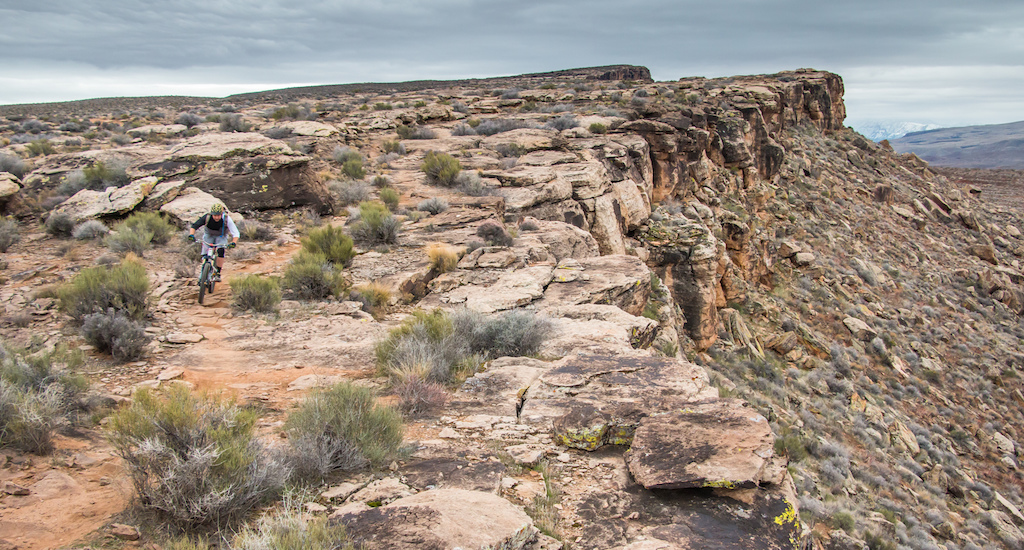 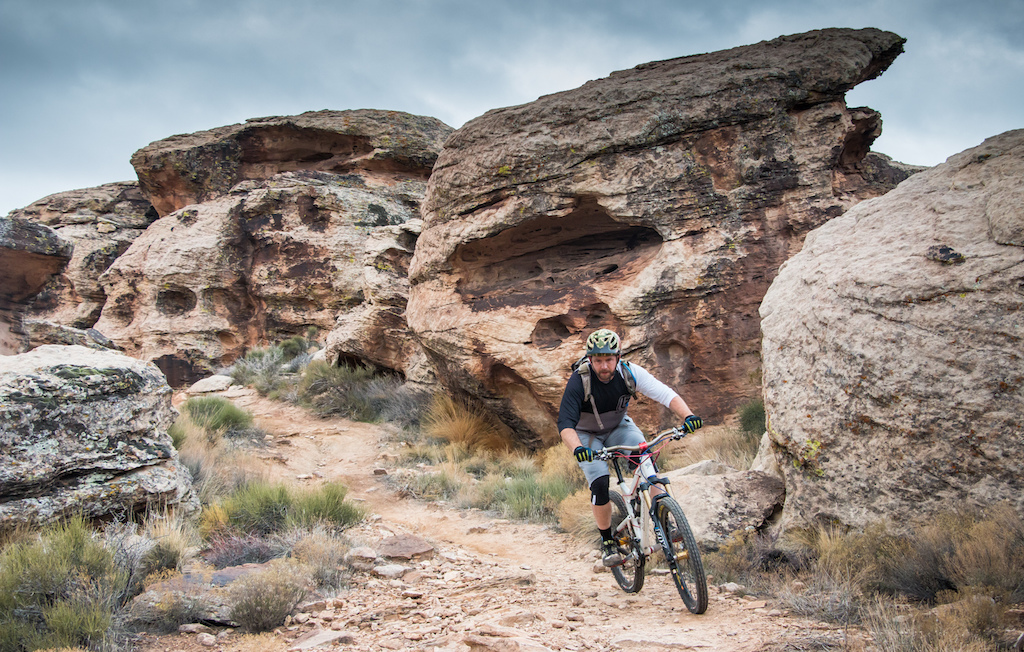 So considering the trail conditions at home in Boulder, even though we weren't able to ride the 'bucket list' rides of St. George, it was a highly successful trip. Besides, now we'll have something to come back for in a couple of months.

UtahBikeMike (Jan 21, 2016 at 9:38)
Just so people that don't live in Utah reading this know, "hurricane" is properly pronounced as "hurrikin". It's pretty important to know this when asking directions.

scott-townes (Jan 21, 2016 at 17:16)
And sale is pronounced "sell". Ah crazy Utahns... amazing pictures by the way. It looked like such an epic trip despite not riding all the trails you were aiming to.

Twallywilly (Jan 21, 2016 at 18:17)
Don't forget the "Mountain" and "Moun'en" mixup that happens every day. Mostly from me. I am headed south for 4 trips in February alone. So grateful to be able to ski pow and ride dirt in the same day. Utah is a good place to be.

UtahBikeMike (Jan 21, 2016 at 18:35)
'Sploded my fatbike hub and am waiting on parts. Was talking to my wife this last weekend about doing a day trip down there since I couldn't ride. Thinking this weekend but i can't decide if i want to do stg, moab or gooseberry

Thanks for the heads up

mesabigwheel (Jan 21, 2016 at 14:31)
The write up is great, thank you for choosing to be smart and cut out when you encountered a muddy JEM trail. Come back out and check out Little Creek with the crew from Over The Edge Sports.

slimjim4 (Jan 21, 2016 at 21:37)
Is Little Creek accessible right now? I'd just assumed that the roads getting back there and to Gooseberry would be thick with tacky mud. Heard reports last weekend of the road getting to Guac being nasty in the usual spot.

wasea04 (Jan 22, 2016 at 13:43)
I appreciate OTE and other local shops being mindful of the trails, being a riding destinations means most guys, thankful to the article guys for not doing this, are going to ride no matter what, including destroying trails and ecology.

E-ROG (Jan 22, 2016 at 22:49)
Yeah great write up. I'm in Moab UT right now. Amasa Back Trails are clear and riding well. Riding them again tomorrow. If you need info on trail conditions in Moab I called the guys at Poison Spyder and they literally knew EXACTLY the daily conditions of all trails in the area. Thank you Poison Spyder team.

Reignonme (Jan 25, 2016 at 8:55)
Poison Spider is probably the best shop in the west (never been past CO so I can't compare). Love those guys. @wasea04 the problem is 10-15 years ago we had all those trails to ourselves--and maintained them ourselves. Getting to gooseberry was an adventure in and of itself. Now, OTE Hurricane is in bike mag write ups with heli shots, putting out videos, etc. advertising riders to come to St. George. I'm TOTALLY fine with this. Gooseberry now has a 40 car parking lot with a 4 star bathroom. If you are going to advertise to riders to come from all over to ride your trails cus they are soooo good, spend their cash at your shop, etc, have some decency when they "risk it" and head out to gooseberry and trash the road don't post all over FB how bad you hate Salt Lakers, Canadians, tourists, etc because they have no respect for trails. If you prostitute yourself out there, and I drive over 500 miles to get there... I'm probably gonna ride.

savage47 (Jan 22, 2016 at 14:51)
I get down there a few times a winter. And they are Nazi's about riding the trails wet. Almost in a fist fight 2 years ago with some asshole who have to give his opinion about me riding wet trail. Come to find out he worked at Over The Edge!!

wasea04 (Jan 22, 2016 at 21:44)
You're proving a point Savage, unfortunately not that others are being unreasonable jerks, but that you are. Trails don't build and maintain themselves, people do those things, usually local people with a vested interest in keeping trails fun and open. I think it's pretty hilarious my comment lower on down the page was negative prop'd for sharing appreciation for OTE helping to protect local trails. The trails here are mostly a clay base, meaning that the ruts don't refill like loam or other soil types, the ruts become permanent reminders of irresponsibility. Not to mention the land managers will shut trails down if they are not respected, who's being an @$$ again, it's you!

geerumm (Jan 22, 2016 at 22:38)
It's a surfer mentality out here dude. Who do you think builds and maintains these trails? The locals. Now if we could only get those equestrian folks to keep off the rampage sites...

savage47 (Jan 23, 2016 at 0:54)
I maintain them in my town to. And I understand. But I don't need dickheads telling me about it! And telling me to go ride somewhere else.Besides I think sidewalk wide trails with no rocks or ruts are fucking boring!!

UtahBikeMike (Jan 23, 2016 at 9:13)
I drive 5 hours to ride there too, dickhead. All it takes is a small amount of planning and checking local weather or forums for trail conditions. I bet you're one of the people that thinks it's ok to shuttle rush or draper dh when it's muddy in spots and then I get to ride it all rutted out for the next 3 months because of your one weekend of fun.

takeiteasyridehard (Jan 23, 2016 at 12:28)
Welcome to Utah, now go home! I wish you got that message. Its your poor planning if you pick the 5% of the time it's mud to try and ride. Use your smartphone, cuz you're pretty dumb.

Reignonme (Jan 25, 2016 at 9:03)
I think the point has been missed by all. No one is saying we don't appreciate OTE and what they do. It's HOW they do it. Plain and simple. But to each their own. I can't believe that Corner Canyon was invoked in this thread. The crown jewel of trail damage and trail widening. Tragic.

wasea04 (Jan 25, 2016 at 15:21)
Reignonme, Ok, fair point, consider the knee jerk reaction through the lens of having our trails destroyed many times over. Perhaps we're all little on edge...not a bad point or pun both

WasatchGT (Jan 21, 2016 at 13:17)
Great article. There is so much amazing riding in the St. George area and its often overlooked as Moab is a couple hours away.

stevemokan (Jan 24, 2016 at 12:25)
Unfortunately not because we were short on time on the last day, but we'll be back in a couple of months and it's on the list for sure.