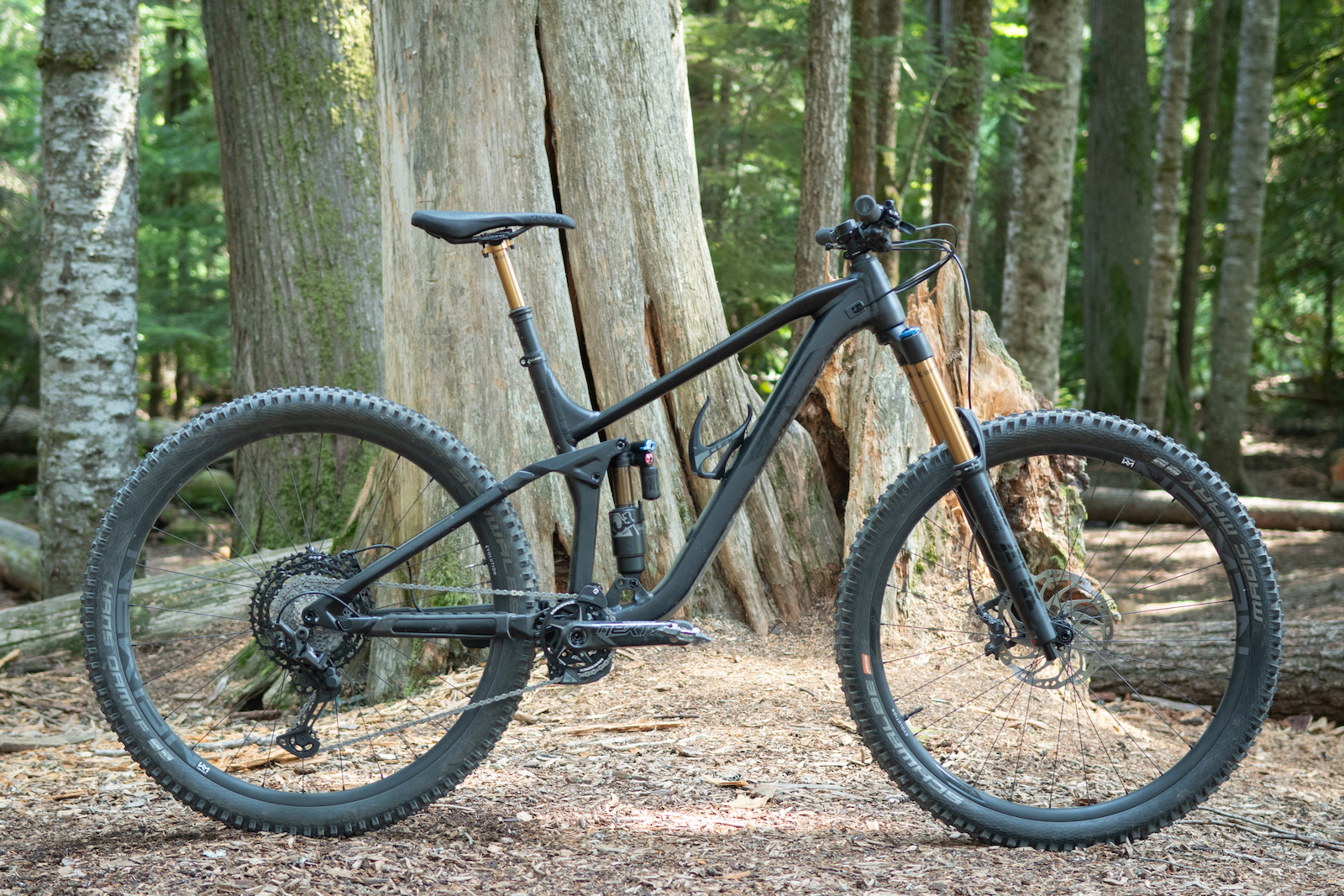 WORDS & PHOTOS: Mike Kazimer
170 seems to be a hot number these days, at least when it comes to the amount of rear travel on the latest batch of big wheelers. The Cube Stereo 170 is a new addition to this rapidly growing category, an aluminum 29er that's billed as a “mountain flattening machine.”

There are three complete bikes available, all with 29” wheels and all with aluminum frames. The Stereo 170 SL 29 shown here comes with a 170mm Fox 36 Factory fork, a Float X2 shock, Shimano XT 12-speed drivetrain and 4-piston brakes, and a Newman Evolution aluminum wheelset shod with a Schwalbe Magic Mary up front and a Hans Dampf in the rear. It retails for $6,999 CAD.

The most affordable Stereo 170 is the $4,899 CAD Race 29 model, which has a Fox DPX2 shock, Fox 36 Float Grip fork, SRAM GX drivetrain and Code R brakes, along with a Newman Evolution wheelset and a Maxxis Assegai / Minion DHR II tire combo. 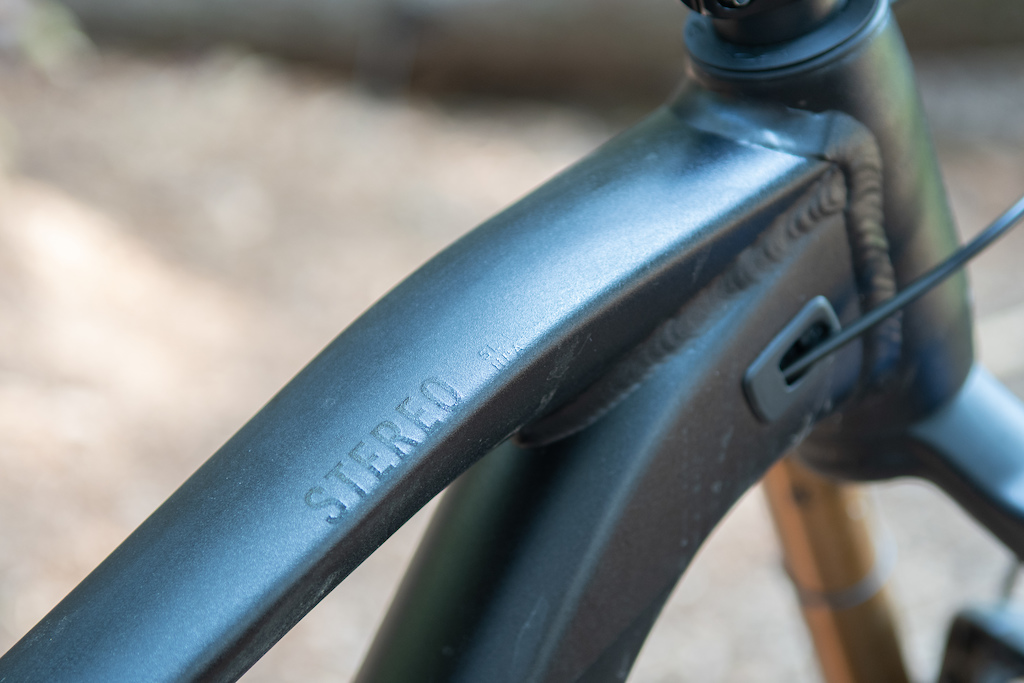 The Stereo 170 is constructed from hydroformed 7005 series aluminum (there's no carbon version, at least not yet) with an anodized finish on the SL version pictured here that should help it withstand the inevitable scrapes and scuffs. 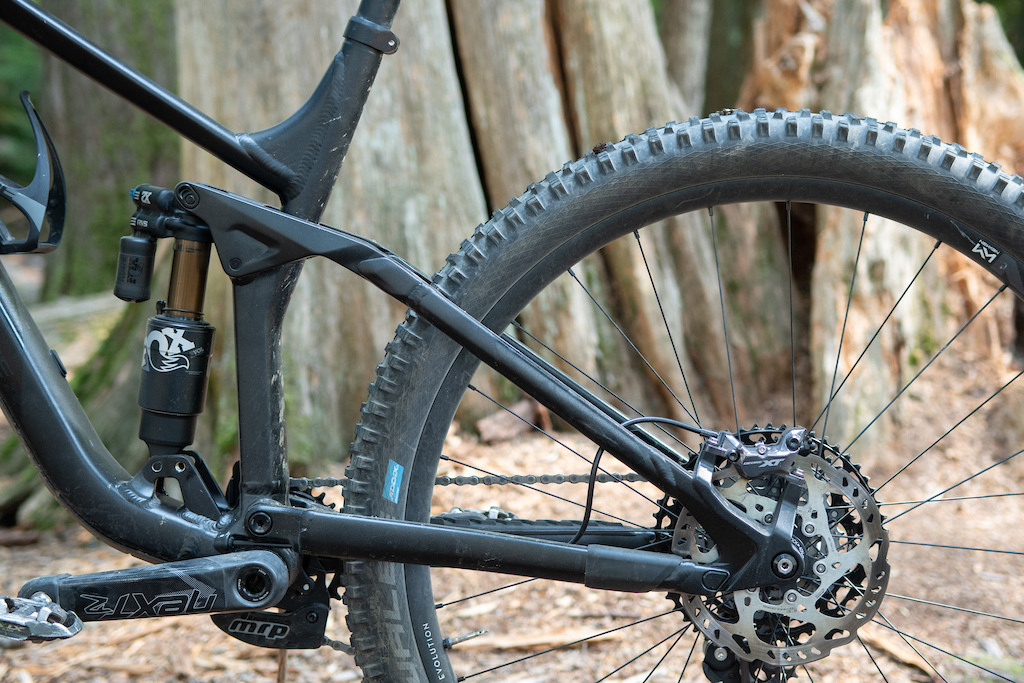 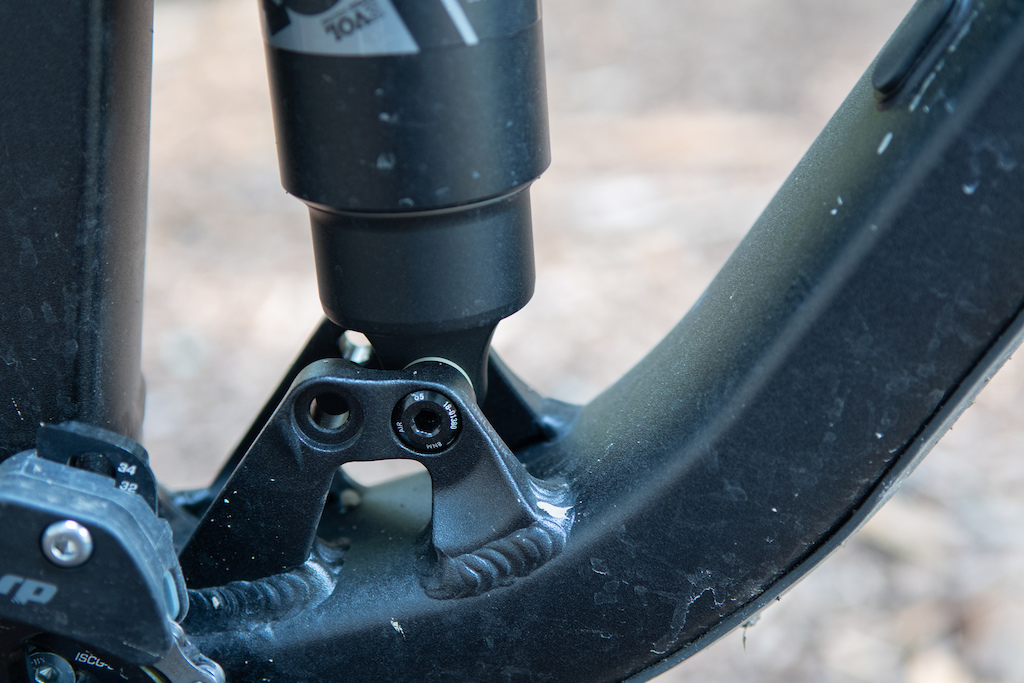 There are separate mounting positions depending on whether an air or coil shock is used.
It's the two shock positions that differentiate the Stereo 170 from its contemporaries. Having multiple geometry settings on a frame is fairly common, but that's not what those two mounting positions are for. Instead, one position is for use with a coil shock, and the other for an air shock. The different positions and shock stroke lengths (230 x 65mm for coil and 230 x 62.5mm for air) are meant to create the desired suspension characteristics for each shock. In the coil shock position, the bike has a much more progressive leverage ratio curve to keep it from bottoming out too easily.

All of the bikes in the lineup are spec'd with a chain guide and bash guard, and they can all hold a water bottle inside the front triangle. 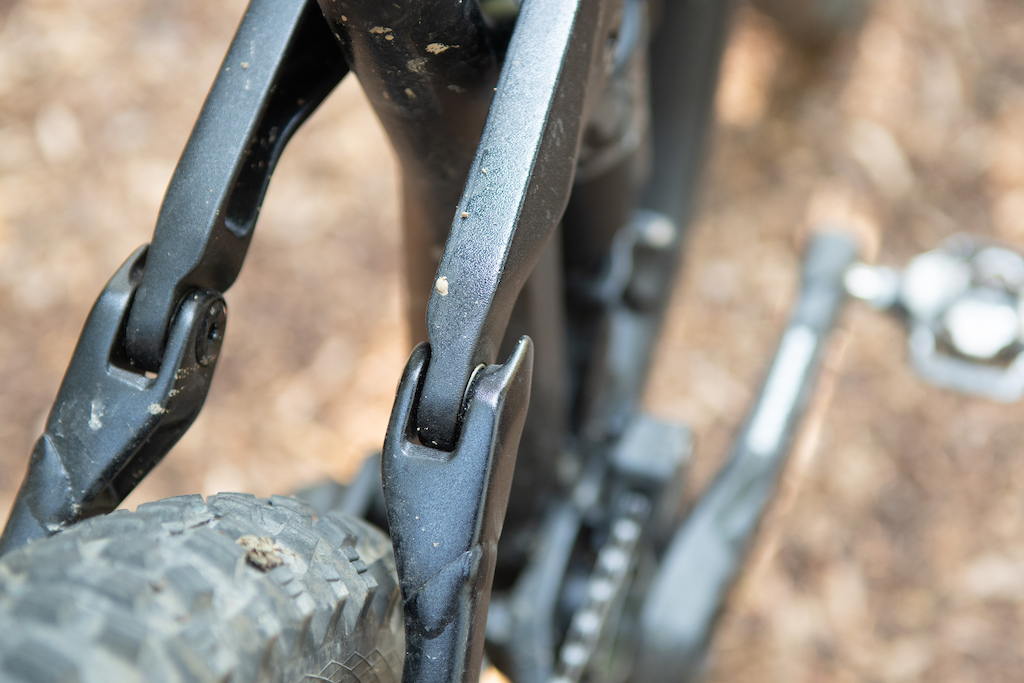 There's room for wide tires, although I'm not sure about that pokey bit on the seatstays. 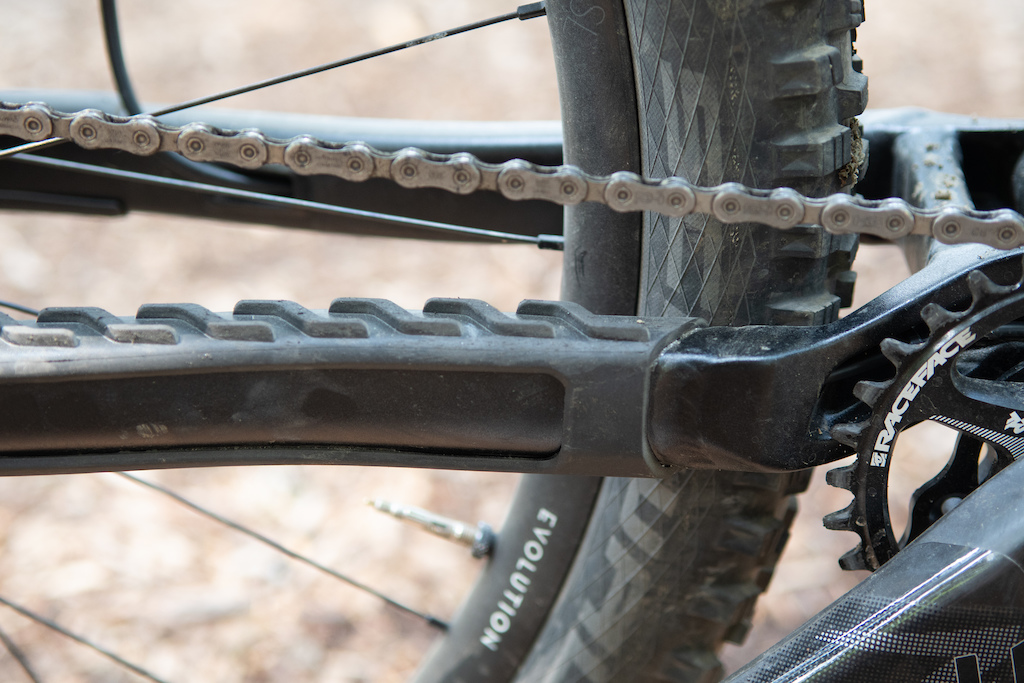 A ribbed chainstay protector helps keeps things quiet, but I'd recommend adding some mastic tape on the part that's not covered - the chain can hit there too.

The head angle can be altered by .6 degrees by rotating the Across headset cups 180-degrees. The Stereo SL 29 that I rode comes with the cups in the steeper setting, giving the bike a 65-degree head angle out of the box.

Seat tube lengths have been falling over the last few years as longer and longer dropper posts become the norm, but Cube's numbers are still on the longer side, measuring 420, 470, and 520mm for the three sizes. The effective seat tube angle sits at a relatively steep 76.5 degrees. 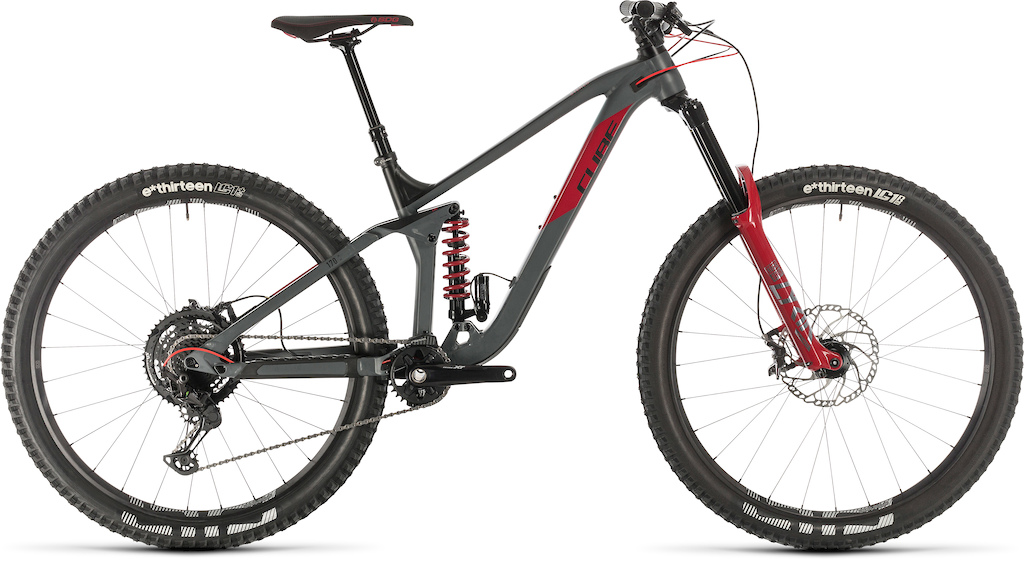 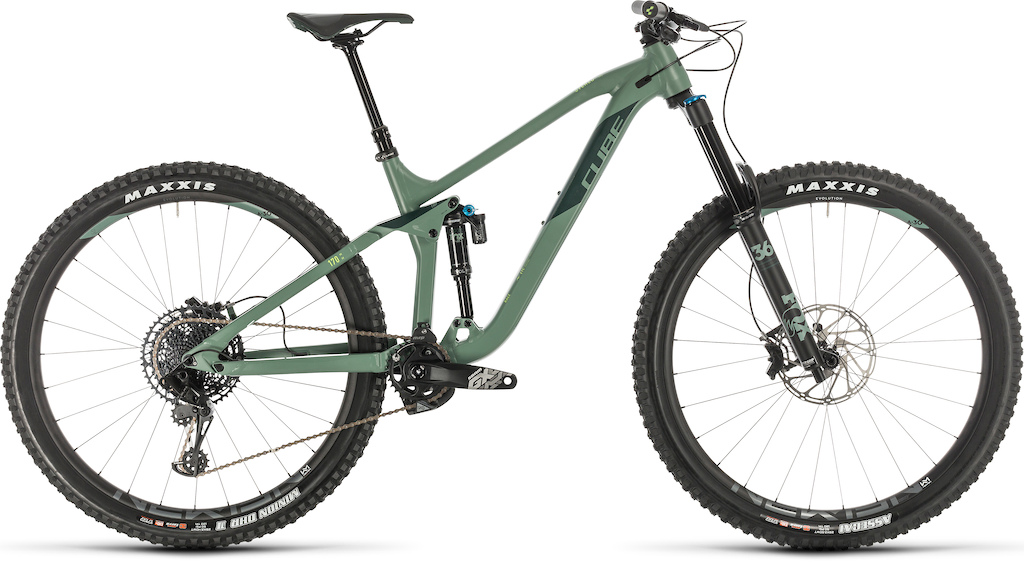 I was able to sneak away from the hustle and bustle of Crankworx Whistler to get a lap on the Cube Stereo 170 SL outside of the confines of the bike park. The ride started with a moderately steep fireroad climb, followed by some rooty singletrack made extra tricky by the recent rain, and then finished with a steep rock and root filled slice of trail perfection.

That ride also happened to be a ride that I recently did on the new Specialized Enduro, which also has 29” wheels and 170mm of travel. Those numbers may be the same, but the bikes have very different handling characteristics. The Stereo 170 felt closer to a long travel trail bike, while the Enduro sits much closer to the downhill side of the spectrum.

The Stereo was easy to lift up and over obstacles, and navigate around tight turns, but it didn't seem to have the same level of 'plowability' that the Enduro does. I had to concentrate a little more to stay on line when things got really rough, rather than just dropping my heals and turning off my brain. Keep in mind that I'd been on an S4 Enduro, which has a reach of 487mm and a wheelbase of 1274mm, compared to the 20” Stereo's 464mm reach and 1237mm reach – those number likely played apart in the difference in stability I was noticing.

The thing is, not all longer travel 29ers need to be mini-DH bikes. There's something to be said for more maneuverable, more versatile bikes with some extra travel to take the sting off those really rough sections of trail, which is the category the Stereo 170 SL seems to fall into, at least based on my initial ride impressions.

Visit the high-res gallery for more images from this article.

generationfourth (Aug 15, 2019 at 9:50)
The different mounts for differing progression for coil/air is genius. I expect to see this in longer travel bikes in the future. Whenever I see a pit shot of a test mule with a few different mount options I get insanely jealous.

hamncheez (Aug 15, 2019 at 10:42)
Its been on many other bikes in the past (like the GG bikes) but never marketed effectively. This, with a single sentence from one pb editor, is the real genius.

generationfourth (Aug 15, 2019 at 11:46)
@hamncheez: true, usually it's under the guise of a flip chip (which most of us have an aversion to) and called something abstract like "Crush/Plush". And on some of the previous GG models it did affect the geo. Just clearly call it "linear/progressive" or in this case "coil/air" and don't mess with the geo.

Scottybike36 (Aug 15, 2019 at 10:05)
Finally Cube has started making bikes that don’t look hideous. The last couple of years have seen a long overdue transformation in design on Cube mountain bikes.

samdeatley (Aug 15, 2019 at 9:51)
i have a hard time differentiating this and the trek right above it on the home page

banffowen (Aug 15, 2019 at 10:26)
Who takes care of Canadian / North American sales and support for Cube? Asking for a friend... who whispers in my ear from my shoulder saying I need more bikes no matter how many I get.

@mikekazimer : Does it feel a lot like the current gen Enduro? As that's my experience with the current bike.

With advances in suspension technology, new materials, and an acceptance of new geometry and ideas, we’re seeing the rear travel numbers on aggressive enduro/trail bikes inch their way up literally, and I couldn’t be happier!,

bishopsmike (Aug 15, 2019 at 9:52)
Less than zero interest in this bike, but the different mounting option for air vs. coil is genius.

Ttimer (Aug 16, 2019 at 6:49)
Care to elaborate a little more on the suspension and on the bike in general? More on the plush side or very progressive?

How does it climb, especially compared to the Enduro?

Tonig (Aug 19, 2019 at 0:27)
Everybody is complaining about the "to long" and "old school" Seat tube lengths. I have very long legs, I see no disadvantage for me, I am fine with the 520mm plus 170mm dropper post length to pedal uphill an efficient way.

telephunke (Aug 15, 2019 at 10:51)
WTF is up with the saddle position. Seems to me that's a common problem with plenty of these steeper seat angled bikes.

mikekazimer Mod Plus (Aug 15, 2019 at 11:00)
That was how the rider before me had it. I slid it forward into a more normal position for my ride and didn’t have any issues.

jorgeposada (Aug 15, 2019 at 23:59)
@Isey: Ummmm Hi hahaha. Sooo 3 new bikes , some with multiple wheel size options, others not, some carbon only, others not, same design essentially but somehow the Ransom comes in at a much lighter weight, wheel size and material options. Can I expand further for you please.

Fits the stereotype of a Swiss bike enthusiast.

No offense Brendan,Dean and the freeride legends... you get paid to ride them

markg1150 (Aug 15, 2019 at 21:12)
Having loads of travel to bail you out of the trouble the geo got you in seems daft to me. I'd take a modern geo hartail over a old school bike with suspension any day. And I'm in no way a hardtail fanboy

Ttimer (Aug 16, 2019 at 6:40)
Better than not having the travel to cope with the speeds that the geo needs to work well. Particularly if you are not keen on crashing.

JohanG (Aug 16, 2019 at 11:17)
I've spent a lot of time on their 2017 stereo 160 with the old school geo. My only complaint is the high top tube; otherwise it's an awesome bike not just for the downs but pedalling and tech climbing it's just ace. The short reach has its advantages.

Ttimer (Aug 16, 2019 at 6:46)
Compared to the new Spec Enduro this bike is a total bargain with amazing spec at any pricepoint.

trollhunter (Aug 15, 2019 at 16:19)
Appears to a rip off of the transition GEO numbers and frame design. Transition bikes needs to sue this copy cat company.

pargolf8 (Aug 15, 2019 at 17:06)
Not sure you could claim a lawsuit based on geo numbers. That said, I’ll probably never buy anything but a tranny again