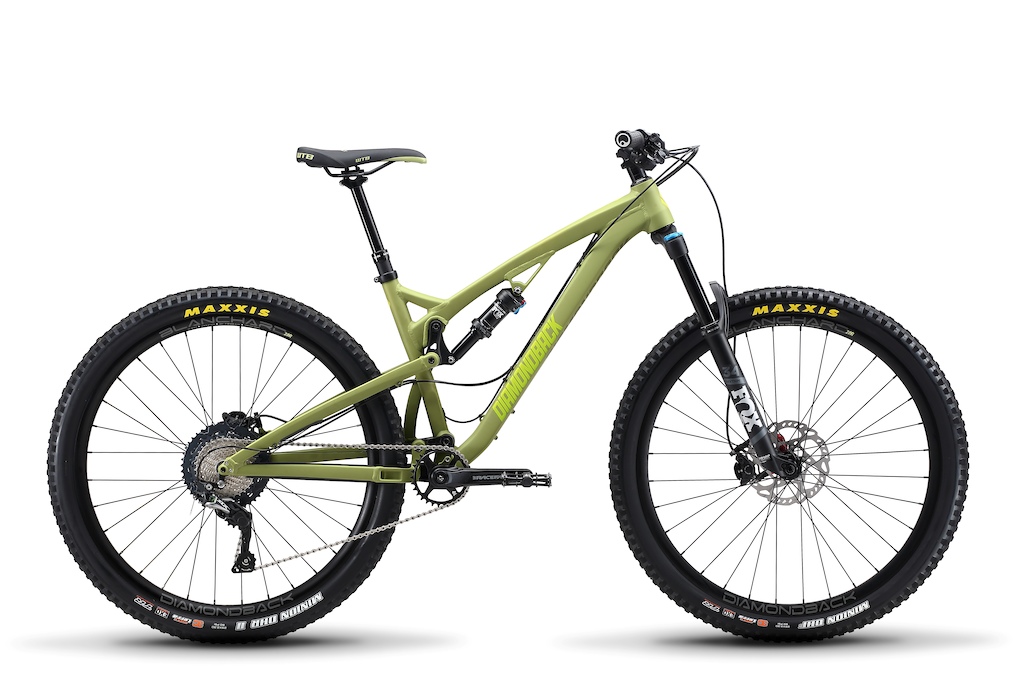 For 2019, Diamondback have added a 29" model of the Release to their lineup. The bike has 130mm of travel paired with a 140mm fork, and uses the same Level Link suspension platform found on the 27.5" version, with both wheel sizes sharing a similar shock tune and kinematics. It is available in two build options - the Release 2 is $2,700, and the Release 3 is $3,300 USD.

It's made to be a well-rounded trail bike, not an enduro race bike. The theory behind the parts spec was that at whatever pricepoint the bike was bought at, the buyer wouldn't feel the need to instantly change out components. Even the pedals - aluminum with replaceable pins - are set to make the bike able to be ridden hard out of the box. The bike even comes with a shock pump and valve cores for setting it up tubeless. 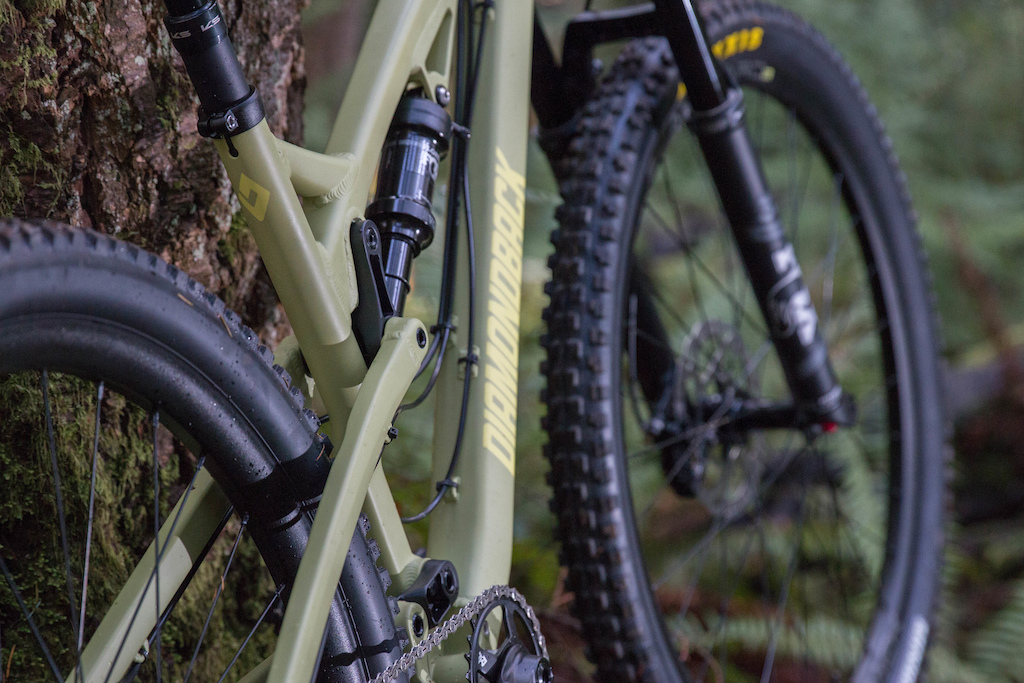 Diamondback's Level Link suspension system is a dual short link design that keeps the chain level with the chainstay as the suspension moves through its travel.

The Release 29 has a 67.7-degree head angle and a 73-degree seat angle. Chainstays are 446mm and the reach is 427mm on a size medium. Those numbers are quite conservative, but team rider Eric Porter says that they weren't trying to push the boundaries with the geometry; instead, they were trying to make a fun bike that they enjoyed riding, something more versatile than an enduro race bike.

There are two different build options for the Release 29, both chosen to be durable and budget-friendly. The higher end Release 3 is priced at $3,300. The bike comes with a Fox Performance Float DPX2 EVOL rear shock, Performance Float 34 Grip 3 fork, RaceFace Turbine cranks, Shimano XT 11-speed drivetrain, XT brakes, a 35mm alloy handlebar, and KS Lev SI dropper post. The size small bike's post has 125mm of travel and while the other sizes have 150mm. 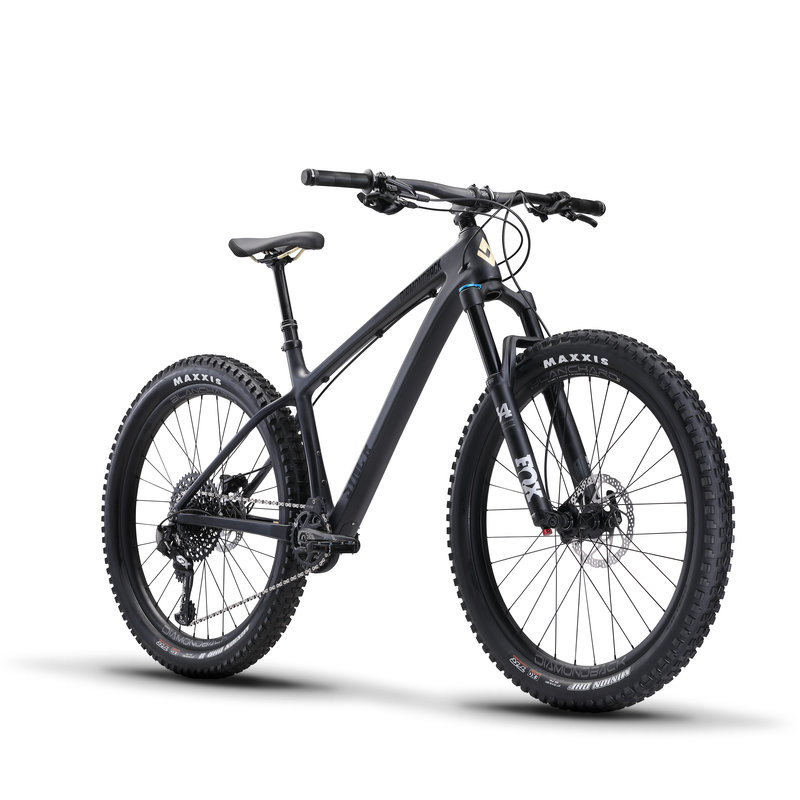 The Sync'r Carbon is Diamondback's carbon hardtail, something that product managers and rider Eric Porter, among others, have been pushing for. It's a 27.5+ wheeled design to give the comfort and traction benefits of that tire size, but it can also be set up as a 29er. There has been an aluminum 27.5" Sync'r in Diamondback's line for a few years as part of Diamondback's "Hook, Line, and Sync'r" trail hardtails, but the new carbon version is updated and made to be a little more shreddable.

The Sync'r is designed around a 140mm fork, which gives it a 66-degree head angle. There are chainguide mounts, multiple water bottle mount bosses, and a threaded bottom bracket. Cable routing is all internal except for the brake; to make brake swaps simple and easy and there are guides to keep cable rattle to a minimum.

According to Eric Porter, versatility was the goal behind the design of the Sync'r Carbon. Some people may want it as their only bike, others may set it up as their bikepacking bike, or use it as a race bike. Porter rides his as a 29er most of the time, and takes it on everything from gravel roads to the bike park trails at Deer Valley. 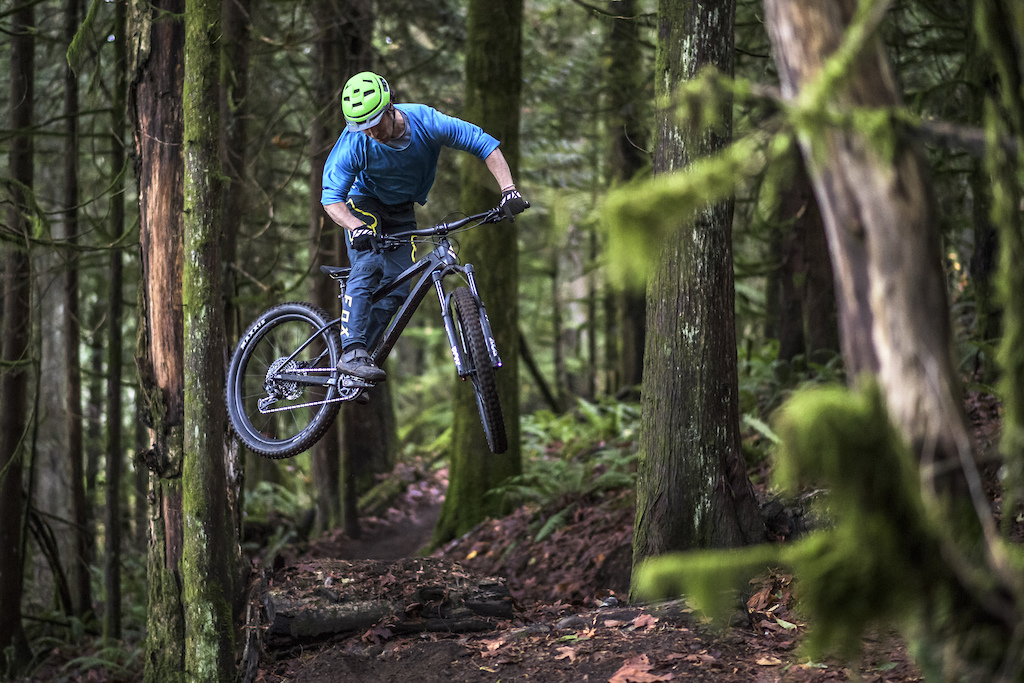 The Sync'r Carbon has a 66-degree head angle and a 438mm reach for a size medium. The chainstays are 435mm long.

There is only one build option for the Sync'r Carbon, which retails for $3,000. The bike has a Fox 34 Float Fit 3 fork, SRAM's GX Eagle drivetrain, and Truvativ Descendant 6k cranks. There is an X-fusion Manic dropper post and Shimano MT 501 brakes. The bike is shod with 2.8" Maxxis Minion DHF/DHR tires. 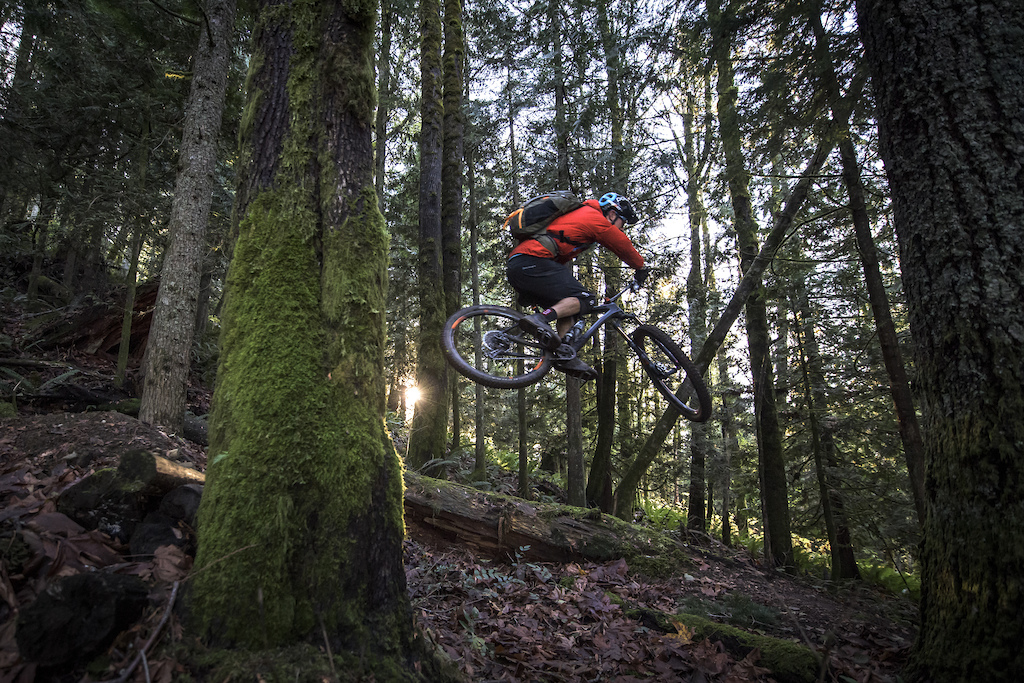 jdeuce (Mar 8, 2019 at 22:49)
why does the hardtail have much better geo than the fs? it makes no sense. Maybe they feel the need to make a fs 29r just because, but they really prefer that people buy the syncr carbon 29r. I'd rather have the syncr everyday, twice on sunday.

mhoshal (Mar 9, 2019 at 15:52)
It says its a trail bike not an enduro. I love when bikes get released and everyone starts comparing geos to enduros when they are clearly two different style of bikes.

chrisclifford (Mar 9, 2019 at 17:27) (Below Threshold)
@mhoshal: Enduro is not a type of bike. Enduro is a race format raced primarily on trail bikes.

bemery (Mar 10, 2019 at 13:48)
It's at least worth noting that on a hardtail, the head angle can only get steeper while riding, at it'll almost always be steeper when you're riding on the trail. That's not true for FS, so it does make sense for the hardtail to be a bit slacker.

stiingya (Mar 8, 2019 at 23:06)
Well that's just a shame... The Sinc'er looks like a very nice ride. The Release... would have sold a ton if it was released 5 years ago. I get staying conservative, but it should at least be current geo.

Guess they are about to drop a new Mission and want clear deliniation? Missed oportunity to gain marketshare.

stiingya (Mar 9, 2019 at 21:03)
@mhoshal: XC bikes have modern geo, doesn't make em Enduro bikes.
If it had the SA and HA from that hard tail while retaining the same reach numbers it would have been both conservative and modern Geo. Seems pretty obvious and easy. Why DB missed the chance to sell tons of these is beyond me.

blackthorne (Mar 9, 2019 at 23:49)
The Sync’r almost has it—but misses the boat again with long chainstays and lack of interesting features like extra bottle/rack cages. See SC Chameleon, Kona Honzo, and Chromag for how to make fun hard tails.

Still think, especially with aluminum frame that can be altered without breaking the bank that they should have touched up the 29er Release too.

mhoshal (Mar 9, 2019 at 16:09) (Below Threshold)
@ozak42 did you read the part where it says its a trail bike and not an enduro so why are all you idiots on here saying the geo is off when it is pretty much spot on for a trail bike? I have to question whether any of you dummys know the difference these days.

I personally wouldn't trade my altitude for anything right now, but I know a lot of people prefer other bikes. It doesn't hurt me. I don't even like 29ers, but I'm glad you do.

Doesn't 4bar have a chainstay pivot?

Its bars for shorties.

Fix-the-Spade (Mar 10, 2019 at 10:31)
@nojzilla: If it's got a fixed rear end then it's a hardtail! Or your shock's totally buggered, so buggered it needs a tube of soothing cream and to sleep on it's front for a week.

Fix-the-Spade (Mar 10, 2019 at 14:25)
@nojzilla: Alright, I'll explain better. The first thing to remember is that most names we use for suspension (VPP, DW Link, FSR, KS Link, Maestro etc) are marketing terms, they have little or no basis in engineering, they're just names.
.
Four Bar Linkage is a proper engineering term, it describes a closed chain linkage (as in both ends of it are attached to the same solid object) that contains the base (a bike's front triangle), three moving linkages (the rear triangle) and four pivots (the bearings). In the case of a VPP/DW link bike the entire welded rear triangle counts as 1 of the linkages, with the two short links connecting it to the frame being number 2 and 3. A linkage actuated single pivot like a Commencal is also a four bar linkage as it has three moving pieces (swing arm, seat stays, linkage). Just about the only modern bikes that aren't some variation of a Four Bar Linkage are Orange (Single Pivot), the Atherton bike (five bar) and Felt (who use a six bar system, because they're mental).
.
But really the only bars worth counting are the ones you go to post ride.

Pedantic much? You know damn well what I meant by fixed rear end

Aem221 (Mar 9, 2019 at 8:13)
For what it's worth it probably involved next to no engineering for diamondback to make the release a 29er probably used a catch rear triangle which forms 27.5+ they now have another option. Loved my release 27.5 perfect trail bike and plenty burly. The syncr looks like a perfect do it all hard tail

stiingya (Mar 9, 2019 at 22:11)
For sure, just throwing 29 wheels on a catch with new paint and release stickers. Porter did that last year to make a marathon race bike or something.

Minimal effort. But likely they will see pretty low sales volume due to that. I could see if they did this last year just to get a 29er on the market.

Matt76 (Mar 8, 2019 at 23:00)
I really dont get that. They make two durable and great value FS bikes. Then they ruin it and make an extremely expensive hardtail because its made out of sodding carbon. If they done it right and made it out of aluninium the hardtail would be great value to and still ride great.

sevensixtwo (Mar 9, 2019 at 6:22)
The Syncr is exactly the type of bike I would want as a local XC racer, even though I sep bikes for racing and fun. It would totally replace my sc highball, as many of the Norcal races have real downhills.

Go buy it from it it is for sale on my PB account right now. I'm looking to get the new Mason 2 because it is the same bike but fits 27.5+ tires.

mdpetrie (Aug 16, 2019 at 11:40)
Buyer Beware, Diamondback only provides spare parts support for a few years. If you break something on this bike, you may be out of luck. From DB-Raleigh corporate to me trying to get a spare derailleur hanger for my 2015 DB8:

"We have had most of our bikes for years and years with parts and support, like our Release and Mission lines. The DB8 was more of a one off at the time and parts may be found online used."

xcspeed05 (Mar 9, 2019 at 5:15)
Diamondback should have stuck with the KnuckleBox suspension design. I owned a Red Sortie and the bike absolutely railed!

mhoshal (Mar 9, 2019 at 16:16)
I see there are plenty of stupid people out here that clearly don't know the difference between trail bikes and enduros and all like regurgitating the same bullshit they've all been spoon fed by the industry. The geo on this fs is great trail geo no its not enduro geo and thats not something they are saying. Fir you morons that dont read the first paragraph states its a TRAIL BIKE not an enduro.

mhoshal (Mar 9, 2019 at 16:37) (Below Threshold)
@justincs: lmao funny when you dummys can't come back with anything intelligent to say so you say I'm the stupid one. Good job bud. Sucks when you have no argument doesn't it. Maybe if you idiots actually learned that there is more than enduro out there I wouldn't have to remind you.

By and large, modern (released in the past year) trail bikes have 66 degree head angles, xc is around 68 and enduro is around 64. Ish. Of course the categories are super unclear, but that’s kind of what we’ve been seeing recently.

Whether you like it or not, bikes in each category are getting a lot slacker and longer.

gmt (Mar 9, 2019 at 20:02)
@sdurant12: Agreed. Things will progress geometry wise for all categories, not just Enduro. I site the Geometron G13 as an example of that, albeit at the extreme end.
Post a Comment