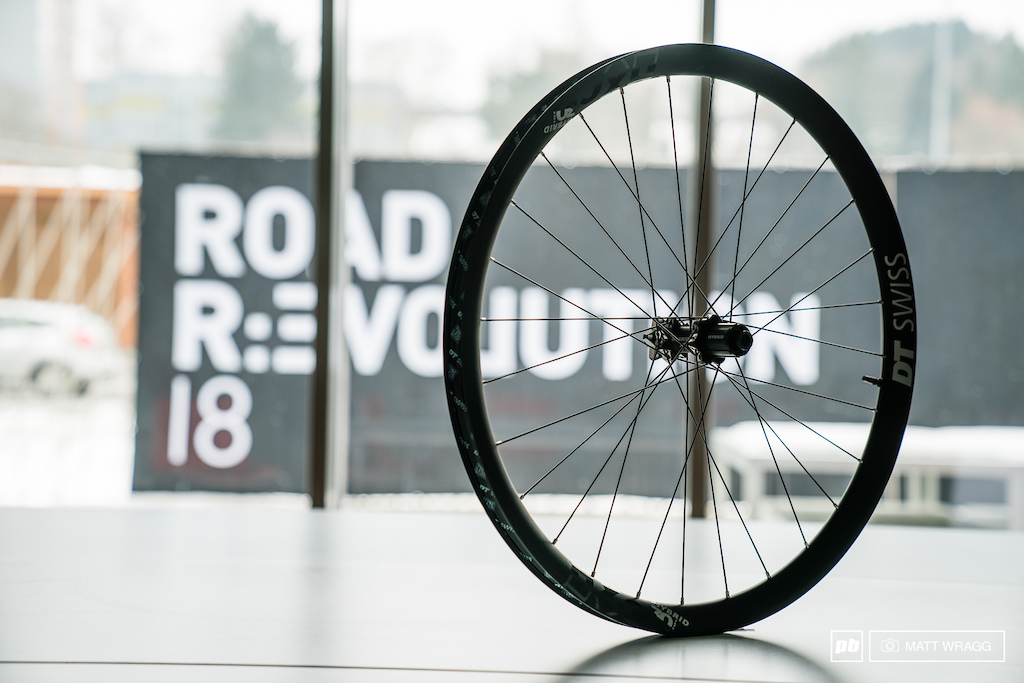 There is no doubt that introducing a motor into the pedalling equation is going to change the forces involved. You're dropping another 250W into the mix, increasing the torque massively and adding, on average, 10kg to the total bike weight.

Up to now, every e-bike on the market has come with stock mountain bike wheels and, you know what? They work. Up to a point. But for the perfectionists at DT Swiss just working has never been enough. After taking some time to ride e-bikes and study the loads and forces involved, they decided they could make a better wheel for them. The result is the H-Series of wheels - the first e-bike-specific wheels.
DT Swiss H-Series Details
• 27.5" or 29" options
• Boost spacing
• Three alloy wheelsets, one carbon
• Three internal rim widths: 25, 30, or 35mm
• Weight: 1978 g (27.5" HX1501)
• MSRP: € 698 (H 1900) up to € 2,248 (HXC 1200)
• www.dtswiss.com
On first impression they look a lot like standard mountain bike wheels, and certainly there is nothing to stop you running these on your mountain bike. In fact, if you want an ultra-durable set of mountain bike wheels and aren't too hung up on weight, they could be a great option. When you start looking at the details closely, however, you can start to see the difference. As Nick Balla explains, "This is an enduro rim profile, but if you take a cross-section and look at the rim, it's been reinforced. What this is doing is giving the rim 20% more resistance on our spoke pullout test. Spoke pullout is the direct translation of torque coming through the freehub body from the engine into the rim." 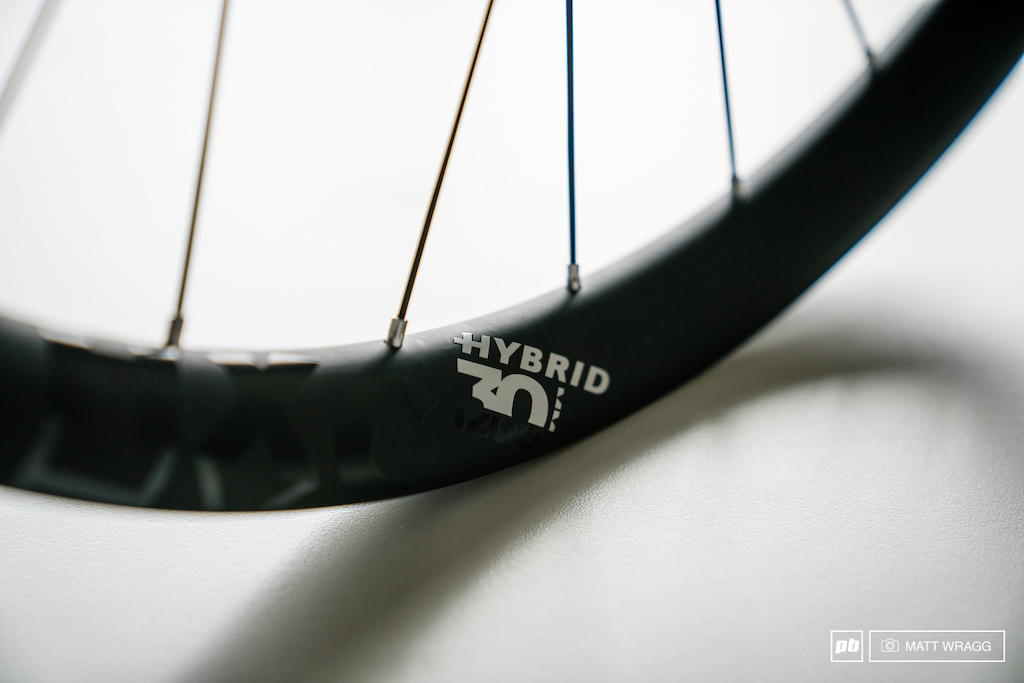 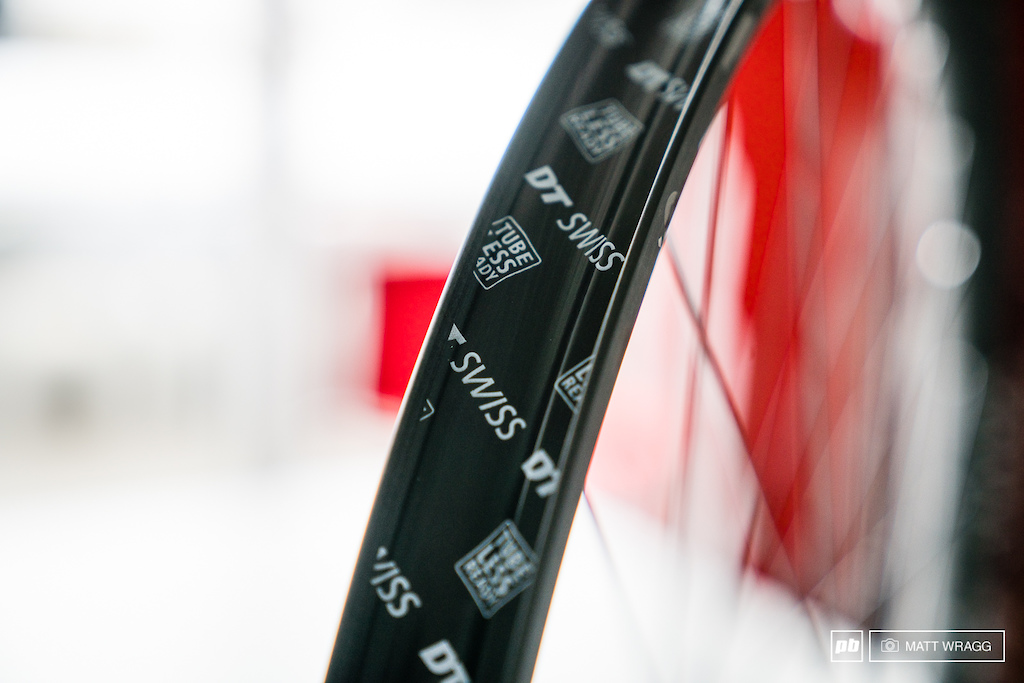 Each alloy wheelset is available with either a 25, 30, or 35mm inner rim width. There's also a 30mm carbon rim option.
The other big reason for beefing up the rim is for system weight. For extra security, DT have factored in an increase of 30kg of total on-trail weight - so although from the outside it may look identical, it's a far tougher rim than their standard range.

Moving onto the hub there is a subtly re-designed body and when you see a cutaway it is clear that there is substantial reinforcement in there. The wall thickness has been increased and the body around the spokes is thicker too. At the freehub, aluminium has been replaced by steel. For an e-bike, Nick sees clear advantages, "The extra 30 grams of a steel freehub body compared to aluminum one is inconsequential for someone with an engine, but results in a huge durability increase." Where the freehub meets the hub, at the DT's patented ratchet system they have opted for a 24-tooth ratchet which they say gives, "A really nice, sweet spot between 36 or 18-teeth. It still gives excellent interface and resistance for a high torque load." 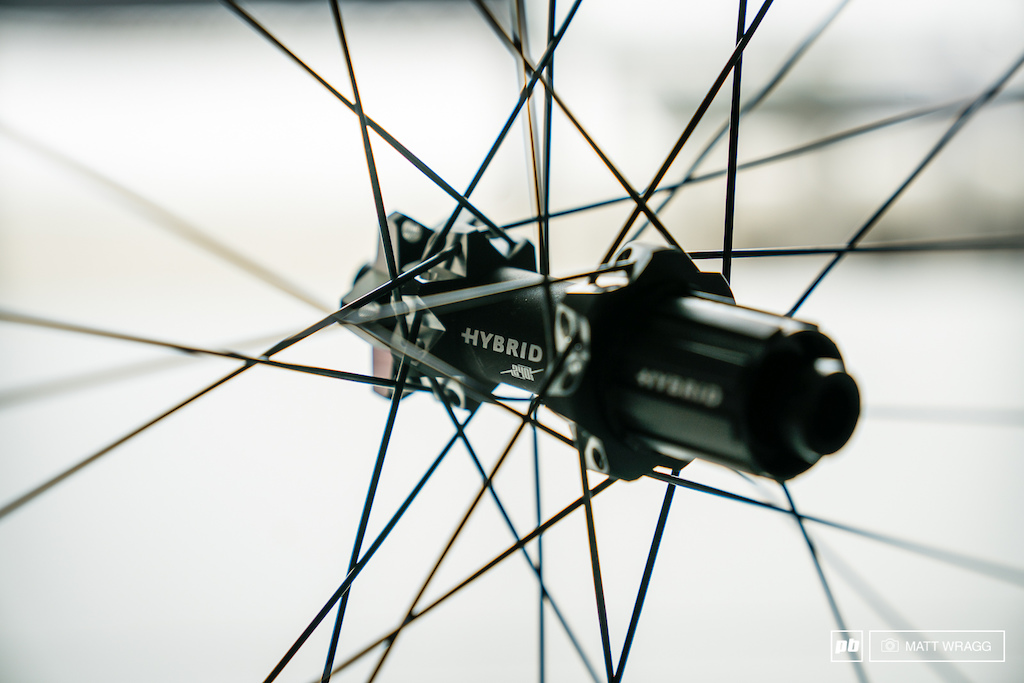 One detail most people may not think about it is the disc mount. They have shied away from Centerlock in favour of a classic 6-bolt mount. Why? "Because," Friso Lorschneider, DT's marketing manager explains, "For sure the Centerlock is going to work, but the possibility for failure which is one screw, is 6 times higher than with 6 screws. That's easy thinking."

Finally there are the spokes, and this is where DT has an advantage over almost every other wheelmaker - because they are the one of the few companies that produce their own spokes. This means they can tune them to each application. For the higher load application of an e-bike, they replaced their standard 2mm head spokes with an all-new 2.34mm head. It may not look or sound like much, but it's a 15% increase on a design that has been proven time and again at the highest levels of World Cup DH, XC and EWS. 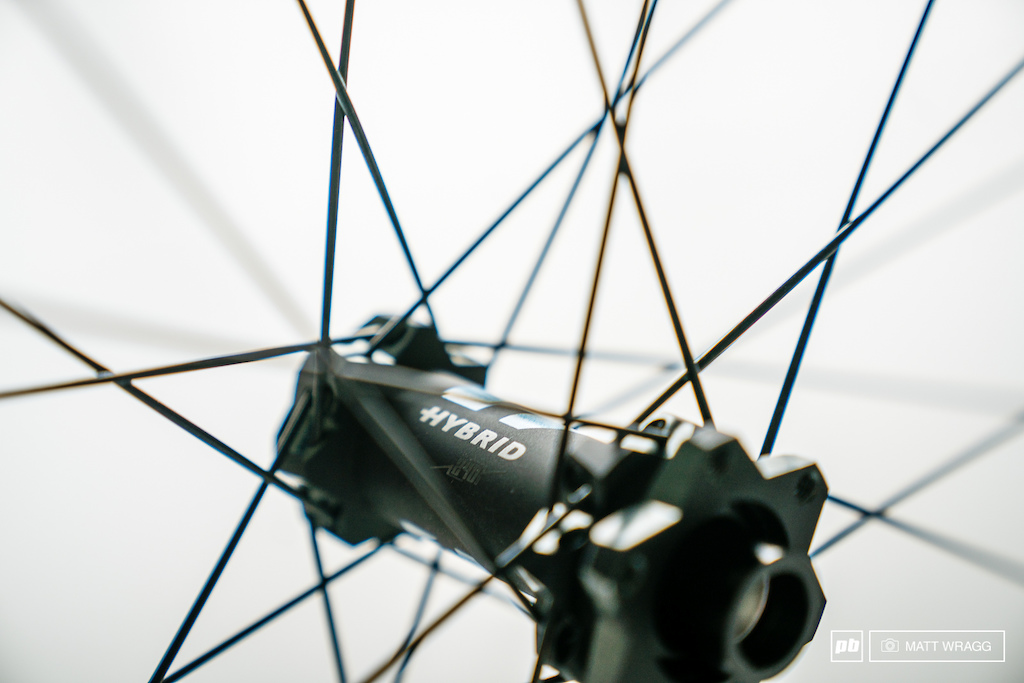 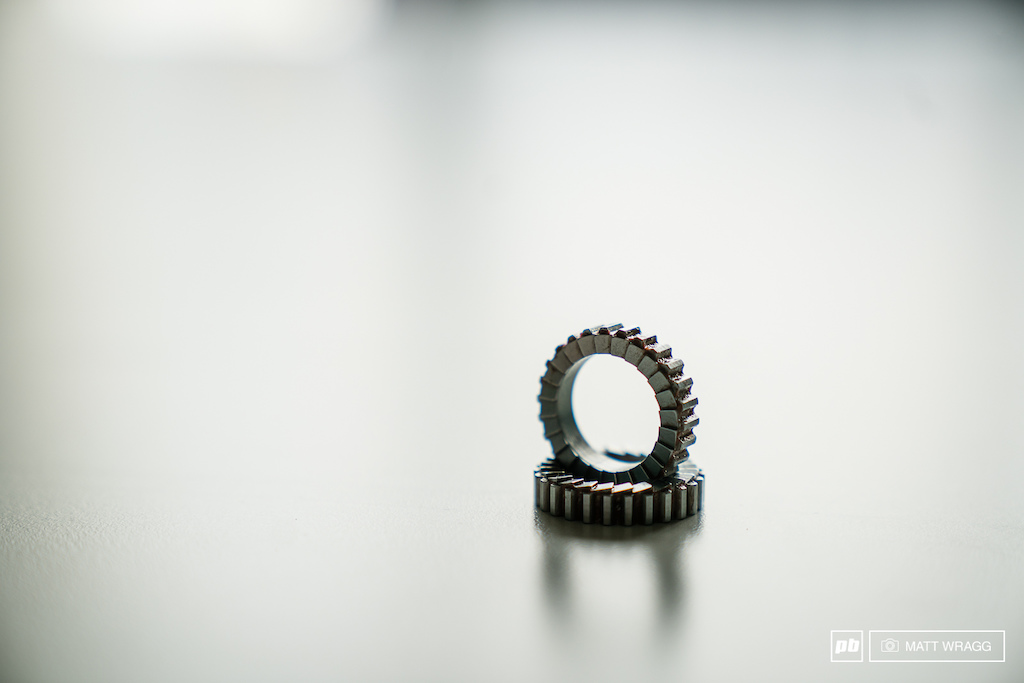 On top of all this innovation, there is one, old-school detail that DT are keen to emphasize: Build quality. Friso is keen to stress this, " Maybe there are some [companies] building, I would say, 1,000 wheelsets a year, at the same constant level, but we can offer this to 250,000 wheelsets a year. All hand-built. You cannot point this out too often. There's no one in the world offering hand-built wheels at these high numbers. 100%. There's no wheelset being built that DT Swiss until now and for upcoming future being tensioned by machine or checked by machine. We have every time 4-eye control, this is something you can say, because the wheel is built and at the end we check the tension of each and every spoke of each wheel, and this check point has been made by a different person. It's not the person building the wheel checking the wheel, to make sure that we will really have a constant and 100% control."

So why go to these lengths? The answer is simple: Value for money. Friso says, "To buy a good e-bike with a Bosch, with a Shimano engine, with a Brose engine, you need to pay at least 3 and a half thousand euros to get the good one. People who are willing to pay that huge amount of money, they expect to have a bike which is going to work for a long time. It's not a 900-euro bike. But it's hard to find one which is going to last two years. We're talking about a lot of money people need to pay." They made this series of wheels to live up to that expectation.

"For extra security, DT have factored in an increase of 30kg of total on-trail weight".

So +10kg on the bike and +20kg around the gut of the average e-bike rider?

Fix-the-Spade (Apr 7, 2017 at 13:04)
Friso Lorschneider, DT's marketing manager explains, "For sure the Centerlock is going to work, but the possibility for failure which is one screw, is 6 times higher than with 6 screws. That's easy thinking."....

...And that's why you work in marketing Mr Lorschneider, if you weren't an advertising drone you'd know that Centrelock is the much stronger standard of the two since the disc rotor sits on a splined interface whilst the 'one screw' does nothing but hold the disc in position. 6-bolt hubs are far more prone to failure (just ask any Crossmax owners) but are also the more popular standard, which is why you're using it, to actually sell some wheels to OEMs who'll be speccing 6 bolt everything. Now excuse me while I go back to mending glasses and muttering...

Ferisko (Apr 7, 2017 at 13:58)
This. A centerlock disc will stay in place even if you completely remove that "one screw" and install your wheel like that...

^ Crossmax owner who also owns a pair of centerlock EX1501's and loves them. They came with very functional adapters for IS 6 bolt discs as well so you can run what ever disc you want on them. I really think it is a step backwards for DT.

padkinson (Apr 9, 2017 at 2:29)
@Ferisko:
I see what you're saying - shear forces applied directly to the bolts on 6 bolt; to the spline on centrelock, which is preferable - but that doesn't change the fact that centrelock relies on that 'one screw' to stay tight. I have actually had a centrelock disc suddenly come loose while riding (on a DT hub no less), which was absolutely terrifying, and caused some nasty damage to the hub and frame.Probably wouldn't have happened if it was periodically checked and threadlocked, but this was on a demo bike.

For the majority of people who'll take the bike out of the box then never do any maintenance ever again, I see 6 bolt as the standard less likely to fail.

In an ideal world we'd combine the two - splined interface held together with 3 or more bolts.

look-out (Apr 9, 2017 at 12:20)
I, too, was afraid of Centerlock some time ago, but I was young, inexperienced and dealing with 1st batch of Centerlocks. Now Centerlock today is something everyone in bike industry should use and it leaves me wondering, why, apart of patent fees, they don't. And as a mechanic, I still prefer to tighten one solid nut, than mess around with flimsy T25 screws six times. God, I hate that 6-bolt standard...

bxxer-rider (Apr 7, 2017 at 14:10)
I'd actually consider running these wheels on my hardtail (non ebike) as I have a real bad habit of braking wheels. So the extra strength would help!

fssphotography (Apr 8, 2017 at 0:53)
Ebike content for europe, use a VPN and you can see this wont be seen in USA, it is geo located, fair enough. Europe is on it's way to a 30 percent penetration rate in the market for Ebikes, so it makes sense to actually do content ebikers want to read as well.

Funny though, rims that are "H" specific instead of "E" for "Enduro". Hybrid....or heavy duty?

But a good option for heavier riders anyway, besides the marketing talk.

prodicker (Apr 6, 2019 at 17:05)
I’m USA - pull right up on Google. Awesome wheel until you need an end cap for fox. Then your screwed - still can’t figure out how to navigate the relam of special partsz

auzb (Apr 9, 2017 at 3:26)
All this ebike specific components thing is stupid, there is much more weight and punishment difference between normal bike users than ebike/non ebikes.