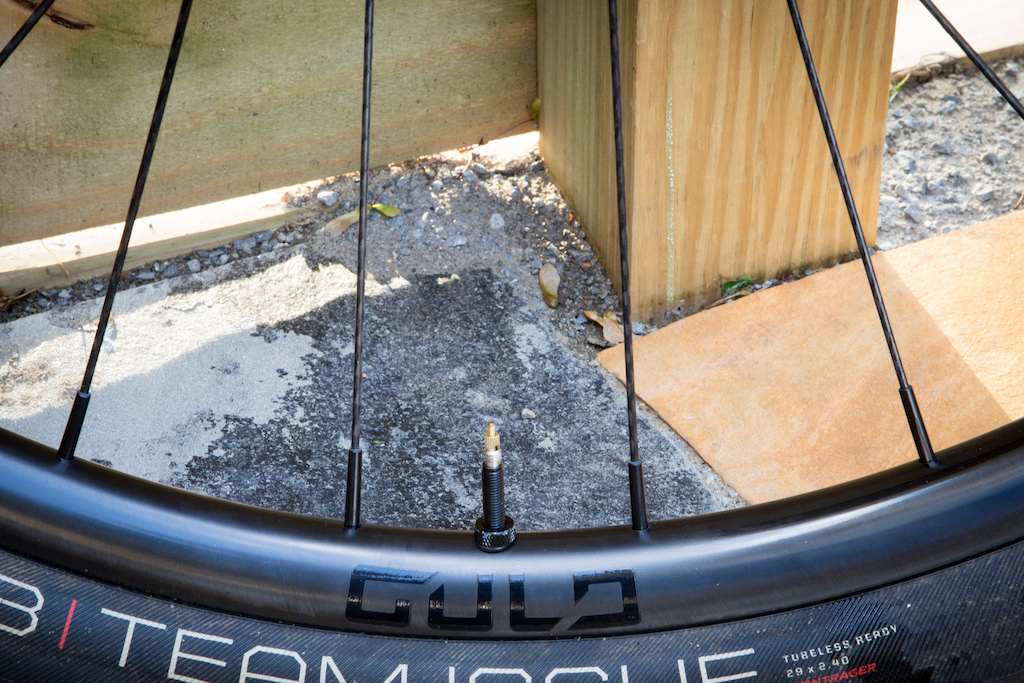 Gulo Composites have given us a preview of their new GMX-25 and GME-30 wheels that use carbon rims and spokes, which they claim provides a reduction in weight along with an increase in strength and ride quality. The spokes are triaxial braided carbon, which Gulo claims hasn't been used in this application up until this point. They're laced into a rim designed by Gulo that allows the spoke to enter straight in instead of at an angle.

Gulo is a brand of KEIR Manufacturing Inc, a company that has been working in manufacturing composites for the industrial world for over ten years. 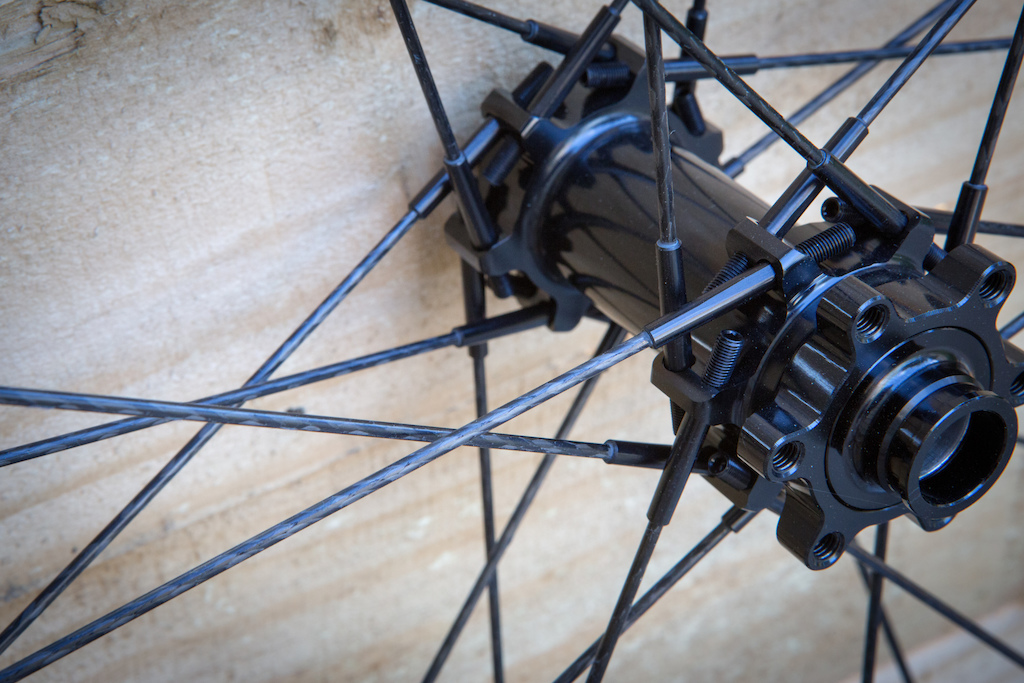 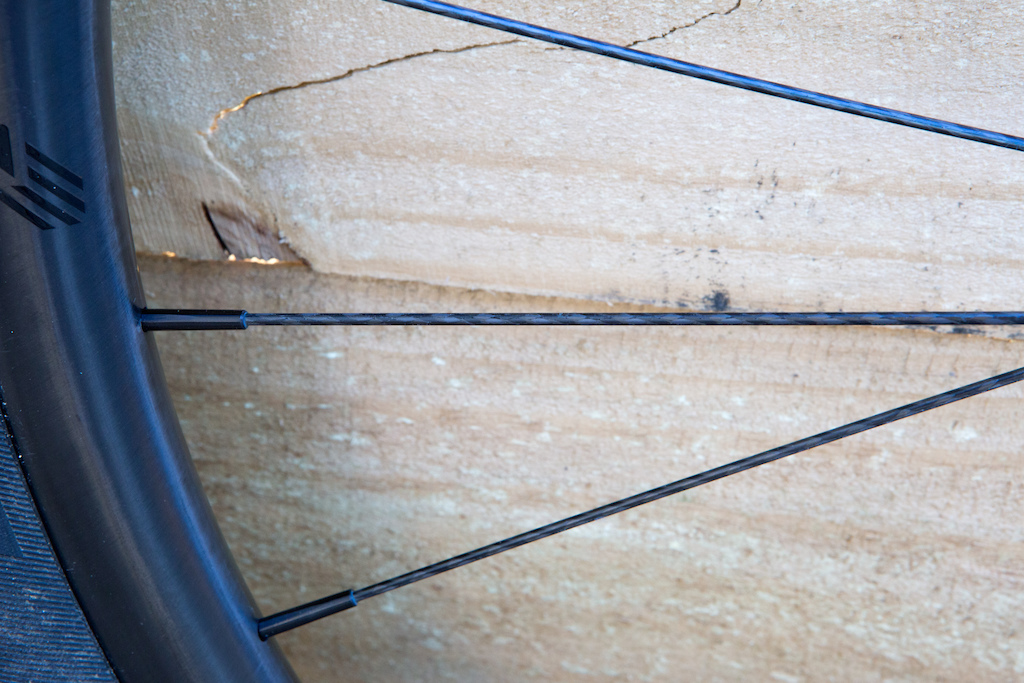 The photos here are of an early production wheelset and there are some changes on the final product in finishing and where the spoke threads into the hub. I'll be testing the more refined final version over the coming months.
G1 Spoke Details

The center of the system and obvious point of interest for everyone here is the carbon spoke. Gulo claim that it took hundreds of test runs to settle on their production spoke. The result, which Gulo is calling their "Gulo Integrated Spoke" is a triaxially braided composite made up of a blend of different materials. In developing the spoke, the team at Gulo claim there were two main goals, low weight and impact resistance. The G1 spoke was formulated to absorb large impacts without failure, yet retain tension for longer than traditional spokes, which weigh significantly more.

The spoke starts out as multiple reels of fiber on Gulo's triaxial braiding machines that are made into spools of spoke braid and then molded into the final spoke shape. The aluminum ferrule end pieces are then attached using aerospace grade bonding agents to create a complete spoke. Gulo claim that the spokes can take multiple harsh impacts without losing tension or structural integrity.

There will be several different wheelsets offered, both road and mountain. We'll focus on the two mountain wheelsets here, the GMX-25 and GME-30.

The GMX-25 is designed for XC racing and is made to be lightweight and strong. The 25mm internal width rim utilizes an asymmetric offset and 24 spokes. The wheels have Gulo's ETI system hubs with 6.66-degrees of engagement and can run either XD or Shimano Microspline. The spokes on this wheelset weigh 2.6 grams each. The wheelset has a 100kg weight limit and weighs 1,300g with rim tape and valves installed.

The GME-30 is designed for trail and enduro use. The wheelset has a 30mm internal width rim, and use a Gulo system hub with 6.66-degrees of engagement and 2.6g spokes. The wheelset weighs 1,475g with valves and rim tape installed. 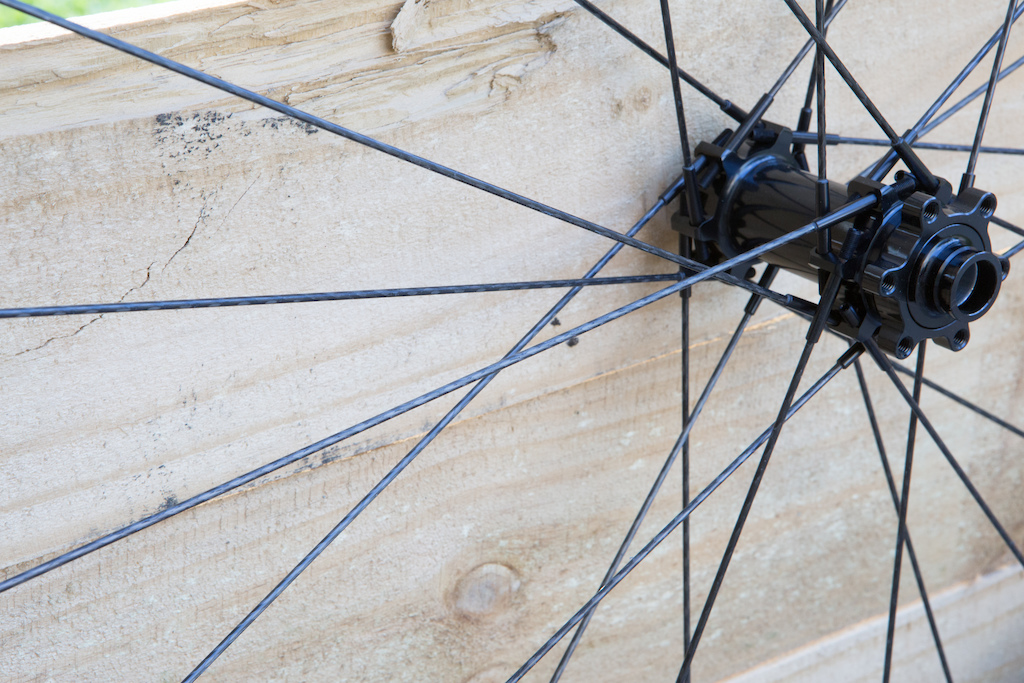 Now, these wheels are some of the more interesting ones we've seen lately and they tick the boxes of light weight and a high level of engineering. How do they hold up? Time will tell - I have a set of their GMX-25 XC Race wheels in hand and will be putting them through the paces in the coming months, with a full review to follow.

pacificnorthwet (Apr 15, 2020 at 16:09)
I actually like the idea of carbon spokes. I bet they will hold tension much better than steel while also dropping some weight. But I forgot this is PB and we are supposed to hate anything new.

ninjatarian (Apr 15, 2020 at 17:29)
I’m intrigued by the idea of light & stiff carbon spokes laced to an alloy rim vs steel spokes laced to a carbon rim. It makes sense in my mind, at least.

heinous (Apr 15, 2020 at 22:19)
Not necessarily - they’re in tension line normal spikes, so quite different to the rigid carbon spoke you see in Lightweight, for example. It’ll depend on the weave how much elongation and compliance you get.

kiddlivid (Apr 15, 2020 at 16:16)
I love the idea and the Tech. These are super cool and that weight......BUT.... I loath specialty wheel anything. Blow and spoke or a rim and you're stuck. I use Mavic for road and buy spare spokes are soon as I order the wheelset so im not stuck without wheels mid season. Give me an alloy 32h any day. I can fix it in the back of my jeep with parts I can likely get an any backtown shop even if its not a perfect match of what I wanted

stiingya (Apr 15, 2020 at 20:10)
@BiNARYBiKE: You'd think they'd still show her off and say "coming soon"... Shit bike companies do that even when half the world isn't sheltering in place.

BiNARYBiKE (Apr 15, 2020 at 21:12)
@stiingya: Agreed. I don't know. Seems like they still have Sentinel and Patrol stock they're trying to move as well. Once the new bikes drop, that stuff will just sit.

Jcmonty (Apr 15, 2020 at 22:44)
Cascade components posted a pic on their IG of testing a new link for the sentinel. Should make it lore progressive and have more travel. Think there is a thread on mtbr about it

Segamethod (Apr 15, 2020 at 15:46)
Not so sure about this. If I wanted exotic spokes, I'd be more likely to look at Dyneema spokes such as what Berd is offering. Those would very likely be lighter than these carbon spokes (both due to Dyneema's superior density and less structure needed to attach to the hub/wheel) and will work with almost any hub on the market. Finally, my dream of an Onyx Racing Hub without a weight penalty can be achieved.

velodonata (Apr 16, 2020 at 4:19)
That's what I'm running and it's a nice combo. Still no lightweight wheelset but entirely reasonable. But I like Onyx hubs enough I would run them with rebar spokes if that were my only choice.

Svinyard (Apr 15, 2020 at 15:42)
You can just build a custom wheelset that comes in at this weight as long as you get some DT240 hubs or something similarly light.

Svinyard (Apr 16, 2020 at 7:04)
@JohanG: Yeah of course but we've been able to have super light hubs and rims already. Have ultra proprietary spokes made of carbon is jumping the shark in my opinion. Especially for an aggressive trail/enduro type wheelset. XC racer, sure it makes sense I guess.

So I'm sure you can find lots of frames that cost more than those these days!

takeiteasyridehard (Apr 15, 2020 at 20:28)
Firmly in between dentist, and groundbreaking neurosurgeon. Right about at psychiatrist range....or even heart surgeon.

Dentist makes more than a psychiatrist. Hell most MDs don’t make as much as a dentist. I’m a radiologist and they probably make more than me. And dentists spend more money on bikes than any doctor I know because they actually have time to ride. 4 day work weeks, business hours, only with no call. It’s a sweet gig if you don’t go insane staring into peoples mouths all day.

Rollfast2 (Apr 17, 2020 at 3:56)
Built a wheels once with Fiberflight Carbon spokes. Fiberfright would be a more appropriate name. Knocked a stick in them on a downhill and broke all but one spoke. Steel is real!

tevans473 (Apr 15, 2020 at 17:46)
There used to be a road wheel, I think they were called Topolino. Used a braided/composite spoke but it was molded into the hub flanges. Nightmare to work on. Sounds like these are an improvement for sure.

oldmanbucksaw (Apr 16, 2020 at 3:31)
Have you ever wondered why you don't see more carbon spoked wheels around? Because they don't work. Stainless steel spokes have become the industry standard because they have proven to be capable of high spoke tension, resistant to fatigue, economically viable, and elastic enough to withstand the constant changes a spoke faces.

oldmanbucksaw (Apr 16, 2020 at 8:51)
@JohanG: your comment isn't remotely close to accurate. If carbon spokes were as effective as the claims you would see a lot more of them. I'm a wheelbuilder, I own a wheelbuilding shop and I don't build with carbon spokes and I don't know of any other reputable wheel builders that do. That being said I'm a big believer in carbon rims.

velodonata (Apr 16, 2020 at 4:22)
These are early production? So does that explain why the threaded part of the nipple is buried so deep into the hub? And how are these trued, do you have to worry about damage from twisting the spoke, or true from both ends?

Drewbreezy (Apr 16, 2020 at 14:34)
I still have my spinergy xyclone race wheels on the bike I used to race in the late 90s early 2000s and those puppies were flexy as limp dic in the wind. But those PBO spokes were cool and weight weenie light.

velodonata (Apr 16, 2020 at 10:17)
Yeah, I don't see where these would have any advantage over Berd spokes other than possibly being easier to build up initially due to Berd's tension settling a bit for the first few days. And I imagine a stick or a rock in the spokes will go a lot better with Berds than these carbon sticks.