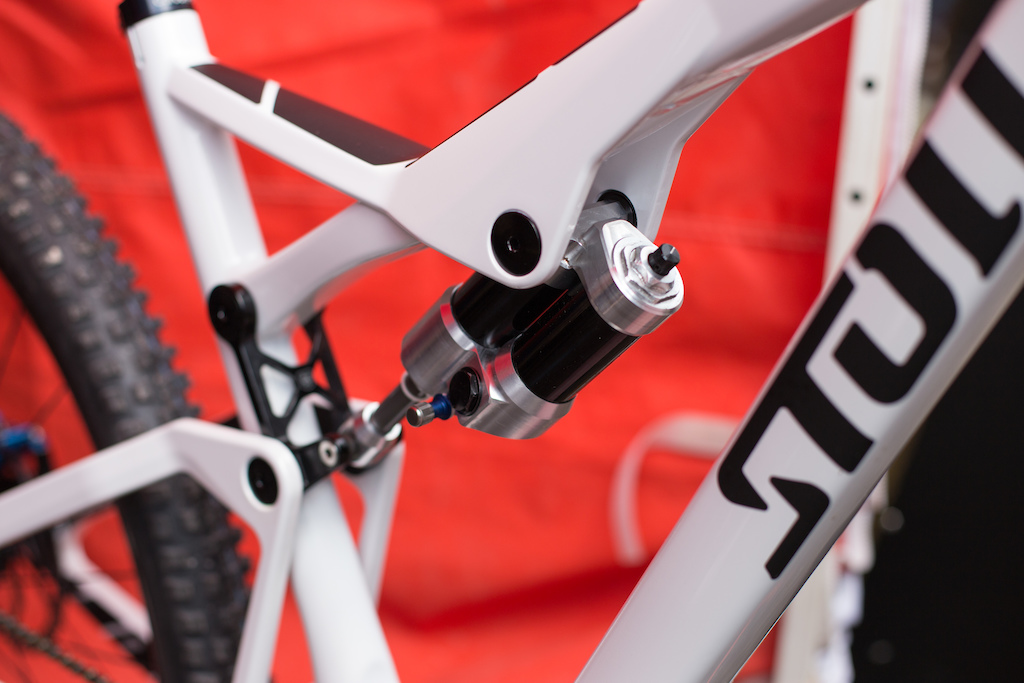 Intend Suspension is a one man show run by Cornelius Kapfinger, who previously worked with Trickstuff, the German company best known for their powerful, high-end brakes. Kapfinger has been doing his own thing for a couple of years now, with a product line that includes stems, cranks, several USD forks, and the Hover, the new air sprung shock that we first saw on a bike at Sea Otter. Here's a little bit deeper look at what's going on inside. 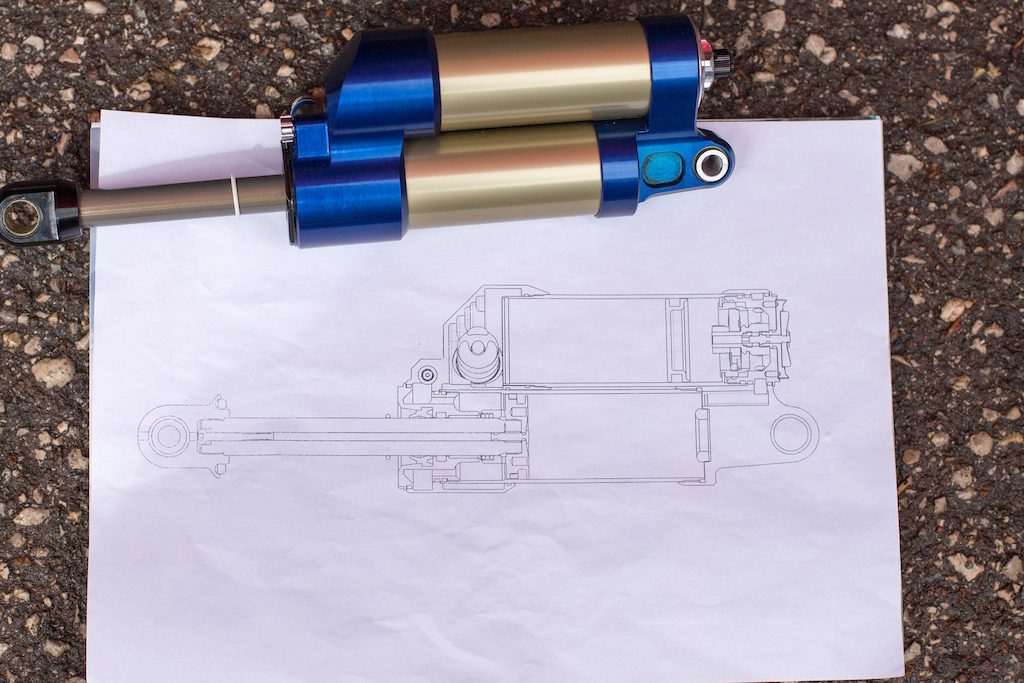 You can access the negative chamber and really tune the beginning of the stroke to be ultra soft. The weight of the bike alone can actually engage the suspension, and it's claimed to have much less friction than a typical air shock.
Kapfinger has been working on developing the Hover for some time now and is finishing up the testing phase. According to Kapfinger, the design has a couple of advantages, including the fact that there's one less dynamic, or moving seal, and the existing seals are always in contact with oil. The other advantage is that the complete damper surface is able to radiate and dissipate heat. It doesn't insulate the shock as a standard air shock does, which keeps temperatures lower. 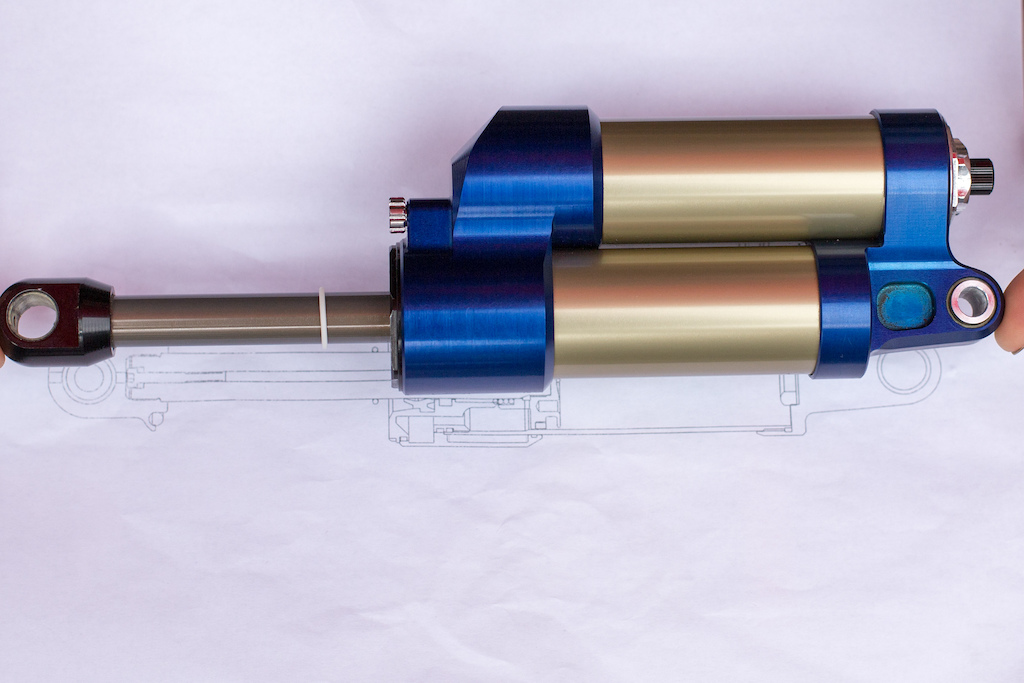 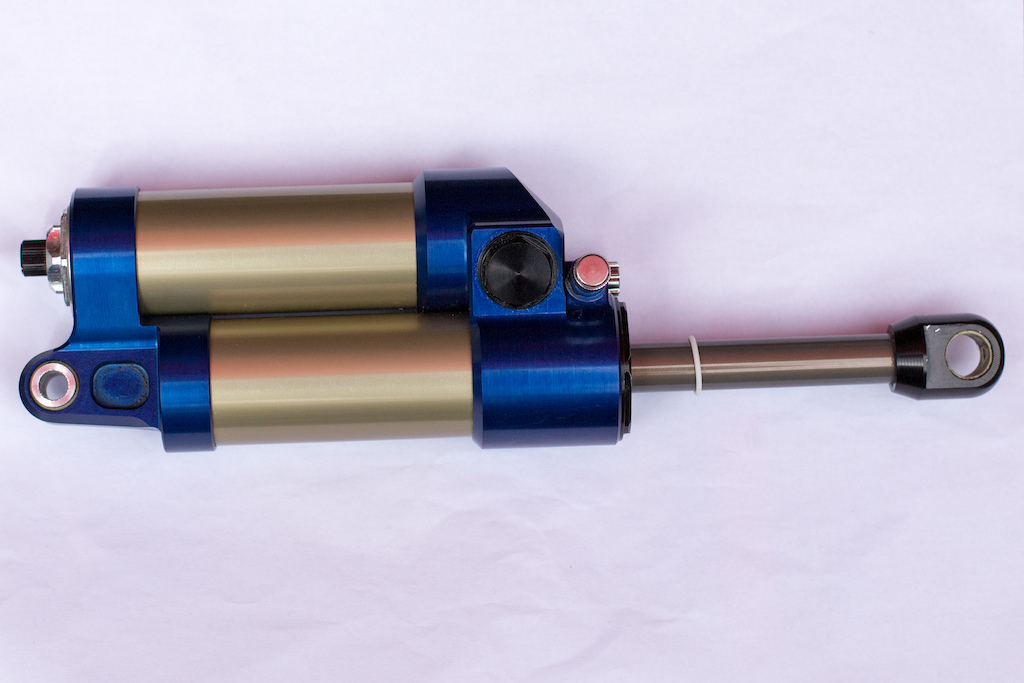 The aluminum piston rod may look diminutive, but it's 14mm thick and with a 3mm hole in the middle, and Kapfinger is confident that it's strong enough for everything from trail riding to downhill usage. 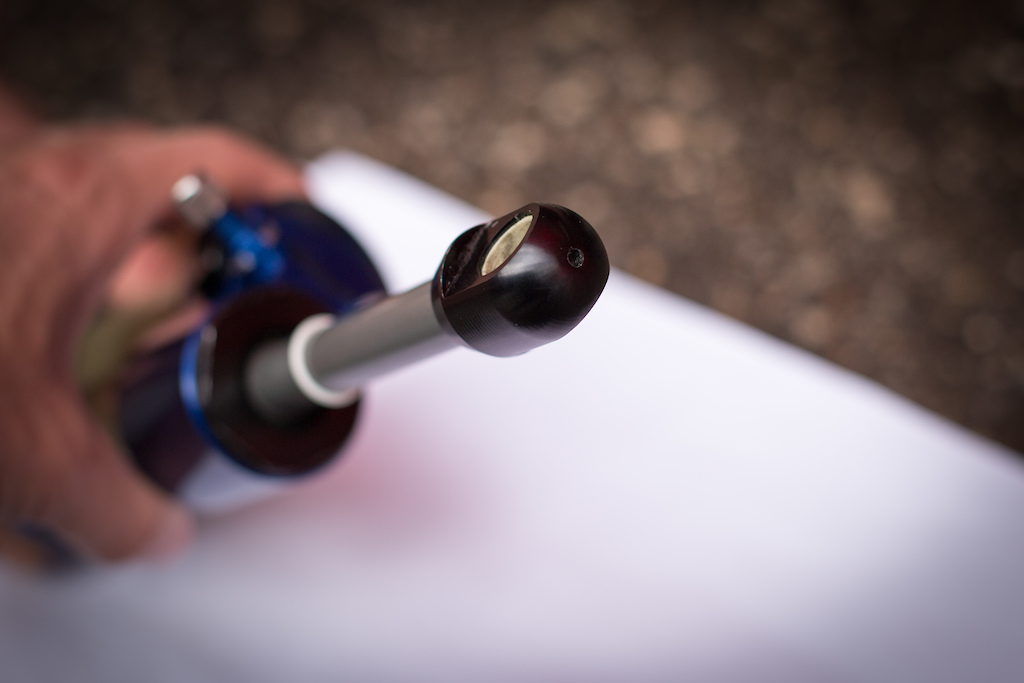 The shock can be bled to get air out of the oil chamber with a 2.5mm hex key. You simply open the valve, compress, and close. Air goes from the oil back to the negative side. 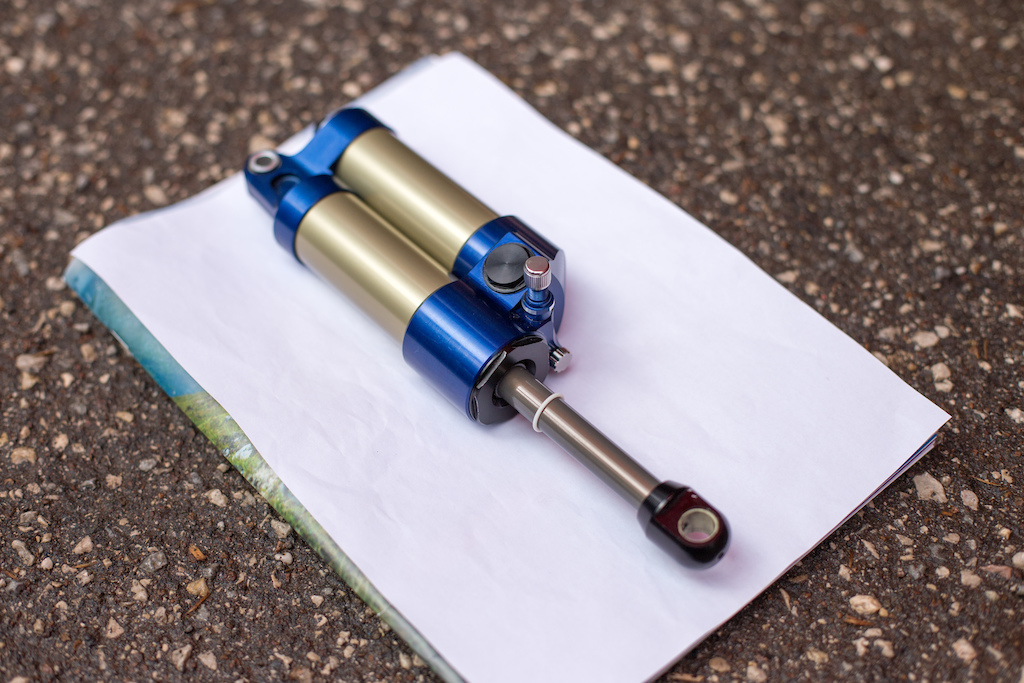 The damper doesn't have a lockout function or dedicated pedaling platform lever, but riders can just close off the LSC if they want to firm things up. Kapfinger says that the damper is suitable for whatever applications riders desire, from trail riding to World Cup DH.

The shock is still in development at this point, but if Kapfinger is happy with the next prototypes he has finished in a couple of weeks then he will start production.

The shock will be available in a variety metric and non-metric lengths, and it weighs a claimed 410g for the 205mm trunnion. The shock will sell for around €1,000 EUR. 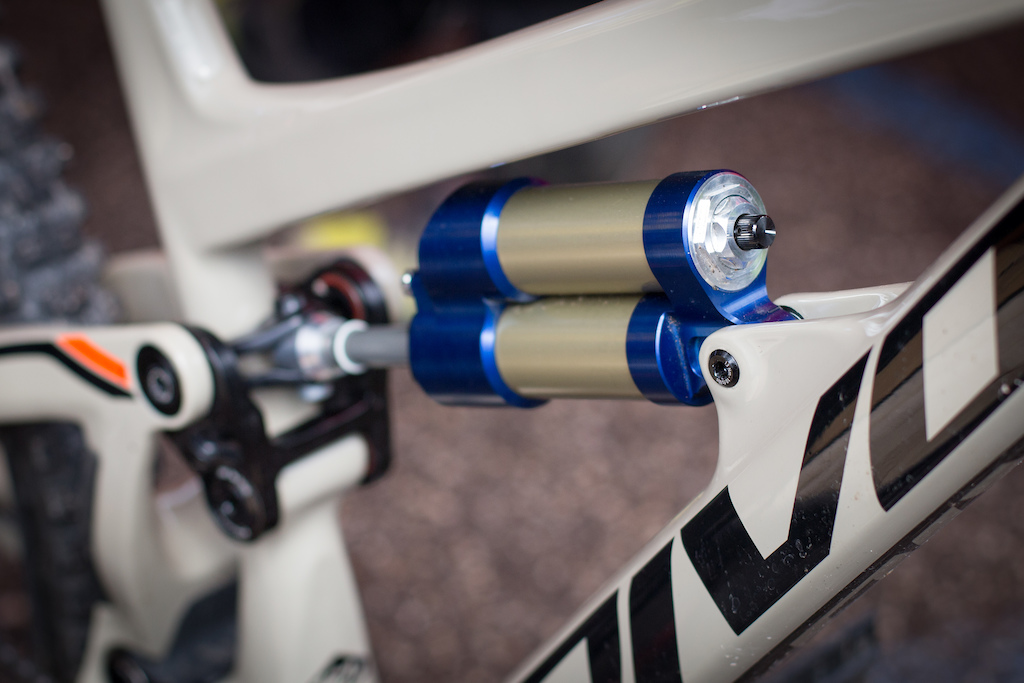 nozes (May 13, 2019 at 12:05)
Cornelius Kapfinger sounds like a vilain from a Bond movie. I can see 007 trying to recover the plans to develop a world-changing rear shock stolen from the Milliard Industries.

On a side note, what happened with the oleo Brew Nitro shock?!

kleinblake (May 13, 2019 at 11:36)
The shock that you were supposed to run with 0 sag and a nearly fixed spring rate? Can’t imagine why that project never took off

xy9ine (May 13, 2019 at 11:39)
still in development, it appears. looking fairly refined now though: www.instagram.com/nitroshox

kleinblake (May 13, 2019 at 17:19)
@Gackt: I went back through all the PB articles on it and it appears I’m misremembering them saying the shock should be run without any sag. But what I did notice is that twice they said they were going to the the shock, but nothing ever came of it.

Loche (May 13, 2019 at 20:14)
@kleinblake: Yeah oleo struts are actually great design, but it's hard on seals. Maybe Brew is struggling with durability?

@mikelevy: Can you use your magic to get updates on the Nitro development?

saxokev (May 14, 2019 at 13:50)
@Loche: still here guys, just taking a bit longer than hoped to carry out mods etc due to small numbers of prototypes. Working with an established suspension service company to work after after care then hope have some for sale towards the end of the year!

usedbikestuff (May 13, 2019 at 12:15)
It is the most perfect example of a solidworks/cad drawing coming to life. not a bad thing, just looks like it materialized off of the screen. engineers dream.

vinay (May 13, 2019 at 16:20)
Also probably, what's most easy/accurate/quick/efficient to machine. People are now used to seeing the five axis machine work from Hope, but what you see here is on par with something like a Hope C2. Not necessarily a bad thing. You can try to make organic shapes on a more simple machine too, but it will be at the expensive of accuracy and efficiency.

Rigidjunkie (May 13, 2019 at 14:53)
Wait am I supposed to get excited about a new product that has neither carbon nor a new standard attached to it?

This would look rad on one of those UK handmade steel single pivot bikes, nothing would look big enough.

islandforlife (May 13, 2019 at 12:42)
As an MRP Ribbon owner... I would love to be able to tune the negative chamber on my shock like I can on my fork. All the benefits of an air shock with the bonus of coil-like small bump feel.

Mntneer (May 13, 2019 at 18:31)
People without tunable positive and negative chambers won't understand

Serpentras (May 14, 2019 at 3:06)
In the meanwhile you can get a DVO topaz, they are cheap and have what you wanted. For a air shock it almost feels like a coil because it really require almost no force to move.
+ and - chaimber tuning ofc..

mtnrush666 (May 13, 2019 at 12:54)
I have the Intend Stiff Master headset on my Spartan and love it. I would definitely buy other products from this innovative company.

chrod (May 13, 2019 at 11:52)
It would be an awesome bonus if this shock is 100% user-serviceable, making rebuilds cheaper and less time-consuming than sending sealed chamber shocks in every year or so for service.

jmjr (May 13, 2019 at 12:22)
I think on mtb news it was claimed that you don’t really have to service the shock, as you can just bleed it from the outside. On the other hand Cornelius uses standard seals you can buy in every specialized seal shop and service it at home, in case it really needs a proper service.

Mathullah (May 13, 2019 at 12:53)
Yes and they are based on the same technology which is called OTS (same goes for Fox Dyad shock). I never heard of that tchnology before but google was a great help.

beeboo (May 13, 2019 at 13:18)
Looks awesome! Looking forward to real world reviews of how it holds up. I’m curious as to how it will perform on different suspension designs

Loamhuck (May 13, 2019 at 20:16)
Formal training, serious drive, and some mfg support and it's not that difficult to make something that works. The challenge is ultimate / fatigue strength, consistent mfg within an production environment and creating something that performs as well (if not better) than the Big 2 manufacturers.

TheSlayer99 (May 14, 2019 at 4:35) (Below Threshold)
@Loamhuck: its not too difficult to build a shock better than rockshox, but fox on the other hand make some really good stuff.

zyoungson (May 13, 2019 at 14:25)
Bc shafts on coil shocks only see damping loads and dont carry the full weight of the bike like this one

petrhill (May 13, 2019 at 22:20)
@zyoungson: The axial loads are not quite the problem. It's the lateral forces from bike torsion and deformation that kill shocks. And coils in coil shocks, as @NoriDori mentioned, do not take those loads as well, letting it solely on their thin shaft.
Anyway, that shock won't probably be the best choice for frame designs that rely on shock stiffness.

willsoffe (May 17, 2019 at 1:26)
Alan abandoned making DH bikes as his sons moved on from the sport. He still makes the most WILD motorcycle engines the world has ever seen though. Give him a follow on Instagram!

tadgercat (May 13, 2019 at 17:44)
Whoa...mind blown. Look-out, someone is about to get hired to design shocks for airplanes, desert racing trucks or tanks. see ya later dude. The money is def gonna pull him and his shock away from bikes.

Satanslittlehelper (May 13, 2019 at 12:24)
If it's attached to a proper suspension design that doesn't make the damper a structural component (cough*specialized*cough) of the frame, then it doesn't matter. You only see issues related to shafts breaking on mtb shocks because of bad designs that use a fixed point to connect the damper as opposed to two eyelets that can rotate.

fluider (May 13, 2019 at 12:59)
@Satanslittlehelper: Canecreek uses solid steel shaft for their coil shocks, of quite small diameter. Yeti's SB150 or which one is it is the only frame "authorised" by FOX to use the coil shock thank to Yeti's split clevis design.
.
I wonder, why has this industry still not come with proper balljoint mounting at shock eyelets? Or, when those shocks still see torsion and bending, why they don't use large diameter shafts? Like, as large as possible.

Satanslittlehelper (May 13, 2019 at 13:54)
@fluider: Cane Creek did actually use 16mm eyelets with a spherical bearing / DU waaaaaaay back in the day, but they got away from it at some point. I think Ohlins, is using sphericals on some of their shocks, or at least they were when they first released their mtb shocks. Seems like with the amount of funky designs and the likelihood of frames not being perfectly aligned to begin with spherical would be the standard...

southoftheborder (May 13, 2019 at 16:29)
@Satanslittlehelper: DT Swiss is the other brand doing spherical bearings on the shock mounts IIRC.

fluider (May 13, 2019 at 21:39)
@southoftheborder, @ Satanslittlehelper : you're both right, Ohlins and DT Swiss do have some of theirs shock with spherical plain bearing possible, but (un)fortunately it's a standard spherical bearing with 16mm outer diameter, 8mm bore and only 5mm width. A standard eylet bore is some inch crap fraction of 15.something mm.

Socket (May 13, 2019 at 16:10)
Given the lack of bottom out bumper, I'm guessing this makes a hell of a bang when it bottoms. Don't really place much faith in a design that omits a detail that simple.

Socket (May 13, 2019 at 23:35)
@iggzdaloc: if that thing at the end of the chamber is meant to be a bumper that the main piston hits, that looks even worse than nothing at all - it's not captive and it will fall out, get chewed up and end up jamming the damping circuits open. Source: have worked on more than one Rockshox shock with Countermeasure...

Alaifernal (May 14, 2019 at 11:46)
I love ingeneers just wanted to say we don't need big brands with a lot off them if only one guy can do this. rmembers me CRConception...
Post a Comment