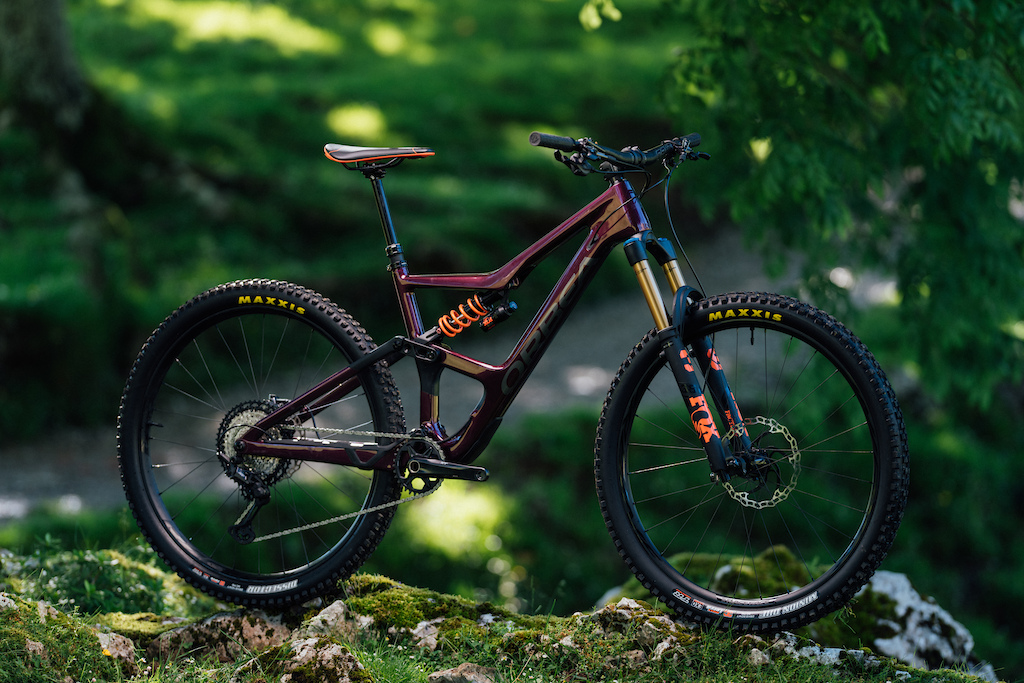 Orbea recently overhauled their Rallon enduro bike. Guess what? It's longer and slacker than its predecessor, and it has more travel when compared to the original 150mm-travel Rallon. This has opened the door for something to fill the gap between the 140mm-travel Occam and the 160mm-travel Rallon. Enter the Occam LT (LT stands for long travel - obviously). With 150mm of squish at either end and similar geometry to the 140mm Occam, Orbea says this is the bike for people who think the new Rallon is a bit too much bike.
2022 Occam and Occam LT Details 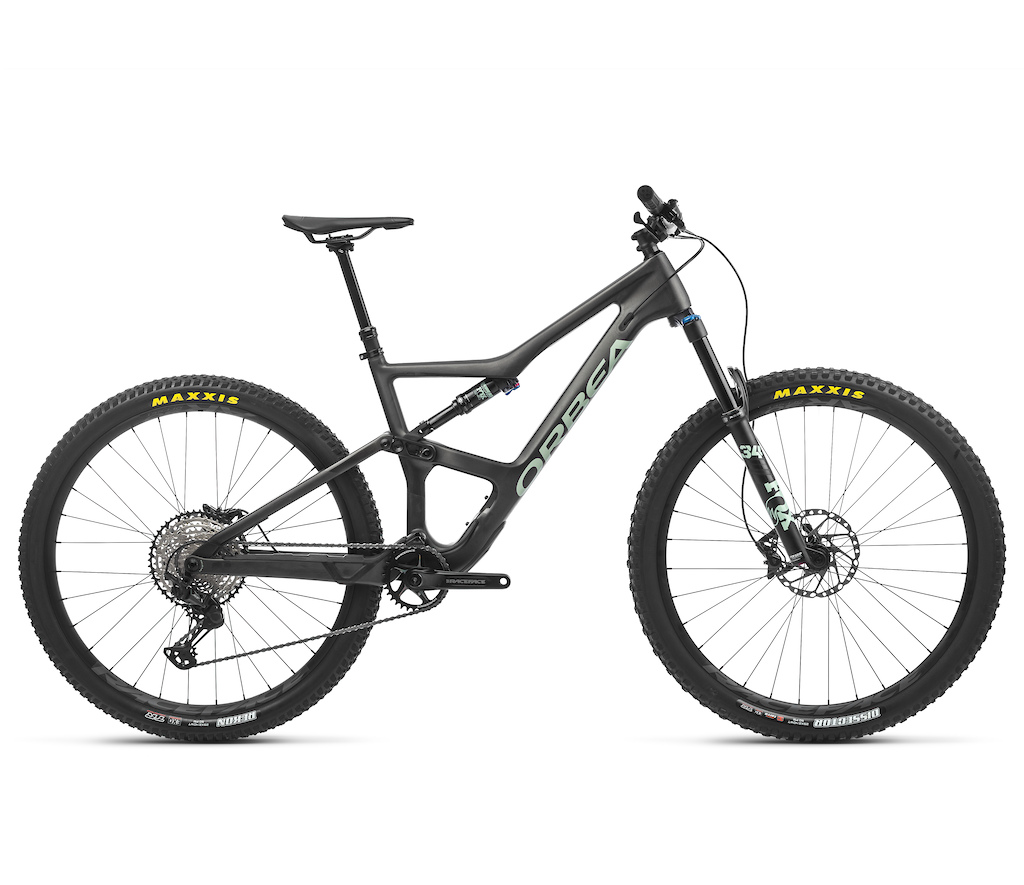 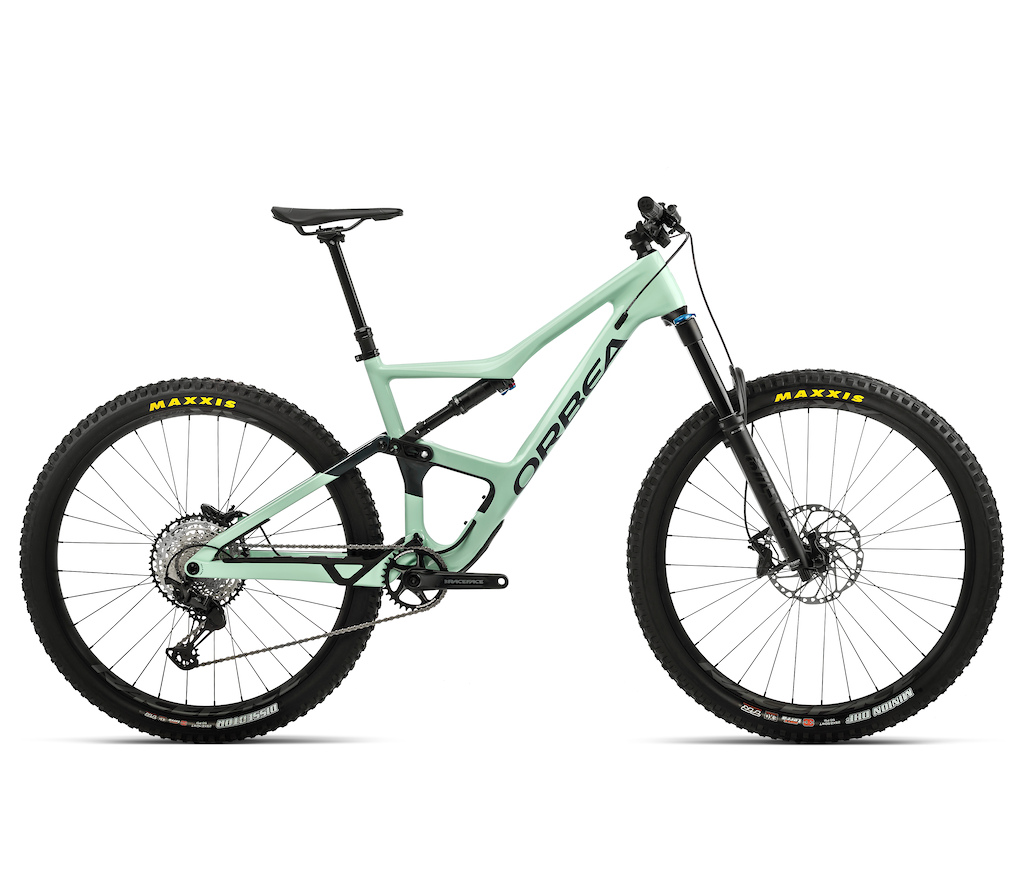 The regular Occam (left) continues alongside the new Occam LT (right)
The regular 140mm Occam isn't going anywhere and has also been updated with a new rocker link that is shared with the Occam LT. The new link has fewer parts and allows for a mini tool to be stashed in the hollow pivot axle, but keeps the suspension kinematics the same. The difference between the 140mm and 150mm bikes is in the shock - the LT uses a 210 x 55mm shock, rather than 210mm x 50mm. This is teamed with a 150mm Fox 36 in place of a 140mm Fox 34 fork. It is possible to switch shocks to convert a 2022 Occam to an Occam LT (or vise-versa), but Orbea doesn't recommend fitting the longer shock to an older Occam as it may contact the frame. The 2022 bike has an updated top tube in small and medium sizes to prevent this. 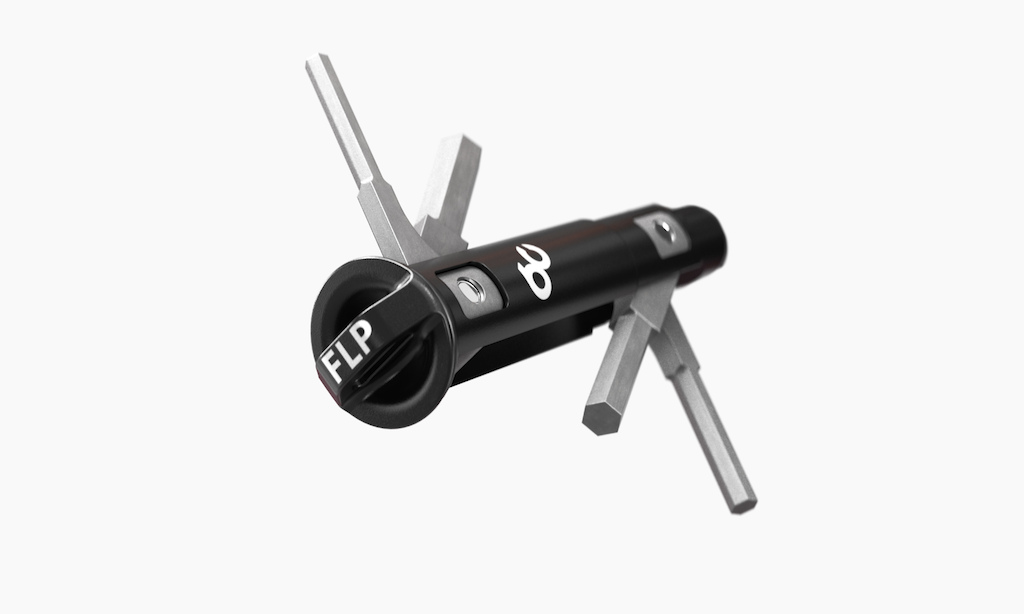 Like the 2022 Rallon, the Occam is now compatible with a little tool that sits inside the rocker link pivot.

The longer fork slackens the seat and head angles by half a degree on the LT, but otherwise the bikes are nearly identical. Technically, the LT's slacker geometry will reduce the reach slightly, but this isn't shown in Orbea's geometry chart. With a head angle of 66-degrees, Orbea insists the Occam LT is not a "mini-Rallon"; it's significantly shorter and steeper, offering a more agile ride. 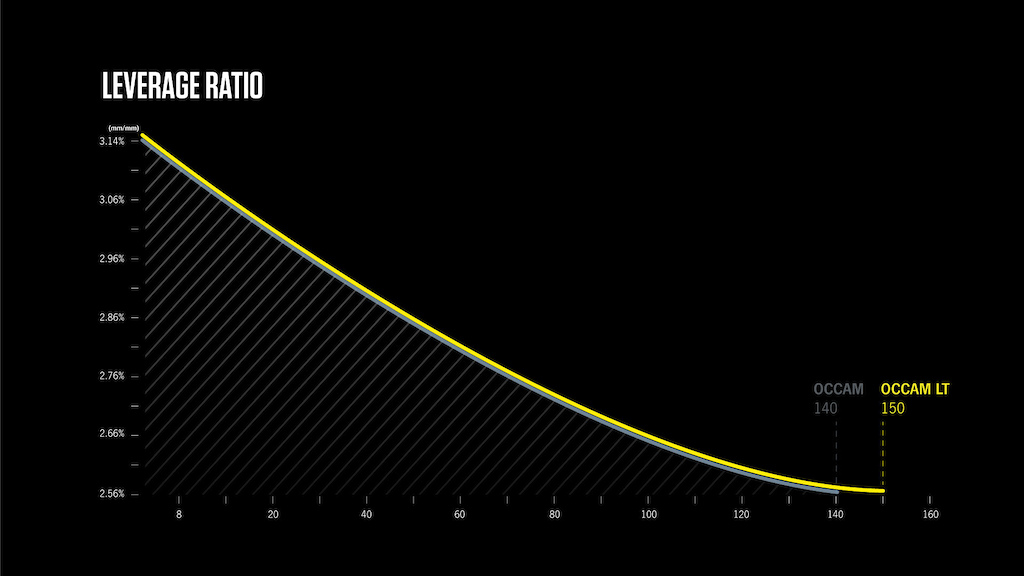 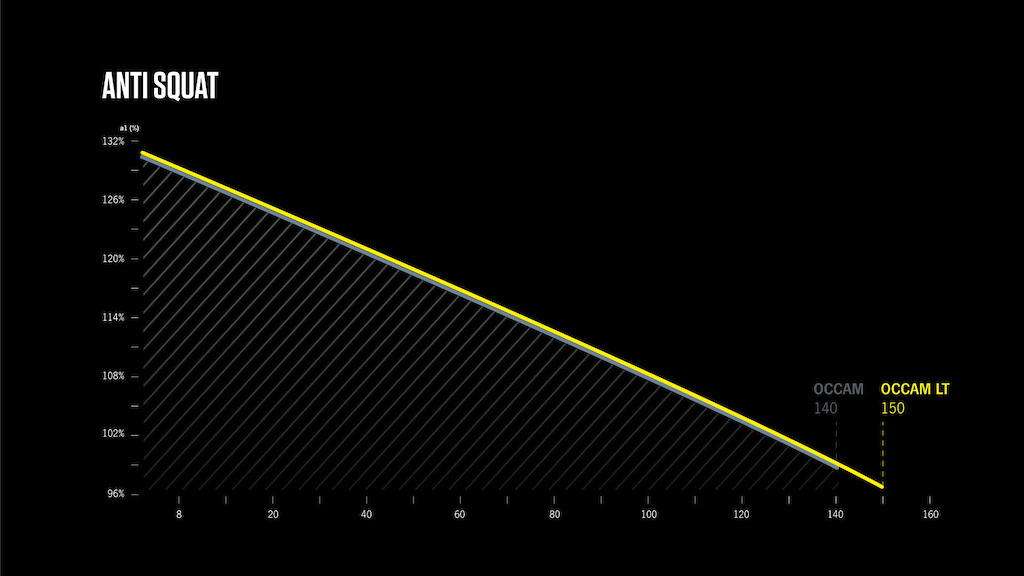 The kinematics are nearly identical between both Occams, except for the LT's extra 10mm of suspension travel. Both bikes are progressive throughout the stroke, with about 18% progression from start to finish. Anti-squat is around 120% at sag, although the LT will have slightly less anti-squat if it is set up with the same percentage sag because the anti-squat values drop off deeper into the travel.

Compared to the standard Occam, the default spec on the LT includes beefier (four-pot) brakes, more aggressive tires and piggyback rather than in-line shocks. But through Orbea's MyO (My Orbea) programme, it's possible to configure different specifications when buying online. It's even possible to swap to a 150mm Fox 36 on a 140mm frame, or up the shock travel on an otherwise standard Occam. On the LT models, you can pick between coil or air shocks, and it's possible to choose between different tire specs (Minion or Assegai) or upgrade certain components like brakes, dropper posts and forks. 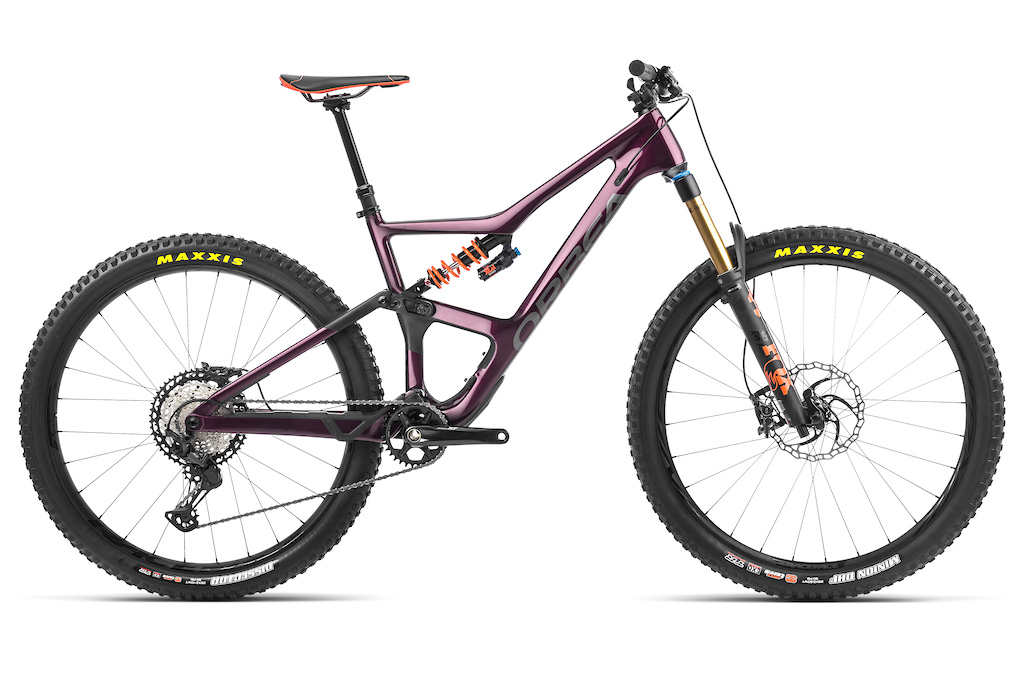 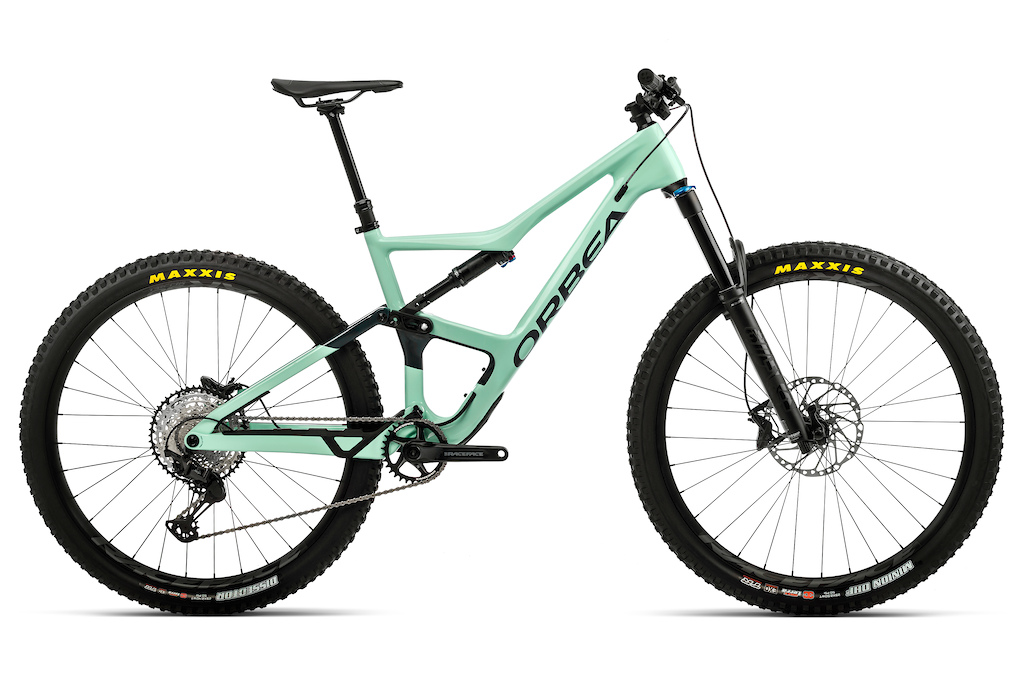 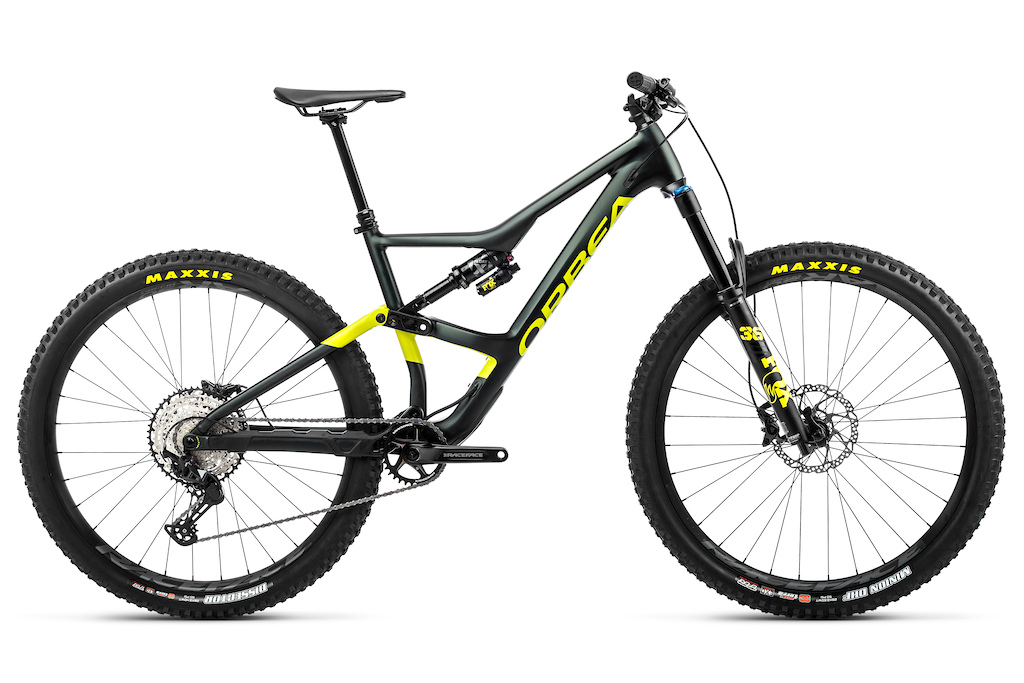 Marcencinitas (Sep 16, 2021 at 8:14)
Reading all of PBs 170mm enduro bike reviews reminds me that 150mm coil, a Fox 36 and decent geometry is enough for any descent and much more fun on the climbs and on long rides.

razor (Sep 16, 2021 at 8:48)
I agree. Based on the Enduro category reviews that category of bike seems to now be mini DH bikes (with DH features such as a coil shocks, idlers, DH spec tyres) with a steep seat angle to make the climbs more tolerable and a water bottle mount to keep PB happy.

Whilst I appreciate that this is going to suit some people, it's huge overkill for most UK riding (and I suspect the same in other countries too). I ride a V3 Bronson with 170mm Lyrik Ultimates, which seemingly sits now in 'trail bike' category, it's incredibly capable, fun to ride and even that is more than I need in many cases.

foggnm (Sep 16, 2021 at 10:15)
Especially given the + geo changes in the last few years. I recently bought a NP Reactor (130rear/140mm fox 36) and it shreds everything just as well as my 160mm megatower did. I took it to the bike park and for sure I could say there...a little more travel and fork would be great. But man anything else, even the normal rocky nasty stuff...I couldn't be happier. The biggest thing is it has a wheelbase and front center more like a long travel bike. Not saying I'll stop buying 170mm bikes, but wow how bikes have changed just in the past 3 years.

everythingsucks (Sep 17, 2021 at 13:59)
Just to play devils advocate, and it's different strokes for different folks, but I'm slightly faster uphill on my 170mm enduro bike than I was on my 150mm trail bike. Not that I'm setting records either way.

seb-stott (Sep 16, 2021 at 7:14)
Yeah, I've ridden bikes with 0% progression and a coil shock and it can work; you just run less sag and maybe more high-speed compression. The bottom-out bumper actually does a lot for you with a coil shock. I'd say 18% is a decent amount of progression though.

chakaping (Sep 16, 2021 at 7:46)
@hellbelly: Or a Cane Creek one if you can stand the white colour. Utterly transformed my wallowy enduro weapon.

lefthandohvhater (Sep 16, 2021 at 8:06)
@hellbelly: Sprindex is even better. progression at the end of the shock stroke and even adjustable.

brawlstars5000 (Sep 16, 2021 at 8:09) (Below Threshold)
Coilshocks are actually progressive and dont go too well with very progressive rearends, at least for the average Joe. Most people only take the spring into account, but the damper also takes more and more force to compress. On a good number of shocks the bottomout bumper ist quite big, which means that you have a very progressive shock in the last centimeter (or so) of travel. Coilshock should work well here.

lefthandohvhater (Sep 16, 2021 at 8:18)
@vanillarice19: Theyre progressive at the last 20% of the stroke. So really just when you're hitting the bottom out bumper but its still nice.
sprindex.com/pages/overview

seb-stott (Sep 16, 2021 at 8:30)
@lefthandohvhater: This review suggests the Springdex is digressive in the early travel when the adjustment is wound on. www.bikeradar.com/reviews/components/rear-shocks/sprindex-adjustable-coil-spring-review

carym (Sep 16, 2021 at 8:34)
@brawlstars5000: A coil is not progressive in and of itself (progressive coils have a mile amount of progressivity), where an air spring by its nature is. A bottom out bumper is exactly that, a bumper that controls bottom out. Likewise the damper is independent of the spring and can be tuned to adjust for different amounts of spring and linkage progressiveness.

lefthandohvhater (Sep 16, 2021 at 8:41)
@seb-stott: That is very interesting. I'm glad they did that testing. I was certainly curious about how that worked with the gap there. Would love to see the graphs of that data.

4thflowkage (Sep 16, 2021 at 11:18)
@seb-stott: I've gotten good results from very little sag and wide open high speed compression and a decent amount of low speed. It gives up the first part of the travel easily due to no HSC but the spring is so heavy it doesn't bottom out + the shaft speed is lower towards the end so LSC kicks in.

Darwin66 (Sep 16, 2021 at 11:58)
@chakaping: I've got the white valt on my enduro, and it is an awesome spring, and the white is actually SUPER cool. Matches the decals on my fork, and the lettering on my frame.

chakaping (Sep 17, 2021 at 0:47)
@Darwin66: Did it make a big difference for you? I'd say it's the single biggest improvement I've ever felt from a parts upgrade. Mine is on an old-school CCDB coil on a Radon Swoop 29, which used to trapdoor through it's travel before.

Darwin66 (Sep 17, 2021 at 15:04)
@chakaping: Its the only coil I've ever used. Had an newer x2 performance and swapped to a new dhx2 factory. This spring seems super cool. At first I thought my bike was too soft off the top and I felt like I couldn't pop. Sped up my lsr a few clicks, and slowed down my hsr (added a bit of lsc as well) and It feels absolutely awesome. Super soft off the top, supportive in the mid stroke, really supple overall. Sometimes it can feel a bit stiff in the chunk, but that's probably because I'm running too much preload and lsc.

Really still learning how to tune a coil.

withdignityifnotalacrity (Sep 16, 2021 at 7:27)
Stoked to see proper trail bike geo in 2021. I've heard good things about the Occam's pedaling characteristics and the LT sounds like a compelling east coast enduro bike. The M30 LT looks like a compelling package.

DaneL (Sep 16, 2021 at 7:28)
Orbea has been hyping up this release far too much for what is effectively a paint and component spec update. I now understand why shops are expecting significant quantities of these in short time, though.

As far as build quality goes... I've owned bikes from Trek, Giant, Santa Cruz, Transition, and Orbea. I've also built up bikes from Yeti and Nukeproof. I'd say Orbea is somewhere in the middle of the range for build quality. It doesn't come close to Santa Cruz or possibly even Nukeproof, but it's similar to Transition and Yeti.

GinTonik (Sep 18, 2021 at 13:17)
"Orbea doesn't recommend fitting the longer shock to an older Occam as it may contact the frame. The 2022 bike has an updated top tube in small and medium sizes to prevent this."

So my 2021 Occam in L in can upgrade with the new Rocker link and up the rear travel to 150mm or did I miss anything?

dsut4392 (Sep 16, 2021 at 23:05)
So the regular Occam and the LT use the same frame, and the LT has a longer fork and longer shock giving it less BB drop, and slacker HT and ST angles...but somehow the standover height, stack & reach stay the same?
Did I miss the reality distortion field generator in the spec list?

Vlad-Putin (Sep 16, 2021 at 7:18)
This frame is basically the same as the orbea rise, I think, yet the bike version doesn't require the frame strut? I guess the area around the bb/motor beefs it up enough so it's not necessary?

buyo (Sep 17, 2021 at 0:26)
That alloy frame looks great. From the distance, looks very much like carbon. Those welds, sweet polish work

matadorCE (Sep 16, 2021 at 9:05)
Glad they finally decided to do something with that big empty hole in the linkage that looks like crap currently. The seated reach is still too short, the chainstays too long, and the leverage ratio too high for heavy riders so buyer beware. Also their build kit on the regular aluminum models is terrible.

But seriously Orbea, is this a bodge job with an old frame design or what?

mr-moose (Sep 16, 2021 at 7:52)
Yes, although give it a few years and the mullet will go the same way as the once ubiquitous fat bike, plus bike, original mullet etc.

The award for the worst fad in Mountain Biking since the days of Gary Fishers clunkers are Mullets! By a billion miles!!

MattP76 (Sep 17, 2021 at 10:23)
@redrook: For consumers this fad has died a lot quicker than I expected. Pros may use them but let's face it they are the only ones who can squeeze the minute benefit it may provided. Interesting that Sam Hill is apparently switching back to 27.5 all round.

redrook (Sep 17, 2021 at 11:11)
@MattP76: That is interesting, but it's also interesting to see how many are still using mullets, and not just racers - Remy Metallier for example. We'll see how long it lasts. Just because only the pros can squeeze out the minute benefits doesn't mean that it will stop, lets face it only the pros will notice the differences in a lot of biking products, yet people keep buying them.

MattP76 (Sep 17, 2021 at 11:20)
@redrook: Very true, but give it a couple of years at most and Mullets will be gone. A lot of bike manufacturers have not put them in their 2022 line ups. That speaks volumes.
Below threshold threads are hidden