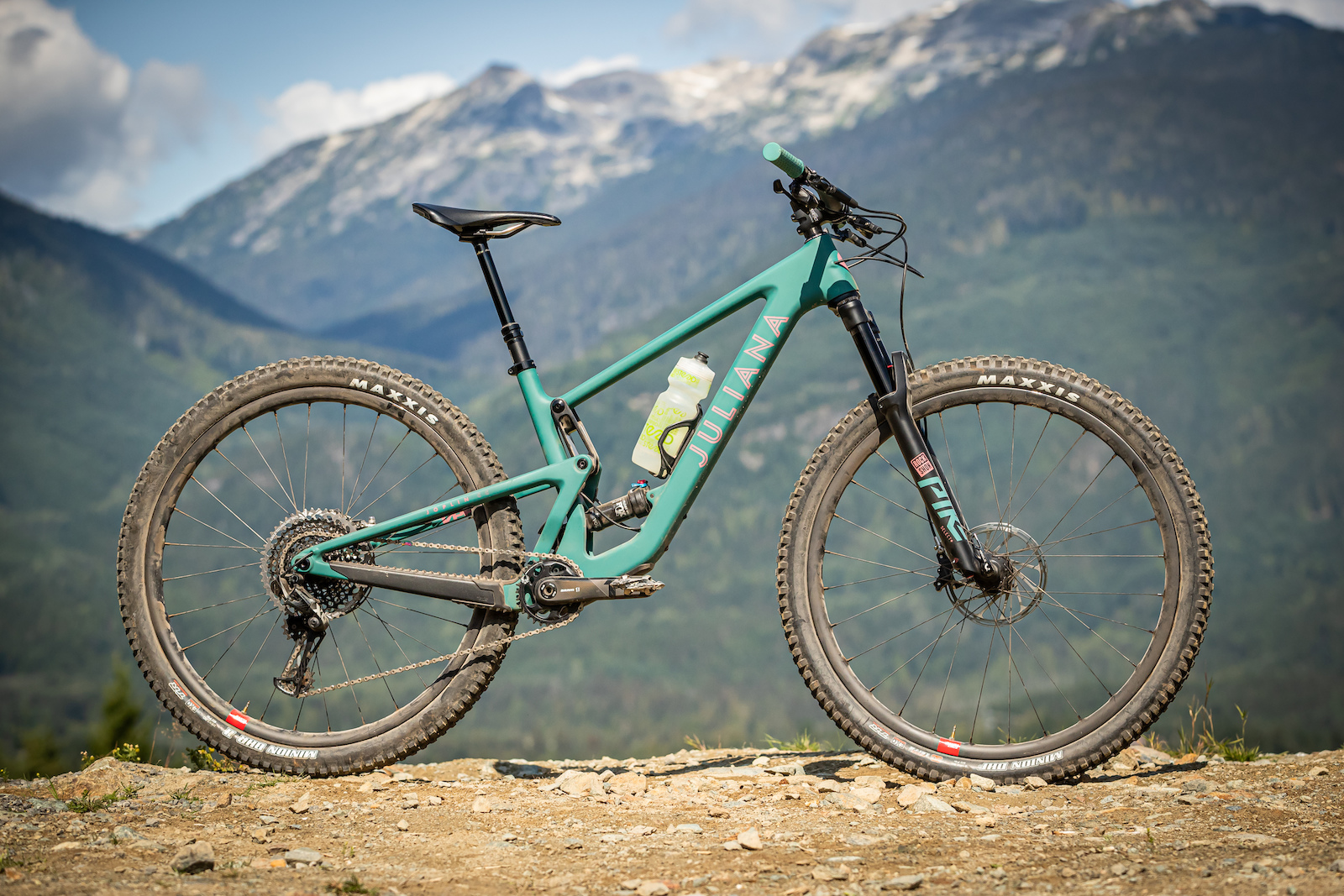 Like the Juliana Maverick that I had the chance to ride in Colorado earlier this summer, the Joplin has the same frame as its Santa Cruz counterpart, the Tallboy. Mike Levy has the details on that bike here, but keep on reading to find out my initial impressions on the women's version of this updated short travel 29er.

Juliana Bicycles debuted the Joplin when the brand debuted in 2013, and they launched the second generation in 2016, so this is the third generation of the short-traveled 29er to hit the trails. Like the last time around, this bike gets 10mm more travel front and rear, a slacker head tube angle and a longer reach. In addition, the new Joplin uses the lower-link mounted shock VPP design that the Maverick, Roubion, and Strega use.
Juliana Joplin
• Wheelsize: 29"
• Travel: 120mm rear / 130mm fork
• Head angle: 65.5° or 65.7°
• Chainstay length: 430-440mm (adjustable)
• Threaded bottom bracket
• 12 x 148mm rear spacing
• Aluminum, CC and C carbon frames
• Sizes: XS, S, M
• Weight (size M): 28 lb / 12.7 kg
• MSRP: $8,199 USD as shown
• www.julianabicycles.com
The Joplin is made for "going far and going fast" and is offered in sizes XS through Medium. There are six kits available, two aluminum kits, two carbon "C" kits, and two carbon "CC" kits, all of which come with a 120mm rear shock that is tuned for lighter riders, a Juliana women’s saddle, and Juliana grips.

The $8,199 Joplin CC X01 Reserve above is the one that I've been riding for the past couple weeks in Squamish, BC. It gets a RockShox Pike Select+ fork, a Fox Float Performance DPS rear shock, a SRAM X01 drivetrain, SRAM G2 RSC brakes, and Santa Cruz's 27mm Reserve carbon wheels. 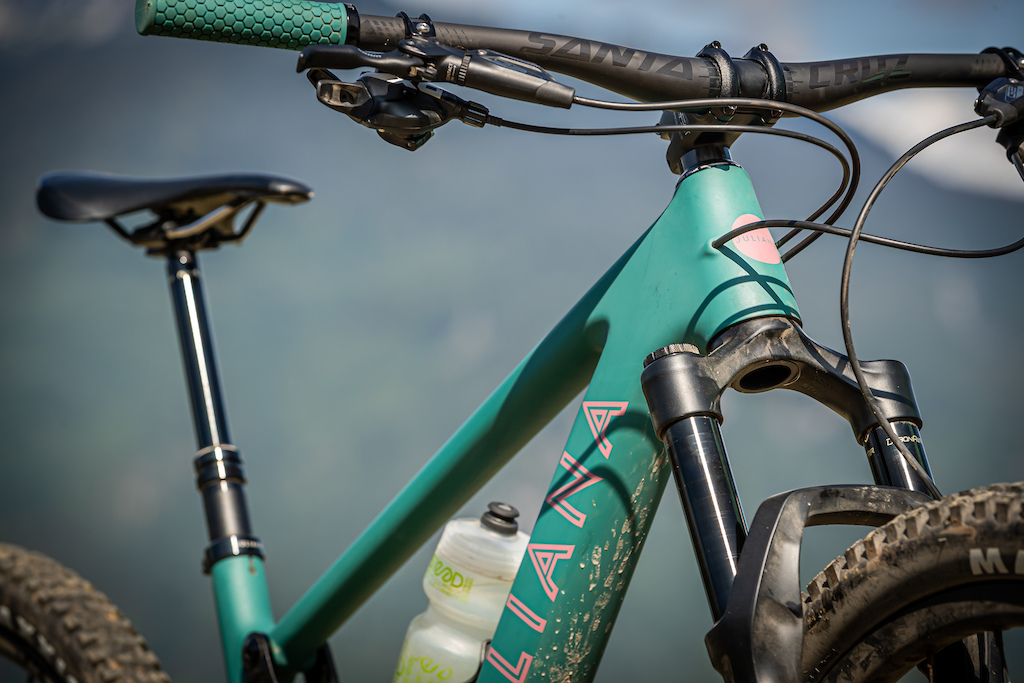 The Joplin's carbon frame with its lower-link mounted shock VPP design might look similar to the Maverick, but it has 20mm less travel front and rear. It's available in both the high-grade carbon frame known as the “CC” and the regular "C" carbon as well as aluminum.

Other details include internally-molded tubes to make cable routing easier, a downtube protector, a fender that keeps mud away from the shock, a ribbed chainstay protector, room to mount a water bottle on the top of the downtube on all sizes, a threaded bottom bracket, and ISCG-05 tabs for mounting a chain guard.

There's also a lifetime frame and bearing warranty on the Joplin. 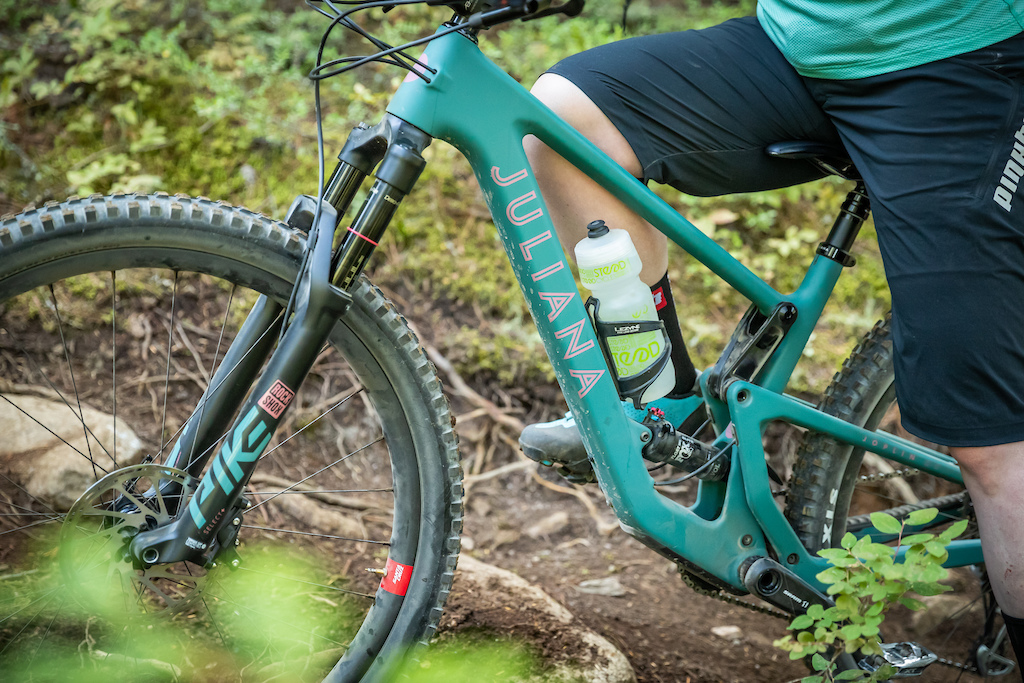 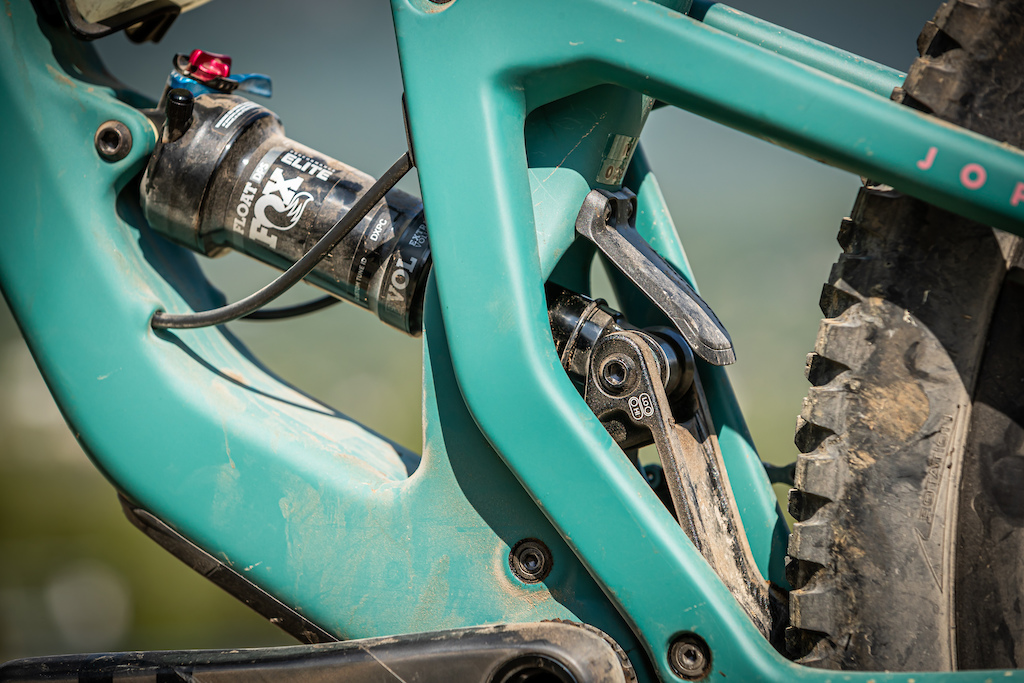 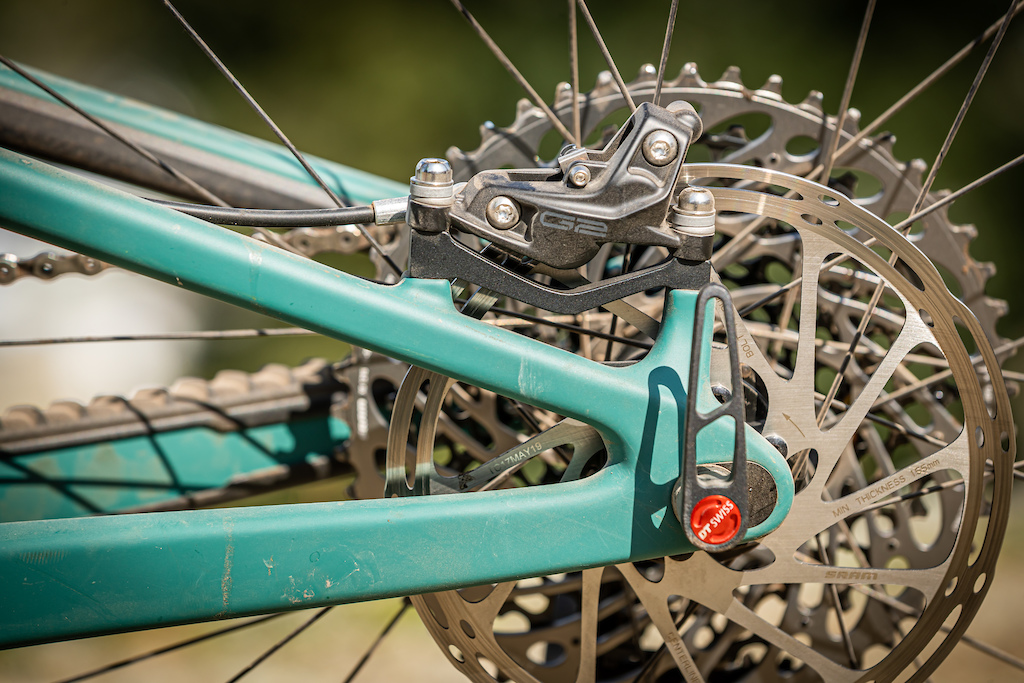 When comparing the 2019 Joplin to the previous generation Joplin, a Medium bike in the Low setting gets a 2.5-degree slacker head tube angle, 18mm longer reach, a 3.3 degree steeper seat tube angle, and an 83mm longer wheelbase.

Like the Santa Cruz Megatower, the carbon Joplin gets adjustable chainstays. Flip the chip on the non-driveside, swap out the brake adaptor and derailleur hanger and it's possible to set the chainstay length at either 430 or 440mm. The bike comes with the two different hangers and brake adaptors so that riders can fine-tune the stay length to their liking. If you'd like to roll on 2.6" tires instead of the 29 x 2.3" tires that come on the bike, you'll want to swap the chainstay to the long position to have enough clearance.

There's also a flip chip on the shock mount that can be used to raise or lower the bottom bracket while simultaneously steepening or slackening the head angle. The difference that chip makes is fairly minor – a 3mm BB height change and a .2-degree head angle change – but it does also make the bike's leverage ratio slightly more linear in the high setting, and a little more progressive in the lower setting. It can also be used to preserve the bike's bottom bracket height if a 140mm fork is installed – the height with a 130mm fork in the High setting is very close what you'll get with a 140mm fork in the Low setting.

The size Medium I've been riding comes with a 150mm dropper. 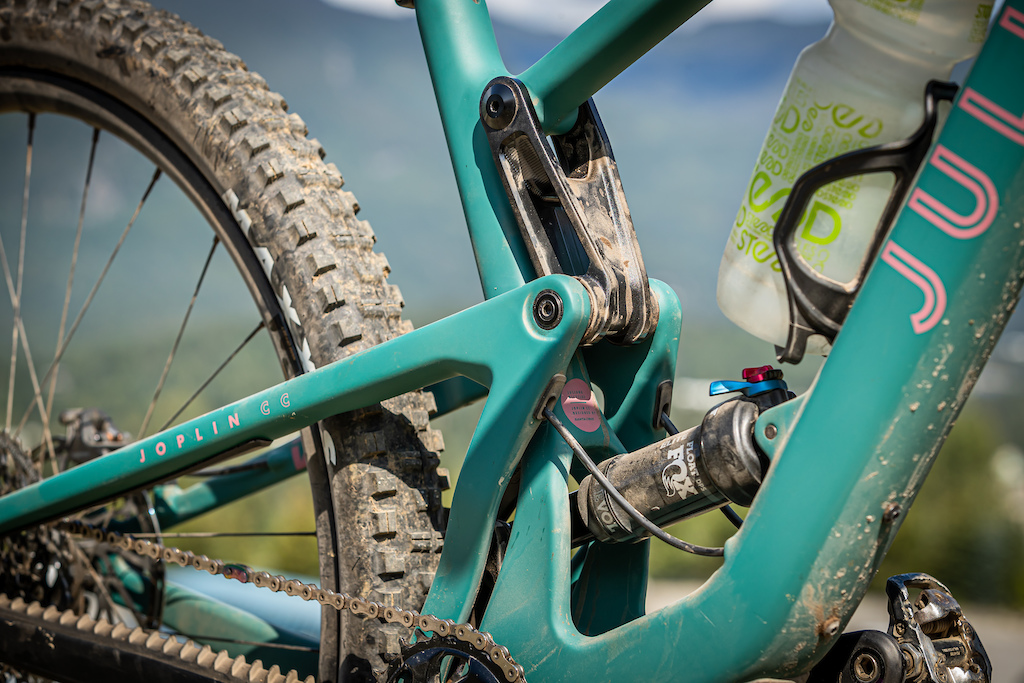 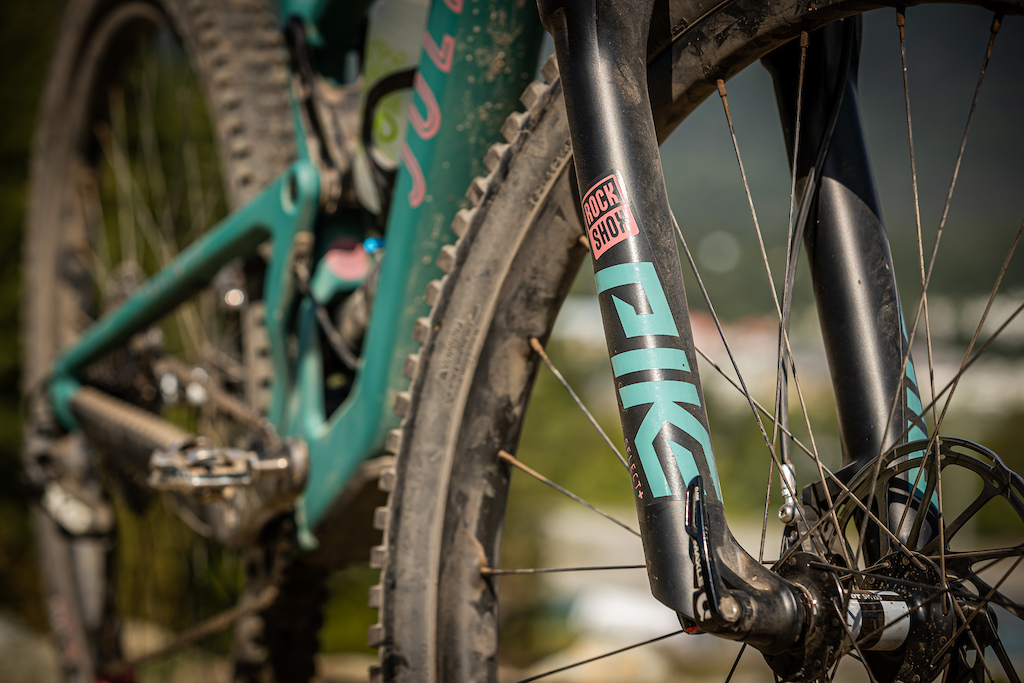 The new Joplin uses the same lower-link mounted shock VPP design that the Roubion, Maverick, and Strega use alongside all the engineering and geometry traits of the Santa Cruz Tallboy, but with a custom shock tune that was developed based on the leverage rate curve of the Juliana Joplin and the intended user of this bike.

The Joplin has the typically lighter Juliana rider in mind and its light tune offers a plush and smooth feel throughout the travel. The Joplin gets a Light compression tune compared to the Tallboy's Medium compression tune and a light rebound tune compared to the Tallboy's "LRL01" which is in-between Light and Medium. Both share the same volume spacer (0.4). 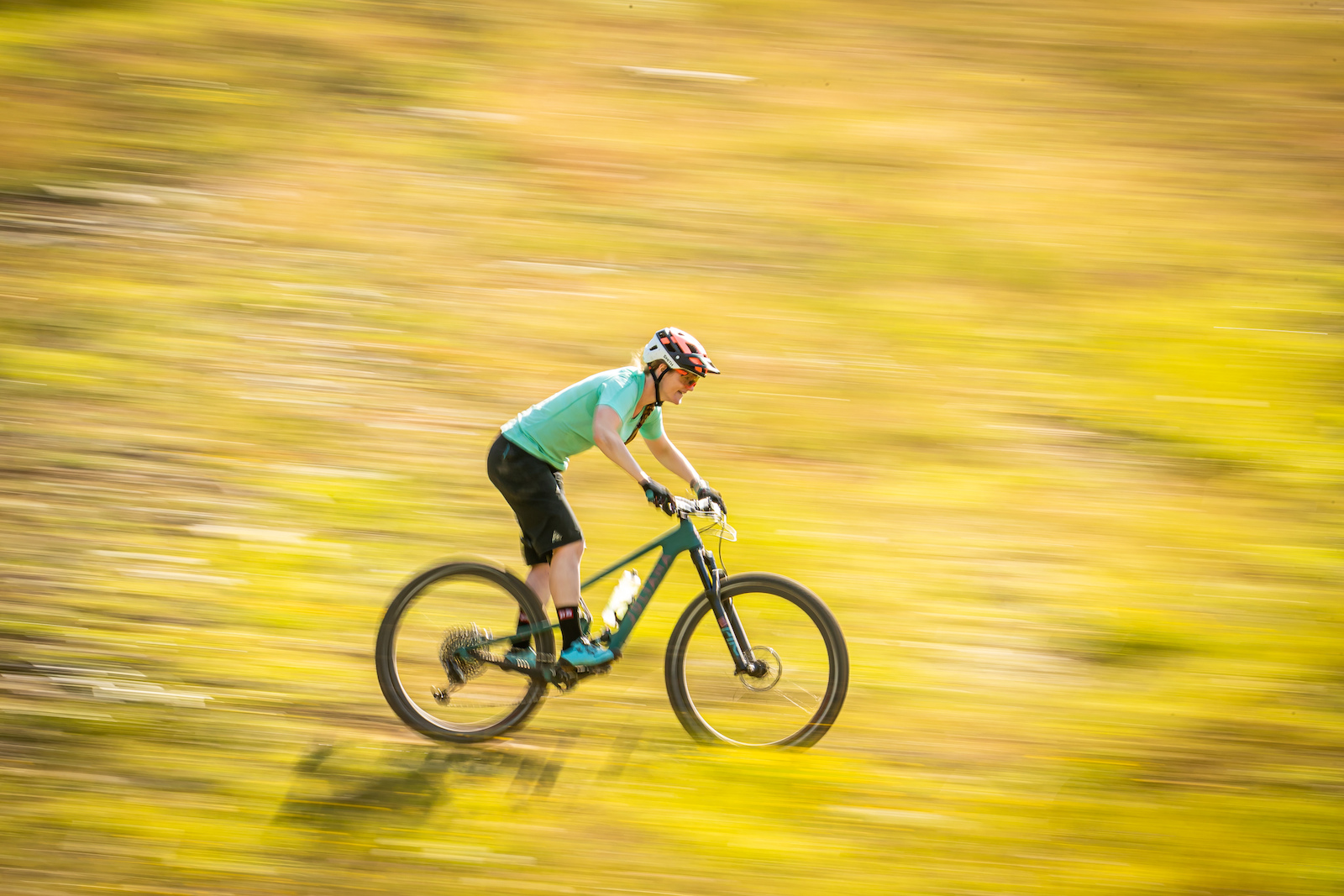 RIDING THE
JOPLIN
I've been riding the Juliana Joplin for the past couple weeks on my home trails in Squamish, British Columbia. The conditions have been near-perfect since we've had enough rain this summer to keep the trails tacky and smooth instead of the usual August dust bowls.

To stay away from the crowds that might spot the Joplin, I've been going out for early morning rides and staying to lesser-known trails. I thought about taking the Joplin on my pre-Crankworx madness Lord of the Squirrels alpine escape, but I was worried it would be spotted by the steady stream of bike-minded digital-savvy riders.

Instead, I've mostly been riding the Joplin in Valleycliffe, a lesser-known area of Squamish that's a bit of a maze, with punishing climbs and savage descents, many of which have been cut in by motos. A great place to see the limits of what 120mm of travel can do. 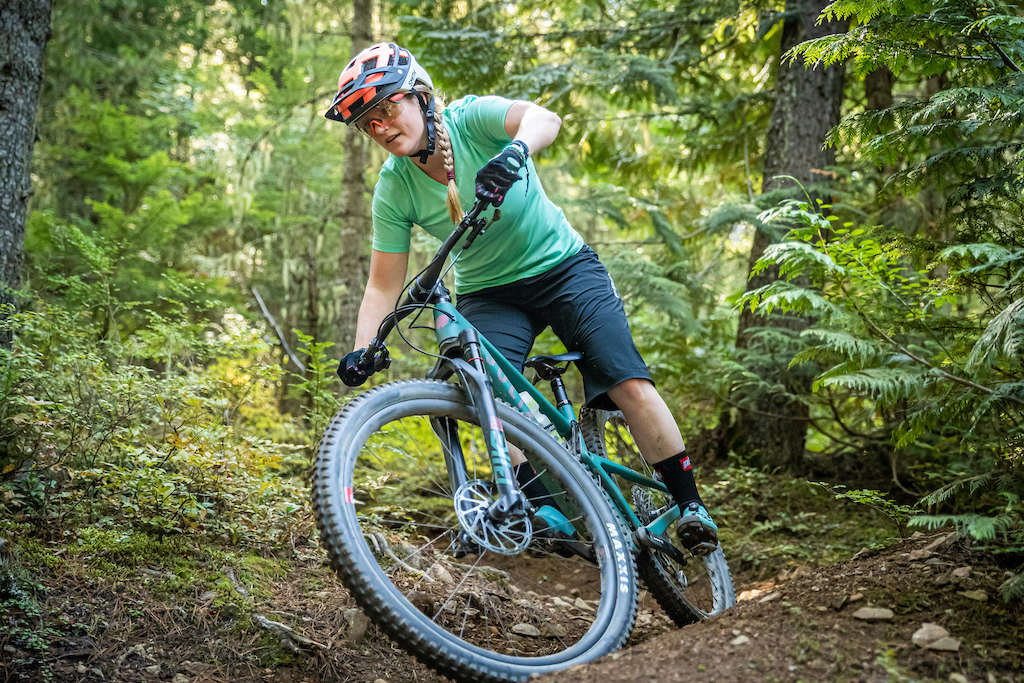 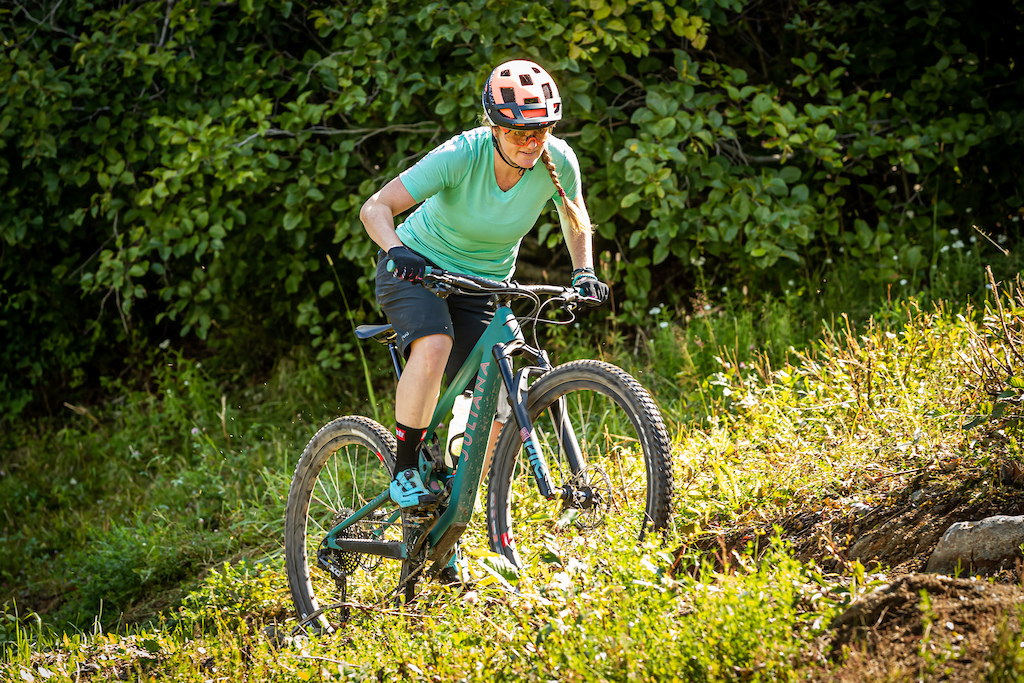 I've been riding the size medium Joplin in the Low setting with the chainstays in the shorter of the two positions. The roomy but not excessive 450mm reach feels comfortable and balanced when climbing. It's not quite as snappy and lightweight on the climbs as an all-out XC race bike, but the firm pedaling platform that stays calm under power makes it easy to put in the distance.

On more technical climbs, I've found that it doesn't have quite the same ground-hugging traction that the longer travel Maverick does, and you have to be a bit more precise about choosing your line in loose gravel and over roots so that you don't bounced get off of it or spin out. That being said, I've felt like I can keep climbing on the Joplin long after the point where I would usually have to stop to catch my breath. 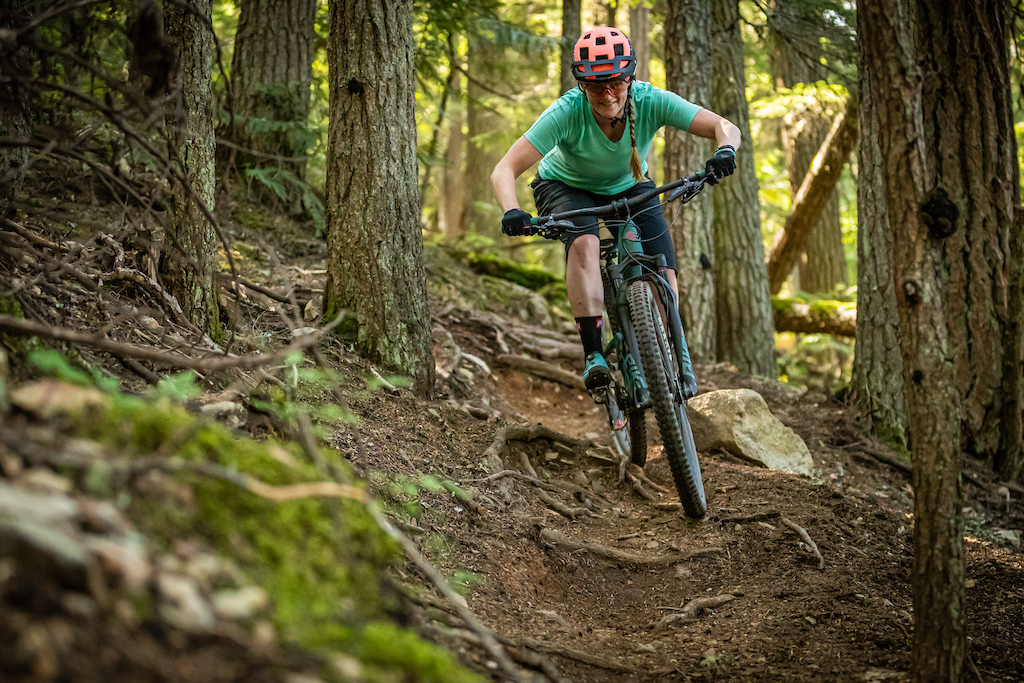 The descents are where the Joplin really shines. With a similar reach number and head tube angle to the Juliana Maverick, I felt instantly at ease pointing the Joplin downhill. I was conscious that it has 20mm less travel, but the solid feel of the bike, 65.5-degree head tube angle and well-chosen spec make it a confident descender. I've felt less confident dropping into black trails on bikes with a lot more travel.

The Joplin might only have 120mm of travel, but that doesn't mean you can't take it off of drops, down steep rock rolls and through a fair bit of chunder. It's no enduro rig, through, and is better suited to racing a technical stage race like the BC Bike Race than your local enduro. Even if racing isn't your thing, you'll want to compete against your friends on the Joplin and push the bike's limits. 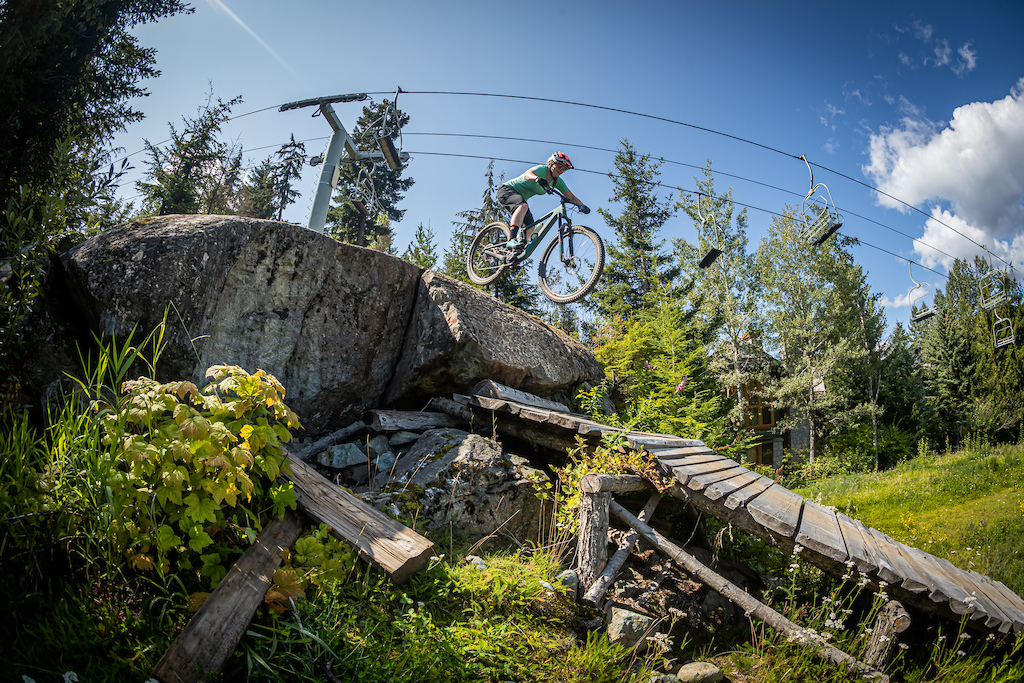 Visit the high-res gallery for more images from this article.

Powderface (Aug 20, 2019 at 0:14)
They should keep adding different models for every possible sexual orientation and then we can have 10 reviews of the same bike on the front page of pinkbike.

Like, I identify as straight but I previously experimented with bisexuality so can I have it painted black with maybe a slash of red, ziggy stardust, style?

i-am-lp (Aug 20, 2019 at 1:29)
Not only sexual orientation but genders as well I heard there is a whole flock these days! Also one for those that decided they don't want to pick a gender at all!

thenotoriousmic (Aug 20, 2019 at 6:49)
Literally the most pointless bike and review ever. Basically should just say it’s a tall boy with a bigger seat and no resale value.

nonk (Aug 20, 2019 at 7:23)
@powderturns: Yes, and it would be nice if they'd just put what rider weight the shocks are tuned for. Note that this reviewer is only 1lb lighter than Levy who reviewed the Tallboy. So it's a saddle and shock tune review. Sort of. I'm lighter than both, so would I be better off with the Juliana?

AyJayDoubleyou (Aug 20, 2019 at 9:45)
@nonk: Levy is 1 pound heavier but 3 inches taller and is thus on a large. If you consider only fit and healthy people (as both mike and sarah are) then women are only lighter by being shorter (on average), and if you go by BMI, women are generally higher on that scale. In other words, a 5.7 version of Levy (on a Medium tallboy) is going to be lighter than sarah, yet his bike came tuned for a heavier rider.

clink83 (Aug 20, 2019 at 20:30)
@AyJayDoubleyou: women are lighter because they have less muscle mass than men, and less dense skeletons. A smaller levy would still weigh more.

oskare (Aug 20, 2019 at 6:29)
Why don’t just make SC bikes with additional colors? I would love to get my XL SC bike in the much nicer Juliana colors.

demonsun (Aug 20, 2019 at 23:24)
I just ordered a Quincy, because I think the Stigmata colors are meh. The Quincy has an awesome paint scheme.

WAKIdesigns (Aug 21, 2019 at 12:26)
Progressives are blurring the lines between men and women as well as humans and Walruses

nonk (Aug 20, 2019 at 7:13)
Why isn't it lighter? 2 or 3 pounds may not matter to a 200lb guy, but it does to a 100lb girl. I get to be gender specific because this is called a women's bike. The shocks have a lighter tune assuming a lighter rider, but why not lighter wheels? Or a lighter frame layup? Women's seat is cool, but women's grips? What are they?
For my 100 lb daughter, the suspension is still probably going to need revalving and most shops will switch saddles out.
This is really a case of "shrink it and pink it"
I do like Juliana's colors better than Santa Cruz though.

skills25 (Aug 21, 2019 at 5:02)
Because that's super expensive. At this level of bike which is already really good, it's roughly $1000 per each pound you want to drop off the bike. Women's' hands can be smaller, so, smaller diameter grips. But yeah you hit the nail on the head... it's a branding gimmick. That said, it's a welcome branding gimmick because it isn't really just shrink it and pink it. It's an entire sub-brand dedicated to the sport, for women. I'll welcome that any day over the old days of Giant Liv which was literally all pink!!! My wife hated that stuff but approves of this newer gen Juliana style, for what it's worth!

Ttimer (Aug 20, 2019 at 4:56)
Are the Juliana bikes specifically designed to make bike journalists lifes harder by forcing them to come up with two synchronized reviews that don't contradict each other and don't sound copy pasted?

NotNamed (Aug 20, 2019 at 2:48)
All Julianas are just normal SC Bikes with different colour. If youre unter 5'11 you can get way netter Deals in the used market... Julianas are usually cheaper and Look better imo

Bahh (Aug 22, 2019 at 20:02)
Why the f&6k don't they just say "it's a tall boy with better colours and a large saddle" Jesus this woman's specific shit is getting out of hand, woman are being suckered into a whole brand because 'touch points'

sarahallen (Aug 20, 2019 at 8:47)
Hey @sarahmoore, mind sharing how tall you are? Just looking to compare sizing as it looks like I'm on the bubble between two.

hardtailparty (Aug 20, 2019 at 13:27)
Agreed, with the exception of the first pink bronson v2 and blue nomad v3. Those were pretty killer colors. If I buy a santa cruz in the future, I'll be searching for a juliana instead.