Looking like the honeycomb of an extra-terrestrial bee, this Fizik Antares Versus Evo 00 Adaptive saddle first caught our attention at Eurobike, but now we finally have concrete details on the saddle and the technology behind it as it has been fully released to the public. 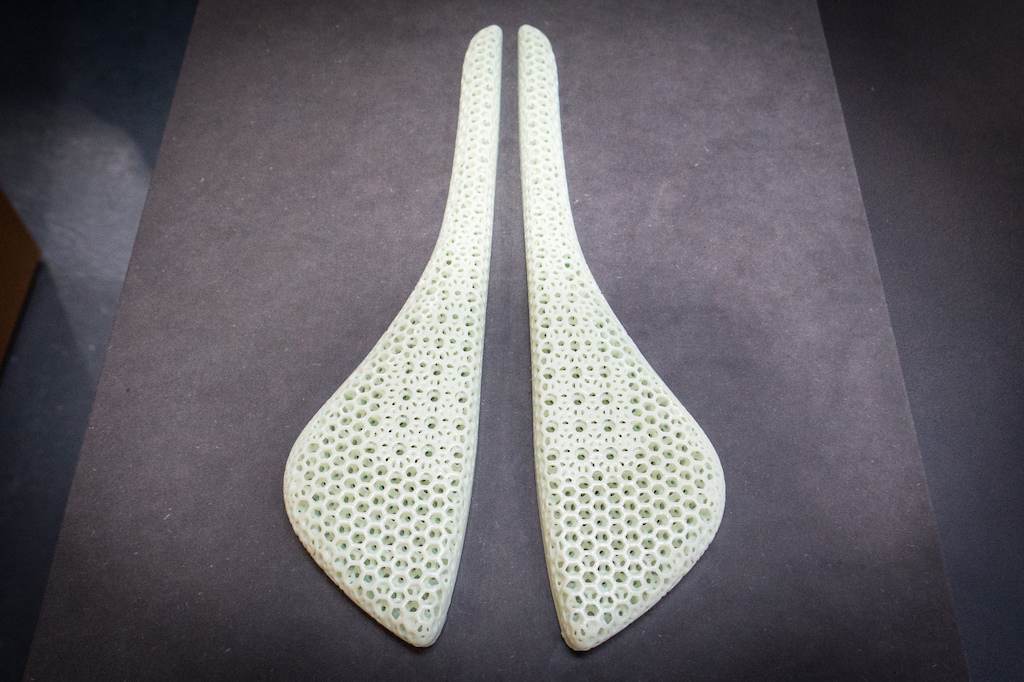 We got to have a good squish of the mesh at the Fizik booth at Eurobike.
The carbon body we have seen before from Fizik's existing Antares Versus Evo 00, but the interesting bit here is the 3D printed mesh that lies over the top. This has been created in partnership with a Silicon Valley company called Carbon and Fizik claims it is the first-ever 3-D printed saddle. Carbon use a process called Digital Light Synthesis that uses "digital ultraviolet light projection, oxygen-permeable optics, and programmable liquid resins" to create a mesh that sits on top of the saddle.

So why go to all this trouble for just a saddle? Fizik claims its all about having a much higher level of tunability than a traditional saddle. The mesh is softer in some parts of the saddle than others with various zones designed for comfort or support. Fizik goes so far as to say it has four distinct zones that have been created based on different bike geometries, riding positions, and riding styles. Down the line, this technology could be used to tune a saddle to each individual rider by taking biodynamic information during a fitting session. 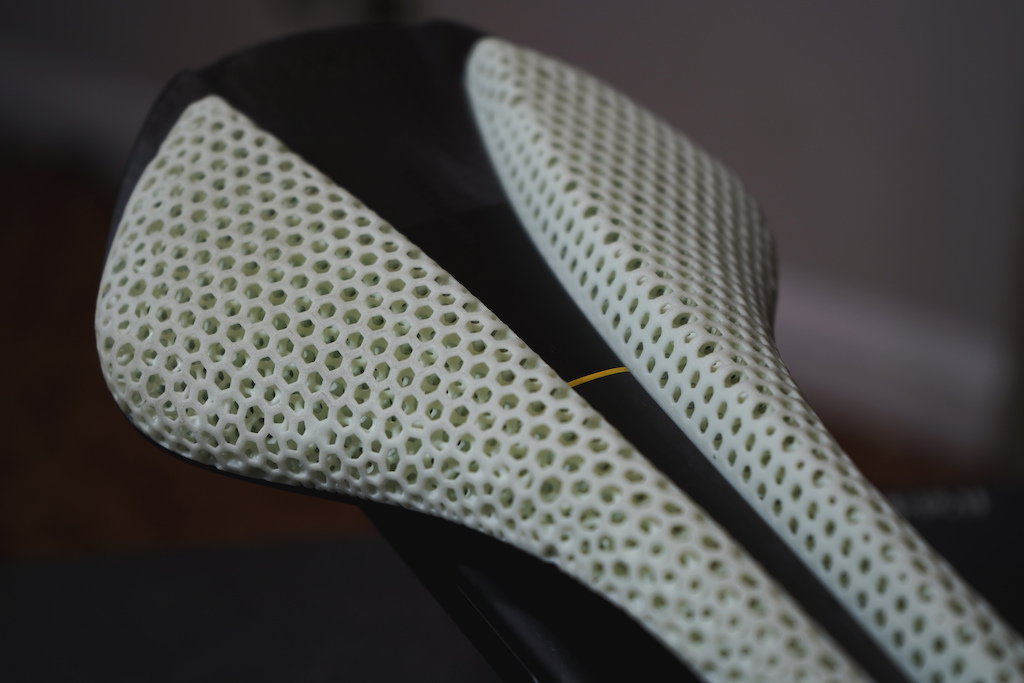 Fizik have been testing the saddle with its pro road teams and have apparently also subjected it to "the most severe tests, simulating accelerated weathering, UV aging and wear resistance." They claim that the mesh can be cleaned inside and out simply using a hose.

Fizik aren't the only brand using this technology, and Specialized also have their own version of a lattice saddle on the way too; there's more info on that saddle, here.

flyguyty (Feb 28, 2020 at 11:44)
even better if i dont gotta stand up to fart! some these saddles really squeeze the cheeks together

Drew-O (Feb 28, 2020 at 11:58)
Disappointed there's no option to have your undercarriage scanned with a laser and custom saddle made. Seems the least they could do for $400.

dglass (Feb 28, 2020 at 17:05)
Make sure you trust the fart, this design is prone to collect shart residue. It was designed to be cleaned with a hose, but depending on the case one may need a pressure washer...

WRCDH (Feb 28, 2020 at 22:28)
Now they just need to add some activated-carbon particles to the 3D printing polymer to absorb the most noxious fumes and any offgassing from accidental sharts.

I normally pay a lot less to have my taint exfoliated.....

mtbgeartech (Feb 28, 2020 at 11:02)
I need to invent an absurdly priced piece of bike gear that offers zero to minuscule performance benefit but will definitely be purchased by middle aged DINKs to impress their golf...I mean group ride buddies.

Additive Manufactured Aero Bashguards? (The AMAB I call it)

Transducer that creates vibration out of phase with any incoming vibration to cancel out the vibration? (3D printed or recyclable thermoplastic of course)

What's left that shouldn't be carbon but also isn't carbon? I'll make a carbon version of that and everyone will buy it.

pakleni (Feb 28, 2020 at 12:02)
Carbon bearings for Shimano pedals?
They will cost absurdly way too much and last only a week but you can offer a special discount of 30% for your old customers.
Because everyone likes to have a nice carbon parts and to save money at the same time

sethius (Feb 28, 2020 at 14:13)
Just add a unit for mild electrical stimulation to the private area for when those same gents privates go numb from a piss poor setup.

mtbgeartech (Feb 29, 2020 at 6:21)
@NotNamed: Well, the carbon has to be on the outside so everyone knows you have carbon so, carbon coated gold wheels.

They are also only available in 29" rims because turning and agility are overrated.

Lookinforit (Feb 28, 2020 at 13:01)
Isn't 3D printing supposed to make things less expensive???
Can't you buy a real seat like a la-z-boy for this money? Just ride a shitty saddle and buy a comfy 400$ chair at home to recover from the "inferior" ride

RoadStain (Feb 28, 2020 at 11:53)
Sir, the only appropriate place to stop shaving your legs is just below your eyebrows.

alexsin (Feb 28, 2020 at 13:53)
Ok so here is a perfect opportunity to make custom saddles. Take measurements, run through an algorith, produce perfect custom saddle. A lot of people would pay $400 for that. We have the perfect technology here for customization and yet they want to standardize its products. I think Fizik needs to think bigger.

oneloosecrank (Mar 1, 2020 at 11:05)
3D printing makes rapid prototyping cheaper because you can make something without buying the tooling first, then modify before you make the big investment. Really high end liquid printers can make end-use products, and cheap consumer printers can make chess pieces... But nothing you'd want to perform some functional part...

ChrisNJ (Feb 28, 2020 at 15:17)
It's always interesting to see new technologies. Like everything new, it's a bit expensive. And like all new things, it'll be cheaper in a few years. But as someone who does a lot of rando/gravel/road events, I'm curious if theres any noticeable difference. Or have we reached a point where these differences(improvements) are so small that it's not discern-able?

Pour whiskey? I'm on it!

cmb47 (Feb 28, 2020 at 13:50)
Hey you, guy out there reading this contemplating actually purchasing one. Stop ruining things for the rest of us.

jj12jj (Feb 29, 2020 at 15:45)
Lots of manufacturers will take returns on saddles. Fizik has dealers with test saddles that you can borrow for a little while. People may also own and like the lower tier version and decide to upgrade to the high tier if they need/want to purchase a new saddle.

silentbutdeadly (Mar 1, 2020 at 4:17)
For that sort of coin, I would expect it to cup my testicles and fondle appreciatively. However, since it is just a saddle...nope.

Fastfish11 (Mar 1, 2020 at 7:39)
Always impressed by what can be done with advanced technologies, can’t imagine that many if any are run out and drop
400+ on a saddle like this.

radrider (Feb 28, 2020 at 11:44)
Entre usual comments about being too expensive....
Revolution costs money. If you really are too dumb to see how this could be a game changer in comfort thats too bad. $400 carbon saddles are nothing new. Custom lattice structure designed for your specific body is something totally new and obviously beneficial.

iamamodel (Feb 29, 2020 at 3:06)
Scan your head and custom print the inner that fits into a stock shell. Great idea. Someone must have that in the pipeline.

P.S. Where TF is the Grim Donut story??!!!!? You guys better deliver soon.

artistformlyknowasdan (Feb 28, 2020 at 10:35)
Interested to try but but concern mesh would damaged in a crash