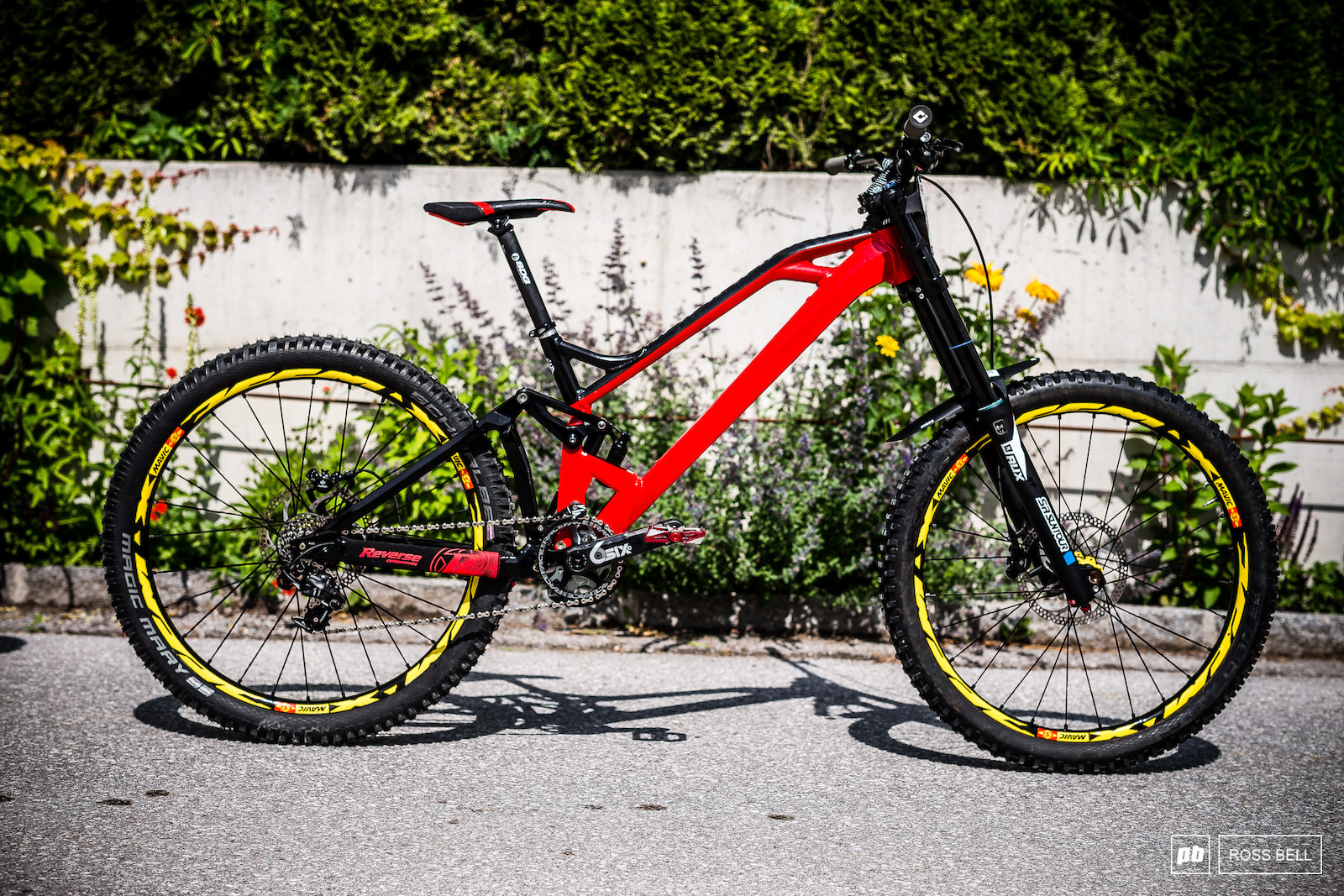 BIKE CHECK
Flo Payet's
Mondraker Summum
Flo Payet is one of the tallest racers on the World Cup DH circuit – at 6' 6” even an XL frame is typically too small for him. For that reason, Mondraker created him an XXL front triangle, then attached it to the stock Summum rear end.

It's somewhat surprising to see Flo back on 27.5” wheels after racing at Fort William on a 29” wheeled prototype, but it turns out that he wasn't happy with the suspension feel of that bike. The geometry was well suited to his lanky build, but Flo said it felt like the rear end was getting hung up and slowing the bike down, which isn't what you want when you're trying to win a race. At the moment he feels faster on the smaller-wheeled bike, so that's what he'll be racing on this weekend.

There's a month in between Leogang and the fourth World Cup round in Val di Sole, time that Flo and many of the other World Cup racers will be using to work on bike setup and get things ready to roll for the remainder of the season. 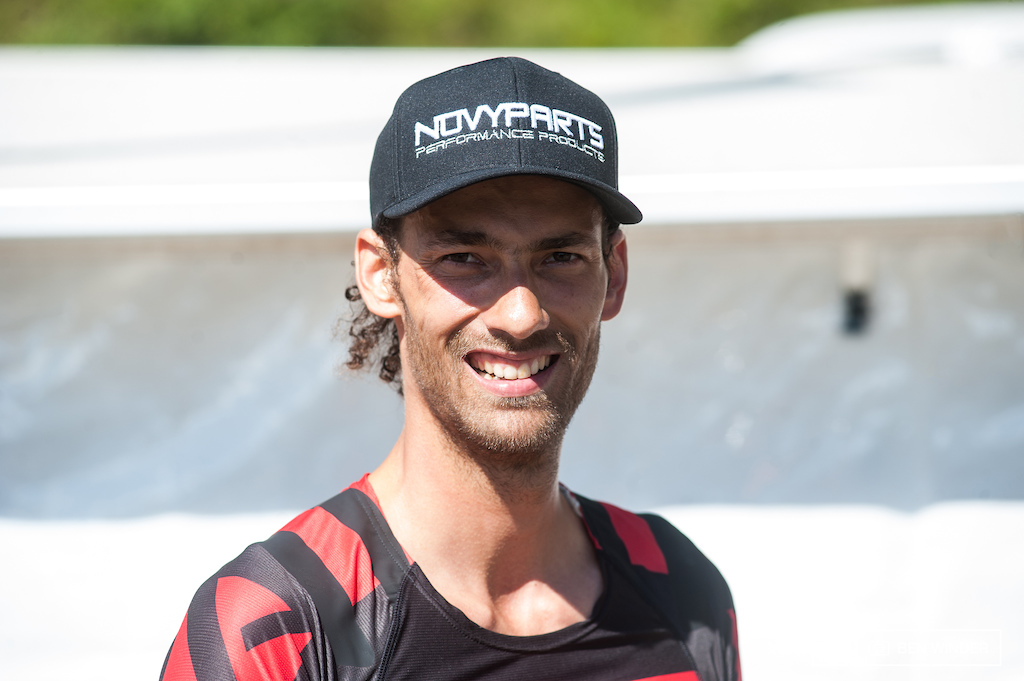 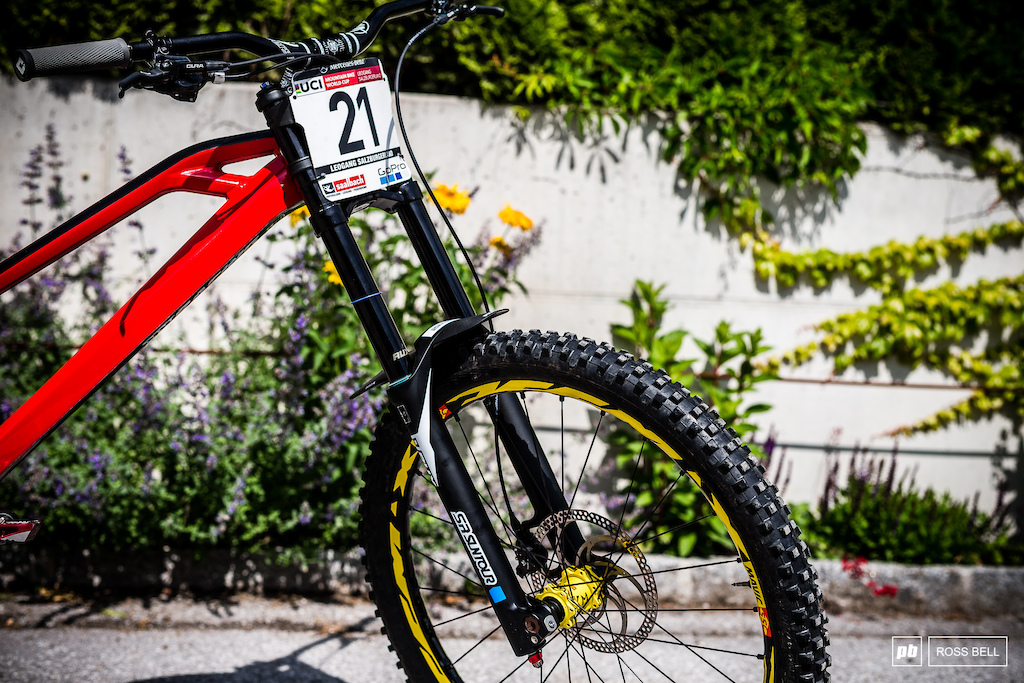 The SR Suntour Rux has been equipped with a custom damper cartridge that provides increased high-speed compression.
Flo's Summum Details 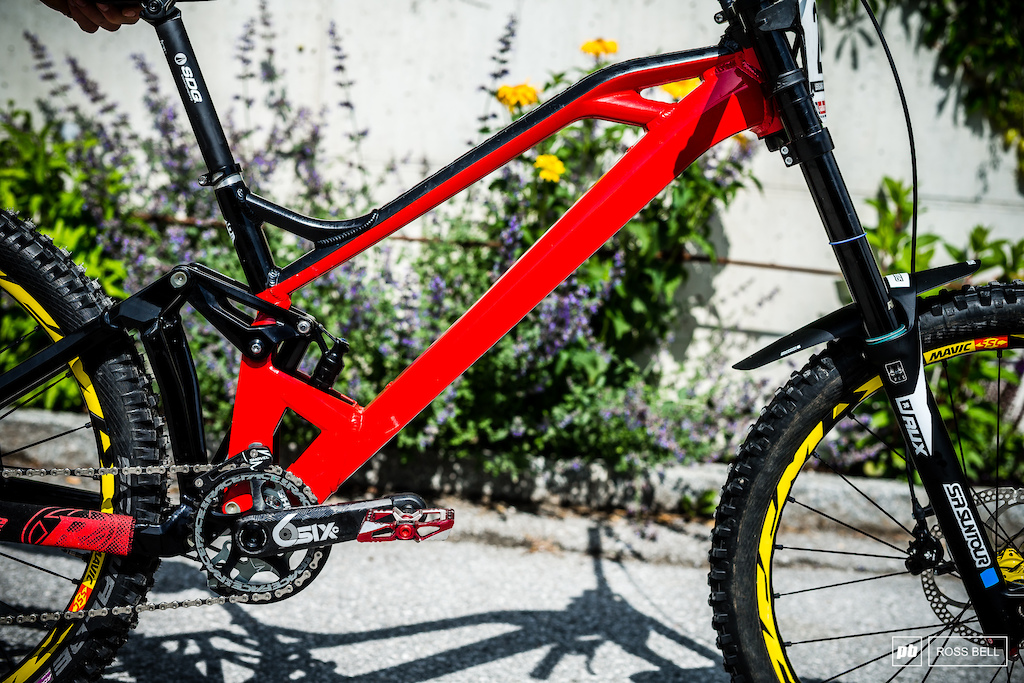 The distance from the front axle to the bottom bracket is 880mm. 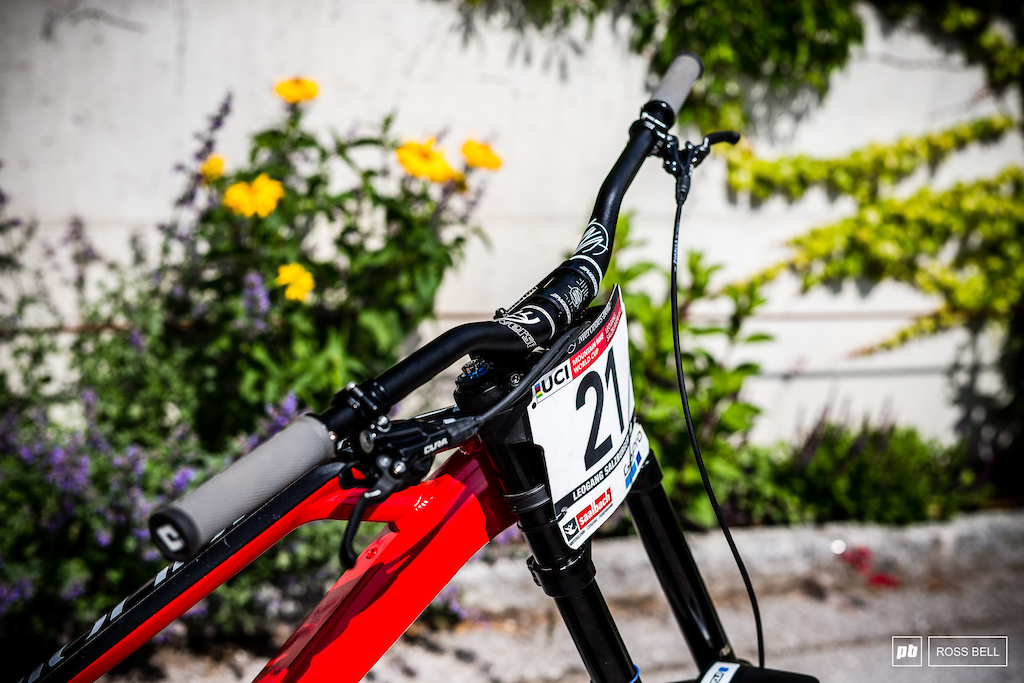 Even tall guys trim their bars down, but in this case Flo chopped 10mm off his custom 820mm Reverse bars, bringing the total width down to a mere 810mm. 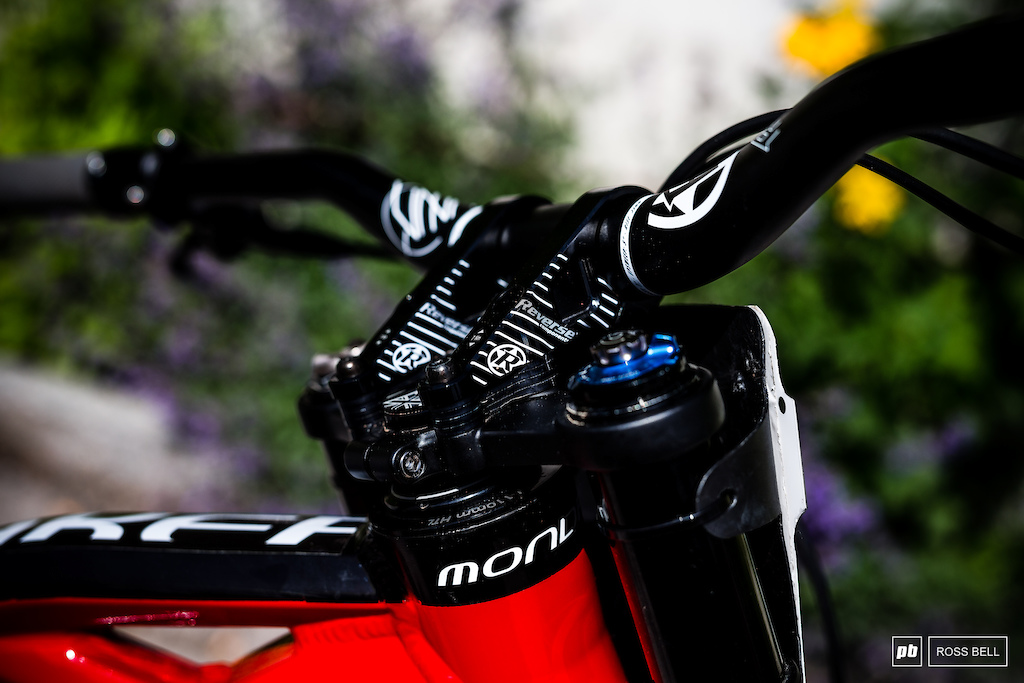 A 63mm stem from Reverse adds a little more room in the cockpit, and a -1 headset cup slackens the head angle to 62-degrees. 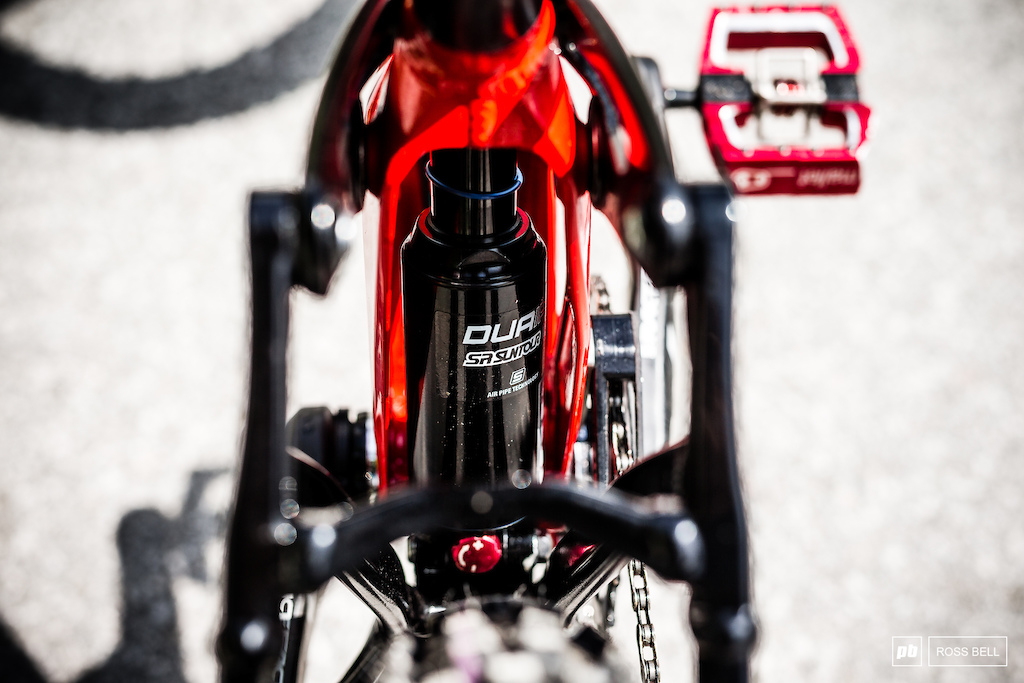 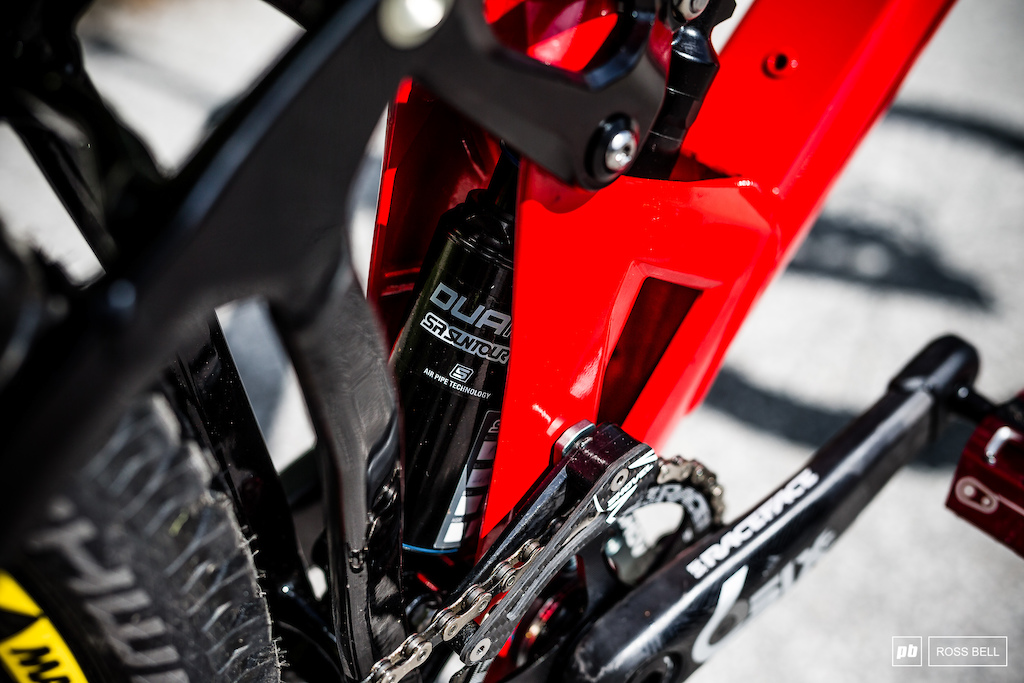 Florent has been working with SR Suntour on various projects for the last three years, including the development of a new DH air shock. 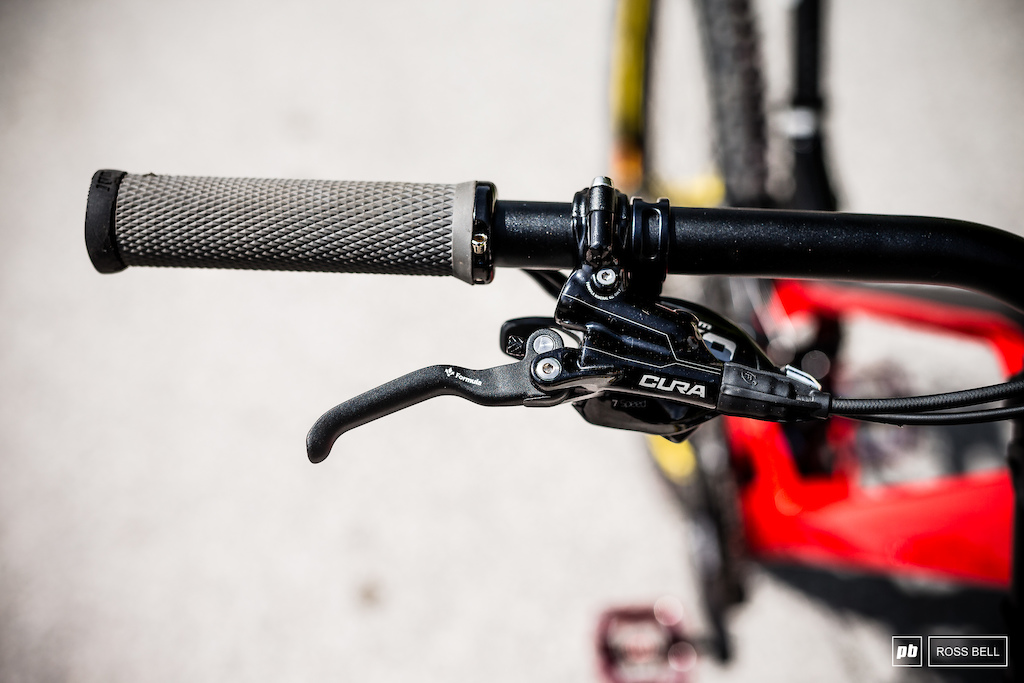 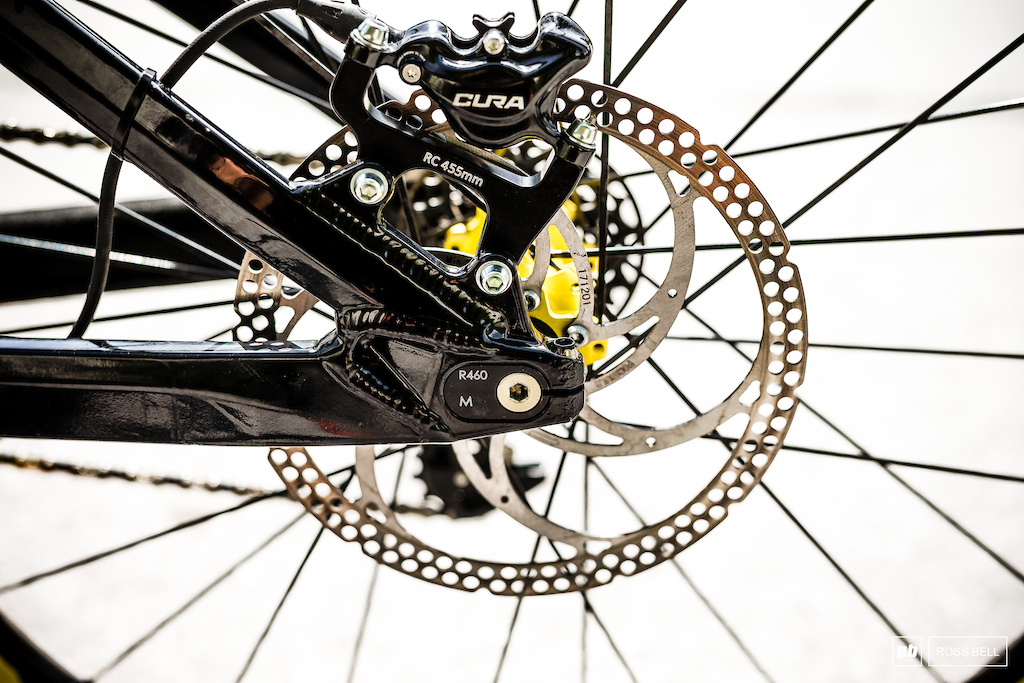 The bike uses a stock Summum rear end, with the chainstay length set to the longest 460mm position. According to Florent, he's comfortable with that number, but is interested in trying something even longer. 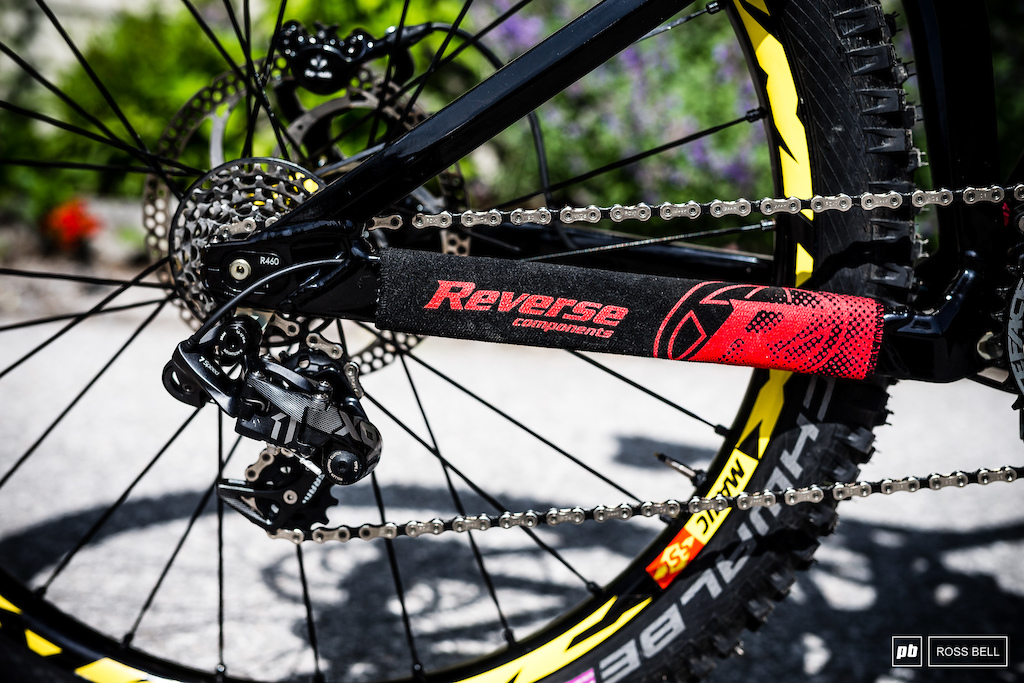 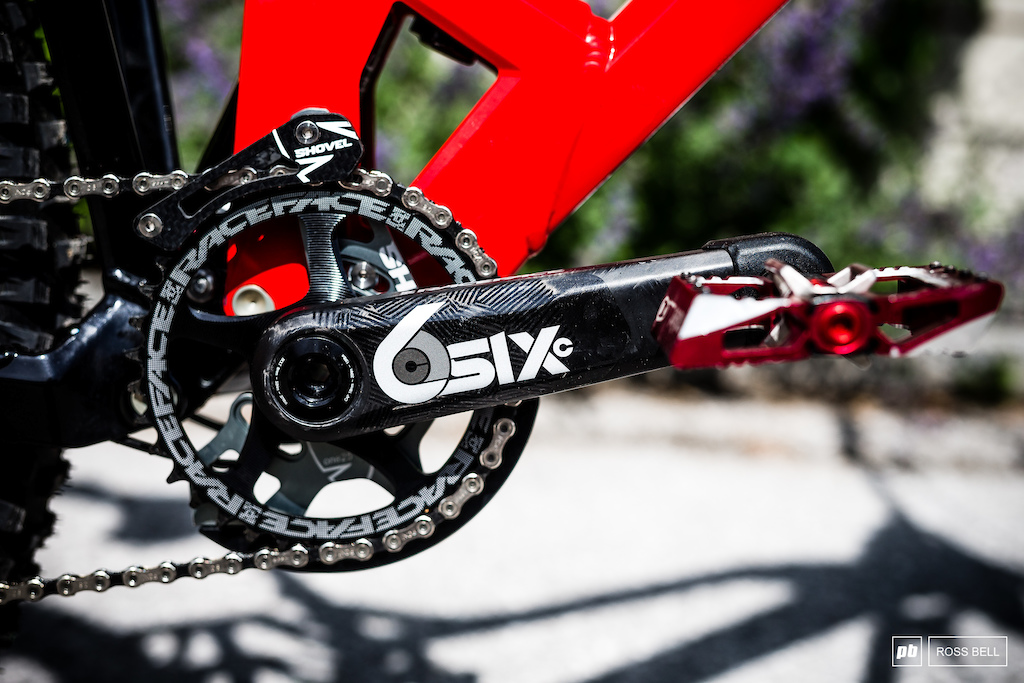 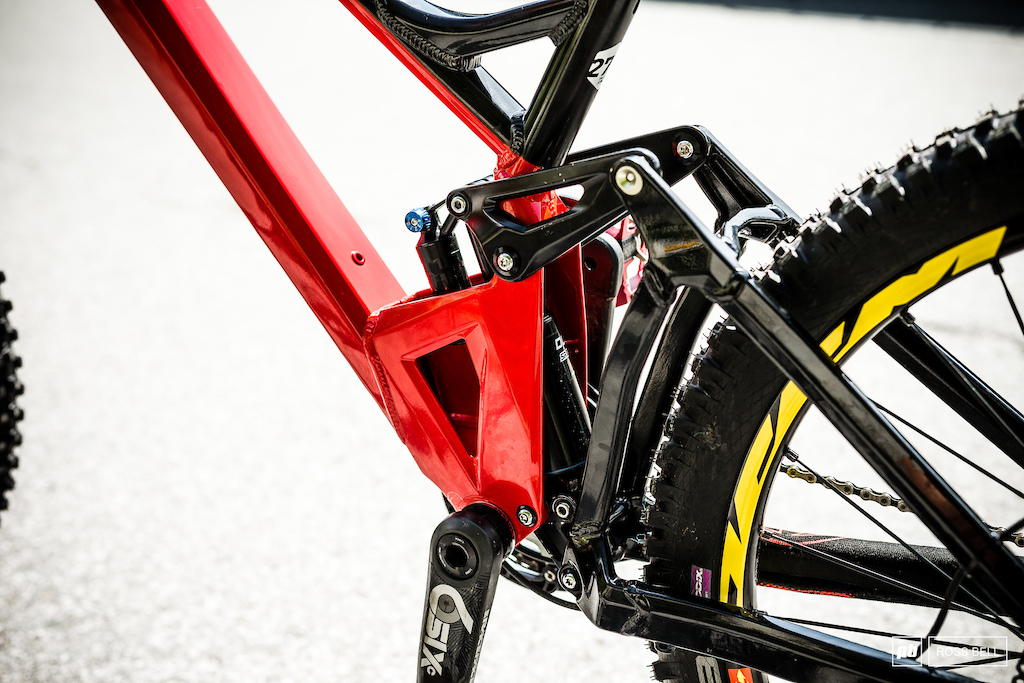 Add one more hole in the downtube and you might be able to fit a water bottle cage in there...


Posted In:
Reviews and Tech Mondraker

Tweet
Must Read This Week
A Complete Timeline of Coronavirus' Effects on Mountain Biking [Update: Taipei Show Goes Virtual]
126417 views
Ridden & Rated: 4 of the Best eMTB Motor Systems for 2020 - Bosch vs Brose vs Shimano vs Fazua
76915 views
Pinkbike Poll: If You Had to Ride One Bike for the Rest of Your Life, What Would It Be?
55518 views
[Updated] Mountain Biker Attacked by Grizzly Bear Near Big Sky, Montana
55274 views
Video: Claudio Caluori Tries to Keep up With Nino Schurter on his Home Trails
48543 views
15 Bike Checks from Craig Evans, Iago Garay & The Santa Cruz Free Agents
47984 views
First Look: Roval's 1,240 Gram Wheels Are Designed to Protect Your Tires
40872 views
CyclingTips Digest: Gravel Bike vs Mountain Bike, E-bikes vs Gravel Bikes, and Lego Bikes
39391 views

mangochaos (Jun 8, 2018 at 13:33)
Great to see! As a tall rider myself I am glad to see more and more options for us, especially given the progression of the industry. Lots of long travel 29er options getting longer and longer, that suits me just fine at 6'7''!

Primoz (Jun 11, 2018 at 21:36)
@pacificnorthwet: and the bent seat tube is not an issue? That's what's bothering me with the Mega (even the 27 inch version), since i hate bent/offset seat tubes that, at 800+ mm of seat height, put you effectively over the rear axle. And is the reason why i love the (27 inch) Aeris so much, since it has an effective SA of 76° with a real angle of 74°, which is a minor difference.

Finimac (Jun 9, 2018 at 3:53)
@GlassGuy: all these short guys not believing 4% body fat lol must not understand the struggle of ectomorphs!

jaame (Jun 10, 2018 at 16:05)
Any of you guys quoting body fat numbers had a flotation tank session and a cat scan to confirm it, or are you just guessing? I say that because measuring it to a single percentage point accurately isn't possible by eye or by standing on one of those bathroom scales with electrodes.

SintraFreeride (Jun 9, 2018 at 1:14)
My bike has the same wheelbase and same chainstay length but steeper headangle and it has a reach of 520mm so I bet his bike is probably 510mm. I agree that it isn't long enough for his height and we can see that by the 60mm stem he is running.

tbgd (Jun 9, 2018 at 11:58)
@alexsin Yeah but their recent DH bikes tend to have to quite short reach compared to their trail bikes so wasn’t sure.

Steve-skidvd (Jun 9, 2018 at 1:04)
Love Mondrakers for the fit, my Dune XL is just about right, you feel centred and not cramped at all.. and i'm 6'2"
I built up a VantageXR in a L for something a little more nippy, as an XC and general training bike, should have got the XL frame #kickingmyself #gobigorgohome

makripper (Jun 8, 2018 at 17:26) (Below Threshold)
@Asmodai: How can a unit of measurement have a mental disability? And if it does, using the R word is pretty pathetic.

If you had half a brain you would say 1.96m because efficient.

Asmodai (Jun 8, 2018 at 18:05)
@makripper: you see, metric system is so cool i can say 196cm or 1.96m or 1960mm it all means the same and is using the same base unit which makes it great for calculations and gives you proper sens of scale no matter how big or small something is

makripper (Jun 8, 2018 at 18:31) (Below Threshold)
@lifeofloon: why amen? He's not proving any. He's an idiot who thinks he discovered this new measurement system. Just wait until he explains volume conversions next. I can't stop laughing

lifeofloon (Jun 8, 2018 at 19:53)
@makripper: because the metric system is far superior if you think otherwise you're a dolt. All he did was point that out.

makripper (Jun 8, 2018 at 20:20) (Below Threshold)
@lifeofloon: who says i think otherwise? He didn't point out anything. He just said the imperial system is a retard which literally makes no sense. I live in CANADA. Here we use the metric system. Go f*ck off now.

lifeofloon (Jun 8, 2018 at 20:31)
@makripper: now that's a mature response. When you graduate high school let's talk about the practicality of the imperial vs the metric.

makripper (Jun 8, 2018 at 20:38) (Below Threshold)
@lifeofloon: says the guy who called me a 'dolt' and assumed i love imperial units of measurement. Who says dolt anymore? I haven't heard anyone say that since the 90's lol!! This is possibly the strangest and most pointless thread of comments I have ever seen! At least it's entertaining. You are pretty unpatriotic for not believe in the one true set of measurements. Imperial is what Jesus used and wants America to use. You are going to hell if you think otherwise

samjobson (Jun 8, 2018 at 23:47)
And here we have two of the male guys man species, who somehow have gotten all riled up over units of measurement. I love Pinkbike.

vinay (Jun 9, 2018 at 1:29) (Below Threshold)
@Asmodai: I know you like the SI system so much and that's all fine. But just watch your language. This was uncalled for. If we want to fight here on PB, we can already discuss Trump or NRA. But measurements have a practical use on a bicycle website so it isn't sensible to also use for insulting people or their preferences.

vinay (Jun 11, 2018 at 1:49)
@Asmodai: There's been a discussion a few days ago where people also went silly about metric vs. imperial. I grew up with the metric system, I work with it, it is nice and consistent. I know why people like it so much. But at the end of the day it still founded upon something quite arbitrary (the earth dimensions). So that's the basis of the litre, hence the kilogram (since water is so common), bar/Pascal pressure etc. And still not perfect, because of scientific progress. Why not base mass on the mass of a single proton/neutron? Why still have 360degrees in a circle once people realized there are just less than 365.25 days in a year (taking 24hrs for a day, even though it actually takes less for the earth to make a full rotation)?

The thing is, if you work consistently with one system of units, you'll end up with a correct result. If you do so with the other system, you end up with a correct result too. Sure there is a lot to say for everyone going with the same system. But I view that as something with different languages being out there too. Sure it would be pretty efficient if everyone would talk the same language. Pick something relatively consistent, common and easy to learn. Why not pick English. Personally I'd be fine with that. Just like I'd be fine with the SI system being the only system around. It wouldn't bother me. But I'd only speak for myself. Once someone is going to call someone elses language or unit system "retarded" it strikes me as arrogant.

Also, the brake bracket says 455mm while the dropout chip says 460... what's up with that?

CONomad (Jun 8, 2018 at 14:22)
He's super tall but he's also super thin... I'd be willing to bet he doesn't weight that much compared to some of the other riders (Gee for instance) so the single piston might be enough.

Primoz (Jun 8, 2018 at 23:45)
I'm 190 cm and between 75 to 80 kg. Florent is relatively thin and I'm surprised how he has the strength to ride world cups at that pace, but he's borderline to being too thin (body mass index), if it all. I'm a quarter of the way into the normal range of BMI. And BMI is a fairly useless metric anyway.

Zhehan (Jun 9, 2018 at 3:37)
@grntnckl: I should also add that I'm 54 and ride every day. I average 110+ km/week and eat healthily. But, my point stands. He's underweight for his height. As someone else stated, Chris Froome is 186cm and takes drugs to maintain his weight. I'm not saying he's doing the same, and everyone is different, but c'mon.

applepie (Jun 9, 2018 at 4:11)
@Zhehan: Well I know it is a very rough measure and really designed to be used as a mean across a sample so strictly I shouldn't use it in this context. But he has a BMI of 20.8 which is in the normal healthy range

Zhehan (Jun 10, 2018 at 11:45)
Obviously, my opinion on this matter is not popular, but here's the height and weight of some of his contemporaries, from Google: