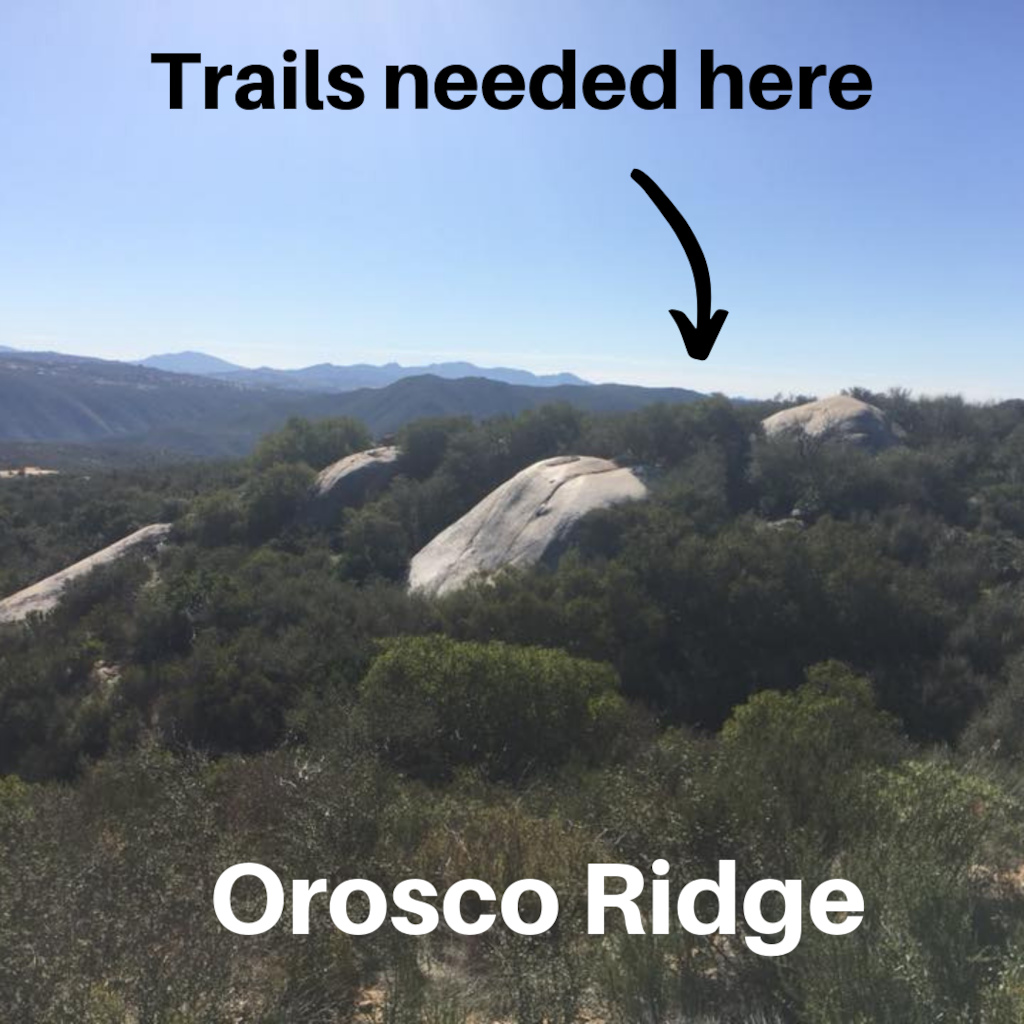 In November of 2016, three staff members of the Cleveland National Forest (CNF) attended a San Diego Mountain Biking Association (SDMBA) public advocacy meeting. They presented an idea for a possible trail network on Orosco Ridge located just north of Ramona in Pamo Valley. SDMBA staff and volunteers were very encouraged by the fact that the CNF came to us with a vision and the apparent will and intent to create a partnership with the goal of shared stewardship.

Today, 2 out of 3 of those staff members have transferred out of the Cleveland National Forest and with turnover in staff comes a massive resistance to any development of trails or recreational opportunities on the Palomar District or any intent by the leadership to engage with the community.

SDMBA is not giving up on this project when we have come this far. As a partner organization with the US Forest Service, we followed the rules, signed the agreements, raised the funds, did the legwork, and now we fight for what we believe to be the best opportunity for significant new trail construction in San Diego.

This project ramped up when SDMBA received a Letter of Intent in February 2017, signed by Will Metz, Cleveland National Forest Supervisor. In July of 2017 a Letter of District Priority from the USFS, signed by Chris Dowling, Palomar District Ranger, stated that the Pamo Valley Orosco Ridge Trails planning NEPA would be included in the 2018-19 Program of Work as one of the top three overall district priorities. In the spring of 2018, the public comment period generated over 550 comments with the vast majority speaking in favor of trail development in this area.

In good faith and trust in the partnership, SDMBA raised more than $70,000 from events, individual donations, including a grant from REI ($15,000) that would allow us to hire IMBA Trail Solutions, a professional, independent design firm as outlined in the Letter of Intent, to create the conceptual Pamo Valley Master Trails Plan. Then, Drew Perkins of Santa Cruz, was hired to create the focused trail plan for the Orosco Ridge area. The required NEPA (National Environmental Policy Act) studies were started by USFS staff in mid-2018 that were completely funded by SDMBA as outlined in the formal Collection Agreement signed by SDMBA and the USFS in January of 2018.

In the fall of 2018, a new district ranger was hired for the Palomar District. In addition, the Supervising Ranger for the Cleveland National Forest took an out of state position. We knew that changes in staff could potentially mean a slow down as we cultivated new relationships and made our case for the project. We had several meetings but the impression was that trails were not a priority and there was a pronounced reluctance to work on perceived issues with the project.

On August 1, 2019 with no advance warning to SDMBA staff or volunteer leadership, a letter from the District Ranger of the Palomar District, was posted on social media quickly grabbing the attention of the community. This letter stated that the project was not viable and all progress would be halted. After this unprofessional communication, the acting Supervising Ranger sent an additional letter reiterating the cancellation of the project to SDMBA Executive Director Susie Murphy. To say we were blindsided is an understatement.

We believe the reasons stated for cancellation of the project can be overcome and mitigated through cooperation and problem solving. Parking, bathrooms, trail alignment adjustments to protect resources or avoid other constraints are all issues that can be resolved by willing partners for any project. Other reasons cited in the letter of cancellation were changing Forest Service priorities, reduced budget and staff capacity, and the CNF program of work.

In stark contrast, we want to highlight the fact that we have a highly effective ongoing partnership with the Descanso District of the Cleveland National Forest. The Mount Laguna Trails Plan is going through the same process and regulatory requirements that the Orosco Plan was. Under a collection agreement between SDMBA and the Descanso District, SDMBA is providing funds, raised through a grant from REI and proceeds from the Mount Laguna Trail Fest, to pay for the staff time to complete the NEPA requirements. This partnership is thriving under the effective and innovative staff who see the immense benefit of providing new and improved sustainable trails in the Mount Laguna Recreation Area.

SDMBA’s goal is to continue to pursue the Orosco Ridge Mountain Bike System Project with the Cleveland National Forest.

In order to do this, we are working on an aggressive communication plan to USFS leadership at the highest levels, elected officials and other community partners which will include media outreach.

Read more about the project including linked documents

How you can help

We are asking our members, donors, sponsors, partners, and all concerned trail users to call and/or write to express their opinion of the decision to cancel the project by using this legislative contact template. https://memberleap.com/action.php?orgcode=SDMB&laid=317399

Thank you for your interest and support of more legal trails in California.

Scepticshock (Aug 7, 2019 at 13:19)
Thank you PinkBike for posting this. San Diego faces one of the most repressive trail building environments in the country. Just when you think it can't get worse...

Samanderson511 (Aug 7, 2019 at 20:32)
Come to Orange County. We pay some of the highest taxes in the United States yet we can't use the trails we pay for. It's like paying for a bike that the bike shop won't let you ride. God forbid that we have cool trails that people enjoyed riding. We have a bunch of Snow Flakes running this state.

gus6464 (Aug 7, 2019 at 13:15)
One of the complaints was quite baffling. Apparently long bathroom lines at the parking lot? The stupidity is real on that one.

Meettaco (Aug 7, 2019 at 13:47)
Almost all of Socal has this problem. It is apparent that we need more trails and we have plenty of open space. It is mind numbing....and very political.

unrooted (Aug 7, 2019 at 14:45)
s the Forest Service in the San Diego area made up of a combo of anti-mountain bike Sierra Club hardliners and Horse people like it is where I live?

susiemurphy (Aug 7, 2019 at 15:13)
Actually much of the newer staff are mountain bikers, climbers, trail runners and such. This is one of the reasons we are making some headway on the Descanso district of the Cleveland National Forest. Rangers who have recreation backgrounds and actually get outside to recreate is the key. Sierra Club is a different story and they are opposed to most all we try to do if they can tear themselves away from their litigation activities.

susiemurphy (Sep 8, 2019 at 16:00)
9/8/2019 Orosco update from SDMBA: Since receiving news of the cancellation of the Orosco Ridge Trail Project at the beginning of August, SDMBA staff, volunteers, members and other interested trail users have been taking action. This has resulted in the attention of one congressional representative and a meeting with the Forest Service on the calendar for early October. This meeting will involve the new Forest Supervisor, District leadership from Palomar and Descanso Districts. The goal of this meeting is to find a way forward for trails within the Palomar Ranger District.
The Palomar Ranger District has sent us a refund of close to $9,000 for staff time billed to date on this project. This is a fraction of what we have spent to date on this project. We have put these funds and all remaining money for this project aside for trail projects within the Palomar Ranger District.
We will continue to provide updates after our meeting in October and outline a plan on how to move forward with the Palomar Ranger District.

VFox (Aug 7, 2019 at 16:13)
sad to hear the news. SD MTB trails network always under pressure and wins seem so few and far in between. Still sad I never got to ride Anderson during it's heyday and it being deprived for the younger generation.

susiemurphy (Aug 7, 2019 at 17:59)
ATT will have it's revival. FS all fine with the trails currently on their land. No access to trails formally on tribal land. Now the work is to create legal access from the bottom. We are getting close. Only a couple of parcels left to acquire by the County and other partners. It will happen.

bikebike69 (Aug 7, 2019 at 15:04)
I’ve never understood why SoCal is so anti bike while NorCal is at least better about building bike parks and finding solutions.

susiemurphy (Aug 7, 2019 at 15:10)
hard to make blanket statements in any area. Advocacy is a nuanced issue and progress is hard. In stark contrast to what is happening with the Orosco Ridge Project on the Palomar District, we want to highlight the fact that we have a highly effective ongoing partnership with the Descanso District of the Cleveland National Forest. The Mount Laguna Trails Plan is going through the same process and regulatory requirements that the Orosco Plan was. Under a collection agreement between SDMBA and the Descanso District, SDMBA is providing funds, raised through a grant from REI and proceeds from the Mount Laguna Trail Fest, to pay for the staff time to complete the NEPA requirements. This partnership is thriving under the effective and innovative staff who see the immense benefit of providing new and improved sustainable trails in the Mount Laguna Recreation Area.

susiemurphy (Aug 7, 2019 at 12:43)
we agree. We are not giving up. Shared stewardship to get trail projects done is the only way forward that the USFS has!
Post a Comment