by nsbillet
Views: 33,016    Faves: 745    Comments: 46
After spending the better part of the year hopping on planes, dealing with busy airports, train stations, roadways, chasing down accommodation, checking in and out all over the world, the off-season can be a very welcomed period for a racer. For many World Cup athletes, Fall in the Northern Hemisphere becomes something they look forward to—a reprieve. It grants them the opportunity to slow life down a little; time to look back on the season, reassess goals, analyze performance, and just ride their bike for the simplicity that it began with—fun. This time of year also gives them time to do so with few people around. 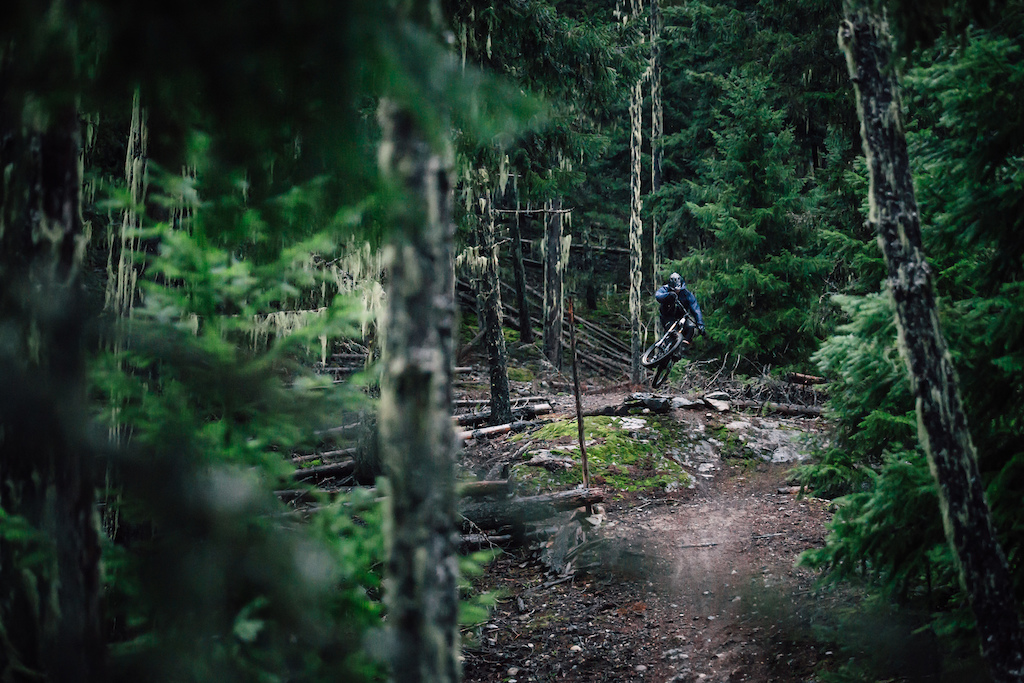 To many, riding has everything to do with being social, outdoors surrounded by a group of friends and enjoying a common interest. For those that spend their lives riding, chasing peers, pushing against the clock, racing, all while living out of a bike bag, those very moments need to balance out. Personal time becomes harder to find and the importance of peace and quiet, time to reset and getting back to the personal joy of being on the bike for nothing other than being in that moment, can easily be forgotten. 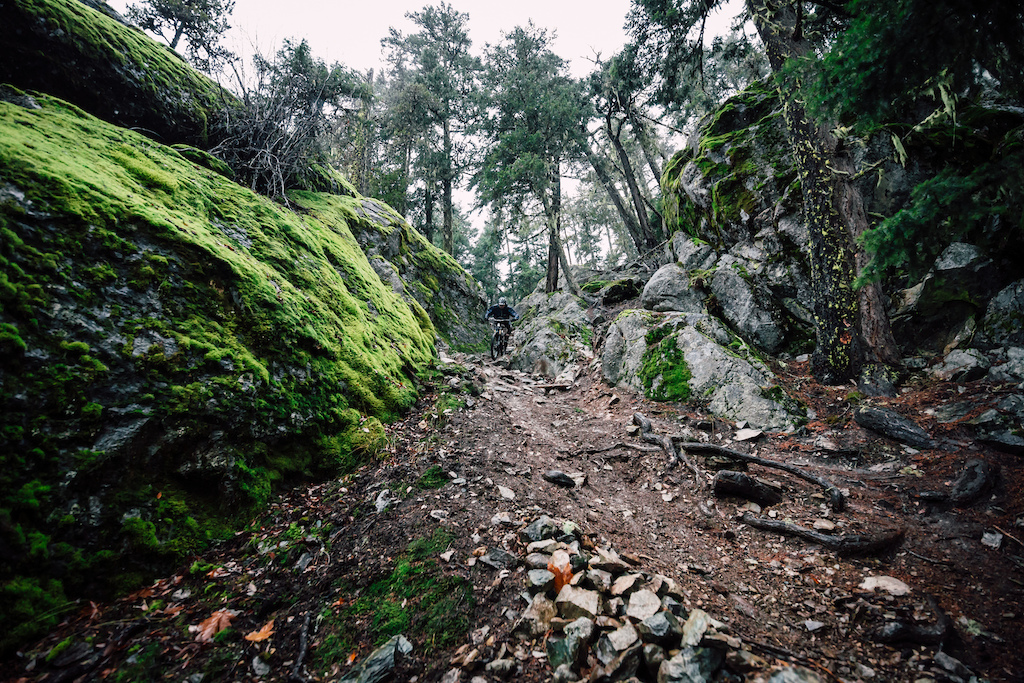 Forrest Riesco is from British Columbia's Sunshine Coast; Gibsons to be exact. The quiet, coastal town and relaxed community have rubbed off on him in more ways than one could imagine. He doesn't shout about his riding abilities, won't even talk about it unless provoked, doesn't boast—he's humble almost to his own detriment, but his riding speaks for him. It shows strength and confidence that many could only dream of, on or off the bike. 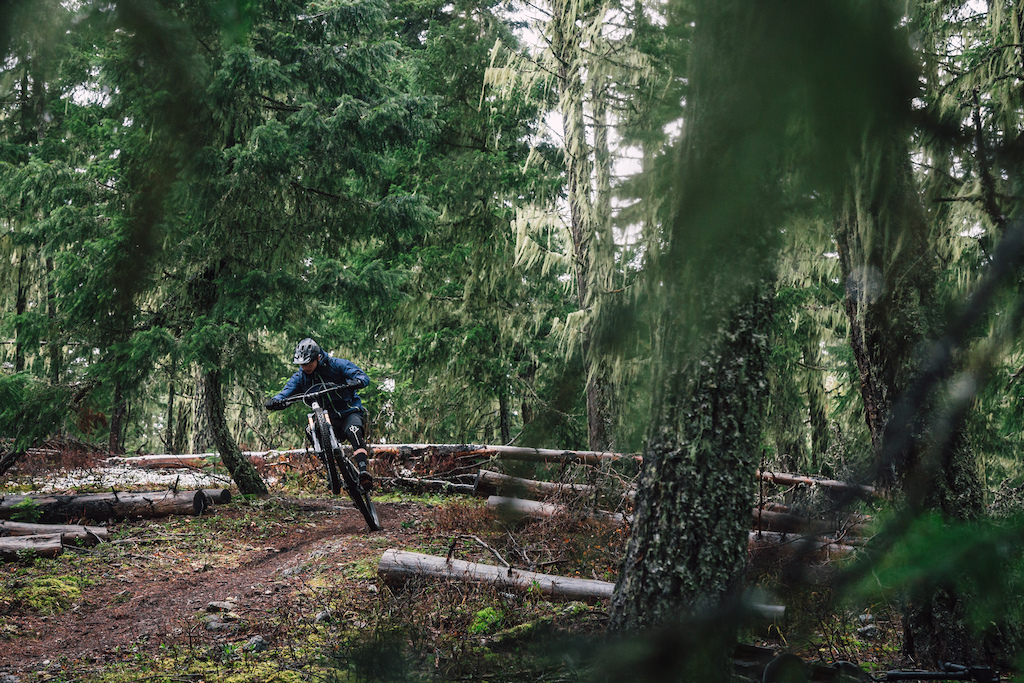 Forrest has been quietly chasing the downhill dream since his teen years and has been hitting the World Cup circuit as a privateer for three years now. So much of his time is taken up planning and training for the next season, but luckily for him, a big portion of that means being out on the bike. To help keep the dream alive he does work during the off-season, but still finds himself forced to ride alone, with close friends holding down 9–5 routines. If peace and quiet weren't something he sought, it's certainly forced upon him, in a gentle push from fate. 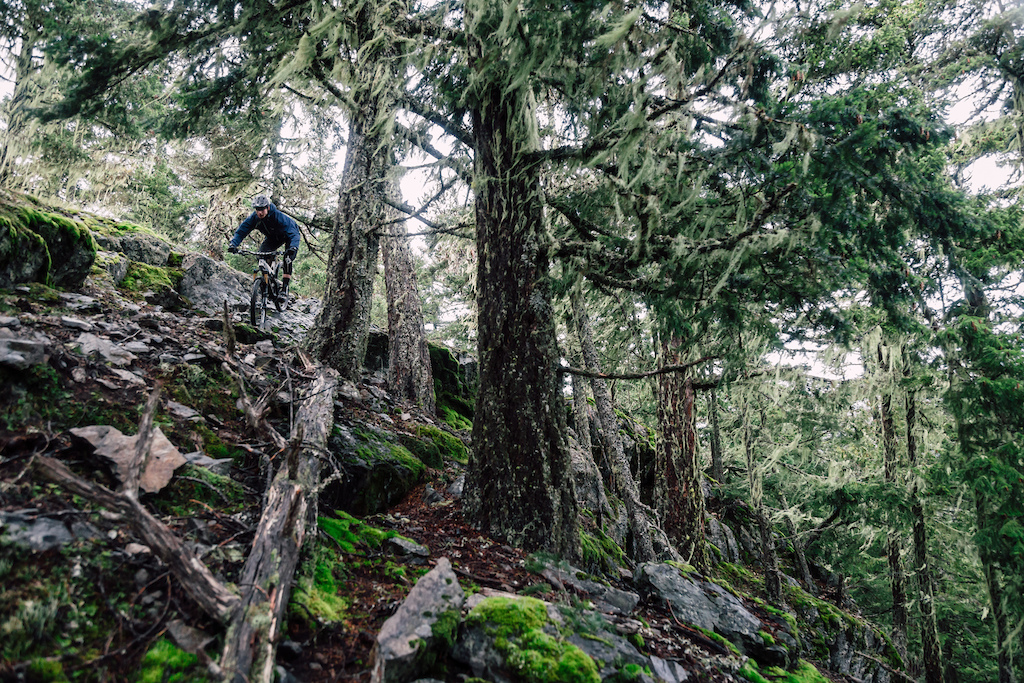 His time at home brings him back to the pace he grew up knowing, while the trails on the Coast and a short ferry ride away give him plenty of opportunities to continue to hone in his riding and keep that pace up. Riding alone during the fall is his chance to do what he wants when he wants, and how he chooses. These moments of solitude are as vital to his riding and training as hitting the gym and squeezing out seconds against the clock. 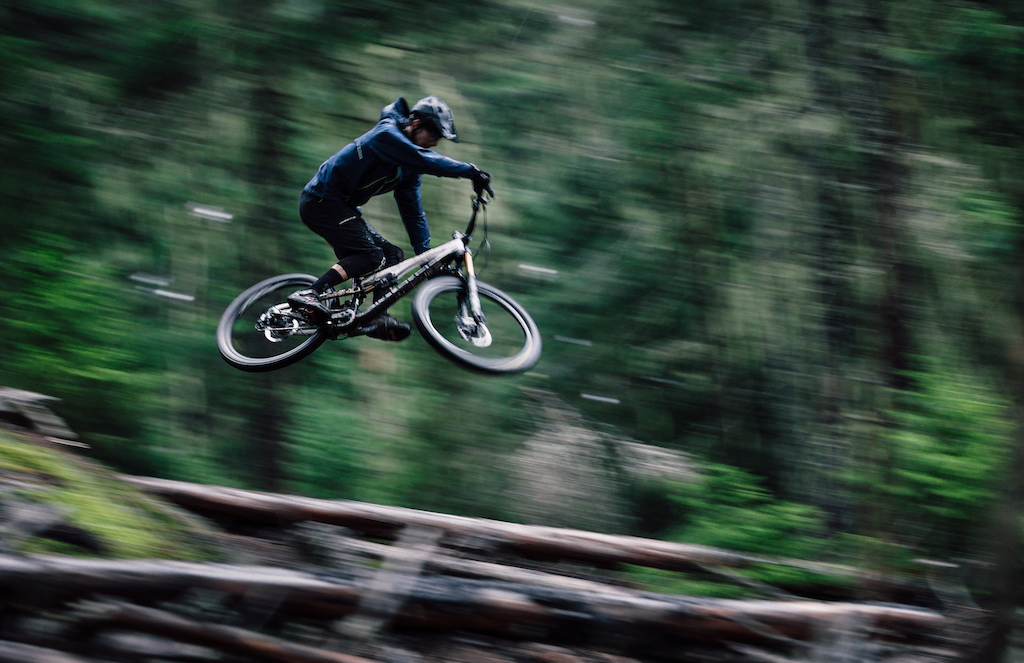 Many of us could learn plenty from Forrest; whether it be the humble, egoless attitude, the work ethic, or the importance of taking a moment, or two, for yourself once in a while. Detach a little and allow the opportunity to remember why riding a bike is so enjoyable. It's the simple things in life. 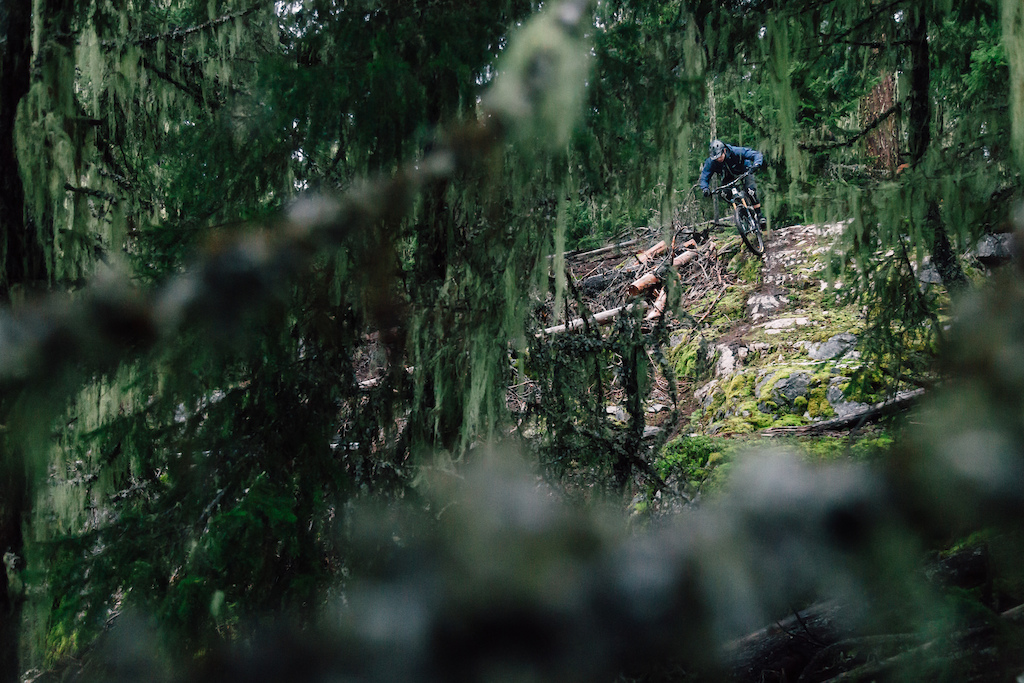 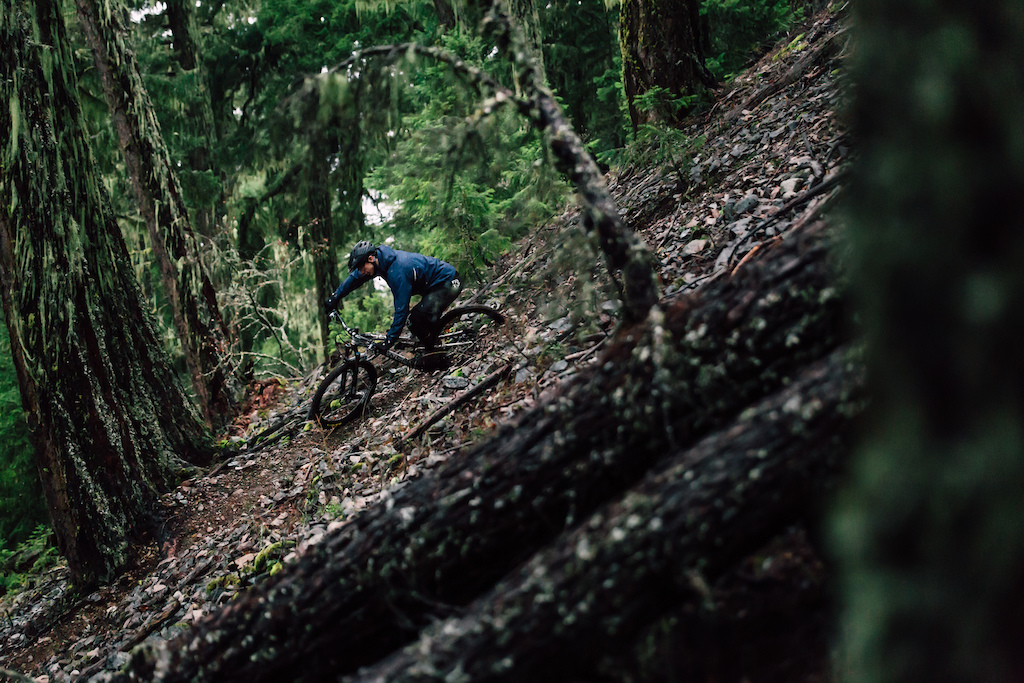 SamJT (Feb 3, 2017 at 6:04)
Guessed the password was solititude in 2 attempts, very proud of myself. Also from a filmmakers perspective, that was very nice to watch indeed, really nice soundtrack, sound design and grading, can I ask who produced it?

that was amazing filmotography, i had to share it
wow. i am stuned. really braking the standard ver creative as well, i could see the little story line beind it, very nice and motivating

ejflyingeye (Feb 3, 2017 at 7:30)
Outstanding edit, anyone who has ever ridden a bike to get away can appreciate this one.

conv3rt (Feb 3, 2017 at 6:15)
Continually amazed by the quality of free content we enjoy. Wish you success this race season, Forrest

joepax (Feb 3, 2017 at 7:56)
Damn, that was beautiful. From the solo shred to the wet and gloomy conditions, it was all so relatable and very well done. Nice work.

hpiguy (Feb 3, 2017 at 7:37)
These types of videos are some of my favorites on PB because they represent what a lot of us do on our bikes. Not all of us are ripping DH runs all the time. (not that anything's wrong with that, just not the kind of riding I do)

Kingdevin (Feb 3, 2017 at 9:37)
This might be a early call but I believe that this the Video of the month already. Props to Mike and everyone else who help create this masterpiece

BrotherCraig75 (Feb 3, 2017 at 11:54)
Very relatable to what riding is to me. As a dad, husband and railroader, life can seem hectic and a bit overwhelming at times. Its those peaceful, fun and quiet moments in the forrest by myself that keeps me grounded. Great video, and really fun looking trails!

satchscratch (Feb 3, 2017 at 17:37)
@mike-gamble @AJBarlas Killer work both of you... AJ I'm really digging those angles and the textures of those shots, and Mike that was magical stuff. I felt like the film was putting me to sleep--but I mean that in the best of ways; it was so atmospheric and pleasant that I felt like I was in a wonderful dream. Cheers to you both.

terrybagger (Feb 3, 2017 at 7:37)
Upper Mackenzie Cruise / Cop Killer shown in fine form. Kudos to Dan Raymond, all the diggers and the PVTA/PORCA.

SilverCreek (Feb 3, 2017 at 9:39)
Just watched 3 times in a row. This is cinematic art. Obviously tapping into something here... Beautiful

painless (Feb 3, 2017 at 9:18)
1st video I've seen in quite some time that works on a 21:9 monitor; looked gorgeous. Everything about this video is near perfect, audio, track, riding, filming. Kudos.

twelve02 (Feb 3, 2017 at 12:13)
What a beautiful video... I felt the cold while watching. The only thing it needed was a few really wide or long shots to make Forrest seem really small in an immense environment.

mike-gamble (Feb 5, 2017 at 8:53)
@twelve02 it was so wet during filming that I rarely changed lenses due to rain getting inside the camera. When I did use it, it got soaked, so...yeah. I did want to give that impression though...next time.

twelve02 (Feb 5, 2017 at 10:01)
@mike-gamble: Mike, what you guys did was truly inspiring... I can comment all day long about shots, lenses or whatever, but you guys are the ones doing it and doing it amazingly well. Thank you for taking the time to shoot, edit and score this amazing piece. I've watched 10 times already. I say easily video of the month.

ebwitwicki (Feb 7, 2017 at 10:54)
Another thankless edit to the builders and associations that maintain and build these trails for your wonderful edits! Nice work PVTA and PORCA on keeping these old gems in mint condition. Hope the filmers and rider bought a membership to support the local trails that they get to film on for free!

mike-gamble (Feb 7, 2017 at 20:11)
@ebwitwicki, I agree and apologies for any oversight to this. I have memberships for PORCA & WORCA through 2016 & will be renewing them all again this year...along with multiple days of digging to cleanse my soul. All credit goes to the builders of the trails we showcase, their trails are beautiful enough.

pingntodd (Feb 5, 2017 at 9:16)
the video was a breath of fresh air........very well done. Forrest is a great guy who I remember from years ago travelling to races with his folks, they are real down to earth people to. Well done Forrest and hope to see you at some World Cups this year!

tankthegladiator (Feb 3, 2017 at 11:07)
I love creative filming But the Slow-Mo shots of rear wheels flexing and jiggling while sliding sideways over rocks makes me cringe.

noheavennohell (Feb 3, 2017 at 20:34)
Best edit I have seen on here in forever. Reminds me a lot of the scenes from Life Cycles, which is IMO the best MTB film ever made.

kabelleira (Feb 3, 2017 at 10:34)
Perfetcly captured winter mood. Kudos. Good to watch while raining cats and dogs outside and wind blows as hell.

metaam (Feb 3, 2017 at 12:38)
I often find slow mo shots a bit aggravating but I thought they really worked well with the music and the overall feel of this edit, great work.

jazzdhiman (Feb 3, 2017 at 12:49)
That was a great edit, very artistic and the video kept your attention. That's not easy to do in the internet age where everything appears generic. Great JOB Mike Gamble!

DHsender4life (Feb 3, 2017 at 15:53)
one of the best trails ever . why does nobody ever state the trail name in videos? so lame keeping it secret . trail is called cop killer , in pemberton. go ride it people!

DHsender4life (Feb 3, 2017 at 16:12)
@mike-gamble:i see. i built a trail in rutherford valley called diesel wolf. its near shasta is you know that trail. steep rock moss lines the entire way . feel free to film on it come spring . its a trail like no other.

Wharfrat27 (Feb 4, 2017 at 17:52)
i dug the interplay of the music and bike/trail and thought there were some great cinematography . loved the primitive trail too

worldsafckngtrail (Feb 6, 2017 at 5:43)
awesome scenery ! i miss these kind of trails in germany..everthing's destructed and cut out. so hard to find untouched nature these days..

thwillis (Feb 8, 2017 at 1:06)
sweet video. the music was great, the edit bang on and the whole feel of the video was fantastic. and no slow mo in sight. great job.

sutter2k (Feb 3, 2017 at 6:47)
Great video! Sometimes its nice having the place to yourself(+dog). Reminds me of a morning ride on my last vacation.

mecabeat (Feb 3, 2017 at 10:30)
If it was filmed in 21:9, then you're actually seeing more, and it's just because your monitor isn't wide enough. If it wasn't, then I agree with you, but this does appear to shot with an anamorphic lens.

won-sean-animal-chin (Feb 3, 2017 at 11:04)
Soo smooth through everything and filming to match. Every clip was perfection

straightshreddersOC (Feb 5, 2017 at 12:47)
only flaw is that the photos look way better, much more crisp Sick edit

JMBMTB (Feb 3, 2017 at 12:46)
@DigRenno: letterboxing is a bit overrated, yes it looks good but a video doesn't need it and this video looks great without it so theres no need for it