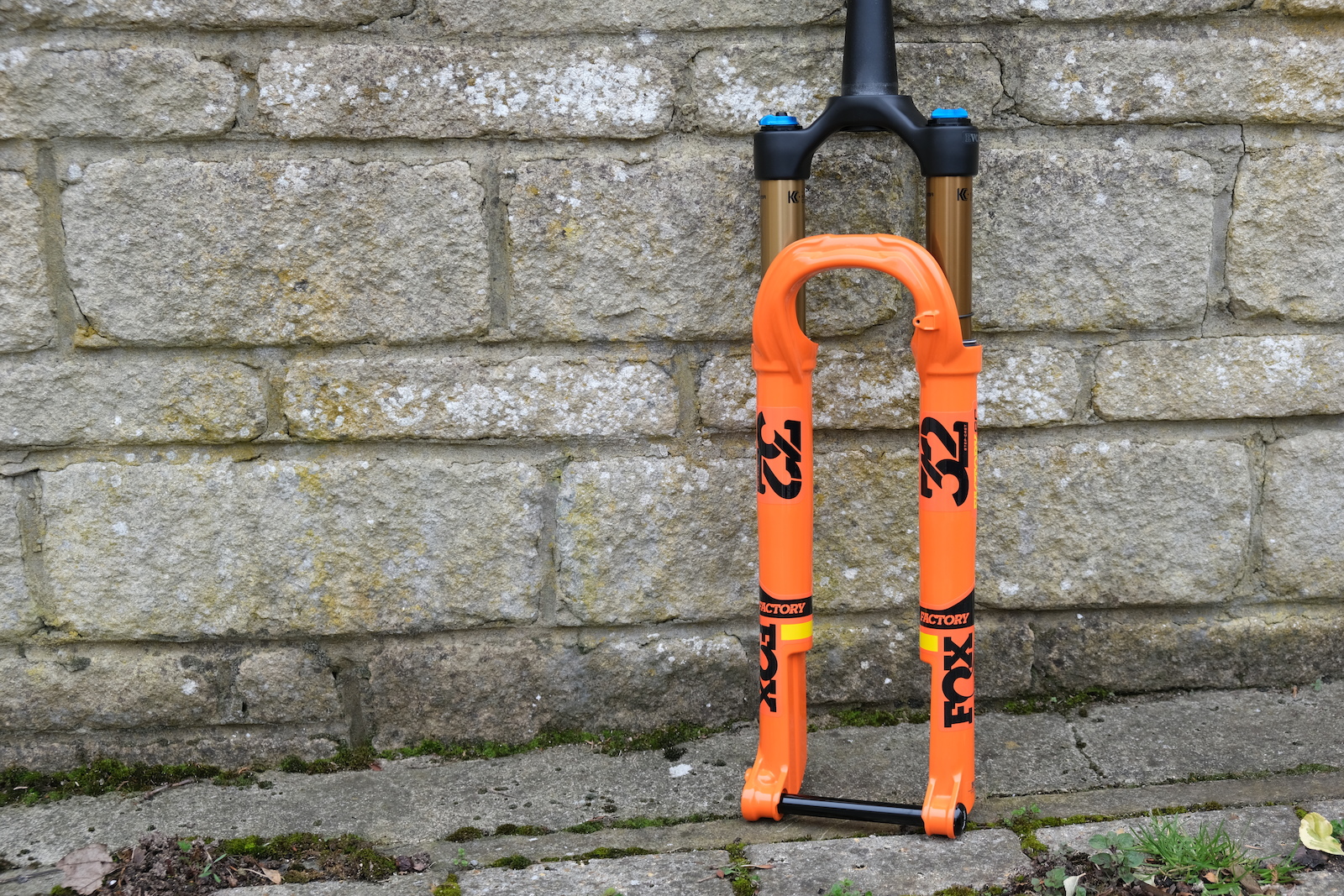 FIRST LOOK
2020 Fox 32 Step-Cast
WORDS: David Arthur
The 32 Step-Cast was introduced in 2016 and ushered in an all-new chassis that brought the weight down to a feathery 1,355g (2.98lb), along with the introduction of the FIT4 damper aimed at XC racers craving the lightest and best performance.

For 2020 Fox has focused on improving the stiffness of the fork. Thanks to a redesigned crown, the stiffness has increased a claimed 20%, which puts it on a level with the beefier 34 Step-Cast fork despite a mere 30g weight increase over the previous fork. Fox says the only feedback with the current 32 Step-Cast was that it could be a bit stiffer, so that's an area they focused on. The change should provide better steering precision and braking control for those times when you’re on the ragged limit.
Fox 32 Step-Cast Details
• Intended use: cross-country / marathon
• Wheel size: 27.5'' or 29''
• Travel: 100mm only
• Stiffer Step-Cast chassis
• FIT4 damper and three-position adjustment
• Boost or standard 15mm thru-axle
• Two-position handlebar adjustment
• Offset: 44mm or 51mm
• Weight: 29" - 1,443g (3.18lb) actual weight (Boost Kabolt axle, uncut steerer)
• Price: $909 USD
• www.ridefox.com
That crown has been redesigned, though it's hard to spot the differences alongside the current 32 fork. That new crown aside, not much else is different. Internally it’s the same as current model 32 forks with 100mm of travel via a Float air spring and FIT4 damper. There’s three-position adjustment - Open, Medium and Firm - and an optional two-position remote handlebar lever on the top-end models. You also have the choice of 44 or 51mm offset, but according to Fox nearly all their XC athletes are on the 44mm offset this year, and that's what we have to test here. 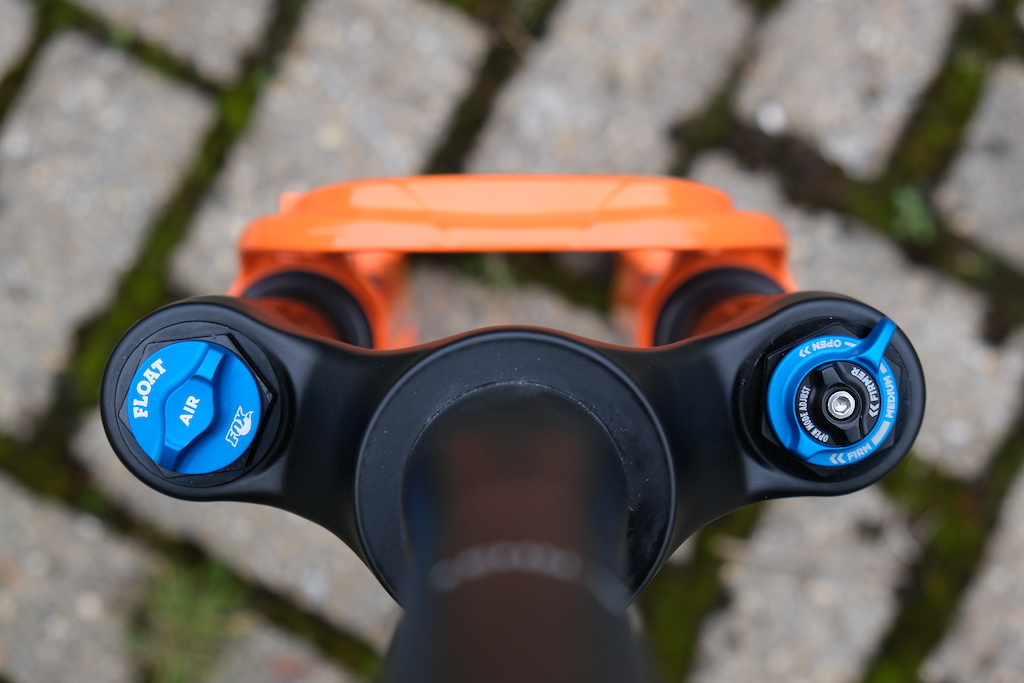 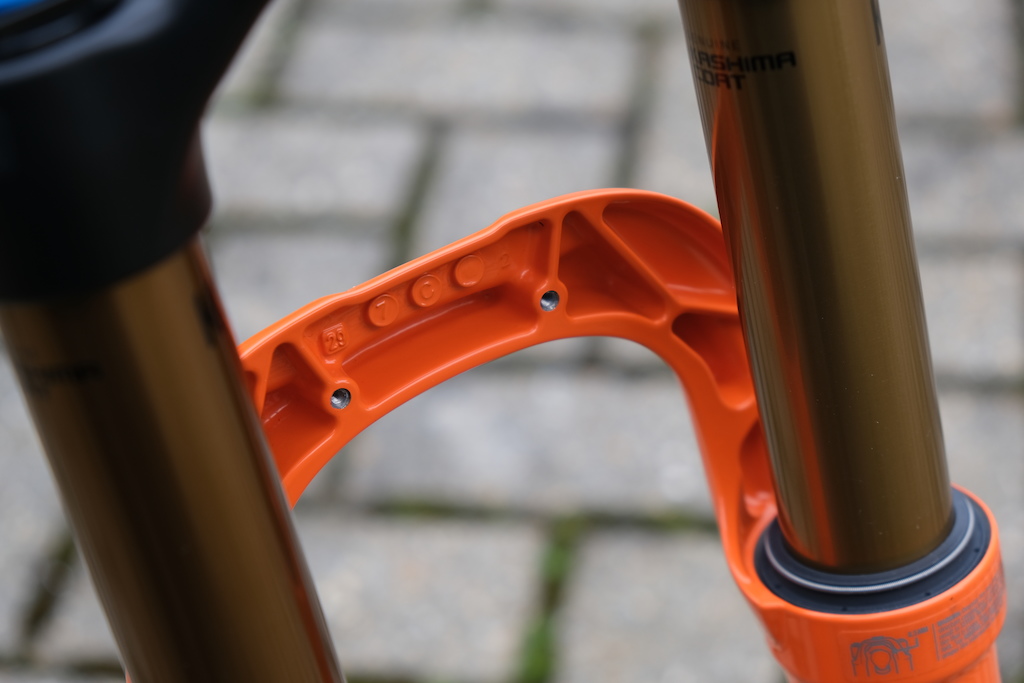 There are still weight saving measures. 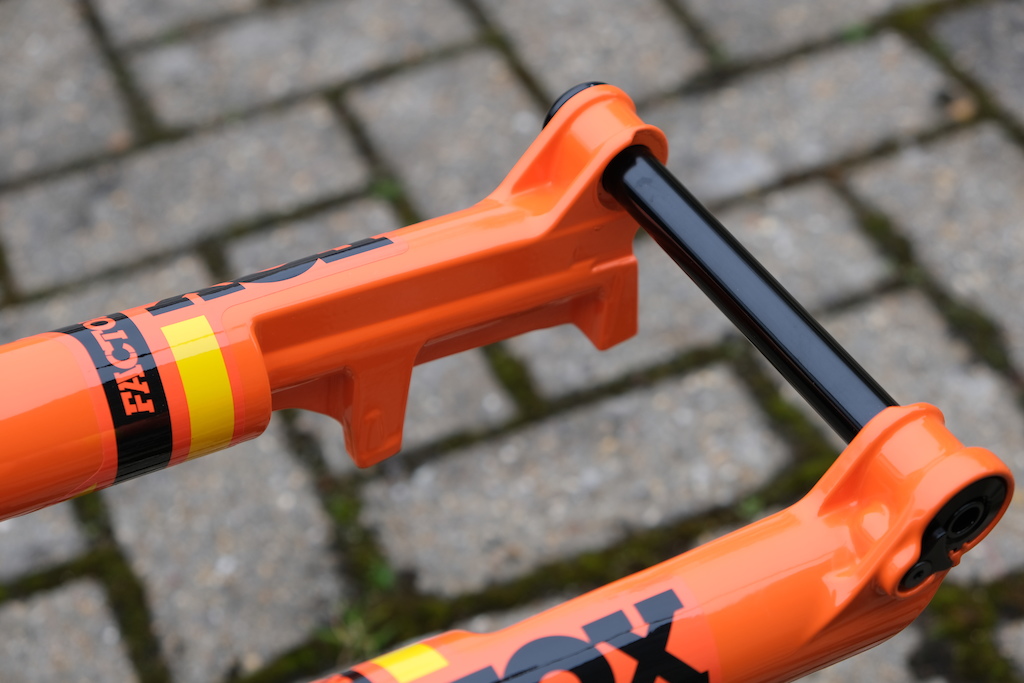 This is what gives the 32 Step-Cast forks their name. 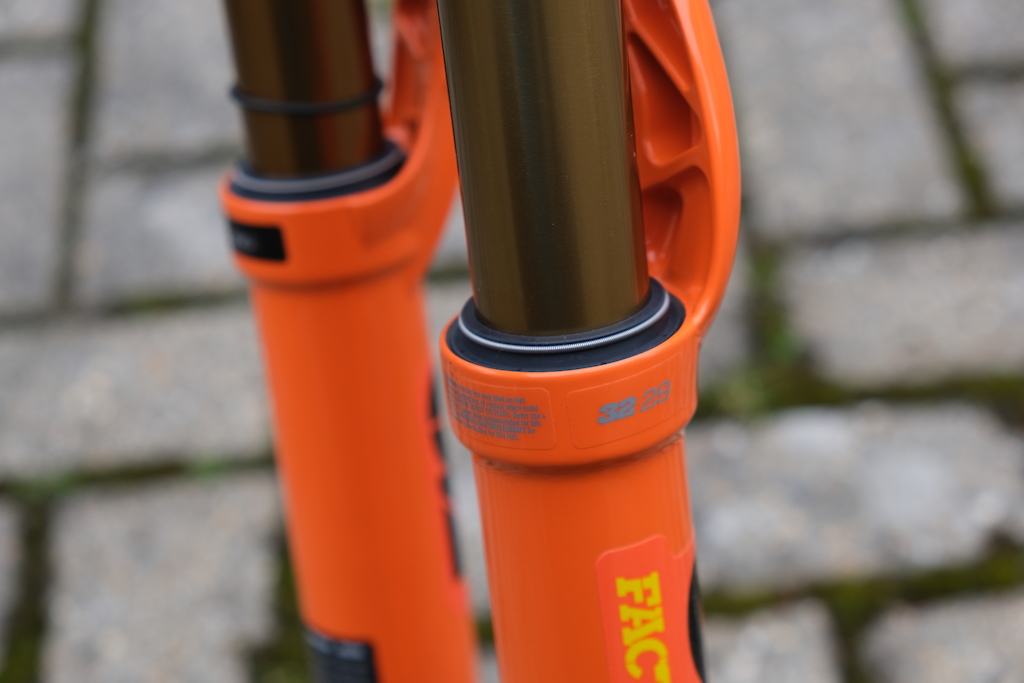 There are 27.5" or 29" options.
There’s the same choice of 29” and 27.5” wheelsizes with either 110 or 100mm axles, and Factory Series and Performance Series to suit different budgets. Factory gets Kashima coated stanchions with a lightweight Kabolt thru-axle, 2-position remote handlebar lever and an optional gloss orange color alongside the regular matte black. The cheaper Performance Series fork only comes in matte black with hard anodised black upper legs, regular thru-axle and no optional remote handlebar lever.

Those changes aside, all other key features carry over. There’s the same stepped lower that was the big redesign on the current 32 fork: the lower legs transition from normal round tubes at the top to narrow shapes at the dropouts with an actual “step” to clear the front wheel spokes and disc brake rotor. It was a big gain in lowering the weight whilst maintaining desired stiffness levels, and it eventually made it onto the bigger 34 fork too. 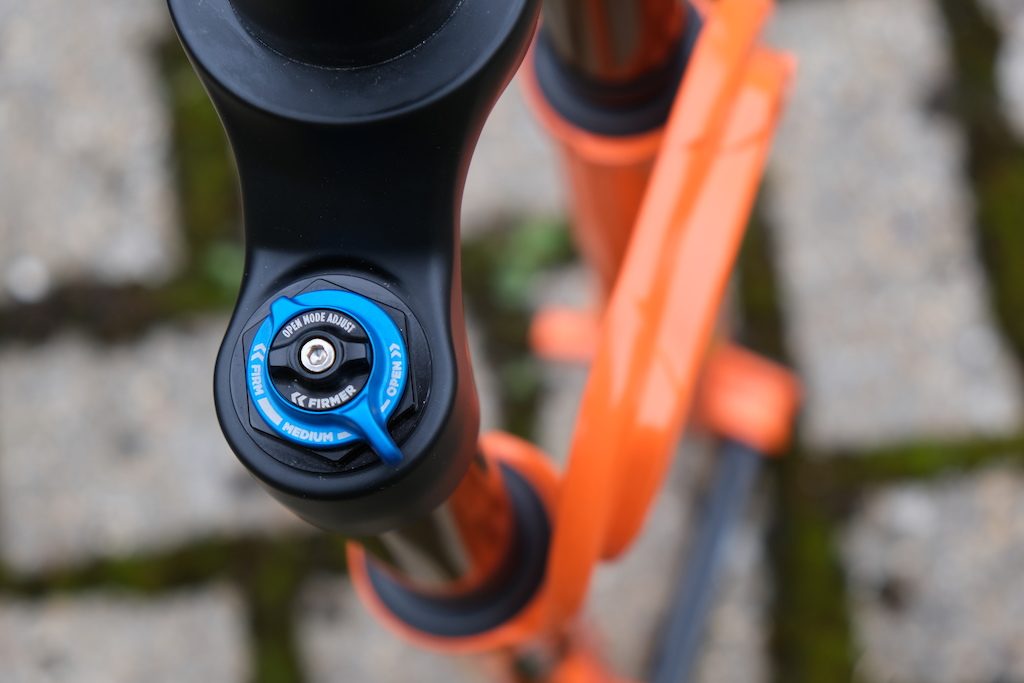 Three-position FIT4 damper adjustment
I’ve been riding the current 32 Step-Cast for the past couple of months and the low weight, stiffness and damping performance have been really impressive on my trails. It’s not waywardly flexy when diving down steep tracks or pummelling into roots, so it’ll be interesting to see how the new fork compares. Damping is well controlled, with a supple and supportive manner that keeps the wheel glued to the ground for maximum traction and resisting brake dive.

I’ve only just received the new fork for review, so I’ll get it fitted to a bike ASAP and start putting in the miles to see how it compares to the current version. Has one of the best XC race forks just got even better? I can't wait to find out soon. 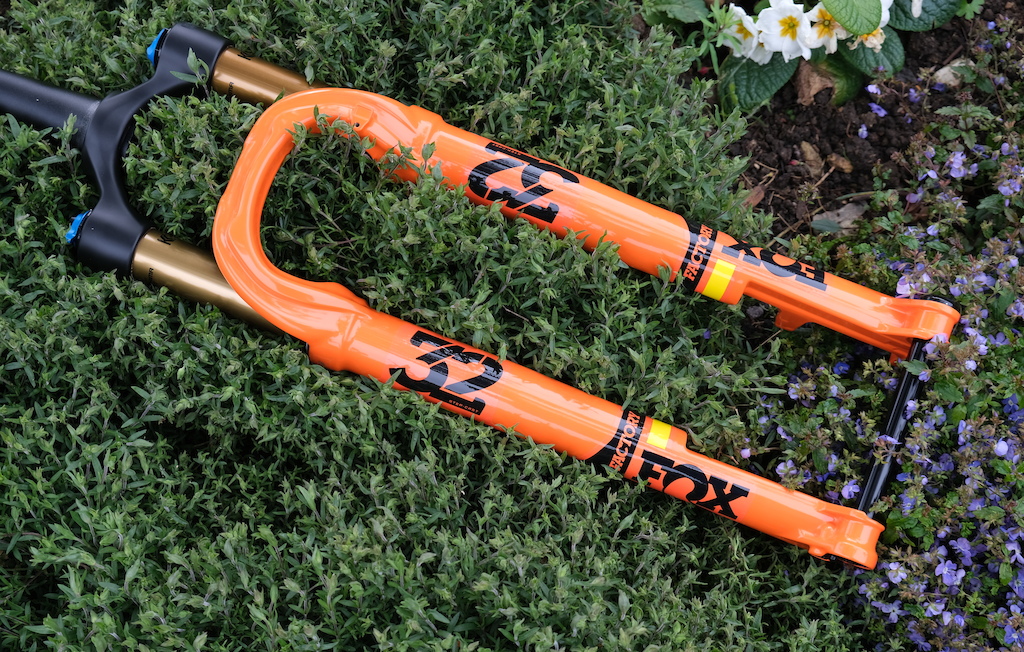 seismicninja (Apr 10, 2019 at 0:48)
Fox is taking a Step in the right direction. Instead of tossing a random Cast into the "totally new" fork pond, they are intending to Float their proverbial bobber into consistently profitable waters to Boost sales and Offset production costs by 44 to 51 percent. Enough to FIT 4 more fish in the Open Medium size Firm fish basket.

IamTheDogEzra (Apr 10, 2019 at 1:29)
I do not think that fox's fish as that was a famous quote in Apocalypse Bow, Wow - Owner's Cold Cut (that I stole off the counter). The famous quote goes "It is pretty hairy in there, that is Fox's point." The man with the dog whistle then says "get off the beach and stop pooping in the water don't you know that contributes to fecal coliform in the inter-tidal zone and ultimately the fresh water table?" A timeless classic.

Balgaroth (Apr 10, 2019 at 5:37)
It's getting quite frankly ridiculous yes. How can you want to buy new products when what you can buy right now is already officially obsolete ? Start releasing 2020 products at the end of the summer when people are leaning toward end of season and may already start planing the next one, but right now ? the marketing deps in the big Corporates must have too much white powder and hype I think to forget the basics of communication and just go all out whenever.

ninjatarian (Apr 10, 2019 at 10:33)
@z-man: Sorta- most manufacturers have had historys of creaky CSUs which indicates an inherent design flaw with two piece CSUs. That said, it’s easily fixed by odopting a one piece CSU like Ohlins did. Thats a more expensive design though, and that extra cost would eat into the bottom line. So basically the creaky CSU is a problem, but not a big enough problem to reduce profits, which lands the ball back in Fox & RS court.

thenotoriousmic (Apr 10, 2019 at 10:40)
As does @rockshox I really don’t mind going back to pinch bolts it stop this. I’m sick of being off the bike because of this when there’s nothing wrong with the fork other than that.

Ohlins CSU was still 2 pieces. The steer was all one piece with the crown for the first run. Now they're like everyone else and use a 3 piece design.

And secondly the creek comes from the stanchions crown interface. In which Ohlins has always had a bonded design.

You clearly don't know what you're talking about.

dominic54 (Apr 10, 2019 at 1:53)
Just a terminology conundrum - which bit have they redesigned? The fork crown, or the arch? The crown is usually the bit at the top connecting the stanchions to the steerer, no? Whereas the photos in the article are of the arch. Pedantic perhaps but it's a bit confusing.

between (Apr 10, 2019 at 3:17)
There are visual differences between the old crown and the new one. The new one is more smooth/full. They need to clean up the article.

kclw (Apr 10, 2019 at 8:39)
It isn't written in the article but my understanding for conversations with Fox it is the same fore and aft stiffness. Torsionally the SC 34 is stiffer.

jonodavis (Apr 11, 2019 at 8:48)
@WhatAboutBob: I wish they would specify fore/aft vs lateral vs torsional. Just saying "20% stiffer" without context smacks of marketing BS.

I'm guessing by the pics that the remote handlebar lever is an option...

z-man (Apr 10, 2019 at 8:38)
Yeah, not worded the best. But it always has been in the past. It's actually a different top half of the damper cartridge as well. So it's not easily converted either.

yetiyot (Apr 10, 2019 at 8:38)
Maybe it's just me, but after 5 years on a Rockshox SID Brain, I found that the 19' Fox SC is much smoother and compliant than the RS. I prefer to have it a bit softer than freaking rigid that kills your hands. Riding with the Fox for a couple of months now, not feeling any lack of stiffness.

mhoshal (Apr 10, 2019 at 9:21)
Why didn't you get that feedback before the first ones were ever made into a production model is my question? Its hard to believe you had prototypes that were basically limp noodles and you didn't notice 2+ years ago when testing.

jonodavis (Apr 11, 2019 at 8:47)
My guess is they had a weight target and were optimistic about their customer's expectations for the stiffness of a lightweight fork.

clink83 (Apr 11, 2019 at 9:34)
Look at the XC courses that their sponsored riders are using them on..i think they are stiff enough for us punters unless you are Clyde.

wibblywobbly (Apr 10, 2019 at 6:01)
Forget this, hurry up and break the embargo on the minute changes coming for 2020 that render my current 36 obsolete. Also, I want to see the new decals so I can order them and fake I have the new one

miles-e (Apr 10, 2019 at 7:47)
Glad to see them address this. Fox crowns, particularly on 32 series forks, are rather anemic compared to an equivalent Rock Shox- and apparently it wasn't just in my head that this translated to reduced stiffness! Went with a SID over a 32 SC on my hardtail for this reason, but would now consider the Fox next time I'm in the market.

palirojo (Apr 10, 2019 at 11:21)
Is it just me or is the kashima color darker on one stanchion that the other? I know it wont do anything for performance but it would drive me crazy, ha.

shedsidechuck (Apr 10, 2019 at 12:19)
redesign a fork crown to increase stiffness...yet still retain weight saving designs on that fork.
I dont design mtb forks, but I think this approach could work with forks specd with larger ( 39mm+) stanchions

Bflutz625 (Apr 10, 2019 at 6:51)
Especially when the Ocho Carbon now weighs less than this and the Lefty's are known for their stiffness

FrEeZa (Apr 10, 2019 at 8:35)
Something something BOOOSSST, something 15mm KABLAWEE axle, STEP something CAST, MOAR arch is stiff. My stiff arch is stiff. ORANGE KASHIMA! Get it now for 2020! This is the fork that kids like.

inked-up-metalhead (Apr 10, 2019 at 0:59)
Its easy to test for stiffness. Hold the fork securely horizontally, the apply a force in one of two ways. Straight down from the axle for fore and aft stiffness, or hanging off one side for torsional stiffness. For the same load this fork will twist/flex 20% less than the old one.

RecklessJack (Apr 10, 2019 at 1:47)
@inked-up-metalhead: Or you twist the fork the same amount and measure the force required to do so. If a fork requires 20% more force for the same amount of deflection there you have it.

headshot (Apr 10, 2019 at 1:59) (Below Threshold)
It screams BS to me. If it were true, the original must have basically bent itself double going around a corner...

inked-up-metalhead (Apr 10, 2019 at 2:59)
@headshot: that's the most rediculous thing I've ever read. If with a set force the old one twisted 5mm this one would only flex 4mm. That's a 20% improvement. It's the problem with percentages as statistics, you ideally need a reference point.

dinsum (Apr 10, 2019 at 5:04)
@inked-up-metalhead: This is so true! I got rid of my 32 step cast because its just downright dangerous for my 190lb ass, it flexed so much it decided what line to take in any somewhat gnarly section.... a soft noddle that is 20% stiffer is still a soft noodle but i'm sure this is good for those 150lb riders, I upgraded to the 34 step cast and can confirm for the extra 200 grams its a must!

mgolder (Apr 10, 2019 at 11:34)
Your comment still being in a positive props says a worrying amount about just how much the people on here really know.

ninjatarian (Apr 10, 2019 at 1:06)
Uh, sounds like you need to spend some time outside of this bubble called Pinkbike.