Join Pinkbike  Login
Fox's 34 series is their jack of (nearly) all trades chassis, with it seeing action on everything from cross-country race bikes to light duty all-mountain machines. That sort of versatility is great, but the 2019 model year sees Fox add a lighter, more focused version to their catalog: the 34 Step-Cast.

The main talking points include the all-new Step-Cast chassis that, much like the even lighter 32, sees less material used but, according to Fox, a gain in rigidity. While the 32 Step-Cast chassis is narrower than the standard 32, so much so that its Step-Cast lowers needed to be re-engineered to clear the front wheel's spokes and brake rotor, the 34 Step-Cast chassis is less out there.

The width is the same as the normal 34, so Fox didn't need the extra clearance at the inside of the lowers, but they did pare down the outside of the lowers where they meet the 15mm thru-axle dropouts. 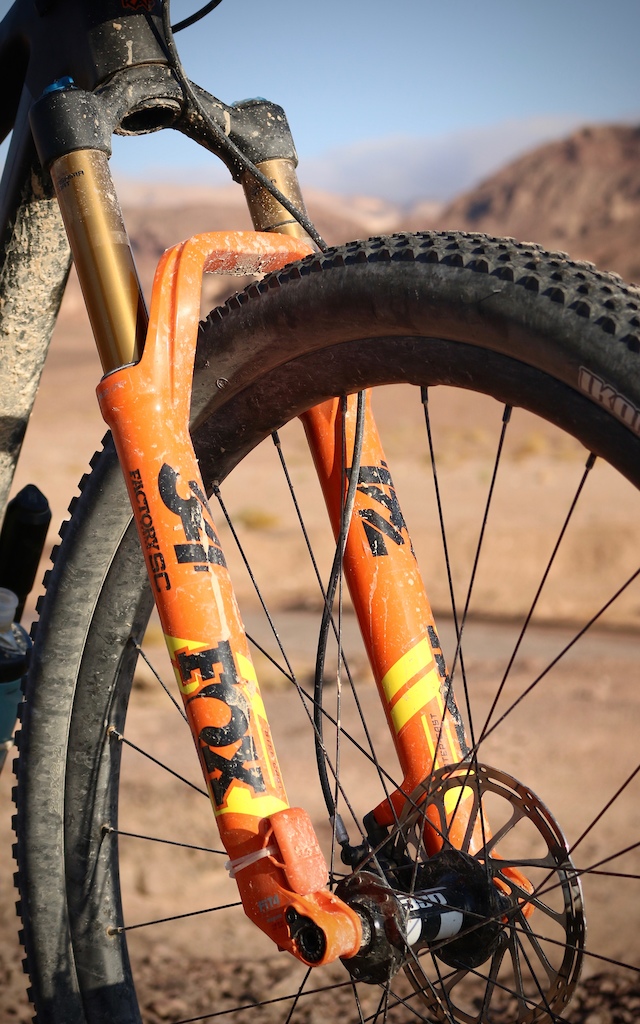 Fox says that a 27.5'' 34 Step-Cast with a Kabolt axle comes in a 3.5lb, a number that's half a pound less than a standard 34 with 140mm of travel. More compelling is that Fox claims that it's also a third of a pound lighter than a 120mm-travel 32 while also being 15-percent stiffer.

So many numbers, including this one: 120mm, which is the only travel setting that you can get a 32 Step-Cast in due to the stanchions and lowers being optimized for that stroke.

The 34 Step-Cast comes in three flavours but, interestingly, not one of them uses the new, four-way adjustable GRIP2 damper. Instead, the two Factory options both employ the FIT4 system, with one coming with a remote ($1,024 USD) and the other without ($943 USD). The least expensive of the three is the Performance model that features Fox's less adjustable, and therefore less expensive, original GRIP damper for $789 USD. 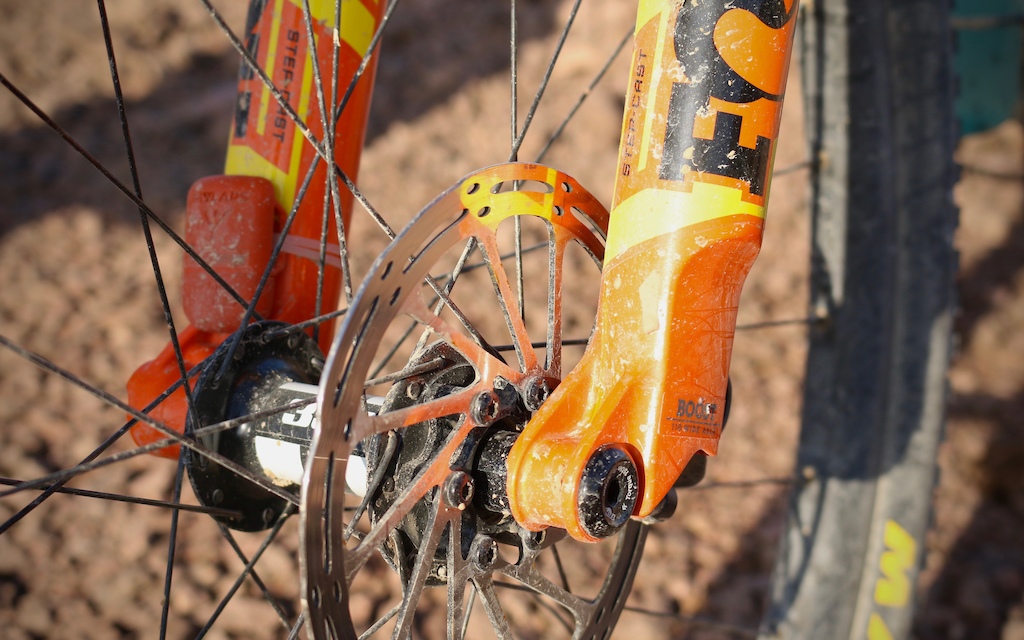 See how the lowers taper down near the thru-axle? That's how you spot a Step-Cast 34.


The fork's EVOL air spring also gets tweaked, with fewer dynamic seals for less friction, and a slightly more linear rate through the first quarter of the fork's travel for better sensitivity. Fox has also employed their FIT4 damper that offers 22-clicks of low-speed compression adjustment (in the Open setting), and a three-mode compression dial for on-the-fly adjustments. There's also a new, lower friction seal head and an update to the damper tune.

Think of the Step-Cast chassis is an all-new home for internal updates that Fox has made for 2019, and the whole thing is a lighter weight, 120mm-travel package. 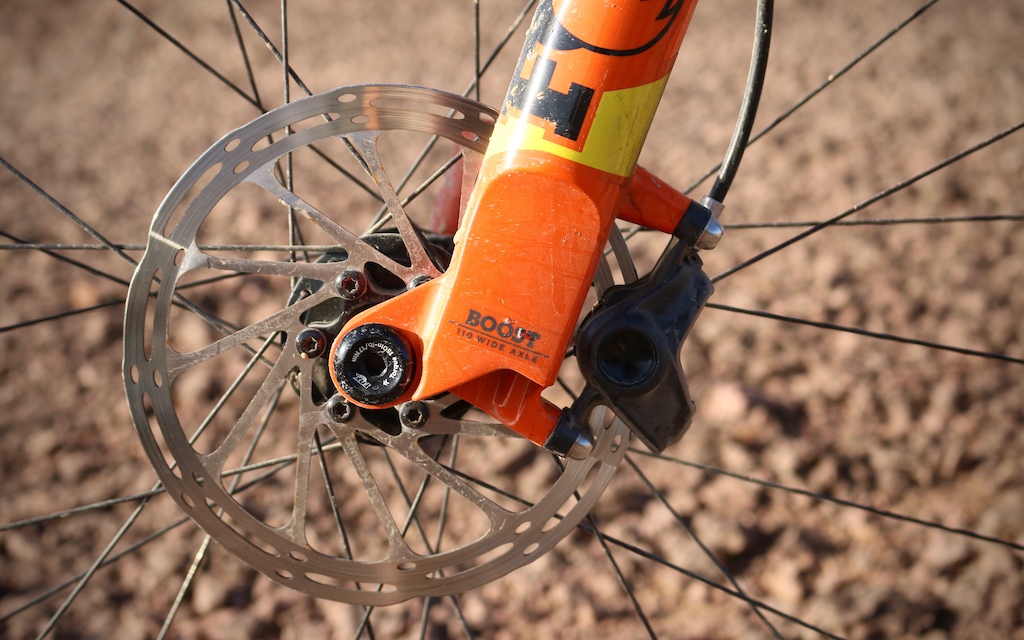 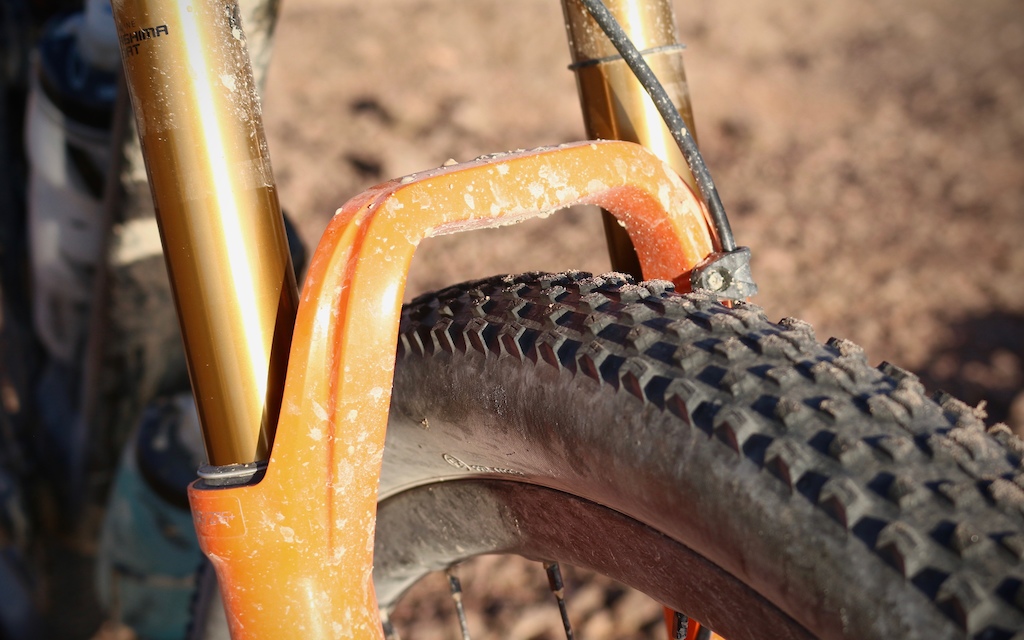 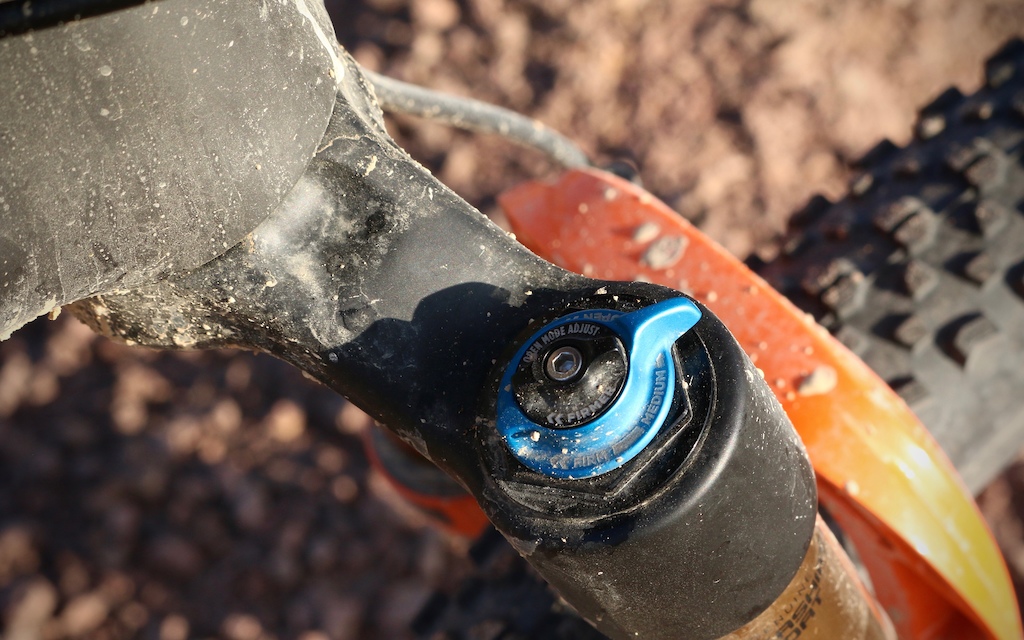 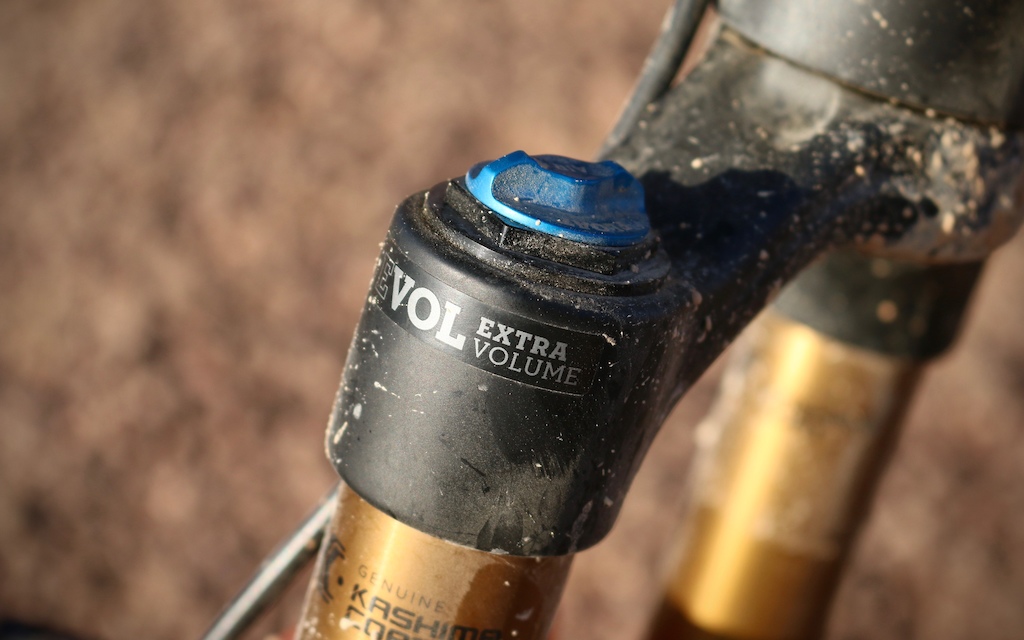 If the damper dials and air spring cap look familiar, it's because Fox has dropped in updated versions of their proven FIT4 damper and Float EVOL air spring.

I've spent time on a bunch of 34s over the years, from the top of the range Factory forks to the less expensive GRIP offerings, and being the kind of guy who likes relatively light bikes with medium amounts of travel, it's a fork that I've always gelled with. Those 34s have impressed me, and it's no surprise to me that the new 34 Step-Cast does the same.

I've had the 34 Step-Cast on the front of Santa Cruz's new Blur for awhile now, and it's seen everything from grueling cross-country stage racing to the rowdy rock slabs of Squamish. After all that, I'd say that it feels pretty much identical to me as Fox's previous top-tier 34 offering, which isn't exactly a bad thing. 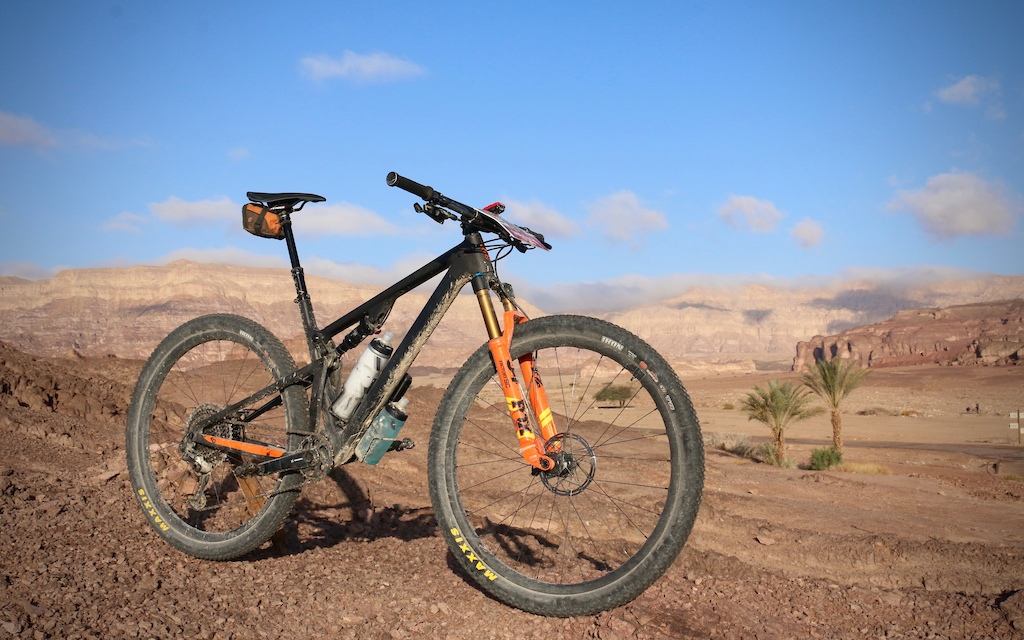 
To my 160lb body, it didn't come across as less or more torsionally rigid than other 34s I've used, but it does make a 32 feel a bit spindly... no surprise there, of course. As for the updated damper and Float air spring, the same applies; I wouldn't try to convince anyone that I noted a difference, but I also have exactly zero things to complain about.

The Step-Cast being fixed at 120mm means that it's going to have a smaller audience than an adjustable or longer travel fork of similar intention, but those riders who don't need more stroke will have the option of a lighter weight package, should they want it.

But the again, RS just released a 120mm SID

TheOriginalTwoTone (Apr 10, 2018 at 9:19) (Below Threshold)
Which is limited to a 160mm front rotor. Hope this Fox doesn't have the same limitation.

I think 34 is a step in the right direction for 29ers.

dldewar Plus (Apr 10, 2018 at 9:33)
Mike thanks. It means until I loose another 20 lbs I will not run out to get the step cast fork. Hopefully Santa Cruz will add this option without any lockout lever to their hopefully upcoming Marathon build Blur 3. As a 190 lb guy with some upper body power - let me tell you a 120 mm 34 compared to a 120 mm 32 is like comparing a steel beam to a limp noodle.

High-Life (Apr 10, 2018 at 10:29)
Looks like the perfect fork for KOM hunting on local trails. You can keep the bike light, but add some capability to an XC rig.

silentbutdeadly (Apr 11, 2018 at 2:14)
Bewdy! I get to hang on to my HT and dually XC bikes even after shifting somewhere with more elevation and rocky terrain without having to deal with noodleness that this terrain (coupled with my weight, age and lack of technique) inspires in both my Fox 32 and RS SID WC 32 forks....

Mpgiant1 (Oct 20, 2018 at 15:51)
To the author - can you fill me in on how you set up the new blues lockout when you replaced the fork. It looks like there is no more lockout on the rear shock there either. I’m on the new blur and not opposed to getting rid of the lockout ... but I am planning to move to this fork. Can you fill me in on your build there?

(I find it really hard to believe that those are accurate stats...)

Apparently my waist has shrunk to 28" from 29" since I measured it last when i was 3kg lighter. Weird.

TIL that you can only get the 32 step cast in 120mm. I guess all the XC race bike specs are wrong.

CaptainSnappy (Apr 12, 2018 at 10:31)
Canadian Personal Safety Passport (CPSP). Basically a personal locating device. We are obliged to use them when we leave Canada. If we get into danger (life and death stuff) the federal gov't can easily find us anywhere in the world.

FrEeZa (Apr 11, 2018 at 10:29)
After quitting MTB because of all these new gimmicks and standards, it is such a joy to read through the new PB articles.

Rigidjunkie (Apr 10, 2018 at 8:49)
160 pound person talking about torsional rigidity? Come on man go eat something that ate a salad for you.

Data are for the U.S. Measured average height, weight, and waist circumference for adults aged 20 and over

Derived from converting published figures listed in centimeters to inches.

CaptainSnappy (Apr 10, 2018 at 9:25)
@Rigidjunkie EXACTLY! If you're not a 200 lb lard-ass with a Big Gulp taped to your hand, lugging pubescent man-tits around, you are NOT ALLOWED to discuss torsional rigidity! EVERYONE KNOWS THIS!!!

beanandcheeseburrito (Apr 10, 2018 at 12:02)
@CaptainSnappy: whoa. This is alarming. Nearly 196lbs and a 40" waist for men? Yikes and really no excuse for it. Basically the CDC is saying average = morbidly obese.

SprSonik (Apr 11, 2018 at 12:31)
@mhoshal: but if we look outside the circles of active people like ourselves, Americans are not very "fit"...putting it mildly.

TucsonDon (Apr 11, 2018 at 13:50)
@SprSonik: Yes, yes, BMI doesn't apply to the 0.5% of people that are bodybuilders or avid crossfitters. Therefore we should totally throw it out since it only accurately applies to about 99.5% of the population. Hey, if you're in the 0.5%, more power to you, but look around you, visit a Wal-Mart or a McDonald's and you'll see the BMI definition of obesity is spot-on for most people.

(I find it really hard to believe that those are accurate stats...) Apparently my waist has shrunk to 28" from 29" since I measured it last when i was 3kg lighter. Weird.