Through The Lens - Fraser Britton

Join Pinkbike  Login
Fraser Britton has a pretty unique day to day job. Not only is he a freelance photographer trying to make a living off his photos, but he is also the exclusive photographer for Team Monster Energy / Specialized. I recently got a minute to talk with Fraser about what makes him click, and here's what he had to say.

Check inside for an interview with Fraser Britton...To start things off, who are you, where are you from, and what's your day to day consist of?
I'm from Montreal, born there and lived there most of my life except for a few years that I was in Colorado. I now live on the legendary North Shore of Vancouver due to the riding and work opportunities it provides, not to mention it isn't -40 all winter.

How did you become a photographer? When and what inspired you?
I went to school for Journalism and political science, and somehow ended up in Photography. I'm really not quite sure how I fell into it, but it seems to be working out well for me at this point! I do like working in the darkroom quite a bit, not that I get to do that too much anymore, seeing as I have sold off almost all of my film equipment.

Are you pleased with the DSLR era? Do you prefer Film or Digital?
Film is fun, but digital all the way. Being able to experiment and see what I am doing is a huge plus. It allows you to learn at about 100x the pace that film ever did. It does tend to make you lazy though. Not checking light, just using the screen and adjusting instead of getting it right the first time... I need to work on that.

Did you ever attend school for photography or anything along those lines?
No photo school for me, all self taught with a little help along the way from some damn fine photographers, including Mark Dawson and Gary "Flipper" Perkin. 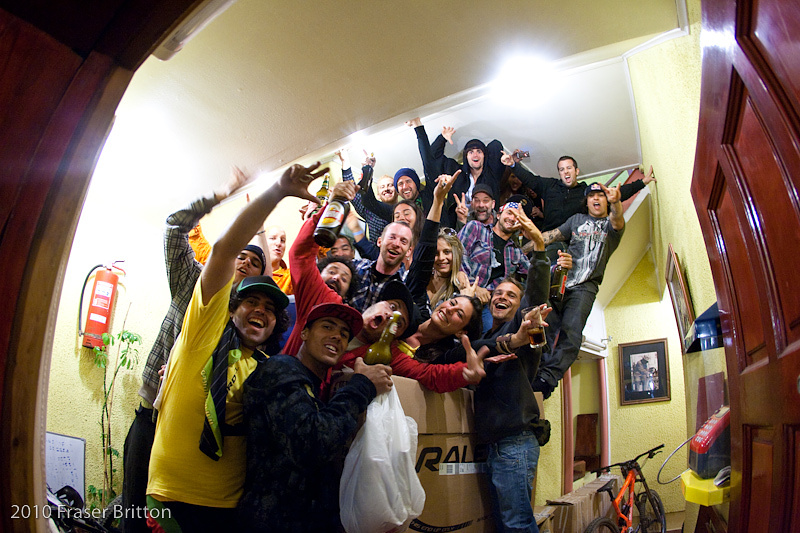 What was the first camera you've shot with?
Some beater 35mm Pentax I got from my dad. It got the job done!

What is your current gear setup?
Currently I use all Canon gear. 1dmk3 bodies, 1dmk2 bodies and way too much glass. When I need lights, I pull out my Elinchrom Rangers. 1100 watts of studio lighting, and a fully digital battery pack to run it off of. Pretty wild days with those things. They were a big investment, so I try and find an excuse to use them as much as possible.

What's your favorite shot you took and why? Favorite shot you didn't shoot?
Honestly, I have a lot of shots I really like, it's hard to pick a single one. Same goes for things I haven't shot. The old School crop of MTB photographers made some great images (Dawson, Fearon, Lanning, Doolittle). The new school guys like Flipper, Sven Martin, Coline Meagher, Hoshi Yoshida etc., have been putting out some stunning shots lately. A lot of the time I feel like I am off the back and trying to catch up. Sven in particular likes to get all crazy with monopods as a boom, climbing trees etc. I find it hard to find that motivation a lot of the time in crappy Euro race weather, but he is always on it.

Is it tough to keep track of all the magazines and online sites that are using your pics?
It's really hard, especially when MTB media is pretty sketchy, and a lot of stuff ends up stolen and used illegally. It's always fun to bill them 3x the normal rate and watch them flip out, as at that point they have no choice, but pay for unauthorized usage, or talk to my attorney. She isn't that nice about it. 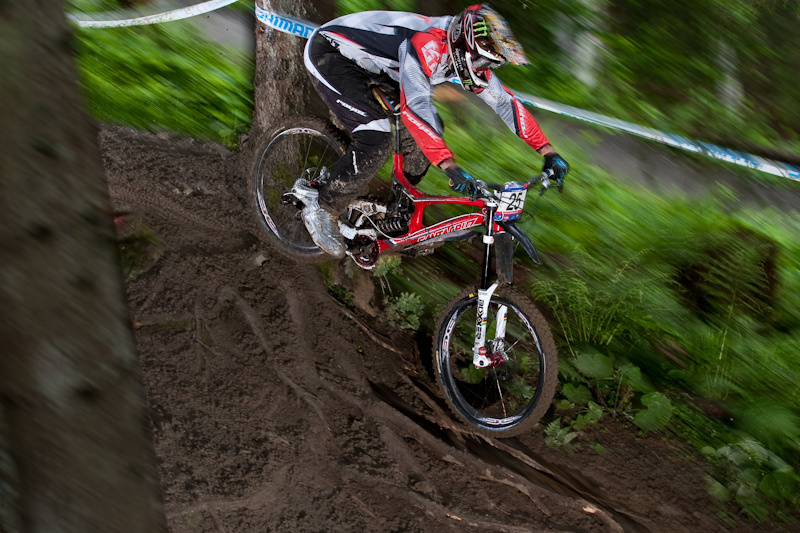 What's your schedule look like for 2010? Where can people see you?
2010 is a big year. It started in February in South America, followed by Sea Otter. I'll be at all the MTB World Cups, the World Championships (oh man, they are gonna be good this year!) , Crankworx, Interbike, Rampage and anything else that pops up in between.

How is it following around two of the biggest riders in the world with a camera?
I have to say, I am extremely lucky to have some of the contracts that I have, and being on board with team Monster Energy / Specialized is fantastic. I've been working with them for 4 years now, and it's been a fantastic ride. I owe Sean Heimdal (team manager) a huge debt of gratitude for believing in me. 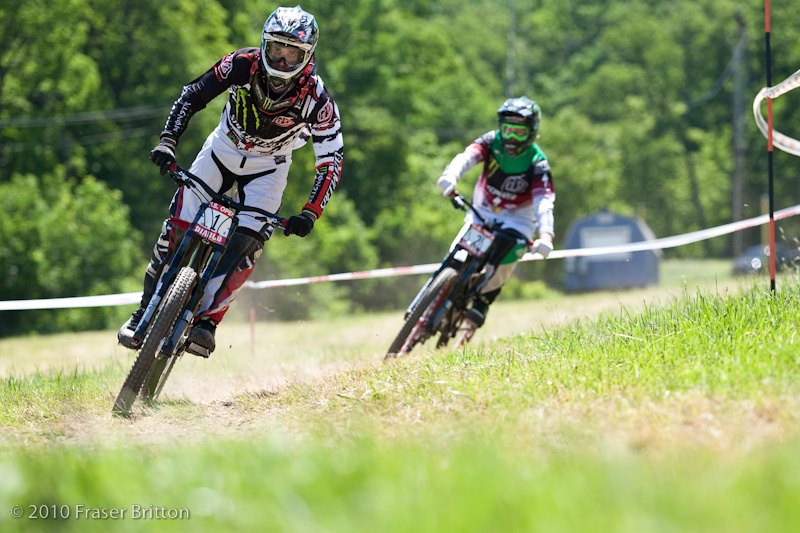 Do you or have you seen a side of Brendan or Sam you wish you didn't?
Nope. IN fact, the more you get to know those 2, Sam in particular, the funnier every race becomes. He is a non stop comedian, he just tends to keep it to himself around people he doesn't know. 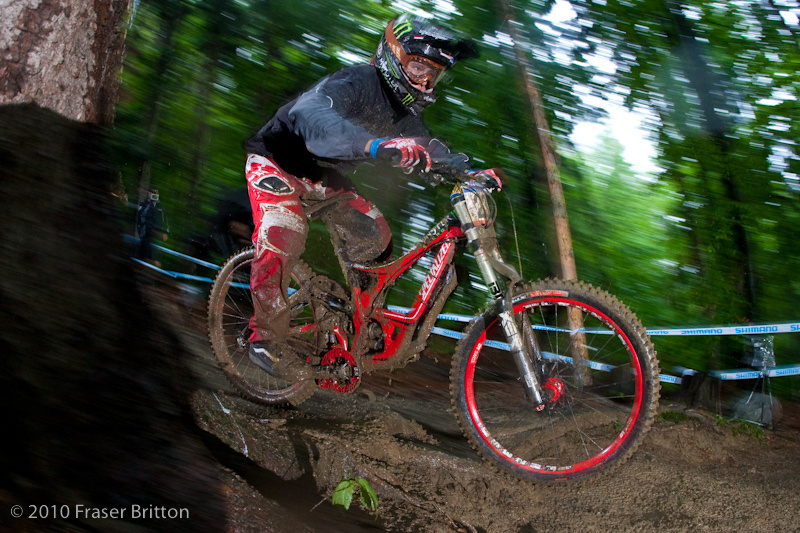 Euro Weather at its best
Do any of your shots strike you as requiring a lot of work post-processing?
I try to get it right in the camera. I stay as far away from post-processing as I can, it takes ages and I usually don't have the time.

What feel do you try to portray with your images?
The race. The atmosphere. The Drama. Euro World Cups in particular have tens of thousands of fans on course, terrible weather, big courses. If you haven't been to one, you need to. That's what I try and convey.

PC or Mac? Why?
Mac. It really does, "just work". I don't have time to be putzing around with computers at this point. 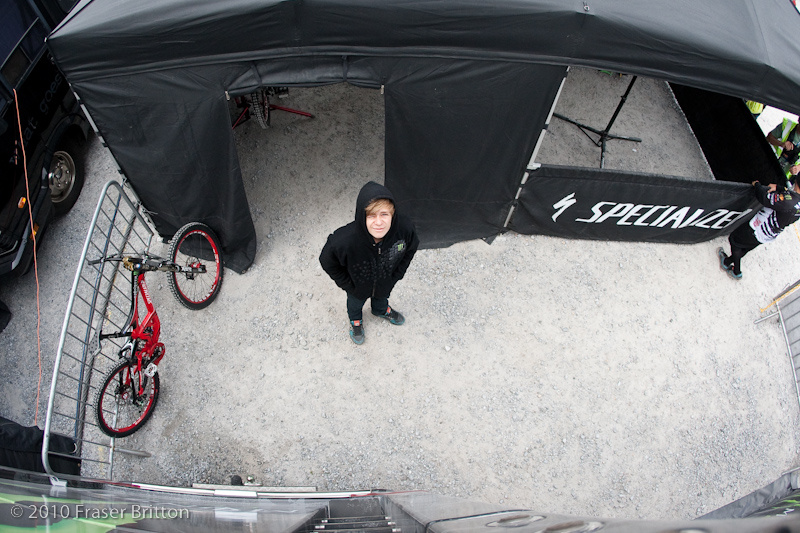 On top of the world
Do you feel your height has ever restricted or made one of your shots better?
Well, it certainly means I don't have to lie on the ground as much as others. It helps me get a different shot a lot of the time however, which is cool. I do have to carry a small ladder sometimes though!

You're been at every world cup for the last few years, how has it evolved and where do you see it going?
Racing has become much more serious, even in the last few years. Rider salaries have started to go up again, bike development has gone the data acquisition route, and the big boys are back. Trek, Specialized, GT - the major players have all decided that racing is an important evolutionary step, and tool, to help develop state of the art DH frames. Specialized used the Monster Energy / Specialized team to develop a pure bred race bike. Low BB, slack head angle and full racer style. This is a huge step for one of the biggest bike companies on earth, the new Demo that Sam and Brendan are on is NOT a normal every day production bike from Specialized, it's a pure bred race machine. 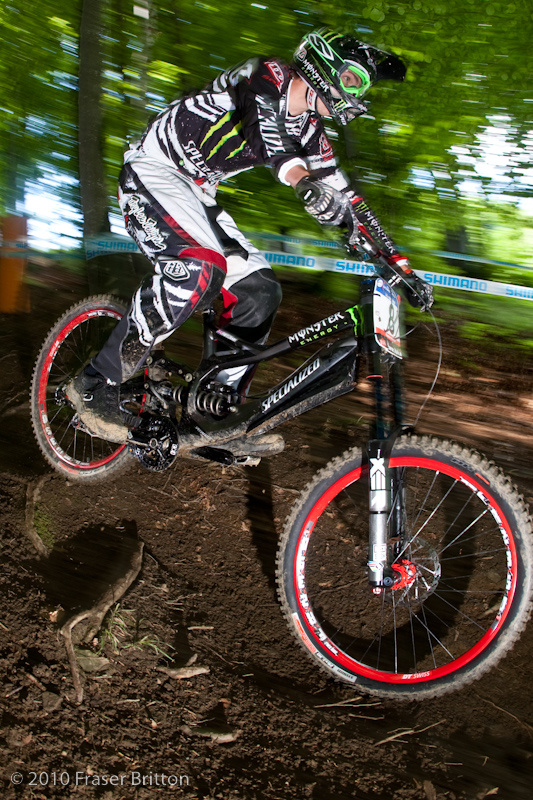 Brendan on the race bike
Who do you think will take the World Cup overall this year?
We are halfway through a season that people thought Sam Hill was going to put his own personal stamp of domination on. Injuries are going to keep that from happening. Steve Peat seems a bit distracted with everything going on that comes with the Rainbows. None of the new school riders are consistent as of yet, except Cam Cole. I can see Greg Minnaar taking the win with Cam close on his heals. 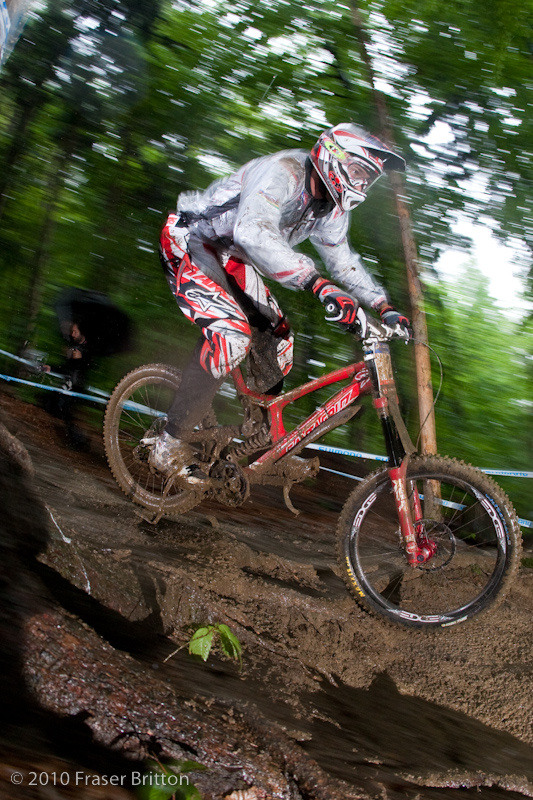 Fraser's vote for the Worldcup Overall Winner
If you were not shooting bikes, what would you be doing for work?
I honestly have no idea. Either working as a team manager or a print journalist for the AP or CP like a lot of my friends are.

Any shout outs you want to give out?
Thanks to Stewart at Canon CPS, Gary and Dawson and Lanning for helping me out in the past. Sven for keeping me on my toes and Liana for making sure I don't get too lazy. Sam and Brendan for not ALWAYS riding on each other's wheels in practice. Finally, Sean for keeping me around and providing me with a wide selection of hats and drinks!

ollyforster Plus (Jul 1, 2010 at 0:22)
Reckon the world cup is to play for, the upcoming tracks suite Gee really well and theres not much in the points, plus Sam will be back for Champery, possibly, which could thro things up 2! I'm just waiting for Brendog to win one, its gotta happen this season!

thegringo (Jul 1, 2010 at 16:27)
Wicked piece by the way Spoiledgoods,excellent interveiw,and the pics you chose are all obviousley awesome,but i'd have liked to have seen a couple of old skool pics,but it's fairly bulletproof.Being English it was hard for me to agree with ya on your pick of your favourite photograph,but i do,that pic of Minnaar is corking,though a very close second to
the photo of Steve Peat dealing with business,overall one of the best pieces i've seen spoiledgoods,so congrats m8.
Gringo.

dave-m (Jul 1, 2010 at 7:11)
Great interview! Fraser's photos where the inspiration that got me interested in mtb photography.

! That specialized Monster bike is unreal!

thegringo (Jul 1, 2010 at 15:24)
Yeah su11y m8,i noticed the coil on Brendogs,and ya can see the shock extender is different to on the air can.It has like a little bridge over it that actually loox like part of the swingarm.But it's just the shock extender for the bulkier,heavier coil shock.Good to speak with ya su11y.
Gringo.

thegringo (Jul 1, 2010 at 16:09)
What are you talking about,nothing of the sort was said.By me,nor anybody else.Read the above comments then post up.Brendon Fairclough is riding a "prototype" in the pic above,as the pic is a couple of months old,but it is the 2011 Demo 8,i merely said the prototype seen above is unchanged to the official "2011 Demo 8",as seen on todays home page.The 2010 Demo was never mentioned until you mentioned it.
Gringo.

thegringo (Jul 1, 2010 at 20:38)
No probs philbike m8,i'm partly to blame for not explaining my answer to godfried more thoroughly,as i'm sure that was my comment you were referring to so no bother philbike.
By the way philbike,where do ya stand on the new look Demo,cos i was really surprised by the amount of people who just flat out didn't like it,and loads of people who'd have liked it to stay unchanged,it's a real mixed bag at the minute.But i loved it as soon as i seen the prototype,i also love the old one,but now it's official about the 2011 Demo 8,i'm over the moon,i think it's a stonking bike,it loox fast even when it's stood still,and watching Curtis Keene ragging it about,the newlook suspension action also loox gnarly.
Good to speak with ya philbike.
Gringo.