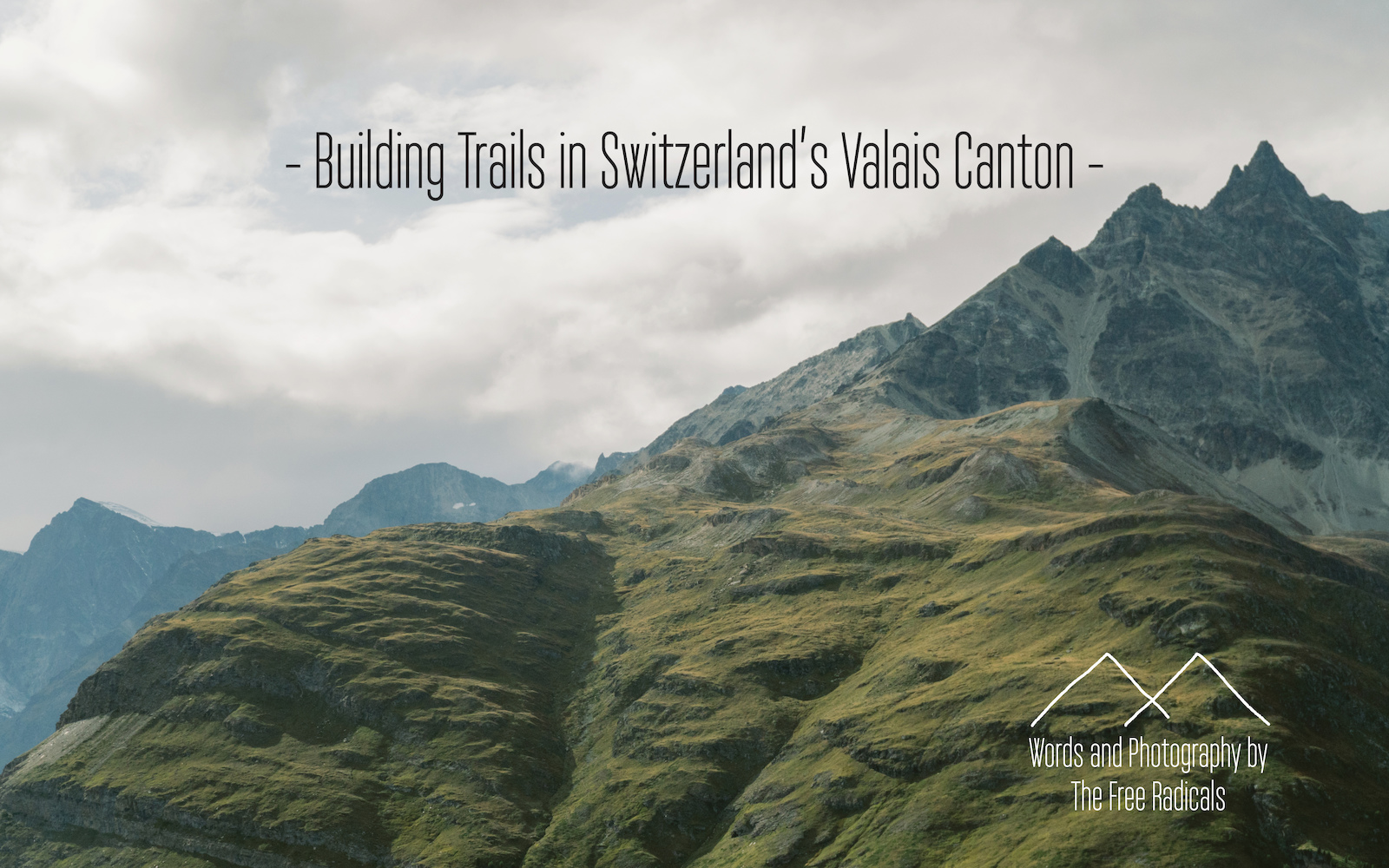 Words by the Free Radicals

Traveling halfway around the world to arrive the night before practice of the Enduro World Series Finals is not the recipe for a successful race. I, not wanting to practice alone as Mark was sidelined by a thumb injury, snuck into the Pro’s practice schedule to follow the Specialized Enduro team and a few fellow countrymen from Rocky Mountain.

This was my second mistake. Trying to chase some of the fastest guys in the world doesn’t bolster confidence - I could barely manage to hold onto my bike whilst mouth breathing in their dust.

Come race day, the trend continued. Thanks to jet lag, I slept for a combined total of two hours the night before the race. This lead to a new race-day strategy where I pedaled the liaisons as fast as possible so I could sneak in a quick nap before dropping in. Being my first EWS race since 2016, the event in Zermatt reminded me just how gnarly the EWS field is - these men and women fly down trails they have only ridden once before. Props to them! Despite the fatigue, the race was fun and I was happy to make it down in one piece. As soon as I crossed the finish line, the real purpose of our adventure was just about to begin. 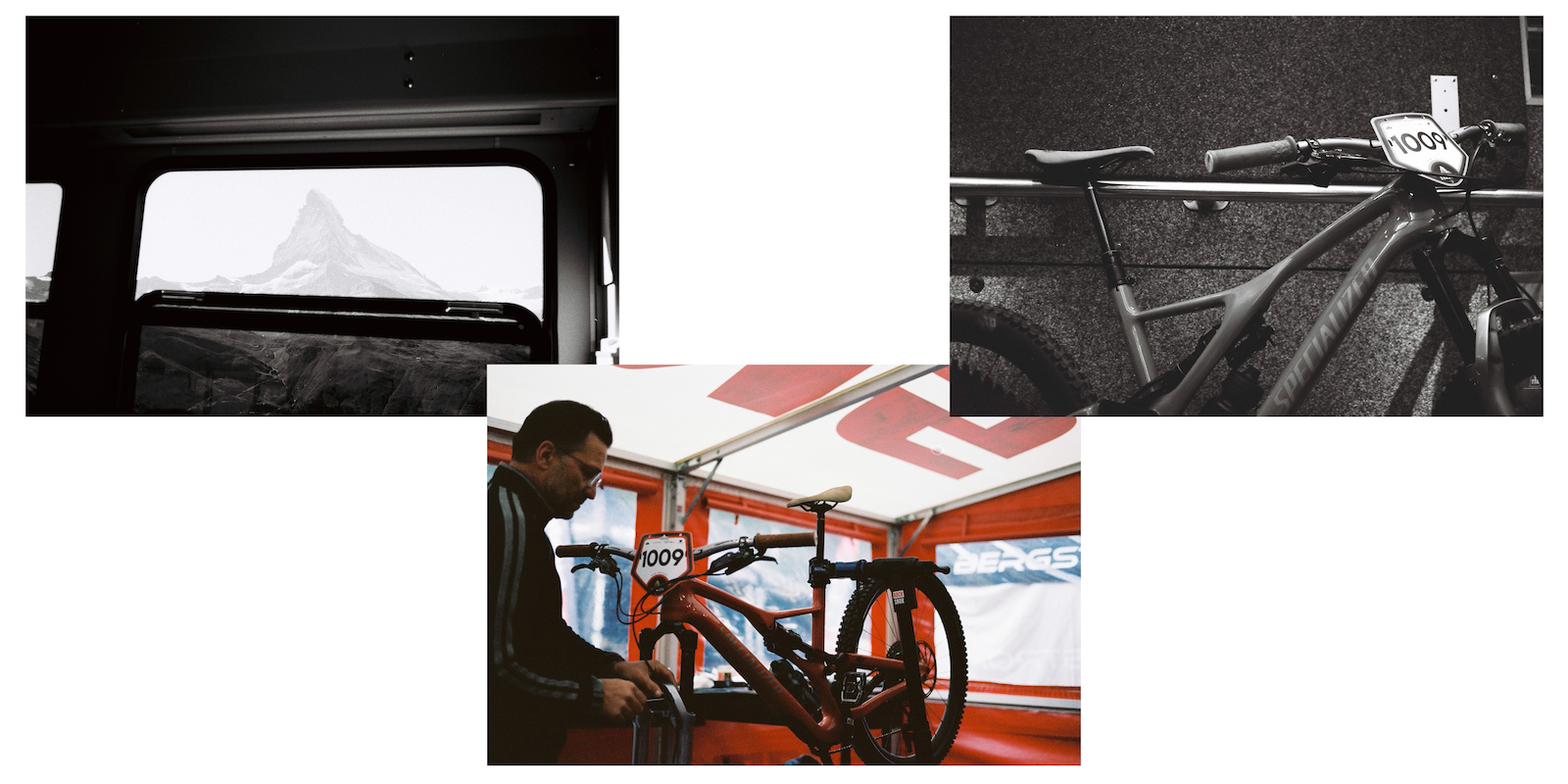 In September, Mark and I were invited to Europe by Fanie Kok of Soil Searching to share the stoke at the final round of the EWS, Soil Searching Dig Day, and Trail Love’s second annual trail builder summit, in Zermatt, Switzerland.

Fanie is an eccentric South African mountain bike enthusiast and the mastermind behind Specialized’s Soil Searching initiative, which strives to celebrate and empower trail builders, advocates, and associations by raising awareness of their efforts and contests. Fanie is vocal with his dream of an industry where brands support trail builders the way they support athletes and ambassadors. He works tirelessly to build Soil Searching to realize this dream.

Soil Searching is the official trail partner of the EWS, teaming up to host three dig days at race venues in Derby, Whistler and Zermatt. After attending Whistler’s Trailworx Dig Day in August, we were excited to meet with the local builders in Zermatt, check out the trail network beyond the race tracks, and learn about building trails in Switzerland. 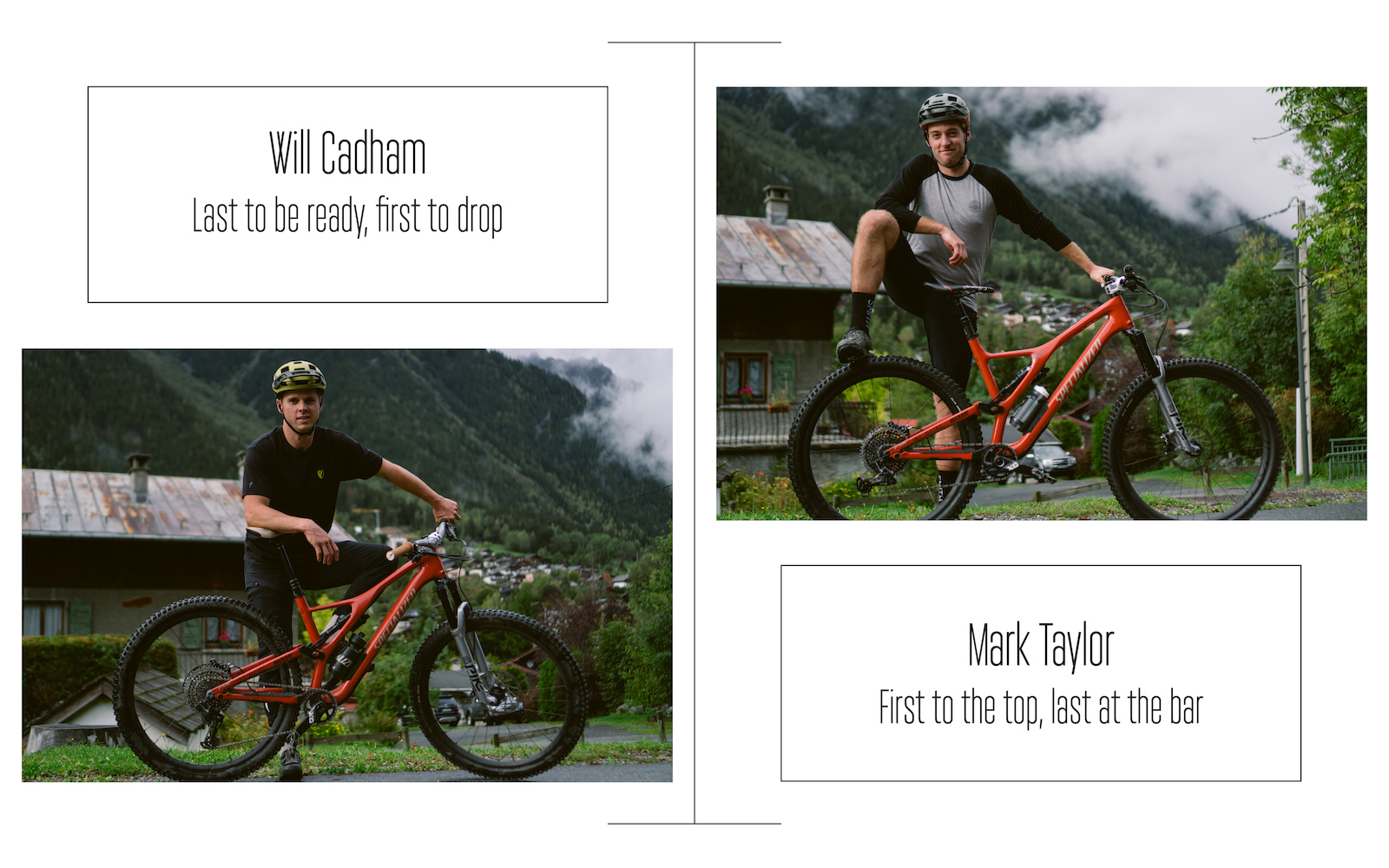 With a crew of nearly 40 volunteers, we spent the morning after the EWS Finals fixing up an old 4X track in an effort to make it more kid-friendly. Despite recent efforts to add machine-built flow to their bike park, the trail network in Zermatt is dominated by old, very rocky and tricky-to-ride alpine hiking trails. The trail work we did is invaluable to this network, as it gives beginners and intermediate riders a place to hone their skills before challenging themselves further. 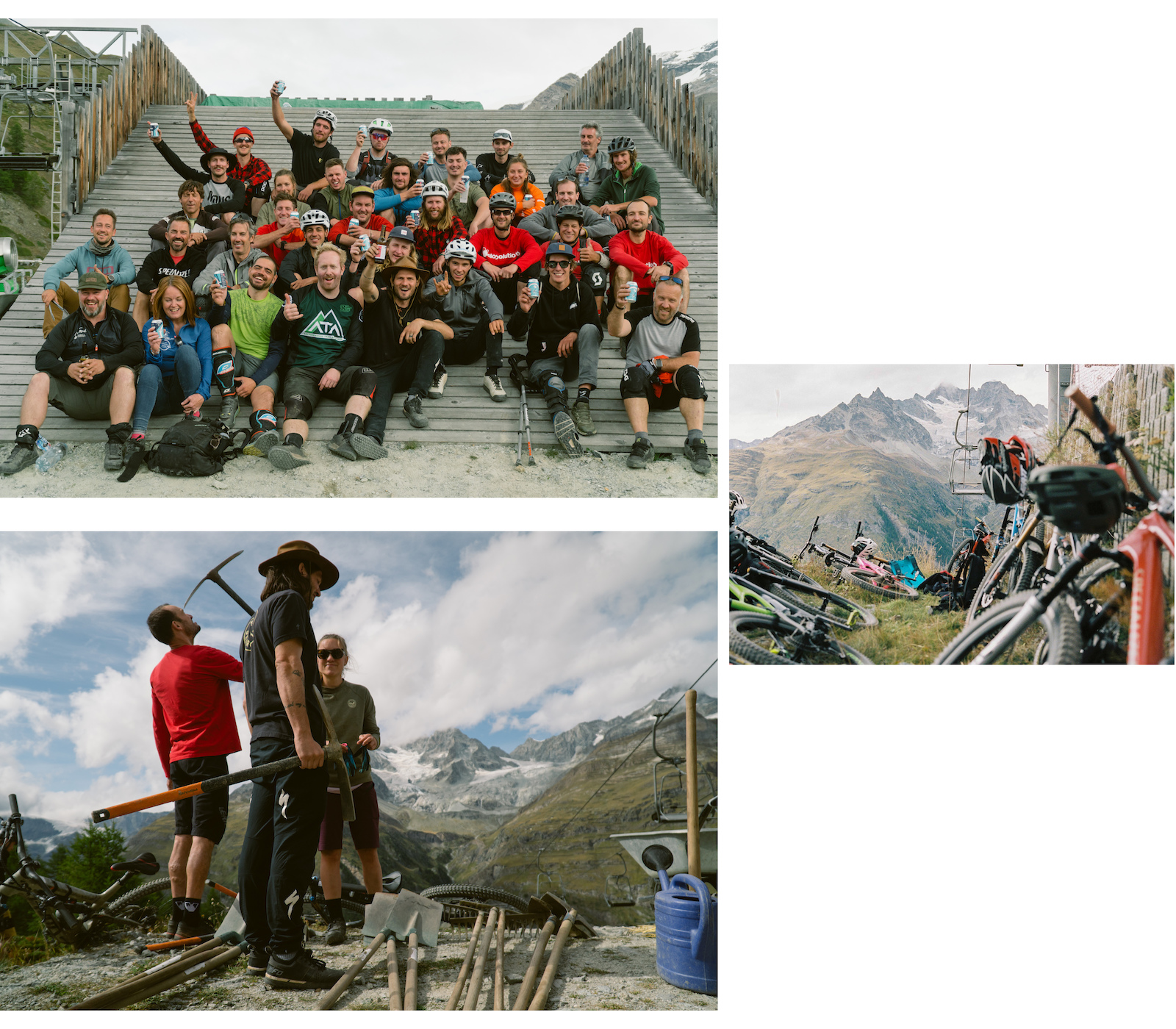 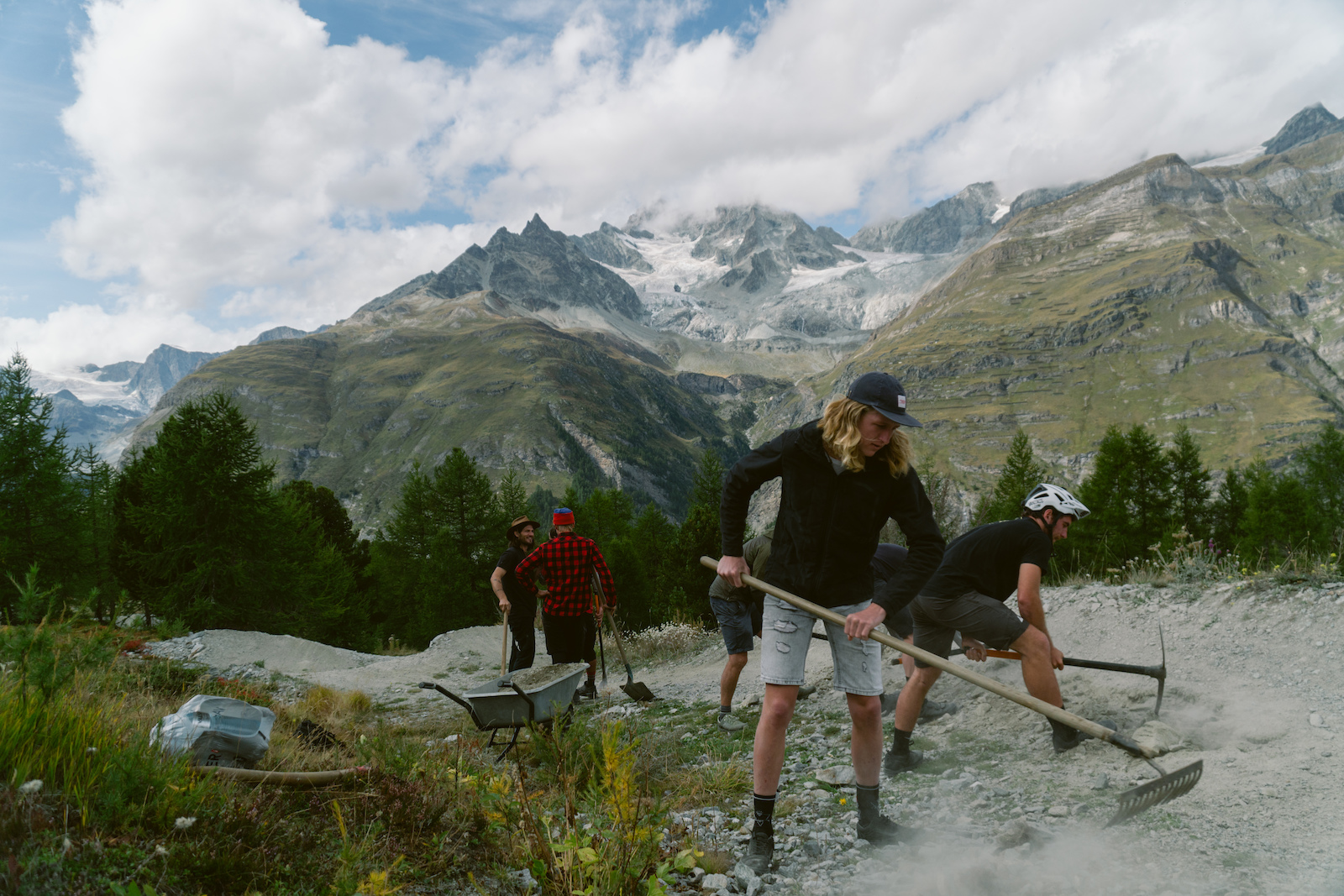 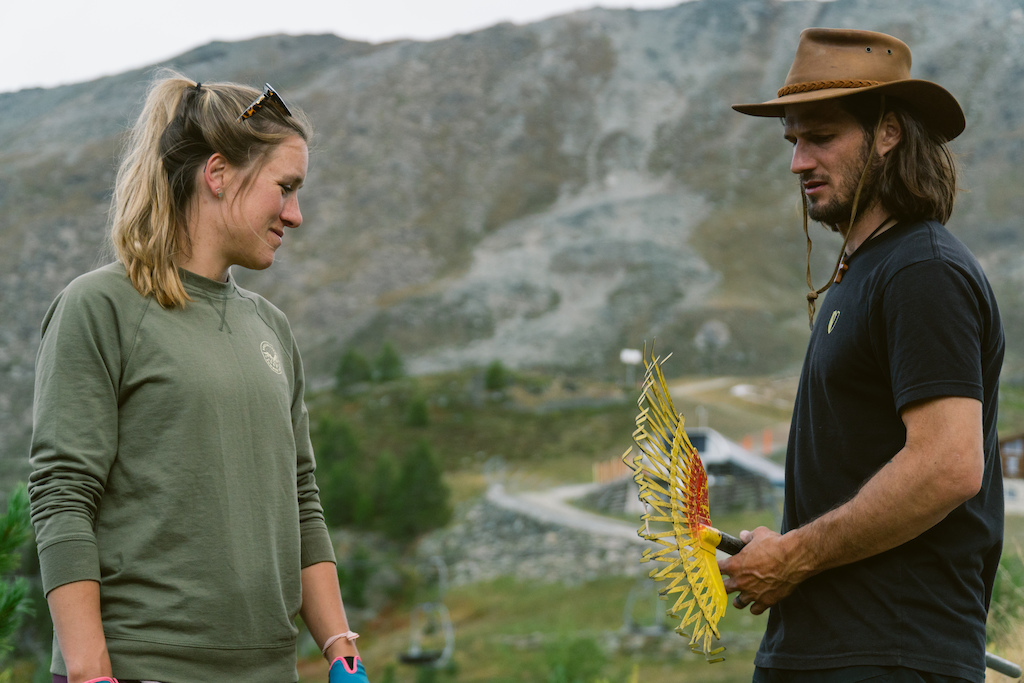 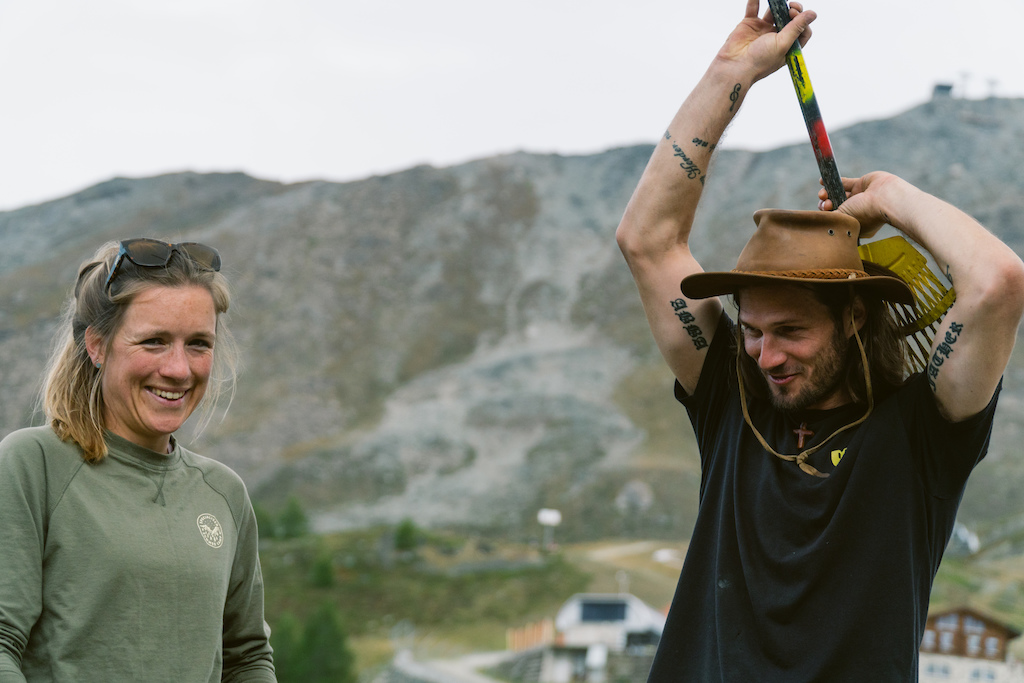 What's this thing for again?
After the crew fixed the last of the berms and lips, we were treated to a hilltop BBQ lunch with a killer view. Swapping tall tales of traveling in order to build, ride and race, it was rad to see so many people with a breadth of backgrounds, languages and professions all come together to volunteer their time to get dirty and sweaty while moving dirt around a mountain. 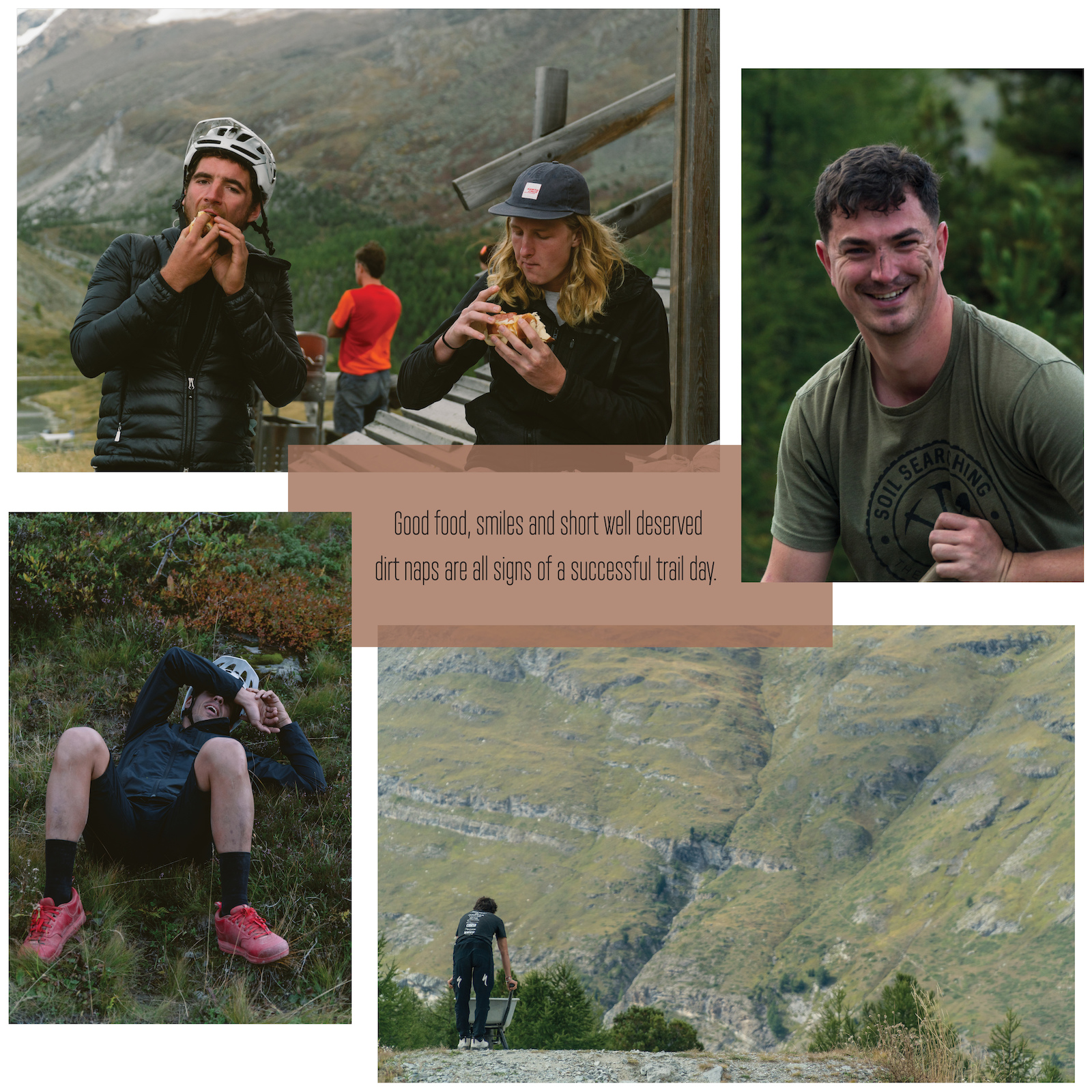 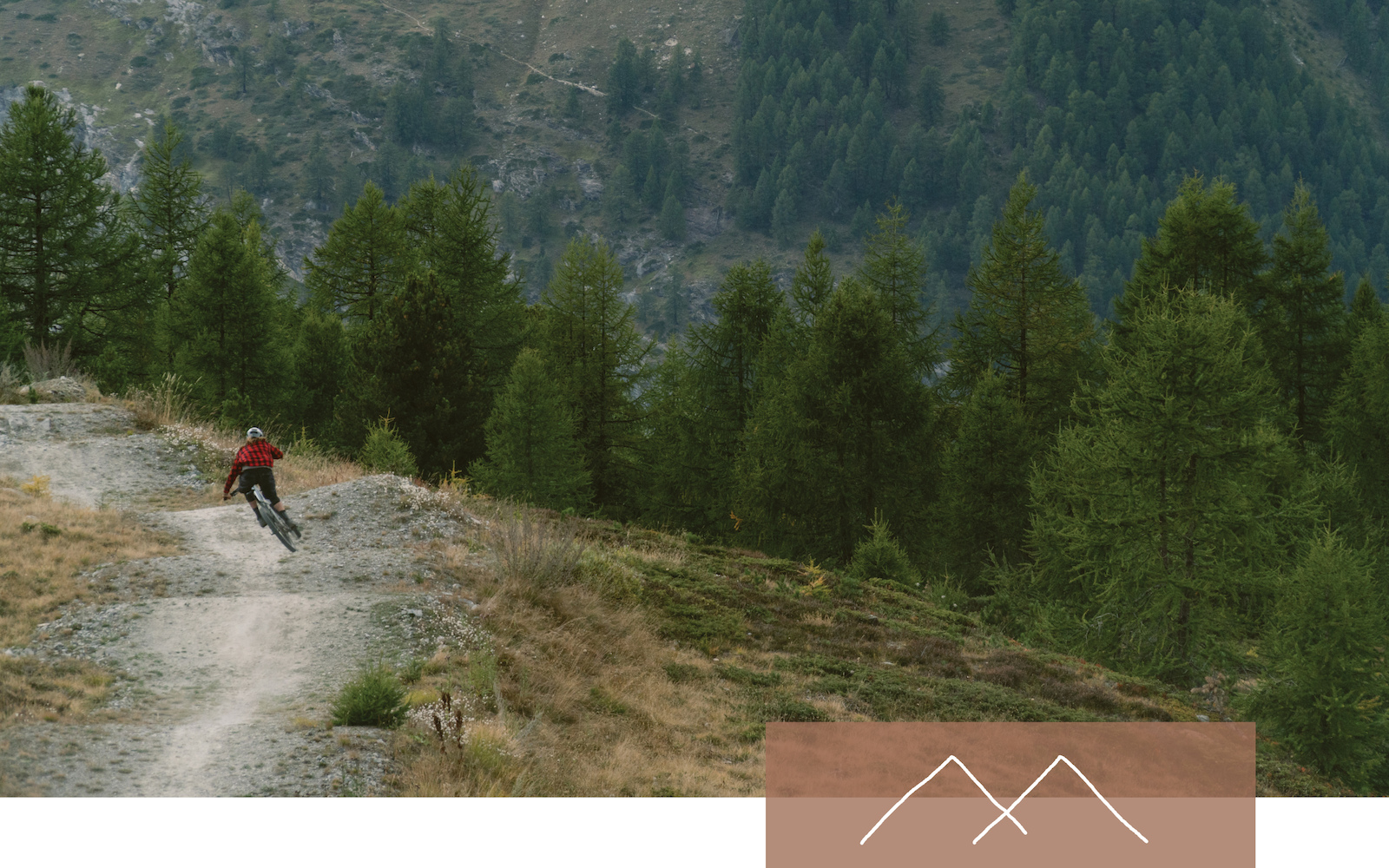 While digging in Zermatt, we met Sylvain Haederly, friend and riding buddy of Max Chapuis, a young gun on the Specialized Enduro team. After the BBQ, Max and Sylvain took me on their favourite lap in Zermatt, a series of trails that weren’t included in the race. I had a blast trying to hold their wheel as we charged down to the valley floor. Sylvain, a trail builder and mountain bike coach at Verbier Bike Park was hosting a low-key dig day a few days later and invited Mark, Fanie, and me to join in. 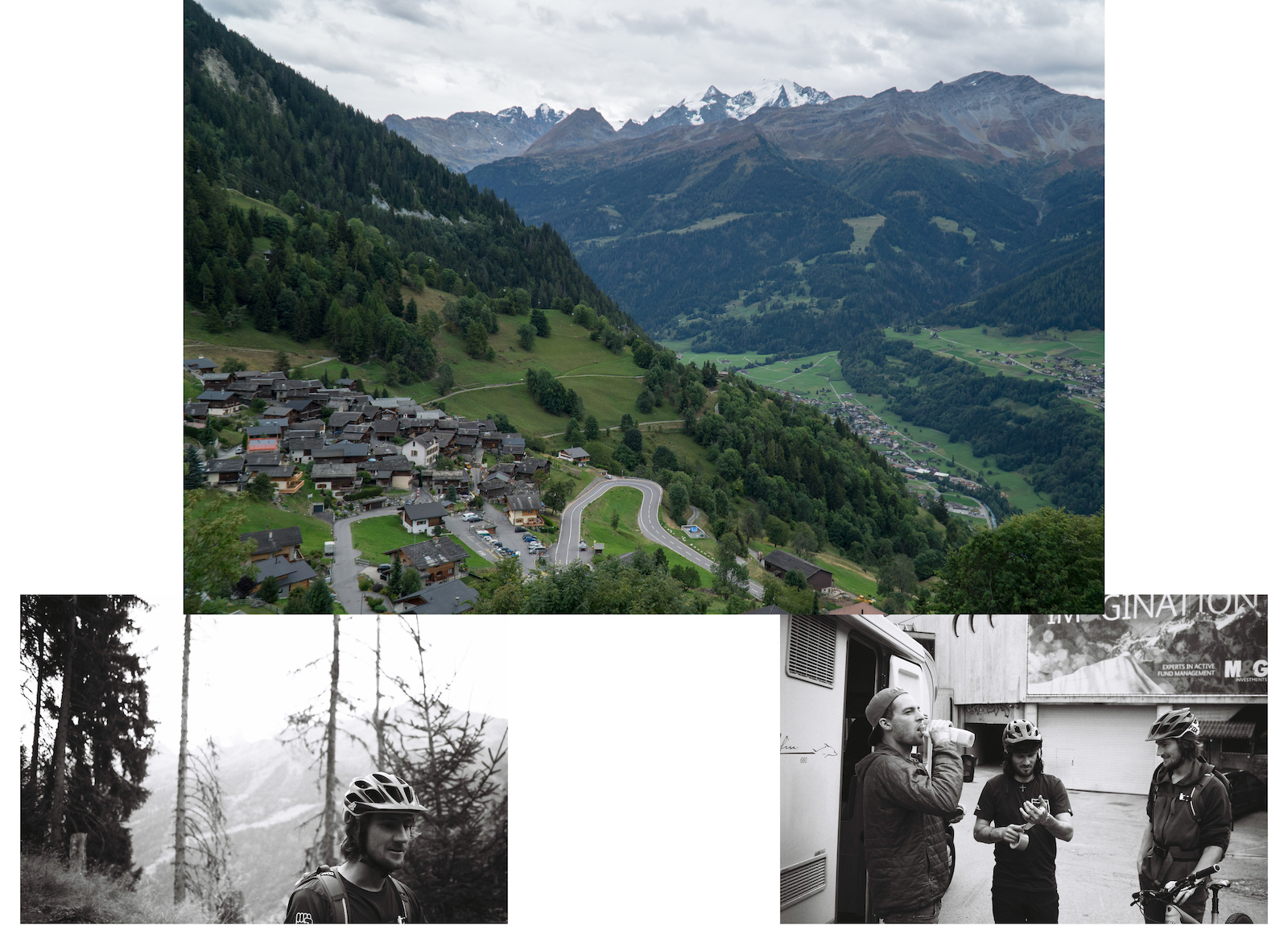 Sylvain, like many trail builders, would rather be in the woods digging. He would also rather not have his photo taken, sorry Sylvain!
After an early morning departure from Zermatt, which included a hill bomb to Tasch, we smashed some croissants and espressos from a gas station cafe, before piling into the RV and heading to Verbier. Once in Verbier, we met up with Sylvain and five friends on their favourite local trail. Known to locals as “La Dent” it drops riders out of the Verbier bike park almost 800 meters over three kilometers down to the valley floor below. While hiking up to the worksite with my head on a swivel, constantly scouting different lines, I was frothing at the thought of bombing down the trail a few hours later. The ribbon of singletrack weaved through a widely spaced pine forest creating amazing sight lines as you descended a hillside of near-perfect grade. The soft soil and roots looked fun and forgiving; a stark contrast to the rock, rock and more rock, that made up the trails in Zermatt. 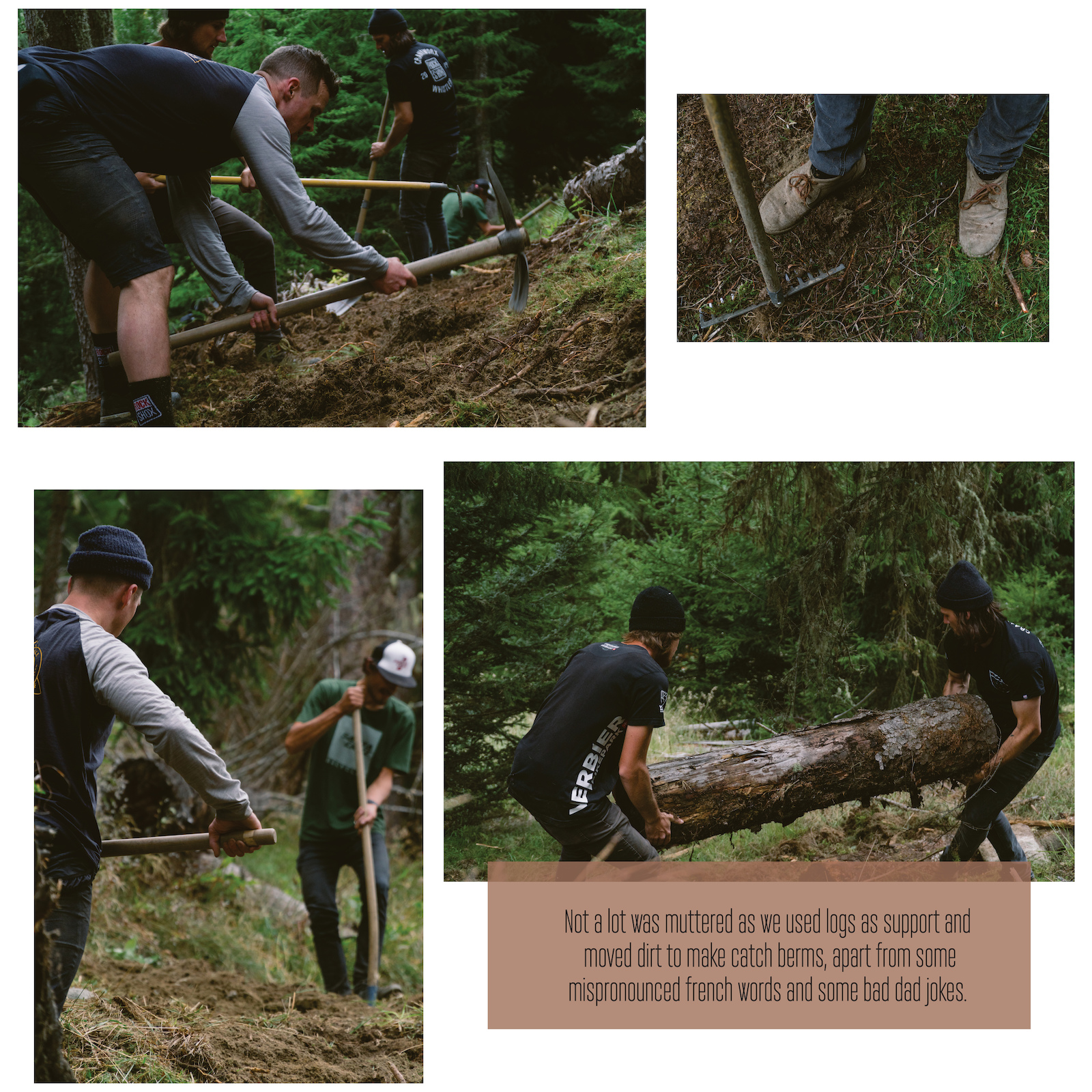 The gang worked on a small reroute of a particularly straight and rain-rutted section of trail, adding some turns to dump speed and water. We were elated to find great building conditions and shovels were put to good use, very quickly. Spurred on by the progress that was unfolding in front of us, the group made quick work of the day’s objectives. The section would have taken the trail crew the better part of a day, but many hands make light work and a few hours later we were at the access road, enjoying Swiss sausage, cheese and red wine for lunch. 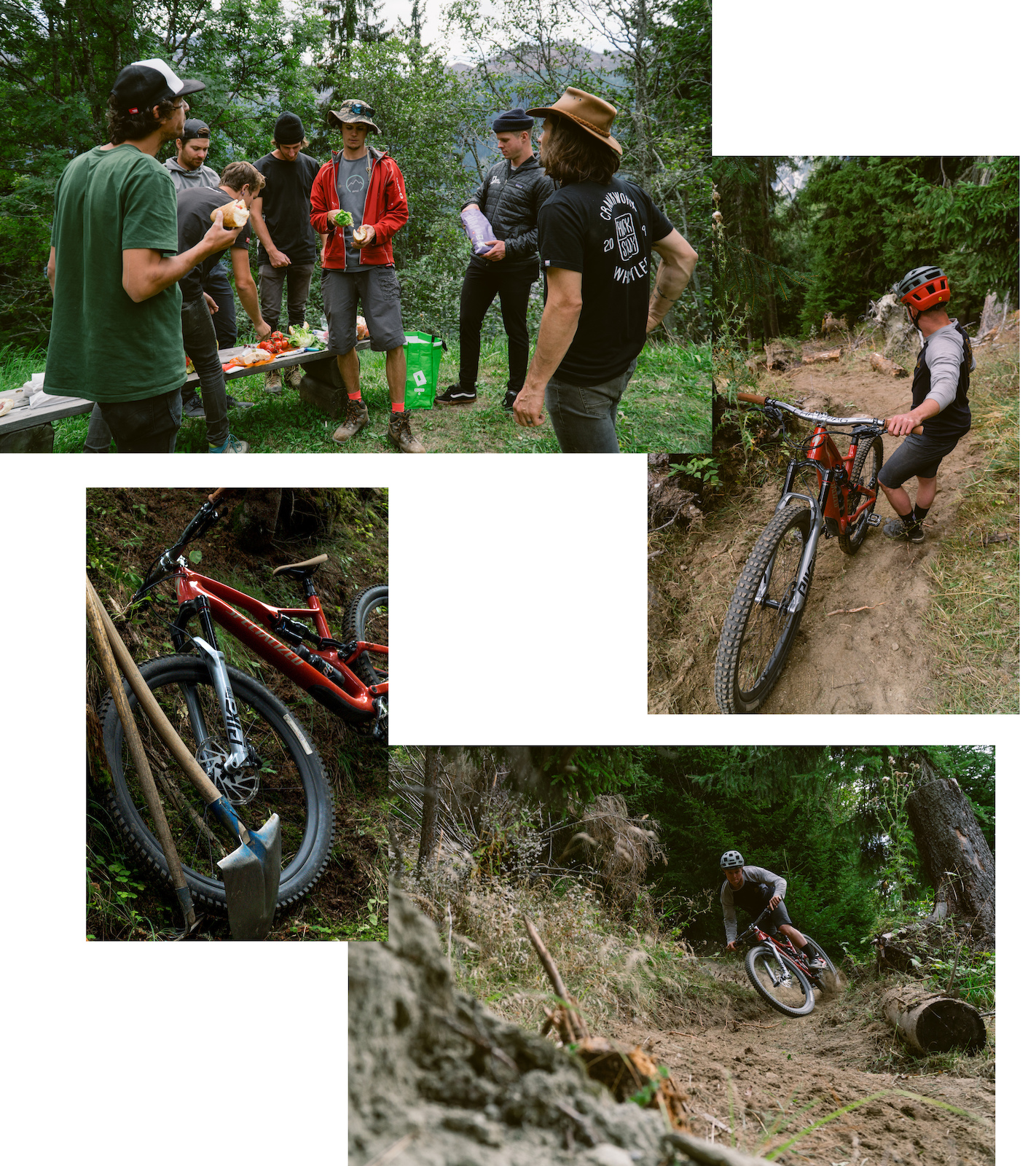 After lunch, Fanie, Sylvain and I shuttled to the top of the trail. We quickly unloaded and chased Sylvain down La Dent while he set a blistering pace. Sylvain was confidently popping over blind rollers, finding all of the sniper side hits, blasting into tech rock sections with pace and shutting it down just in time to nose-pick through the tightest switchbacks. Afterall, Sylvain had to head into Geneva for work later that afternoon. As always, it was great to follow someone who knows the ins and outs of what we were riding. 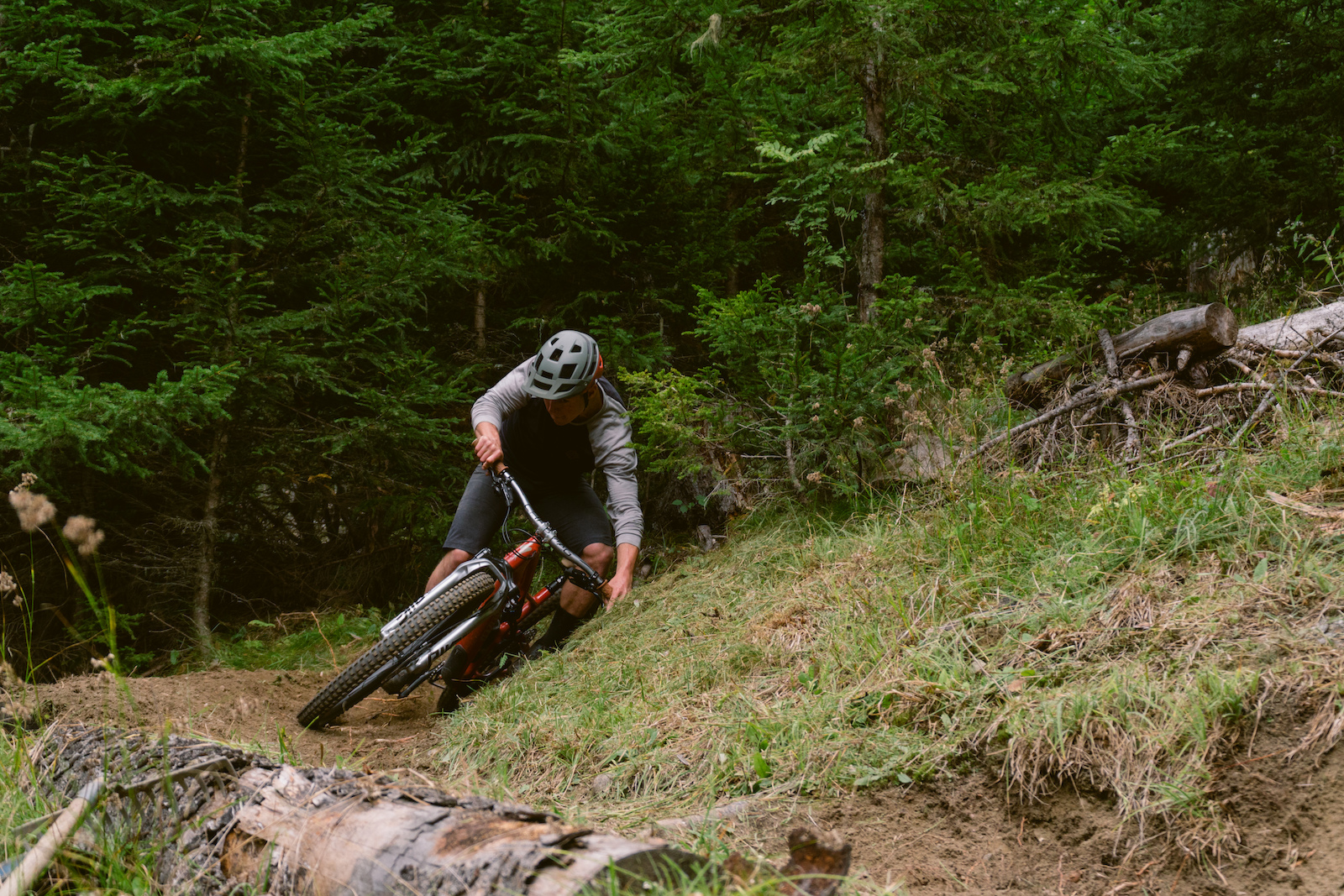 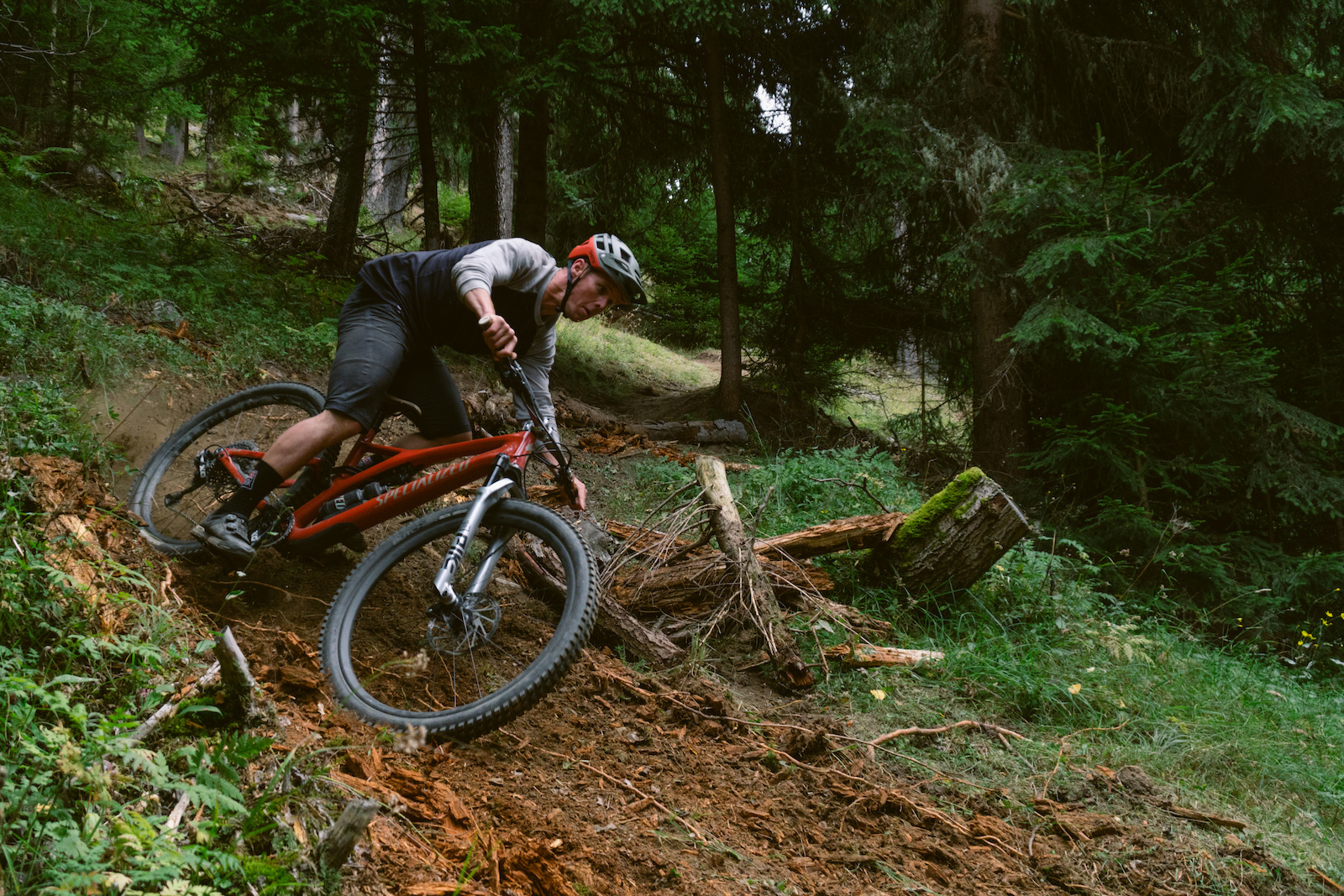 Thank you for the great morning of digging and the tow down your trail Sylvain - we can’t wait to come back next spring and explore more of what Verbier has to offer, and to return the favour when you come visit BC!

Huge thanks to Soil Searching and RockShox for making this possible

Me- last to the top, first at the bar!