From the Road - Sunday Comics with Taj Mihelich 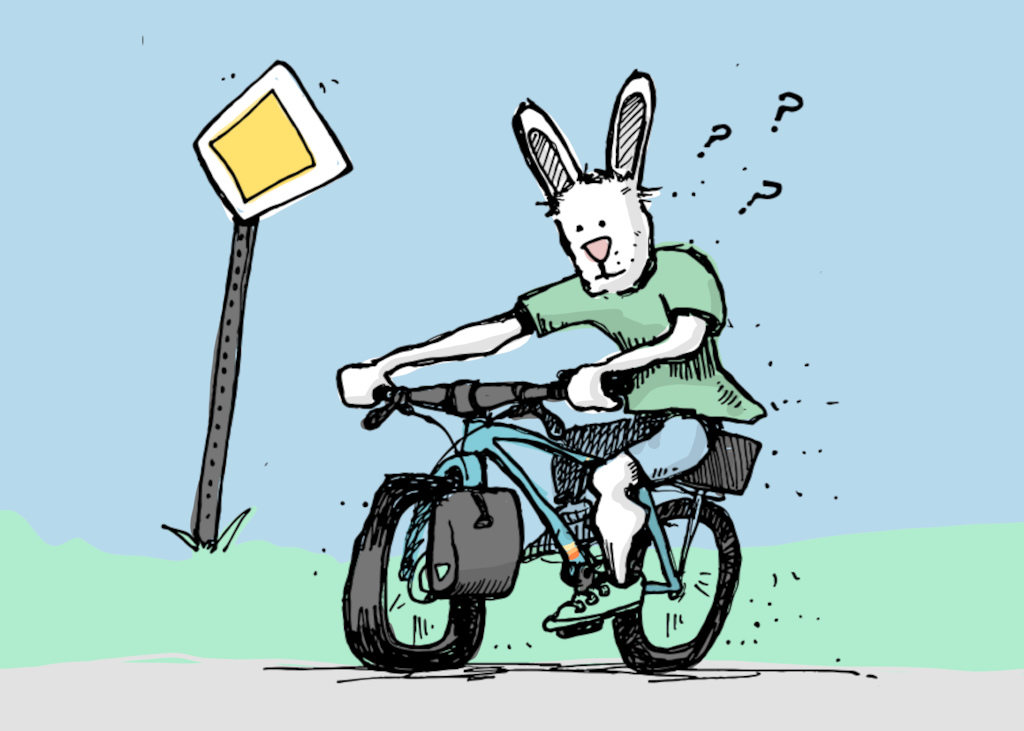 I have been cycling in Europe for the past two weeks. I did A series of drawings for the Vans BMX Pro Cup and they flew me over to an event in Germany. To make the trip interesting (and to not just stand around like the old washed up BMXer that I am) I decided to ride from Geneva, over part of the Alps and then up the Rhine River Cycle route into Germany. All in all, it has been a pretty epic 10 days of living out of a pannier bag and rewashing the same riding gear in hotel sinks. I know Pinkbike isn’t about bike touring but let me say that exploring a new place by bike is a pretty darned awesome thing to do! Climbing over and the alps in Switzerland was especially amazing. 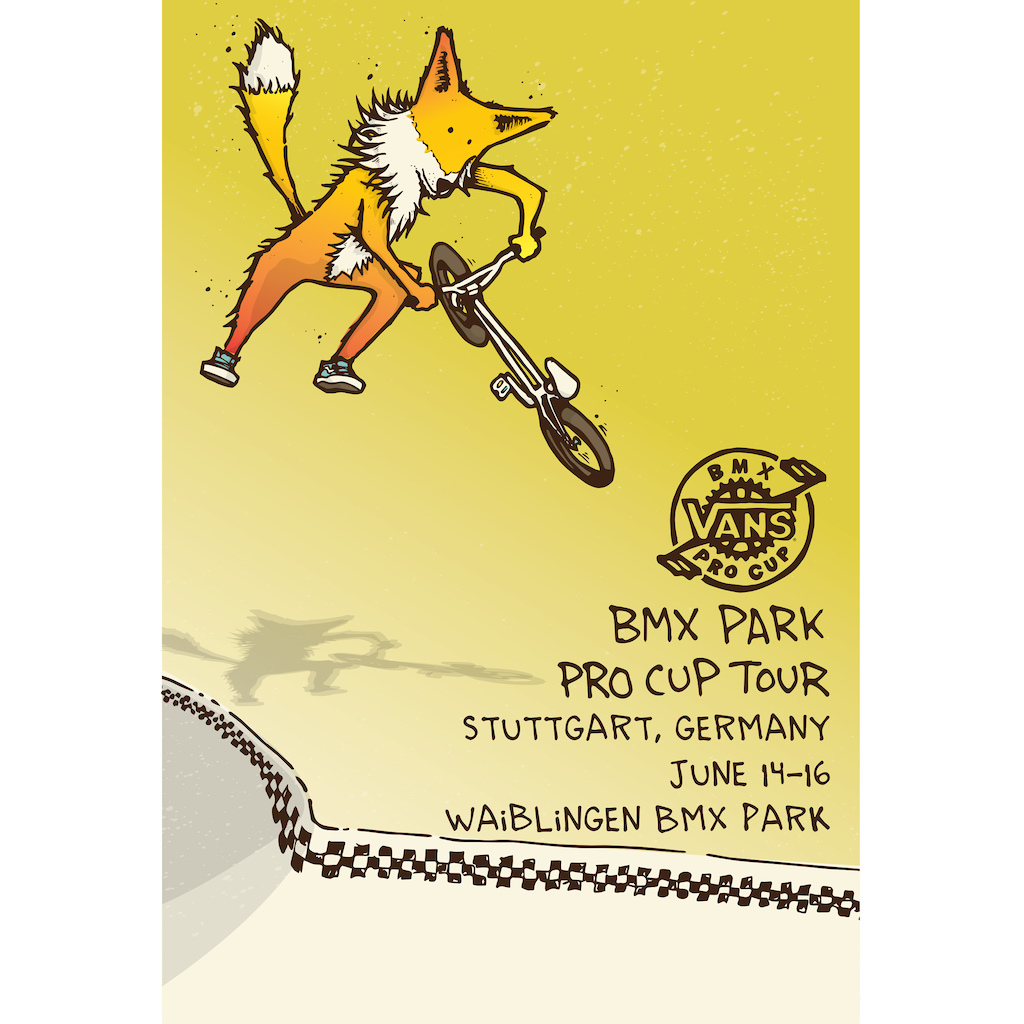 It might have been smart to learn a little about the road signs in the countries I was going to explore but I didn’t. Instead, I found the pictograms on the signs in Germany, France, and Switzerland often vague and funny. Without much for my mind to do during days of pedaling, I would imagine funny alternatives to what these signs might be trying to tell me. I’m a bit limited on how I could draw these from the bike but here’s a few of them. 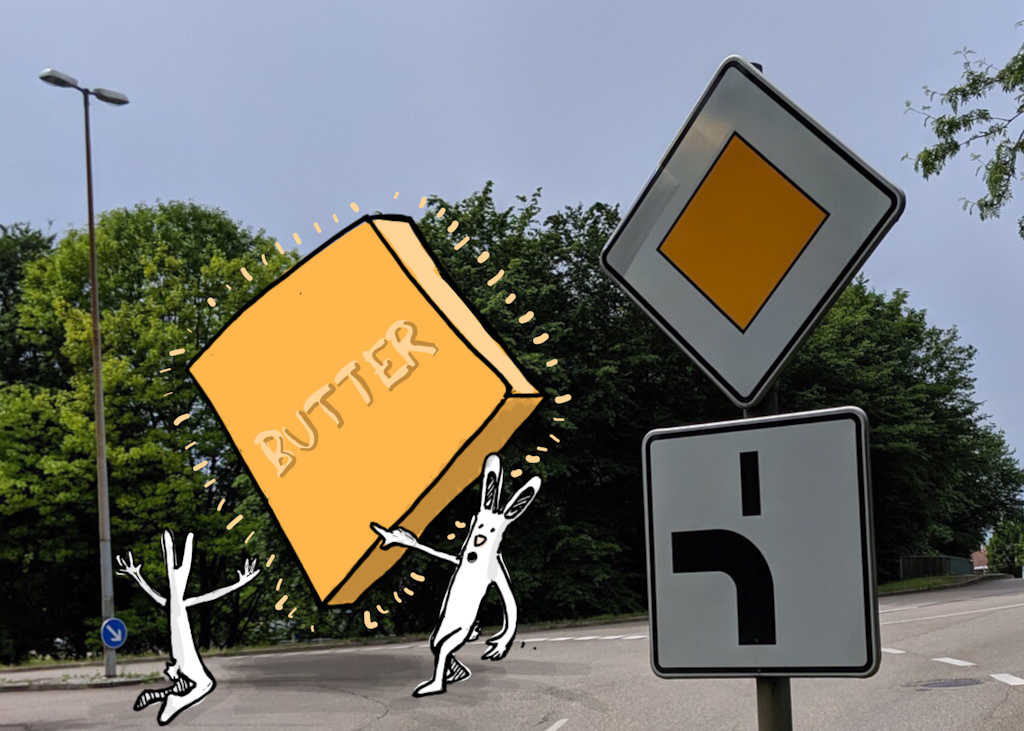 This sign with the yellow square and no text was everywhere. What does it mean? I kept hoping to see a gigantic square of butter in the road. 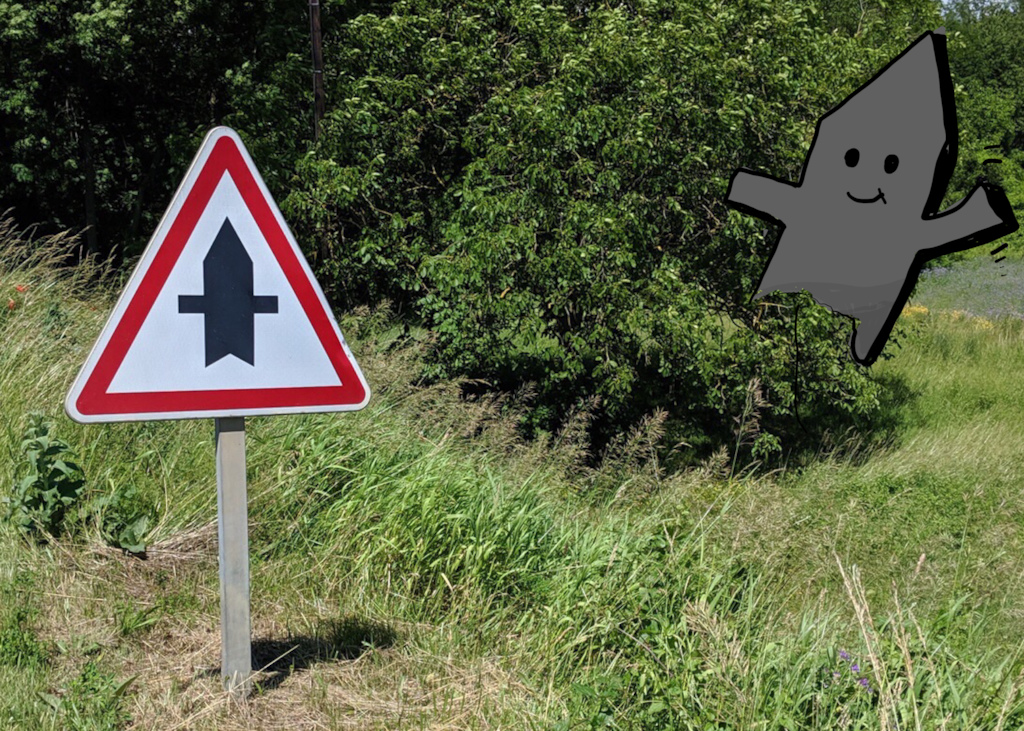 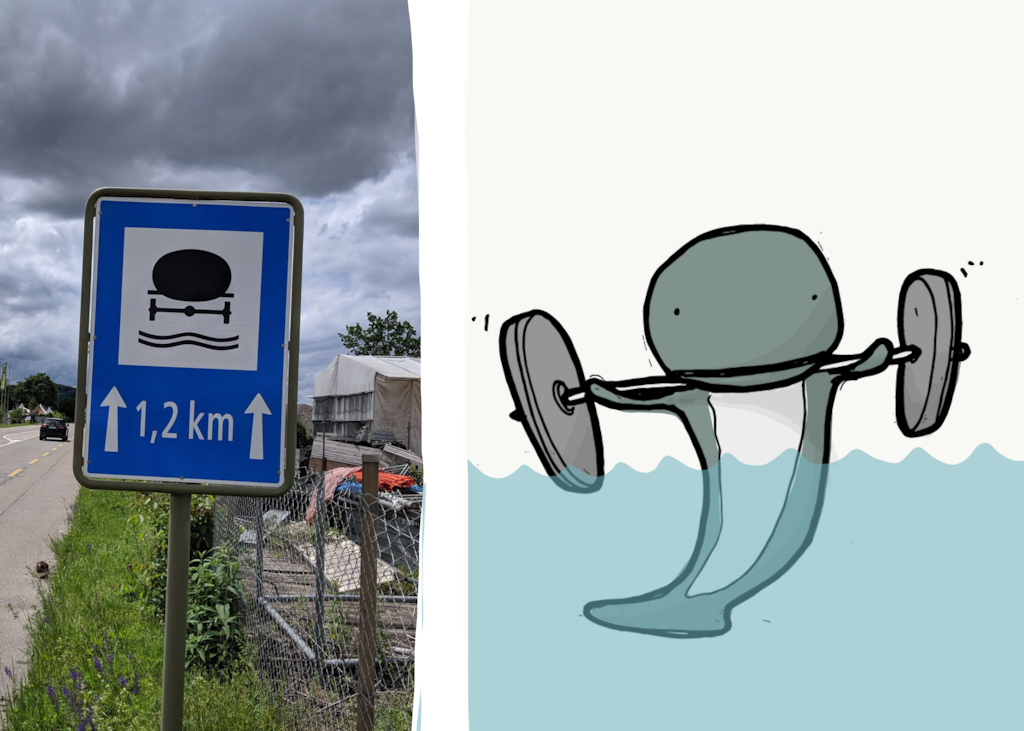 This sign’s pictogram I could never figure out. A whale doing curls with a barbell is my best guess. 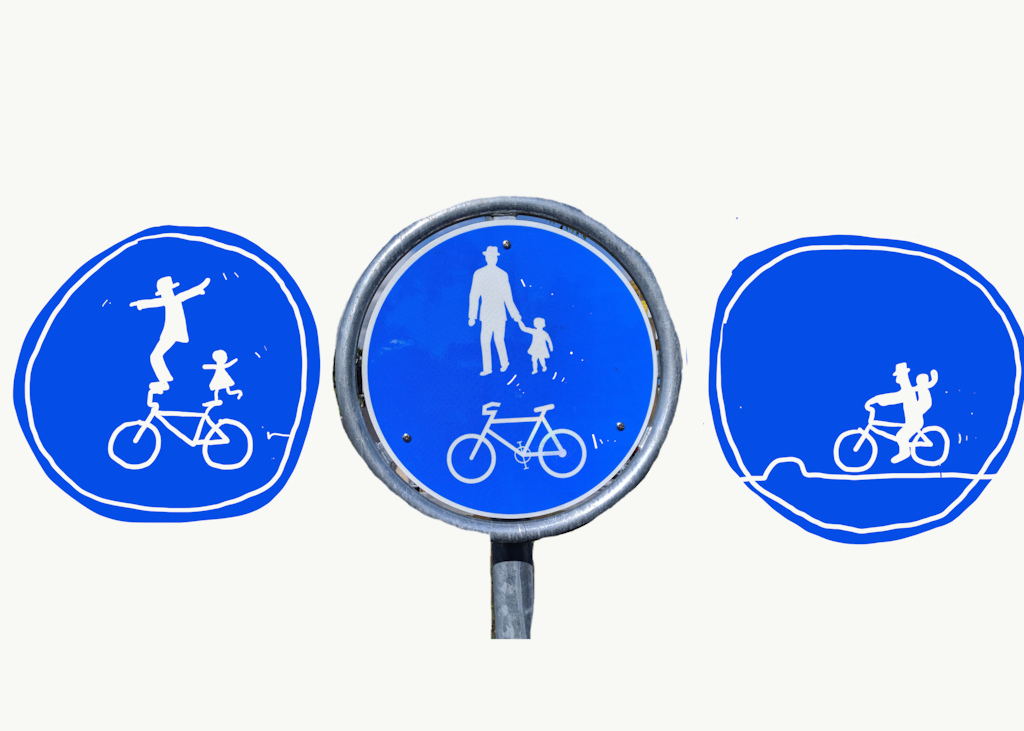 This two people hovering over a bicycle had my imagination going all over the place. Did they just hit a harsh curb and find themselves ejected from the bike? 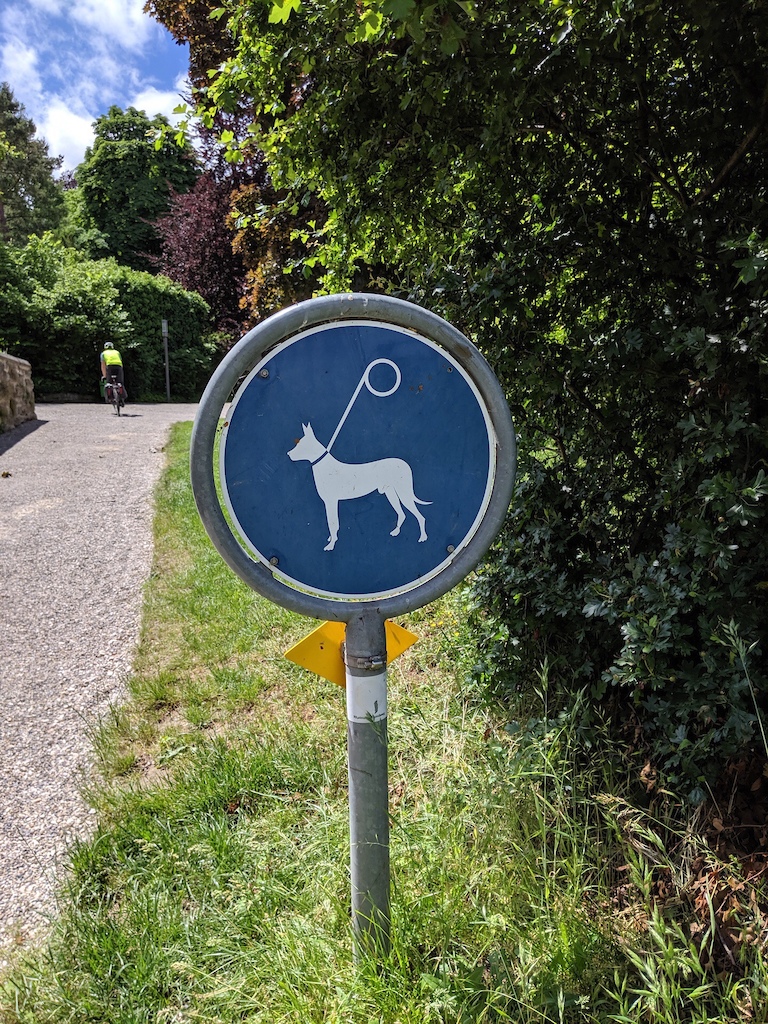 I think this looks like a dog with a grenade pin. 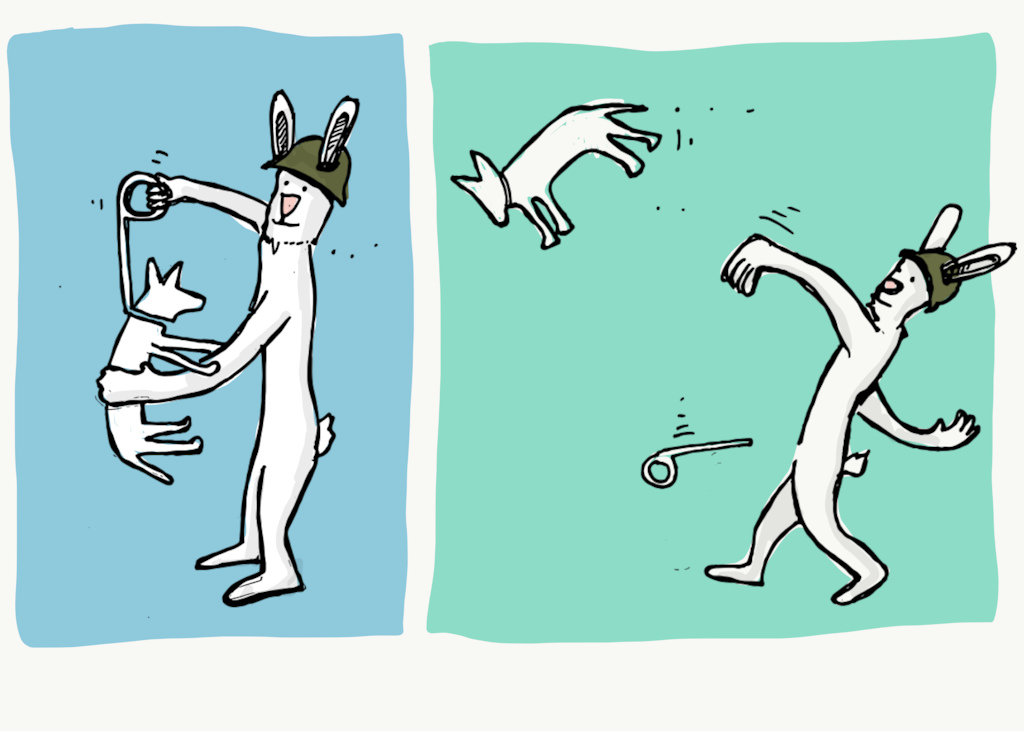 ReigninAus (Jun 16, 2019 at 5:33)
Sign with the yellow square means that on the main road all vehicles have right of way. Normally, when you don't see this sign in Germany, the rule is that right before left. That is, those cars coming from the right have right of way.

natbrown (Jun 16, 2019 at 21:33)
Totally natural response I'd say. Thanks. There's little anyone, German or not, can do to help some people understand that stereotypes are of limited use, and that real explanations are actually very useful.

ctd07 (Jun 17, 2019 at 4:59)
@colincolin: *back to improving algorithms on ECU's so they can better detect when they're being tested for emissions and when they're not

ridersmitty (Jun 16, 2019 at 7:36)
These had me chuckling all the way through. So rad following his trip on instagram. Couldn’t agree more that biking through a place is the best way to see it!

nprace (Jun 16, 2019 at 22:44)
A short while back there was a stink in Switzerland raised by some women's groups about how the sign of the father leading his daughter to school implied that women are not capable of this or responsible enough or doesn't address single mothers blah blah blag...or some such nonsense...now the sign is gender neutral... So by the way in case someone is wondering what people do in a country with no problems...

cxfahrer (Jun 16, 2019 at 7:26)
The people vs bicycle sign has some distinct variations: the sign shown this is "mixed", you can choose where to run over pedestrians.
If the bicycle is on the right side of the people with a white line in between, then make sure to be on the correct side on the bikelane. Mostly they ran out of red paint in Germany, and that is where the guessing starts.

Strange you missed my favorite "car falling into water" sign, which you can find quite often at river Rhine

colincolin (Jun 16, 2019 at 5:55)
Taj's interpretation was perfect! It actually means you're driving through a water pretection area and better not crash your tanker truck.