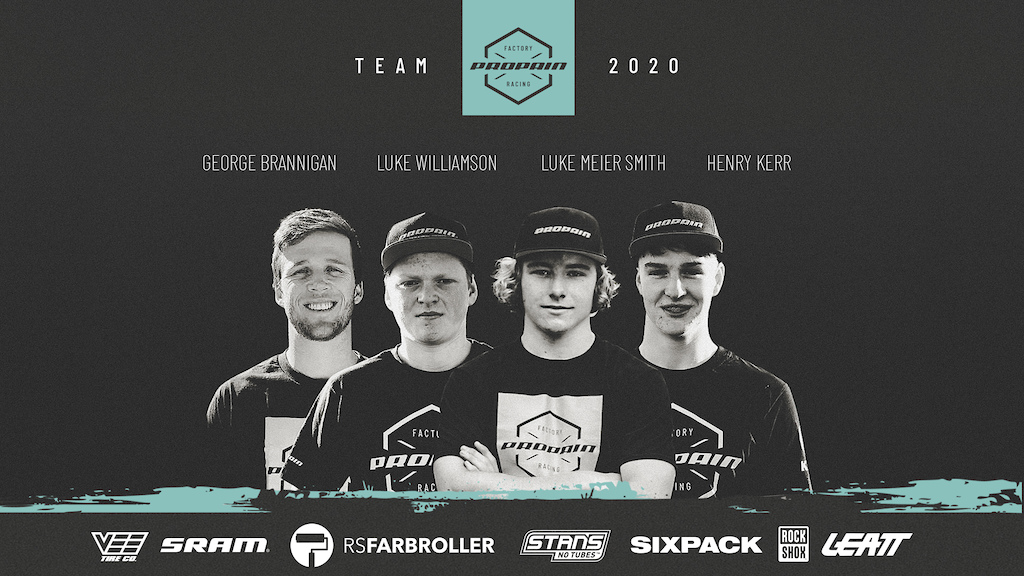 As they do each year names have been flying around the old rumour mill and here we find out if they have been on the money as far as Team Propain goes. Propain Bikes is a mountain bike company just outside of Munich in Germany and coupled with their sleek designs and well-engineered suspension, their company is built around riding bikes and having a good time. They are not super corporate and don't intend to be. They want results but more importantly, they want it to be fun along the way.

For 2020 Propain looks for a team to represent them and in search for the top, Propain looks to the very bottom of the globe to a couple of wild men; adding New Zealand's George Brannigan and Australia's Luke Meier-Smith who will join Luke Williamson and Henry Kerr for a two junior / two elite team. All under the management of former World Cup DH racer Ben Reid. 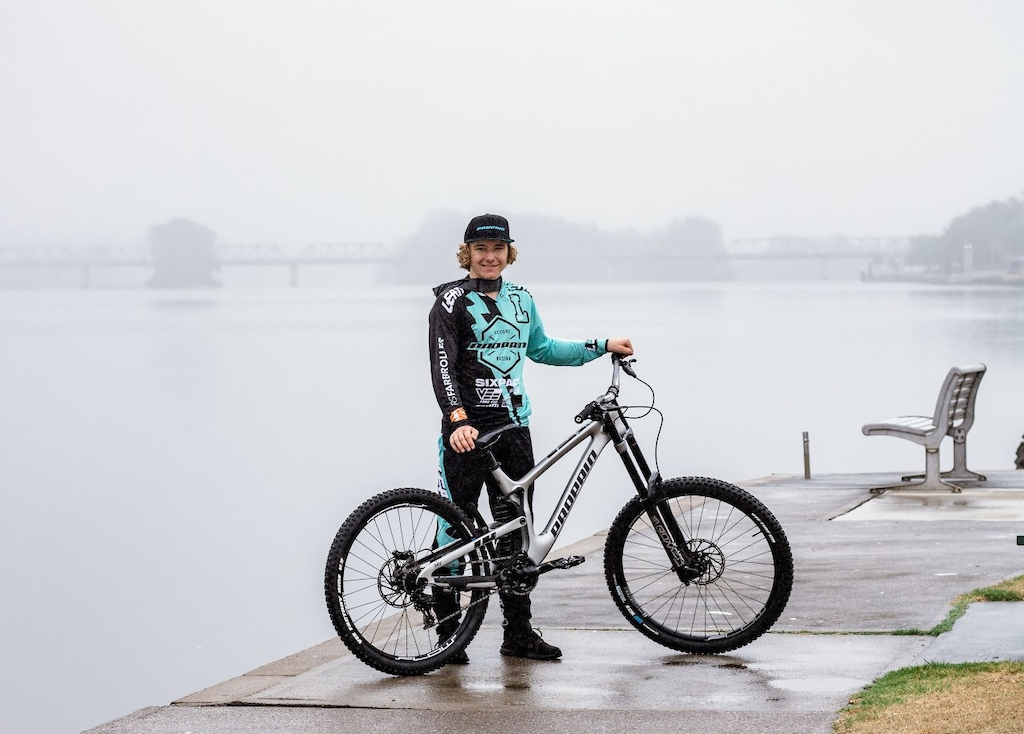 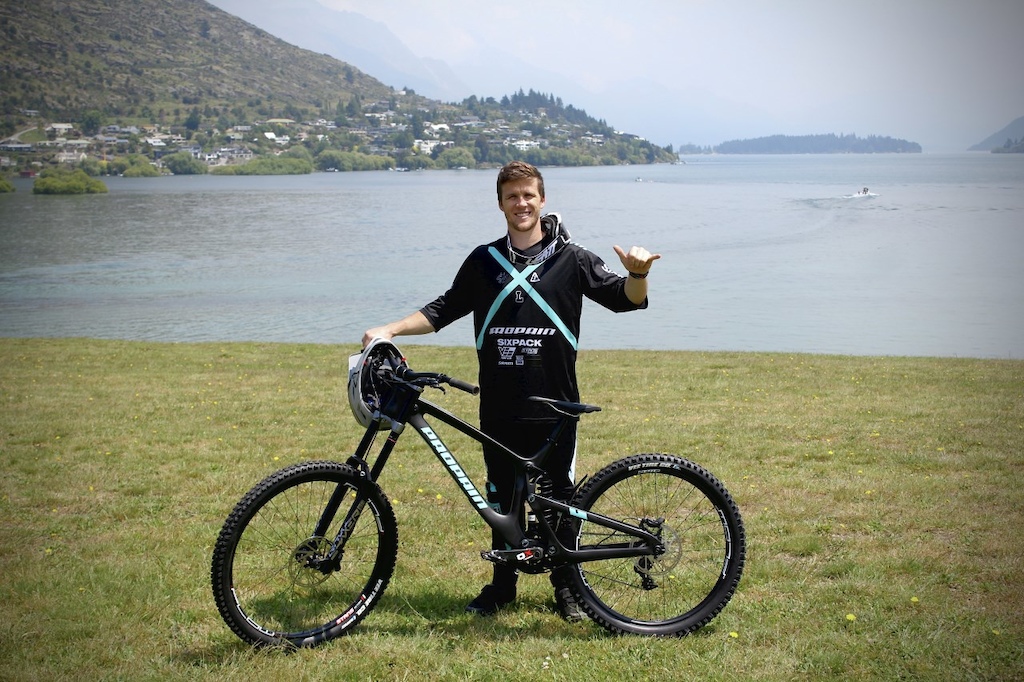 Some words from Propain:

We are over the moon here at Propain with our lineup for 2020: Henry Kerr is moving into his 4th season with the team and although his first year as an elite was no reflection on his impressive junior results when he took 2nd overall in the World Cup series and won the British series, we believe in Henry’s ability and know he is training hard to make it in the elite ranks. While Luke Williamson’s 2019 World Cup results didn’t reflect what he is capable of, now with his first year on the World Cup circuit behind him, we look forward to Luke feeling more at ease and watching his true ability and speed coming out on the track.

Welcoming our two new riders we cannot be happier having George Brannigan and Luke Meier-Smith on board. Luke impressed us from early 2019 when he posted a 4th place at his first-ever World Cup in Fort William, Scotland. From then, Bike from Vee Tire Co first hooked Luke up with tires and really brought him to our attention. Although we didn't have space on our factory team at the time, we gave him a bike and with nothing but the support from his parents, Mal and Tanja, Luke went on to finish the season strong with a 2nd place at the World Cup finals. We had built a great relationship with Luke and his parents and knew he was destined to be onboard with us during 2020.

What can we say about George? He is a people's favorite and his speed on the track is mind-blowing. We were looking for a new elite rider to represent us and it’s thanks for Wyn Masters for putting the word out to our manager that he might be available. George tested the Bike in the States after World Cup finals and immediately looked comfortable. Being a former podium contender followed by a couple of seasons plagued with injury, we are excited to help George back to the top 10 where we feel he belongs.

Here is a short video of George's first day on the Propain Rage, just to whet your appetite for what's in store… 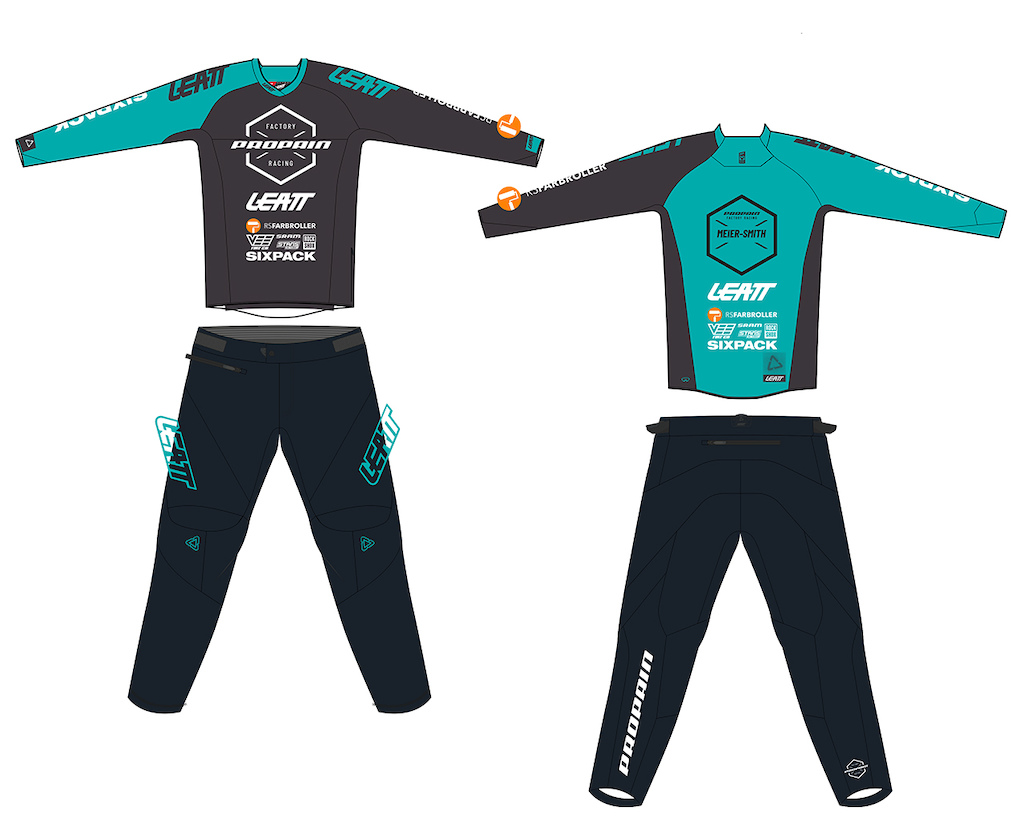 The 2020 team kit is provided by Leatt.
Propain would like to take this opportunity to thank our sponsors who we could not go racing without:

Mavic101 (Jan 8, 2020 at 3:54)
Congrats to Luke Meier-Smith for getting signed on to a factory squad. I bumped into Luke wearing his national jersey while he was spectating the elite men’s race at Snowshoe (after his 2nd place junior finish). He was stoked and it was cool to be able to high five him and say “Nice work!”

Hogfly (Jan 8, 2020 at 10:58)
I really hope George has a great season. In the GMBN "recap" of the decade, they put his name in the hate for rider with the worst luck. I'd have to agree. He's got such potential and has just been plagued with the injury bug. Hoping for a clean streak for him to see him reach his potential.

optimumnotmaximum (Jan 8, 2020 at 1:48)
I fear the propain team will fail again. They switch their top riders all the time and most of them suggest afterwards that the equipment was not the best (see Trummer on a German mtb website). Brannigan is agreat rider but is often hurt and therefor inconsistent -gonna be difficult.

Behindthetapeproductions (Jan 8, 2020 at 1:59)
I think George is there mostly to help the younger boys on the team, a good move I think!

funny lets see how many downvotes i can get for stating facts. dont get me wrong, i wish them the best and really like the look of the rage, cant see it happenning though.

ziles (Jan 8, 2020 at 2:11)
@optimumnotmaximum: You are not getting downvotes for stating facts, just general negativity.

TransforDerek (Jan 8, 2020 at 2:15)
@optimumnotmaximum: Well he doesn't exactly state that it's bad, but rather that he didn't get along with it no ?

Chilliwacker (Jan 8, 2020 at 2:15)
Have you inferred the equipment is not the best or has Google Translate missed out that bit?
He said there were internal changes at Propain and he couldn't carry on there.

Your implication is people are leaving Propain because the stuff they use isn't good enough. That doesn't seem accurate.

TransforDerek (Jan 8, 2020 at 2:21)
@Chilliwacker: True, he left because of team changes and not because of their equipment, hence my assumption that he just didn't get along with it and that he didn't leave because of it

Right. Maybe @optimumnotmaximum mean the comments below the article.

optimumnotmaximum (Jan 8, 2020 at 3:21)
@Chilliwacker: there are multiple hints in the interview that indicate that the team was suboptimal and he did not like the bike/frame /geometry. he said that in a midpack team (which in my opinion propain is) there are too many things he does not like and he wanted either to ride in a top team (which he did not have the results for back then) or just ride a bike he likes.

I also said that the amount of fluctuation happening in the propain team is not a good sign - the interview also backs this. I did not want to implicate, that people are leaving propain because their stuff is not good enough. For me it sounds like the team just does not get riders, staff and equipment working properly together and they dont take their time building a consistant team.

Chilliwacker (Jan 8, 2020 at 9:19)
@optimumnotmaximum: convenient just wanting to ride the bike he 'likes' happened to be the one he is now sponsored to ride and promote.
Funny that.

A cynical person may suggest the YT being the bike he just liked to ride , became that after the deal and makes a nice interview comment.

jamisbikesreps (Jan 8, 2020 at 14:17)
Yeah but that’s when they had shitty xfusion suspension that blew up. Now they got dialled gear so shouldn’t be a problem brother

optimumnotmaximum (Jan 9, 2020 at 7:03)
@Chilliwacker: According to the Interview he called Erik Irmisch (YT Developmentrider) to ask for a bike because he wanted a Tues. Thats how it started, unless its all a complete lie. Furthermore the locals on his DH trainingtrack (Schöckl) reported that he was faster on the YT off the bat. Which of course does not mean that the propain is a bad bike, could well be the effect he got to ride the bike he wanted and was superstoked.

Balgaroth (Jan 8, 2020 at 4:58)
Performance wise maybe, budget wise probably not as I doubt they were giving them much.

nlibot33 (Jan 8, 2020 at 5:55)
I wish George a great season I was watching him and Dakota Norton and they seem to be climbing up pretty good in the standings

Wheelersmtbholidays (Jan 8, 2020 at 1:43)
Look forward to riding with them here in lousa in February. Great signings for Ben and propain