Getting to Know Cody Kelley

CODY KELLEY
If you think about all of the great riders who have made their mark on the sport over the years, they've all had their signature style. Something unique that made them stand out from the crowd and we're not talking about results here, as they only tell us so much. From those with the loud personalities to others who always seemed to have the nicest bikes and the craziest custom paint jobs on their helmets. But for others, what made them stand out was their effortless ability to combine both speed and style and deliver it a way that dropped jaws and stoked the fire of anyone who loves to ride bikes. From his long hair to an unmistaken ability to make his bike float and dance over whatever is put before him, you can spot Cody Kelley from a mile away. In only a short space of time, he's risen from an up-and-coming DH racer to web edit star and now with the world at his feet, and on a factory race team, he's about to embark on a year racing the Enduro World Series. Mark our words, Cody is a rider we'll all be seeing more of in the near future... 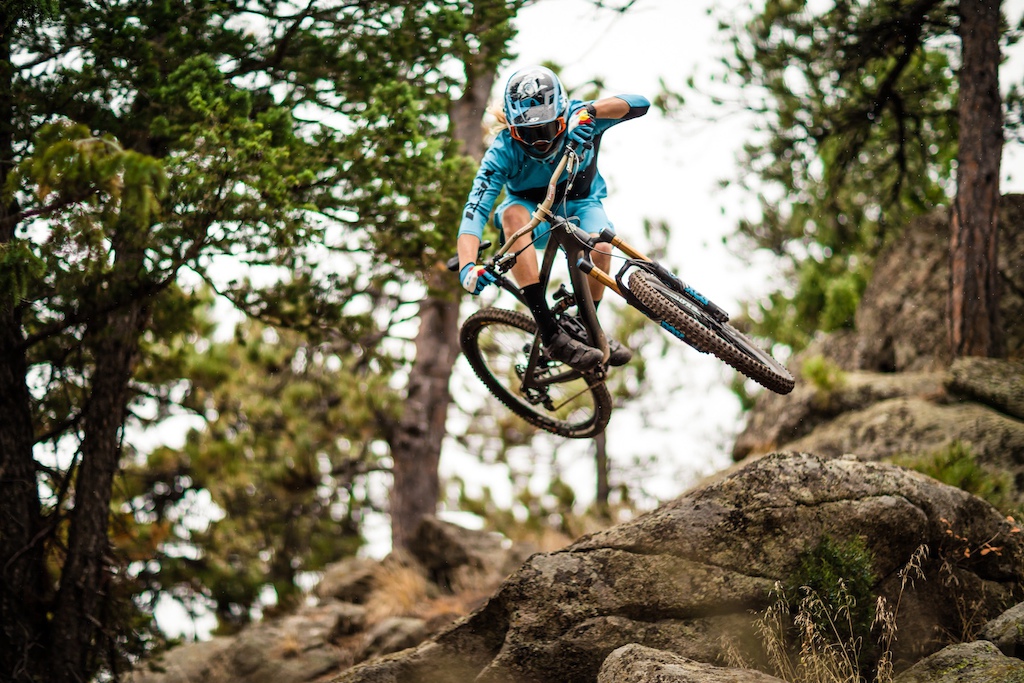 Who is Cody Kelley?

Just a kid chasing his dreams of racing bikes for a living… Ha, knowing where it all began, it’s pretty surreal to be where we are now. Still got plenty of steps on the ladder to climb yet though.

Born and raised in Salt Lake City, Utah, USA… Honestly not a bad spot with a solid riding community and loads of trails to get out and ride on. I've never been a huge fan of the snow though so my winters consist of a fair bit of traveling. On a sicko trip to New Zealand and Australia at the moment!

Just teamed up with Yeti/Fox to be a part of their World Enduro Team. Stoked for the opportunity and looking forward to shredding some trails with the one-and-only Richie Rude. Team sponsors are: Shimano, Maxxis, DT Swiss, Giro, Renthal, Chris King, Ion, Honey Stinger, One Up, Stages, Feedback, Pedro’s, Victory Circle Graphics, as well as my personal addition of Oakley and Stance Socks

In the mountains ripping trails with some good dudes. I really enjoy racing no doubt, but it’s hard to beat an adventure with friends filled with laughs, wild moments, beers, or whatever else the day may throw at you.

What’s been your favorite race/contest venue?

Sea Otter, without a doubt. Slalom is one of my favorite disciplines of racing and they have one of the best courses out there. The berms are massive and the straights are rad. It’s just an all around good time. Hard to beat laps on the DH track with all the guys as well… Fast and loose!

Where are your favorite trails?

That’s a tough one. I feel like I’ve yet to find my favorite trail system. There are so many places out there that look better than the last, but if I had to choose one place it would have to be Whistler so far. You can put in some flowy park laps and then take a lunch and ride some tech in the afternoon or anything in between really. It’s a hard place to beat...

I feel like one of my biggest strengths is bike control. 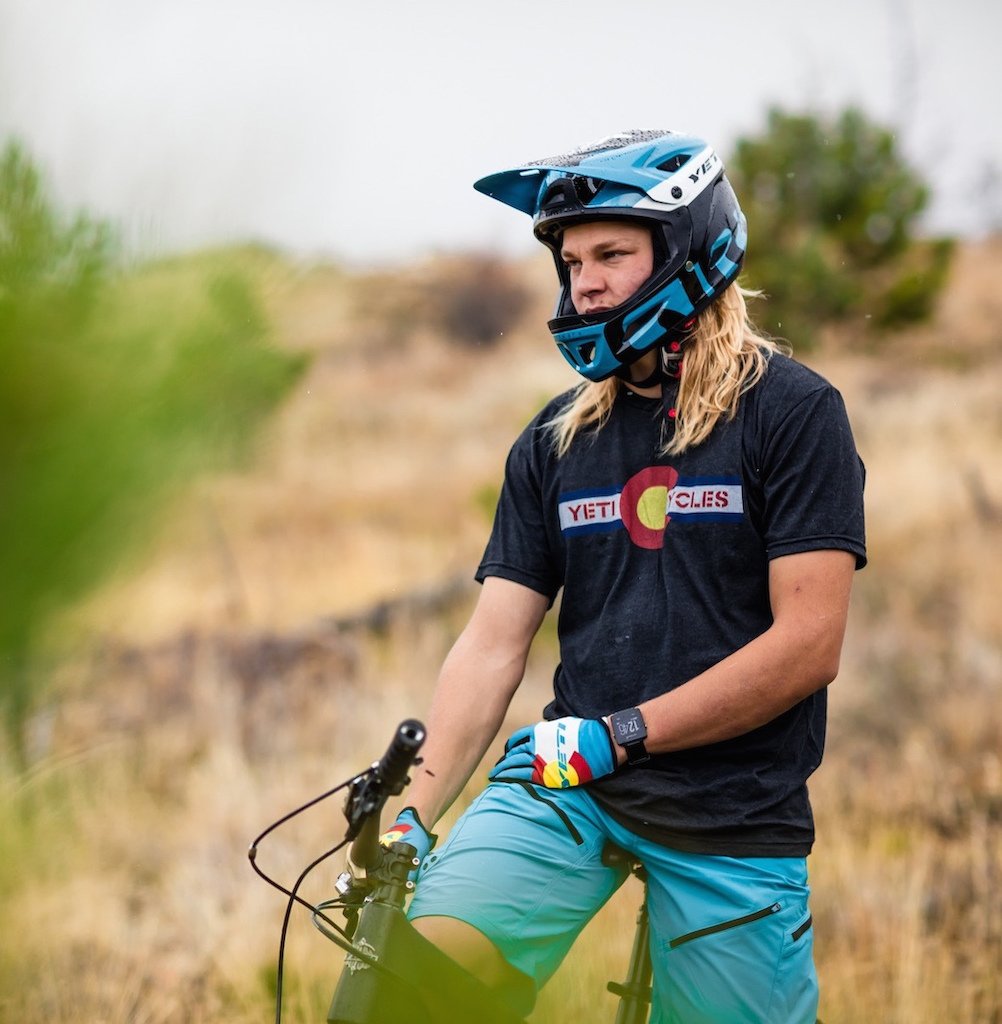 It’s been one of the biggest focuses my entire life and I feel like it’s started to pay off as of late. Always room to grow though, so I’ll keep pushing that as well as all aspects of my riding and racing.

Hmm, I feel like I have a few areas to my riding and racing that struggle a bit. Been putting my head down lately and trying to clean up everything. I guess time will tell if my work will pay off or not... 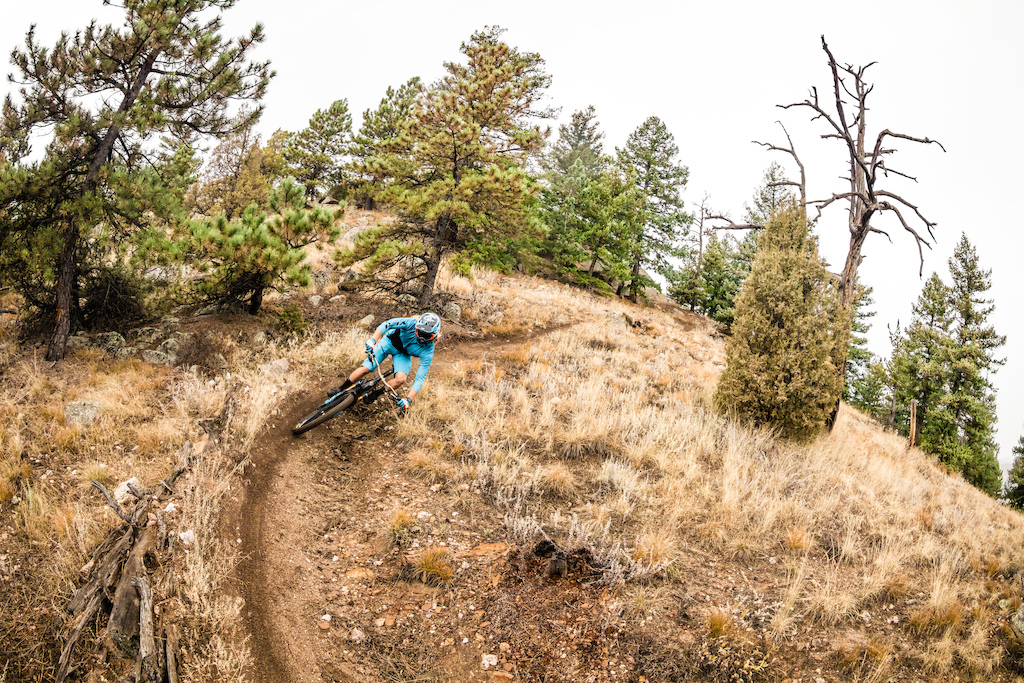 I had a massive off a few winters ago while riding in SoCal with Bubba Warren. I came out of it with nothing but a sore neck, but it was a scary moment for sure. Basically, we were guinea pigging a 55-60 foot fader that we had built. I got a bit too far forward on the lip and it sent me in a nose heavy dead sailor. You can imagine the rest… It ended with a broken helmet and my neck brace being snapped into three pieces!

Man, there has been so many wild moments over the years, it’s hard to choose just one… I popped outta my clips over a decent sized jump in Keystone, Colorado. That was a bit wild for sure, side-saddled on the bike doing about 35-40mph on pretty roughed up trail. Was lucky enough to get back on it just in time for a rock garden, ha-ha.

I had a Stumpjumper Evo 29 that I rode for almost two full seasons. That thing had so many miles on it, it was crazy! I retired the DH bike right around that time so it was basically my everything bike at the time. Competed in a few downhill and enduro races and even a slalom race. Tons of podiums and good results on that machine too... Good times were had for sure!

I’ve been spending a good amount of time aboard my Yeti SB6C… The thing just rips the descents and hits the climbs better than any bike I’ve ever been on with the same amount of travel. Got an SB5C and an SB4.5C on deck as well. 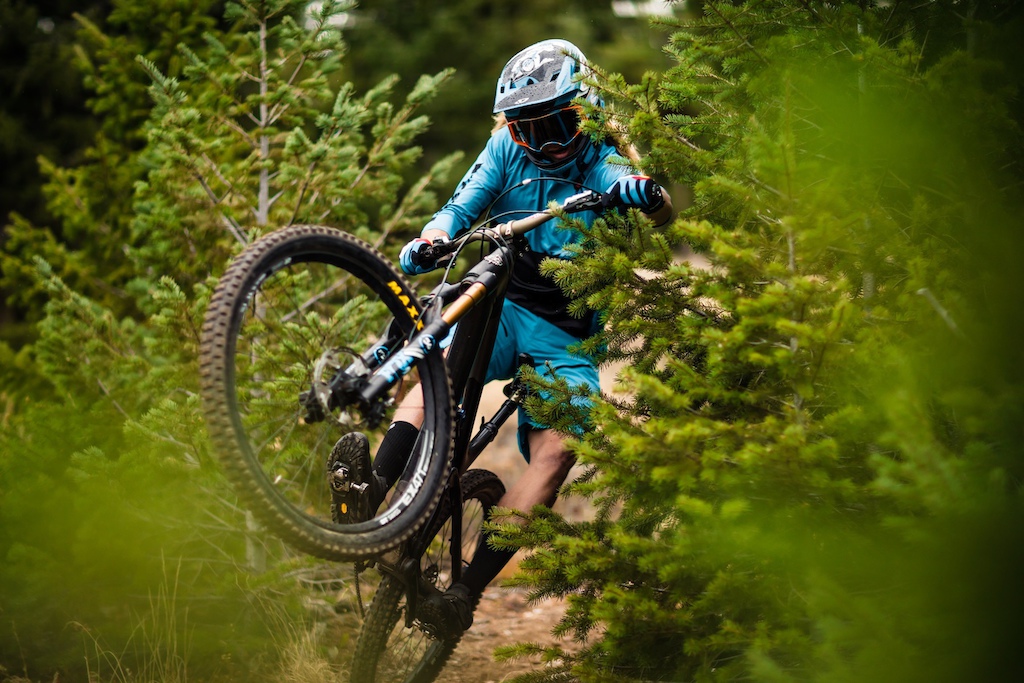 Hard to pinpoint one rider isn’t it? It’s rad to watch Minnaar just make everything look so smooth and clean, but it’s also sick to watch (Sam) Hill get loose and have a whole different outlook on the course. I guess I appreciate the variety of it more than just one single rider. I have massive amounts of respect for riders that have dominated multiple disciplines like Graves and Anne Caroline Chausson; that takes a special athlete.

I play some basketball here and there, but I'm not any good, by any means… But I mainly like being outdoors! I do a bit of fishing, some camping, swimming and such.

Actually, I'm not listening to anything surprisingly. Limited data in a foreign country equals no music streaming. Ol Rude Boy and myself are watching some Family Guy though.

Seinfeld for sure! The best TV show out there, hands down. 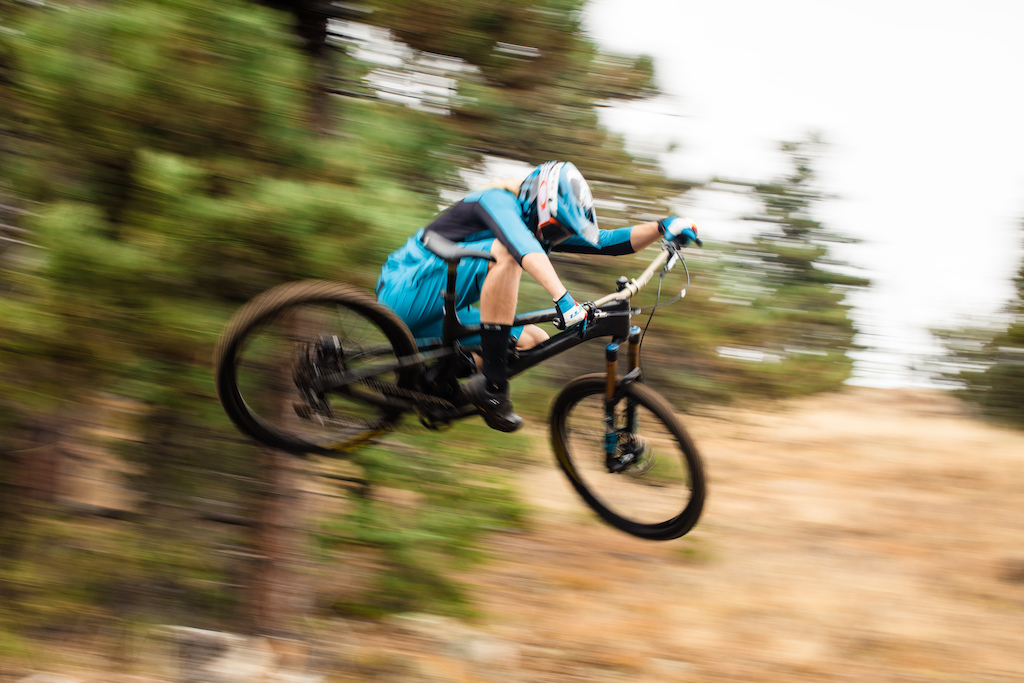 Do moto sites count? I spend my fair share of time on the vurbmoto site…

"Hold it wide and let it slide!

I try to keep a positive outlook on everything in life. I don’t like to spend too much time down in the dumps. 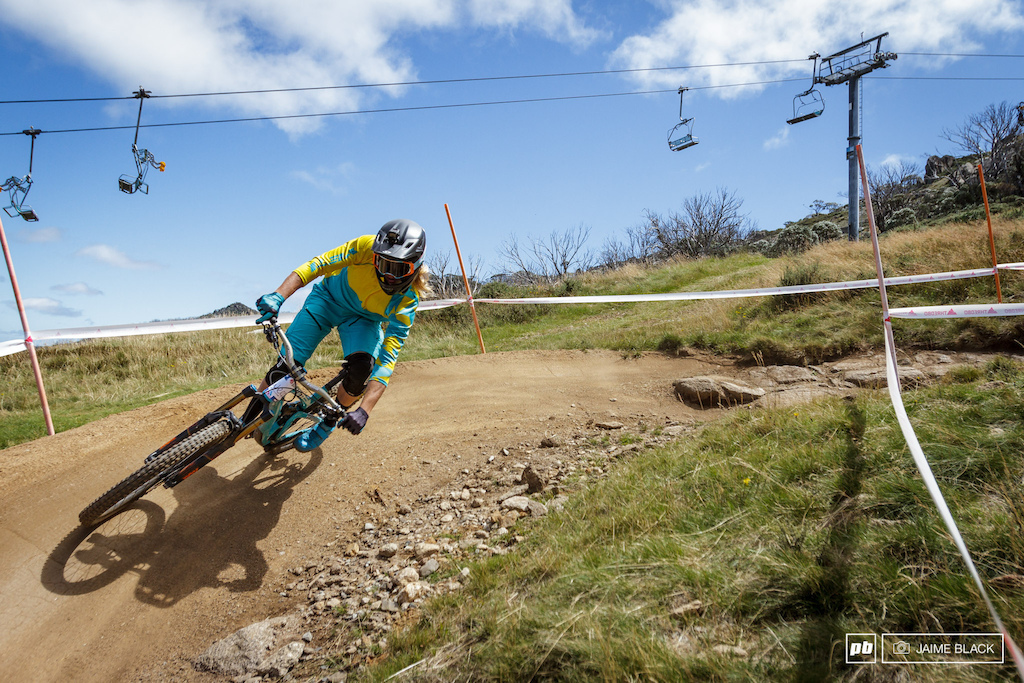 Never really thought about it too much. When I started racing BMX as a grom I always knew this is what I wanted to do. I guess I’d probably be doing a hands-on job somewhere. Definitely wouldn’t be in an office!

Hmm, I’m not sure. With how fast cycling as a whole is growing it’s hard to say what needs to be done to make improvements… Because one minor tweak could send us in a back spin or vice versa. I will say that I feel like athletes in gravity fed racing are underpaid. That’s one thing that should change for sure.

When you hang up your racing shoes, how do you want to be remembered?

I want to try and inspire people. I’m all about good health and good living so what better way to do that than ride bikes? So when the ol' racing boots go on the shelf for the last time I want people to be able to look at my career or videos or whatever else there may be, and inspire them to get out and ride bikes!

What does the future hold for Cody Kelley?

You can plan on plenty more video projects and racing. I truly like to shoot videos and see all the feedback from the viewers. As far as my racing goes, I’m doing everything in my power to get out there and have some good runs this year on the EWS Circuit.


Posted In:
Interviews Getting To Know Cody Kelley

GiacomoSilvestri1 (Feb 20, 2016 at 3:44)
With that helmet and that long blonde hair ithought it was Kelly... #longlivemcgazza

Trudeez (Feb 20, 2016 at 1:43)
Cheers to Cody, great to finally see you ripping wheelies and destroying trails. Couldn't really see what was going on last year, what with all that camo. . .

UtahBikeMike (Feb 21, 2016 at 19:31)
Yep, I rode that race at the canyons and chatted with his dad, no idea who he was. His dad is fast and it made me feel stupid when I'd see how fast they were. Makes me feel better knowing they're pro. I just chatted with his dad today again at corner canyon. Super nice and very humble guy.

alexsalter (Feb 20, 2016 at 6:26)
All the young dudes coming in to the pro ranks seem really cool. I think the future of the sport is definitely very bright with people like Cody!

digitalsoul (Feb 20, 2016 at 16:15)
I remember riding at the Canyons one weekend two years ago. Some riders were filming there and were pretty low key about themselves. It wasn't until a few weeks later that I saw the video of them riding on this site and found out one of the riders was Cody Kelley. While I never talked to him, he acted like a normal rider and wasn't there trying to feed his ego or seeking a lot of attention based on who he was. Best of luck to him.

MTBCAM (Feb 22, 2016 at 14:31)
@digitalsoul Same thing at Sundance last couple years (although he didnt race last year), he seemed like just another rider in the crowd, chill dude. Good to have a local getting a lot of attention.

tlilly (Feb 20, 2016 at 9:20)
This dude has quickly become my favorite rider to watch. His bike handling is just uncanny. It really is art in motion.

Motivated (Feb 20, 2016 at 10:06)
Yeti always pick top prospects, so I'm sure this guy is gonna rip. I do wonder about his fitness since he never mentioned any kind of training program.

OriginalDonk (Feb 20, 2016 at 15:36)
Seems like a really positive guy. Maybe fitness is one of his "weaknesses" that he's working on addressing. Keen to see him throw down the complete package this year and post some solid results.

dualsuspensiondave (Feb 21, 2016 at 6:21)
Although the training programs help with quick burst strength, most of the fitness comes from riding. This guy rides with Rude, there is no questions regarding fitness.

Drop a like if you're feeling friendly. Cheers Guys

cliff-huckstable (Feb 20, 2016 at 17:04)
Hahaha, #poser giving a professional mtb racer fashion tips.
It's not like he had knee pads over jeans and New Balance kicks.
Below threshold threads are hidden