EMILY HORRIDGE
Emily is like so many of us in the sport, the moment she found it she was hooked and hasn't looked back since. Riding from an early age, she got her first bike and would head into the woods with the boys. From there, she went on to race, most notably on the Downhill World Cup circuit and around the UK before finding herself guiding people in Morzine and Les Arcs. No longer a downhill racer, Emily can often be found at the odd Enduro World Series round. Settling in Les Arcs, Emily is one of the first British women to gain British Cycling's level three mountain bike leader award, and perhaps more impressively, the first British female to complete the new guiding equivalence test successfully, a qualification which means she can legally guide in France, where she's busy setting up her own company. We caught up with her to find out a little more about racing, her job and riding bikes. 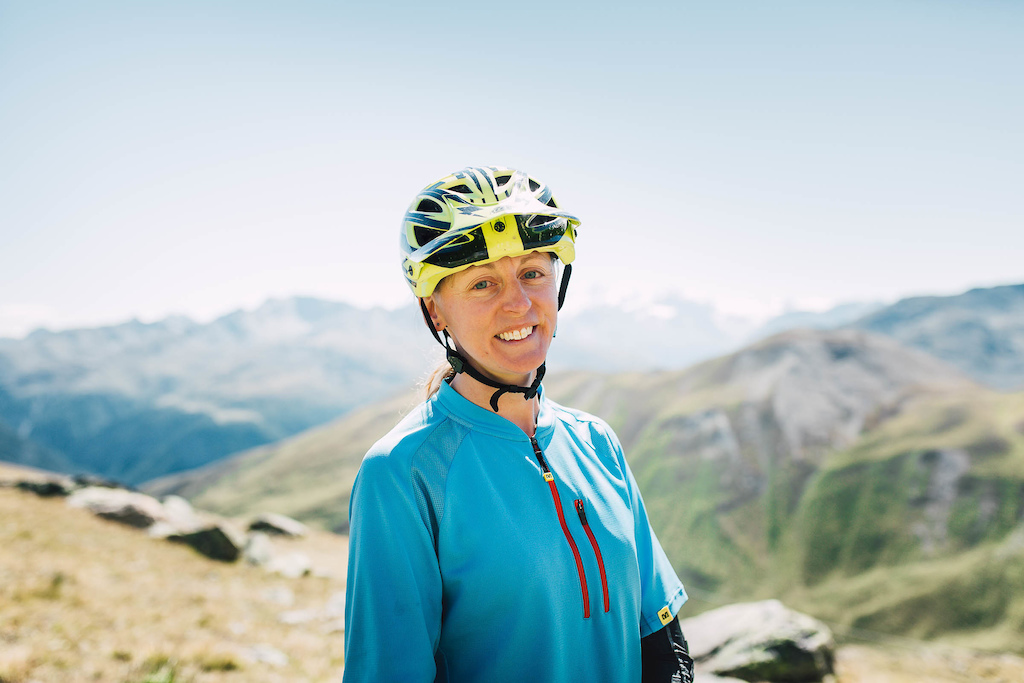 One of the nicest people on two wheels.

Who is Emily Horridge?

I grew up in Street, Somerset, in the South West of England. I now live in Les Arcs, in the French Alps.

I think this is a good time to say a big THANK YOU to Intense Cycles UK for all their help this year!

On my bike of course! 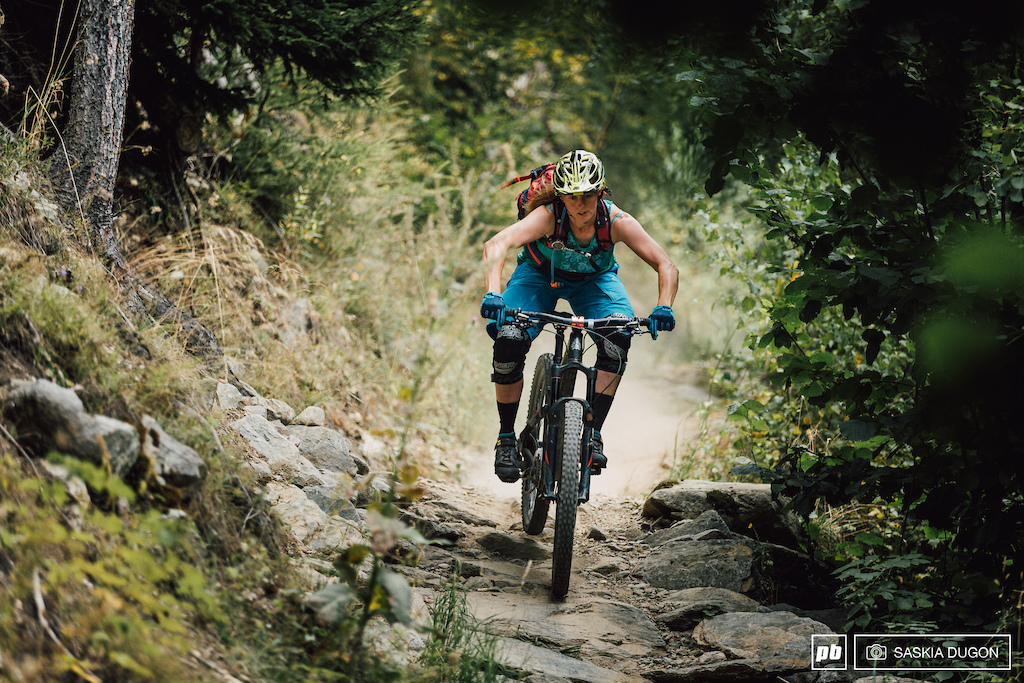 And one of the most skilled on two wheels too.

What’s been your favourite race/contest venue?

Where are your favourite trails?

Finale Ligure trails are hard to beat for pure speed, but for big mountain alpine riding, Les Arcs and the surrounding area is mint.

I'm pretty good at riding on instinct, which works really well for riding blind. Turns out I'm also quite handy at whips on 29ers.

Ice cream in Italy, wine in France, beer in Belgium! 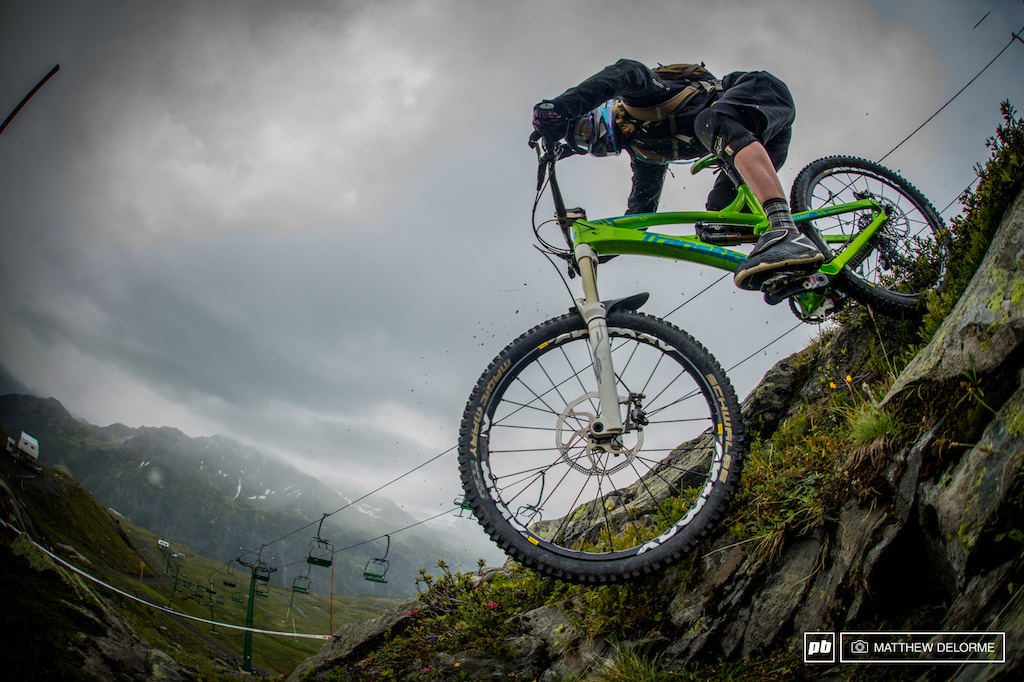 In 2010 a few days before my 30th birthday, I had a massive crash whilst practicing for Innerleithen IXS cup DH race. I ended up enjoying a lovely 10-day holiday in Edinburgh Hospital with a split liver and a lacerated kidney. Fortunately, I made a full recovery without needing any surgery.

Escaping the rat race, for sure. I never wanted to work in an office, but I didn't know how to achieve that.

My Intense M6 which I had in 2010. I had an amazing summer season in Morzine that year, once I'd recovered from the liver injury mentioned above. There was a tight-knit bunch of 5 or 6 of us, all pushing ourselves to ride everything faster and better. Such a great season, mainly for the people, but I definitely loved that bike, and remember some good races on it too.

An Intense Carbine 29er, which is definitely my favourite bike of recent times, it's so fast. Just love it. The M6 was the reason I went back to Intense this year, and I'm so glad I did. I also have a Cube Axial road bike and a Deluxe BMX. 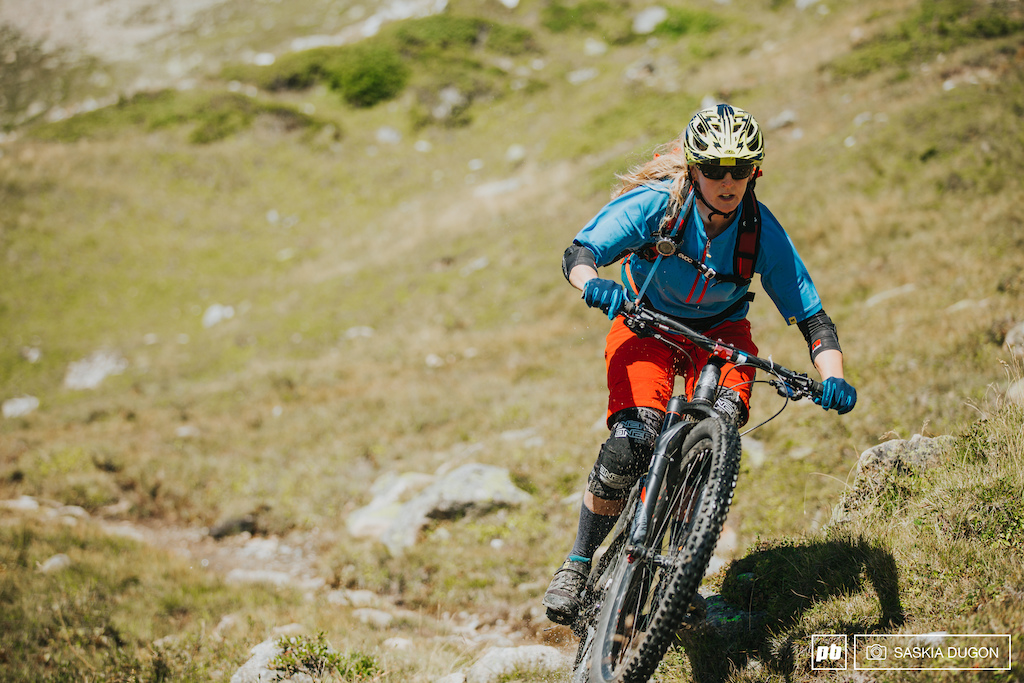 Emily chasing down Anita and Caro Gehrig in St.Moritz.

I have two friends who are so cool to follow, Martin Astley and Sam Hawkins - just skillful fast riders. They're hoppin' and poppin' all over the place and whenever I follow them I just try and copy. So much fun!

There are a few girls on the scene at the moment who I'm finding inspirational. Miranda Miller is one, she just seems to quietly get the job done and smashes out awesome results in both Downhill and Enduro. I'm also enjoying the "behind the scenes" type interviews and videos that Rach Atherton has done lately, as finding out that the 4 times World Champion goes through the same pre-race thought processes as little old me is kinda a bit eye-opening, and proves you can overcome your silly little worries and ignore those niggling thoughts.

Riding with other women is also pretty inspirational. When you ride with guys you just take it for granted that they'll probably be faster or more skillful than you, but when you ride with girls if someone triumphs on a hard bit everyone is stoked for her, and it's inspirational to share that stoke throughout the group. It probably sounds a bit cheesy but I think that is the difference between riding with girls and guys, and it's something I'm only just discovering because I started biking way back when there were probably 3 girls at a race, and none on the trails.

I'm never very far from bikes, but the usual alternative is rock climbing. I love figuring out the puzzle of a hard route and it's refreshing to do something so different from biking.

Music choice is a bit lame right now, whatever Radio Les Arcs is playing! For a French station, it's surprisingly good, but I do need some inspiration (upbeat electronic suggestions welcome!). 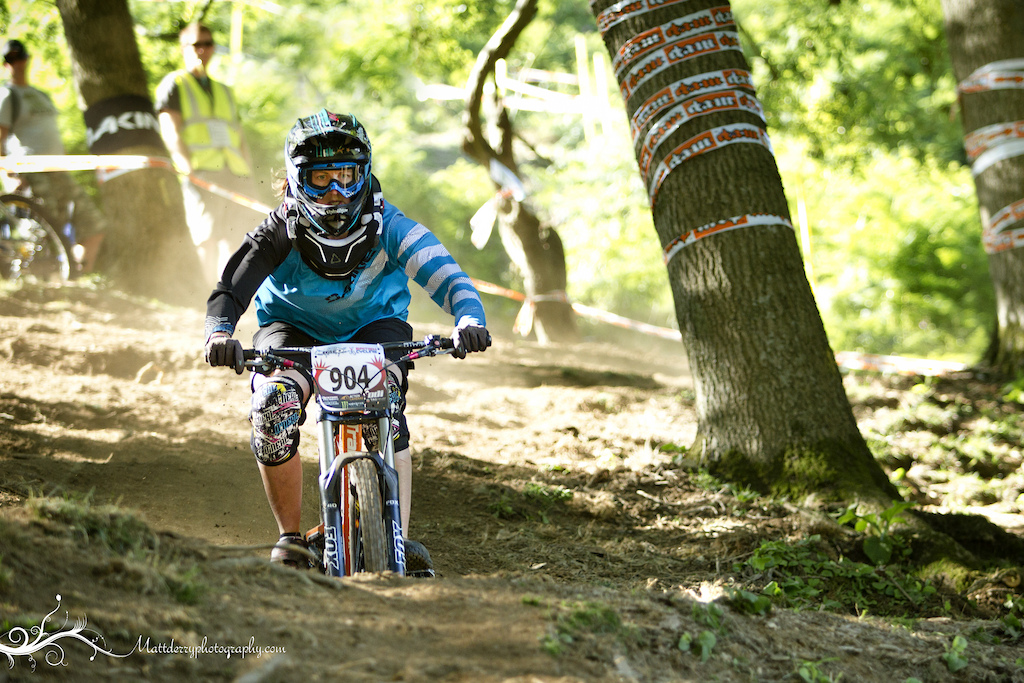 Oh, what an awful view! (when describing some particularly stunning mountain scenery).

People who've stopped in the middle of a trail, see you coming and just stand there watching you approach. How about getting out of the way douchebag?! 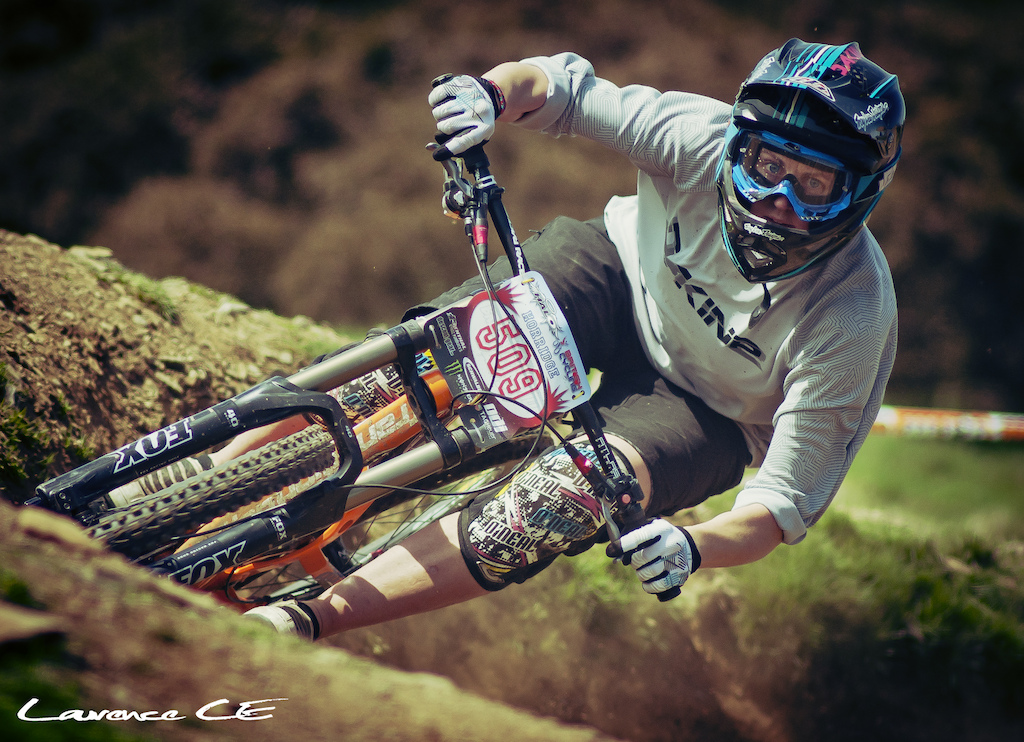 When it turns out that the trail that looked good on the map actually is really good! Or just being out on my bike in the sunshine.

I'd probably be a lawyer, wearing a suit, but I don't think it'd be boring. It'd just be indoors, and I'd be dreaming of being outdoors all the time.

People who skid around every corner on trails where there's no trail maintenance crew would be required to put in a certain number of hours per year of community service trail fixing.

As a fun person to shred sweet trails with. 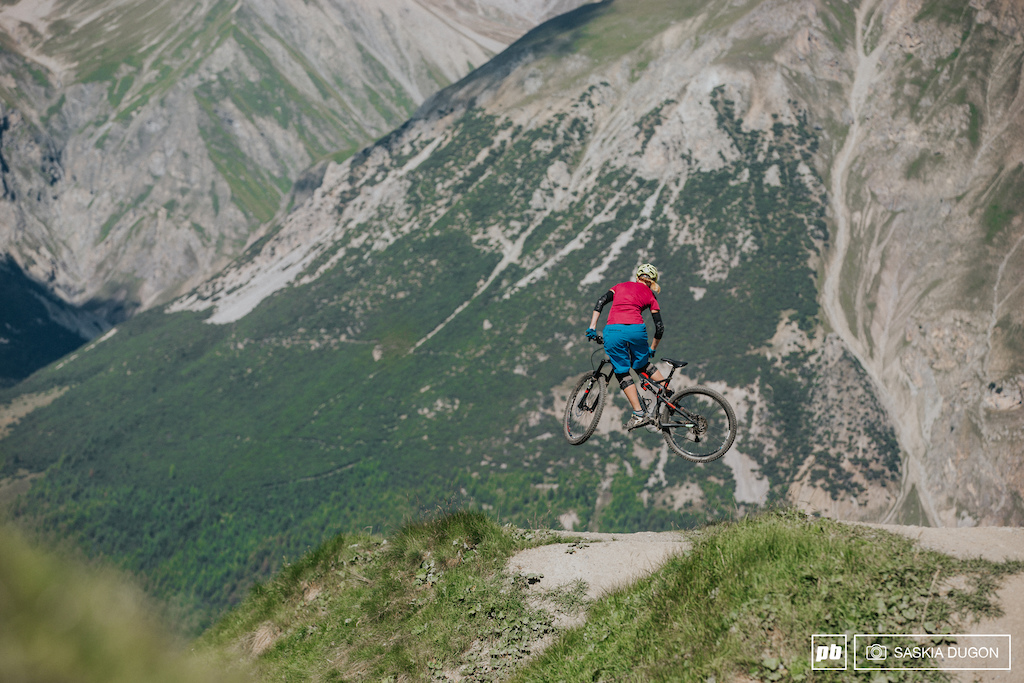 Getting her 29er sideways in Livigno.

What does the future hold for Emily Horridge ?

Guiding people around the best trails in the French Alps - I'm just in the process of setting up a guiding business called The Inside Line. It's early days yet so check out facebook.com/theinsideline.mtb and hit like to keep up-to-date with what's happening.


Posted In:
Interviews Getting To Know Emily Horridge

Lwchin (Dec 3, 2016 at 8:15)
Had the pleasure of having Emily as one of my guides when I went over to ride in southern France a few years back. Great person, with a terrific attitude and skills to pay the bills. Congrats on the success! Hopefully one day we will cross paths again. I just remember how we gave her a rough time about bringing her 29er on the TP traps, boy were we wrong. Cheers, Lonnie

david-kooi (Dec 3, 2016 at 9:44)
"People who skid around every corner on trails where there's no trail maintenance crew would be required to put in a certain number of hours per year of community service trail fixing. "

WAKIdesigns (Dec 3, 2016 at 9:47)
@ - not at all. The striking similarity between mans brain and scrotum is not coincidental

alcooker (Dec 4, 2016 at 1:02)
Emily guided me and some friends around Les arcs and beyond for 2 or 3 days last summer. I could've not had a guide and stayed in my comfort zone all week, but thank god we had Emily to take me well out of my comfort zone and spend the days screaming/laughing, kind of scared to hell but absolutely loving it. 'Err this is a black run isn't it Emily?'
I hold Emily responsible for 2 things-
1. Making me a miles better rider, I just didn't realise it until I rode my usual stuff back in the uk.
2. Me buying a 29er Hightower, every time I thought nah I don't want a big 29er being a shorter guy, I thought well it works bloody well for Emily.

Good luck for the business!

Whackthehack (Dec 3, 2016 at 22:18)
You're weaknesses seem pretty reasonable to me. It looks like you have a great outlook on life!

emilyhorridge (Dec 3, 2016 at 12:36)
Yep, I certainly did. In 2010. I think it's changed a little from how I set it out, and I think it possibly has a jump and berm in the open field lower down (assuming it still goes that way!) that someone else put in, but essentially it was mine. I wanted to build something completely natural and controversially it had a slightly ascending off camber bit in it onto a kind of ridge line. That line got ignored in 2011 so I think it has a completely straight line in it now, which I definitely did not build!! Also someone nicked my new hatchet that I'd left trailside whilst the build was in progress :-( . Enjoyed putting it together though, and I hope people enjoy riding it :-)

mylandmtb (Dec 4, 2016 at 0:25)
@gravitysgirl: fear not, its still one of the best natural trails in the PDS, the top root section along the ridge is fast as hell now also. We have done some work on it over the last 6/7 years.

You should get back over to Morzine on the trail bike, we have some awesome stuff now..

emilyhorridge (Dec 9, 2016 at 2:37)
@cunning-linguist: Ah awesome! Thanks! All these comments about the track is making me want to crack on with another over here in Les Arcs... it'd good project whilst we have no snow!

emilyhorridge (Dec 9, 2016 at 2:42)
Not my words... should really say first british female to take the new equivalence test successfully shouldn't it :-)

laurenjenkins (Dec 9, 2016 at 7:48)
@gravitysgirl: Made a change for you. Either way, congratulations! Can't wait to come out and experience your guiding expertise in person.