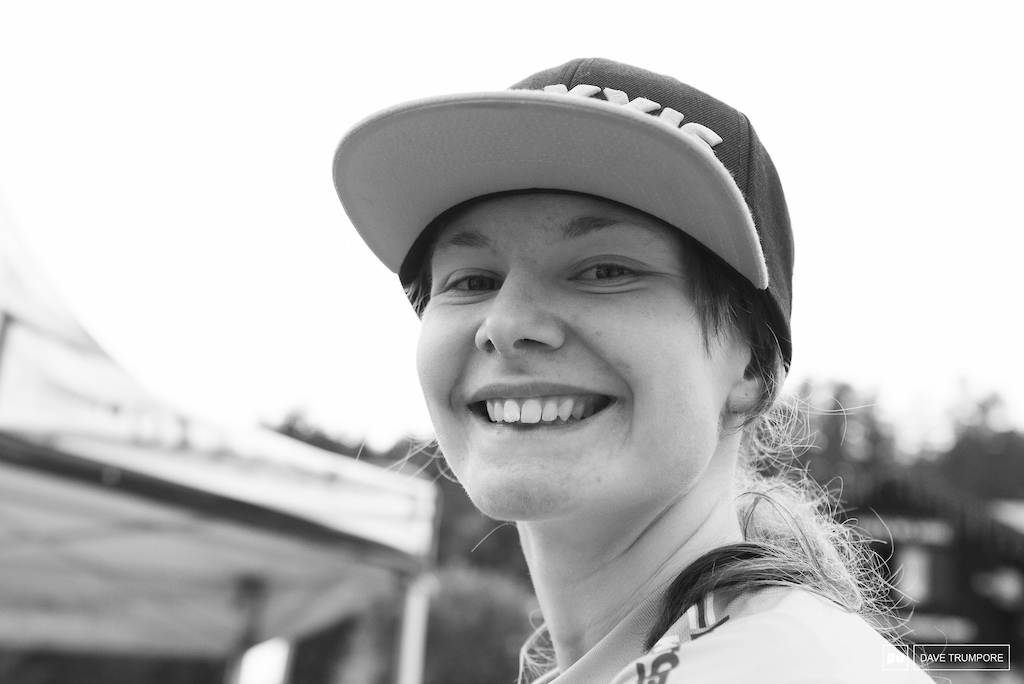 Raphaela Richter
Those paying attention a few years ago will remember Raphaela Richter as the winner of the junior women's Enduro World Series. Now, after a two-year break, she's back in the action and it's like she never went away. In Les Orres, she humbled a field of EWS podium regulars to finish second, just 30 seconds behind Isabeau Courdurier, who is rapidly closing in on a perfect season. She was also the only woman to take stages off Courdurier that weekend, winning two on her way to the podium. Just a month before that, Raphaela also raced her first-ever Elite World Cup too in Leogang and finished an impressive sixth, just over a second off the podium.

Raphaela is a more than worthy winner of Wyn's Privateer of the Week award so we caught up with her to discuss what prompted her to return to racing, how she copes with the struggles of a privateer and what the future holds for the young German. 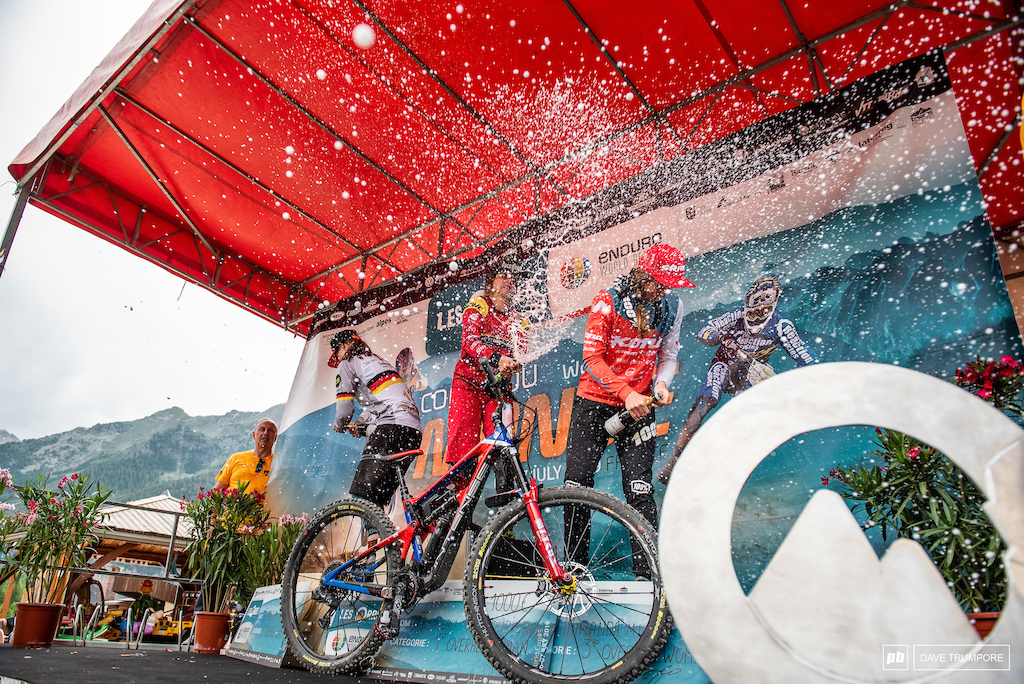 I live in a place called Bayreuth in Franconia (North of Bavaria, Germany). I was born and raised in the area there.

I started XC Racing when I was five because my older brothers did it and I always did what they were up to. 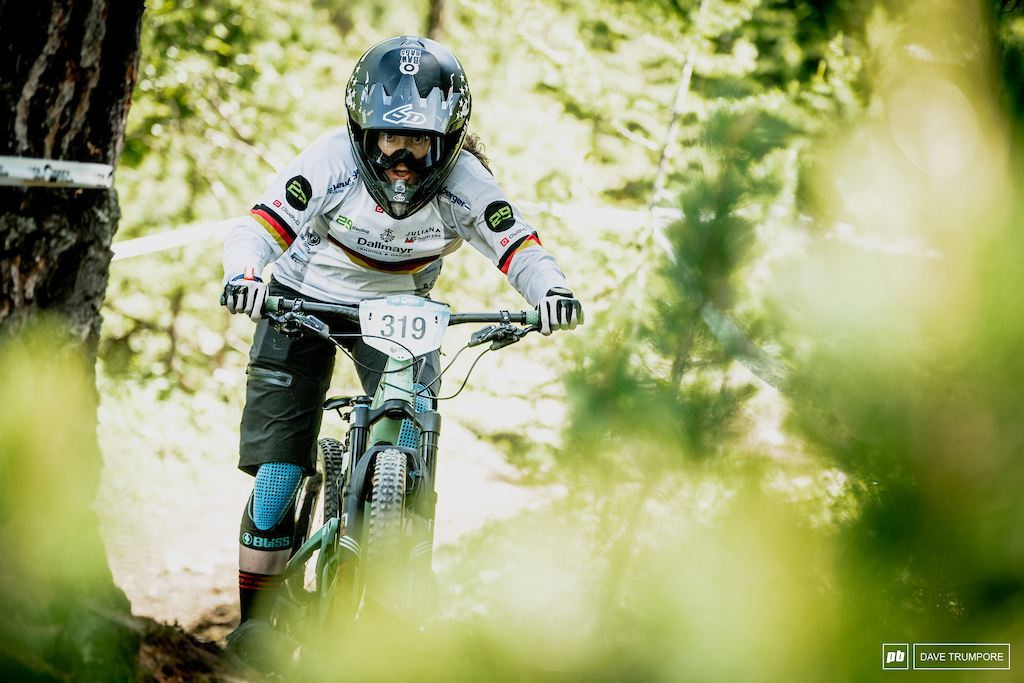 I’m riding for Juliana Bicycles as a free ambassador. I’m also getting a bit of support from 29er Racing Team, it’s a local club that supports Enduro and XC riders. There’s a bike shop (MZ Hoyler Bike) in town that always helps me out with mechanicals. I also do have a few private component sponsors like Dallmayr coffee, Maxxis Tires, Fox, Tire Trooper, Owayo jerseys, 6D helmets and Bawbags underwear.

I’m riding the Juliana Roubion most of the time, the Santa Cruz V10 29er for DH and I’ve just got all the parts together to build up my new Juliana Maverick. That will be the first proper 29er Enduro Bike that I’m going to be able to ride. Really excited about that! 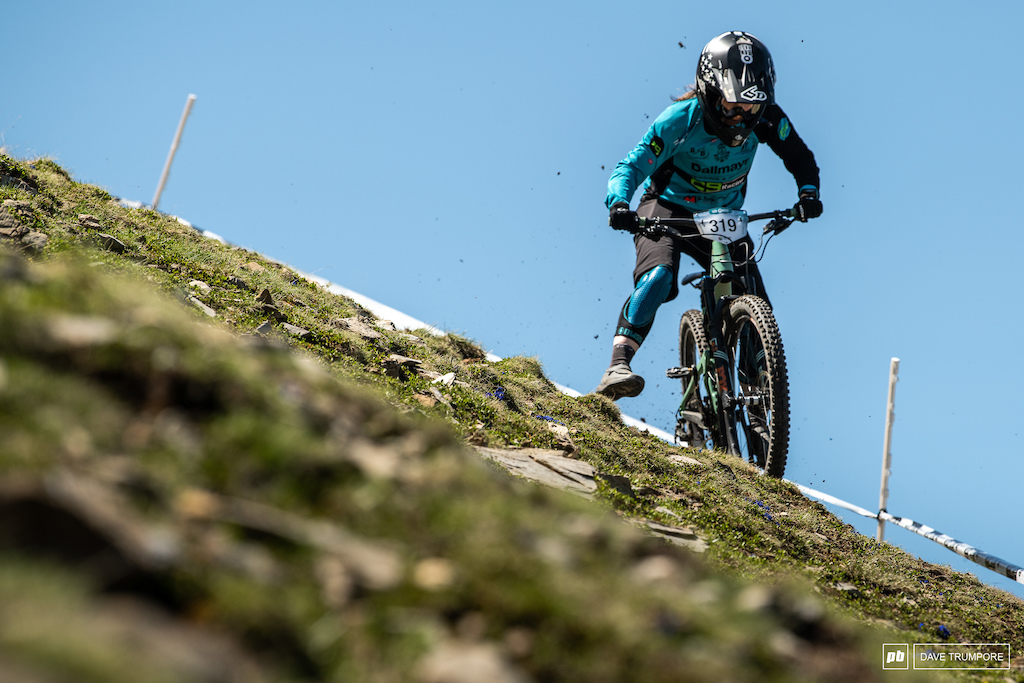 I’m doing vocational training as an optician for one more year in Bayreuth. It’s a 40 hour work week and also includes working on Saturdays sometimes. My bosses at Fischer Optik are pretty cool with my “bike career” and always try their best with clearing up time for me though. It’s not always easy for the medium-sized enterprise but most of the time things work out which I’m really happy about. I can’t complain to be honest!

I think I’m good at finding my lines and doing them clean during a race run. Also, I feel like I’m a pretty consistent and safe rider. I also do like drifting.

I’m not that safe with hitting big jumps. At least that’s what I feel like but on the other hand, maybe it’s just in my mind and I underrate my abilities sometimes. That mental game can be a tough one to play.

Were you a sponsored rider when you were racing in Under 21?

I was sponsored by Radon Bikes for a few years. They gave me everything concerning bikes but I never really had the race support at the venues. There were many people helping me out at the races (my former teammate James Shirley, and of course my brothers – just to name a few) but I never really stood to benefit from team pits with mechanics at the EWS races. 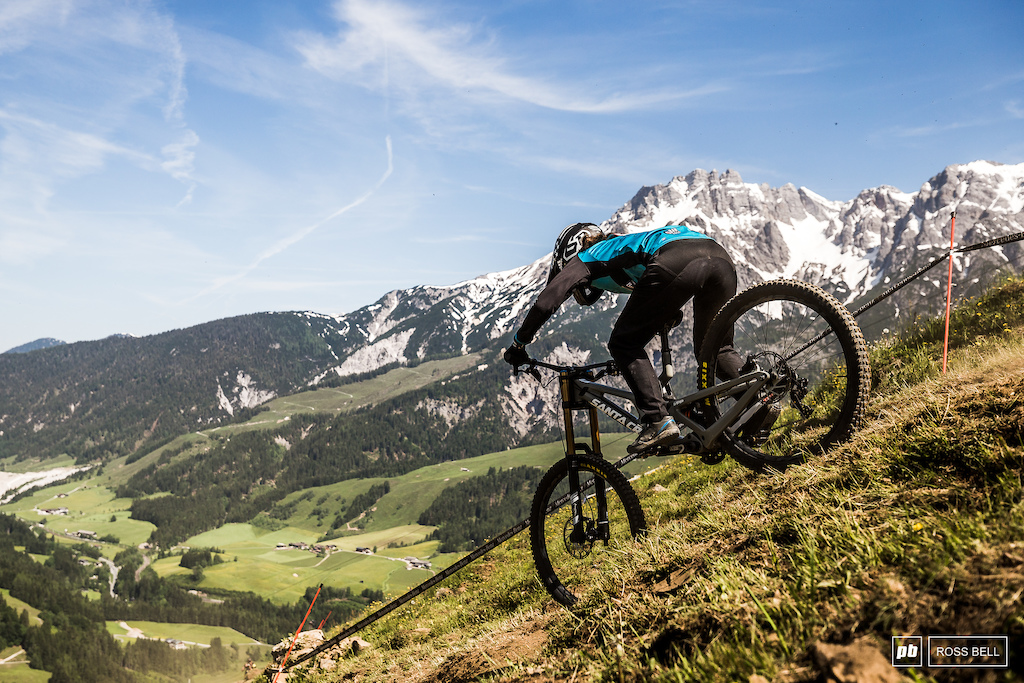 I just wasn’t fit enough. I didn’t see the point in professional training during that time and wanted to spend more time with my non-biking friends. That was pretty cool and helped me to develop and to find out what I want to achieve in life. Also, I had to make a decision concerning a “real life job” that I could do if a biking career wasn’t going to happen. But thank god I found out that racing is pretty fun as well and that with my biking abilities there’s hopefully an exciting future waiting for me that not many people are privileged to experience.

What made you come back to racing in Les Orres?

After two years of absence, the old motivation and one year being back into a proper training program with Cycletraining, I felt well prepared for an attempt to compete at an EWS race. I picked that venue because I wanted to stay in Europe (means fewer days off work).

How did it feel winning stages and challenging Isabeau on your return?

On the first race day, I didn’t check any stage times or the live feed on track. I had already finished stage 4 when Ines Thoma congratulated me on her way to the last stage. That was the moment I realized that I was probably in the game for a podium spot. When I saw the times I was just so stoked. I’m still buzzing whenever I think about that! On the second day, I didn’t want to put too much pressure on myself and have a clean day. Mentally that was a bit tough because off course I wanted to win more stages. Anyway, in the end, it worked out pretty well. 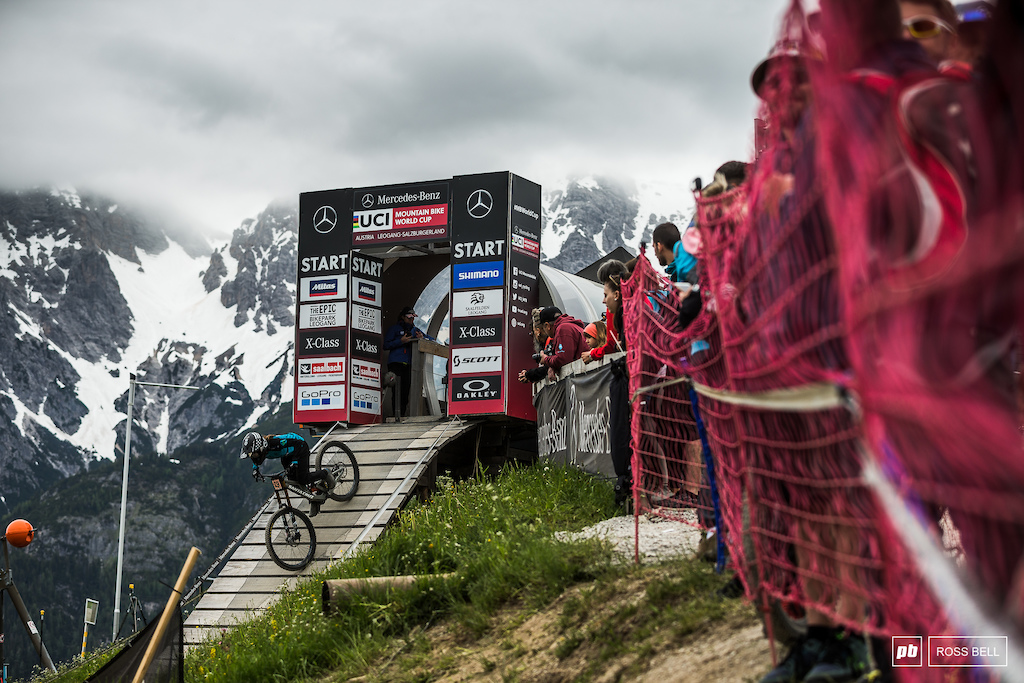 What made you decide to race your first downhill World Cup as well this year?

I decided to compete at different disciplines to find out what I like more and on what discipline I’d like to concentrate on in the following seasons. I think as an Enduro rider you can profit from downhill racing though. So IF I specialize in enduro racing, I might as well race a few DH World Cups.

What are the struggles of being a privateer that people might not realize?

Even though I do have a few component sponsors at the moment, I have to pay for most of the travel, spare parts and race entries on my own. Also with my normal job, it’s sometimes hard to train the way I want to and even more importantly to rest as much as I want to. The season is only halfway through and I feel that I get more tired from week to week.

In addition to that, I feel like most of the Germans are already looking at me, being the national champion the last four years straight, as a pro and are expecting me to do big races and also to get good results. But as I already mentioned, even when I was a factory rider, it was not like I had the full package of race mechanic, a wage and a manager organizing all the travels. Not that I expected to get any of those things, considering the races I did and how young I was (and still am!). But for sure that kind of support helps a lot, and I was basically self-organized all the time.

I was selected for the DH World Championships in Hafjell as a first-year junior back in 2014, despite not having competed in a DH race ever before. I didn’t really get to ride a lot on the DH-bike before the race. In Hafjell I also didn't get to ride a lot because I crashed more than staying on my bike. I was such a full suspension rookie. The last crash was in the morning on race day. I took some painkillers for breakfast (because of the crashes the days before), rolled out of the start gate, hit the first table, had a strange landing (still on the bike though), hit the second table and landed on my face. The helmet broke, I think I was unconscious for a few seconds and had a concussion and quite a stiff neck for two weeks or so. The cherry on top was that I ripped my pants somehow during that crash, haha. 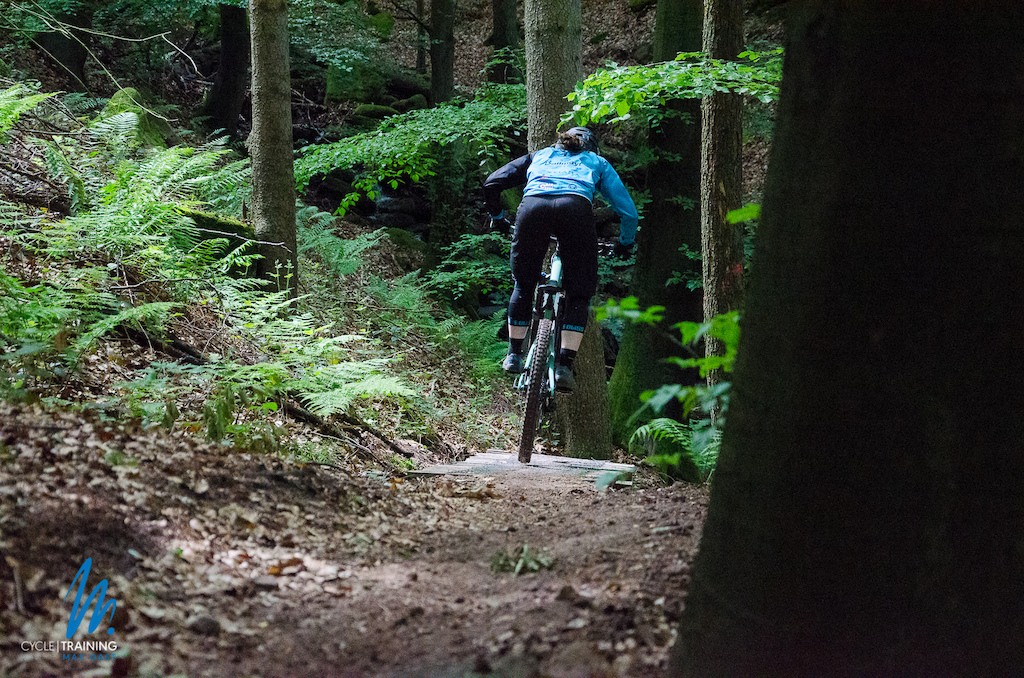 There are a few secret spots at home but I also really enjoy driving to the Czech Republic e.g. Trailpark Klinovec, Spicak or Susice. Those destinations are only about 3 hours away and worth a weekend trip for me.

Being outside makes me happy.

As a friendly and lighthearted person. Just like both of my grandmothers. I don’t want to complain too much about stuff. 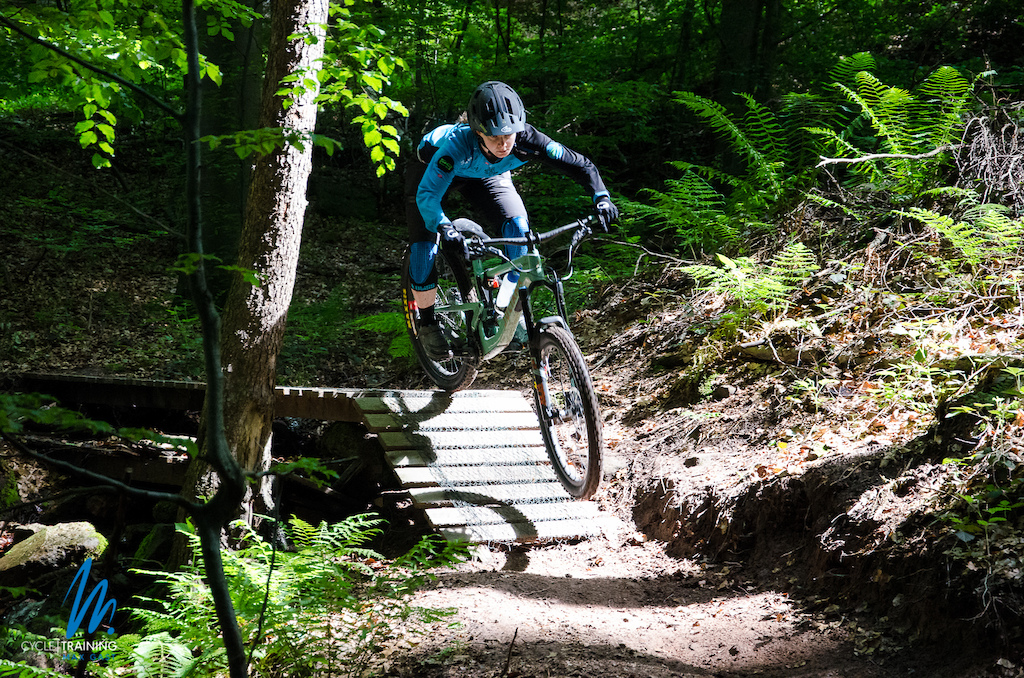 What does the future hold for Raphaela Richter?

First, there’s the vocational training to be passed. Hopefully, later I can concentrate more on a bike career.

funkzander (Aug 1, 2019 at 12:39)
remembering riding with her in 2013 in an enduro one race in spalt near nuremberg. she was winning on a hardtail, i think it was a 2souls quarterhorse or something like that.

zimtsticker (Aug 1, 2019 at 0:35)
A super fast and humble young lady. Incredible to show up at your first EWS in a few years and then finish 2nd.

Rubberelli (Aug 1, 2019 at 9:34)
You are the real deal and a lucrative career awaits you in racing, Raphaela! Factory sponsors take note, she's amongst the fastest in the world and she is very young and therefore will heal quickly if she gets injured.

biketiff (Aug 1, 2019 at 13:59)
Anybody know the fact that she is the German fourcross champion 2019? Great race in Eisenhüttenstadt/Germany!