Getting to Know: Japan's Answer to Fabio Wibmer, Tomomi Nishikubo

Photos: Naoki Morita
Tomomi Nishikubo
Japan hasn't featured much on the mountain bike world stage since the Arai Mountain World Cup at the turn of the millennium, but with the Tokyo Olympics due to take place in 12 months time, that won't be the case for long.

One Japanese rider hoping to help increase Japan's presence on the sport is Tomomi Nishikubo. Inspired by watching his idols Fabio Wibmer and Danny MacAskill, the former Japanese trials champion has moved onto shooting narrative-led street trials videos full time. His videos have begun picking up traction and his latest big project, Chase Her, is rapidly approaching 3 million views. Now he has joined the same management as his European contemporaries and we don't think it will be long until he's held in the same esteem as them. We caught up with Tomomi to learn more about his route into viral success and what's next on the horizon.

How long have been riding mountain bikes?

I’ve been riding bikes for 16 years. Before riding bikes, I did motocross, starting at the age of five. 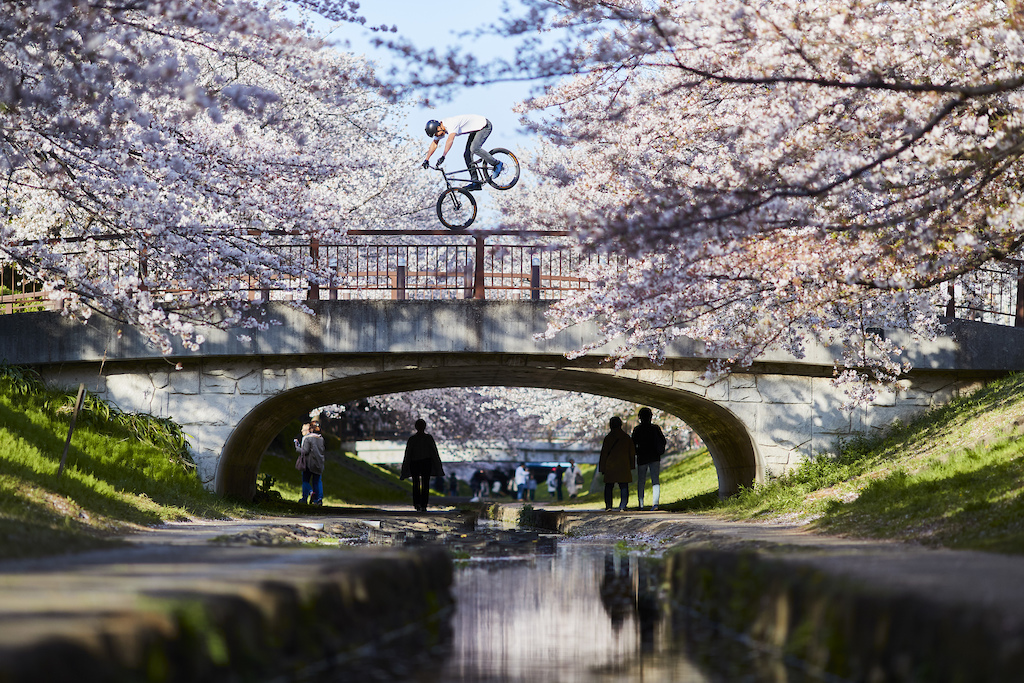 Did you start by riding trials or were you riding traditional mountain bikes first?

I started riding on a cheap MTB, like a Walmart bike. But I broke it in no time, so my father bought me a pure trials bike called “KOXX” when I was 12 years old.

What inspired you to start filming videos? 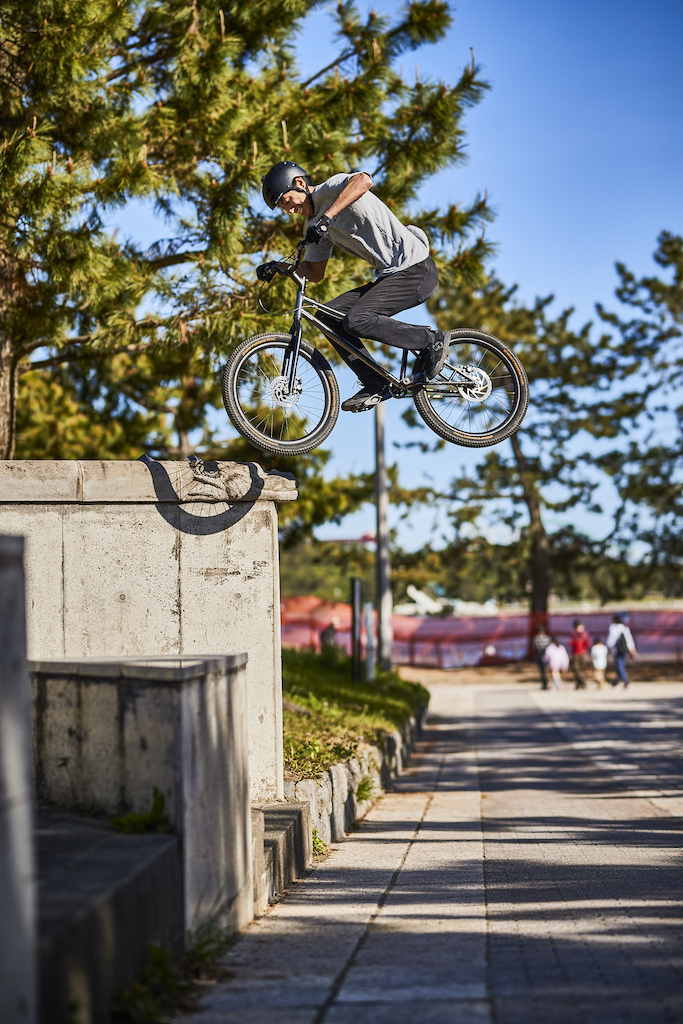 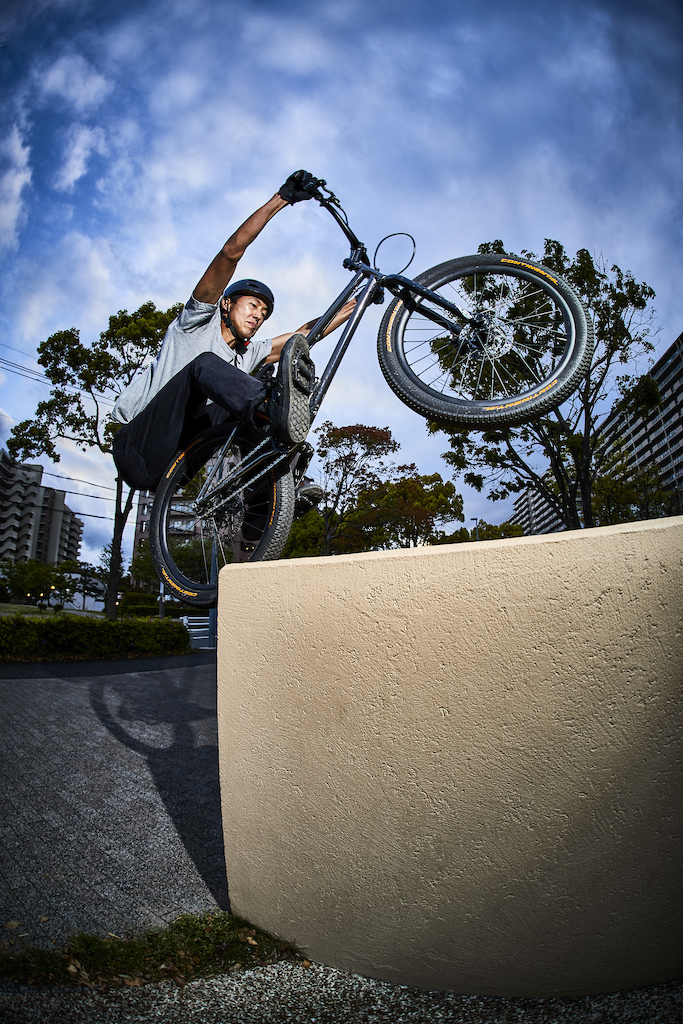 What is the mountain bike scene like in Japan?

I think there are so many good potential spots for mountain biking in Japan. But in fact, there are very few Japanese people who enjoy MTB. So if we can connect MTB with inbound tourism like Chinese or another Asian tourists, MTB will get popular.

How are you splitting your time between competing and making videos now?

Where does the inspiration come from for your videos?

When I make videos, I always decide which tricks I want to do before I start filming. After that, I talk with my friends about the project and decide the location and the story. My friends have always been an inspiration to me. They are a great support. 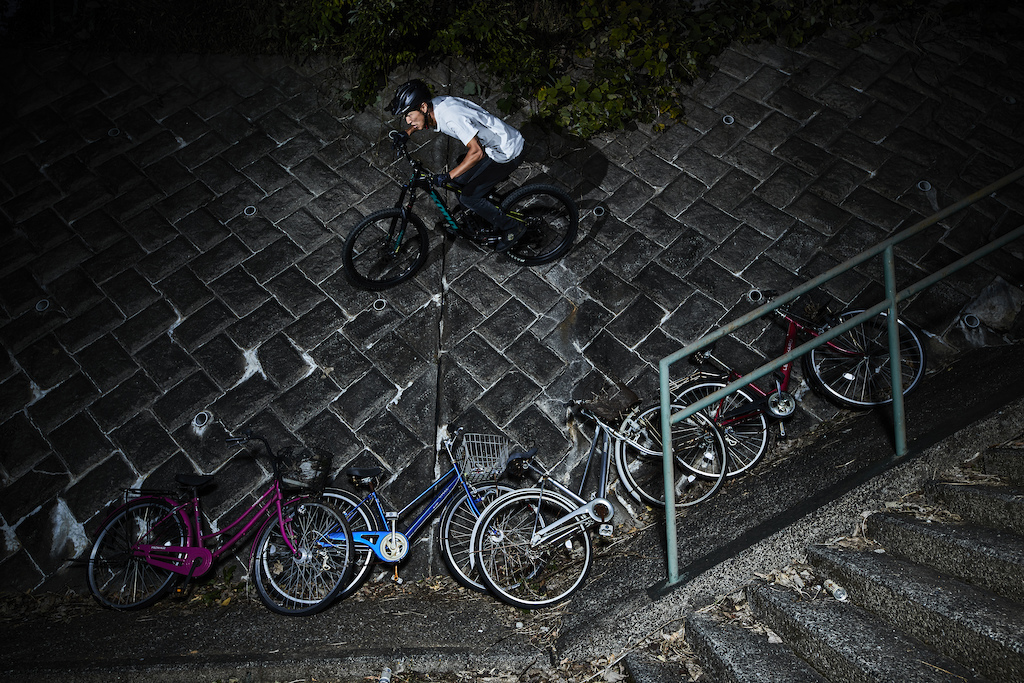 Which of the tricks you’ve done has been the hardest to pull off and why?

My hardest trick is definitely the stoppie front flip on enduro bike from my latest edit Chase Her. As you know, the Kona Process 153 is heavier than my trials bike. I need more speed and power to flip on this beast.

How did it feel when Chase Her started getting lots of views?

It’s always awesome to see comments on YouTube. It always motivates me so much. I want to say thank you to my fans, friends and filmmakers!

What shot from Chase Her would you try again if you had the chance? How would you change it?

I want to try the stoppie front flip again, because it was a little bit of a sketchy landing. I want to make it cleaner. I never want to try a backflip onto the stairs again. Haha 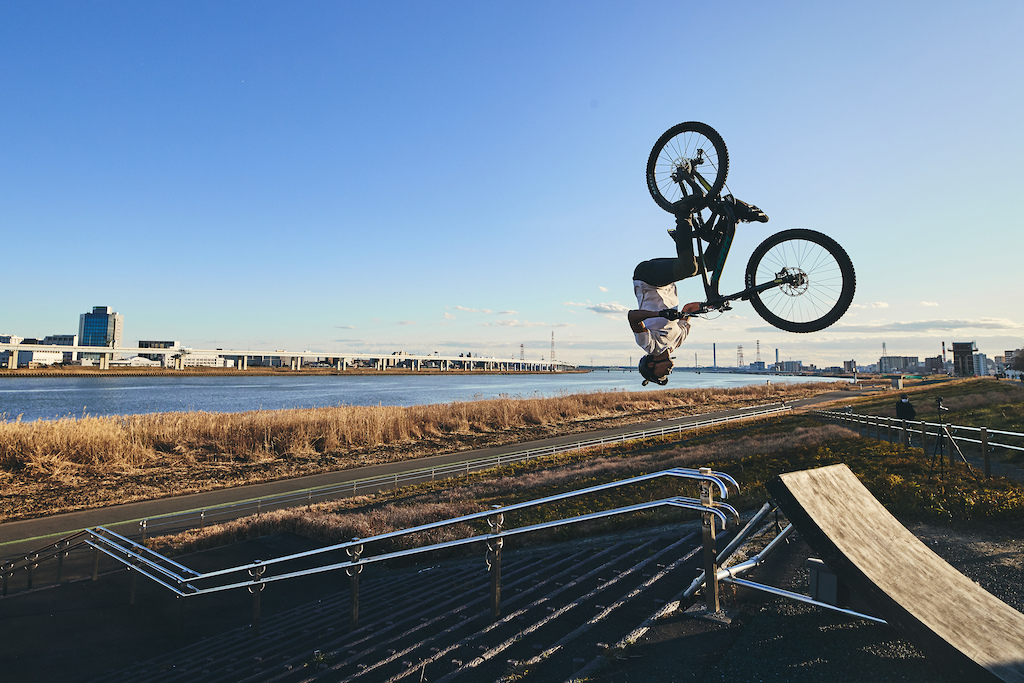 What’s the hardest crash you’ve taken in one of your videos?

The hardest crash in Chase Her was the backflip onto the grass. I got a huge bruise and swelling on my head. It took two months to heal.

How does it feel to be represented by the same management as Danny MacAskill and Fabio Wibmer? Will you be doing any projects with them soon?

I am so stoked! So far, there’s no project planned, but I hope I can do projects with them in the future. First of all, I can’t wait to ride with them!

What else is in your plans for the future?

This year, I plan to make two big videos. At the moment, I’m on the first project. It’s going to be a fun video! Also, I want to make a video around the world in the future. So, stay tuned and stay curious. 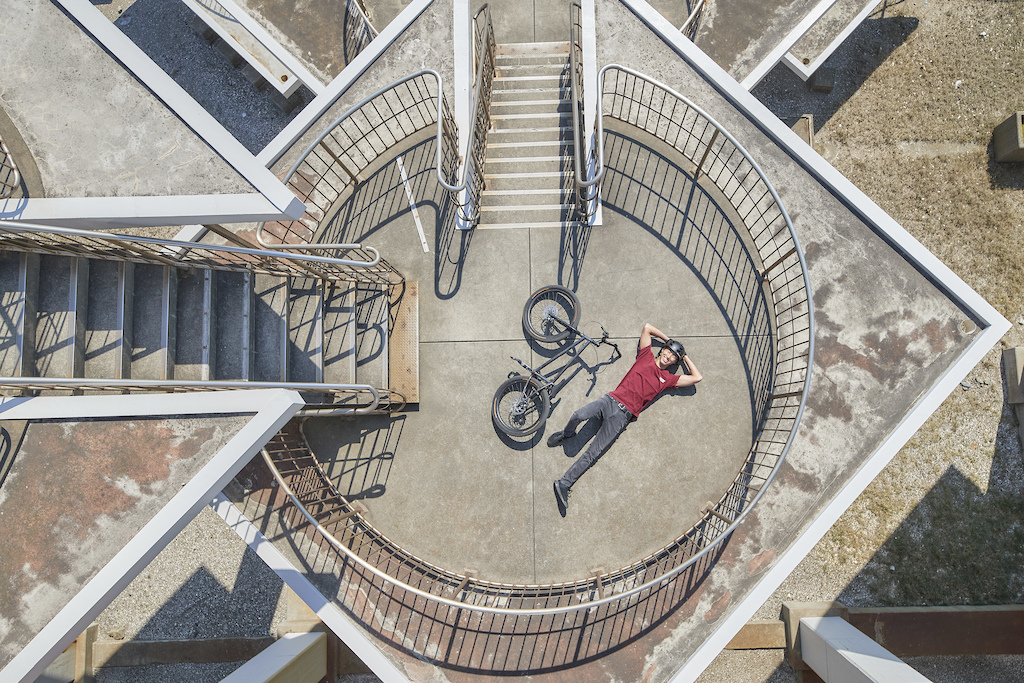 Posted In:
Interviews Getting To Know Tomomi Nishikubo

Masseemtb (Jun 21, 2020 at 8:51)
"Japan's answer" all of Japan was worried about fabio's skill and had to find an answer to him? Why not just introduce the dude

pnwpedal (Jun 21, 2020 at 9:22)
I had the same thought. "The government of Japan held secret meetings, with one goal: promote a talented bike rider from their country on the internet." The topic of riding in Japan comes up once but it's not the purpose of this article. The guy's talent is the topic, how about we discuss that?

joedave (Jun 21, 2020 at 18:05)
Was thinking the exact thing.
Talent is talent. It’s not like Austria bore and bred Fabio to be a bike wizard flipping the bird to every other country exclaiming ‘Got you by the nadz now suckers!’ Then seeing Fabio and the bird, Japan rapidly lab created Tomomi and programmed him to give the bike bird back...
Cool story, but not likely.

Always ecstatic to see newly discovered riders come forth with the bike-gnar. Keep it up Tomomi!

Masseemtb (Jun 21, 2020 at 19:51)
@friendlyfoe: it's the PB wording, sorry for your mild concern that wasn't my intent. If there is an article on a very talented rider from Japan named Tomomi Nishikubo, then why is the subject of the title about Japan? Are we getting to know Japan's answer or Tomomi Nishikubo? And why put Fabio in the title for anything other than clickbait? Try this out for size: "Getting to know: Tomomi Nishikubo-Trials champion bad ass"

friendlyfoe (Jun 21, 2020 at 20:03)
@Masseemtb: because trials encompasses a wide variety of things from hopping around on a competition course to an urban assault slopestyle type video.

Using Fabio's name gives context as to what someone clicking on the article can expect to see.

Why I'm explaining this to someone who's complaining just for the sake of complaining I have no answer to.

Masseemtb (Jun 21, 2020 at 20:45)
@friendlyfoe: it's the PB wording, sorry for your mild concern that wasn't my intent. If there is an article on a very talented rider from Japan named Tomomi Nishikubo, then why is the subject of the title about Japan? Are we getting to know Japan's answer or Tomomi Nishikubo? And why put Fabio in the title for anything other than clickbait? Try this out for size: "Getting to know: Tomomi Nishikubo-Trials champion bad ass"

NYShred (Jun 22, 2020 at 0:36)
It's the "Fabio Wibmer's cousin" foot-in-mouth all over again... It's Gabriel Wibmer. This is Tomomi Nishikubo and Fabio has nothing to do with him or his edit.

It's lame as hell to introduce people like that.

friendlyfoe (Jun 22, 2020 at 20:13)
@stevil-1: was wondering about that too. Either they felt the carnage was too graphic to show, or he didn't actually do it. I'm guessing the latter. That's a huge send onto concrete stairs.

tacklingdummy (Jun 21, 2020 at 9:44)
Not a lot of well know riders and not a big MTB scene in Japan. Seems like Japan would have one of the biggest mountain bike scenes, but it is really a tiny scene there. I have been to Japan several times (half Japanese, half Chinese), but it is so hard to find MTB trails outside the MTB parks. Most everything is pretty much on private land and need permissions from land owners. You have to ride with locals that know people.

neimbc (Jun 21, 2020 at 4:47)
This kid got some serious talent. That back flip on the stairs can be a life ending mistake if he missed it. Loved his smiles after each rad trick.

kingbike2 (Jun 22, 2020 at 9:18)
Thinking the same about that back flip...catastrophic consequences. Way cool trick but if asked I would have said don’t take the risk for the views.

elmago85 (Jun 21, 2020 at 5:16)
amazing how long toked to pinkbike to post that video. it's online since a few months with amazing riding!!! what I don't understand bike content consumers, do we really like those flat stupid narratives and plastic soulless music??? it's like for me it doesn't fit with what mtb represents...
... maybe im wrong and it is super representative I don't know. what do you think?

rrolly (Jun 21, 2020 at 8:13)
First of all, you deserve +1's for not being an idiot. It's refreshing to see someone have an opinion without shredding other people apart. For some people mtb is all about urban jump parks, riding in jeans, sucking back Redbull with screamo blasting. Fine for them, but they can have it. Give me trees, trails, and everything silent except for nature and my buddies having a blast.

shadethechangingman (Jun 22, 2020 at 3:26)
Found Tomomi a while back on insta, he seems a good guy and i like his style. He's deffo breaking through this year tho with some bigger signings to major brands like POC, i'm hoping he does something with Tom Cardy n Sam Pilgrim, would be v fun

njparider (Jun 22, 2020 at 4:42)
Amazing riding! All of you reading so much into the title need to understand that things like this may reveal yourself to yourself. You're the ones coming up with these negative interpretations. This figure of speach has been around for a very long time and I've never seen it used in a negative way. It refers to their similar riding styles. It's a literary device. Please look up connotation and denotation. If you're going to be language justice warriors, please get a basic understanding of language. Just because you've thought up something that bothered you doesn't mean that was the writer's thought, belief, or intention.

TTTT4040 (Jul 3, 2020 at 12:34)
Have ridden with Tomomi and he is pure awesome. Super nice and loves riding, even if you're a beginner and from another country. Visited twice from Vancouver and can't wait til he comes over here and to Europe. Always laughing and stoked to ride.

somebikeguy (Jun 22, 2020 at 11:05)
There’s something about this guy’s style on a bike. It’s not quite typical and very, very good. Also not typical is his ability to showcase sponsors properly. He’s great at that.

Loving it. Stoked to see more.

No seriously, good stuff !
But probably not his "Woman from Tokyo"

liv2mountainbike2 (Jun 21, 2020 at 17:04)
I wonder how long it took them to complete this film?? Sounded like he took some nasty spills, especially that bad head bruise lasting for two months!

Dimdumb (Jun 21, 2020 at 8:26)
Very impressive. Would like to see how Japanese culture would take on mtbing

johnyyy (Jun 21, 2020 at 13:25)
New meaning of effortless, seriously everythink looks like he is not struggling at all.

misterbike (Jun 21, 2020 at 13:47)
Tarek Rasouli spoilered a incoming reb bull sponsorship for a japanese trailrider in a podcast a few weeks ago, seems like its gonna happen soon

softsteel (Jun 21, 2020 at 17:15)
Why does it look cheesy to me?
What does mean Kona in japanese?
Why an answer if Fabio Wibmer has no question?
Below threshold threads are hidden

jaame (Jun 21, 2020 at 2:34)
After a few minutes I was thinking to myself, this is a great video, with some cool original tricks. I especially loved that underpass wheel stop on the ceiling thing. I was just wishing for more hot Japanese girls. I felt they could have had a couple of chicks in it just to jazz it up a bit. Then my prayers were answered with the girl at the end. That lip hair, what can I say? What a beauty!