Getting to Know: Joey Gough, Britain's Most Stylish Female Rider

JOEY GOUGH
You might have caught some of Joey Gough's upbeat, no fuss, full of fun edits on Pinkbike. Joey's stylish riding, laughter and many fist bumps with friends are infectious enough to make even a seasoned grump want to put on their riding shoes and get out for a shred. Joey's background started in BMX and trails and at one point, she was on track to race BMX professionally with Great Britain's national team. Racing is not what Joey is all about, though. She now rides purely for the love of it, and not for the results. She also probably goes way bigger than you.

Who is Joey Gough?

A BMX racer of over 30 years who dabbled in 4X for a while, rides and digs trails, and has more recently discovered how much fun big bouncy bikes are! Most of all I love riding bikes with my friends.

I'm from Norwich in the UK. It's pretty much the flattest part of the UK which was never an issue for BMX and trials, but it's not great for MTB obviously.

I'm grateful to have support from the UK branches of GT Bicycles, Sombrio, Bell Helmets, Five Ten and ODI Grips, alongside help from my friends at local companies Hardcore Hobbies and Wheel Fitness.

What’s been your favourite race/contest venue?

I don't think anything beats Fort William World Cup. In 2011 I was leading the 4X final only to be nudged into 2nd by Anneke Beerten. The support from the crowd was incredible despite the fact no one knew who I was! I went back last year just to watch the whole event and loved that too. The atmosphere there is second to none! 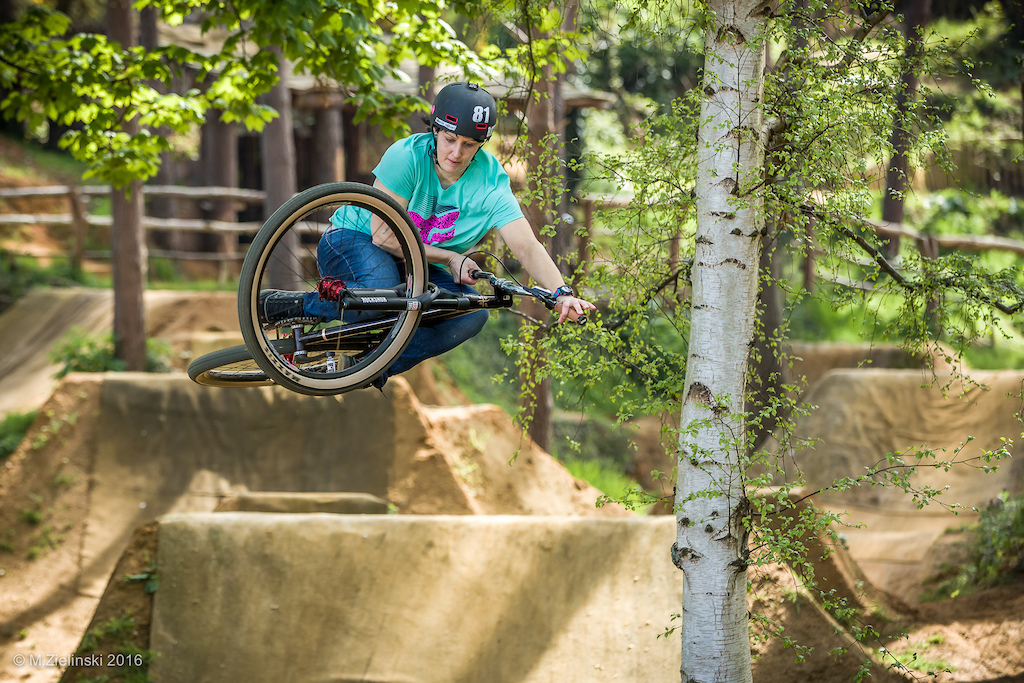 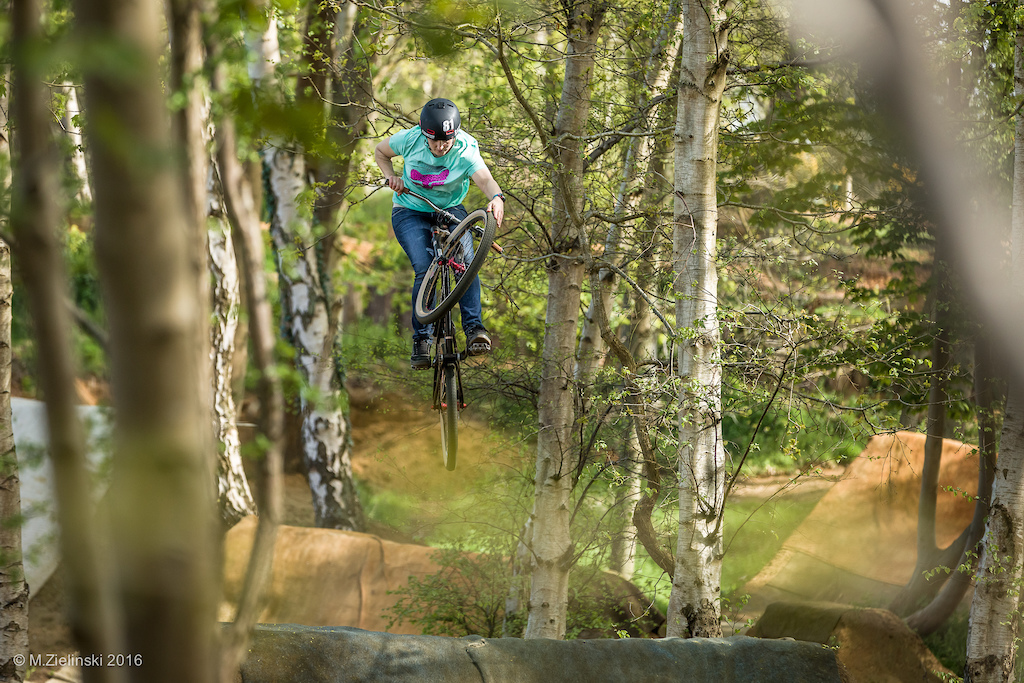 What are your favourite trails?

Full Moto at Black Mountains - the rest of the place is so flowy and fun too. I've ridden some awesome trails (dirt jumping) spots, one of the best was Boondocks in Long Island, which unfortunately got plowed this year. I was so gutted for those guys, the place was incredible. I also went to the Vans Kill the Line event a couple of years back and rode the infamous big line at Peynier. It's not the best trails line I've ever ridden, but it was one of the biggest and burliest and I was really happy I did it!

Jumping stuff on a bike.

I remember one at a BMX track when I was about 12, I took off on a double and my stem snapped in the air. I slid down the landing on my back with the bars still in my hands wondering what happened. I think the worst ones are the ones where you're hurtling OTB towards the ground head first just waiting for the impact and it feels like it's all happening in slow motion... until you hit the ground. I've had more than a few good ones like that.

Getting dropped from the British Cycling GB BMX team at the end of 2008 after two years of racing full-time. I always thought that was the dream, but I discovered this dream was someone else's, not mine. It made me realise why I ride - I love hitting jumps and going on trips with my friends, far more than I ever wanted to win anything, and no medal is worth more than the smiles that gives me. I was grateful the decision was made for me in the end, it wasn't going to be an easy decision to make myself, even though I knew it was the right one for me. I still enjoy racing, I would just never let it take over my life again.

My Titan BMX when I was a kid, I was stoked because it belonged to Stephen Murray before me. It was the bike I entered the "squirt of dirt" on, think I did a one footed can and a one hander, and Stephen won with a 360.

GT Sanction, GT Fury, GT Ruckus DJ. I still have my BMX too but I've not ridden that much lately.

Brian Foster, all round BMX legend.

People who've made a life for themselves that they really love. I have specific people in mind but they are no one rich or famous, just friends or people I've met. Success is subjective.

I'm pretty obsessed with bikes, so I am never that far away from them! I like to video a lot of the riding trips I do and love making edits. They aren't anything special technically but they document some great times I've had on my bike. If I go back and watch ones I made years ago, it just takes me right back there and makes me smile all over again.

BBC Radio 6 or absolute 80's when I drive out of the countryside far enough to pick up the signal.

Probably the Sprung videos. I was more BMX than MTB back then, but Sprung interested me more than BMX videos as I was into race and trails, not park and street and I just loved the vibe they had. My favourite BMX video would probably be Building the Underground. I can't listen to Rebel Yell without doing an air tabletop.

Step Brothers, Anchorman... I love a Will Ferrell movie or similarly stupid comedy.

Metcheck.com. Weather checks are vital for trails trips or BMX tracks. If it's an MTB trip to Wales, I still look, but I'm not sure why. It's always gonna say rain and I'm still gonna go!

My editing program crashing or my laptop deciding to shut down and install updates at an inconvenient time. People demanding the location of secret trails, publicly!

Riding bikes with my friends. 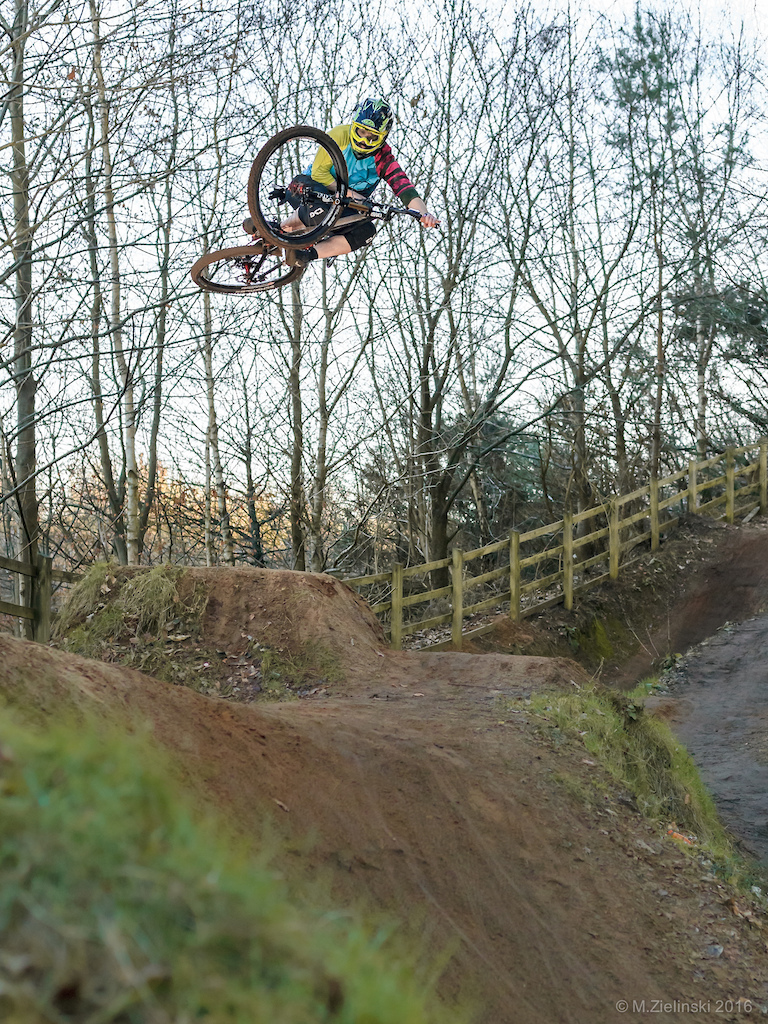 I'm not a pro mountain biker, I work in the hospital as a clinical coder during the week. It's not the dream life by any stretch, but it allows me to make the most of all the spare time that I have, riding my bike and going on trips as much as possible. I'm sure there's something better I could be doing, but I'll have to take my mind off riding for long enough to work out what it is!

I see "the sport" as riding bikes in general. There's no one in charge of that. That's one of the great things about it.

I don't ever want to hang up my riding shoes and be remembered, I fully intend to ride bikes of some sort for as long as possible! I don't know, I don't really think about it, I just try to be a good person and enjoy riding my bike. It feels really great to have a positive effect on people, like when people say the videos I post just make them happy and want to go and ride - that's just the best compliment! But I ride the way I do because I love it, not because I think someone else will love it and will remember me in years to come.

What does the future hold for Joey Gough?

More jumps, more trips, more fun. I'd like to do a trip to Whistler in the near future, just to ride... although maybe doing Crankworx would be cool, it looks like a fun event!


Posted In:
Interviews Getting To Know Joey Gough


She shreds precisely 237% harder than I do.

VideNinja (Jan 28, 2017 at 2:02)
I'm lucky enough to occasionally ride with Joey, she's super friendly and such a blast to train down anything with jumps in! Great interview, really shows she's in it for the biking with buddies vibe and the good times that come along with it. Nice one!

rcrdrvr (Jan 29, 2017 at 13:03)
Chick totally rips, been a fan for a while. Boosts like no other. Kept thinking bout Ratty with her answers to those questions. Exactly the reasons why 98% of riders love two wheels. Sweet write up, congrats.

mannybee (Jan 28, 2017 at 6:47)
Seen herride at Heywood BMX track once and she's flipping good ! I love her philosophy, sack the racing off and do it for fun, nice and chilled sessions with your mates. Nice one Joey

Suzlacey (Jan 28, 2017 at 12:02)
Awesome stuff joey! You've always been a huge inspiration of mine! And yes you would love crankworx! Especially the Air DH!

pourquois-pas (Jan 29, 2017 at 10:28)
Rampage maybe, but Casey Brown and Betz have each already shredded with the FEST crew

Kramz (Jan 28, 2017 at 3:57)
I was thinking the same thing, but then I thought, the people having the children are probably champions in their own way (possibly professional athletes themselves), so it doesn't surprise me, or make me feel bad. Think how good Mat Hoffman's kids would be if he pushed them.