Getting To Know - Morgane Charre

Morgane Charre
Even before Morgane was crowned the Elite Women's World Champion in Leogang in 2012, she was a solid podium contender at both domestic French races and on the World Cup scene. After that event, she knew what she was capable of and has proven that when it gets steep or gnarly she's in her element. In 2018, Morgane is looking for a change of pace from the routine of World Cup DH racing she's become accustomed to since her first race back in 2010. We caught up with her to find out more about how she's got to where she is now and where she wants to go looking forward.

Who is Morgane Charre? Describe yourself.

A 27-year-old french girl who loves playing outside, especially on two wheels.

I’m originally from the Ardèche area near the south of France but I moved to Annecy in the Alps nine years ago to study for a Physics degree in a sports university. I loved being surrounded by the mountains so I stayed in the area. I now live in a tiny village just five minutes from La Clusaz and about one hour from Morzine.

It varies a lot, but let’s say I wake up, have some cereal for breakfast, then I do some emails, paperwork or anything I need to do on the laptop. After that it gets a little more exciting: I’ll usually do either a proper training session before lunch (gym, sprints, etc.) plus a ride in the afternoon or just one longer ride on the enduro bike, for example. It varies a lot depending on the time of the year and the days. I follow my trainer Laurent’s instructions and he always find some new fun stuff to do. When the weather is nice I like to go to the skatepark or pumptrack for a chilled out evening session or to Lake Annecy for a little picnic and swim. 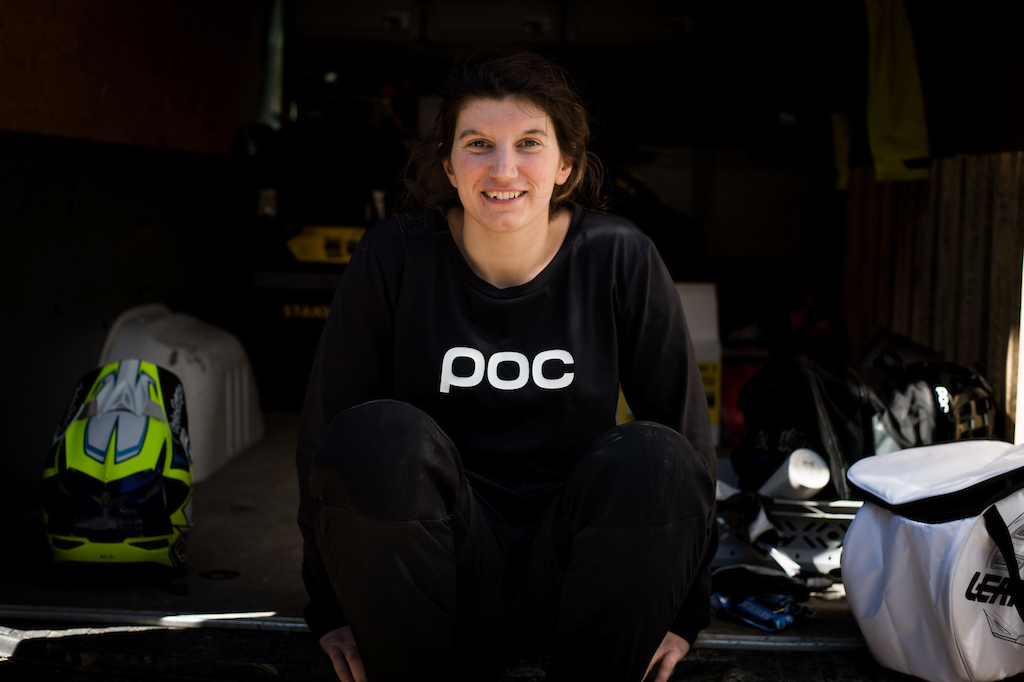 When did you start mountain biking?

Let’s go back to the start: In the early days of my two-wheeled life, I spent my days on small wheels, riding BMX at skateparks and dirt jumps across France. Mountain biking, downhill in particular, came into my life in my late teens and rapidly became my passion. I was inspired to ride new and exciting places on an upward learning curve. Competition wasn’t the priority – not to start with anyway. 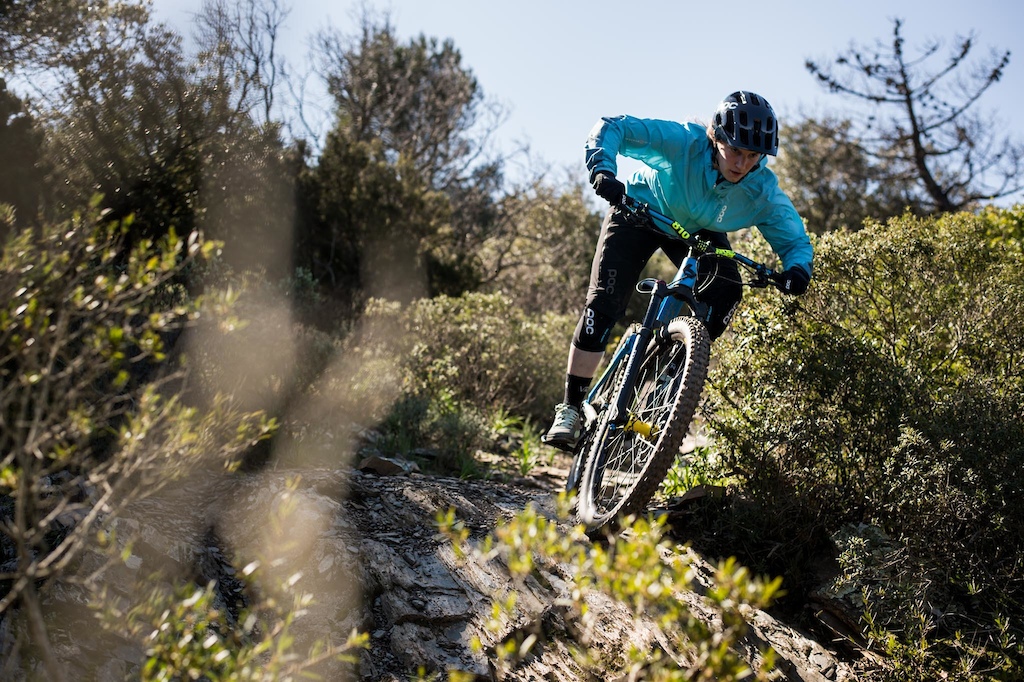 So what made you want to start racing?

With progression came the desire to race downhill: French Cups first, then my first World Cup in Maribor 2010. After that everything went into fast-forward, with a World Champion’s title in 2012 and then nine World Cup DH podiums in the following seasons. It was a crazy whirlwind being on the circuit, and in that time I travelled the world and met some amazing people who shared this same passion for the simple pleasure of riding bikes.

Mixing my professional career (at that time in aerospace) with a summertime racing schedule was a dream come true in my first years of World Cup DH. Then, the opportunity to go full time in the sport in 2016 blew my expectations of good fortune.

I want to carry on getting the most out of the good luck and opportunities I’ve been given to ride and race bikes as a career, which is why I’ll be changing things up for 2018.

For 2018 I’ve gone back to the drawing board, swapping full-time World Cup DH for a mix of Enduro World Series and Crankworx events. Meanwhile adding in a variety of personal projects along the way. 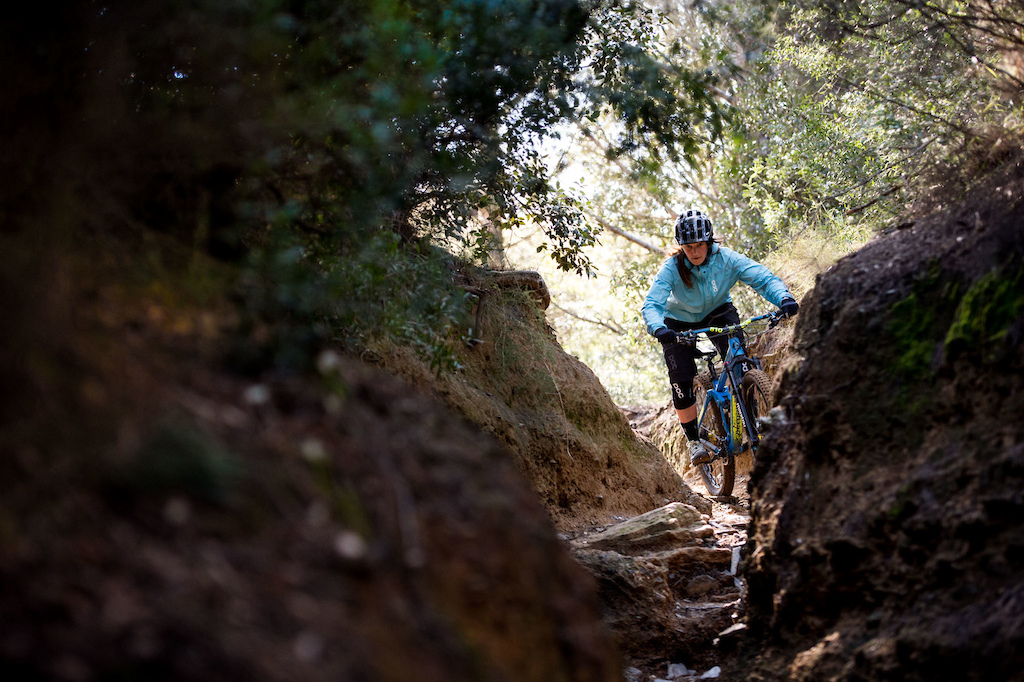 Was it a hard choice to step away from DH racing?

I realised last year that the World Cup DH tracks at the moment resemble less and less what I like to ride: raw, technical, varied terrain. Elsewhere in the sport right now, there are so many chances to ride more of what I consider fun terrain that it would be a shame to keep on racing a series that doesn’t completely correspond to me. Don’t get me wrong, I have loved every second of full-time World Cup racing and appreciate my enviable position as a full-time rider, it’s just that with other options and the full support of my sponsors, who wouldn’t take the same step?

Racing select Crankworx events over the last few years has left only good memories, whether that’s on the pumptrack in Les deux Alpes or racing downhill in Les Gets. Each event I’ve raced has given me amazing moments: the atmosphere, level of riding and quality of tracks are unbeatable.

Therefore, while I won’t be at all the World Cup DH races this season, I most certainly won’t be quitting downhill. I’ll be at Crankworx Innsbruck, Les Gets and Whistler to race downhill and pumptrack. And why not try some new disciplines while I’m there..? My ever-dependable Straitline DH bike will take me to select other races too, such as the French Champs, DH World Cup La Bresse and more… I can’t wait. 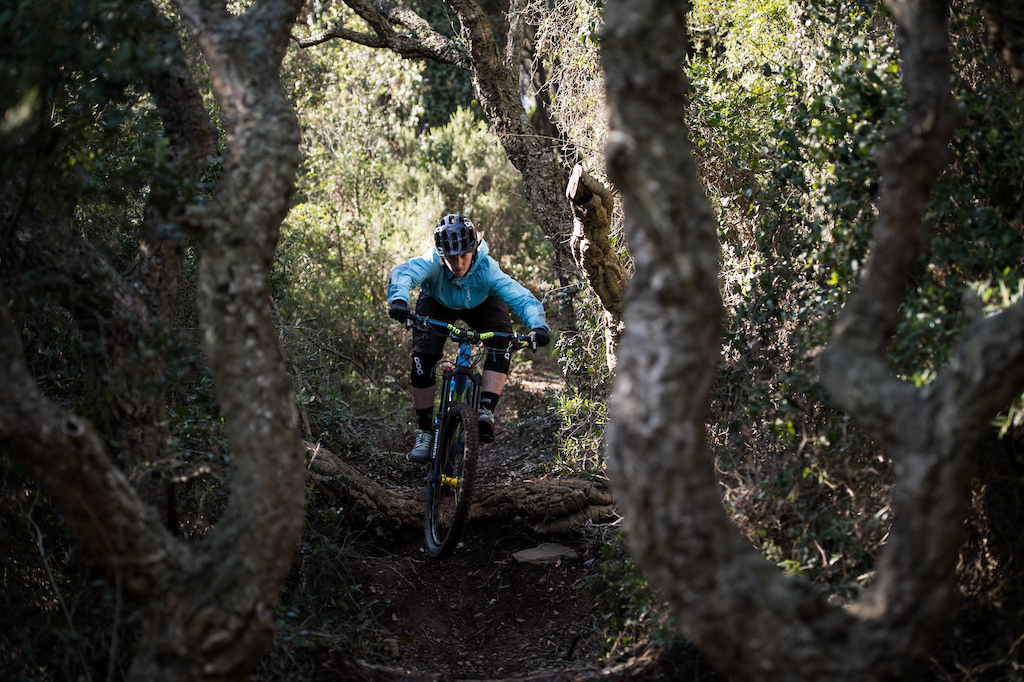 How have you felt about your results over the last few years?

The past few years have been full of ups and downs. Stepping on World Cup podiums is an incredible feeling but I also had to deal with a few injuries — as any downhiller does, I guess. I feel like I could have done better in terms of results but in this sport there are so many variables to deal with, it’s hard to make everything perfect and we’re a lot of girls out there aiming for that same top step… Overall I won’t have any regrets!

Talk to us about your World Championships win – what was it like?

2012 was my first World Championships and I only had one World Cup podium before that. I loved the track in Leogang and was having a lot of fun in training. I was hoping to be in the top five but wasn’t putting too much pressure on myself. I had a great run in finals, it felt like I was floating over the roots and I took the hot seat with seven girls still to go. When I realised I would be on the podium I was the happiest girl on earth, it was amazing. But then with only two riders to go it started to feel unreal, I couldn’t believe it was actually true. We had a great group of girls in the French team at that time and sharing that win together was an unforgettable moment. Some of my close friends were also there to watch the race, it was just perfect. My biggest dream came true. 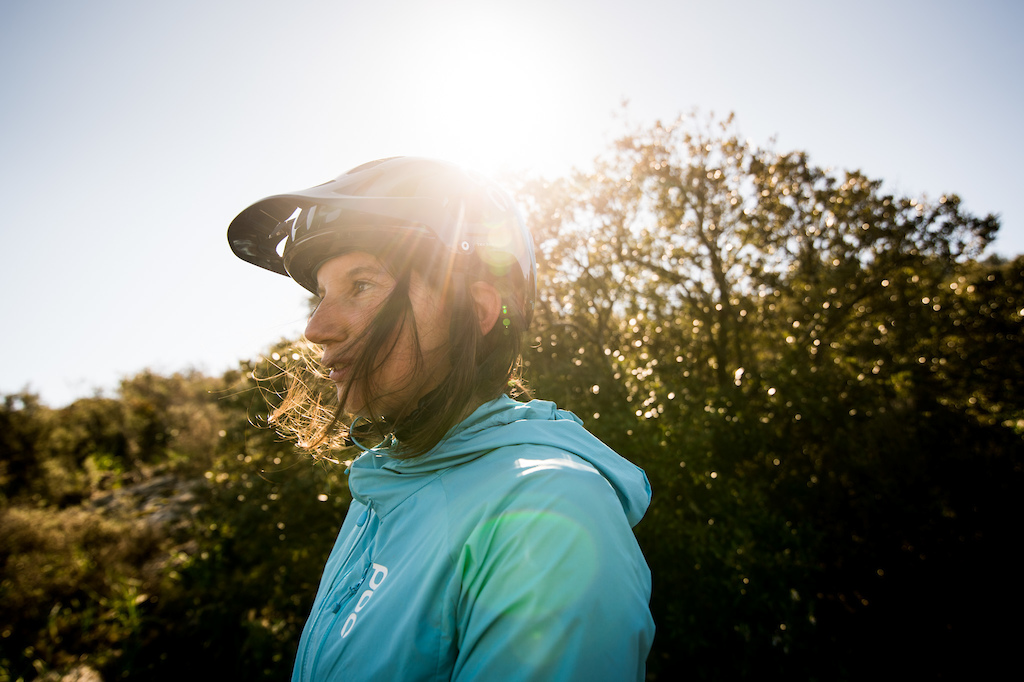 So what does the future hold for you?

I’ve been tempted to race an EWS for a long time, and last October I finally found myself on the start line in Finale Ligure. In the weeks leading up to that event, I found myself trying to prepare for something completely new and unknown. I once again felt like a beginner, and the excitement of a steep upward learning curve took hold. In EWS, everything is different to a downhill race, from preparing the bike to the backpack and not forgetting the rider!

I have to say, that did me a lot of good to be back at square one, where everything was new. It was tough, long and physical, but it was such a good experience to race that enduro! I loved the long days on a bike, riding all sorts of trails and trying to find my limits. The event completely destroyed me but I enjoyed it from the start to finish. I placed eighth in that first EWS and the experience left me wanting more; itching to see where I can get with a little more preparation. In 2018 I’ll be racing all of the European rounds as well as Whistler EWS.

Do you have any expectations for your enduro career?

I feel like a lot of girls in enduro really stepped up their game the last few years (Cécile would have placed 57th in the men’s category in Colombia!). I don’t really know what to expect but I’ll give my best. 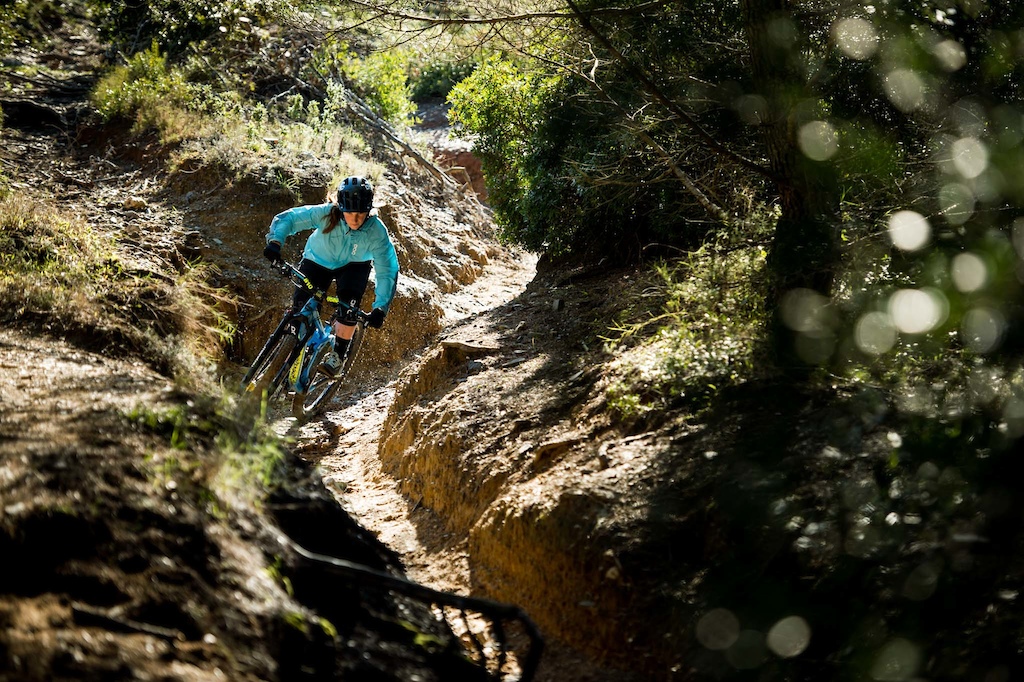 So what is your favourite type of riding? Are you still a downhiller?

Ha, of course I’m a downhiller… but not only that! I love riding my DH bike, my hardtail, my enduro bike, my BMX. I guess I don’t fit into one specific category. 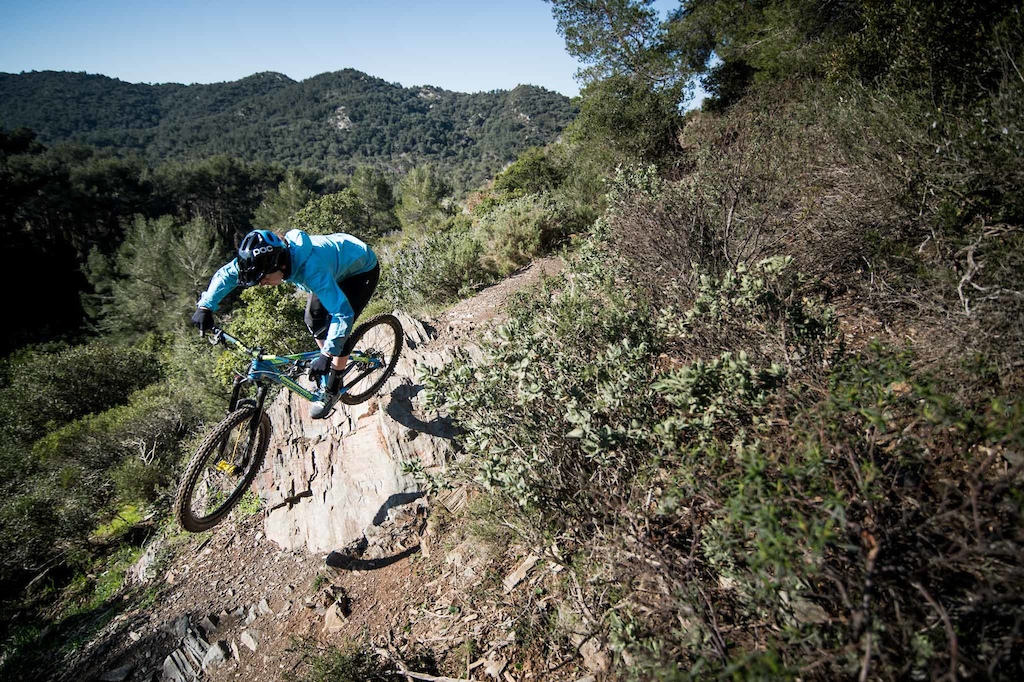 What do you think your strengths are? And your weaknesses?

I would say my biggest strength is that I absolutely love being out on my bike or even training. I’ve always loved sports in general and that makes it easier for me to go out and train.

Weaknesses… I think I’m not 100% driven by competition as much as some other girls are.

Has anyone inspired you to get to where you are?

My biggest inspiration in mountain biking was Sabrina Jonnier. I remember reading an interview with her in a magazine when I just started riding and I was such a big fan. Then I got to meet her and we spent the week together in Leogang 2012 as we were sharing a room. I was really shy at the start but she was super nice to me and we had a really fun week together. She’s definitely my hero. 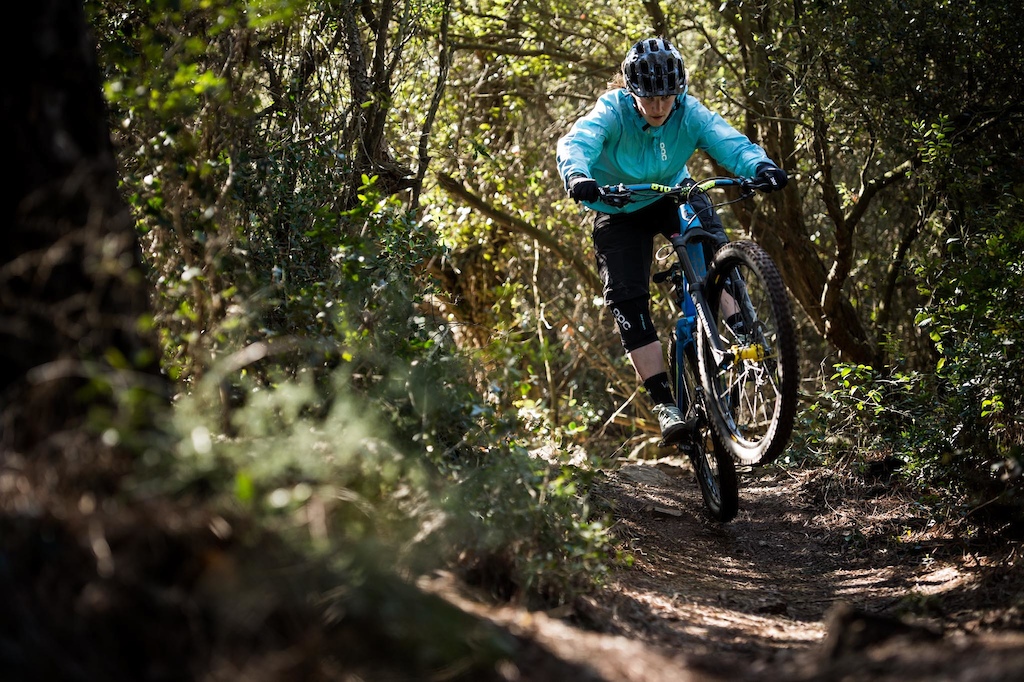 What do you think the future of our sport – enduro and downhill – holds?

I think we’ll see more and more young fast girls riding and racing, and that makes me happy. 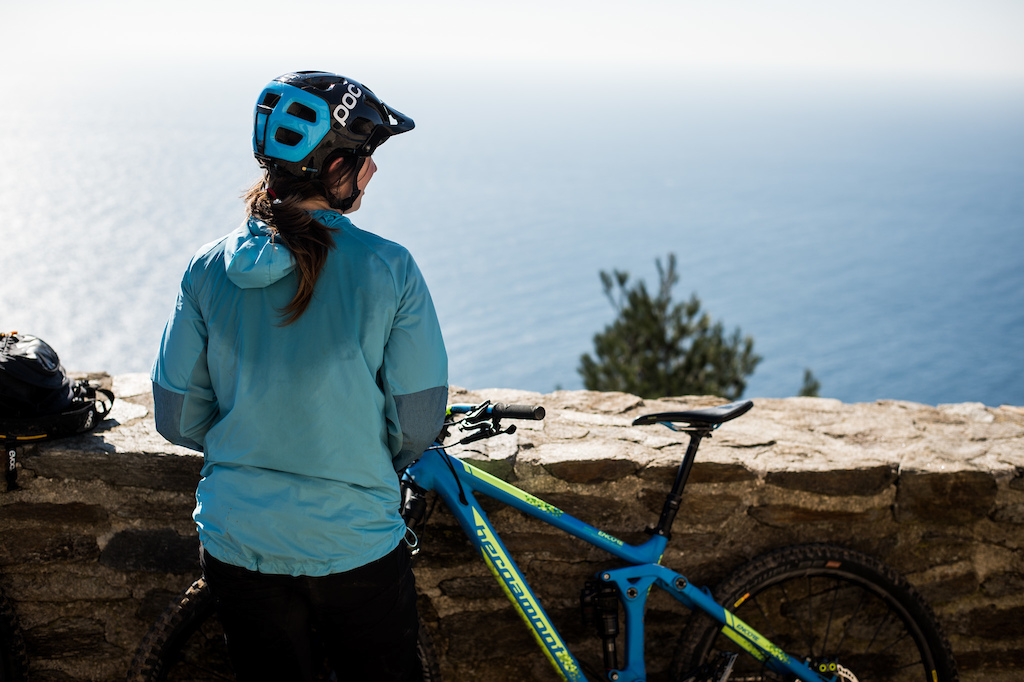 I also continue the partnership with Manitou, Answer and Magura, who are kitting out my bikes for the third consecutive season. Top Club Valence and CDOS Drôme – two local sporting organisations from near my hometown – continue to support me in bringing my projects to reality. Five Ten will once again supply the best shoes for flat pedals.

I am super happy to announce three new supporters: I’ll be wearing kit and protectives from POC this year. Mavic will join the adventure for 2018, as all my bikes will be running on Deemax wheels. I am also partnering with Cycletyres.com, a bike tyre specialist. Finally, look out for some loam-filled videos from La Clusaz, my local resort (perhaps the Alps’ best kept loam-stash), who I’ll be proudly promoting as an official ambassador. 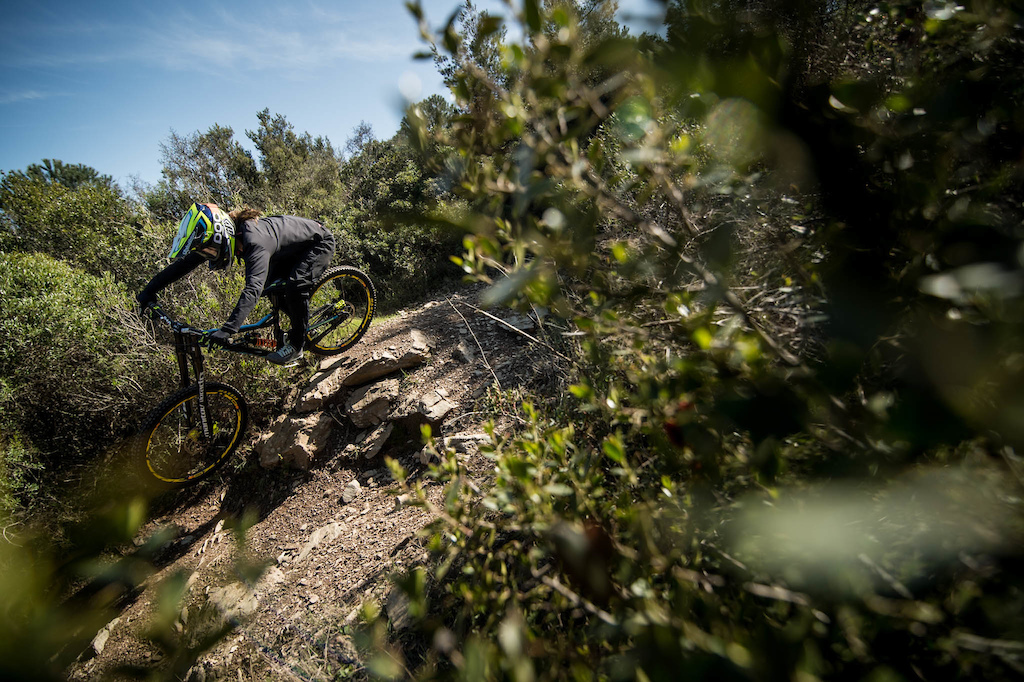 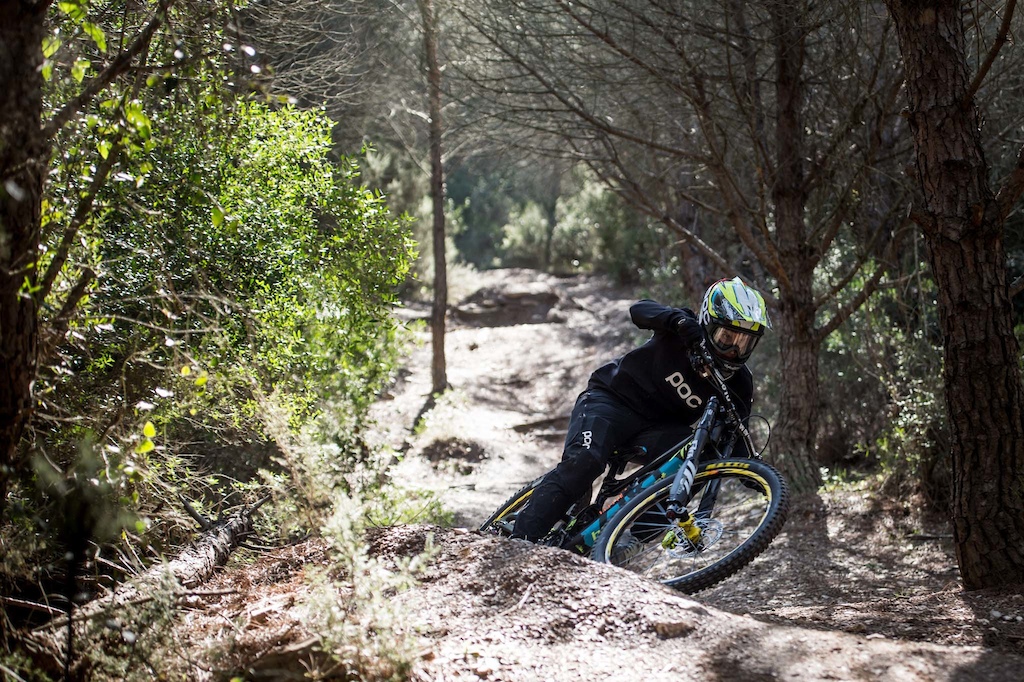 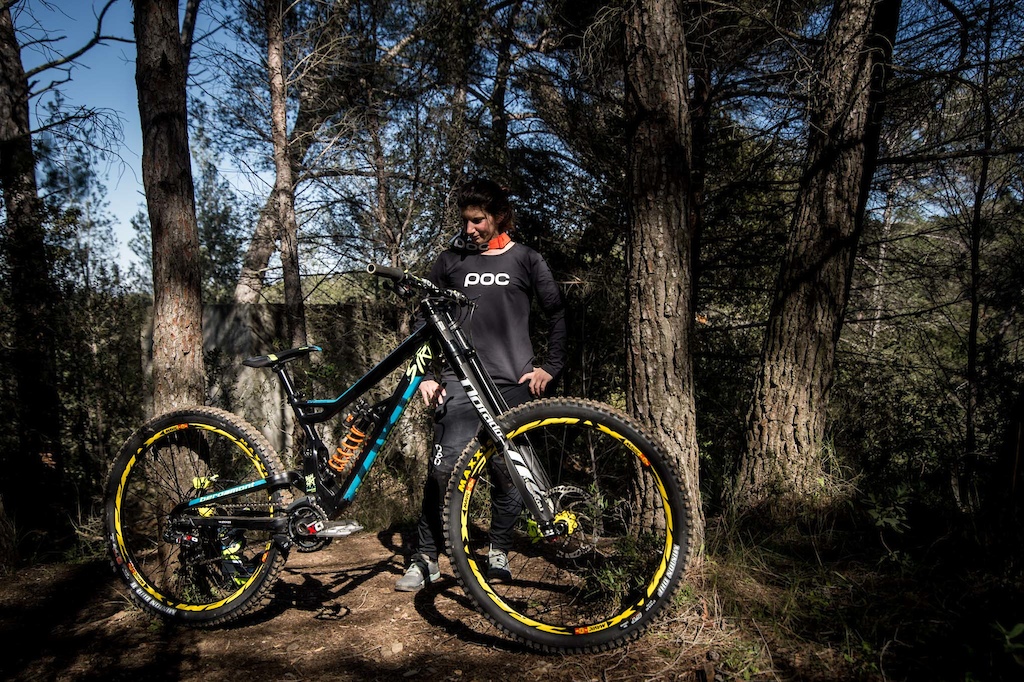 All photos thanks to: Paul Humbert


Posted In:
Interviews Getting To Know Morgane Charre

Dropthedebt (Apr 28, 2018 at 3:04)
Always a pleasure to see Morgane on the Pinkbike front page. Anytime you see one of her videos it's clear she has bundles of skills and a firing passion for riding bikes.