Jaxson Riddle
Jaxson Riddle rides big bikes with a composure and style that far exceeds his age. Hailing from St. George, Utah Jaxson got his first downhill bike when he was 15. He hasn’t put the big rig down since then and is progressing to a level that landed him a trip to Nico Vink’s Loosefest this year. We talk to Jaxson about how he got into freeride, his hiatus from social media, and the work he’s putting in to get to his biggest dream.

Well you may know me as an “Instagram” rider. Unfortunately, my generation's idea of a successful bike rider is whoever has the biggest following or most views. This led me to ride for the numbers and forget the whole reason I enjoy mountain bikes. I’ve recently taken a hiatus from the whole social media world because it became an unhealthy obsession. Taking a break has allowed me to step back and put things into perspective. I'm putting my time and effort into bigger things I’m really proud of and stoked on. You’ll be seeing more project-based videos in the near future!

I’m from St. George, Utah and still living there. 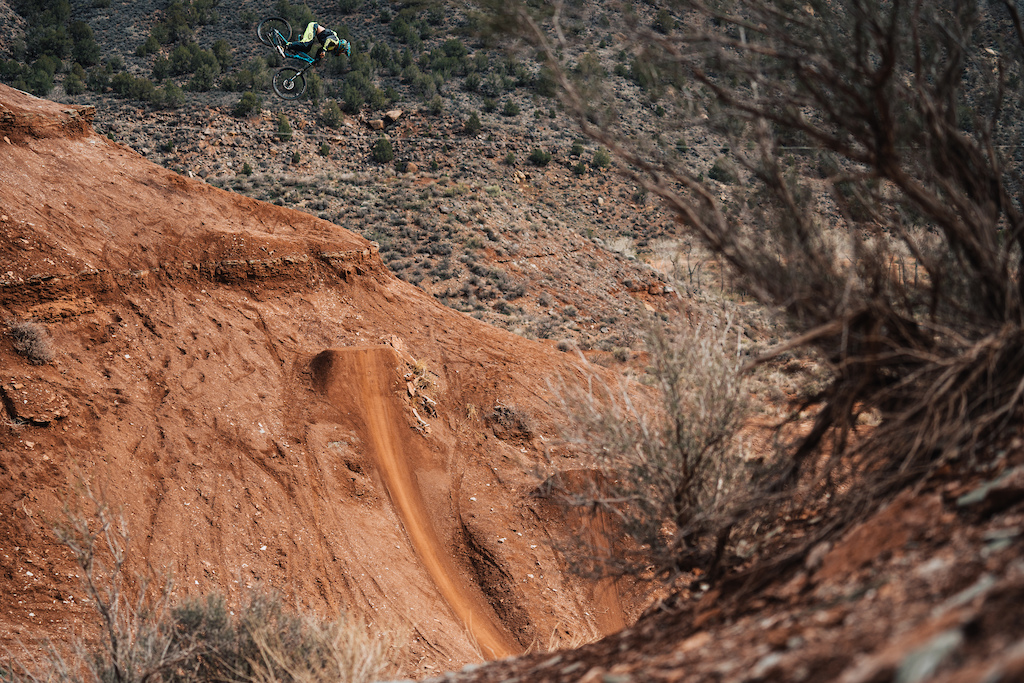 Going high and finding lines that no one else sees.

I could definitely improve my bike control and ability to do tricks.

Most of the time I wake up then talk myself into a cold shower and pushups. Next, I hydrate, eat some breakfast and get coffee going. After that, I’ll head to work over at the local bike park and get in some shovel time. When work is done I’ll either go ride or catch up on school work. When I’m not at work you’ll catch me in Virgin digging or riding.

How old were you when you first rode a DH bike? 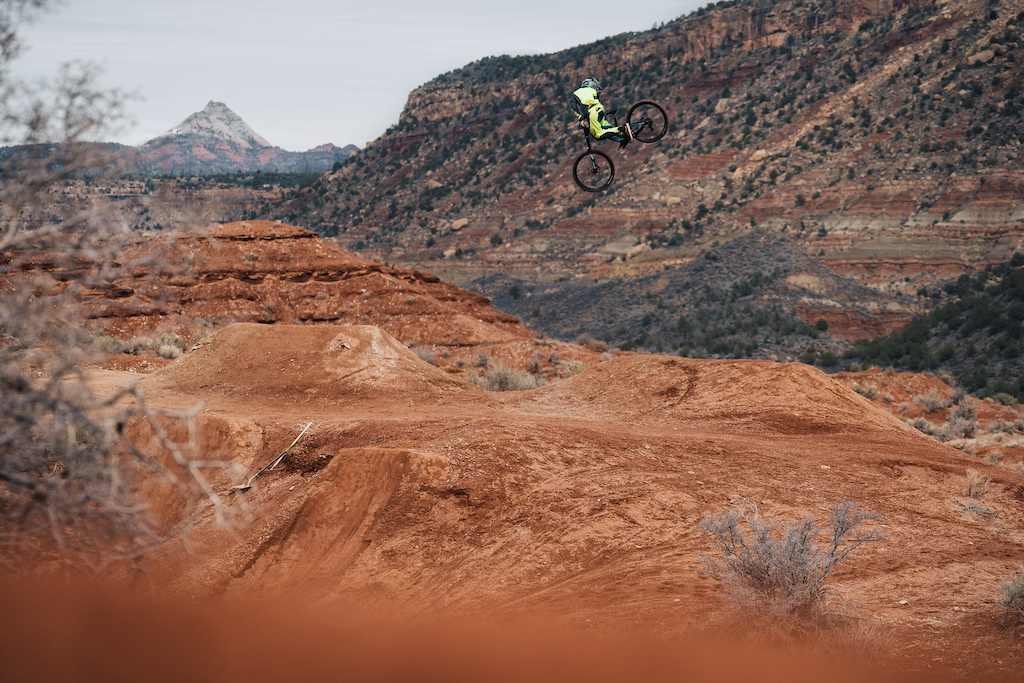 How did you get into freeride?

I was first introduced to the freeride scene through a couple of homies: Reed Boggs, Dj Brandt, and Ethan Nell. When I was a little BMX grom I hit up Ethan and asked to ride his yard. Soon after I bought an old hardtail he had and got hooked on the high speeds and big air. I stuck with it and here we are.

Do you have any big projects or trips planned for the rest of 2019?

About two months ago I built up my new bike and was still getting to know it, hadn’t ridden in a month or so. I sent a flat spin but overcooked it straight to my head knocking myself out and splitting my chin. Not a sick one.

I’ve only ridden in Southern Utah and Whistler, that’d have to be it. 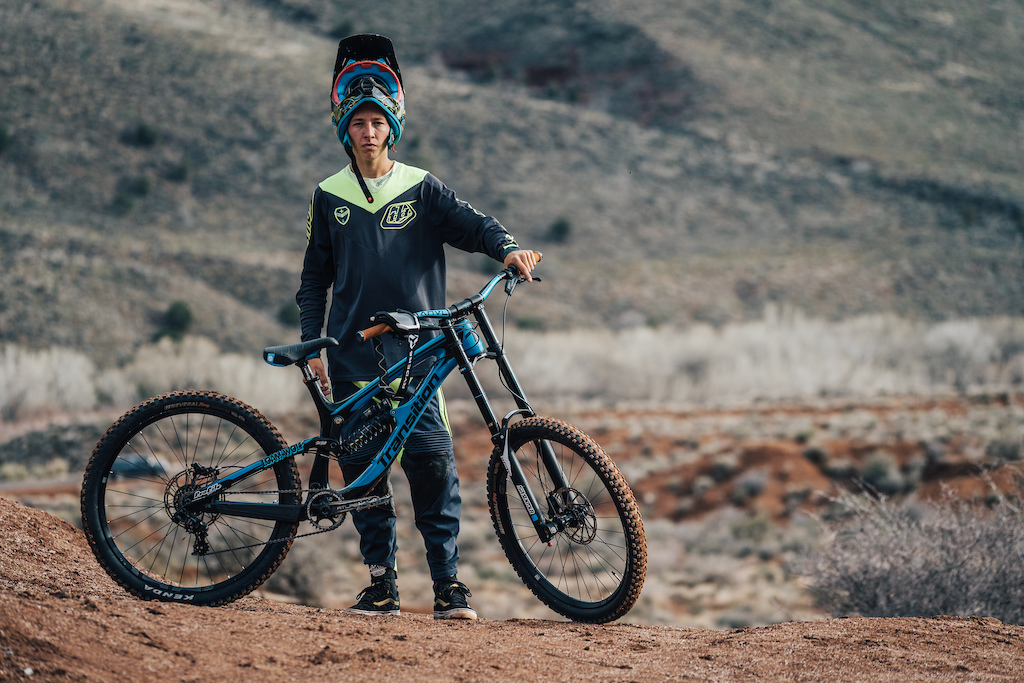 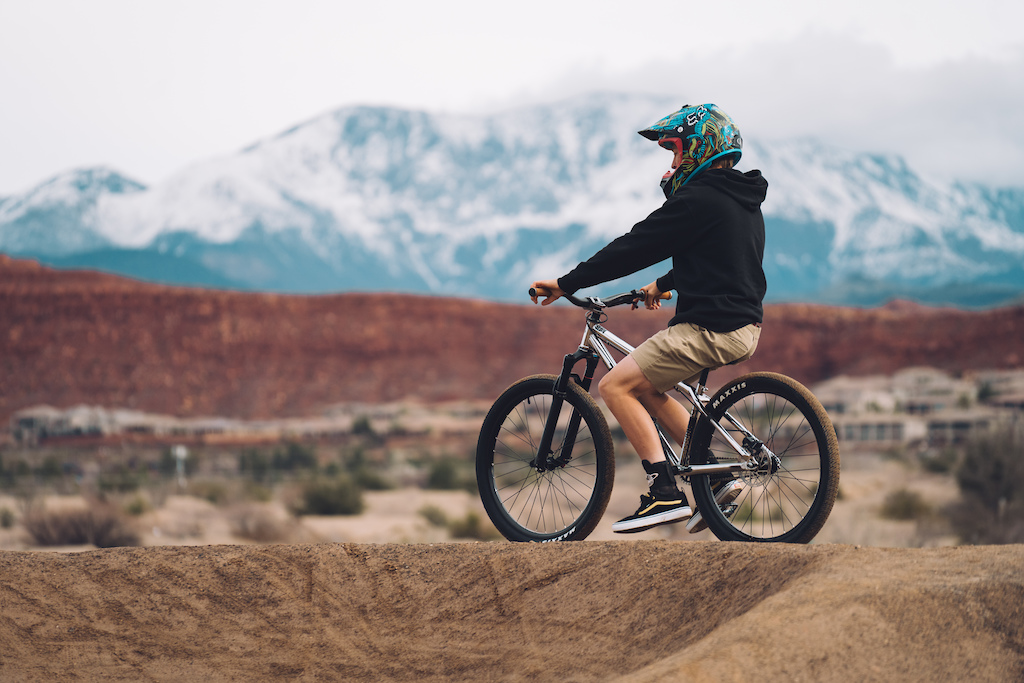 Too many great dudes out there. Probably everyone from New World Disorder and Matt Macduff.

I get a lot of inspiration from Semenuk. The guy is like the Elon Musk of mountain biking. The innovation and work that dude puts out is unreal. The McCaul brothers are two of the most likable down to earth dudes you’ll ever meet. On their worst day, they’re still more stoked than most people. 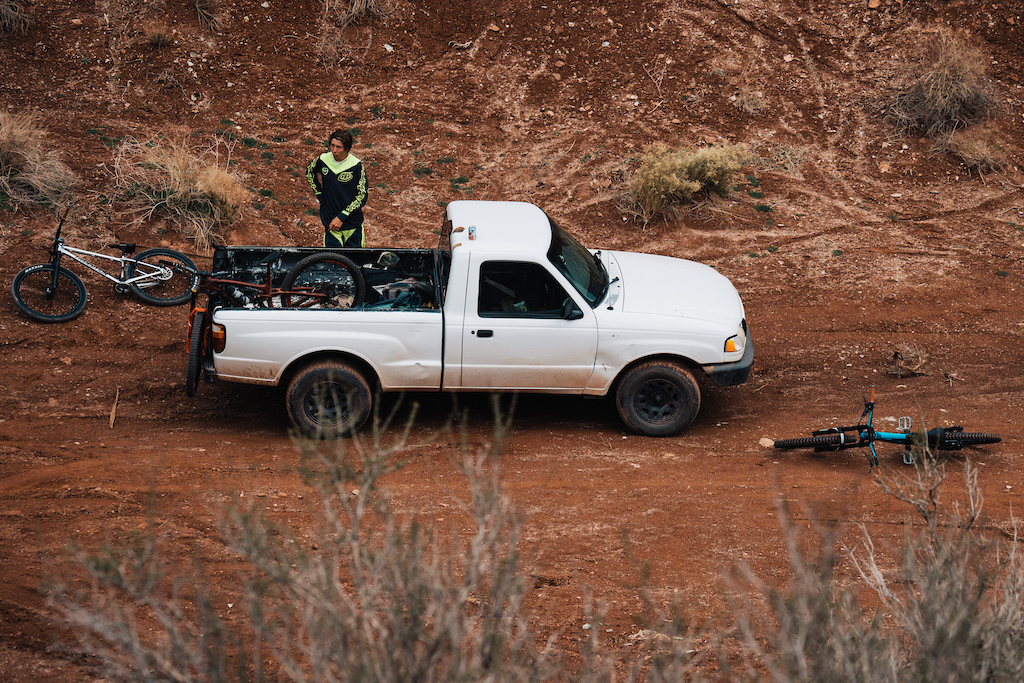 You’re here for a good time not a long time.

When you tell someone you ride bikes and they refer to it as skating.

Anything and everything bikes. 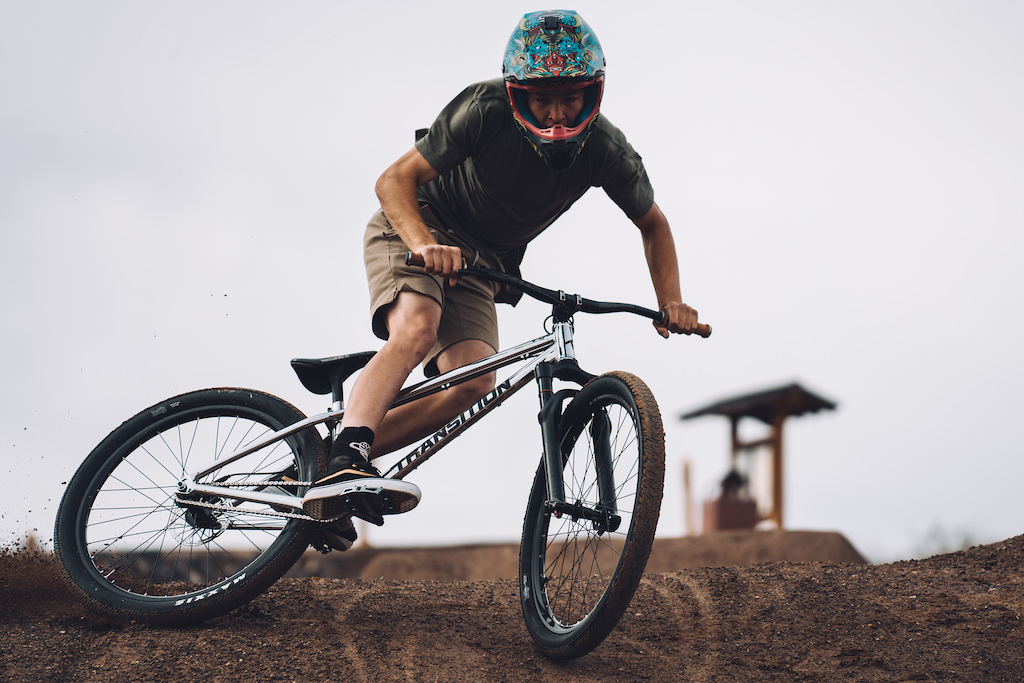 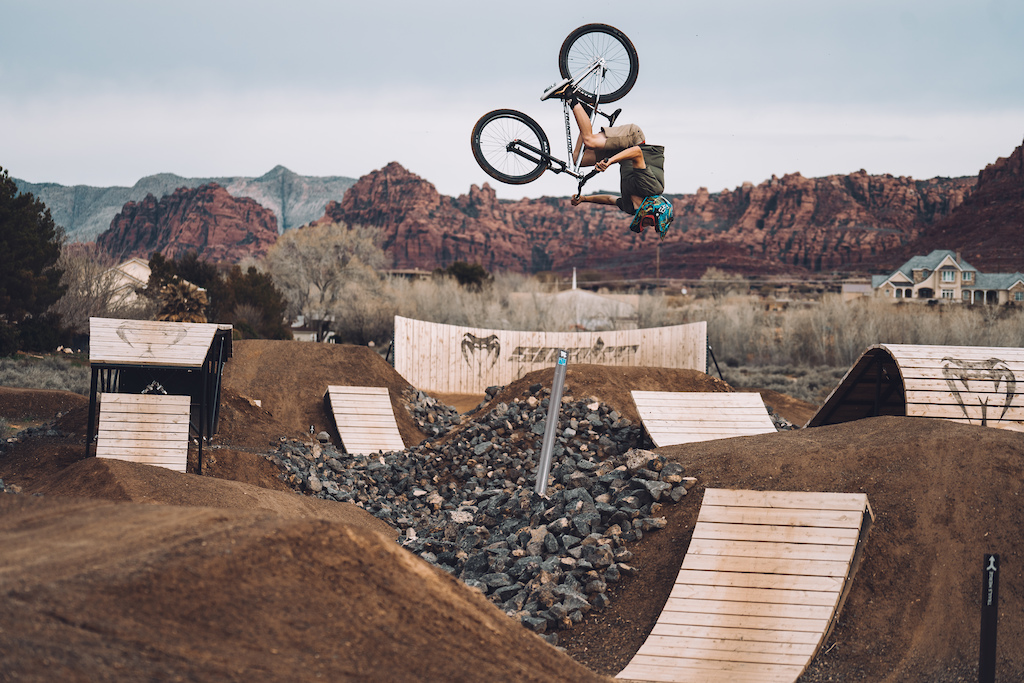 Where do you think the future freeride is headed?


Well, as of now it looks to be headed toward Instagram videos of pit bikes, cowboy hats, and shotgunning natty lights. It is freeride though, so who really knows, anything can and will happen.

As a humble, prepossessing, yes man individual. To me, it’s more than who you are on a bike. If I can positively exceed your expectations of who you think I am, I’m psyched.

What are your plans for the future?

Work hard at one of my biggest dreams: becoming a Red Bull athlete. I want to enjoy life and not take things too seriously. Life’s short so do what you love before it’s too late because time waits for no one. Cheers to everyone who continues to support the dream! 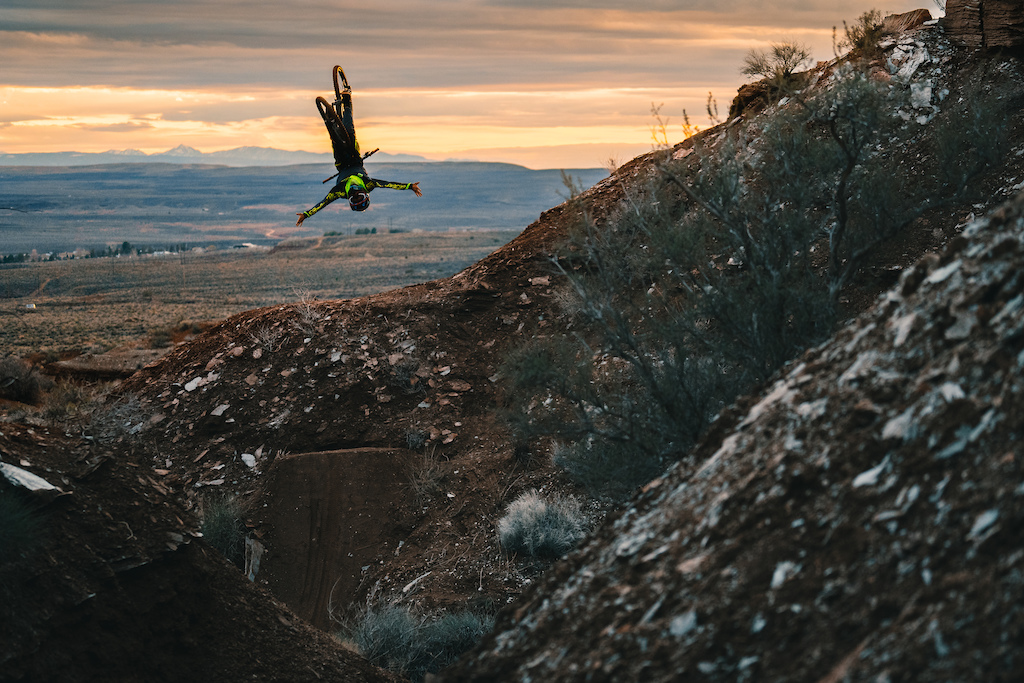 Posted In:
Interviews Getting To Know Jaxson Riddle

Lone-Wolf-Productions Plus (Apr 9, 2019 at 8:36)
I met Jaxson last year while shooting with Ethan, DJ, and Watts. For the first while I didn't realize who he was. He's super quiet, super polite and low key. If he wants to be remembered as humble he's succeeding because that's exactly how I'd describe him. Wish we could have shot with him more. Jaxon if you're reading this and you have projects you need media help with hit me up.

oldmanhucking (Apr 9, 2019 at 11:43)
Hey Jaxson, keep up the fine work dude. I'm a 51 year old man and your answers to those interview questions were WAY beyond what I'd expect from someone with 17 years on this planet.......really enjoyed your perspectives. All the best to you in everything you pursue

christian-peper21 (Apr 9, 2019 at 4:08)
I’ve ridden with Jaxson in Southern Utah and the kid is an absolute ripper, not to mention his age! Can’t wait to see more out of him w/ the new sponsorship!!

niebs12 (Apr 9, 2019 at 15:49)
never heard of a 17 year old taking a social media hiatus - this kid is head of the game. I'm 26 and I hate social media yet I find myself trapped and needing to take breaks here n there. The fact that he is able to realize the detriments of instagram make me like the kid. I'll keep watching for him at rampage

gnarlysipes (Apr 9, 2019 at 8:54)
I visit St. George often and I’m wondering where the “local bike park” is. I’m hoping I’ve been ignorant of a hidden gem but I’m thinking it’s a public place where he works (read: volunteers), building jumps and features.

gnarlysipes (Apr 11, 2019 at 15:43)
@tgent: thanks for the tip! I’ve been in the last few months but I don’t follow city news closely and always hit the same trail system when I go.

shedsidechuck (Apr 9, 2019 at 8:55)
i hope that house in the yard is Ethan's. These riders dont get paid much. That house gives me the impression that somebody's getting paid and it seeing it gave me hope.

Dstols (Apr 10, 2019 at 17:12)
Awesome kid. Stoked to see what the future brings for you Jaxson! Glad I got to meet you. Super chill and humble. Keep shredding!

BeardlessMarinRider (Apr 9, 2019 at 4:00)
Looks like a heck of a shredder! Maybe it is just the grumpy old git in me, but a life dream of getting sponsored seems to miss the big picture.

PHeller (Apr 9, 2019 at 4:54)
Its a funny aspiration for a freerider, for sure. Ive offten wondered about the pay scales for guys who dont race, but do nothing but big air events. Semenuk is an outlier for sure, but for how long? Will the public eventually grow tired of watching a level of riding (and associated media) that cant be elevated? Or will freeride evolve in a Rampage-Like Touring event, like Nitro Circus or more traditonal racing?

mobil1syn (Apr 9, 2019 at 8:35)
I think he realizes being part of the Redbull family will give him the opportunity to do cool things. No way Darren, Andreau, Danny, Carson, or Brandon do what they do without the wings on their head.

PHeller (Apr 9, 2019 at 9:51)
@mobil1syn: I certainly want these kids to get good sponsors, for sure, and for no other reason than it allows them progress the sport with health insurance and a safety net for injuries. I just hope they also look at building other, more widely employable skills, then again when I was 17 I wanted to be a photographer, lol. Nobody makes money travelling the world doing that, right? /s

mustbike (Apr 9, 2019 at 13:21)
Becoming a red bull athlete means $$$. What he is really saying is he wants to be a true professional and live off his riding. Makes sense.