Getting to Know The Viking - Brage Vestavik

Brage Vestavik
The average 18 year-old would be attending high school right about now, but not Brage Vestavik. The Viking is busy training for race season having recently joined the MS-Mondraker Development Program. When he's not out destroying berms, Brage rebuilds them being an avid trail builder and content creator. As a veteran of Red Bull Hard Line, it will be exciting to see what Brage brings to racing in the coming years.

I'm an 18-year-old shred-Viking from Norway.

I love shredding my bikes and my ancestors are Vikings from the North. And my dad and brother look like proper Vikings and I really hope one day I can grow a beard like them. At the moment I'm working hard on a moustache, haha. Also my name is an old Norse/Viking name. 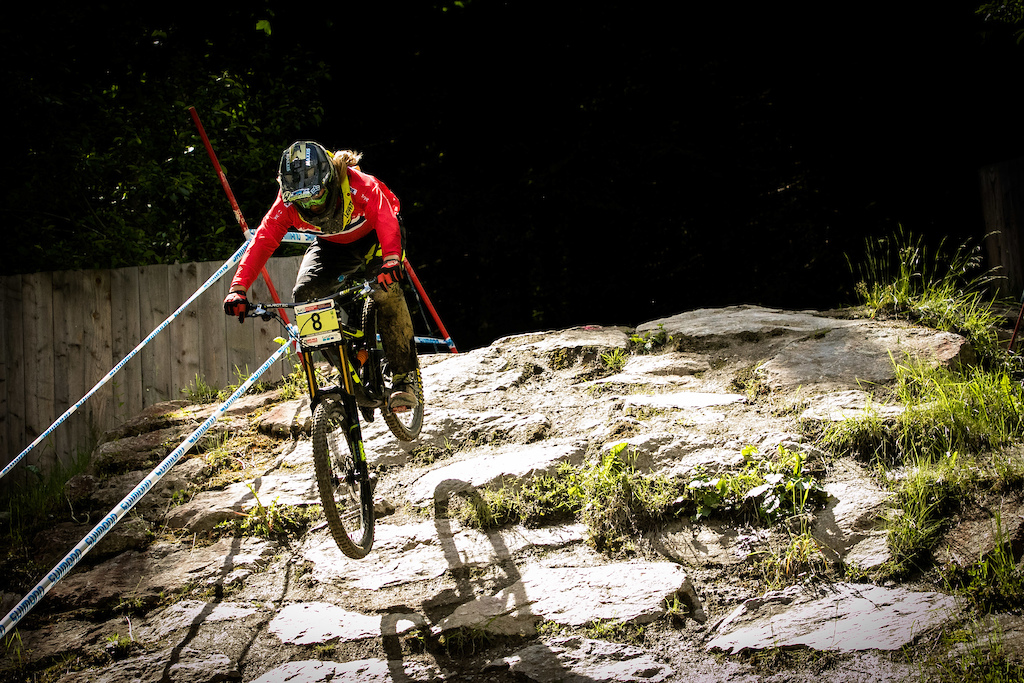 I'm from Mysen, which is a small town about one hour east of Oslo. It was natural for me to be a downhill rider as I was born in the flattest area of Norway. 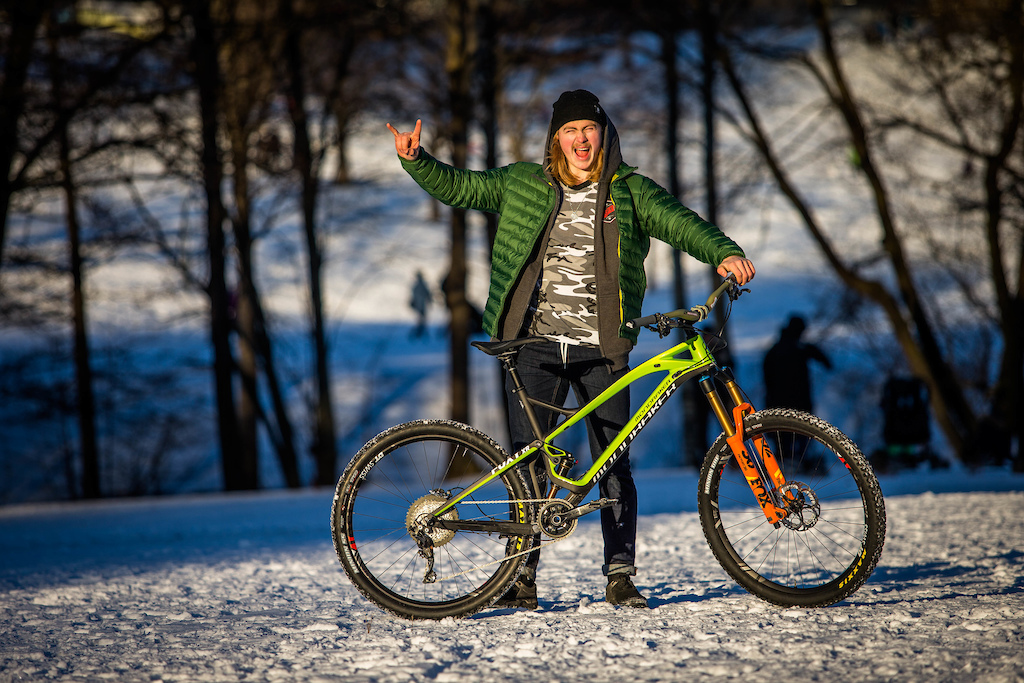 I'm always motivated and really love riding bikes and training above anything else. I would ride my bike just a much as I do now even if I did not do this for a living.

I do sometimes get hung up in the fun of shredding, which can affect my preparation for racing. #savetheberm 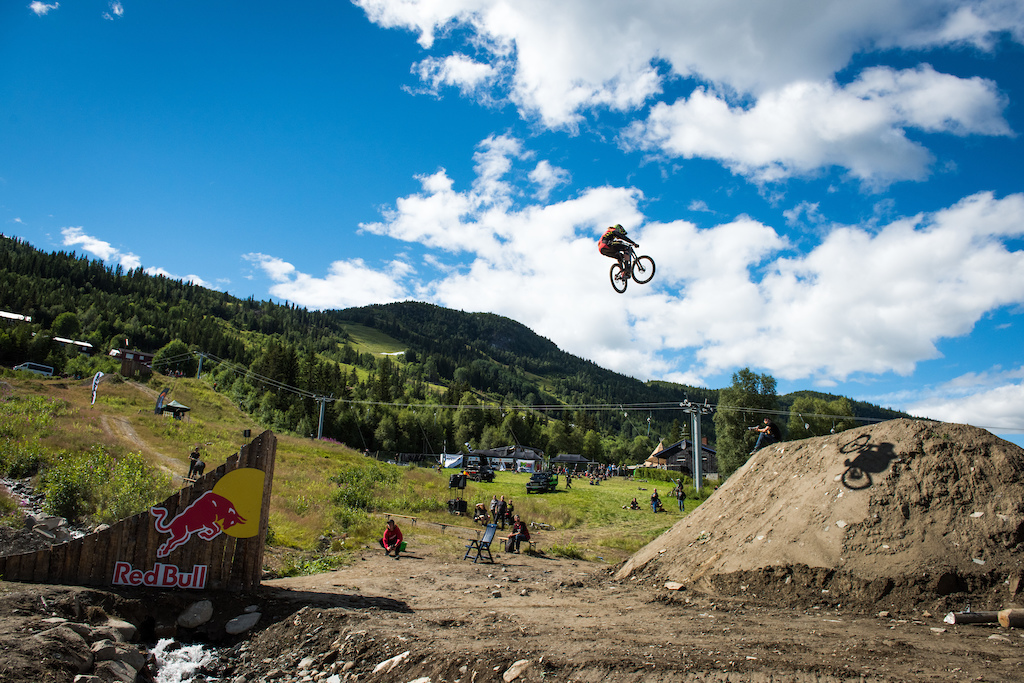 You were among the group of maniacs that rode at Red Bull Hardline this year. How was that?

Scary as hell, but insanely fun. The adrenaline rush I got there is second to none, but the nightmares of riding there start a month in advance. I felt really lucky to get picked out to ride one of the sickest courses in the world with some of the best riders out there. Thank you!

What was your favourite part of the Hardline course?

The cannonball step-down and the metal ramp that had the Jeep under it. The g-force and speed made me feel alive and close to death at the same time!

As a first-year junior, I over-jumped during the World Cup in Cairns and got two compression fractures in the vertebrae. Except for that, I broke my bike's headtube twice, once at The Fest Series - Hillbilly Huckfest in Ål and once during Red Bull Hardline in 2016. Both of those could have ended really badly, but I walked away from both of them.

Do you have any big projects or trips planned for 2018?

My main focus is racing all the World Cups in Europe.

How did you come up with the idea to start making '#B_Rage' Volumes?

I travel and experience a lot, besides, I love to edit, film and create things. It's almost like a meditation for me and I like to work on edits in between training and riding during off-season when I chill. With so much material on my phone and GoPro, I think its fun to share it with followers. Appreciate all the love!

I use almost as much time building tracks in the local woods in Mysen as I do riding them. I really enjoy having a plan, executing it and being able to ride it in the end. I also love making bike-related content for social media. 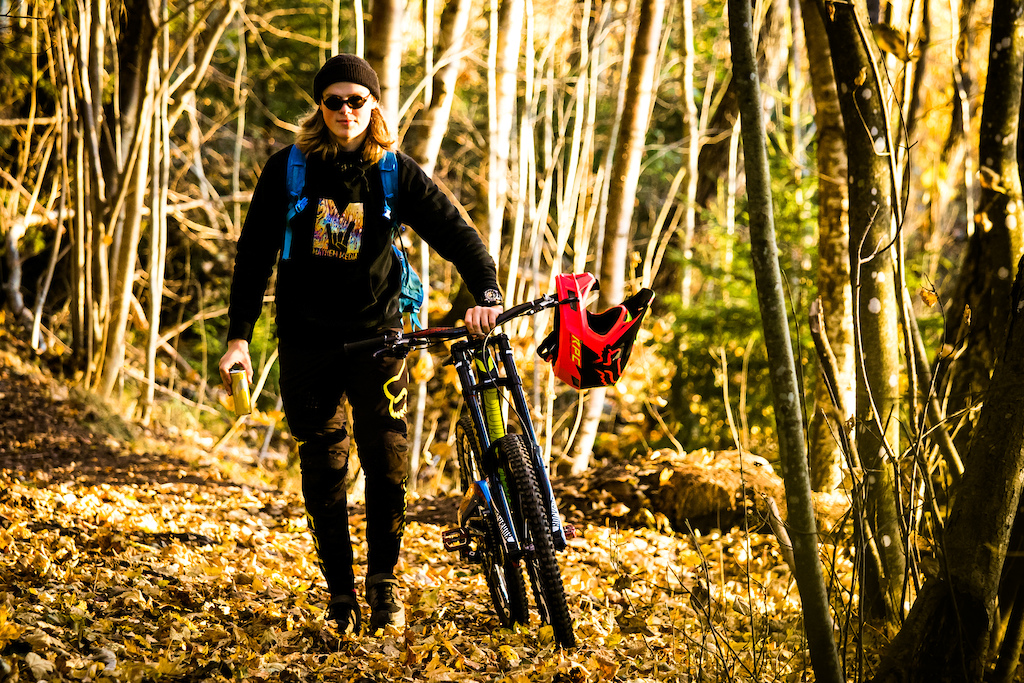 I get a lot of inspiration for my content and workouts from watching motocross, skate and Crossfit edits on YouTube, so its easily my most frequently used website. I love to see when people put their heart and soul into something and it flows well.

When shit I cant control kills my vibe.

Being able to do the coolest thing in the world for a living. 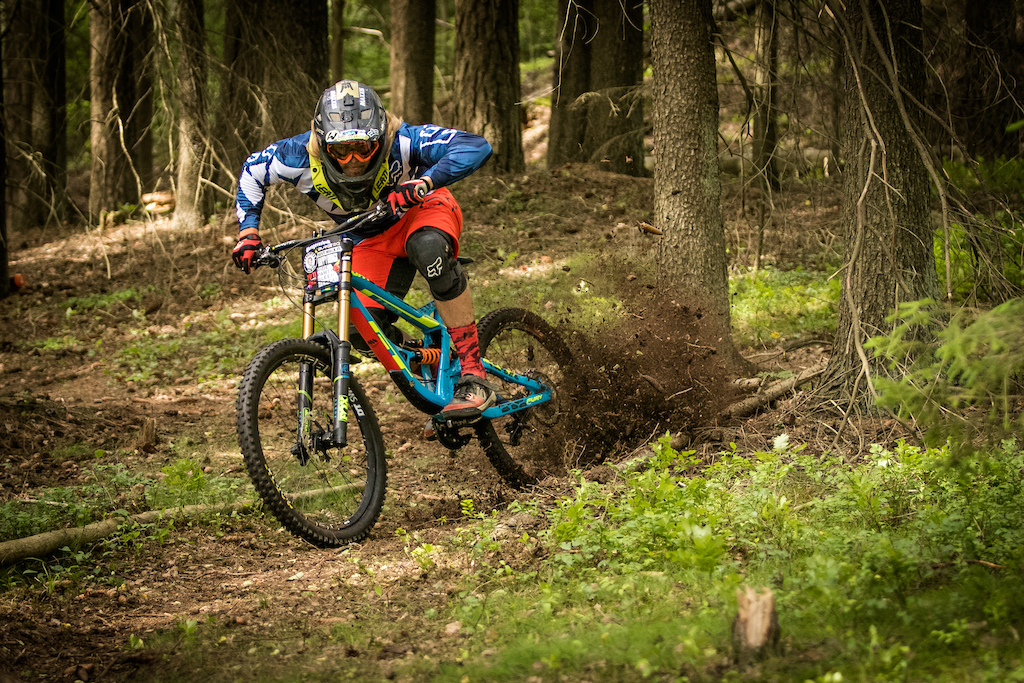 High School, so praise Odin that I’m doing this instead.

Where do you think the future downhill racing is headed?

Faster tracks, bigger wheels and an even more professional approach to training and preparation. But personally I prefer the old-school technical and natural tracks.

In the wintertime in Norway it gets completely dark at 15:00, so I try to get as much time shredding the snow early in the day, eat a big lunch, hit the gym, dinner, sleep and repeat. 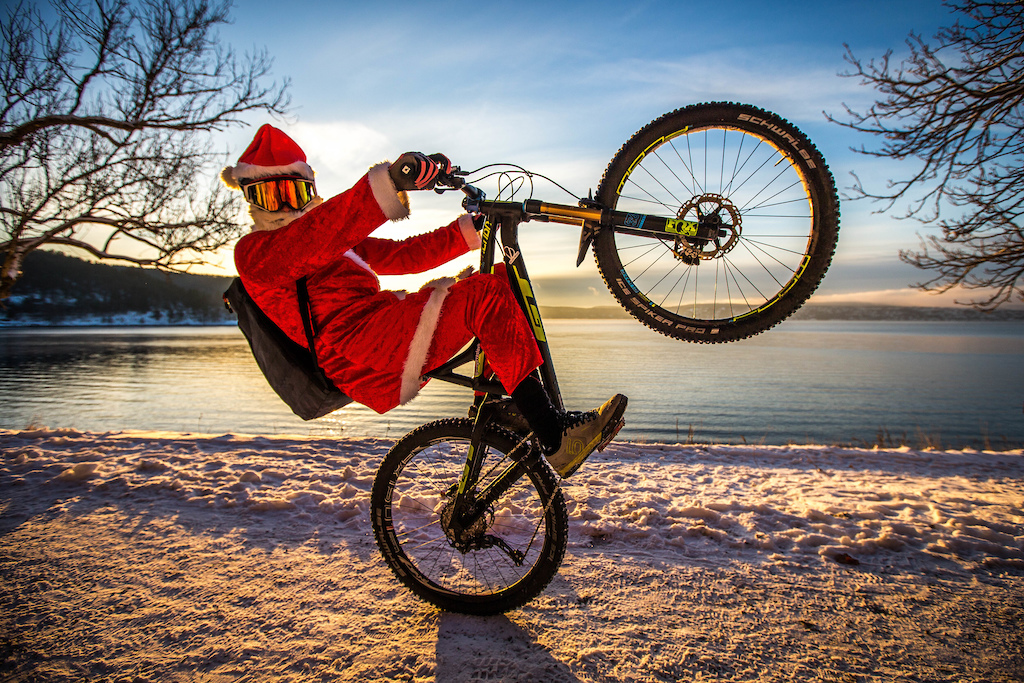 As the Viking that shreds so hard the tires pop off.

What does the future hold for Brage Vestavik?

Shredding bikes and having fun. Also planning to work my way up the World Cup ranks and living this life for as long as humanly possible.


Posted In:
Interviews Getting To Know Brage Vestavik

preach (Jan 20, 2018 at 8:16)
Always a trip when the whitest dude from the whitest place says that Gucci Mane is his inspiration.

vikb (Jan 20, 2018 at 17:18) (Below Threshold)
I live in a small town in Canada and we built a statue to Lil Wayne. If you are a true gangsta it don't matter the colour of your skin or where you live dawg! #thuglife #bikethug #reversecoconut

colinfurm (Jan 21, 2018 at 3:01)
Just so you know when his referring to high school he actually means university. In Norway it's call høyskole

CrimsonGrimace21 (Jan 21, 2018 at 12:09)
@colinfurm: Can confirm this Vikings preachings.
Source: American living in Norway and being very confused for much longer then I'd like to admit.

endlessblockades (Jan 22, 2018 at 10:34)
The question Pinkbike needs to ask every Viking: Varg or Euronymous?

endlessblockades (Jan 22, 2018 at 10:35)
@Skootur: Celtic Frost and the band they were spawned from, Hellhammer, were Swiss.

flipoffthemonkeys (Jan 20, 2018 at 10:06)
i used to be sponsored by douchebags, but i wasn't douchie enough, so they cancelled my sponsorship. douchebags. i love saying douchebags

thestraightline (Jan 20, 2018 at 8:42)
Excited to see both Brage and Zakka make it into solid teams this season. Go get them!

NinetySixBikes (Jan 20, 2018 at 15:39)
It's pretty confronting to read that somebody who's half your age is already being called "a veteran"


I use almost as much time building tracks in the local woods in Mysen as I do riding them. I really enjoy having a plan, executing it and being able to ride it in the end. I also love making bike-related content for social media."

Odin bless You. Trying to be on that way, even it's much harder for non professional mtbiker (maybe?!).

CALEBTNORMAN (Jan 20, 2018 at 21:37)
Fellas, please. Cody Kelly with the Barbie-do and ballerina-style riding has all the female boxes ticked.

pioterski (Jan 21, 2018 at 1:21)
Hopefully, he realizes this before it's too late. Some top WC riders do attend high school and race at the same time. It is doable.

fattyheadshok (Jan 21, 2018 at 22:04)
He lives in Norway. He’s going to get an education and no matter what job he gets in the future he will earn an actual living wage. Their system in no way resembles ours. Trust me.

grandersg (Jan 21, 2018 at 0:41)
This was a good reminder to hit the hillbilly huckfest this year. Anyone here ever been?

howsyourdad (Jan 22, 2018 at 4:49)
I saw this guy ripping around Järvsö in Sweden in the summer. Hopefully got a great future in front of him , lycka till

spankthewan (Jan 22, 2018 at 10:35)
Rad rider, but a raping, pillaging, slave-owning heritage is nothing to celebrate or build your identity around.

spankthewan (Jan 22, 2018 at 13:51)
@endlessblockades: That's why I don't go around flying the rebel flag and screaming MAGA. Those people are scum.

endlessblockades (Jan 22, 2018 at 14:04)
@spankthewan: Cool, we have a few of those here. At least 1 has barnacled to my PB hull and issues a Negprop everytime I open my yap.

thejake (Jan 20, 2018 at 17:14)
Great job pinkbike for an interview that seems to promote dropping out of high school when a large percentage of your viewers are in high school. I get it, high school is tough for a lot of people or maybe in Norway school is done at age 16 and “high school” is more like community college. I’m not a huge fan of higher education but meeting the baseline is a must.

yellowpurple (Jan 20, 2018 at 17:38)
You do realize that when your 18 you graduate high-school and you can also graduate early when you are in a sports program.. You can also do it online or from home if not.. What do you think every teen actor, Olympic athlete, hockey player etc does?

Santamtnbiker (Jan 20, 2018 at 19:01)
I agree. School sucks. Takes time away from biking. but you still need to at least graduate high school, cause what if your sponsors dropped you? You need something to get you a job until you can figure something out. And personally if I was a world famous mouintain biker I would find it a bit embarrassing to be asked if I went to collage or not and I had to say that I didn't even finish high school. But no offense, this guy seems awsome! And I love that name shred-Viking!

thejake (Jan 20, 2018 at 23:47)
@yellowpurple: if that is the case here please elaborate. Most people that graduate early are proud of it and don't talk about school like it's a burden.