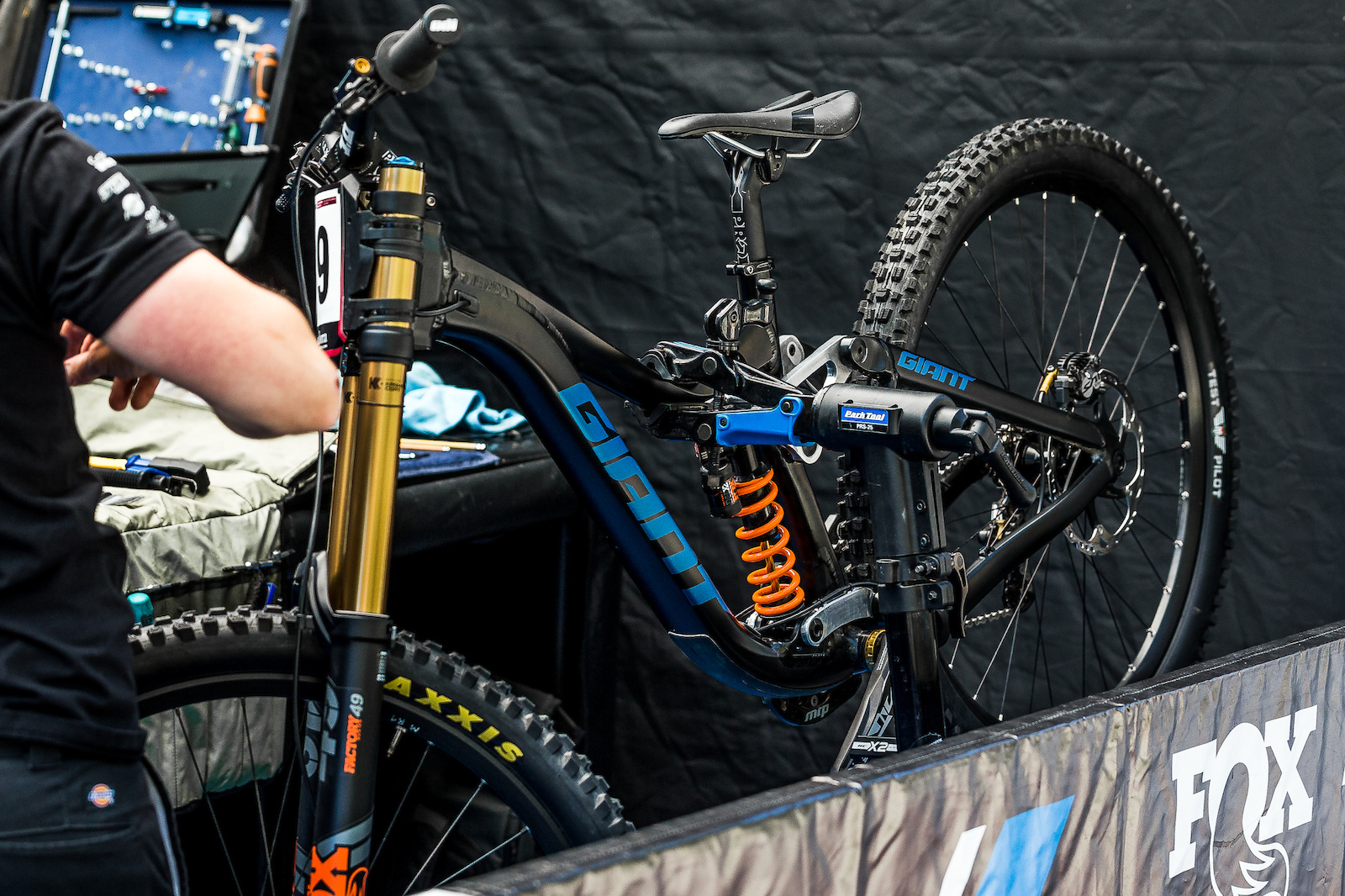 If you flipped through any of Giant's catalogs over the past handful of years, you might notice a distinct lack of 29ers, especially compared to most of their competition that has largely embraced big-wheelers. That's doubly true if you're looking at enduro and gravity bikes, with only 27.5" wheels to be found on their current Reign and Glory platforms.

Thing is, 29er (or mixed wheeled) downhill bikes look like the way forward and Giant, well, they don't have one of those... Yet. 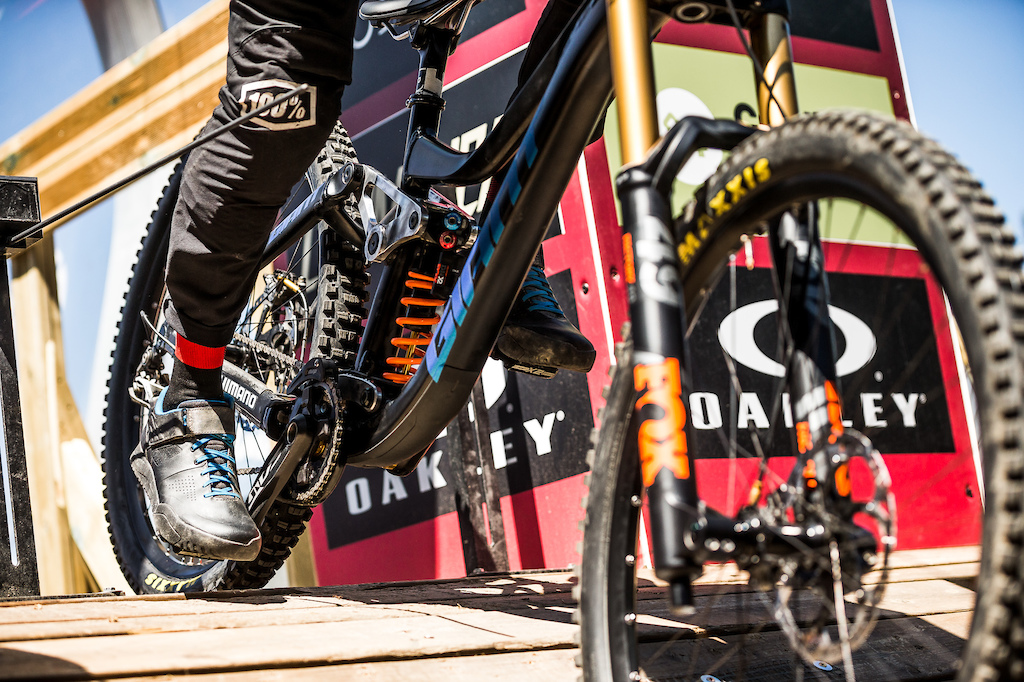 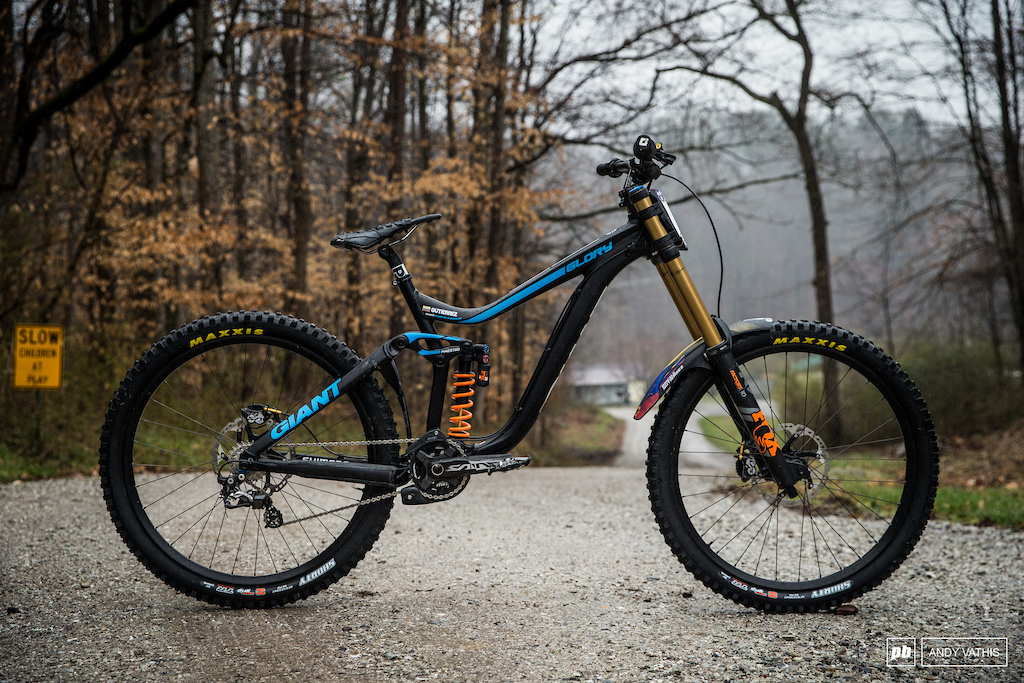 Spotted in the Giant Factory Off-Road pits at this weekend's Vallnord World Cup, this black and blue aluminum Glory was rolling on 29" wheels and had Fox's 49 fork installed. It doesn't appear to be a one-off prototype built specifically for big wheels, however, as the front triangle looks like a dead ringer for Giant's production aluminum Glory, tube shapes and all.

But do you know what looks very much not production? Those shiny suspension linkages, of course. The layout is still Giant's dual-link Maestro system, and the lower shock mount still does double duty as a pivot, but the team-only links probably correct the geo change from 27.5" to 29" wheels. And speaking of geometry, there's what looks to be a flip-chip system on the inside face of the rocker link at the seatstay pivot that would let the team change how the bike handles. There's no word on any specific changes to the suspension action, but that wouldn't surprise me, either. 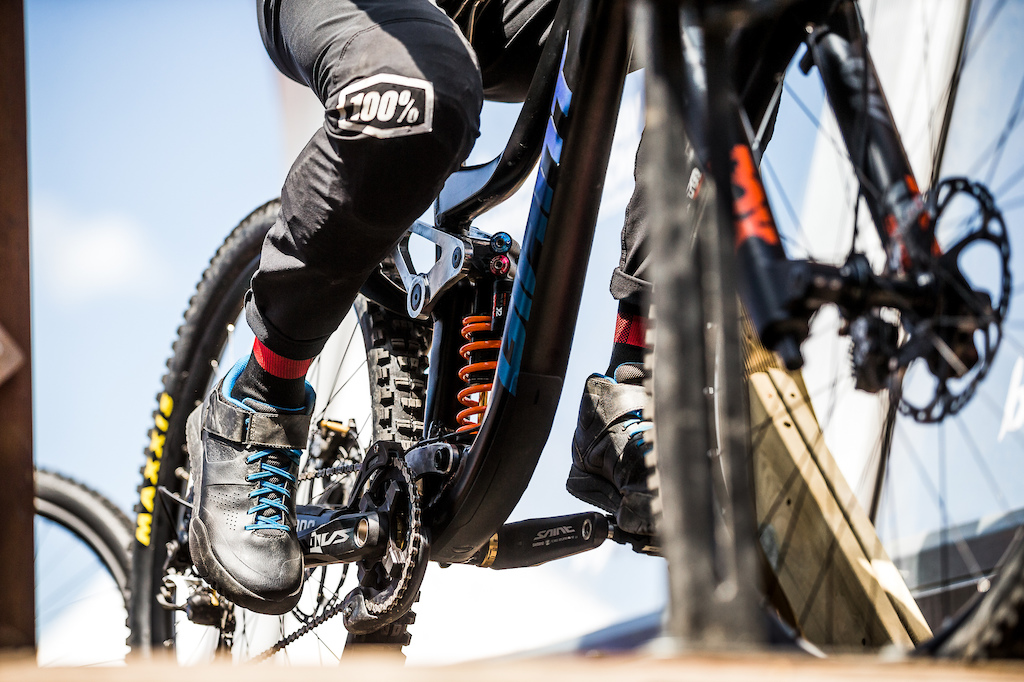 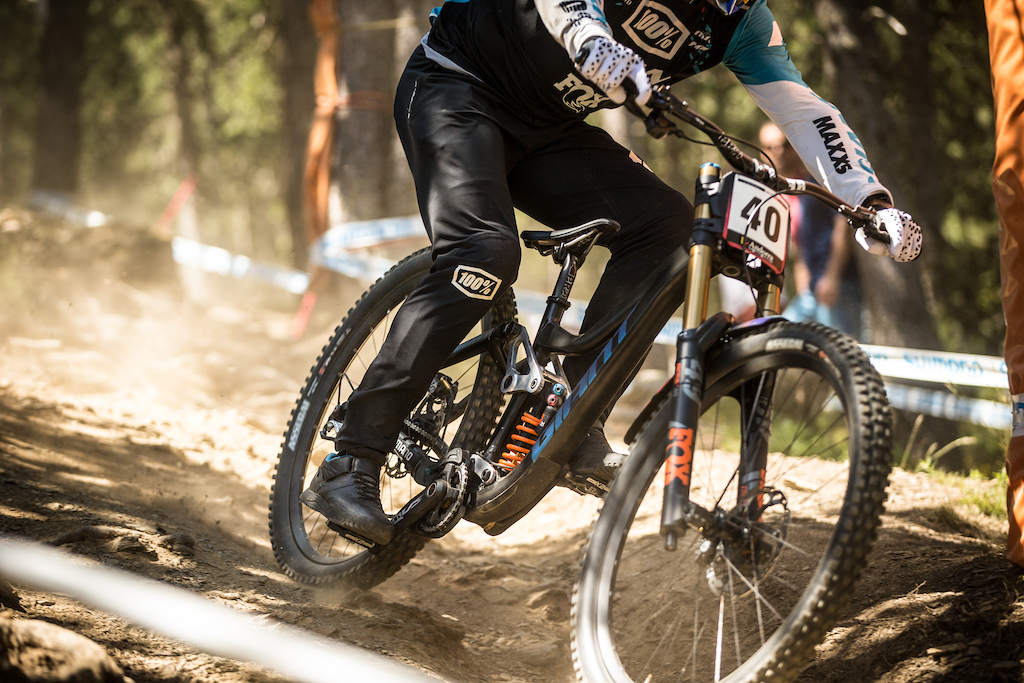 Companies go racing to sell bikes, of course, and there's no point in racing something that's drastically different to what customers think they're getting down at the local shop. It'll probably still be awhile, but don't be surprised to see a big-wheeled Glory in Giant's catalog.

Kenfire24 (Jul 4, 2019 at 16:46)
Only on Pinkbike do we complain about constant changes to bikes and standards while still trying to shame a company for not drastically changing their bikes every couple years. Why have the Reign and Glory not gotten a complete redesign? ..... Probably because they work really well and still sell. Giant is the biggest name in the game for a reason. That’s why they manufacture so many frames and components for their “competitors”.

MikerJ (Jul 4, 2019 at 18:00)
Yes. While I dig smaller brands and love my Knolly, I've got two Giants. A new 29 Trance and a 2015 Glory, and I can't say enough good things about those bikes. Though the 2015 Glory refuses to die and has held up perfectly it is getting "long in the tooth" with a lot of hard DH hours. So I've been sad to not see Giant saying much about its DH stuff. Just looked at their website the other day to see whats up with that. Then today - boom! There it is.... Hope they don't change too much to the current design.

jgainey (Jul 4, 2019 at 18:04)
I actually have to say the Reign could have used a rear suspension kinematics change as soon as it was released. Having the great ideal of the lower offset, but mated to a less than desirable dual travel fork was a bit counter productive. (I sold mine pretty quick)
That said I like the overall ideal of your post.

What are the sales numbers again? Big 3, then a range of D2C and mid range brands, then small and boutique brands.

lalientoxc (Jul 4, 2019 at 19:51)
I still have my Giant xtc 26” and it’s the best XC bike I have ever owed and all of my friends agree is the most comfortable bike they’ve tried. Also I haven’t upgraded because i don’t need to, my 26” still doing the job

bigburd (Jul 5, 2019 at 3:52)
I prefer companies that stick with a good design for a long time, rather than chasing for some unique design every two years, the Glory is a fantastic bike and there is no need for it to change at all.

ejopdahl (Jul 5, 2019 at 14:35)
I have only had a few dh bikes, two were giants (an old school faith then a 2014 glory). I really liked them but I’m biased clearly. What were your favorite bikes and why? My only other dh bike was a banshee legend but the suspension was not set up well for me and I didn’t have the time or money to fix it so moved on. @pargolf8:

pargolf8 (Jul 5, 2019 at 15:02)
@ejopdahl: id say my favorite was a pivot but that was also a 26er haha. Wasn’t a big fan of the session. Really liked the kona operator. With all that said im definitely getting a transition tr11

krashDH85 (Jul 5, 2019 at 15:17)
@ejopdahl: sorry but this is BS. If you can't set your suspension up and you are blaming the bike, that's your fault. I ride a Legend, one of the best DH bikes I've ever owned with a great suspension platform.

Time and money to fix it? Sounds like you need a new sport. No money involved to set it up correctly.

ejopdahl (Jul 5, 2019 at 21:05)
Lol f*ck off. Had a dorado which would wallow and dive in the midst of its travel so it needed to be re shimmed for a heavier rider. That coupled w a custom tuned shock for a lighter rider caused tons of bottom bracket hits + during steep rocky sections the rear wheel would move back tremendously,(2 inch rear axle path) causing the sensation of shifting my weight forward. That plus the divey dorado + it was a bit on the small side was a recipe for otbs. I didn’t have money to fix these things and could easily sell it and get another used rig that was already better suited to me. Not saying the legend is a bad Bike, I know how to turn knobs, just couldn’t make it right for me without investing in it. Don’t know where the hostility is coming from. Lmao @krashDH85:

obliquemountain (Jul 4, 2019 at 16:46)
I honestly think Giant is gonna have a great year. I predict 29er Reign and hopefully longer travel Trance. Having ridden a long list of bikes, the Maestro suspension still sits high up there and the price is hard to beat.

jgainey (Jul 4, 2019 at 19:43)
You should really Reign in your Giant compliments a little as you have us in a Trance. I mean really leave a little room for another PB comments to have some Glory.

jaame (Jul 4, 2019 at 22:35)
@Bflutz625: I was going to link it but I it looks to have disappeared @clarkeh maybe they told him to take it down.
Giant is his employer, not his sponsor. He’s a golden boy over here. I don’t think he would get sacked over such a post.

jaame (Jul 5, 2019 at 5:21)
@irck: when I saw it I just assumed it must be because I am kind of aware the reign 29 is imminent. I didn’t look carefully because I’m not that into giants. Why he would be just getting a trance when they’ve been out for a while is a mystery. Maybe because he wants a 29er and the reign isn’t ready. That’s pure speculation on my part.

JamesR2026 (Jul 4, 2019 at 18:16)
I reckon that flip chip might be intended for wheel size adjust rather than just to tune BB height. Mullet bike capability will become an important feature in the next few years.

Ktron (Jul 4, 2019 at 18:42)
Definitely seems the way things are heading. Next logical step down this adjustability path.

andydhteam (Jul 4, 2019 at 16:54)
So I guess all the rumours about them discontinuing the glory were false

Aptlynamed (Jul 5, 2019 at 2:23)
It is just marketing. Here an ex-engineer explains how it works in the bike industry

jamdwan (Jul 25, 2019 at 2:33)
My 2019 Reign 2 is amazing. Went up from the 2017 Trance 2. everybody was saying.... it will struggle to climb, won't handle as well......... Well, totally false info, climbs better than the Trance and on downhills and bike parks this thing blows me away. Looking forward to launch next month of the entire range. Also has anybody seen the colour of the 2019 Reign Advanced 1 Frameset in blue that is available.. Seen fully built up in shop and the colour is the best i have seen in person hands down!!!! www.giant-bicycles.com/us/reign-advanced-frameset

kmsafety (Aug 3, 2019 at 22:07)
Agreed: my 2015 Reign Advanced 0 climbs awesome. Additionally, it handles tight single track exceptionally well and I’ll never be able to fully take advantage of its downhill prowess and capabilities. The bike is built with high end parts and weighs 28.5 lbs!

This bike has changed the way I will shop for bikes in the future, e.g., been eying the Pole Stamina 140.

PocoBoho (Jul 4, 2019 at 16:28)
Giant - the Toyota of the bike industry. Nothing fancy, flashy or ground breaking. Just a solid and dependable ride.

Bflutz625 (Jul 4, 2019 at 16:32)
@PocoBoho: I actually like Giant. Although their geometry is kinda... meh at best they make solid bikes with no questions warranty policy and at a price that competes hard with D2C companies.

humoroususername (Jul 4, 2019 at 16:33)
@PocoBoho: Toyota... Creator of the Prius and Mirai. Those are probably the two most groundbreaking cars of the last 50 years. Definitely the Prius anyway.

I see what you are getting at though.

zyoungson (Jul 4, 2019 at 17:03) (Below Threshold)
@PocoBoho: big call, I would say giant is more like GM, cheap & nothing particularly special but does the job

promdi (Jul 4, 2019 at 17:46)
@CircusMaximus: totally agree! Bought the 2019 Reign advanced frameset thousand lower than the "they are everywhere" other bike brands

Didn't know anything about geometry, suspension or components, but knew the Giant would be a dependable, reliable bike that would get the job done and I could just concentrate on learning how to ride.

Loki87 (Jul 4, 2019 at 16:30)
That was rather anticlimactic.
New bike releases get kinda boring these days.
I guess that´s a good thing for my wallet.

Cheeky-Greeky (Jul 4, 2019 at 16:42)
Giant and DVO parted ways at the end of last season and Giant partnered with Fox at the start of this year. That's why there is a Fox 49 on it, not cause DVO didn't make an Onyx 29er.
Below threshold threads are hidden

blackthorne (Jul 4, 2019 at 20:55)
How Dare you mention that name while standing on the shoulder of Giants?
Post a Comment