Join Pinkbike  Login
Is it Groundhog Day? 2020 isn't over yet and it's with great trepidation that anyone would say things are looking up but... there are some things worth celebrating and, of course, not everything has been smooth. Here are some of the good and not so great happenings in the mountain bike world that occurred in August 2020.

Crankworx Makes the Best of Things

Crankworx Summer Series does racing in BC.

Crankworx Whistler couldn't take place in August as it usually does, with an international roster and thousands of fans, so the organizers came up with an alternative. The Crankworx Summer Series was an athlete-only invitational comprised entirely of athletes that live in BC. 25 riders competed in four disciplines (Downhill, Dual Slalom, Enduro, and Air DH) at three different locations across the province in a made-for-TV format with no spectators.

There were live broadcasts, event highlights, weekly recaps, course previews, bike checks, tech roundups, and more... It was also pretty cool seeing some venues we haven't seen used in quite some time such as the legendary Mount 7 Psychosis course. The event was a success and Crankworx just announced they'll be running at similar format in Innsbruck at the beginning of October. 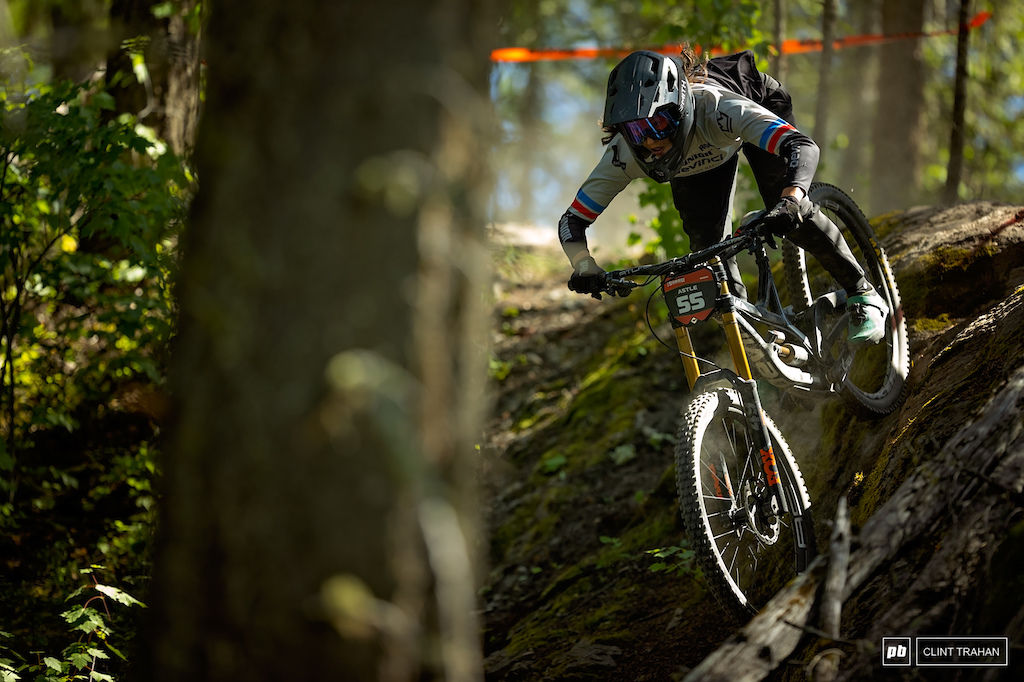 BC athletes raced across disciplines for the Crankworx Summer Series.

Racing means testing... and then there's a Field Test.
Companies typically use their top athletes to test new products and international races are where those products are typically seen for the first time. With no racing and companies postponing launching new products, spotting and speculating on new gear (one of our favorite things) has been a challenge.

With racing starting back in various locales including the Crankworx Summer Series, various National events, and the EWS at Zermatt, the tech we've been craving is finally starting to reappear. Additionally, while I can't say anyone was craving seeing a solid week of "Lycra Levy", we got the down-low on the latest downcountry and cross country bikes with the XC field test. 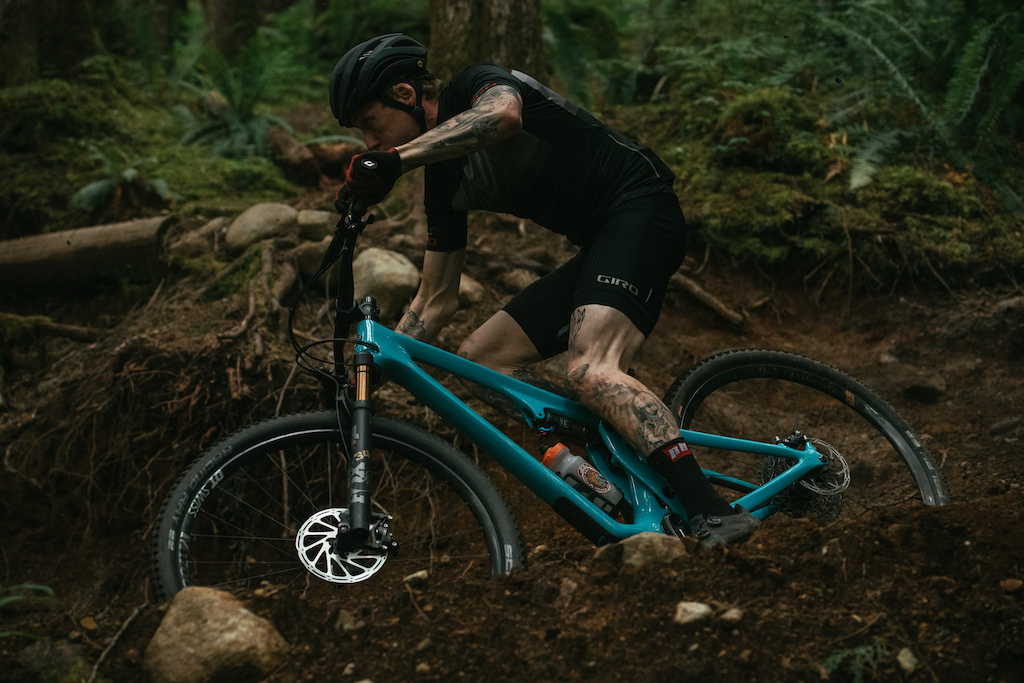 Bergemann joins the RedBull crew.
Hannah Bergemann is a freeride sender based in Bellingham and a legend in the making. Her riding speaks for itself, but her humble attitude and stoked nature go far beyond her big sends on the bike.

In a time where so much is up in the air, it was great to see Jill Kintner and Michelle Parker surprise Hannah Bergemann with her Red Bull helmet in front of the Transition office, where she works on the marketing team. We can't wait to see what Bergemann and Red Bull accomplish together. 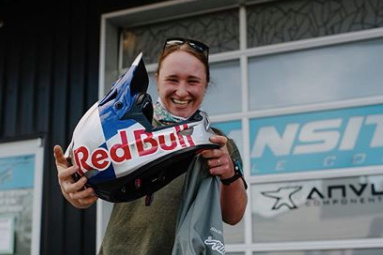 All the stoke and a RedBull helmet.

Pierron, ALN suffer hard crashes.
Amaury Pierron had a serious crash during his French Nationals finals run on a jump in the top fast section of the course which could see him miss the rest of the season. Pierron suffered a broken collarbone, dislocated finger, and L2 and L3 transverse apophysis.

Andreane Lanthier Nadeau had a mishap in Zermatt with a crash on the Shakedown day ahead of the EWS. The Shakedown takes place on a trail that's not part of the race route and allows riders to get a taste for the terrain of the venue without gaining the advantage of riding the stages before practice. Andreane was lucky to walk away with just stitches in her hip and elbow after she was bucked at high speed onto some sharp, rocky terrain, but she was unable to race due to the extent of her injury. 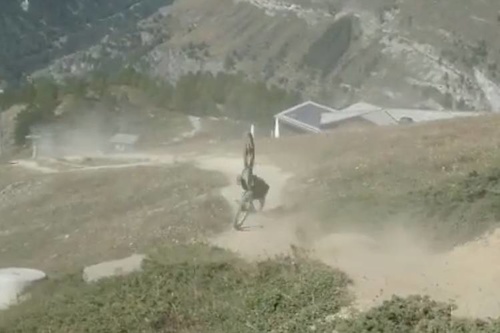 Homes are lost and many are displaced during horrific fires.
It would be amiss not to mention those in the Santa Cruz area, and elsewhere, who have been impacted by the recent forest fires. While the situation is by no means isolated to Santa Cruz, that area, home to many in the mountain bike industry, has been ravaged in the last couple weeks by a number of fires resulting from a freak lightning storm. Nearly 800 homes and structures, just in the Santa Cruz area, have burned.

Among those who have lost everything are a number of mountain bikers and people in the bike industry. Santa Cruz Bicycles employees have been hit especially hard with dozens displaced and several losing their homes.

With Cal Fire resources stretched thin, many locals (including some mountain bikers) defied evacuation orders and fought the fires themselves, saving a number of homes. Santa Cruz Bicycles have set up a fund to help their employees and there are a number of other resources in place where people can contribute to help locals if they want. 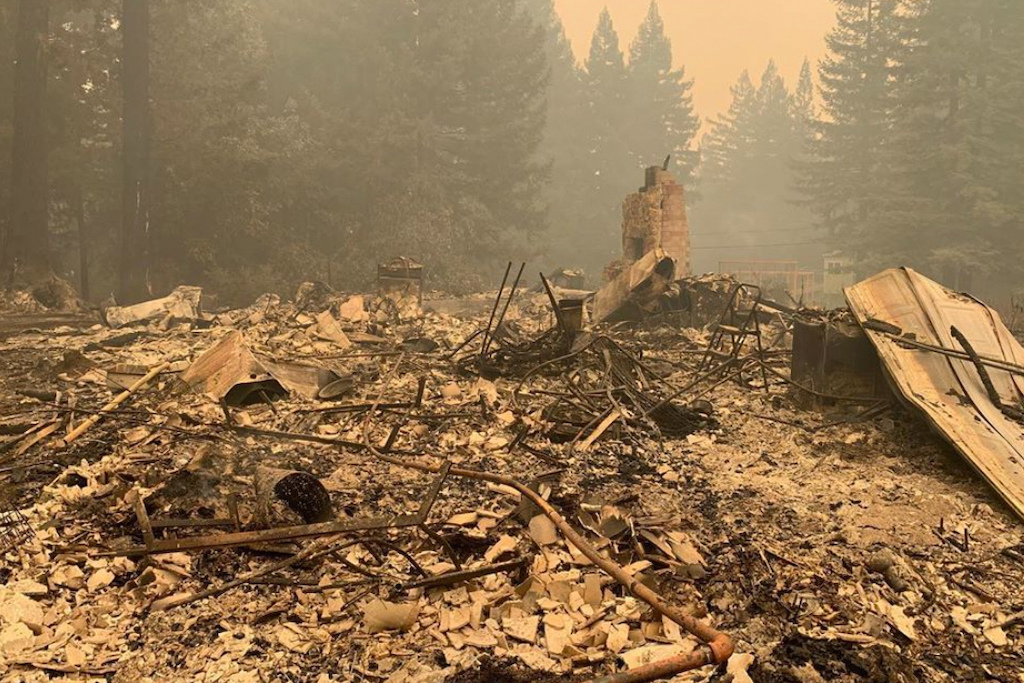 SCB employee Garen Becker, his wife, and newborn along with many others lost homes.

pensamtb (Sep 2, 2020 at 4:13)
Guess the EWS deserves an honorable mention for pulling off the first somewhat international racing event in the most adverse conditions, both in the context of the conditions on the ground (weather) as well as the global pandemic.

I appreciate that the W in EWS should read as "the part of the world that is currently allowed to travel without restrictions", but having been on the ground and having raced the event myself, I tip my hat to Chris and his team for putting on the best event possible given the restrictions and conditions.

coop08 (Sep 2, 2020 at 6:58)
I feel like this is not being addressed as much as it should. I understand there is not much of a way to know when component/frame manufacturers will catch up or return to somewhat standard operations, but it seems like a conversation that has been missing amongst everything else.

nskerb (Sep 2, 2020 at 7:12)
It kind of sucks but also shows that the market is pretty hot and doing good right now. I saw this as I managed to stumble upon the last possible in stock model of bike I had my eyes on. So I'm not too bitter.

Unrealityshow (Sep 2, 2020 at 8:44)
@nskerb: I don’t think it’s just the market driving this. Supply chains in every industry are destroyed right now.

zaalmondjoy (Sep 2, 2020 at 9:33)
@coop08: The problem is that when COVID hit, manufacturers were ordered to shut down just as retailers were. And with the constant flip flopping by political figures on the severity of COVID, no return to normalcy has been made or will be in the foreseeable future. It sucks bc in reality we are probably a good year away from standard industry inventory levels to return, but the more these corrupt politicians manipulate the crisis for their agenda, the longer we wait.

RonSauce (Sep 2, 2020 at 12:10)
@zaalrottunda: You are wrong. Most production has got back and running, the issues are all with tariffs. Nobody knows what its going to cost to move metal goods across borders. Take it from a guy who is sitting on 2 tons of aluminum and babysitting the market. Obviously there was more demand than stock on bikes, but that is only part of the problem. Home gym equipment is in the same boat.

coop08 (Sep 2, 2020 at 14:15)
@RonSauce: this is a really interesting point. That is the type of additional information that I would not immediately consider into the equation without there being a dialogue about it.

zaalmondjoy (Sep 6, 2020 at 14:03)
@RonSauce: Hey I mean, I'm in the industry so unless all of my suppliers/vendors are lying then ya, you're right I'm wrong. I'm just telling you from experience that companies like Giro, Bell, Crank bros, and more that were wiped out in the initial demand push have yet to return to their normal pre-covid production rates. Glad you have a ton of metal but I'm not sure how your esoteric/subjective experience invalidates my observations? The tariffs have an impact sure but that doesn't affect their ability to produce, just their potential return.

Nope just metal goods being held up. It doesn't matter that you are "in the industry" its a larger than bikes problem, but keep that tunnel vision. There are us companies making domestic steel workout equipment that were able to retool and completely change their production to meet a hole in the market, but apparently established companies can't get up to production? Why do you think they can't get to "pre-covid production levels"?

I'll give you one guess.

zaalmondjoy (Sep 7, 2020 at 10:49)
@RonSauce: Ok so because there are tariffs affecting this issue somehow that makes my point about the lull in production and delayed return to normalcy invalid? What are you smoking bro? cuz I want some

Gravity-Fiend (Sep 2, 2020 at 3:05)
To everyone hurting in CA much love for Victoria. there are brighter times to head. stay strong.

reindeln (Sep 2, 2020 at 8:04)
I noticed this too. He really didn't have many good things to say about the SB115 in the field test, but it's in probably 4/5 thumbnails that reference the field test.

kcy4130 (Sep 2, 2020 at 8:44)
@reindeln: Perhaps giving yeti some free publicity to lessen the chance of hard feelings from the poor review. Or maybe the review can across as a little more negative than was intended, so they're trying to make up for it. Just a guess.

reindeln (Sep 2, 2020 at 9:43)
@mph51: Zing! Haha actually I think pinkbike addressed this in one of their podcast episodes. They said they would love to be reviewing Evil bikes, but Evil never sends them anything.

brianpark Mod (Sep 2, 2020 at 12:12)
Levy definitely doesn't do the video thumbnails. I'm pretty sure Jason chose the SB115 most often because it pops.

Alta0 (Sep 2, 2020 at 11:12)
I think a little more transparency from the bike companies would be nice as far as how inventory is disrupted when it comes in. I have a yeti SB150 on order from my LBS and they are pretty good but they can only go on what yeti tells them. We are trying o plan a fall trip and it centers around when that bike shows up. I just saw jenson has them for order with deliver early October. Are the large distributors getting product first or is it that they put an order in before other places? I wanna support my shop but if a different retailer gets it significantly sooner, I might go with them. Hard saying not knowing.

wibblywobbly (Sep 2, 2020 at 5:13)
This. Very much under reported by the bike media but this is a huge problem. Guess we don’t want to scare away any new riders. The supply chain in all kinds of messed up.

Times like this is why you are a regular customer at a good shop - they aren’t going to extended the extra effort to get stuff for the guy who bought a rail trail bike two months ago like they will for the guy who is in every few weeks getting parts and service for his new every year XO1 bike.

Unrealityshow (Sep 2, 2020 at 5:24)
@wibblywobbly: Unfortunately my LBS hasn't been able to get parts any faster. They still let me in before they open so I can get what I need if they have it.

TannerValhouli (Sep 2, 2020 at 6:00)
One of the dealers for my shop (very large brand at the forefront of mtb right now) doesn’t even have their dealer plan for 2021 made up at the moment since they don’t expect to have any bikes

G852grant (Sep 2, 2020 at 8:07)
My Ibis dealer wont have my Ripmo V2 frame that I ordered in July until sometime in November. First time customer with them, and a big bummer.

pb-kg (Sep 2, 2020 at 4:58)
Crankworks was sick. Fun to follow some high level racing for a few weeks.
Below threshold threads are hidden

digitalsoul (Sep 2, 2020 at 7:06)
Bad month when Specialized can drop a new Demo and Pinkbike totally ignores the release. Pinkbike is too busy trying to push a new lame ass marketing term instead of actually following new product releases.