Join Pinkbike  Login
New Santa Cruz Syndicate member, Greg Minnaar, had a chance to check out his new digs with a trip to Santa Cruz in February. Being welcomed to the Syndicate 'family', he was made to feel right at home (and informed that once you join the 'family', you never leave....).Greg arrived into Santa Cruz fresh off a holiday ocean cruise, and with a bit of a rough adjustment to the wintry weather, the tanned South African got his first chance to ride a Santa Cruz with Jamie Goldman. At day's end, somehow Goldman ended up with a cup of hot chocolate as Greg washed Jamie's bike. After a busy first day, with a proper Mexican meal filling his stomach, the jet-lagged Greg got some sleep for the next day's activities. 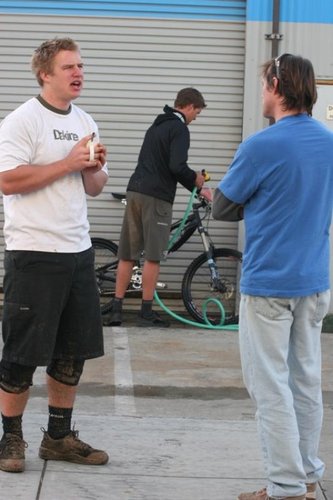 Working at the bike wash?

Visiting the Santa Cruz factory, Greg was impressed. "I didn't really expect such a big operation. It was great to see such happy people working there being involved in making quality bikes. It was a happy vibe," said Greg. At the factory, Syndicate wrench Doug Hatfield, had Greg's new V-10 and Blur LT pimping. Greg was very pleased with his new steeds and says this about the V-10, "It's great, very responsive in the corners, it feels brilliant, and has a wicked paint job!"


After checking out the bikes, Greg had to get his 'Blue Steel' on as he was primped for hours of photo shoots for ads and catalog shots. Barely revived with a sushi dinner, Greg conked out on the studio floor at day's end. "Things were pretty much as I expected for my visit, but I just didn't think I'd be doing as many photo shoots with Forrest!" said Greg. 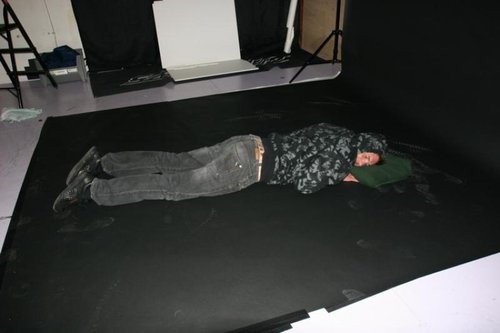 After a few days of photo shoots and video interviews Greg got a chance to go for a cross country ride. It was one of the first rides that he has done since his shoulder surgery in November. He was very cautious and tentative, but said it felt great to get out on the bike. Greg also got to the local gym to do some workouts and shoulder re-hab and was enjoying his time.

The weekend was spent with a trip into the city of San Francisco with his new family (Santa Cruz Bicycles owner Rob Roskopp and wife Lepa, and Syndicate manager Kathy Sessler), and the group stayed at Lepa's family home with her aunt and uncle. Now the term Syndicate 'family' was starting to make sense.... and there didn't look like anyway out! Greg was a great sport and the group enjoyed a wonderful meal at a Cuban restaurant after a shopping trip in the city.


After a relaxing Sunday filled with backyard bocce ball, basketball, Jacuzzi and a BBQ, it was back to work on Monday with more photos shoots. Fortunately there was enough time to go for another cross country ride with his new boss. Soon it was time to pack up and head back to the sunny climate of South Africa, and being bumped up to business class on the way made a perfect end to a wonderful introductory week to the Syndicate. Greg says, "The best part of this trip was getting to know Rob, Doug and Kathy better, and the sushi dinner!
I'm looking forward to a good season with wonderful support from the Syndicate, and it will be nice to have such a big range of quality bikes in my garage!"

evancam (Feb 19, 2008 at 19:33)
Wait a minute - wasn't there an article on Pinkbike a couple of weeks ago about how Minaar was going to be riding a V-10, but for Team Gamut? When the hell did this happen? UCI should just save the money and the Syndicate the injury risk and just take the podiums now, in anticipation!!!!!

ilovelithgow (Feb 19, 2008 at 17:52)
maybe they don't beat SH, but they'll give it a go, and none of their riders have SH's vacant, shark-like steel eyed look all the time. Syndicate's got personality.

SonOfSpooky (Feb 20, 2008 at 10:17)
This years worlds are gonna be sick!!! I can't wait for Fort Bill! No one has mentioned Commencal, you can never rule out the Athertons! What a year this is gonna be Sam Hill, Nath Rennie, Grey Minaar, Peaty, The Bearclaw, Athertons and Scotlands very own Ruaridh Cunningham!!!

morewhitenoise (Feb 21, 2008 at 8:56)
this reads like an article out of hello magazine or something. you could quite easily replace greg minar with 'paris hilton' or some other mainstream celeb, didnt realise the mtb world stalked its champions.... lol

hawthorn (Feb 21, 2008 at 9:49)
yeah people seem to be forgetting Miami Bryce Josh Bryceland he is a formidable junior and i can see him taking the junior worlds this year good luck to Ruaridh Cunningham too roll on the 2008 world cup series

fhrider (Feb 19, 2008 at 16:55)
oh god this is great having greg minaar on the syndicate team this year they are going to own world cups all over the place, its ganna be awesome. good choice santa cruz!

photoride (Feb 20, 2008 at 9:58)
what about chain reaction intense not going to be as good as scs but still a major team

downhillpete (Feb 20, 2008 at 7:53)
they've also got josh bryceland riding for them in the junior section